March 12, 2019 by Marta Rivera
Begin the brine 12 hours in advance or overnight.
Get Recipe
278Shares 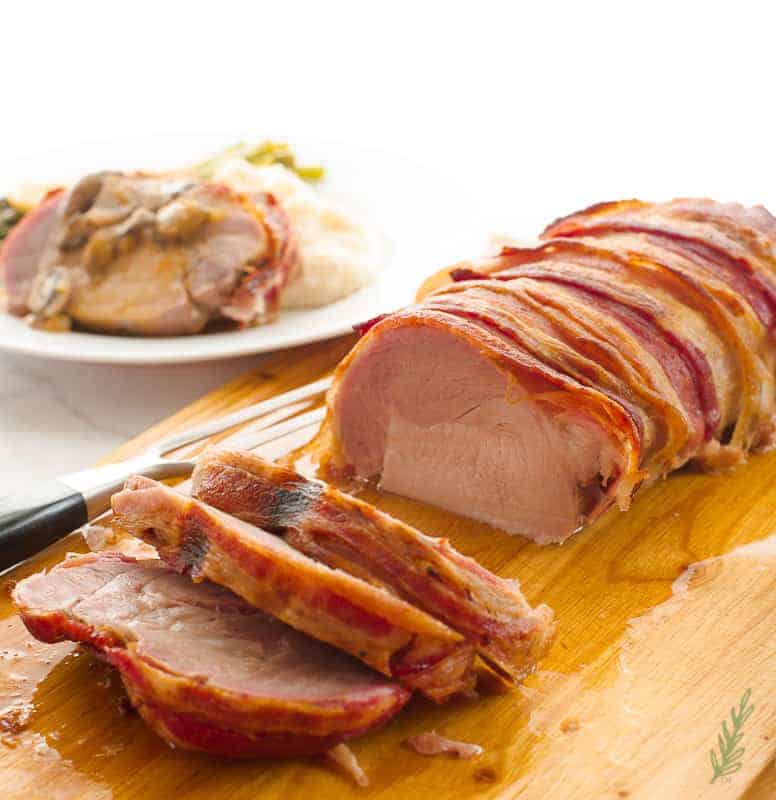 I believe that Sunday dinners should be a big thing. You don’t have to have a large family (or even be a family) to do Sunday dinners- you just need people you love to join you. As a military family, we’ve spent our fair share of Sundays apart. Now that retirement is looming, I look forward to not having to live through that again (hopefully). In spite of that, I can also appreciate the fact that not everyone is in the same position. Hence, my earlier statement about you not having to eat with “family”. Create your own tribe and invited them over for this. “This” was last Sunday’s dinner: Bacon-Wrapped Brined Pork Loin with Mushroom Gravy. If you know the Soldier, you know he was all about this. 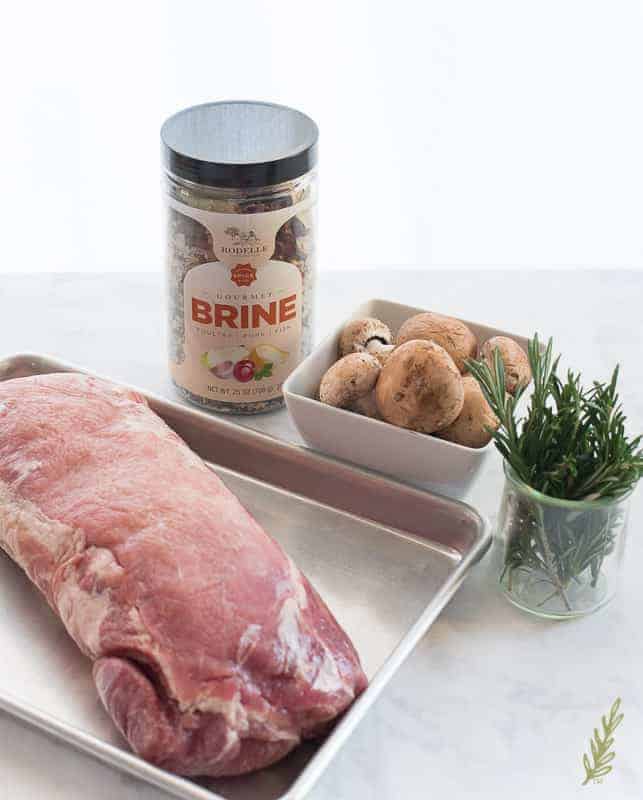 You’ve probably heard of brined turkey or chicken, but surprisingly enough, most meats, poultry, and even seafood, can be brined. Brining is the process of saturating a meat with flavor to season it and help it stay juicy. You’re basically forcing the salt and flavorings into the meat by submerging it into a heavily salted liquid. The meat has no choice but to absorb all of that flavor. After peeking around the internet, I stumbled upon Rodelle’s Gourmet Brine. It, naturally, seemed like the perfect substitute to my homemade (read: labor-intensive) brine of yore.

A six pound pork loin (thicker and meatier than its smaller tenderloin cousin), rosemary, mushrooms, flour (for the gravy), and bacon, of course, are all you need to prepare this perfect Sunday meal. Serve it with mashed potatoes and lemon-garlic asparagus, as I did, and dinner is easy and ready in an hour flat (not including the brining time).  Not bad for a flavorful meal like this, huh? 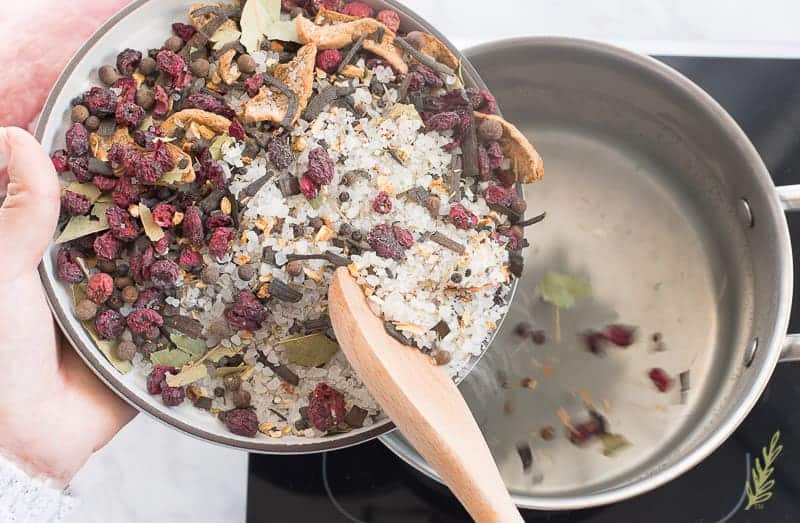 As I mentioned before, I used to make my own brine. While it wasn’t difficult, it was tedious. Blending everything and measuring stuff out that I knew I was going to discard (after brining) was just annoying. So, when I found this ready-made brine, I was sold.

Just looking at it made me happy. It looks like something I’d put on display in a fancy potpourri bowl. That’s how I knew I’d be happy with the flavor it was going to give my bacon-wrapped pork loin. I mean, really. Just look at it! Dried cranberries and apples, bay leaves, allspice berries and peppercorns? Hellz yeah! This brine also contains exhausted vanilla beans! Who has those in their brine? I know I didn’t, but I do now! Exhausted vanilla beans are just beans that have been used in the making of vanilla extract. Since Rodelle is known for quality vanilla bean products, it makes perfect sense for them to recycle their used beans to maximize flavor in other recipes.

So, to create the flavorful brine, I brought six cups of water up to a boil in a stockpot. Once the water was at a rolling boil, I added one cup of the brine mixture to the pot. I made sure to take out a couple of tablespoons from the container before shaking it up well. This was to make sure all the spices and herbs were dispersed throughout the brine mixture. Once I added it to the boiling water, I turned the stove off and let it steep for about five minutes.

The container gives you a guideline on how much brine to use for the amount of meat you’re planning to brine.

Why You Have to Chill 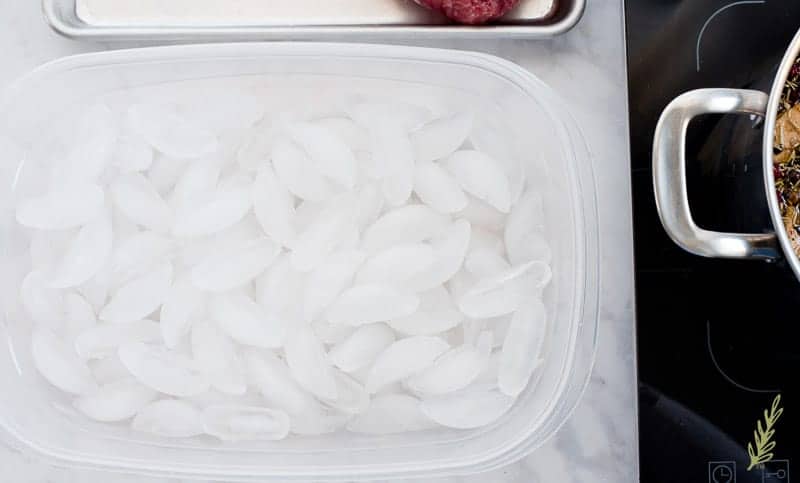 Well, you need to chill partly because you don’t want to die of a heart attack; but, in the case of this bacon-wrapped pork loin, you don’t want it to cook just yet. To cool the brine quickly, fill a large container with about five cups of ice. Use a spoon to stir the brine into the ice and cool it completely. This prevents us from adding the pork to boiling hot water and, thus, cooking it. 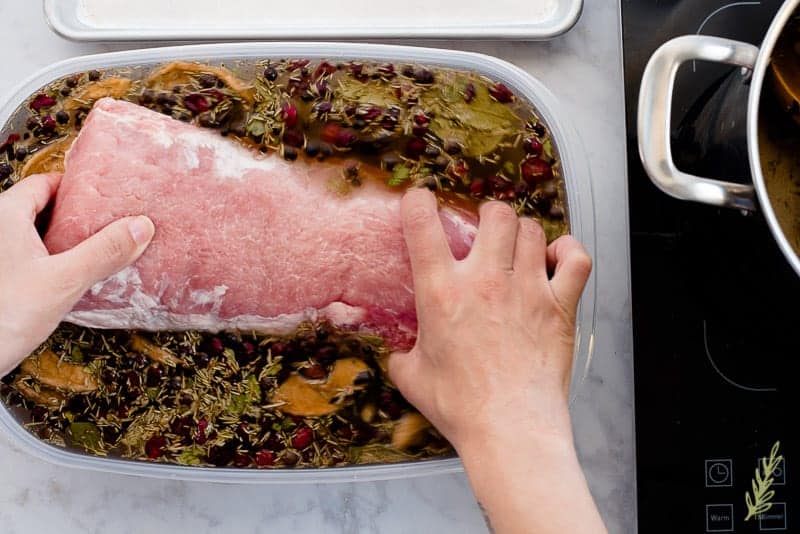 Once the ice cubes have almost melted, add the pork loin to the brine and make sure it’s fully submerged in the brine. Put a lid on your container and allow the pork loin to brine in the fridge for twelve to twenty-four hours. I just let mine brine overnight. 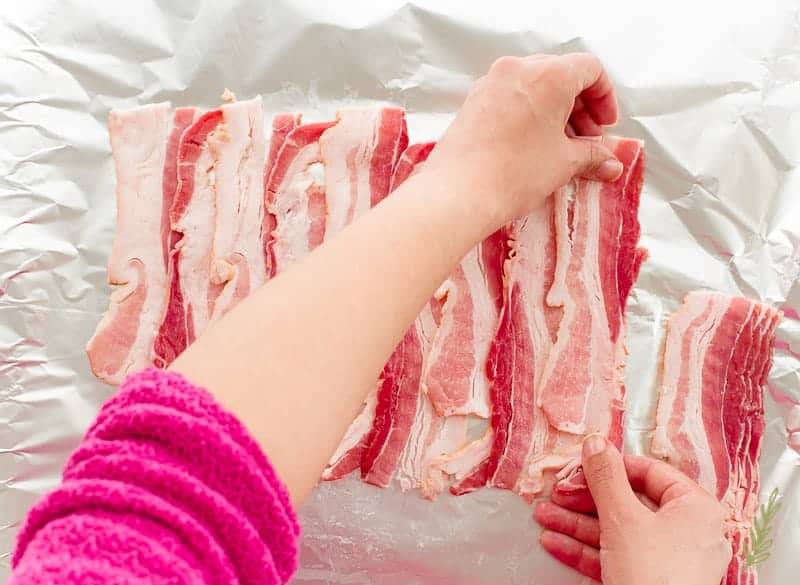 At least that’s what Hector says.

After the pork has brined, rinse off the leaves and peels that may be stuck to it, then pat it dry. Brines are not something that you can reuse, so just strain the whole spices, then discard them. The water can go down the kitchen drain, obviously. Lay out a twelve ounce package of bacon; overlapping the slices so each is touching the other. 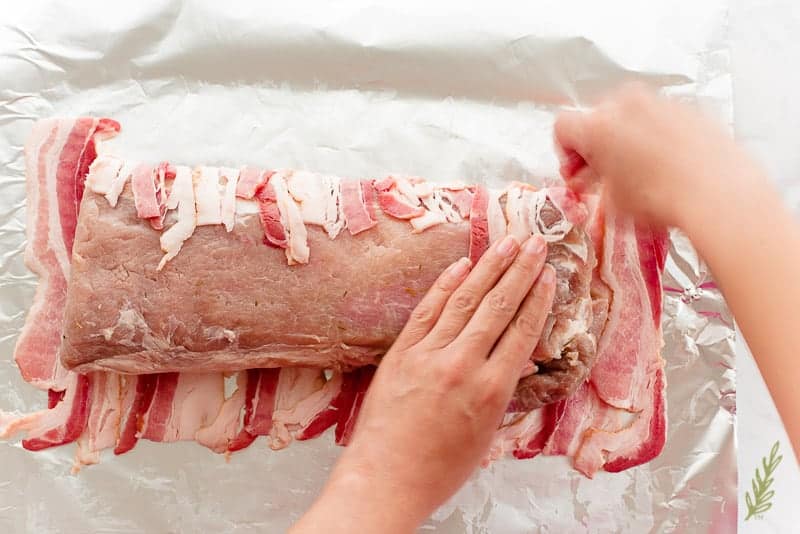 Place the dried pork loin into the center of the bacon slices wrap them around the loin. 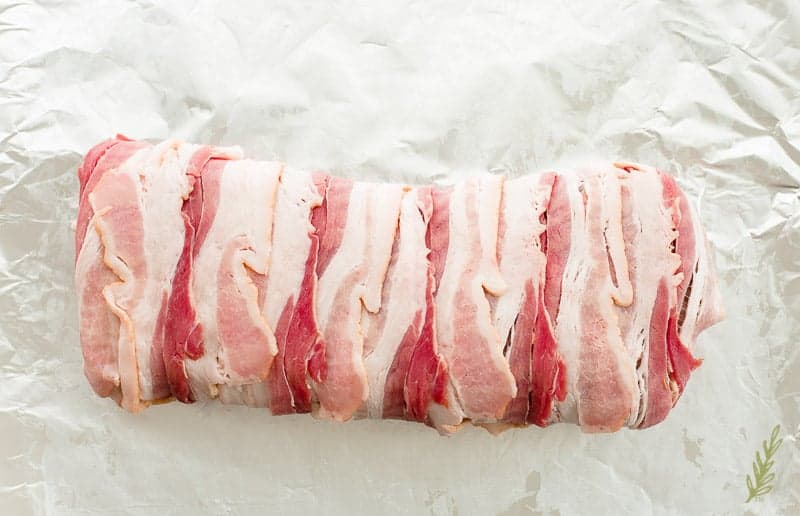 Flip the pork loin over and set it inside a large roasting pan so the ends of the bacon are held in place by the weight of the pork loin. Roast the pork loin in a three hundred fifty degree oven for about an hour. The exact roasting time will depend on how large your pork loin is. I’ll tell you about my pseudo-disaster with my cooking temp in a minute.

If towards the end of roasting, you see the bacon is still a little pale, turn on your oven’s broiler to low and get some color on it. It should only take a minute or two to develop this… 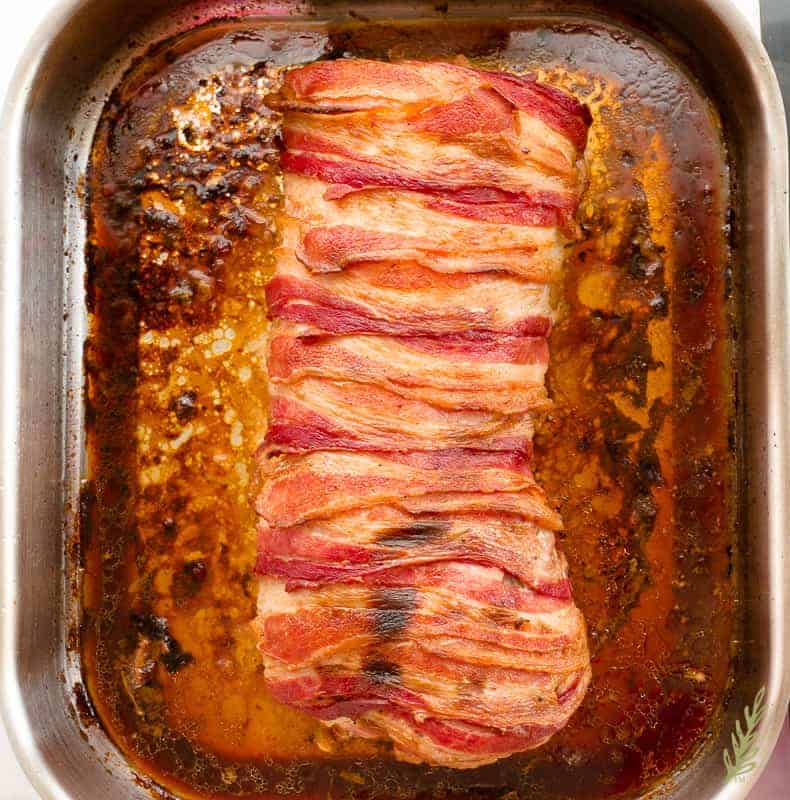 …so watch it carefully.

Once the pork loin has finished roasting, transfer it to a carving board and allow it to rest for no less than fifteen minutes. This rest will allow the juices in the pork loin to resettle into the meat, so they don’t run amok when you cut into it. 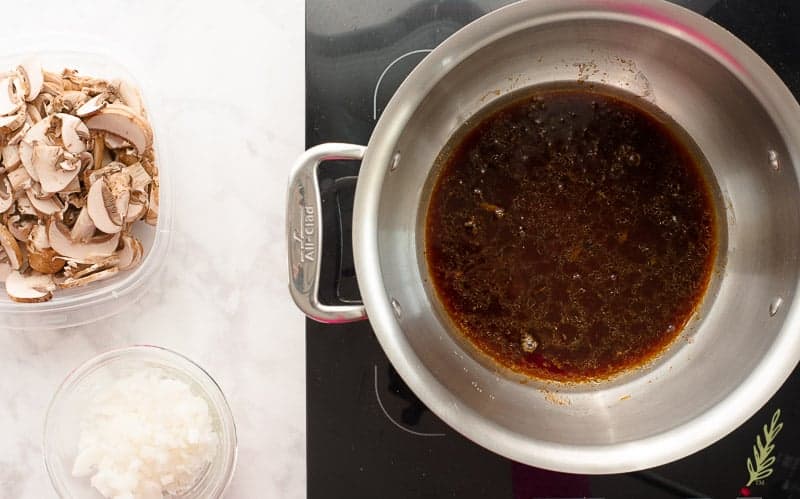 Begin the gravy while the pork is resting. In a saucepot, bring the drippings from the pan to a simmer. 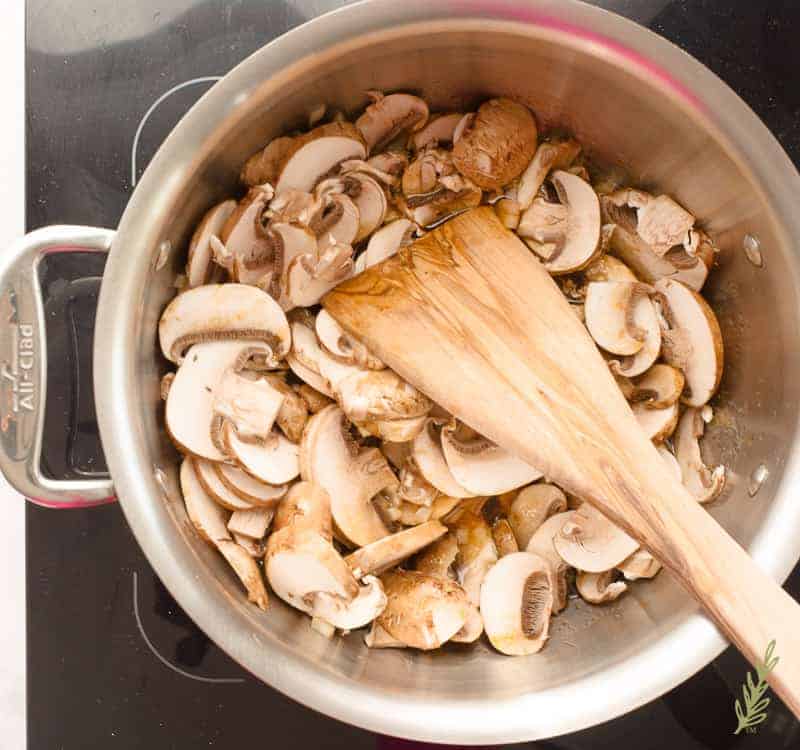 Add the onions, garlic, and sliced portobello mushrooms to the pot and saute them until they begin to get soft. 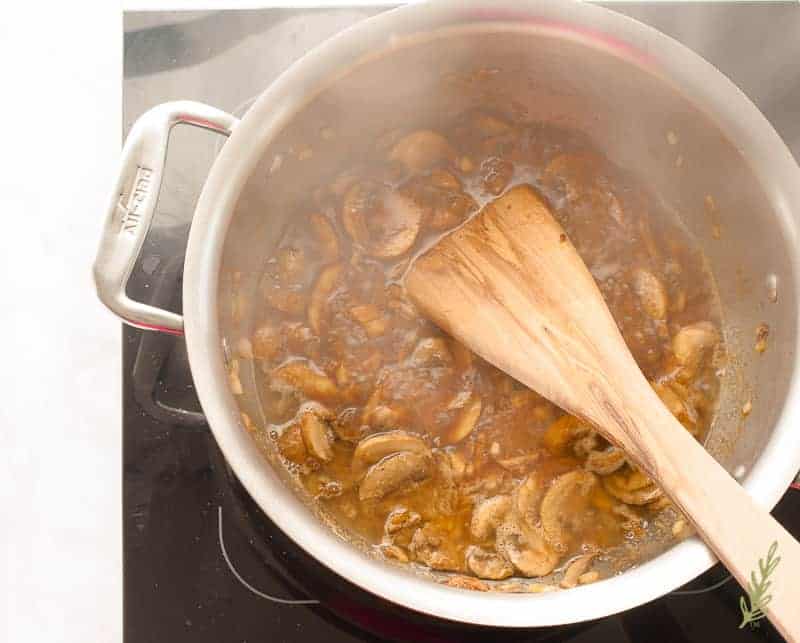 This should take about five to six minutes on medium-high heat. 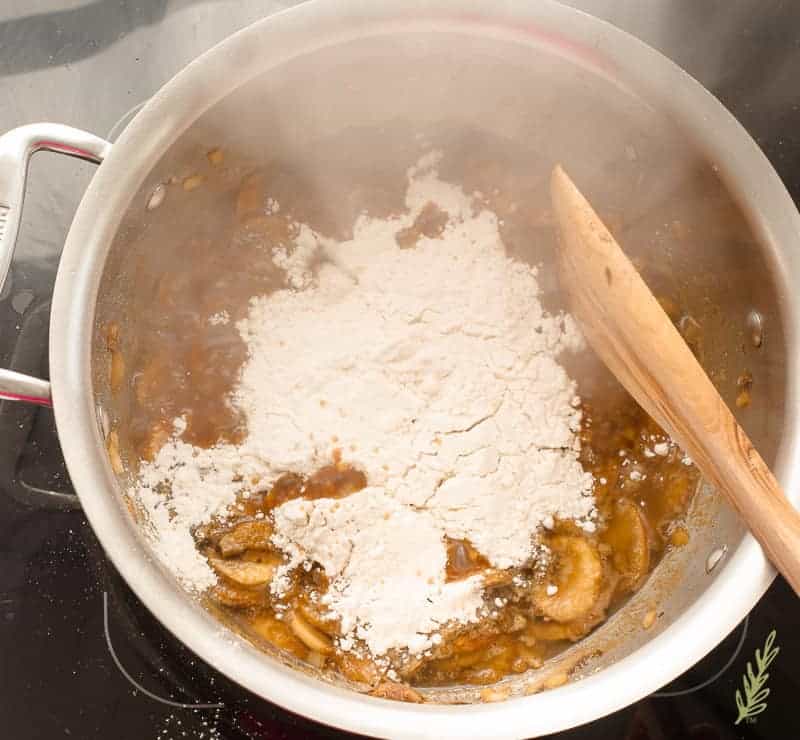 Add the all-purpose flour to the fat in the pot and allow the heat to cook out the flour’s starchy flavor. This process of making a roux usually takes about two minutes, or so. 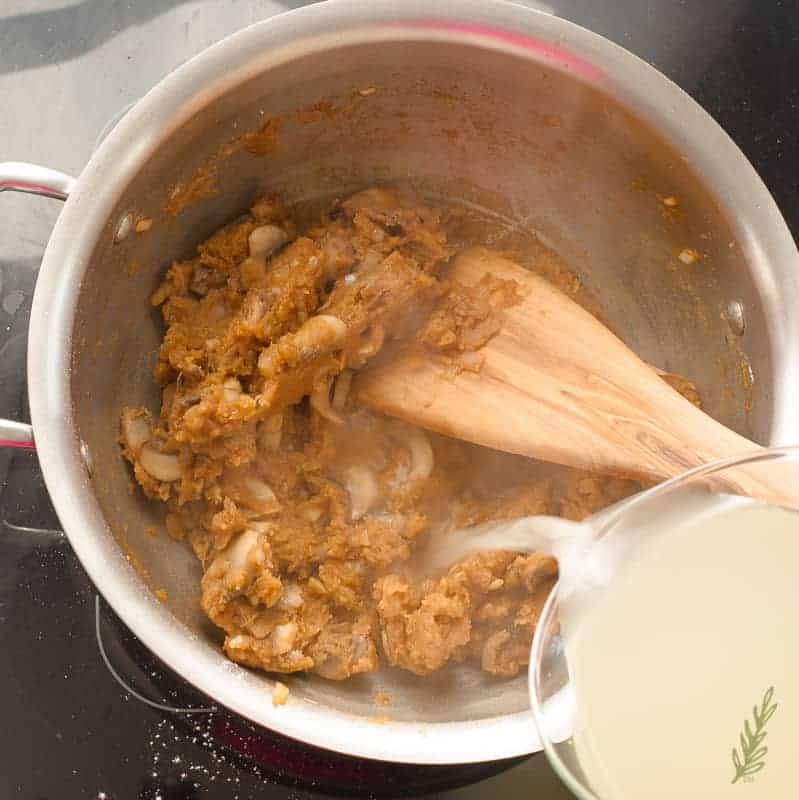 Once the roux has cooked, gradually add the chicken stock a cup at a time. Stir the roux well after each addition. Adding the stock to the roux gradually will prevent lumps from forming in your gravy. 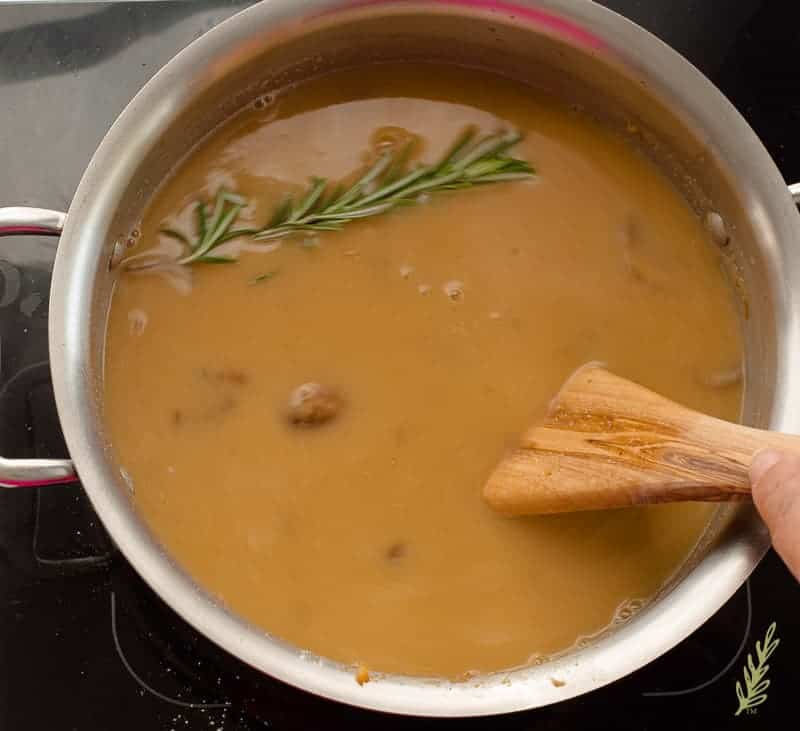 After you’ve added all of the chicken stock, add the rosemary and bring the gravy up to a simmer and allow it to thicken. Continue to simmer the gravy on low heat until thickened.

Why Thermometers are Important 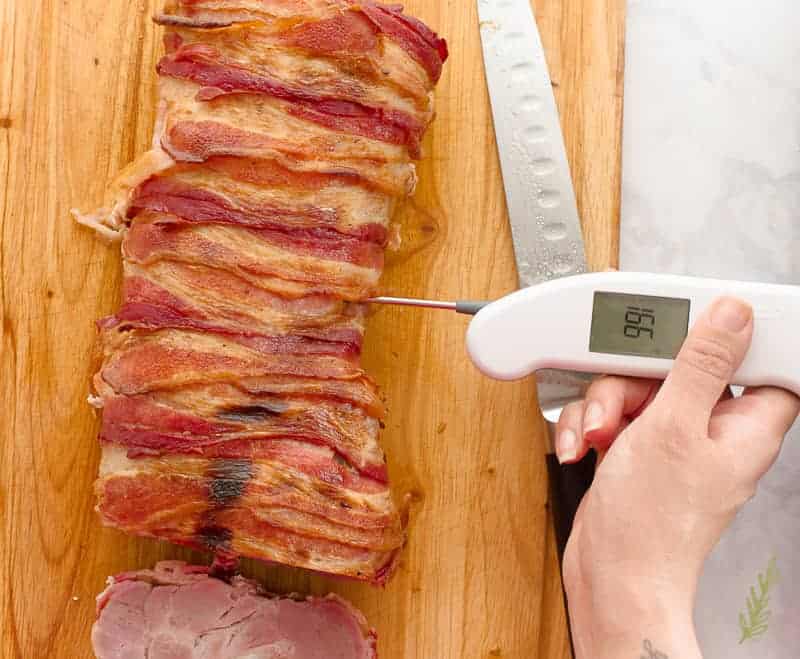 By the time you’ve finished the gravy, the pork loin should be well-rested. I had a bit of a snafu with this particular pork loin. The internal temperature of a fully cooked piece of pork should be between 145-160°F. Now, for me, 160°F is on the very high side and I try to avoid reaching that high. As you can see from the reading on my Thermapen, I actually surpassed it with this loin. Sheer disappointment I feel with myself, I have to tell ya’.

Now, had I used my Chef Alarm I wouldn’t have run into this issue. I could’ve set the alarm to notify me when my pork loin was reaching 145°F and whipped it out in time to have it carry-over to the perfect temp. But, I didn’t and I’m paying the price in my shame. The truth is, I was given a reprieve because of how long I brined my pork loin. That brining gave me a bit of leeway because it ensured the meat would stay juicy. But! Lesson learned- use the internal probe next time. 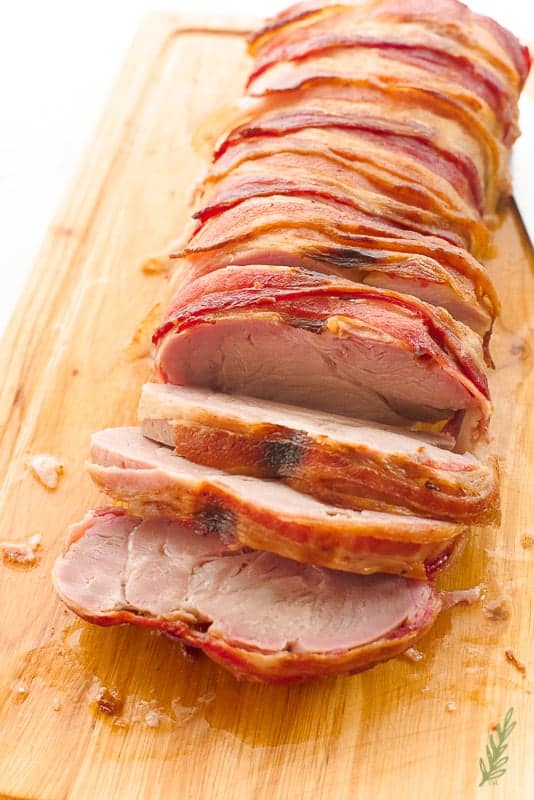 Grab a carving knife and slice off one inch thick pieces of pork loin for your family’s plates. 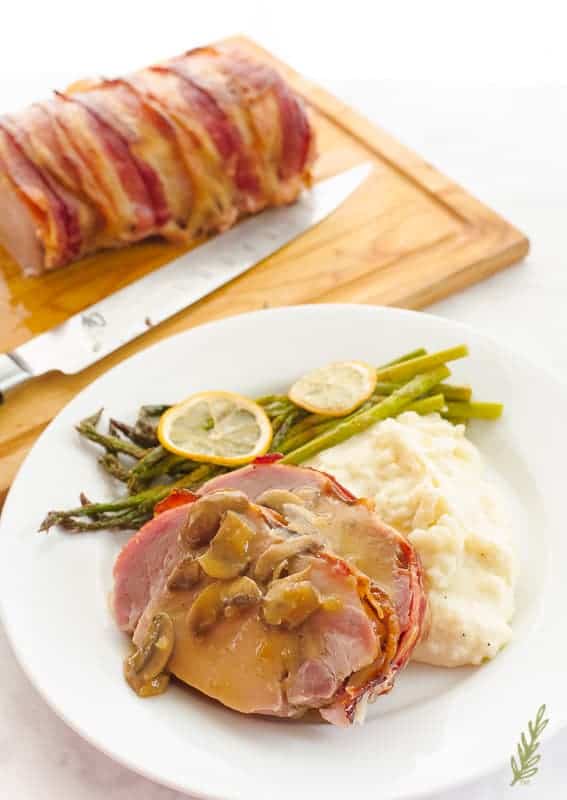 Again, I served mine with mashed potatoes and lemon-garlic roasted asparagus. 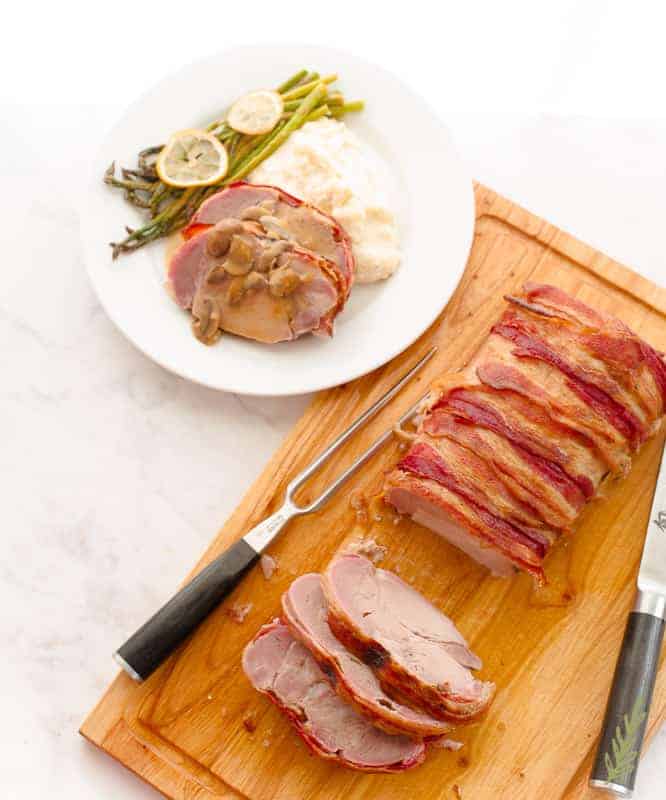 Of course, everyone was happy as we gathered around the table. Especially Hector, whom I’m sure wishes he were bacon-wrapped. Weirdo.

Hopefully, this Bacon-Wrapped Pork Loin (not Soldier) will make an appearance at one of your Sunday dinners. Pin the recipe for next week’s family meal and share it with your loved ones. 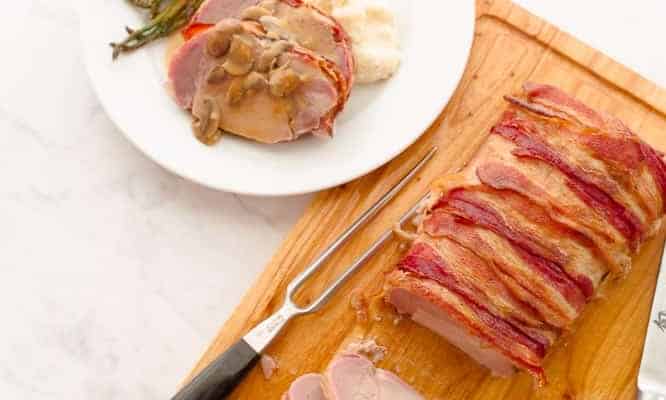 Want more easy recipes like this Bacon-Wrapped Wonder?
I’ve got you covered! 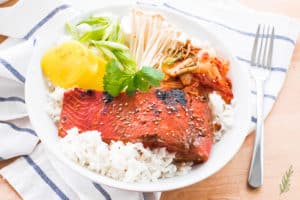 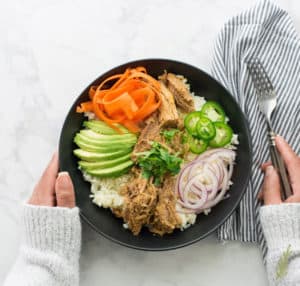 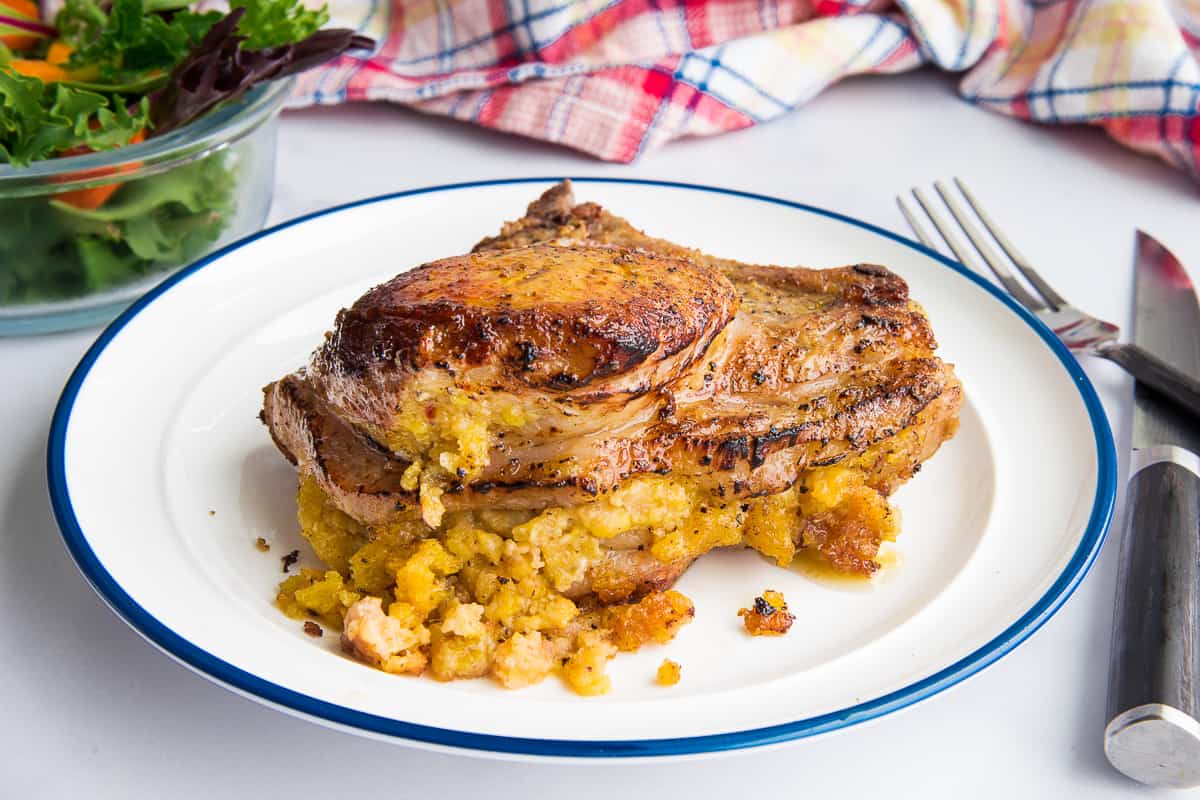 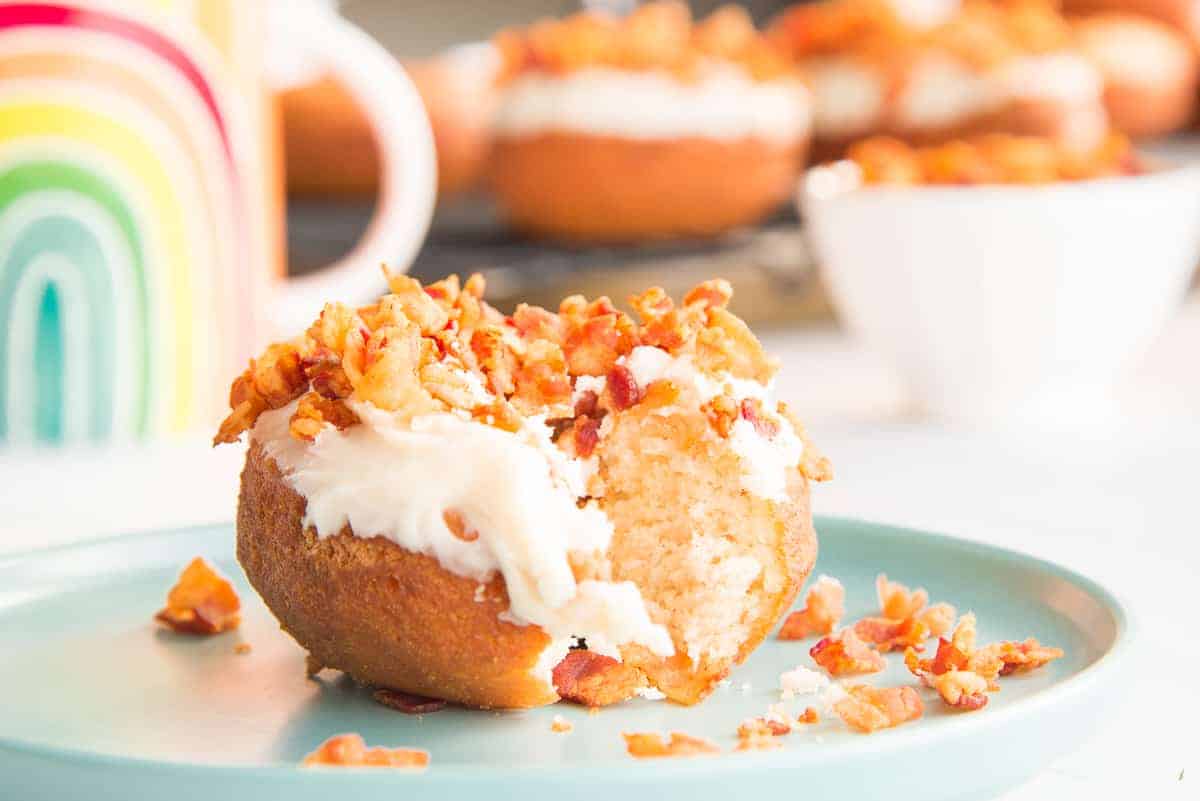 This looks really delicious.. and keto friendly too!

Anything bacon wrapped is a hit in our house!

This is making my mouth water!!! What an incredible meal!!!

Awesome, Patricia! Mouth-watering is always a great thing, in my book!