December 12, 2016 by Marta Rivera
A hug in a cup, this slow-simmered broth will fill you up.
Get RecipePrint Recipe
213Shares 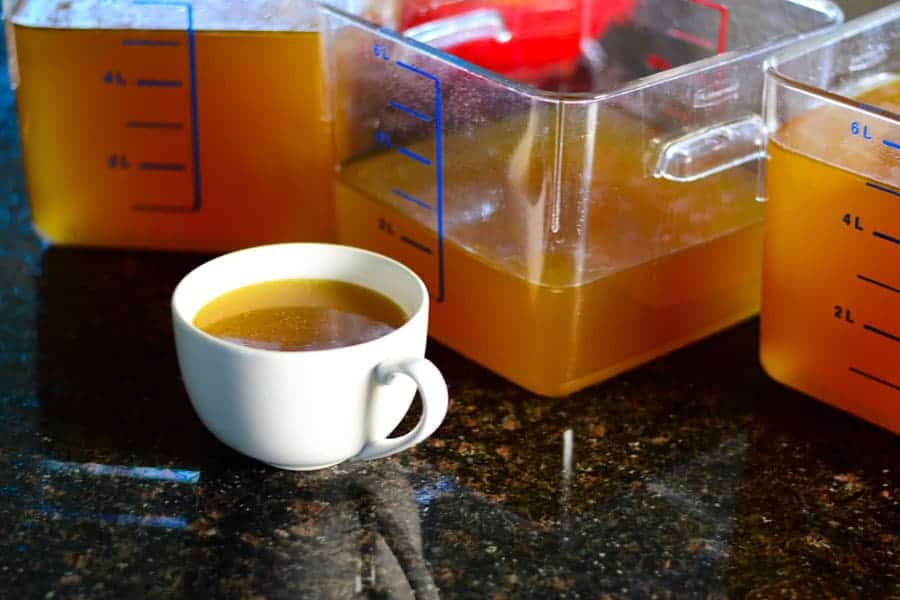 I am not a hippie.
I just want to put that out there prior to writing the rest of this recipe.
I thoroughly enjoy shopping for clothing that is obscenely priced- even though I’m obscenely broke. I love eating fatty, rich foods- preferably those which are encrusted in carb-heavy products and deep fried in its own fat. I like big cars. Yeah, I’m definitely not a hippie. But bone broth makes me have tendencies.

That said, I can appreciate hippie-like meals. I consider bone broth to be very hippie-esque solely based on the fact that when I first heard of it it was from a very hairy, musty-smelling, au natural female who touted its miraculous healing powers. I’ve associated it with granola and Birkenstocks ever since.

What is bone broth?
Well, for starters, it’s the incorrect or amalgamated term for a hot liquid cooked with animal bones and a small amount of meat. I know I become a total tool when I start throwing things like that around, but the reality is a stock is liquid made primarily with animal bones (which is what bone broth is), while a broth is a hot liquid made from meat and veggies cooked in water. They’re different. But, for the sake of familiarity, I’ll concede and go with the status quo by saying it’s a broth made from bones. Super technical and deep, right? No. But, that is all it is. You’d think that something so straightforward and simple would be a blip on the radar. You’d be wrong, as I was , when I found out my second semester in culinary school that they were not just hot liquids consumed out of bowls. There’s an entire course dedicated to Soups, Stocks and Sauces. Imagine that. An entire grade riding on a soup. My chefs did not play when it came to their soups or the sauces (especially those “Mothers”), nor did they mess about with the stocks. It was in Chef Carter’s class that my appreciation of a well-made stock began, hence the reason I can’t just say it’s a broth without cringing.

People nowadays are raving about the health benefits of bone broth, but in all honesty, I have yet to read anything on the subject from any reputable medical source like the American Journal of Medicine or the Mayo Clinic. I don’t like to profess my food will do something it hasn’t been proven, medically, to do- so I don’t. I also can’t, in good conscience, support the claims of miraculous healing and beauty benefits that I’ve seen many others do. I just know that when I’m sick or my children or Soldier get sick, I make bone broth. I make it and I give it to them and they feel comforted. Not healed, but comforted. That’s enough for me- especially knowing where I got it from and how it was made.

There are actual bone broth companies out there now. Get that. Companies who’s sole product is bone broth in a jar/can/box. Healthy bone broth that is mass produced.

But, if the health benefits are truly to be found in the wholesome bone broth, why aren’t we making it at home in small, controllable batches? We are…at least, you and I are…or, we will be now. 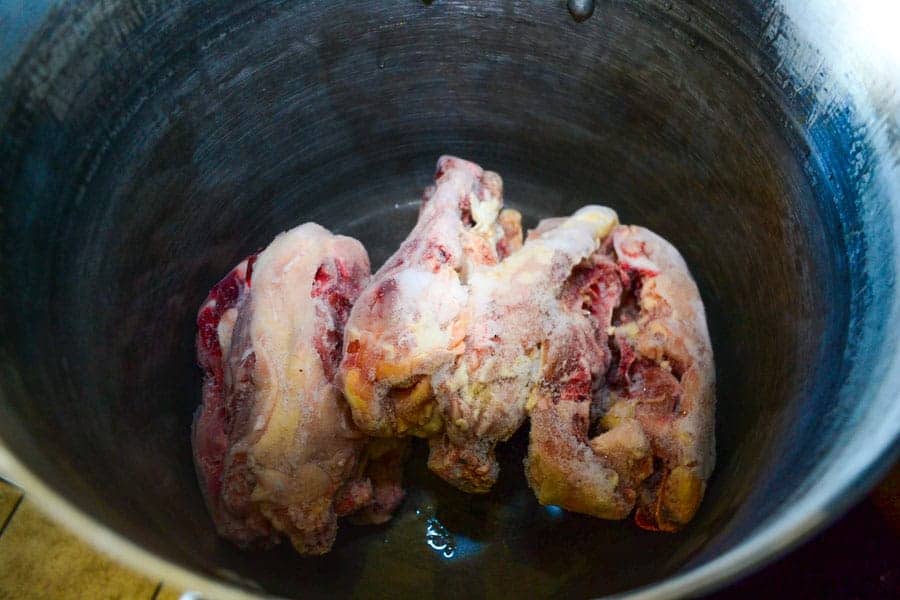 Where do we get said bones? From every chicken, duck, pig, or cow you cook in your kitchen.

Or, from the butcher.

Most of the chickens I buy I purchase whole in order to butcher them after I get home and unload the groceries. I can’t fathom paying an extra buck a pound for people to cut the chicken, so I just do it myself. I also know that’s the most economical way to obtain my carcasses. I break down my chickens and I always set aside the keel bone (the bone the holds the breast together), the wing tips and the backbones. I pop them into a freezer bag and when I have 6-8 of these bags, I dump them into my commercial-size caldron (stockpot) and have at it. Now, I respect the fact that not everyone owns a stockpot that you could cook a child in, so I’ve scaled back the recipe for you normal folks. Just note, the pictures depict bone broth being prepared by people like me- psychos.

Bone broth is not a quick fix, but that’s only because of the amount of time it takes to slowly cook the stock. The prep is pitifully easy, and the most labor you’ll put into it is in the straining and bagging process. Scout’s honor. Veggies aren’t peeled, spices and herbs go in whole. Even the bones are thrown into the pot frozen. Truly nothing to it, but to do it and to babysit, but even with that, at least it won’t cry when you try to put it to sleep, amiright!?! 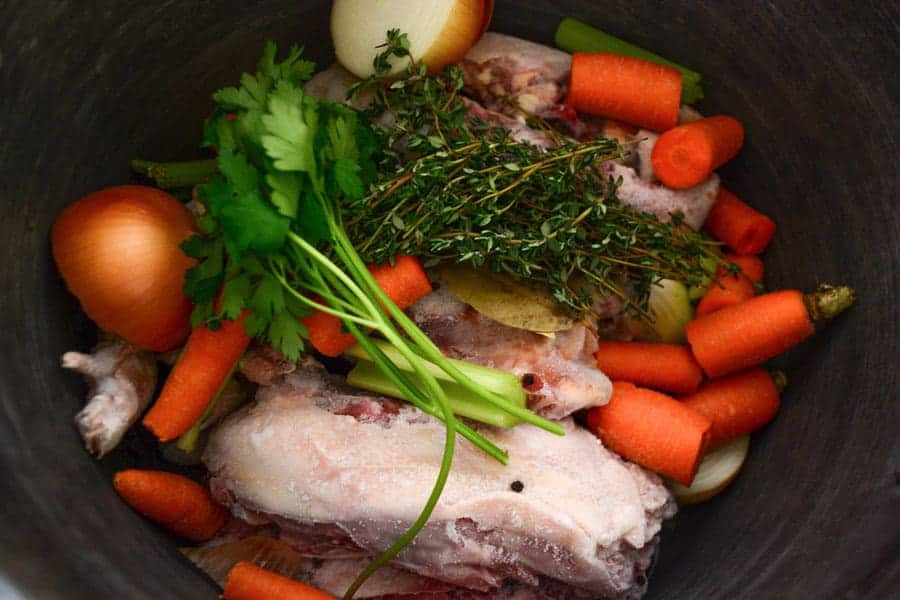 The deep, savory flavor of the broth-stock (I should call it a “brock” or a “stoth”), the liquid, comes from the slow, drawn out cooking of the bones on the stove. I used to roast the bones prior to boiling, but found that when I simmered it over low heat on the stove, I ended up with the same rich flavor. Naturally, being a person WITH A LIFE, I eliminated that step. The peeling of veggies was another unnecessary step, the bulk of a veggie’s nutrients are found in the skins and peels. Dirt is as well, but that’s what washing is for. The slow simmer goes on for 24 hours and leaves you with a gelatinous, full-flavored liquid of epic proportions…it gets me excited y’all. 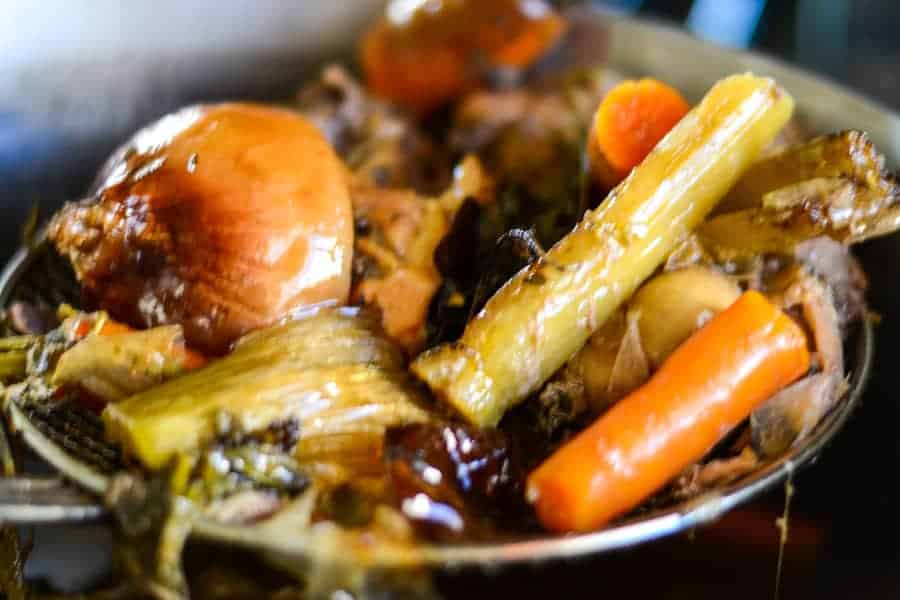 Ain’t it pretty? All the life juice has been sucked from it!

Straining removes the remaining nasty bits like the onions root hairs and the loose herbs. You’re left with golden delectability in liquid form. 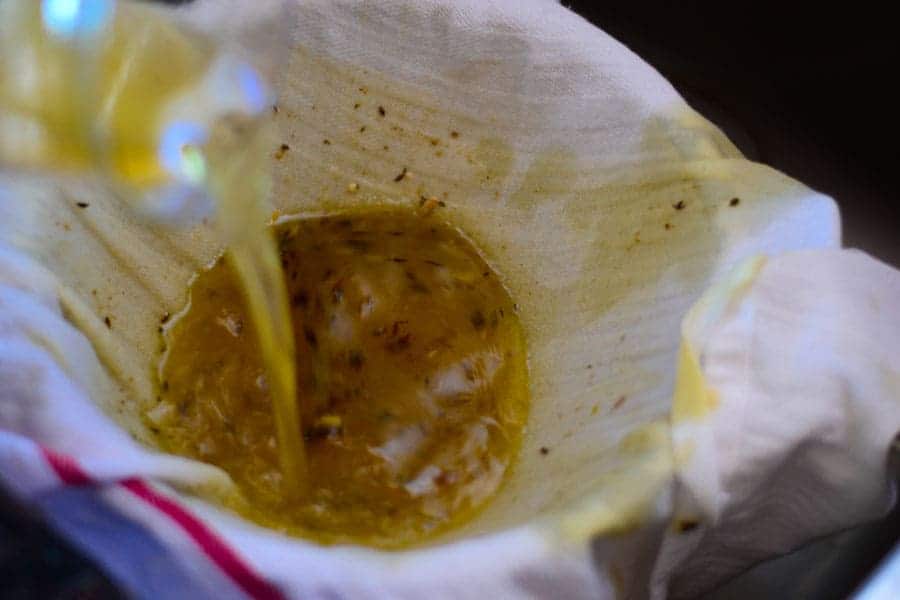 And you sip. And sigh. And sip. And groan. And sip so’mo.

You don’t develop amazingly clear skin in two hours.
Your leaky gut won’t be healed instantaneously.
You won’t be cured of that insane fear of clowns overnight…but, you will be comforted.

Share with me the “Old Wive’s Remedy” you grew up on. Mine, as with most Latinos was “Vick’s Vapor Rub will cure everything from a cold to a fractured skull.” 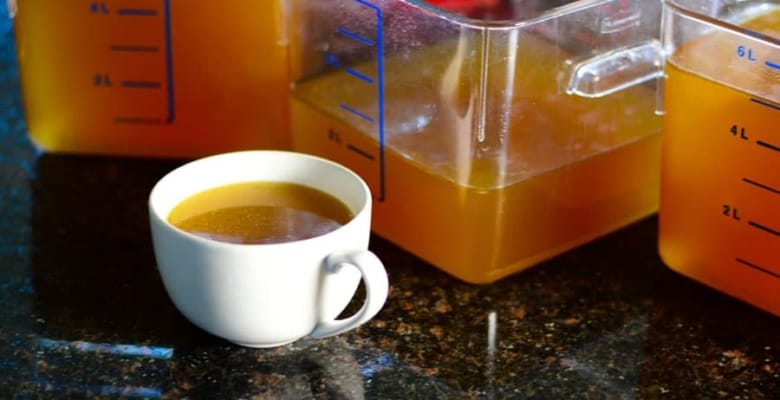 Marta Rivera at Sense & Edibility
No ratings yet
A hug in a cup, this slow-simmered broth will fill you up.
Servings: 1 Gallon
Print Pin Recipe
Cook Time 1 d
Total Time 1 d 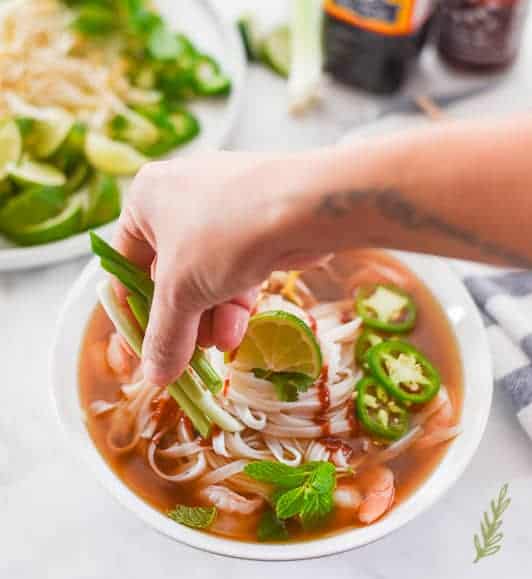 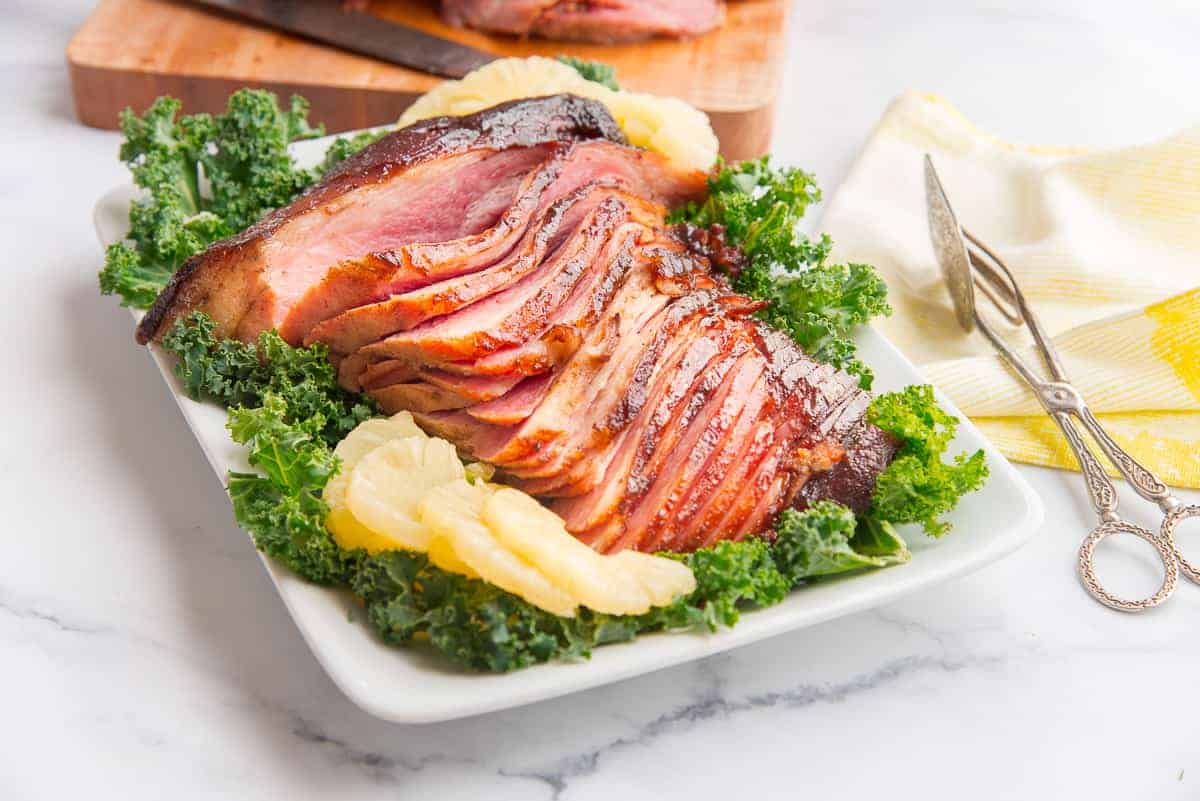 I grew up on warm honey with lemon to soothe any sore throat or cold. I have memories of sitting on my grandpa’s lap drinking this hot concoction when I was home sick from school.
That and a hot cup of tea with honey can make the world a better place. We drank lots of tea around that farm kitchen table.

Such a sweet memory, Betsey!! I love when food (or drink) takes us back to a happy memory!