July 26, 2017 by Marta Rivera
A sweet and tangy way to beat the Summertime heat. Use your choice of ripe tomatoes to add a little variety. Pre-made pie crust will have you eating dinner in about an hour!Special equipment needed:
Get RecipePrint Recipe
157Shares 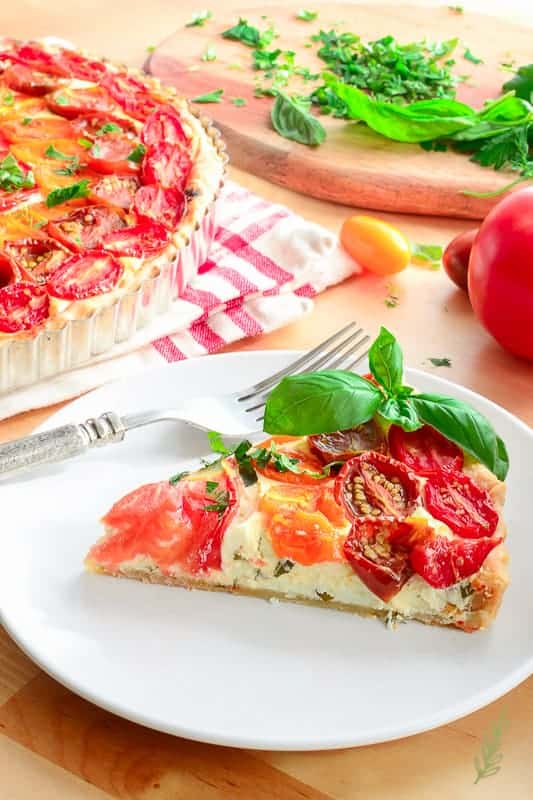 The best recipes known to man have developed out of creativity, laziness, sheer desperation, or a combination of the three. So it is with this recipe. Chèvre (goat cheese) and tomatoes are one of my favorite pairings. I enjoy them together in salads, on pizzas and in appetizers. Last Wednesday I couldn’t muster up the motivation to cook anything complicated. So, I decided to put chèvre and the tomatoes together in a vessel I love almost as much as I love my Twinks- pie dough. I’m expecting Escoffier to come back from the dead and hand me my James Beard award himself.

The average temp here in Central Texas has been over 100°F for the past month. Naturally, I have to leave the house- you know, for food and whatnot- and every time I do, I’m slapped in the face with hell. By the time I get back home, the only thing I want to do is die. Okay, that may be a bit dramatic. I want to sleep. That’s better. (But death is a close second)

Days like those make tarts, like this one of chèvre and tomato, the perfect solution for dinner. Especially, if you keep a few discs of pie dough stored away for the dog days of summer like I do. Because of how quickly this tart comes together, and the ease of its preparation, this has become my go-to meal for those “blah” days. And lately there’s been a lot of them. In less than an hour, I can have a rich, hearty main dish to serve with salad, and dinner’s done.

So, what is chèvre? It is, quite simply, French goat cheese. The U.S. has Humboldt Fog, Greece has its feta, Japan has its yogi, and labneh comes from the Eastern Mediterranean. They’re all cheeses made from the milk of goats. While cow’s milk and goat’s milk are very similar in fat content and nutrients, goat’s milk is tangier. As a result, cheese made from goat’s milk, like chèvre pair very well with sweet elements. Hence, the reason why this tart is the perfect balance of sweet and tart. 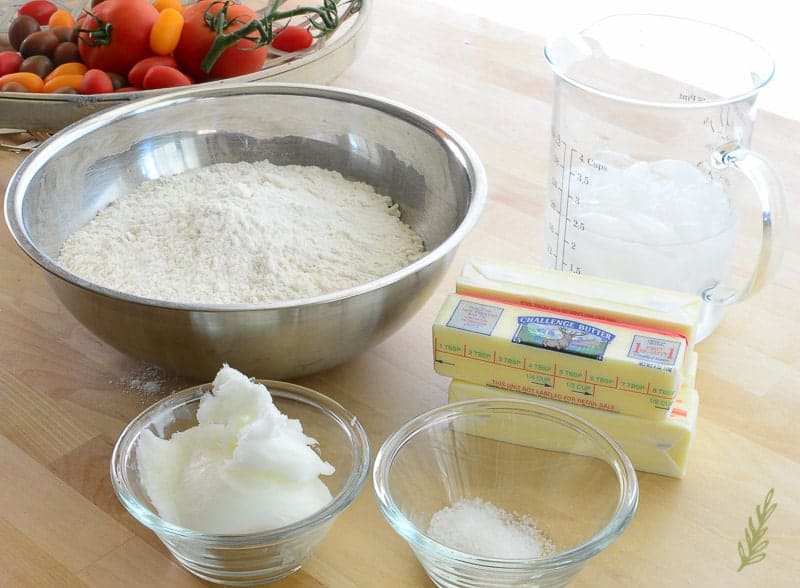 The key to all amazing tarts is having an amazing crust as a base. While the whole world seems to be bugging the hell out over what’s good for you and what isn’t; I’m over here chucking lard into my pie dough. Here’s my logic behind that: lard is animal fat. Animals are living beings. I’m a living being. Because we, both, are/were living organisms, my body will accept something (like fat) that came from another living thing. It probably accepts it more than it would shortening. That’s my thought process, and since I love me some lard, I’m sticking with it. Lard is good for you.

Of course, I’m not a dictator, so if you have a reservation against using lard, use the shortening. Whatever you do, don’t attempt to make a nice short dough with only butter. Sure, it will taste great, but it also melts easily which leaves you with a gummy dough. That same low melting point extends to the oven where the all-butter dough will begin to melt (possibly shrinking your pie shell), and subsequently burn at faster rate than would an lard-butter dough. Lard has a higher melting and smoke point; it’s the perfect fat to cut with the butter.

Feel free to use leaf lard if pork lard gives too savory a flavor for your liking. The most refined pork lard out there, leaf lard, has a less “porky” flavor (for lack of a more official description). Again, if you have a dietary or religious restriction against using pork products, vegetable shortening is the alternative. Just no straight butter.

Great doughs are cold and stay cold as long as possible. Flakiness comes from the sudden burst of fat melting in a high-heat environment (your oven). The pie crust’s flaky texture is the result of those pockets of empty space. When you bake a dough that has been overworked and under-chilled, you end up with a pie dough that has soft, if not melted, butter worked throughout. The pieces of butter don’t have the opportunity to get shocked into a quick evaporation- i.e., no pockets. No pockets= no flakiness= waah waah pie dough. Taking your time to thoroughly chill your ingredients before, during and right before baking is the key to having the flakiest crust imaginable.

Chilling your butter and lard prior to mixing is essential. I also go so far as to place my measured flour and salt into a metal bowl which I then place in the fridge for a half-hour. 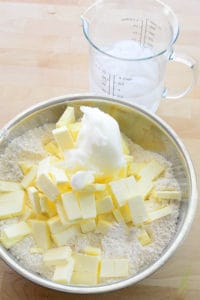 Find the smallest bowl in your kitchen to cut the flour into the dough. NO! Don’t be a goofball like me. Why I chose such a small bowl to work in is beyond me, but don’t do that. It’s dumb. Give yourself room to work without making a mess. Cutting the fat into the flour is exactly like it sounds, you’re breaking down the fat into smaller and smaller pieces to coat it in that flour. Remember, the goal is to have little pockets of encapsulated fat that will evaporate quickly once that heat blasts it. 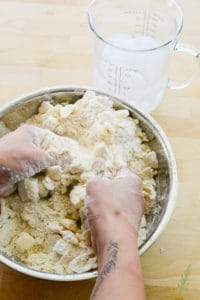 Cut your fat into the flour-salt mixture either by pinching it between your fingers like I did, or by using a pastry cutter. If you find that your butter is starting to warm too much, take a break and pop the bowl into the fridge. Your butter should never be too soft while cutting it into the flour. 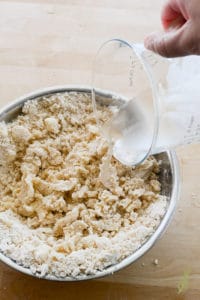 Your finished mix should resemble coarse cornmeal and should hold together when gripped in the palm of your hand. Add your ice-water to the dough and mix until it comes together in a smooth ball. 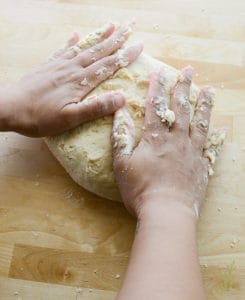 Turn your dough out onto your countertop and form it into a large disc. 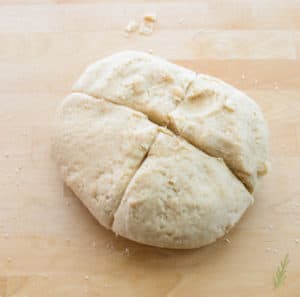 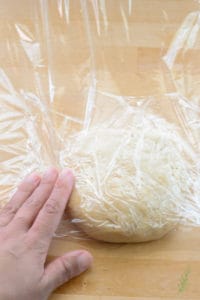 Form each these discs into smaller discs and wrap them well in plastic film. 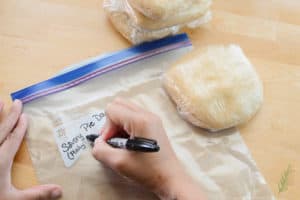 Refrigerate, or label and freeze, for later use. Refrigerate the disc you will be using for the tart for at least thirty minutes before rolling out. 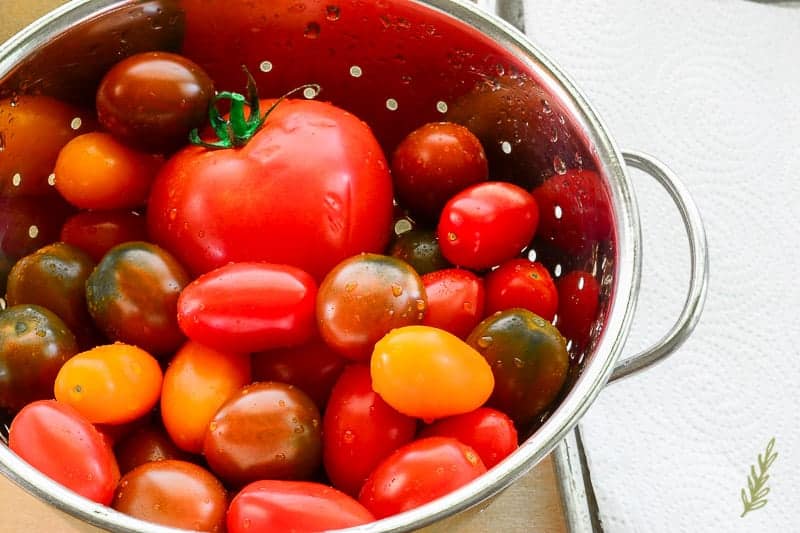 While your dough is chillin’ prep your tomatoes for their moment of glory. Wash and dry your combination of tomatoes. I love using a variety of tomatoes in this recipe because each offers a different level of crunch and sweetness. The vine-ripened tomatoes  have a thin skin and semi-sweet flesh, and are a great compliment to the thicker-skinned, less sweet, black zebra cherry tomatoes I used here. The orange cherry tomatoes I picked up at the Saturday farmer’s market were the sweetest of the bunch. It doesn’t matter if you use a wider variety of tomatoes or just one; make sure they’re clean and fully ripened, so that you can extract the most flavor out of them. 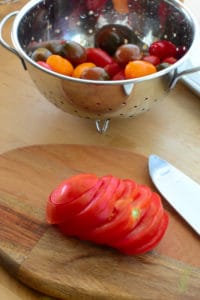 Slice your larger tomatoes into 1/4″ thick slices, and your cherry tomatoes in half. 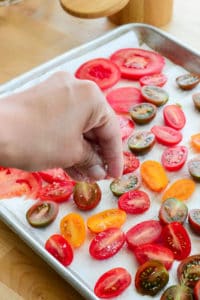 Place them, cut side up, onto a sheet pan lined with paper towels. Sprinkle a generous amount of kosher salt on to each tomato and cover with another layer of paper towels. Doing this not only extracts the juices from the tomatoes (which allows them to caramelize when they roast), it also flavors the tomatoes. The paper towels, absorb the water that the salt will extract. Allow the tomatoes to sit while you roll out your dough and prepare your chèvre filling. 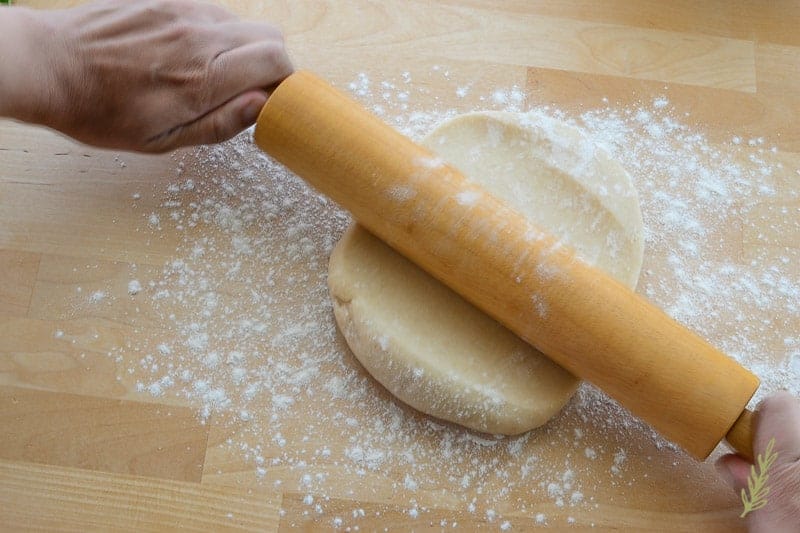 By now, your dough should have had ample time to cool off. Roll it out into a 14″ circle using a rolling pin. Feel for unevenness in your dough by lightly running your fingers over the surface of it. This “reading” of the dough allows you to correct the dough’s thickness and allows the dough to be rolled out evenly, thus ensuring it bakes evenly. If you find that a section of the dough reads thicker than the others, simply roll it out to match. Carefully, transfer your dough circle to a tart pan with a removable ring. Press the sheet of dough into the corners and up the sides of the ring. If you have overlap, just tuck it inside the shell and press to join the rest of the dough. “Waste not, want not,” I always say! 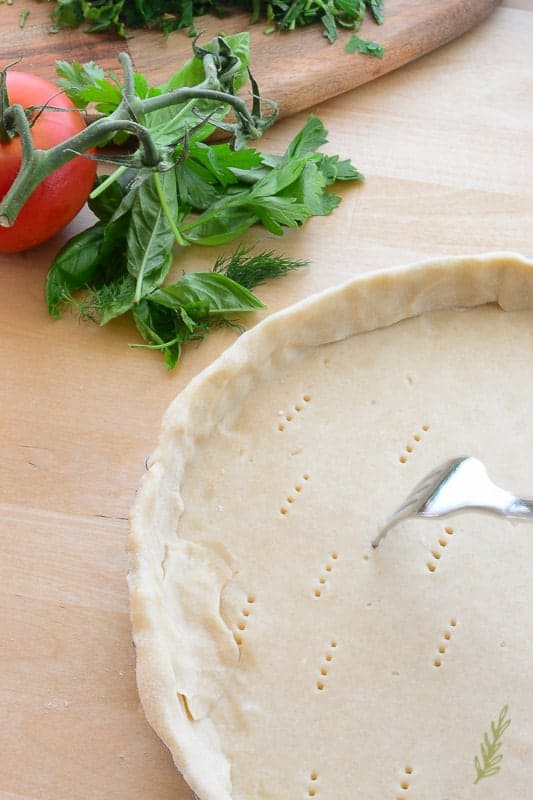 Prick the surface of the dough with the tines of a fork. “Docking” the dough in this way allows the steam, which is created during baking, to escape through the holes. This allows the dough to bake flat like you want it, instead of blistering and baking with a bubble- which is just embarrassing. Place the dough shell into the fridge and chill for 15-20 minutes while your oven heats up. 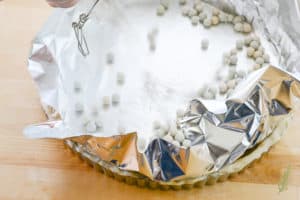 Once your oven is hot, line your dough with aluminum foil. Pour ceramic pie weights or dried beans into the aluminum cover and bake the shell on the lowest rack in the oven for 15 minutes. After 15 minutes, carefully remove the foil and weights and return the pan to the oven (remember not to push up through the bottom of the pan) to bake for an additional 10 minutes. Once the shell has baked, remove from the oven and allow it to cool while you prepare the filling. 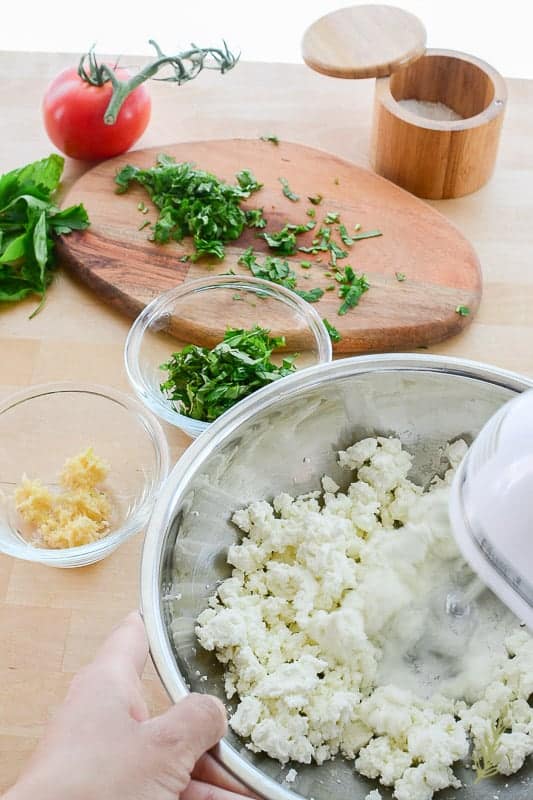 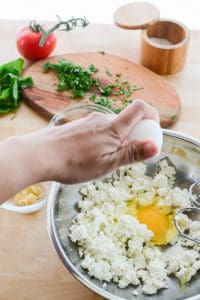 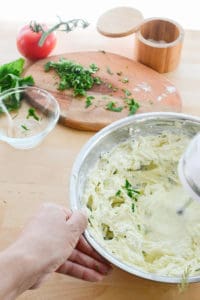 In a large mixing bowl, combine the chèvre, eggs, crushed garlic, salt, pepper and herbs. Blend until the mixture is smooth. 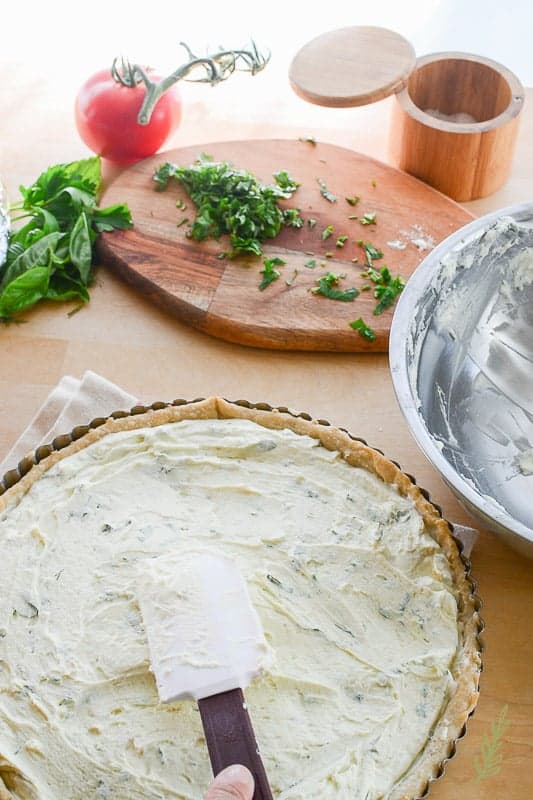 Fill your cooled pie shell with the chèvre mixture and smooth. 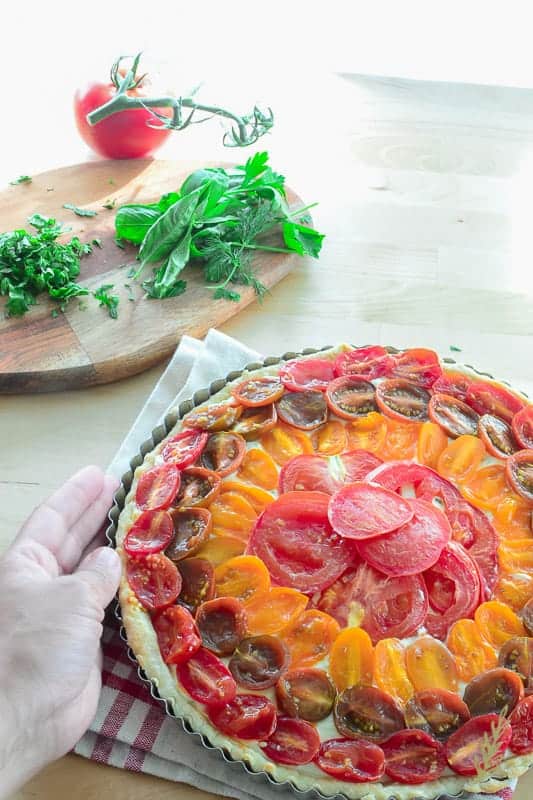 Arrange your dried tomato slices in a decorative pattern. You want to keep the layer of tomatoes as even as possible so they all roast and caramelize at the same time. Touch the side of the pan fondly because you know how good this is “fittin'” to be. Bake for 40 minutes. 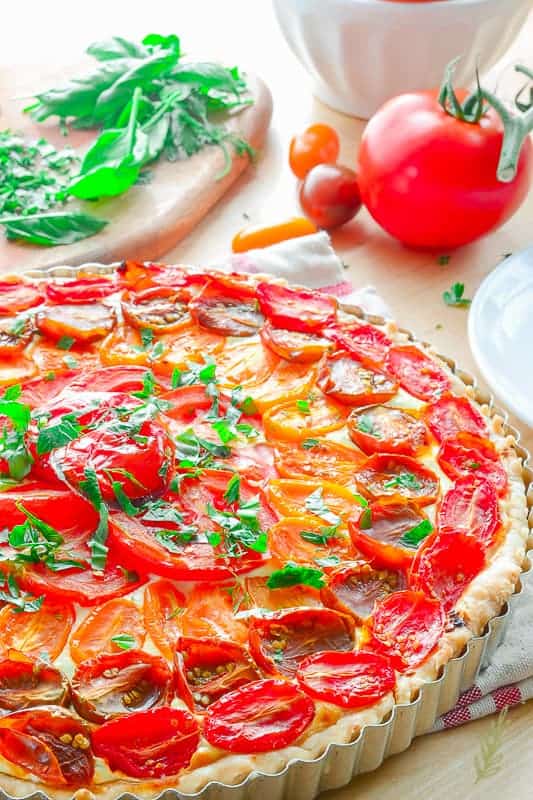 Remove from the oven and allow to cool for ten minutes before slicing into it. Serve it with a garden salad and you’ll have a dinner perfect for the sweltering heat. 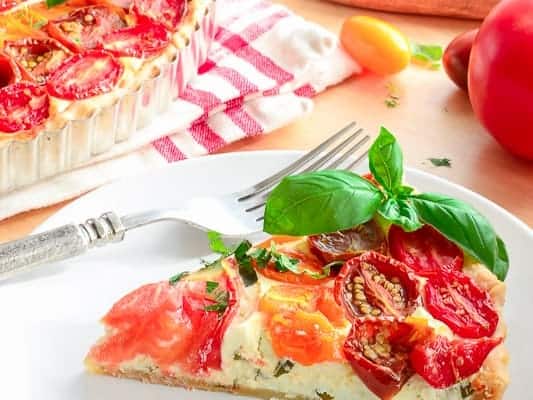 Pin this recipe for those days when the weather is trying to kill you. Add these recipes to complete the meal:

*this post contains affiliate links. To find out more about what this means, please see my disclosure page*

“I get slapped in the face with hell” ???????? That’s how I’ve been feeling but I couldn’t adequately describe it until now.