December 8, 2020 by Marta Rivera
See my notes on how to turn this cocktail into a crowd-friendly pitcher cocktail.
Get Recipe
1357Shares 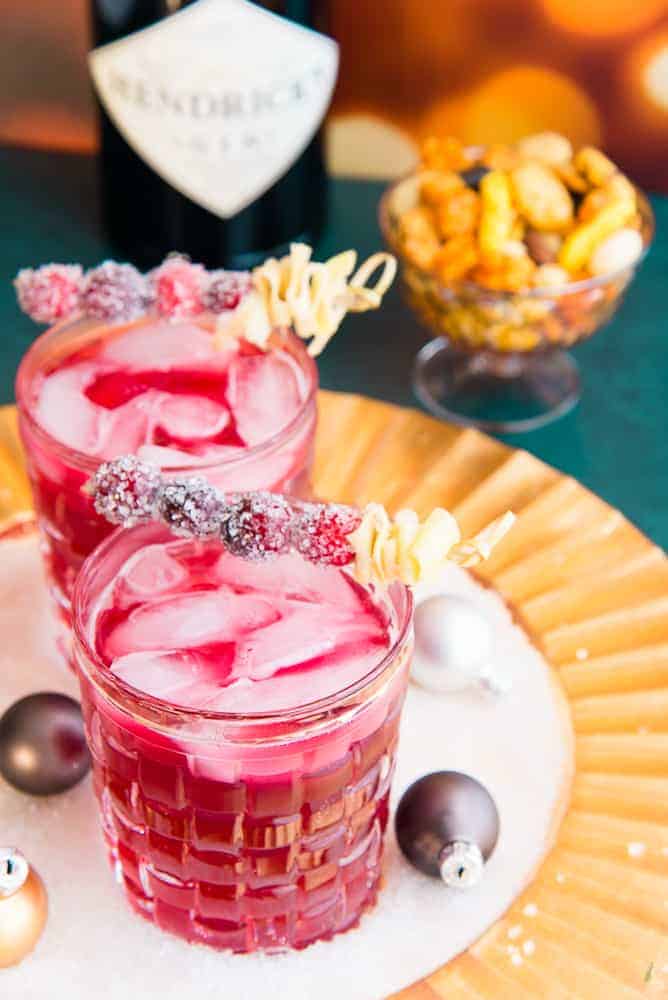 I’m about to put you onto your next favorite cocktail. My Ginger Rickey recipe is a spin on the classic Gin Rickey cocktail. The only things the two have in common are the gin and their fantastic taste. I combine cranberry juice and float ginger beer in this prettier version to create a cocktail worthy of fall, the holiday festivities, and my fabulous hand. Now I want your hand to be just as fantastic- if not more so- as mine.

What is a Ginger Rickey?

It’s made up. You know how I am. I like to think that, most of the time, I’m clever with naming my recipes.

I came up with this recipe a few years ago when I needed more cocktails to serve for the holidays. Whatever it was had to be pretty, tasty, and use the alcohol I already had on hand. When Mami was still living with us, cranberry juice was her favorite, so that was in plentiful supply. The ginger beer became the bow on top. Since I’m big on Moscow Mules, it was only a matter of time before I floated it on top of another cocktail, and this one was the lucky winner.

The name Ginger Rickey just fit. It is a more beautiful version of the classic cocktail and one that parlays into a holiday cocktail with no effort at all.

Well, what is a Gin Rickey?

The classic Gin Rickey cocktail is native to Washington, D.C. Crafted in honor of Col. Joe Rickey, the original libation was made with bourbon, not gin. Thankfully for me, the original gin rickey evolved, as most recipes do, to feature gin along with lime juice and a soda water float.
I love a good Gin Rickey in the summer, so I wanted a drink that uses the same elements, but in a more autumnal way. Lime and soda water are very light and effervescent, but they don’t carry over into the winter- at least not for me. So, this cranberry juice-ginger beer concoction pays homage to the original.

What do I need to make this cocktail? 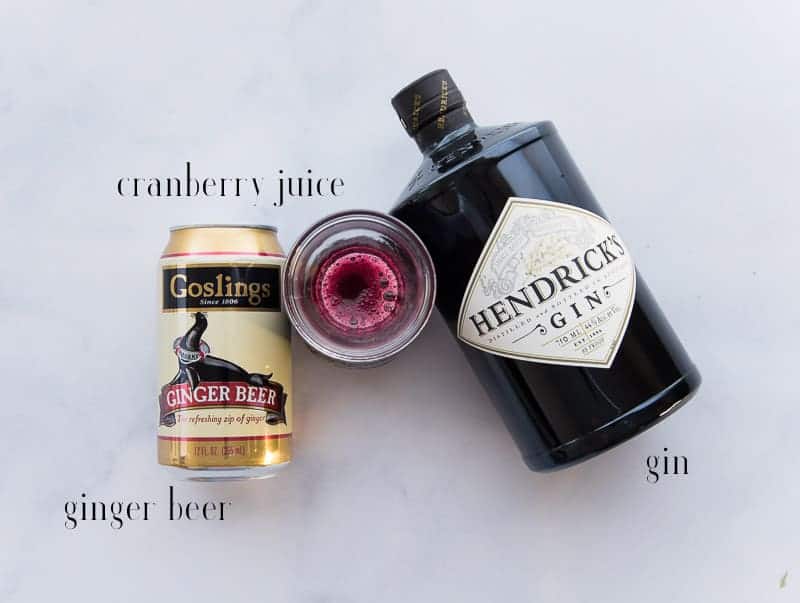 To make the fall version, just grab a can (or six) of ginger beer, a bottle of cranberry juice (not juice cocktail), and a high-quality gin.

Additionally, pick up your cocktail shaker, a few handfuls of ice, a jigger (for proper pours), and either a double old-fashioned glass or a highball glass.

How do I choose the best Gin for this Ginger Rickey? 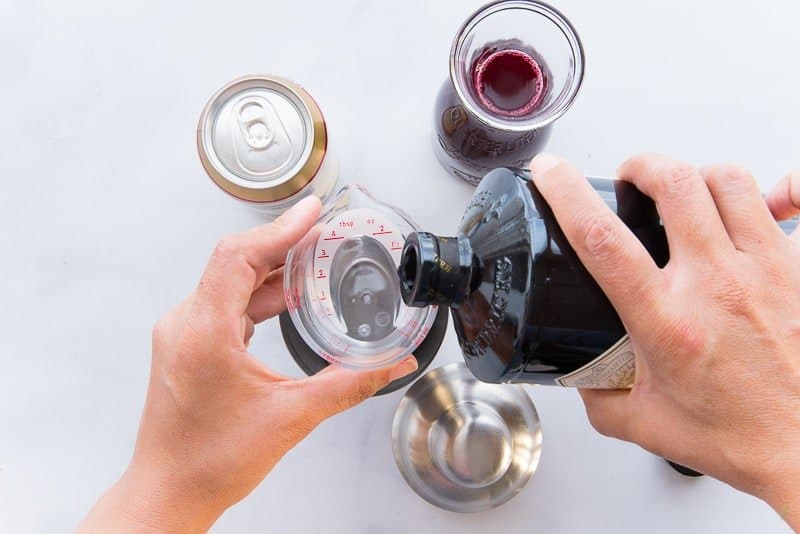 Gin AKA Jenever takes its name from the plant from which it is distilled: juniper. Here, in the States, gin is commonly the distillation of a variety of botanicals. The bulk of that flavor is (we hope) juniper berries. More than likely, you’re not drinking the earliest class of gin, which was straight juniper berries. That’s okay because that type of gin is potent.

As with all my other cocktail recipes, I recommend choosing a spirit that you can or will drink straight-up. Instead of trying to hide gut-rot liquor, my recipes seek to highlight quality spirits. I’m obsessed with Hendrick’s Gin and have been for years. Instead of it tasting like gasoline, theirs is a spirit with cucumber and rose undertones. I mean, I don’t know about you, but I’m totally worthy of drinking roses.

If you have a preferred gin, use that. Looking for a new one? Clearly, I recommend Hendrick’s as an overall quality gin. Bombay Sapphire is excellent if you’re on a budget or not a huge gin drinker. Ophir is another fantastic gin if you’re looking for a spirit suitable for both sipping and mixing.

Grab your cocktail shaker and fill it with a handful of ice. Next, measure out the gin in a jigger or a measuring glass. Pour it over the ice in the shaker. 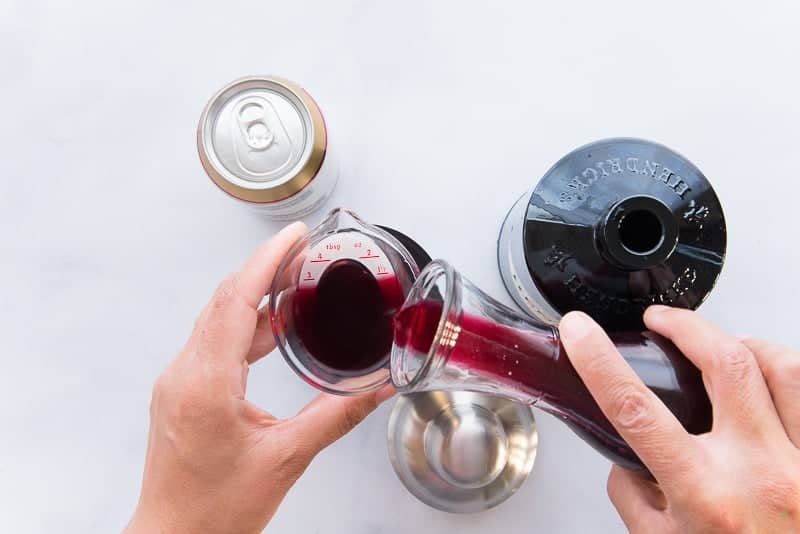 Because the latter contains a mixture of other fruit juices to make it less sour, it doesn’t do the same job in this cocktail that straight cranberry juice does. Cranberry juice is just that: the juice of cranberries. It’s tart. Pucker-factor is triggered. In that way, it mimics the tartness of lime juice found in the classic Gin Rickey. Can you use a cranberry juice cocktail and still have a bomb drink? Yes. The reason why I encourage you to try it with cranberry juice instead is that you end up with a crisp, refreshing cocktail, not a cloyingly sweet one. 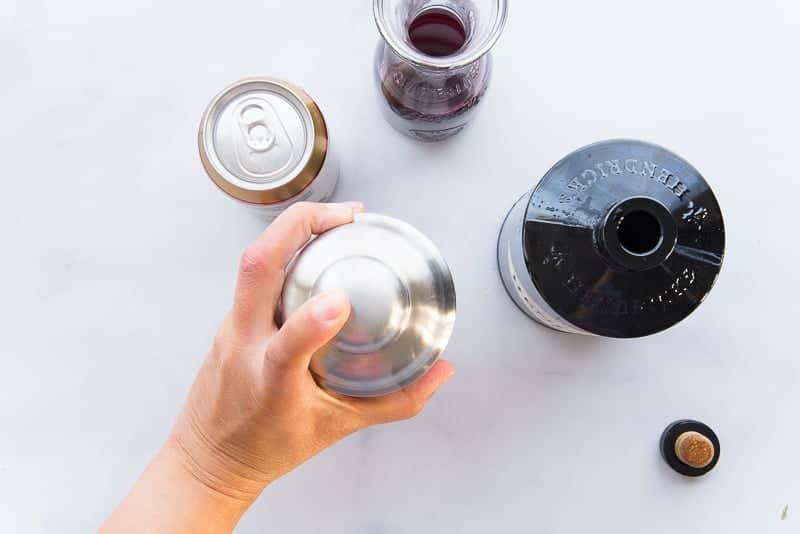 After you add the cranberry juice, cap the shaker and shake it vigorously until it frosts over.

How is the Ginger Rickey served? 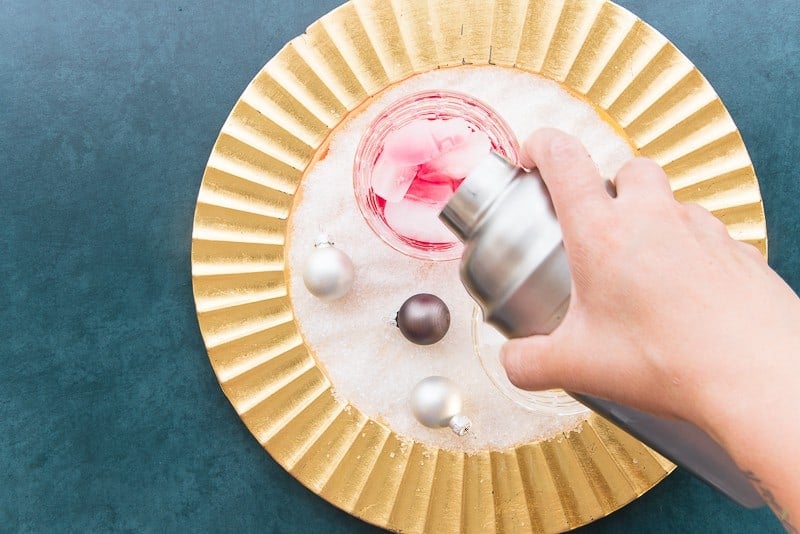 Because I enjoy a stiff cocktail, I balance that by pouring my drinks into double old fashioned glasses. If I serve my ginger rickey in a highball, as the traditional cocktail is served, you probably wouldn’t be able to understand this post. I would be sure that the glass held as much of the liquor as I could. So, instead, I drink and serve in moderation with a shorter old-fashioned glass. It’s called maturity.

Add a few cubes of ice to your glasses and pour the gin-cranberry mixture over the ice.

What type of ginger beer should I use for this cocktail?

Since this is a ginger rickey, why not replace the soda water with a robust Ginger Beer? Why not indeed, my friend.

All ginger beers are not created equal. Some lean towards ginger ale, which is weaker in flavor (in my opinion). As a result, I buy stormy ginger beer or any that are “strong,” “robust,” or “extra.” Short of making my own, this is how to ensure that ginger flavor is prominent.

Float the ginger beer over the gin-cranberry mix at the bottom of the glass.

Do I have to use ginger beer?

While you don’t have to use ginger beer, it kind of loses its namesake if you don’t. Instead, you can use soda water. This is great for folks who like super-crisp cocktails. I have also made this with tonic and seltzer waters.

How can I alter this recipe? 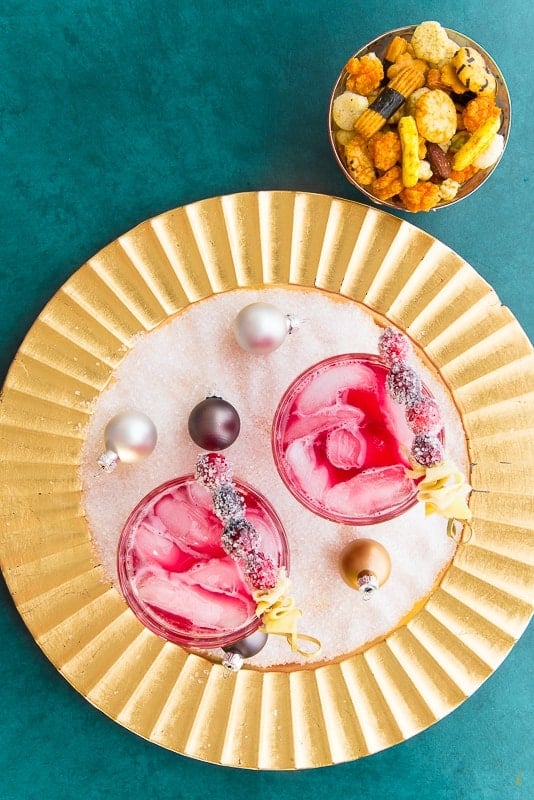 Alternate the juice you mix with the gin. Instead of cranberry juice, use:

Additionally, swap out the ginger beer for your choice of carbonated waters.

For the kiddos, swap out the ginger beer for ginger ale and obviously omit the gin. We don’t need the littles to drink this.

What should I serve this Ginger Rickey cocktail with? 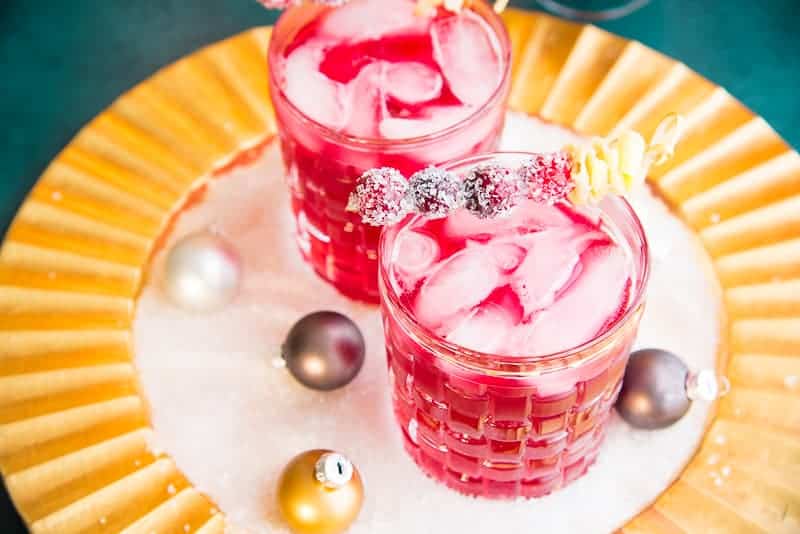 The ginger in this recipe pairs perfectly with Asian snack mixes. There’s something about the soy sauce and nori that they contain that blends so well with the cranberry’s tartness and the warm ginger.

If you’re looking for more robust or filling foods to serve with them, try these:

Can I make this cocktail in large batches? 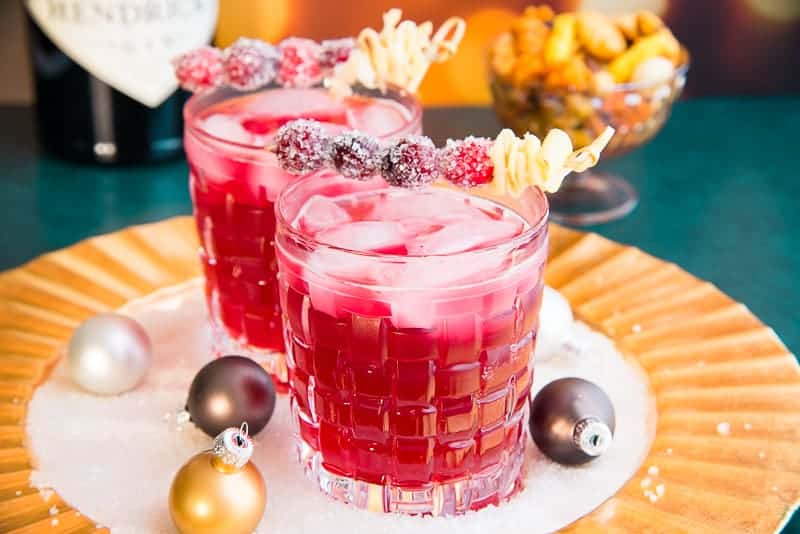 Because this is a holiday-centered cocktail, you should know that this ginger rickey makes an excellent Pitcher Cocktail.

All you need to do is double, triple, or quadruple the recipe. In a cocktail pitcher, combine the gin and cranberry juice together. Don’t add the ice just yet, but instead, toss the pitcher into the fridge to chill the gin-cranberry base. Don’t forget to chill the ginger beer also! Doing so prevents the ice from watering down the mixture.

When your guests have arrived, set out the pitcher, cans of ginger beer, and a bucket of ice. Allow your guest to fill their glasses with ice, the gin-cranberry mix, and float the ginger beer on as desired. If you have garnishes, lay them out on a separate platter so they can garnish at will.

What other cocktails would go well with this  Ginger Rickey? 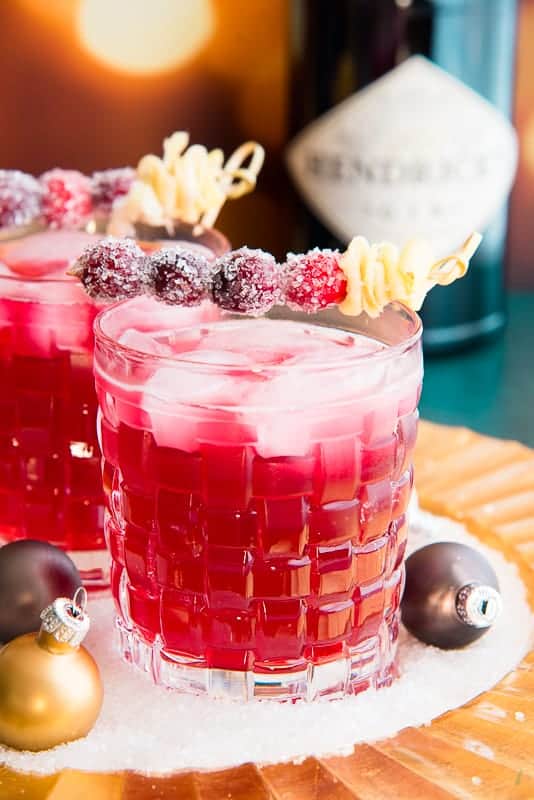 Go ahead and turn it into a legit cocktail party! Serve these cocktails, which are all crowd-friendly and transform easily into pitcher cocktails as well:

Well, there you have it, friend! Another morph on a classic recipe. I do hope you make and enjoy this spin on the classic gin rickey cocktail. Be sure to pin this Ginger Rickey recipe to your drinks board. Let me know how you enjoyed it in the comments below. Don’t forget! If you make this or any of my cocktail recipes, tag me in it on your social media feeds! 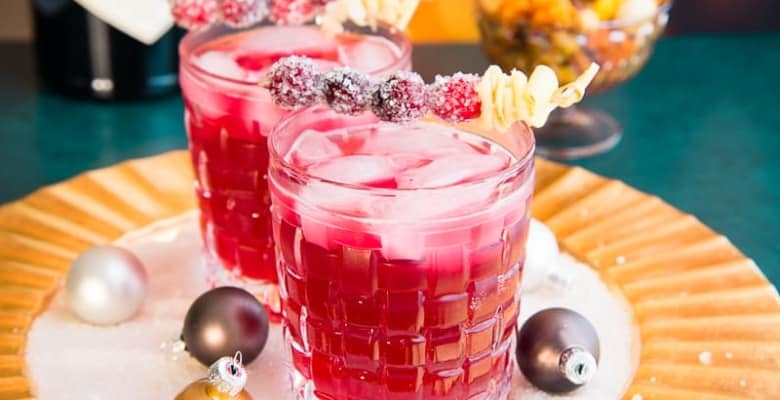 Alternatives to the Ginger Beer:

Hi the looks delish!
May I please know what you’ve used to garnish please?

Hi Bree. I beat one large egg white until frothy and brush it over fresh cranberries, which I then rolled in coarse sugar. I then shaved some fresh ginger and furled it before sticking a toothpick into the furl. Then I threaded the sugar cranberries on the toothpick.

You’re welcome, Thad! Thanks for stopping by and for joining us in this culinary journey!

This cocktail truly was a hit! I did a zoom call with my girlfriends over the weekend and made this before hand and now all of my friends want the link to this recipe because I couldn’t stop raving about it!!