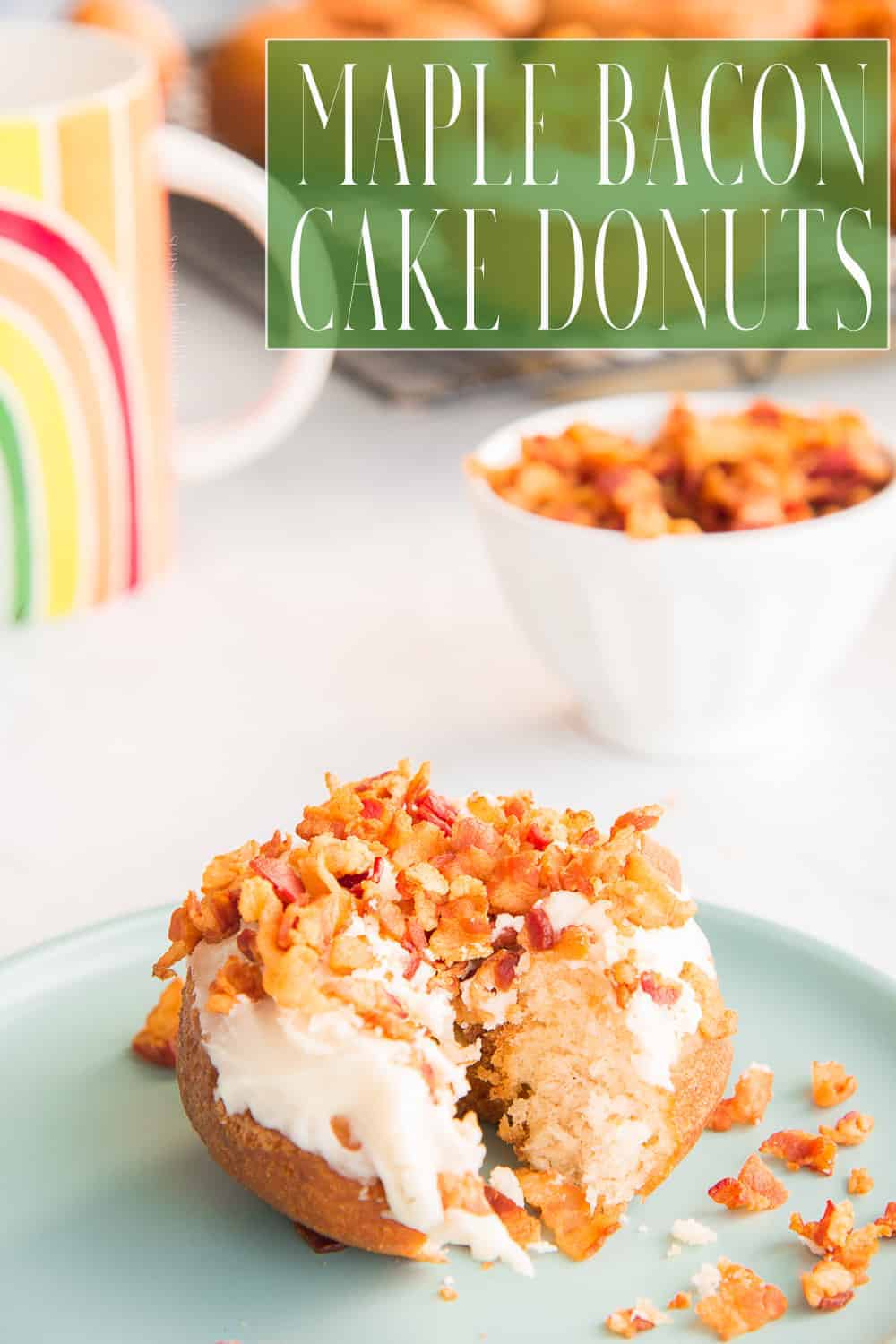 Why don’t more mornings begin with buttery, maple-glazed donuts garnished with a generous sprinkling of real bacon bits? I’m willing to bet if more people ate these Maple Bacon Cake Donuts for breakfast, the world wouldn’t be so hostile. If you’re looking for a new recipe to add to your busy morning routines, I invite you to peruse this one. You won’t walk away disappointed. 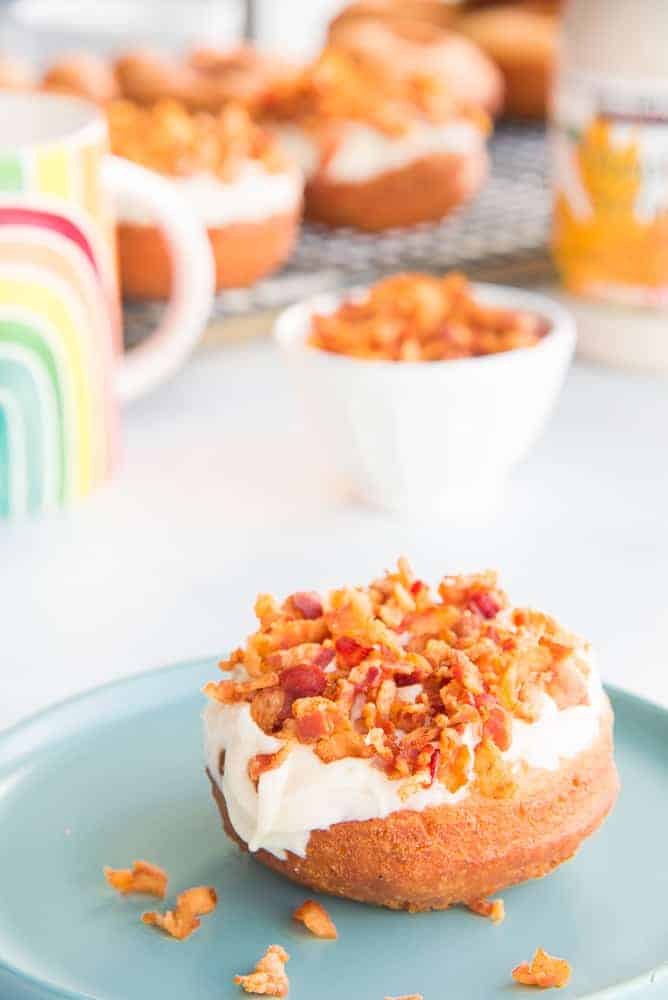 Why Maple and Bacon Cake Donuts?

I feel like autumn screams maple. I may think this way because I prefer its flavor to pumpkin. Maple season doesn’t actually begin until mid-February, yet, and still, come September, I start making (and eating) maple everything.

When you pair maple and bacon together, you get the ultimate sweet and salty vibe going on. Do yourself a huge favor and take advantage of all the smoked bacon options out there. Hickory or mesquite-smoked bacon will add a smoky element to a flavor profile that is already intoxicating.

There’s also nothing simpler to serve your family than cake donuts as far as breakfasts are concerned. If you prep these the evening before you want to serve them, that makes it even easier. These maple bacon donuts are certainly one of those recipes to get the family involved in making, especially the kiddos.

What do I need to make Maple Bacon Cake Donuts? 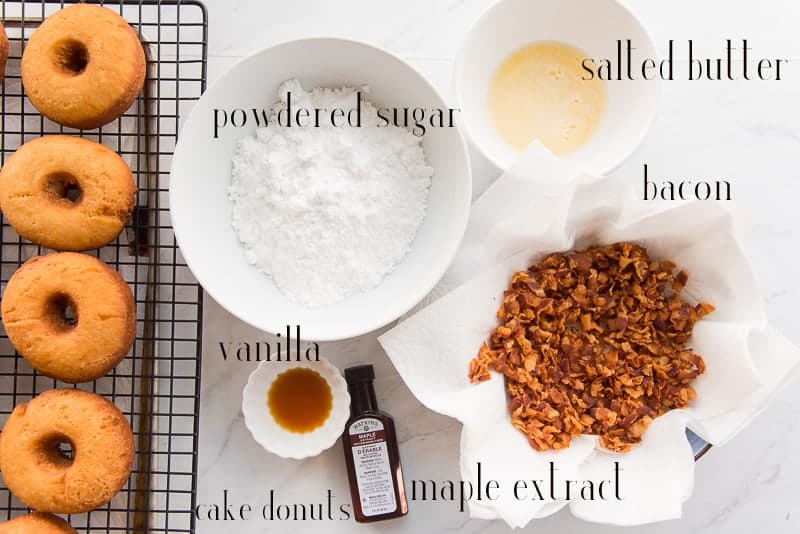 You may wonder, “Why not maple syrup?” Well, we end up adding maple syrup to thin the glaze out, but since it adds sweetness to the glaze, we don’t want to rely on it solely for the maple flavor. Instead, we use the maple extract, which has tons of maple-y flavor, in the glaze.

You’re going to mix everything in a mixing bowl with a whisk, so grab those too.

Do I have to make the cake donuts?

While you don’t have to make your donuts from scratch, my Easy Cake Donut recipe is named so for a reason. It’s easy. And they’re tasty. Plus, you know what’s in them and that they’re fresh.

As with my other cake donut recipes, you can get help from the store. Pick up a dozen cake donuts from your local donut shop. You can also use yeast donuts for this recipe. The grocery store’s bakery section also has plain cake donuts, so they’re another option for sourcing pre-made donuts.

This recipe will make enough glaze to cover one dozen donuts generously. But you can also freeze it later. We’ll get to that in a minute, though.

What types of bacon are best in this maple bacon recipe? 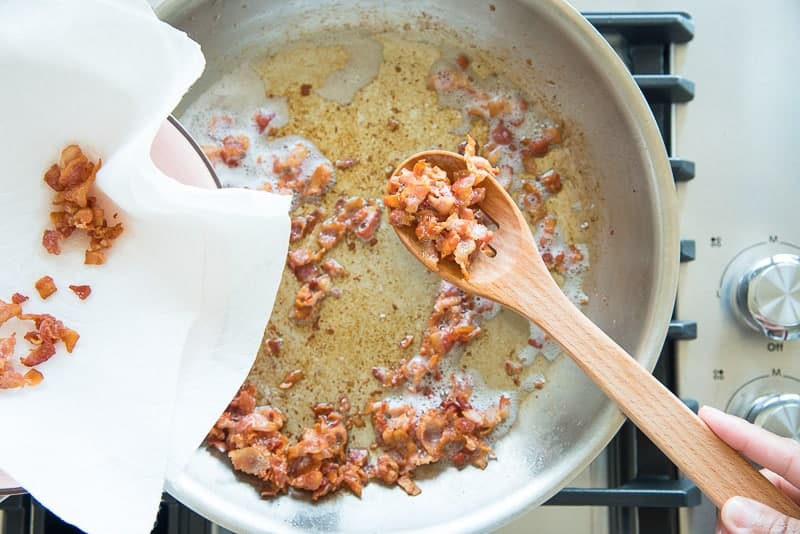 The most important thing in this recipe is the bacon. Well, at least to me, it is. But, you first need to prep it by cutting the slices into 1/2-inch thick strips. I use a full 12-ounce pack of bacon for this recipe. Just cut each slice into strips across its width. Add the bacon to a cold sauté pan and turn the stove to medium. Allow the pan to heat up with the bacon in it. Heating the pan with the bacon already in it renders as much grease as possible without burning the bacon. Cook the bacon for 12 minutes, stirring and moving it around to break up the strips. Once the bacon is golden brown and crisp, use a slotted spoon to transfer the pieces to a paper-towel-lined plate.

I prefer to use hickory or mesquite-smoked bacon for this recipe. They give the donuts a smoky flavor that blends well with the maple and buttery donuts. But, other kinds of bacon, like applewood-smoked or maple bacon, will also work here. Yes, plain ol’ bacon will do, too. Canadian bacon isn’t a great idea because it doesn’t crisp up the same as cured bacon does, nor does it have the flavor you want here.

I’m not a huge fan of turkey bacon. My brother-in-law loves it, and we have a running joke that it’s like eating vinyl records. But, I know that religious and dietary restrictions may make it necessary. If that’s the case for you, prepare your turkey bacon the same as if it were from a wee little piggy.

Set the bacon aside to cool while you prepare the glaze.

How do I make the maple glaze? 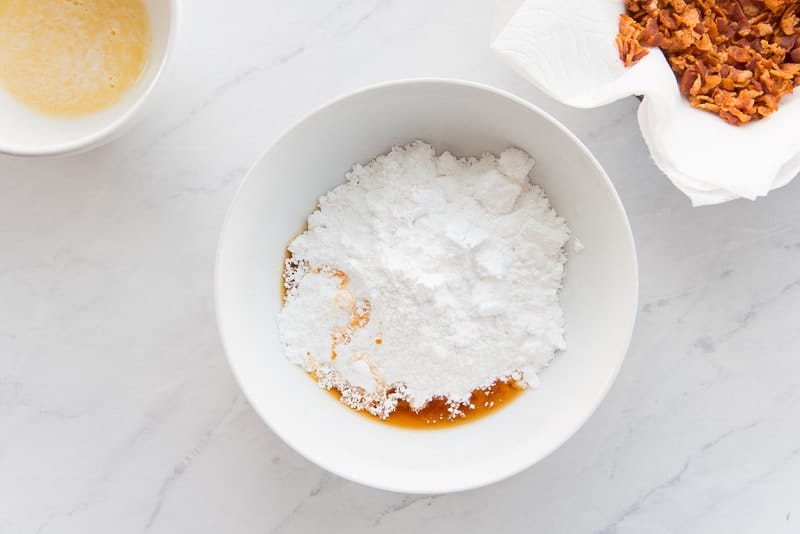 The rest of this recipe comes together stupid-fast.

Do I have to use maple extract? 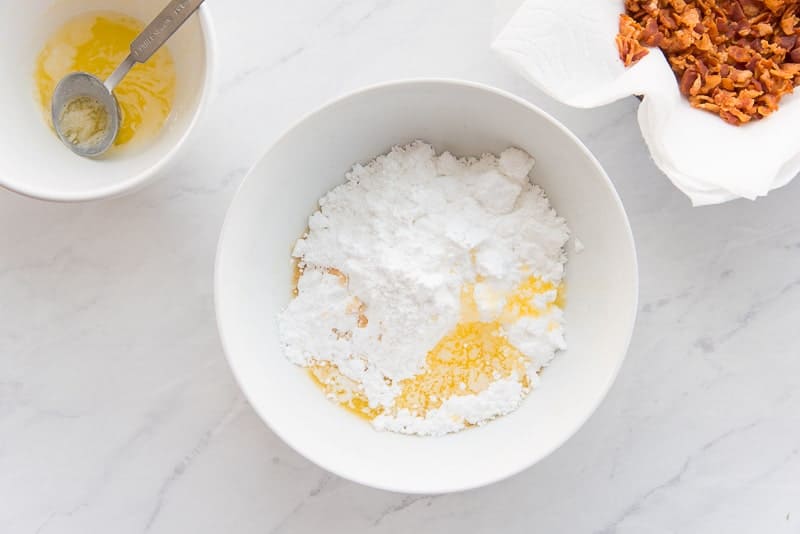 Again, you don’t have to use the maple extract, but it’s such a concentrated flavor that a little goes a long way without making the glaze too sweet. If you were to omit it, your glaze wouldn’t have the strong maple flavor you want it to have.

If you only want to use maple syrup, you would do well to reduce the amount of sugar in the recipe by 1/4 cup. You won’t have as much glaze, but you also won’t need a lot of syrup, and the glaze won’t be overly sweet. If you love super-sweet donuts, go ahead and do your thing. Make it as instructed and replace the maple extract with maple syrup.

Next, add the melted salted butter. We use salted butter to offset some of the sweetness of the sugar. If you only have unsalted butter, use that and add a pinch of kosher salt to the glaze. The melted butter also helps the glaze develop a nice crust that will keep it from running all to hell after you dip the donuts in it. Because the fat solids harden, it creates a slightly hard layer on the surface of the glaze.

How much do I thin my maple glaze? 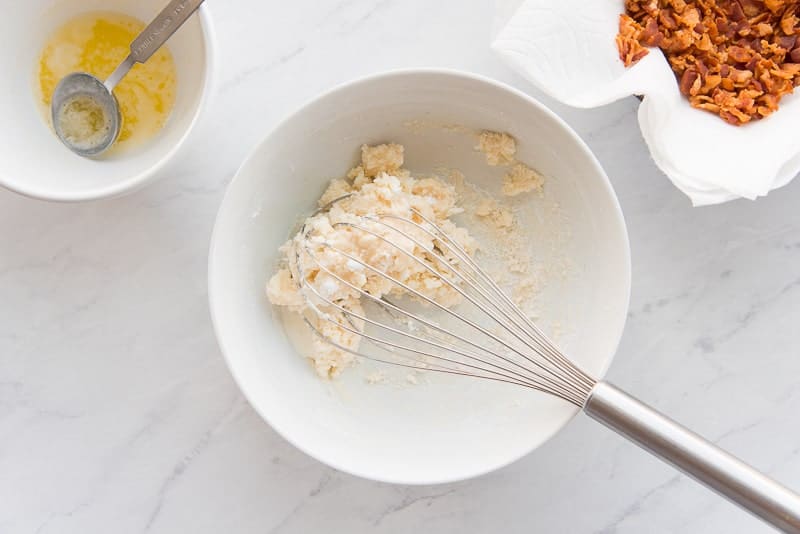 Use a whisk to stir together everything in the bowl. You’ll notice the mixture will clump up almost immediately. Part of the reason mine clumped so much was because my butter was pretty cool. I popped the entire bowl into the microwave for 15 seconds, and it loosened up quite a bit.

But you’ll still need to thin it out, and that’s where the maple syrup comes into play. Add a tablespoon of syrup to the bowl, whisking to thin out the glaze.

Can I use imitation maple syrup for this? 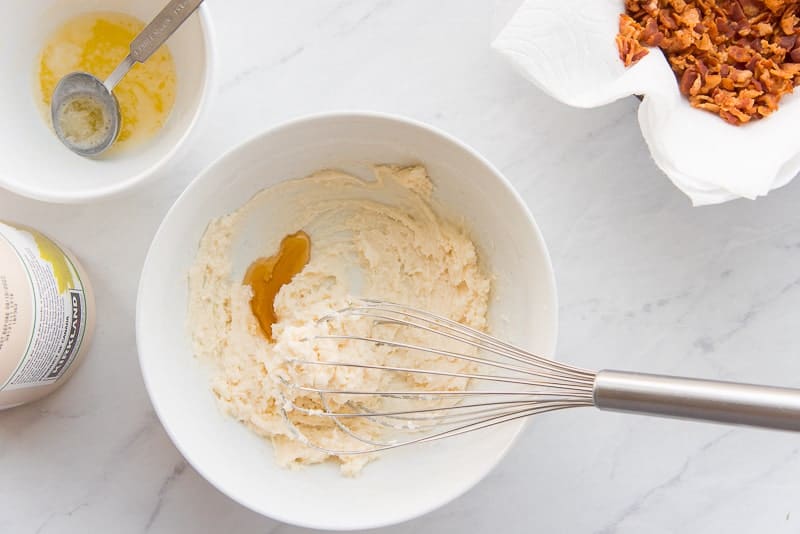 I prefer to avoid anything with “imitation” on the label. When it comes to imitation maple syrup, you might as well use dark corn syrup and save money. That’s all it is, after all. I know that not everyone’s budget is the same, but if you can buy pure maple syrup, even a small bottle, you’ll see it’s money well spent.

Keep thinning the glaze out with the maple syrup a tablespoon at a time.

How do I know when the glaze is the right consistency? 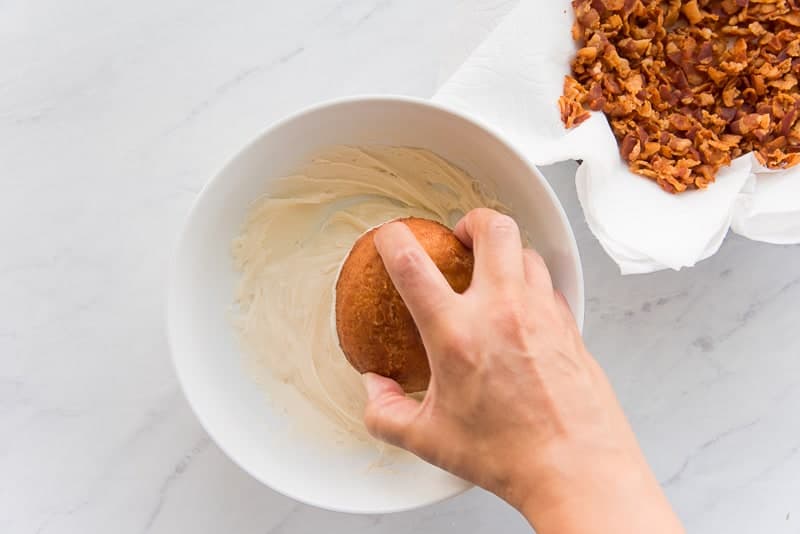 The glaze will be thick enough to hold ribbons left by the whisk but thin enough for you to dip the donut in and pull it out without it getting stuck. You want the consistency to be like a loose cream cheese frosting or like sour cream.

If you think you’re adding too much maple syrup, but the glaze is still too thick, switch to adding milk (even plant milk will work) instead. Also, keep in mind what I said earlier about the butter solidifying. If, after adding two tablespoons of syrup, the mixture is way thick, pop the bowl into the microwave for 15 seconds. Heat it and give it a whirl with the whisk to see if that thins it out a bit.

What do I do if my glaze is too thin?

If you went a little overboard with the thinning, add a couple of tablespoons of powdered sugar to the mix to thicken it back up.

Once the glaze has reached the proper consistency, start dipping your donuts into it.

How long do I wait before topping the maple glaze with the bacon? 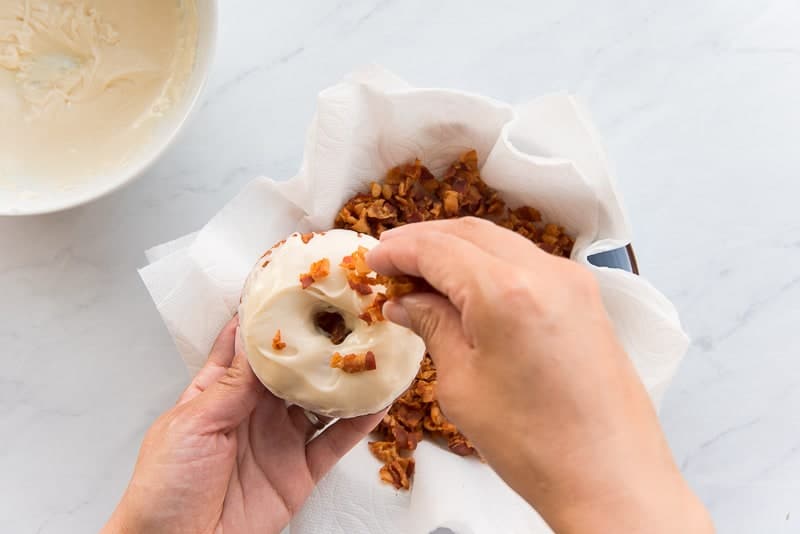 It’s important to wait about 30 seconds after dipping your donuts in the glaze before you top them with the bacon. The glaze needs that time to start setting up. If you were to dip them straight into the bacon (or sprinkle the bacon on), you’d see the bacon pieces will start sliding off the donuts. That will not only ruin the look of your donuts but make you sad.

Instead, dip all of the donuts. Once all the donuts are glazed, you can begin topping the first ones you dipped with the bacon pieces. I sprinkle them on. Then I give them a little pat to nestle them into the glaze. You can also flip the donuts, glazed-side down, into the bowl of bacon bits.

Keep “spranklin'” and chugging along until all of your cake donuts are bedecked in bacon.

How do I serve these Maple Bacon Cake Donuts?

I serve these maple bacon cake donuts with fresh fruit to assuage the whole “you gotta eat healthy” angel that sits on my shoulder. For some reason, I think strawberries taste amazing with these. Peaches and mango also goes well with these donuts.

You can serve these with a Breakfast Shake, orange juice, milk, or café con leche. Hector eats his with black coffee. He’s a psychopath, but we love him.

These donuts would be amazing on a breakfast buffet. Mixing and matching these with other cake donut flavors from the site, yogurt, fresh fruit, charcuterie, and your preferred drinks? Shoot, I’m down for that type of party.

What’s the best way to store them? 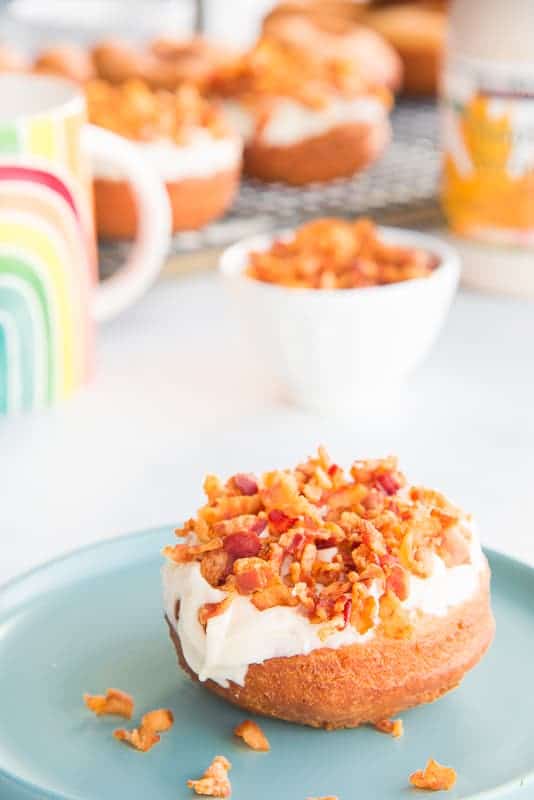 Store any leftover donuts in an air-tight container at room temperature. I usually put the leftovers into a storage container, separating them with wax paper (if I have a ton leftover). That usually keeps the underside of one from grabbing the toppings off the one beneath it.

Avoid storing the donuts in the fridge as that makes them go stale faster. However, if you have an aversion to storing them on the countertop and want to keep them in the fridge, you can pop them into the microwave to warm for 15 seconds.

How long are they good for? 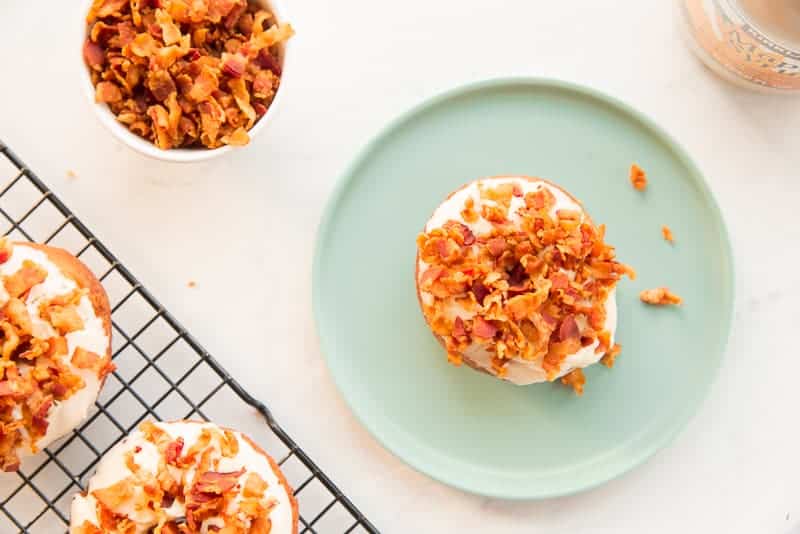 They’re fine on the counter for 1-2 days, though on the second day, they’ll start to go stale. If you store them in the fridge, you can keep them around for up to 3 days, though they’re likely to be hard as bricks by that time.

Can I freeze these donuts? 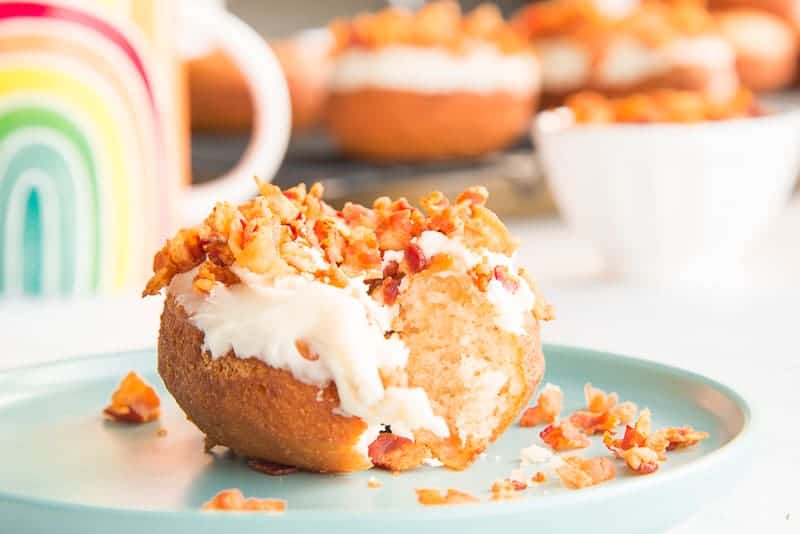 If you want to freeze your donuts, do it before you top them with the glaze. The glaze, bacon, and donuts can all be wrapped up and frozen for up to two months. Thaw them all completely in the fridge overnight, then proceed with the recipe as instructed above.

Fall is here, and with it comes all of these amazing fall recipes. Be sure to check out my other cake donut recipes. Don’t forget to share this recipe and pin it to your breakfast or fall boards, as well. 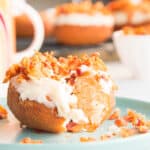 Print it Pin it Rate this recipe
5 from 11 votes 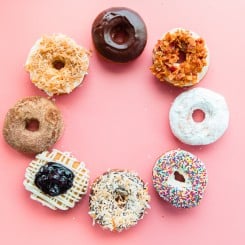 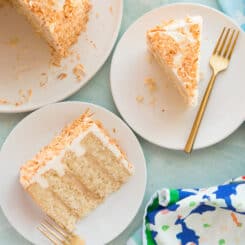 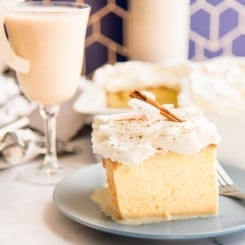 That maple glaze was good enough to drink on its own, but the bacon took it over the top! Such an amazing sweet and salty treat!

That maple glaze is special!