September 20, 2017 by Marta Rivera
This quick-fix flatbread is a complex of delicious flavors. Use ripe figs for optimum flavor.
Get Recipe
27Shares 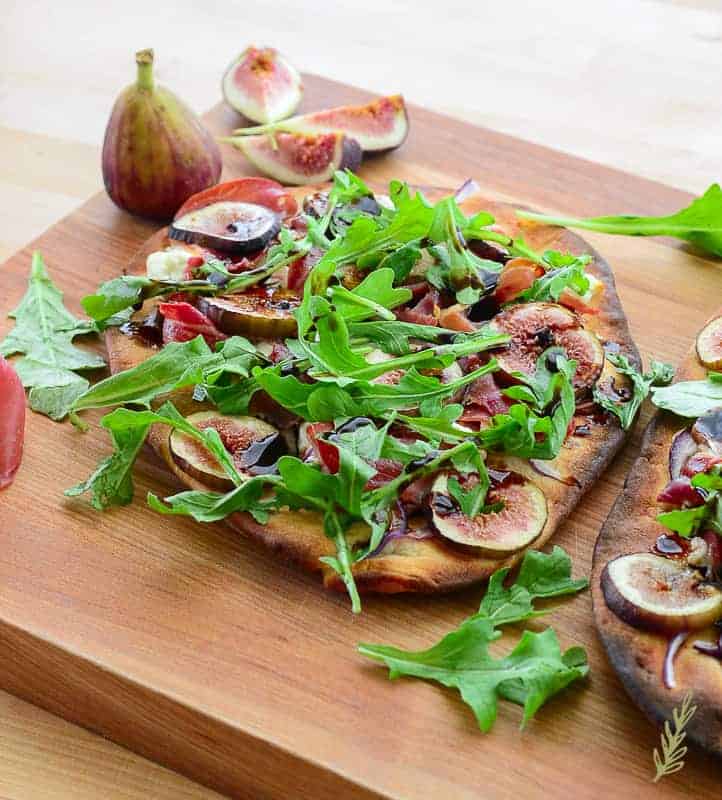 One week of school is officially behind us! I’m still partially sane, as are the munchkins. The Twins and I have fallen into a nice scholarly groove; so much so, we have ventured into our homeschool culinary course, as well. Chèvre and Prosciutto Flatbread topped with Figs and Arugula was our first recipe of the school year.

Home Economics, rumor has it, is no longer a subject taught in most schools. The first time I heard that, my heart broke. In my opinion, home economics and culinary arts, along with shop, are some of the most important subjects our kids can learn. Granted, I’m biased, being as though I (and the Soldier) are both graduates of vo-tech high schools. But, even if I hadn’t graduated from such a school, I still value the importance of learning a trade. Suffice it to say, our children will be learning one, or more, trades during their school career.

Naturally, culinary arts is number one on the list of trades. Not only because it’s my job, but because it’s a necessary skill. You’ve gotta eat, so you may as well learn how to feed yourself. A friend recently shared a post of mine on social media and told a friend of hers to make it. It broke my heart to read the friend’s reply of, “There’s too many steps.” There were six steps to be precise. Two of those included adding sugar and cream. Two of the others where optional. In reality, there were only four steps in that recipe. Four steps to have an amazing, hand-crafted recipe in your belly. It made me sad to think that people no longer think they’re worth four steps.

My mission with this blog- hell! with my life- is to impress upon my readers that you are most certainly worth the effort it takes to create great food. And I’m starting at home- with my Twinks, not the Soldier. I have strict rule for the Soldier. I refuse to teach him how to prepare meals like this flatbread topped with figs and prosciutto and deliciousness. You know why? Because what if I die? What if I leave him a widower and he uses the skills I taught him to woo another chick? She’ll be all, “Oh, my God, Hector!! You’re such an amazing cook!” and I’ll have to come back and haunt the crap outta them. No, thanks. I ain’t got time for all that. He can remain culinarily ignorant.

But, not my babies. And not you. I’m going to teach you because you’ll never betray me, will you? 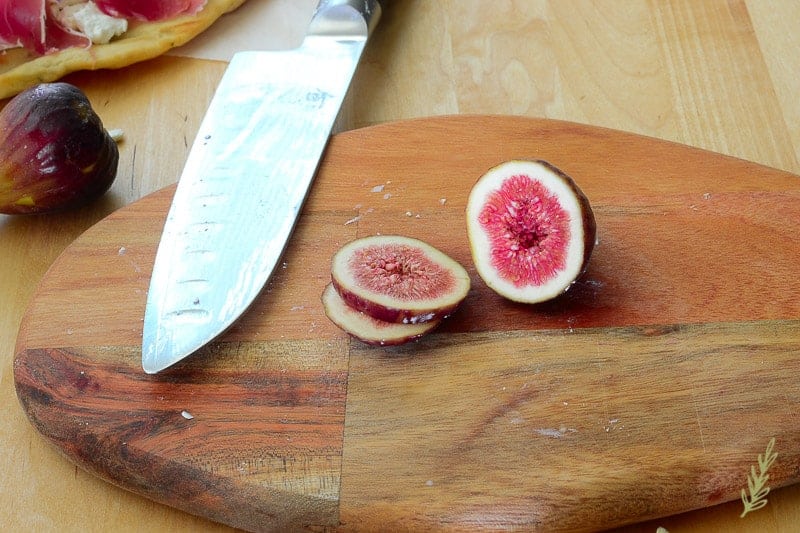 In teaching culinary arts, I must educate you on your ingredients. The Twinkies found the subject of figs to be highly…interesting, to say the least. In times past, I’d venture to say, before modern science gave us all these new, fandangled methods of horticulture (<–another TRADE!), the fig was pollinated in a very, well, pretty gross, way. Long story short, a female fig wasp would crawl up into the center of a fig, pollinate the female flowers, lay her eggs and…die. Then, having developed first, the male wasps emerge from the fig, inseminate the remaining female wasps and dips out. The guys come back to chew an escape route for the females, who have since pollinated the fig’s male flowers, and the girls have a just a short time to find a new fig tree and start the cycle all over again.

So, yeah. See that hole in the center of the sliced fig? That’s where all the insemination and death went down. Imagine how thrilled the Twinks were to get a sex-ed, biology and culinary class all before lunch? Over the moon, they were.

These days, however, figs aren’t as icky as they were in times past. The figs that I’m using here, and many of the ones you’ll find locally available, are common figs that don’t require the internal sex and death scene of their cross-pollinated cousins. Black Mission, Kadota and Brown Turkey (like those pictured) are all free of wasp guts and, well, you know what. Choose figs that are soft when gently pressed and which lack an excess of green, overall. Depending on the variety you purchase, the ripened figs should be dark purple or brown. Don’t worry if you see white substance on the stem, it’s just the sap. Not, as the boy Twink speculated, semen. 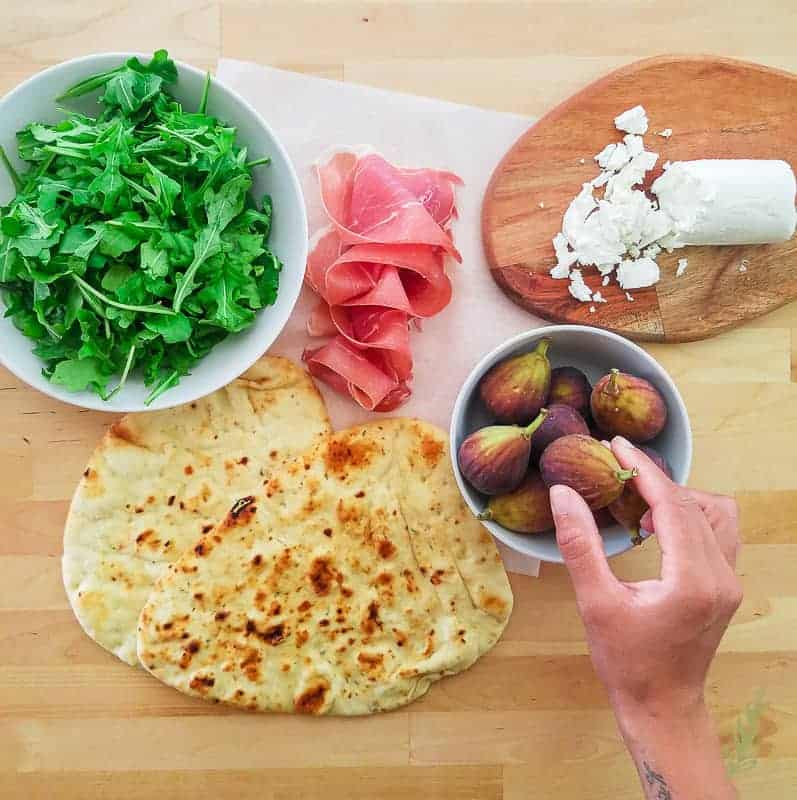 Now, part of the reason I chose this as the Twins first recipe of 8th grade is because of how complex the flavors were, yet how easy it is to prepare. Teaching people about how flavors, textures and colors play such vital roles in cooking is, hands down, my greatest privilege. Prosciutto, a cured pig’s leg from Italy, is crisp when cooked, and briny; whereas the chèvre (goat’s milk cheese) is creamy and tangy. The soft, sweetness of the ripe figs, contrasts with the bitter bite of the arugula. The spicy red onion is amped up by the acidity in the balsamic vinegar drizzle. And the crisp, garlicky naan bread is the perfect foundation for it all.

I make most of my recipes with my focaccia bread. You can grab the recipe (and tons more) from my cookbook. I sometimes don’t have any focaccia made, and I also don’t have a tandoor oven in the backyard (you know, HOA and all). Since that’s sometimes the case, I always keep a package of Stonefire Naan on hand. I’m not a fan of flimsy flatbreads, and this brand has the best-tasting, heartiest breads around. No, they’re not paying me to say that, so you know I ain’t lying. I chose the garlic naan for this recipe to add more layers of flavor to the dish.

Typically, I set the oven to a low broil and toast both sides of the bread (under close watch), directly on the rack. Pre-toasting like this is the best way to keep the bread from becoming soggy when you start loading on the toppings. Just get it a little crisp, five minutes tops. Pull out the bread and start the process of layering. 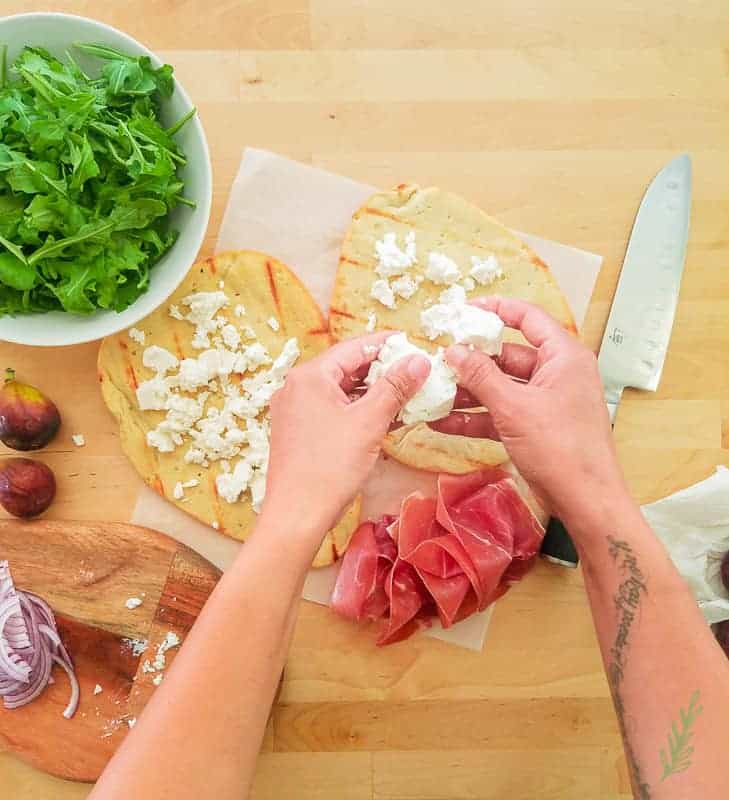 Your chèvre should be soft enough to crumble, so do just that. Break off walnut-sized chunks of cheese and scatter them on top of the toasted naan. What the Twins pointed out, to my great surprise and unGodly pride, was that any cheese can be used in this recipe. They suggested, and I wholeheartedly agree, the use of mozzarella, bleu, or (wait for it) camembert. I’m verklempt, is what I am. All of those cheeses, and more, are suitable substitutes. Even the everyday cheeses like swiss, cheddar or gruyere, I recommend. 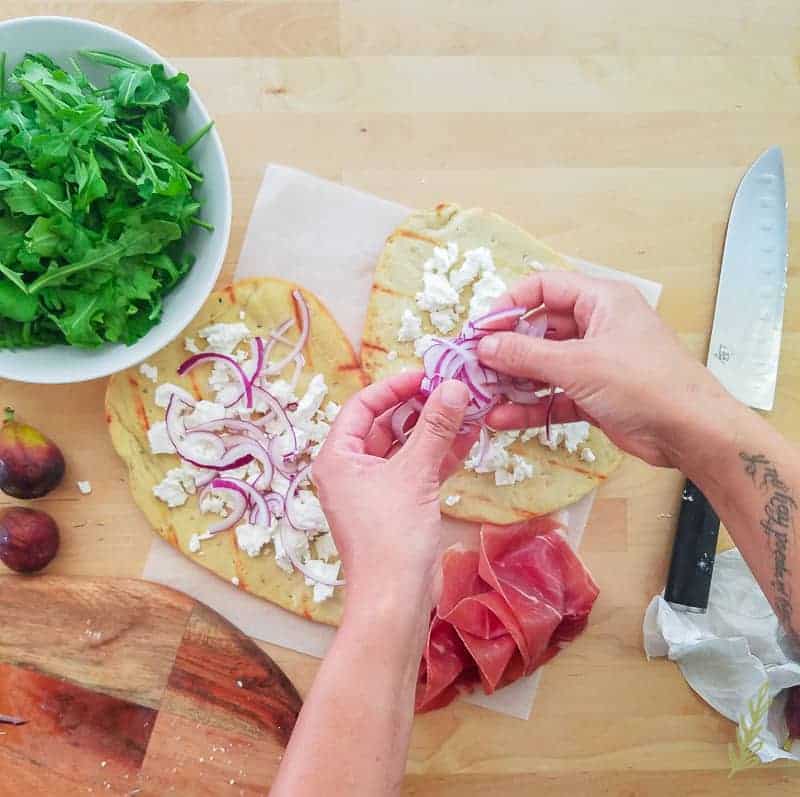 Top the cheese with your thinly sliced red onions. A great alternative would be caramelized onions, here’s a great recipe for them, or you can use yellow onions. Pickled onions would be a great twist as well! I’m making myself hungry again. 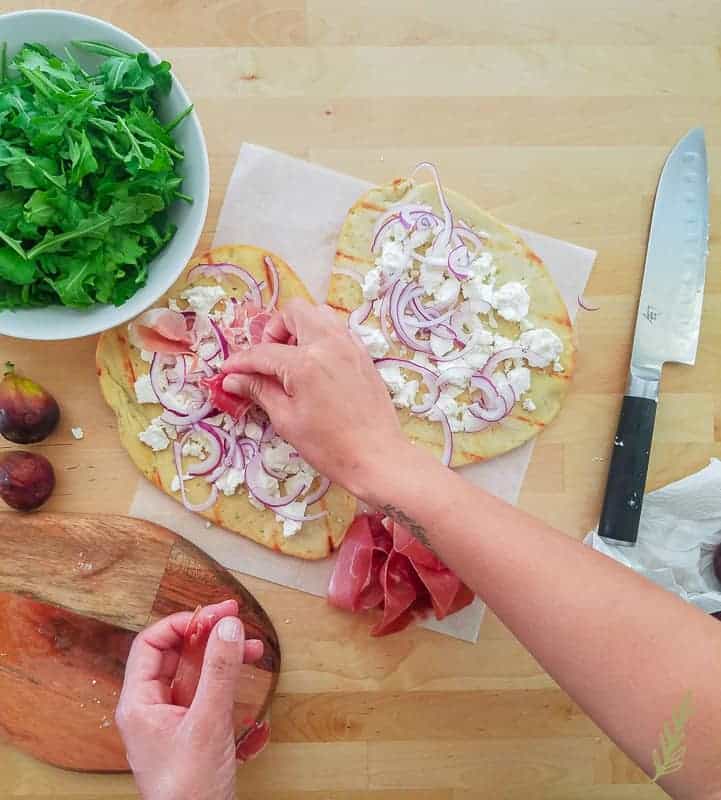 Tear the prosciutto into 2″ pieces and float them on top. I say, “float,” because you want the prosciutto to crisp up under the broiler and not sweat. If you pack them onto the surface of the naan, they’ll melt with the cheese and you’ll miss out on that crunch that adds so much. Be as liberal as you want here. You can never go wrong with prosciutto. Using pancetta, bacon or Iberico ham is always an option as well.

Follow your prosciutto up with the slices of figs. Scatter them about so they will get ample heat. The caramelization of the sweet figs is not a task to be shirked. DON’T BE SHIRKIN’!!!

Go ahead and pop the naan, carefully, back under the broiler for about 5-7 minutes. Try to keep your rack on the center level of the oven. Any closer and it will char too quickly. If your oven doesn’t have a broiler that you can regulate with rack placement, just bake your naan at 450°F. Keep a close eye on it, you don’t want it to burn. If your naan starts to char, pull it. 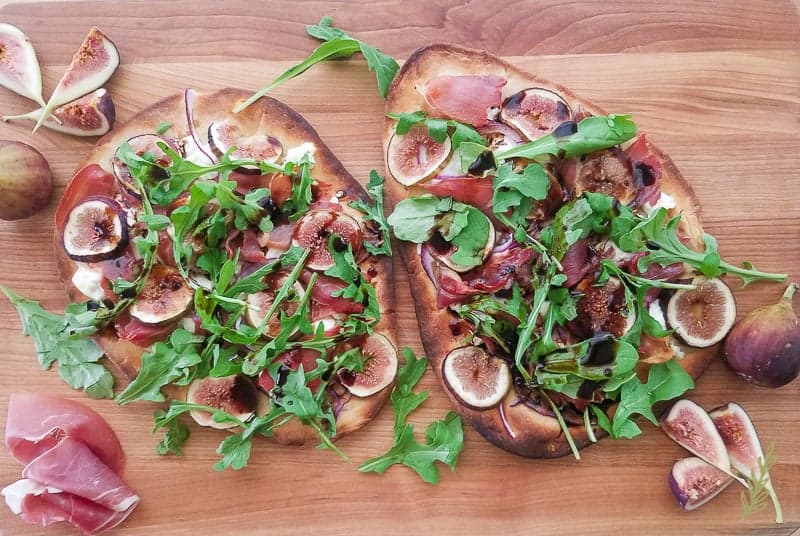 As soon as you set it down, sprinkle the arugula on top. Topping it while it’s still piping hot will give the arugula a chance to wilt, without overcooking it. Now, follow that up with a drizzle of an aged balsamic vinegar and you’re ready to dig in. Kind of like a fig wasp! Too soon? Sorry. I do hope you get a chance to try this recipe out. Better yet, bring the kiddos into the kitchen and let them help! But, what about you? What was your favorite subject in school? 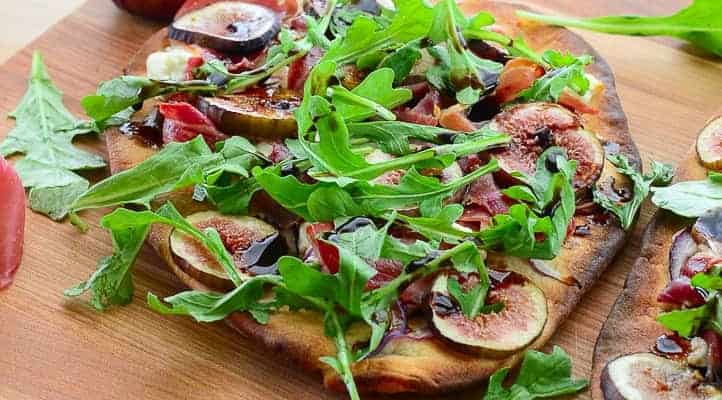 Pin this recipe for the next Home Ec lesson and check out these other insightful recipes:

I love this! Simple to make, grey so flavorful… thanks!

Glad you liked it!

Mmm these look so good! I love the idea of using focaccia, and chevre is my favorite type of cheese! xo, Brittany http://www.theblistblog.com

I love chèvre too, Brittany! Thanks for stopping by!

Oh my gosh this sounds heavenly! I love everything about it. Figs and prosciutto are so delicious together!

They are, aren’t they, Rachel! A match made in culinary heaven.

This looks so yummy! Love the red onion addition!

Yes, I always need something to add a little more kick to a recipe. The red onions do just that.

This looks so good! I have never had figs on a pizza before! Who knew to even think of that!? Thanks so much for sharing and next time we make a pizza I will have to remember this!

You must, Meli! I think you’ll love it as much as I do!

In Italy we eat a lot of figs and prosciutto, but this recipe looks beyond! Would you mind check out my page? Maybe we can follow each other and be internet friends 😀 would love that.
Love Mimi

Thanks for stopping by, Mimi! I spent some time in Catania, Sicily and loved every minute of it. Figs and prosciutto are definitely popular with the Italians.