April 30, 2020 by Marta Rivera
This San Antonio native is slick. Potent, but so tasty you don't mind it sneaking up on you.
Get RecipePrint Recipe
1231Shares 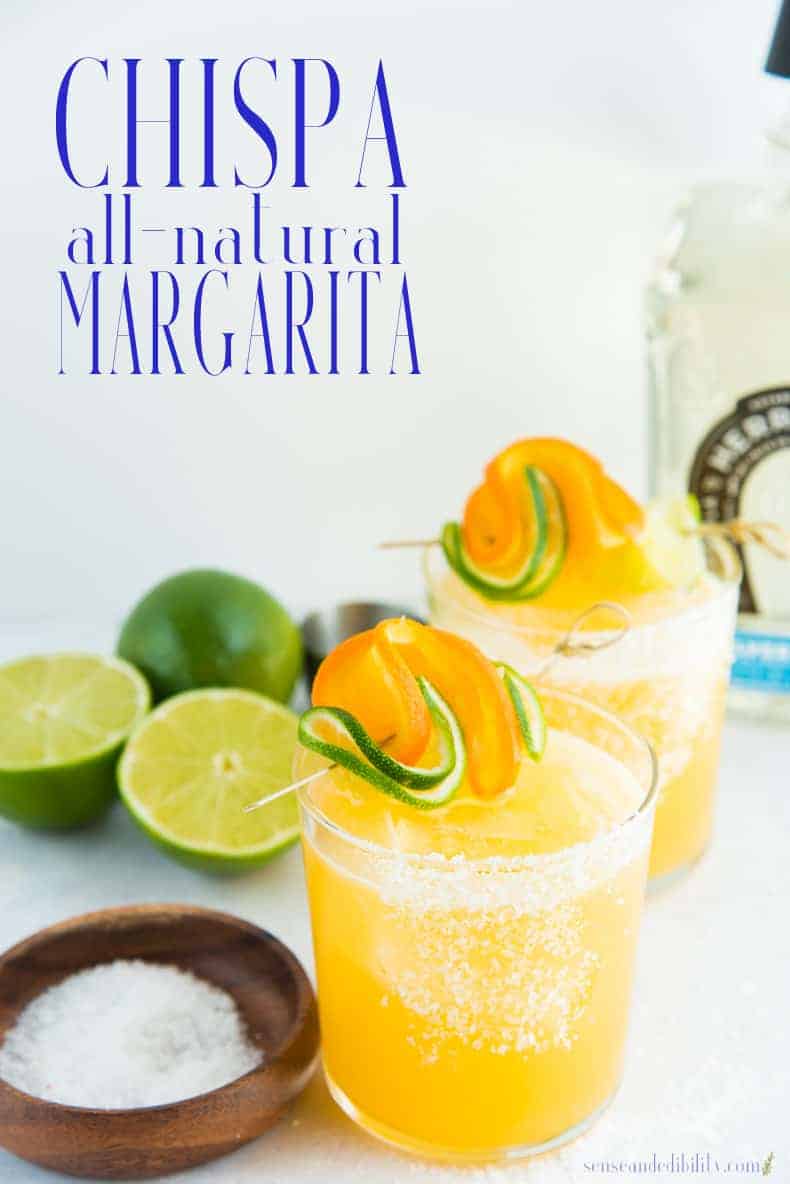 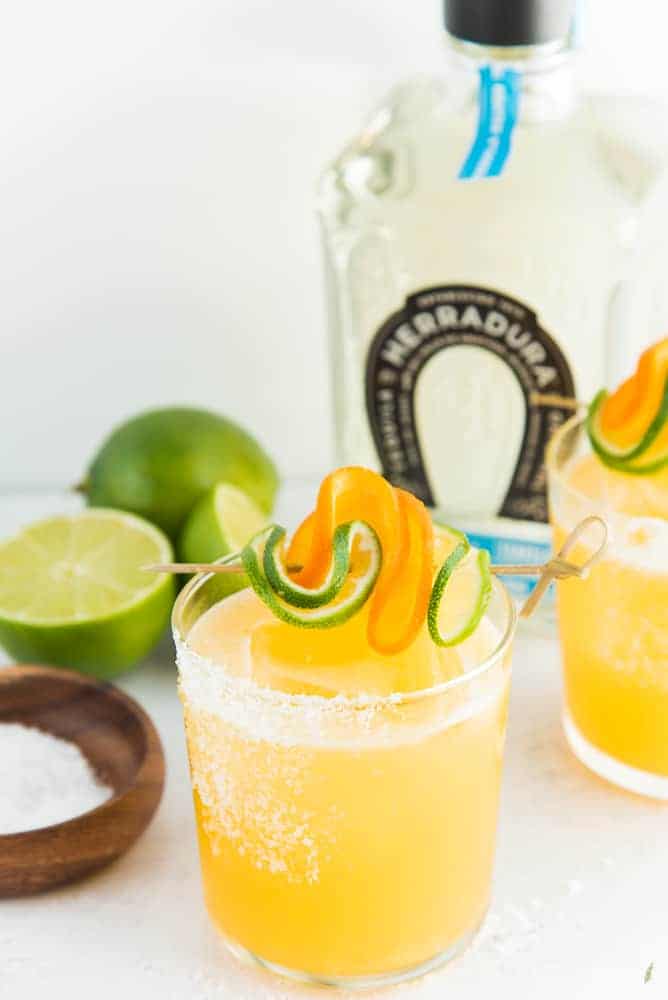 I had chispa margaritas for the first time after we moved to San Antonio. Right after we’d settled here, we hit up a nearby Mexican joint called Mirasol, which is famous for their chispas. Because I’ve never had one, I decided to indulge in a couple. Somehow, those “a couple” turned into eleventytwenty…or, something like that. Saying I was beyond my limit would is an understatement. In my defense, though, they snuck up on me.

Chispas have a reputation for being clandestine in their potency. They hardly taste of alcohol and they’re so refreshing- especially here in hot-as-hell Texas. The great thing about them is that they’re more natural than the traditional margarita. Because they don’t contain any sweet and sour mix, they just taste better. My version is even more all-natural because only contains tequila, agave syrup, and fruit juice.

What is a Chispa?

Chispa means “spark” in English. Now, I’m not a linguist, nor did I create this recipe, but I’m willing to bet it is named so because of how lit you get after drinking too many.

From the intel I’ve gathered, this margarita the chispa is a San Antonio invention. It was created as an alternative to those cloyingly-sweet margaritas that contain sweet and sour mix. Instead, orange liqueur is mixed into the margarita. I don’t know about you, but I’m more than happy to drink this version after reading the ingredients list on the back of a bottle of sweet and sour.

Besides the omission of sweet and sour, chispas are pretty much the same as a regular margarita. Because I want mine to be as natural as possible, I’m even omitting the triple sec (or grand marnier) that’s commonly used in chispas, and replacing it with orange juice. What’s that you say? You think removing the triple sec will leave you with less alcohol?? No, no my friend. I would never offer you a weak cocktail, I’m better than that. I’m replacing that orange liqueur with more tequila.

What Goes into these Chispa Margaritas? 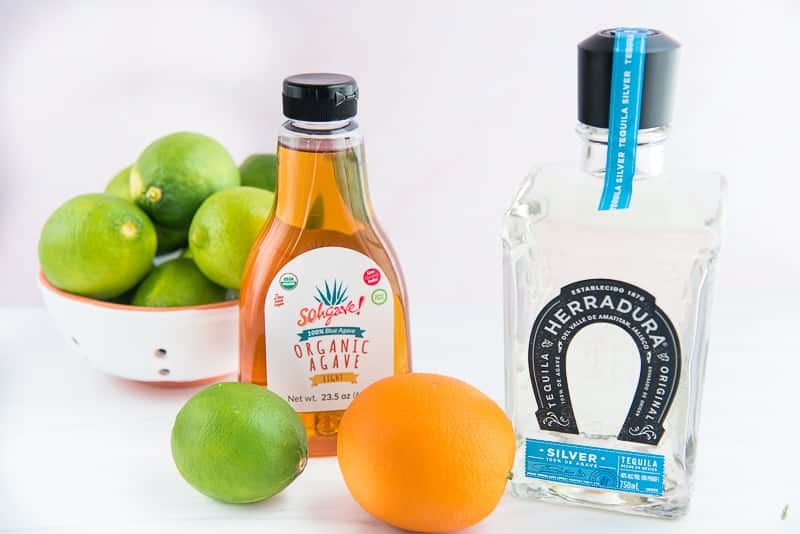 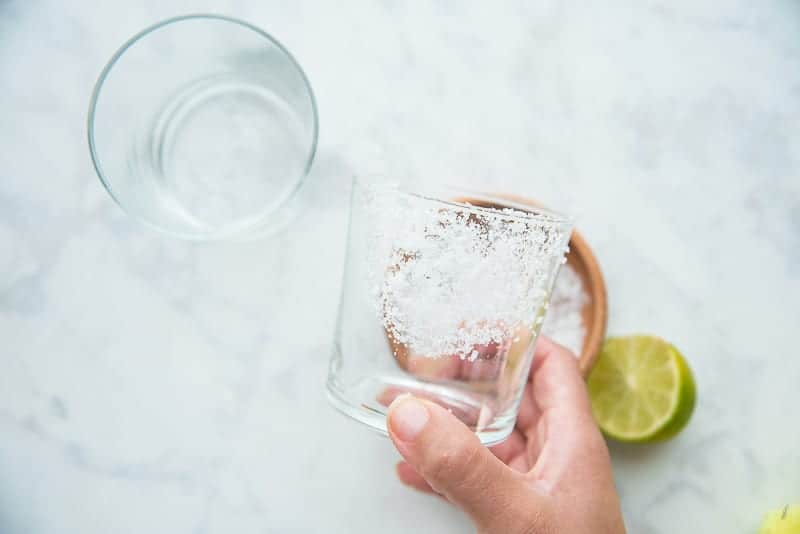 I prefer to prep my cocktail glasses before getting started on the chispa-mixing. It gives the salt time to dry against the glass, which means it won’t fall off as easy when you handle it.

To rim your glasses, use one of the lime halves to wet the side of your cocktail glass. I’ve taken to only salting half of the rim because licking around the entire glass looks kind of raunchy. Sprinkle coarse salt onto the moistened area. Set the glasses aside after they’ve been salted to allow them to dry. 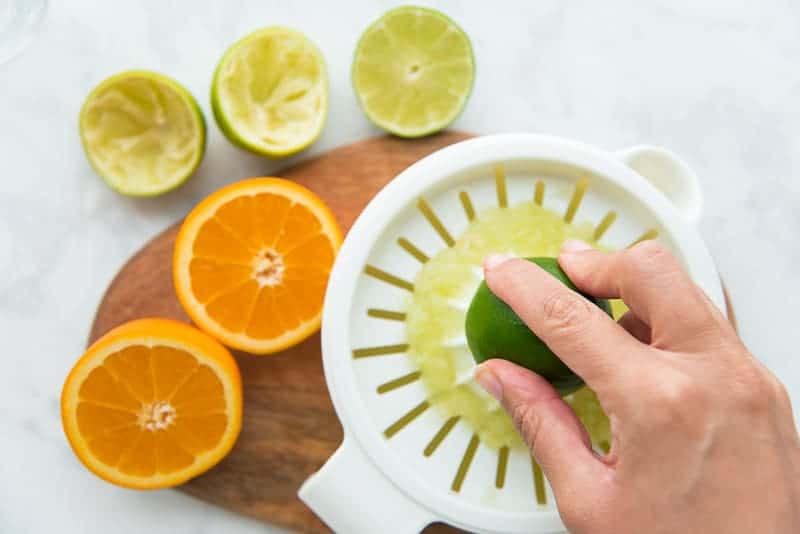 Please. Please, do not use bottled lime or orange juice to make this chispa margarita. I’m begging you. Since this is a very minimalistic cocktail, it requires the freshest flavors. Use the fresh citrus. If not for the sake of flavor, for the sake of preventing scurvy, or something.

With a citrus reamer, juice the limes and naval orange. You’ll only need a small orange juice because we don’t want orange to be the predominant flavor. 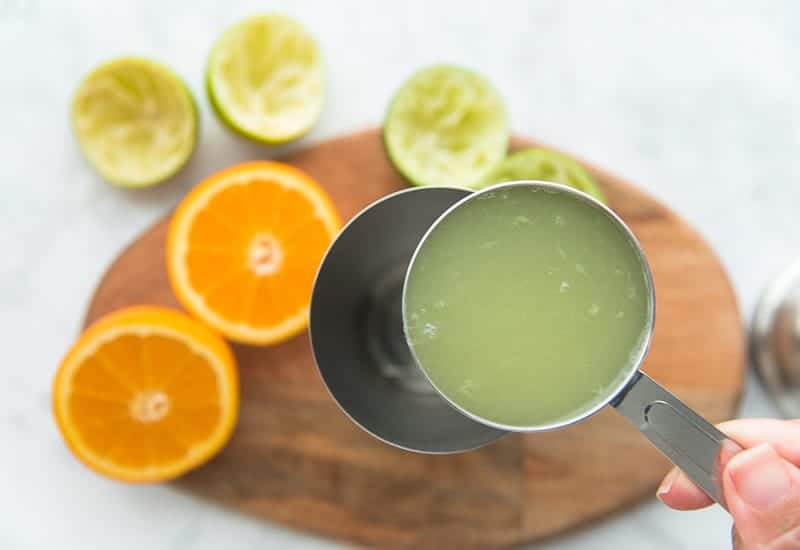 Fill a cocktail shaker with the lime juice. 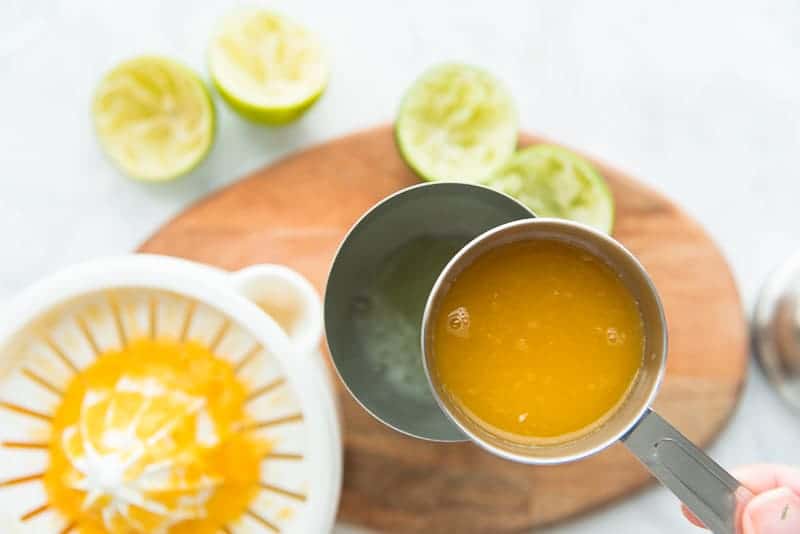 Next, add the orange juice to the cocktail shaker. 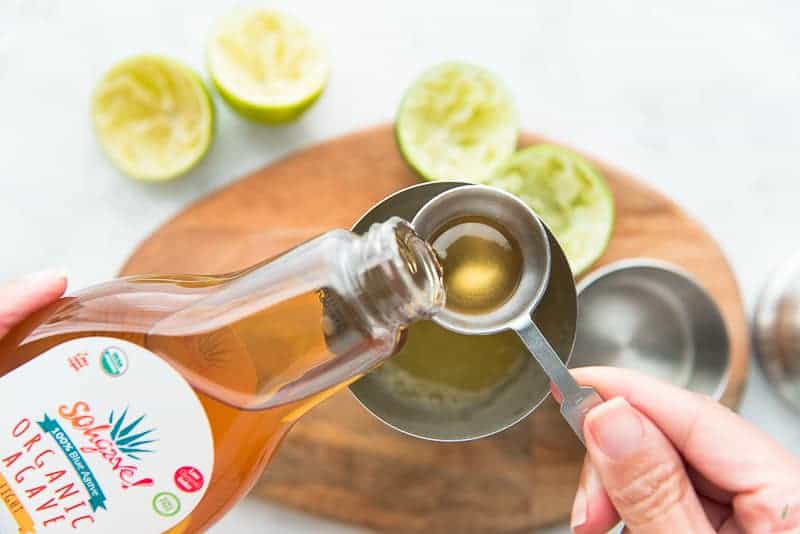 To sweeten the chispa, add 1-2 tablespoons of Agave syrup. If you’re not a fan of sweet cocktails, you can omit the agave syrup altogether. Why agave? Well, why not? Since the tequila is made with agave, using agave syrup to sweeten it just makes sense. If you don’t have agave syrup, use simple syrup, instead:

In a saucepan, stir together the water and sugar. Bring the mixture up to a boil over medium-high heat while stirring to dissolve the sugar crystals.
Once the mixture boils, remove it from the heat and allow to cool before using it in the recipe.

Ice the Chispa Base 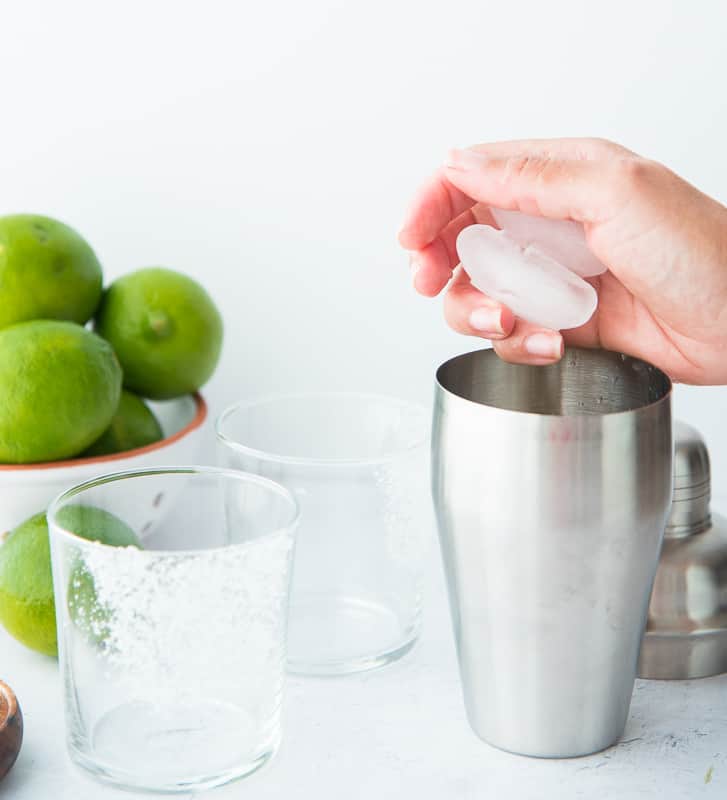 Add a handful of ice to the sweetened juices in the cocktail shaker. 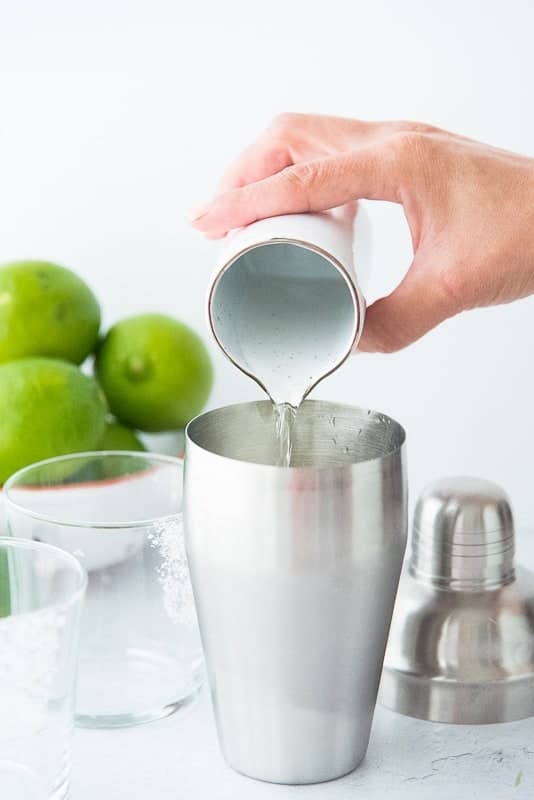 Do not use bootleg, trash tequila in this cocktail. Because we’re making a fresh, vibrant chispa, the quality and smoothness of the tequila is a priority. Raise your hand if you want a kerosene flavored chispa? Anyone? No. I didn’t think you did. If you have ratchet friends like I do (and, yes, I’m just as ratchet as they are), you’ve probably been convinced to take more than your fair share of tequila shots. When it came to my friends, we were all spending money we didn’t have on liquor, so we were scraping the bottom shelves of liquor stores and bars. We ended up doing shots of tequila mixto.

Tequila mixto is 51% blue agave tequila that’s been cut with 49% other stuff- usually sugar cane liquor. As a result, the liquor is inferior when compared to the pure, unadulterated 100% blue agave tequila. The latter is smoother, crisper, and can often be sipped like an aged scotch. You’re drinking mixto if a sip of it has to follow a lick of salt and chased with lime to ease the burn. Yes, Jose Cuervo is a mixto. Hence the reason I can no longer smell mixtos without wanting to hurl. If your bottle of tequila is brown- and it’s not a reposado or añejo- you’ve probably picked up a tequila mixto. Read the bottle’s label, if it doesn’t say “100% Blue Agave”, it’s a mixto and you need to keep it moving. Life is short. Stop drinking mixtos.

Since there’s no way to disguise the flavor of a bad tequila in this recipe, use a quality one like Herradura. Casamigos is another good tequila. When in doubt, go basic with Patrón.

Add the tequila to the cocktail shaker. 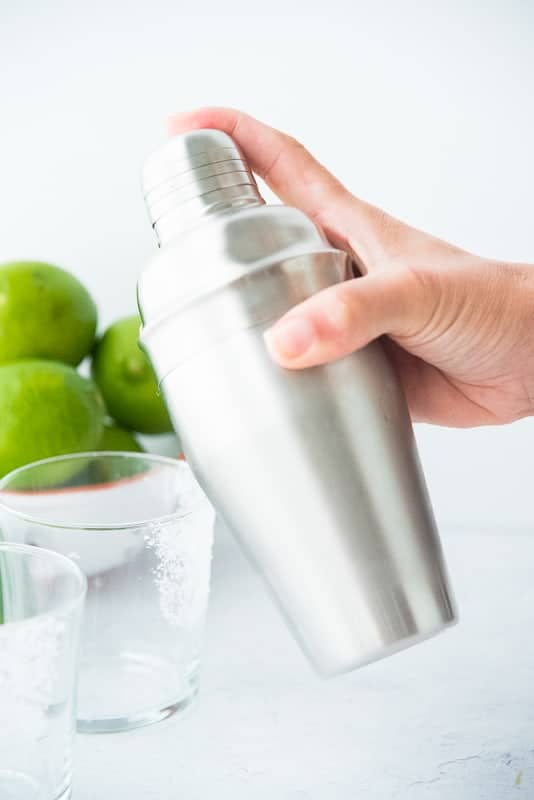 There’s nothing to it but to do it. Put the cap on your shaker and shake vigorously until the shaker frosts over. That’s an indicator that everything is nice and cold inside.

Strain the chispa margarita mixture into your rimmed cocktail glasses. Take care not to splash any on that stellar salt rim you created. 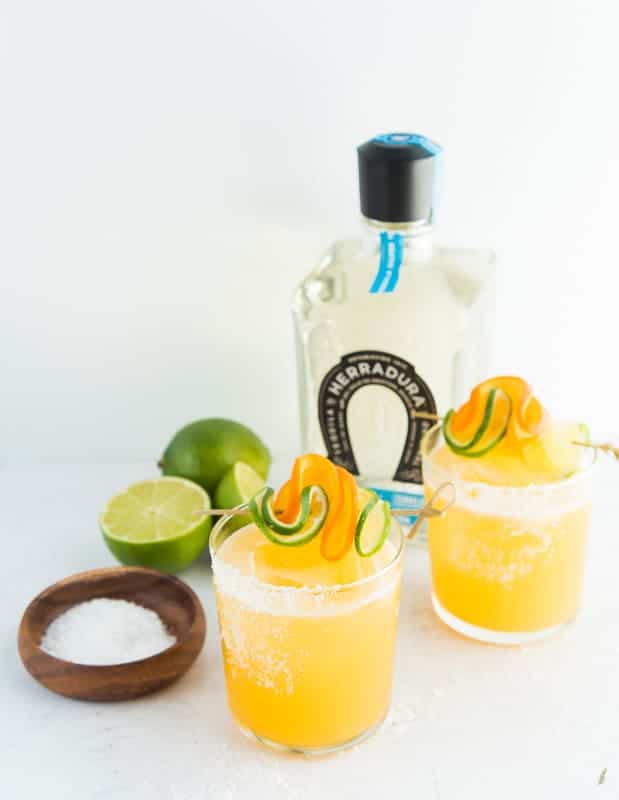 To create my garnish I went whimsical by thinly slicing a lime and an orange. Fold the two lime slices in half, then fold one of the orange slices in half. Thread the folded slices onto a cocktail pick, sandwiching the orange in the middle of the limes. I propped my garnish on the side opposite my salted rim. 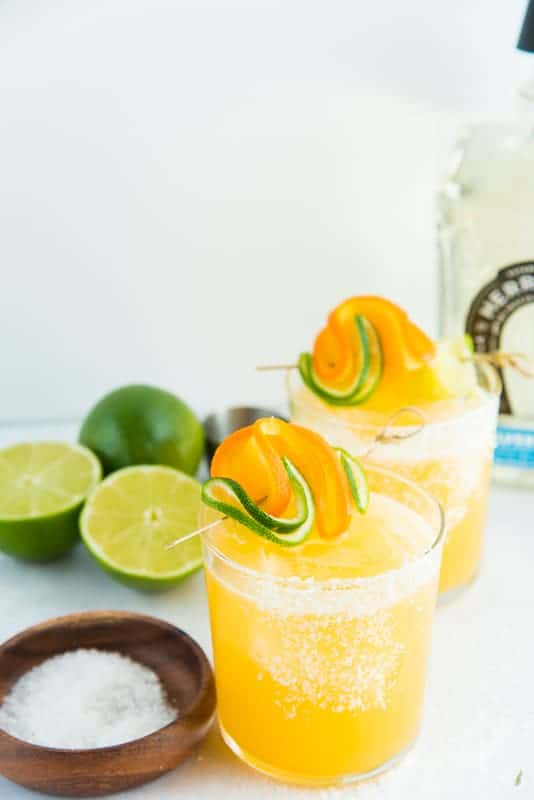 Let’s recap. What does chispa mean again? Thhaaaaaat’s right! SPARK! Spark describes the amount of power this little, unassuming cocktail has within. Disregard my reminder and you’re going to get lit. Heed my warning. This chispa margarita is smooth, crisp, and addictively refreshing. 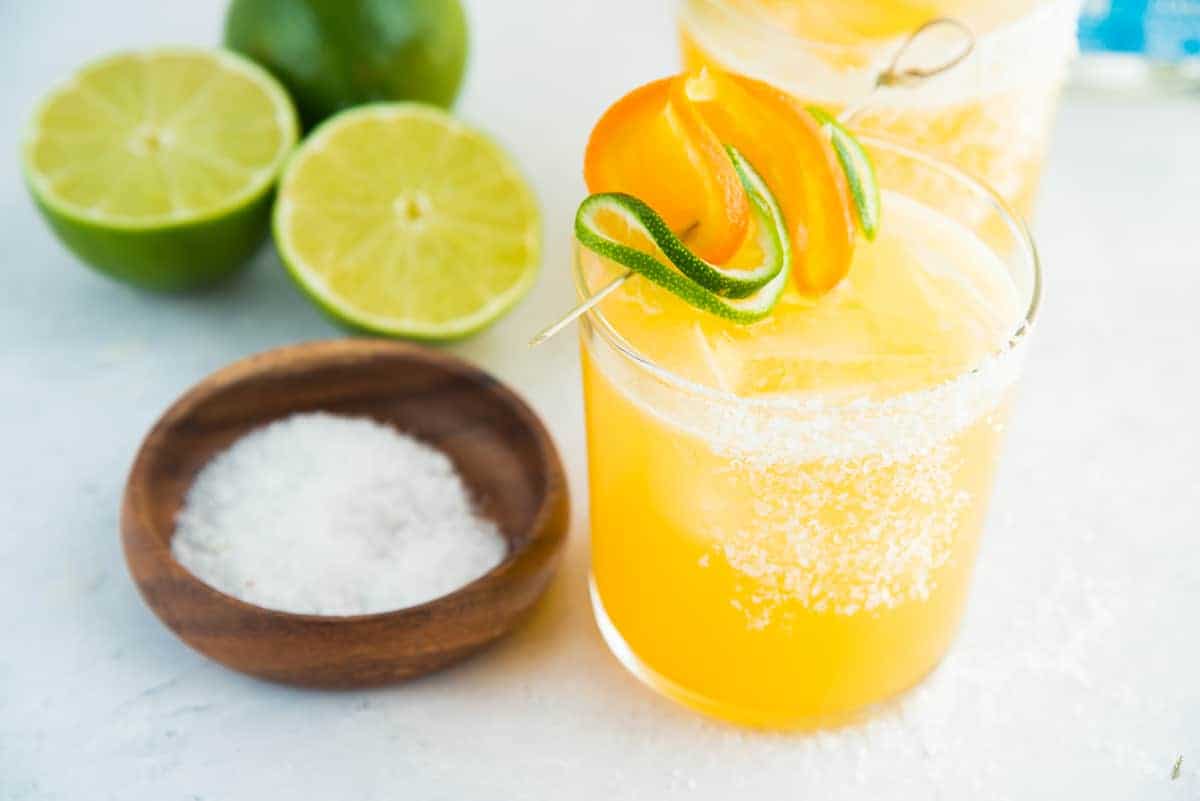 Pitcher this Chispa Margaritas Recipe for Your Next Fiesta 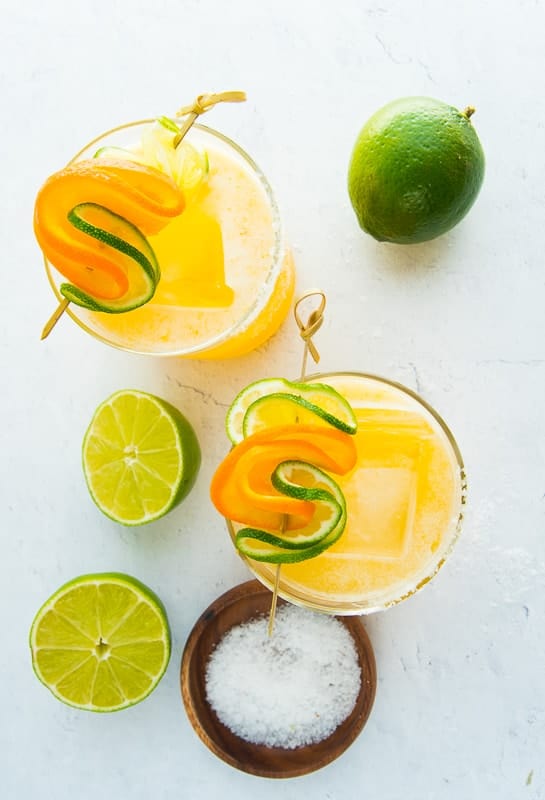 If you plan to serve this to your crew of 6 or more, quadruple the recipe and pour it into a tall pitcher. Pour to your heart’s content.

Sip a little bit of San Antonio, Texas, at home this year. With everything going on, Cinco de Mayo won’t look the same, but it can still “sparkle”.

Enjoy and be sure to share this recipe with your friends and family! 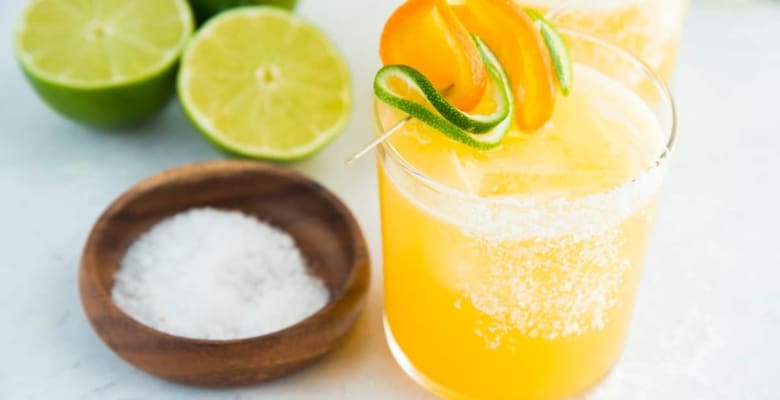 Marta Rivera at Sense & Edibility
5 from 14 votes
This San Antonio native is slick. Potent, but so tasty you don't mind it sneaking up on you.
Servings: 2
Print Pin Recipe
Prep Time 10 mins
Total Time 10 mins

If you liked these Chispa Margaritas
you’ll love my other tequila recipes: 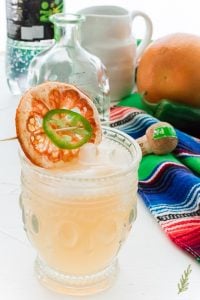 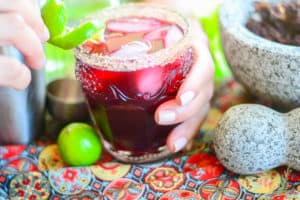 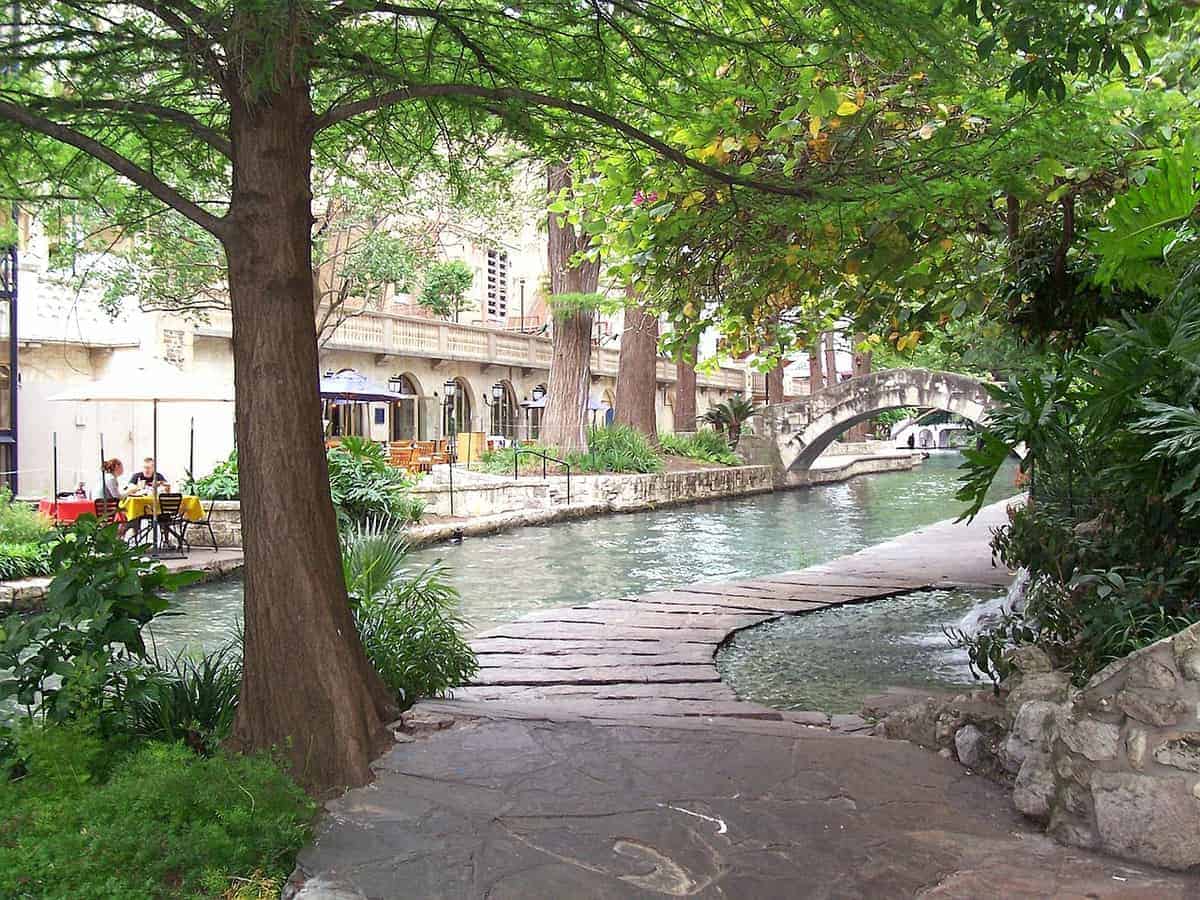 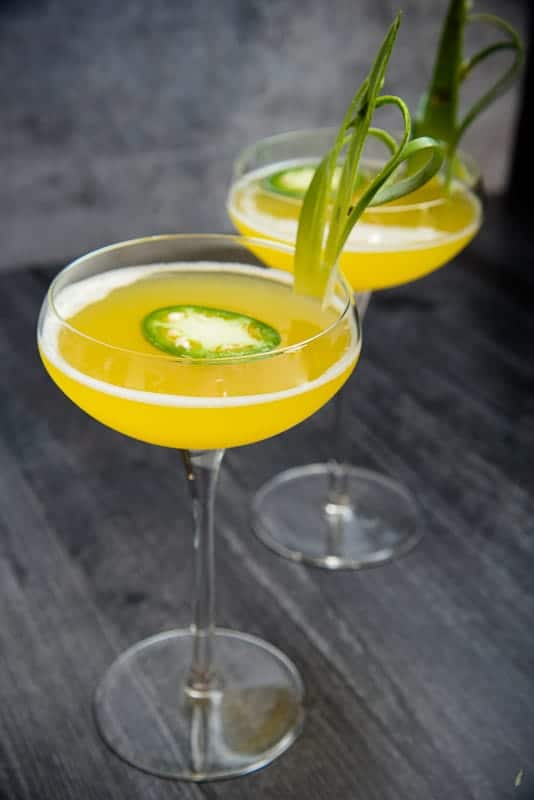 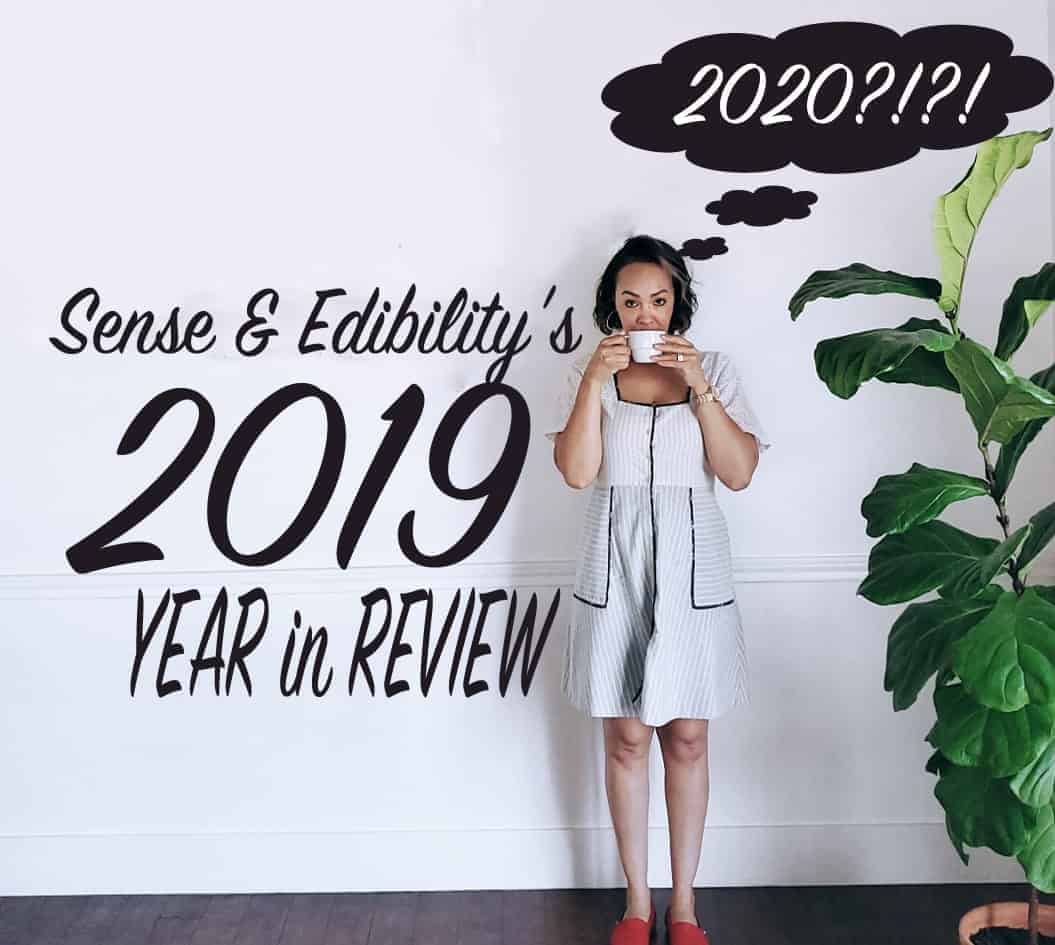 Yes! So glad you enjoyed it, Kris!