June 18, 2019 by Marta Rivera
Prep the tamarind juice up to one day ahead for an easy cocktail.
Get RecipePrint Recipe
453Shares 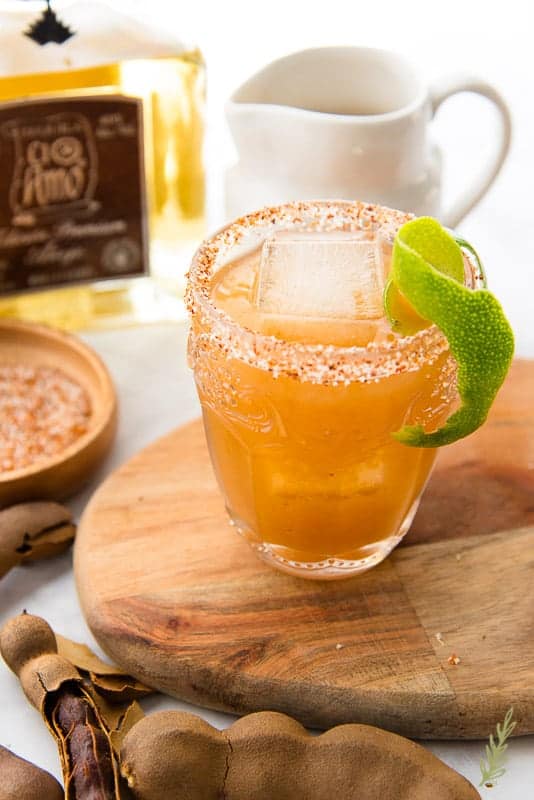 Truth be told, I almost forgot about Father’s Day this year. I mean, I planned something in advance- I was going to take the baby’s daddy out to dinner at a swanky restaurant. I failed miserably gift-wise, though. My bright, sunny disposition should be more than enough; but it’s always good to give something materialistic, right? Accepting my shortcomings, and since Hector’s favorite juice is tamarind, I decided to create this cocktail in his honor. 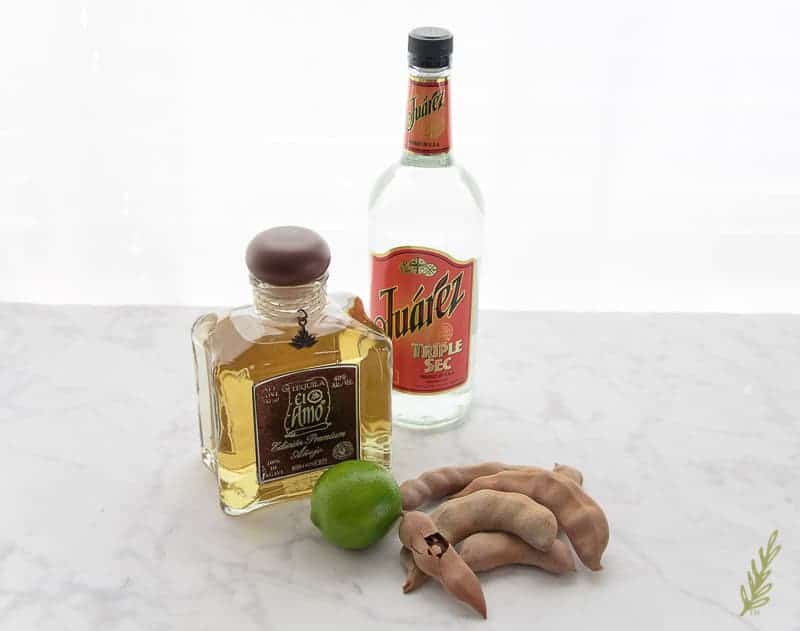 Now, while this recipe does make two generous tamarind margaritas, you can double it for a pitcher margarita for your parties.

Get to know your tamarind pods 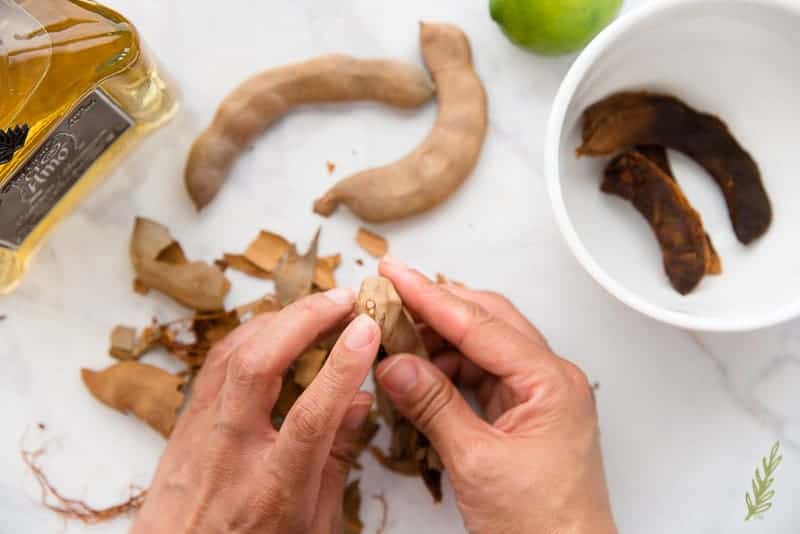 North Americans are probably the group of folks who are the least familiar with tamarind. Europeans come in second. Truth be told, most people here in the States have never eaten- let alone worked with- fresh tamarind. That’s why you’ve been blessed with me, Friend.

Tamarind is a fruit, though some people consider it a legume. It’s candy to me. Tamarind has a very sticky, date-like pulp which surrounds a hard seed. All this goodness is encased in a hard, brittle pod, which you need to remove to get to the good stuff. It can be found in sweet or sour varieties. Look for both kinds at Asian or Hispanic markets or online.

If you want a healthy candy, try the sweet variety. You’ll need the sour version for this cocktail, though.

Press the hard shells between your fingers to get to the good stuff. Once you’ve cracked them open, pull the hard shells away from the pulp. Now the key is to hold the stem end in your hand while you pull the rest of the shell away. 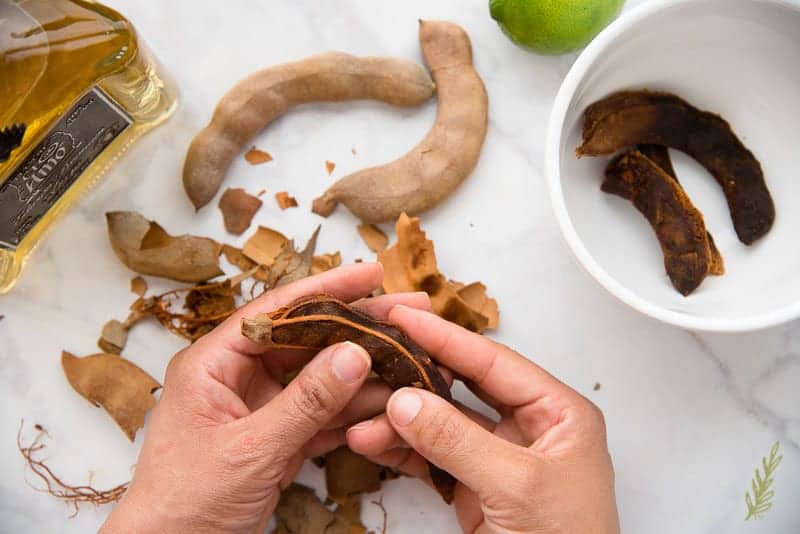 Tamarind has vine-like strings that grip the pulp. After you’ve removed the lighter brown husk, give the stem end a tug. Since the “vines” are attached to that stem, they should come away when you lift that nub off. Put the shelled fruit into a large mixing bowl for now. 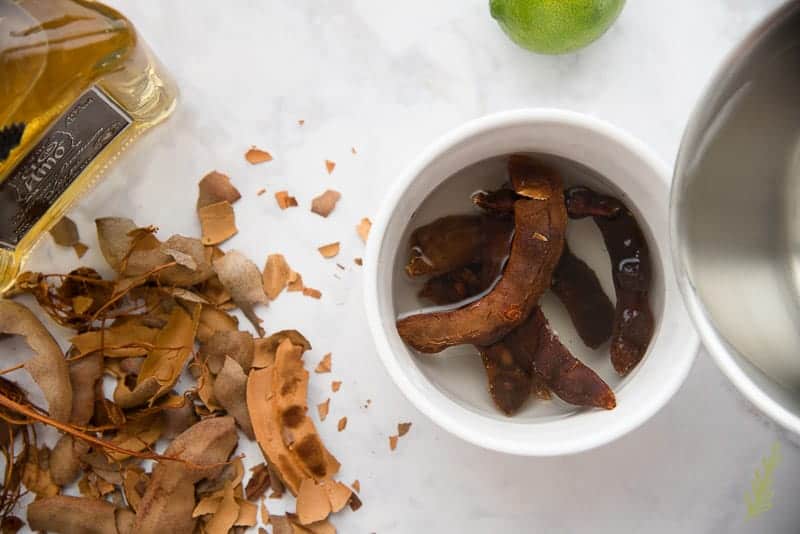 The tamarind pulp is sticky and clings to the fruit’s rock-hard seed like the dickens. Set a pot with two cups of water and a cup and a half of white sugar (simple syrup) to boil over high heat. After the water comes to a boil and the sugar has dissolved, pour the boiling water over the tamarind in the bowl. Allow the hot water to loosen up the pulp. I usually let the fruit soak until the water is cold to the touch.

Once the water is cold, pour the contents of the bowl into your blender. Blend the liquid for about a minute. This step separates the pulp from the seeds. It’s going to sound gnarly because those seeds are tough, little bastards; but don’t fret, they won’t break your blender. If they do, that’s because your blender is old and needs to be replaced anyway.

After you’ve blended the tamarind for a minute, strain the water through a fine mesh strainer, or through a piece of cheesecloth set inside a funnel. The goal is to strain off the seeds and the pulp that’s still clumpy. Let the liquid sit in the fridge for a while (about an hour) to chill completely. 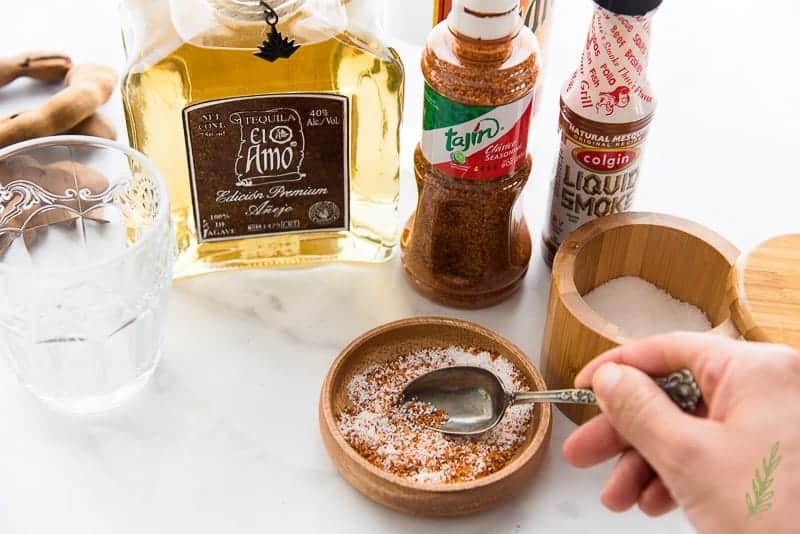 While your tamarind water is chilling, make the smokey spiced salt that you’re going to rim your glass with later.

Combine the Tajín, kosher (or sea) salt, and a couple drops of liquid smoke in a shallow bowl or dish. Use a spoon or your fingers to mash that liquid smoke into the Tajiín and salt.

Liquid smoke is exactly what it sounds like- a liquid that tastes like concentrated smoke. It plays off the smokey undertones of the añejo tequila that we’re using as the base of our margarita. 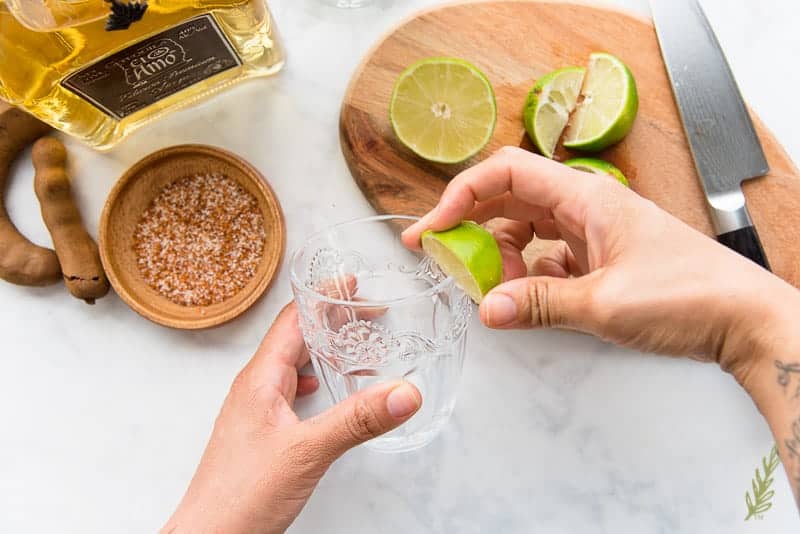 Use your chef’s knife to cut a large lime in half, then cut one of the halves into wedges. Rub a wedge (per glass) around the rim of your old-fashioned glass to moisten it. 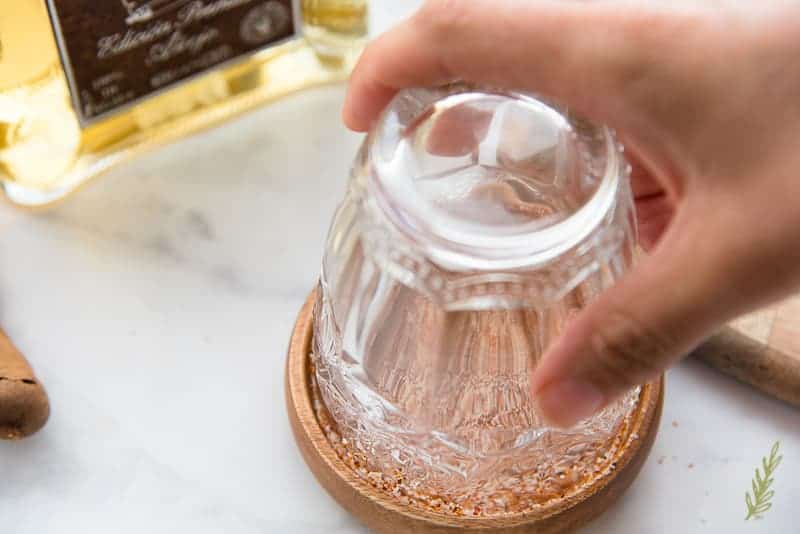 Now dip the wet rim into your smoked salt mixture. Set the glasses aside to dry while you shake things up a bit.

I prefer to use El Amo Añejo tequila in this recipe. Añejo- “aged” in English- is a tequila that has been aged for more than a year. Standard blanco tequila (the most common type of tequila used in margaritas) isn’t aged at all. The benefit of using an aged tequila in this recipe is the woodiness and body it lends to the cocktail.

A great substitute would be an extra añejo or even a mezcal, which is a smokier type of liquor. 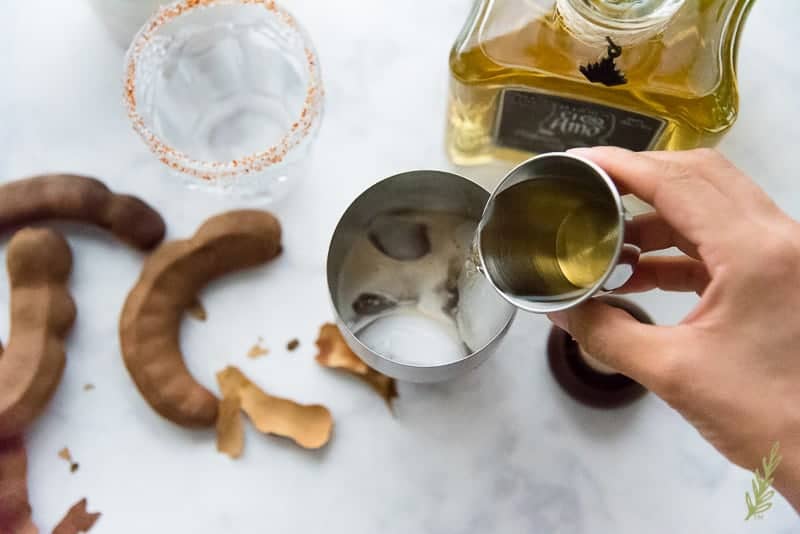 Pour one and a half jiggers of añejo and a half jigger of triple sec into an ice-filled cocktail shaker along with lime juice from that remaining lime half. Top it with a cup of the strained tamarind juice.

Cap the shaker and give it a vigorous shake until the shaker frosts over. 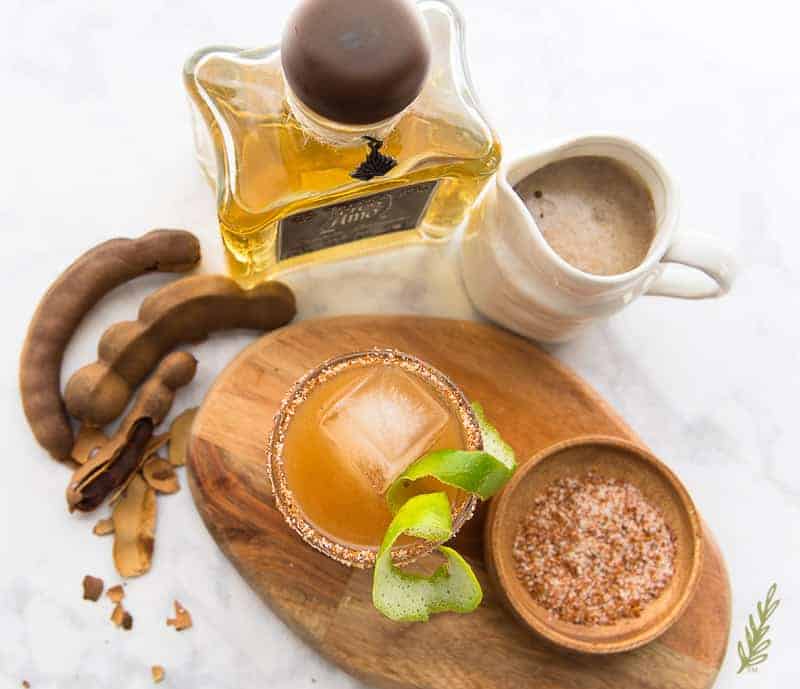 Plunk a couple of ice cubes into your rimmed glass and strain the shaken margarita into it. 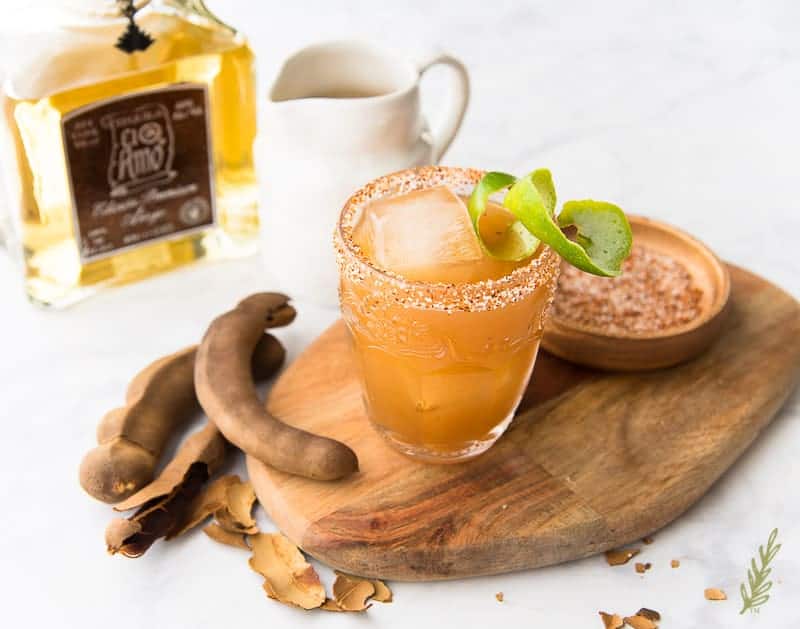 Sprinkle a bit more of that smokey salt over the margarita. 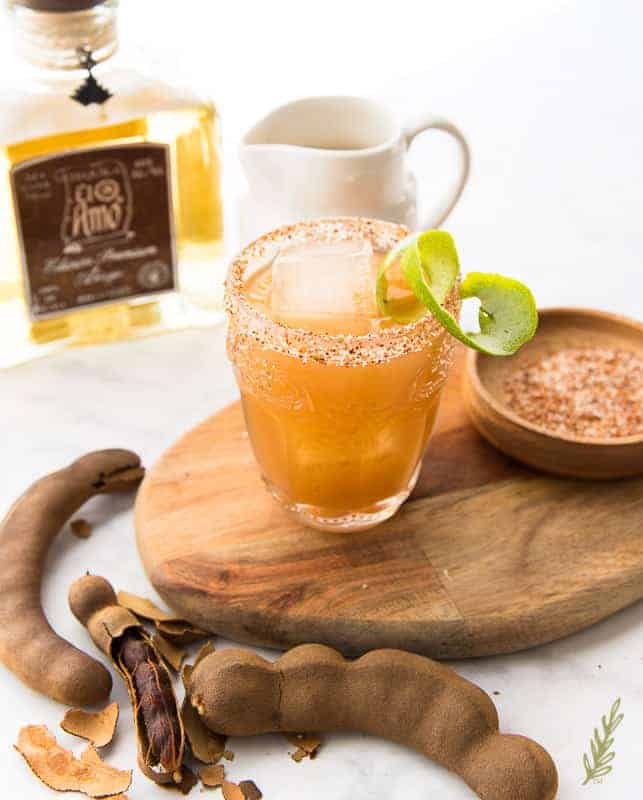 Serve and enjoy it immediately…

Quadruple the recipe for pitcher margaritas. The tamarind juice, served on its own over ice, becomes a kid-friendly libation.

If you missed Father’s Day, this is a great way to make up for it! Pin this recipe for future sipping.

*This post contains affiliate links. To find out what that means to you, please read my disclosure page** 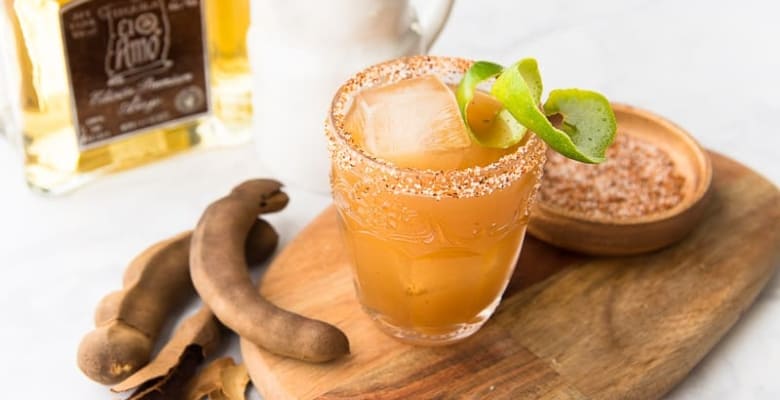 Feeling creative?
Try my other libations: 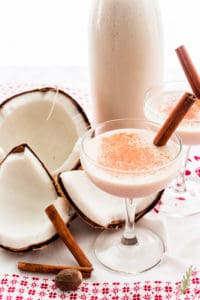 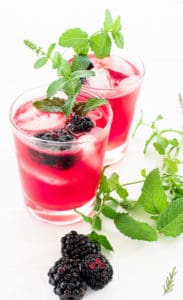 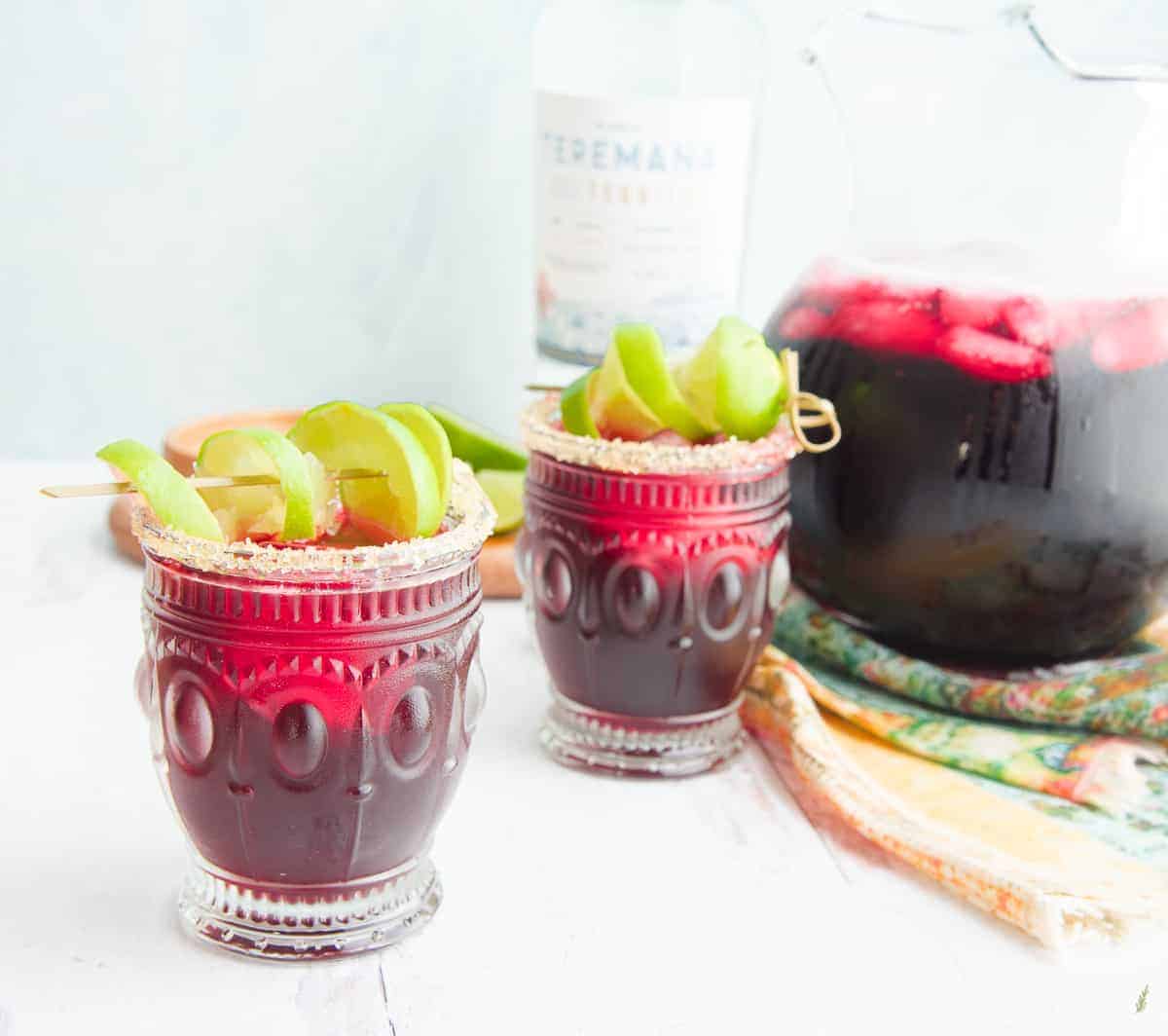 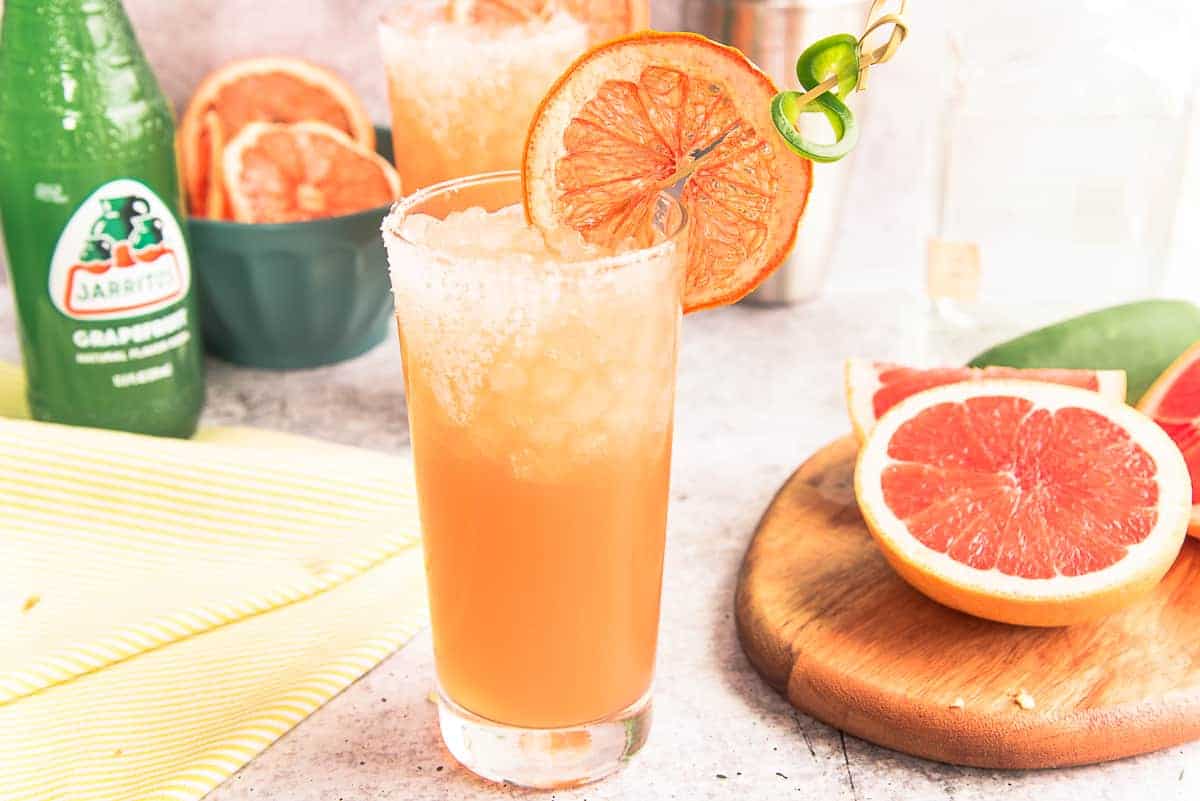 I have never cooked with tamarind but I love the flavor, so I am excited to try. What a fun take on a traditional margarita. This would be a show stopper at a party!

It sure will be! I can’t wait to make a batch for my friends!

Looks like a great summer cocktail but I don’t know where I can get tamarind in here.

I give suggestions on where to find it in the post.

I love using tamarind paste in cooking, but never would have thought about tamarind for a cocktail. This looks AMAZING, Marta!!

Thanks, Leigh! Tamarind paste is a great substitute for the whole pod if you’re pressed for time.

That looks like the perfect summer cocktail! Can’t wait to give it a try

You’re going to love it, Paula!

When I was in high school, I spent a summer studying abroad in Costa Rica. My host mom would make us tamarind juice, which was soooo good. I’m so curious now to make it into a cocktail!

If you love agua de tamarindo, you’ll love it in a cocktail!