May 3, 2019 by Marta Rivera
An easy and versatile dessert that's perfect for Cinco de Mayo.
Get Recipe
872Shares 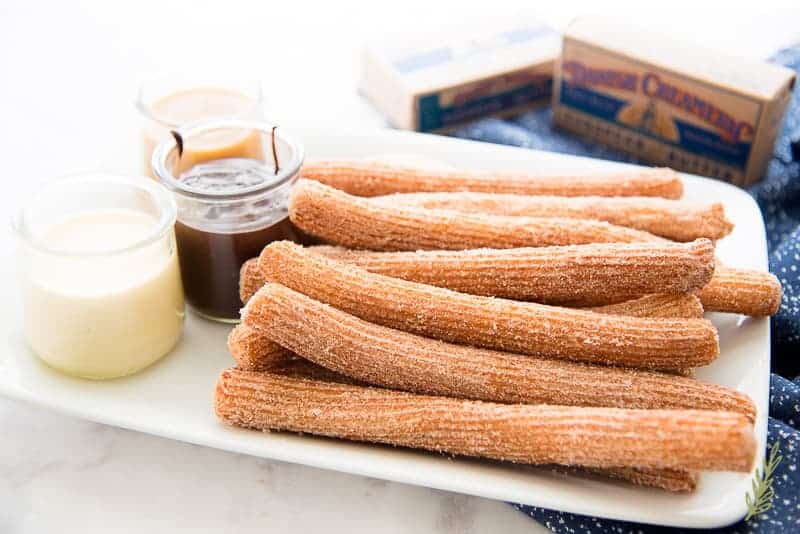 This post is sponsored by Danish Creamery, but all opinions are my own. Cinco de Mayo is a pretty festive time food-wise…at least for me. No, I’m not Mexican, but who doesn’t love Mexican food? And who says you have to be Mexican to appreciate the simplicity of churros? No one sane, that’s for sure.

Churros are the easiest dessert you’ll ever make, and with the three dessert dipping sauces I’m pairing them up with, you’ll have no lack of variety after dinner. 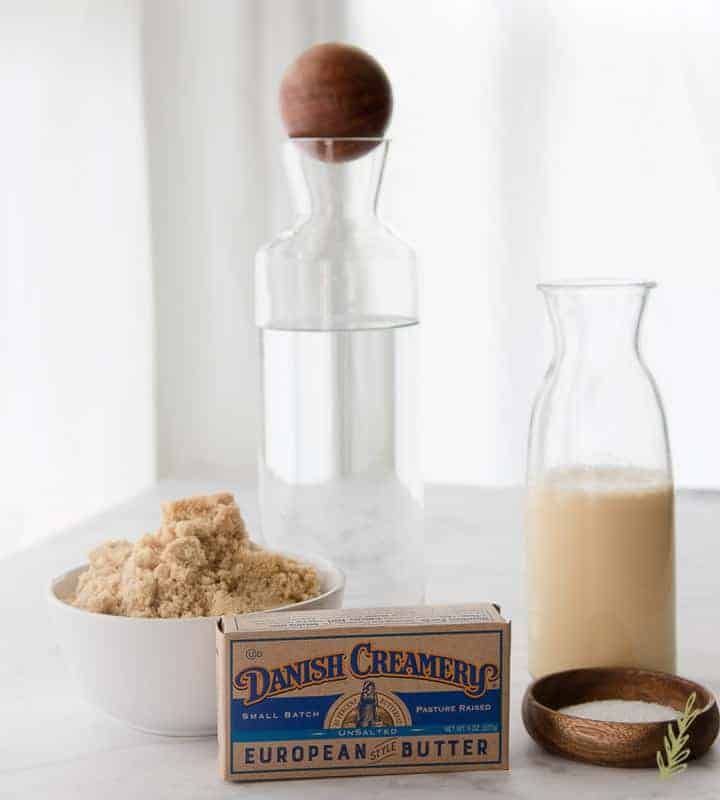 Water, all-purpose flour, salt, egg(s), and a high-quality butter. That’s it. Because the dough is so simple- with minimal ingredients- using the best quality ingredients is paramount. I’ve recently fallen head-over-heels for Danish Creamery butter. My local supermarket had it on sale and, having never tried it, I picked up a few boxes.

Now, we all know I’m a stickler for using the best products you can afford and Danish Creamery’s 85% butterfat spoke to my soul. EIGHTY-FIVE!! Because the butterfat is higher than other European brands, I knew that it would blend to a velvety finish in the baked goods I used it in. I wasn’t wrong, either. I’m hardly ever wrong when it comes to good food. But, I digress. 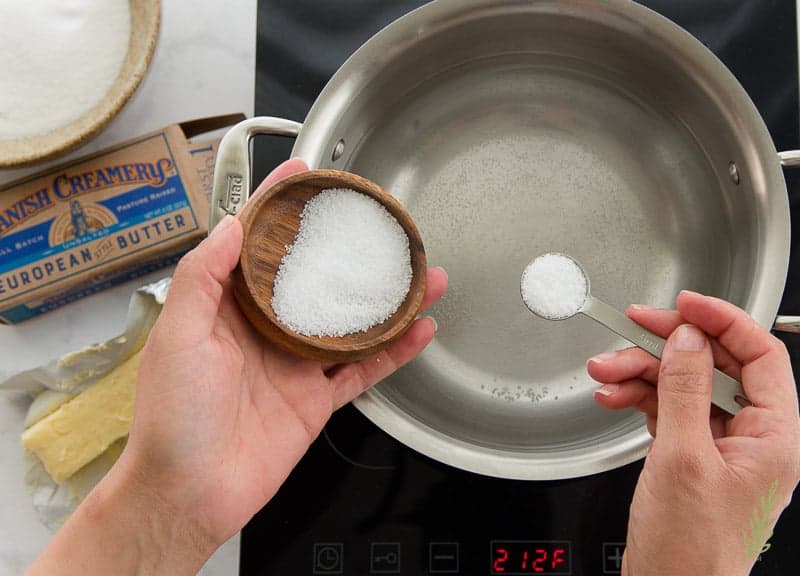 The key to making churros that have a crispy exterior and a pillowy soft interior is a homogenous liquid. While it’s tempting to throw everything together and attempt to whip the churros up quick, it will only lead to frustration when you attempt to fry your dough. The dough will break apart and the end result will be a soggy mess.

So, bring the water, sugar, and salt to a rapid boil over medium-high heat. 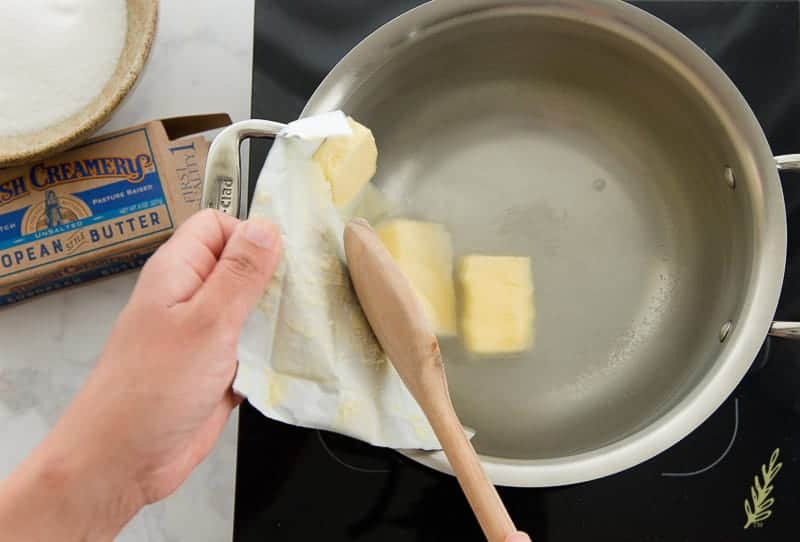 Once the water is boiling, add the butter to the pot and allow it to meld with the water. Again, the velvety, rich butter (thank the Lord for those amazing cows and their healthy diets) and that water don’t want to become one. But, they must become one. Must, I say. And they will, but you need to be patient and allow it to happen.

Just stir them together to encourage them to love on one another. This step will take about 5 minutes. 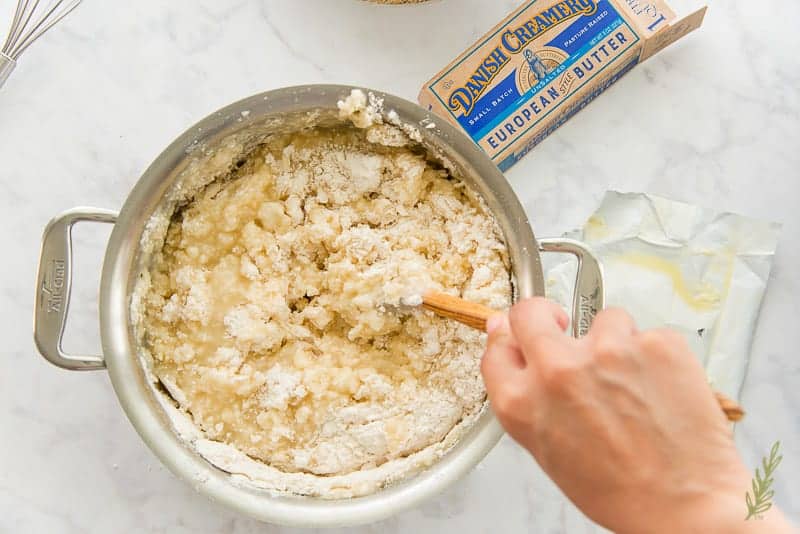 Dump all of the sifted flour into the pot at once, then begin stirring like a mad-person. Stir like the dickens!

But, just be prepared, the dough will stiffen to the point where you’ll need a hand mixer. Don’t be a hero by trying to keep stirring with that spoon. You’ll probably break it. And do be sure to use a wooden spoon! A metal spoon will  become too hot from the dough and could burn you.

Add the eggs, one at a time 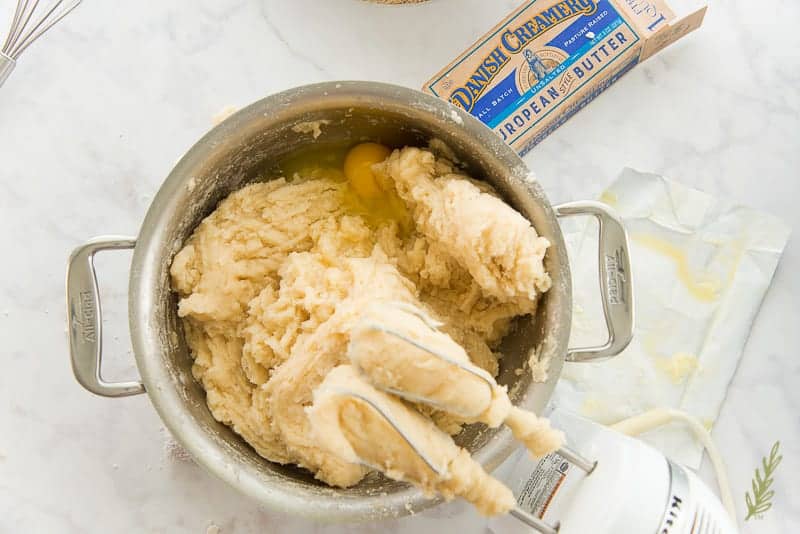 The dough for these churros is very much like the pâte à choux dough I used to make these Valentine’s Day Cream Puffs. The biggest difference is that there aren’t as many eggs in this dough as there were in the cream puff dough. In fact, this dough only has one egg. The amount of eggs you’ll need will vary depending on how humid the day is or how long you allow the dough to cool after adding the flour, but it should be no more than two eggs, tops.

Add the eggs- one at a time- making sure to blend them into the dough well before adding any more (again- only add more eggs if the dough feels crazy-stiff). The dough, when done, should be loose enough to pipe through a pastry bag, but thick enough to hold its shape when piped through a large star (1M) piping tip. Let the dough cool a bit while you prep the cinnamon-sugar and the frying oil.

Combine the cinnamon-sugar and heat the oil 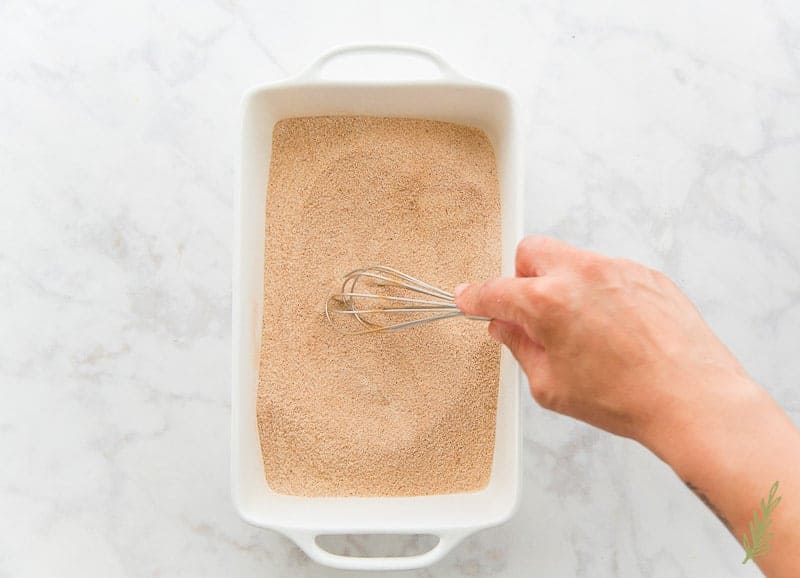 In a shallow dish (I just used my casserole dish because it fits my fried churros) combine the granulated sugar, cinnamon, and a pinch of ground nutmeg. The nutmeg is probably not authentic, but hey! I’m not an authentic Mexican, and you still love me, right? Set the cinnamon-sugar to the side so you can coat the churros after they’ve come from their oil bath.

Preheat the vegetable oil to 350°F. I use a handy-dandy deep-fry thermometer to make sure my oil temperature stays on target. 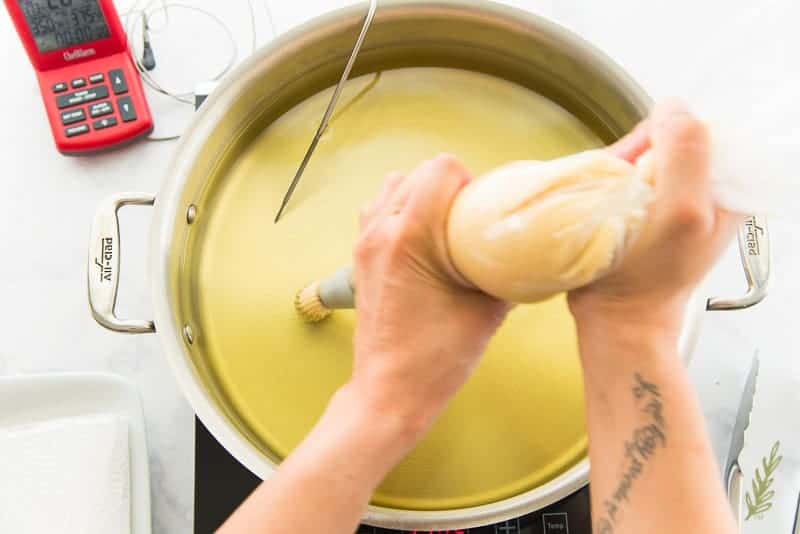 When the oil is at the proper temperature, pipe the dough into the pan. You do want to try to keep the dough straight as you pipe the churros into the pot, but let’s be real here- the oil is hot and the dough wants to do its own thing. Do your best to pipe the dough into the oil in strips that are roughly 6-8″ long. When you pipe them into the oil, wait a couple of seconds before piping the next one. This will give the first churro a chance to develop a skin in the oil that will keep the churros from sticking to one another.

Use a pair of kitchen shears to cut the churros into the pot. That’s the easiest way to cut the dough off, in  my opinion. You can also use a knife to cut it off.

Drain, Coat, and Serve the Churros

Fry the churros for 6-7 minutes, or until their exteriors are golden brown and crispy. Now, if you’ve made a mistake by adding too many eggs, you’ll probably have slightly soft exteriors. They’ll firm up as they sit, but they may taste a bit chewy.

Transfer the churros from the oil to a platter lined with paper towels and allow them to drain for- like- 30 seconds. Put the churros, two at a time, into the cinnamon-sugar and coat the churros completely. 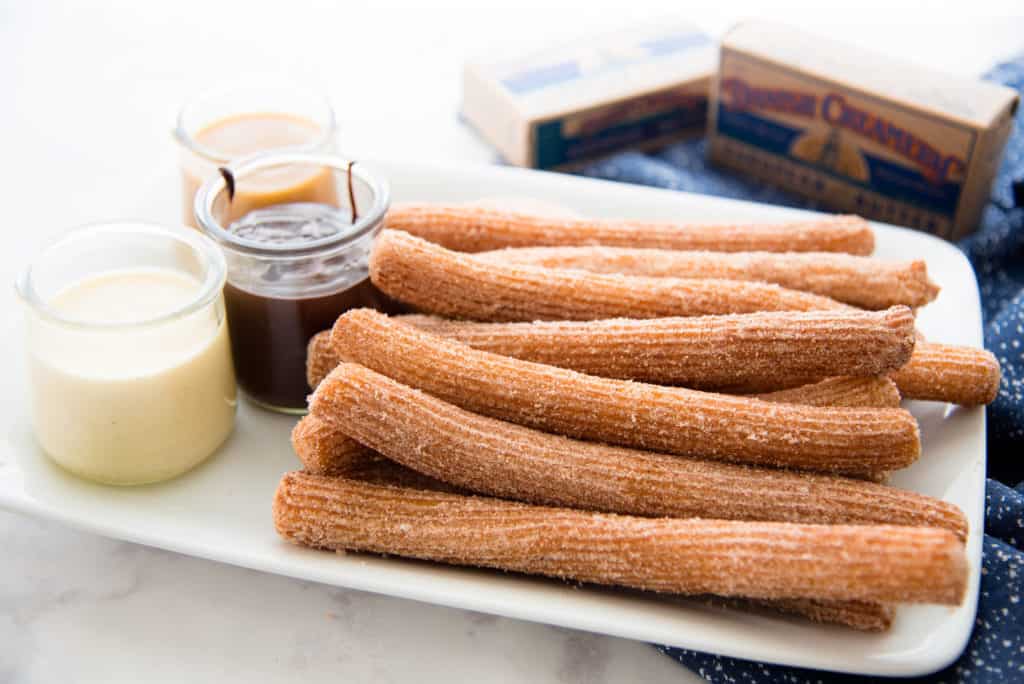 Now, I need to be honest and tell you that- on their own- the churros are amazing. BUT!!

I said BUT!!! I’m serving these with three amazing dessert sauces: crème anglaise (AKA warm vanilla bean sauce), cajeta (goat’s milk caramel), and dark chocolate ganache. My friend, you need to get on this train. 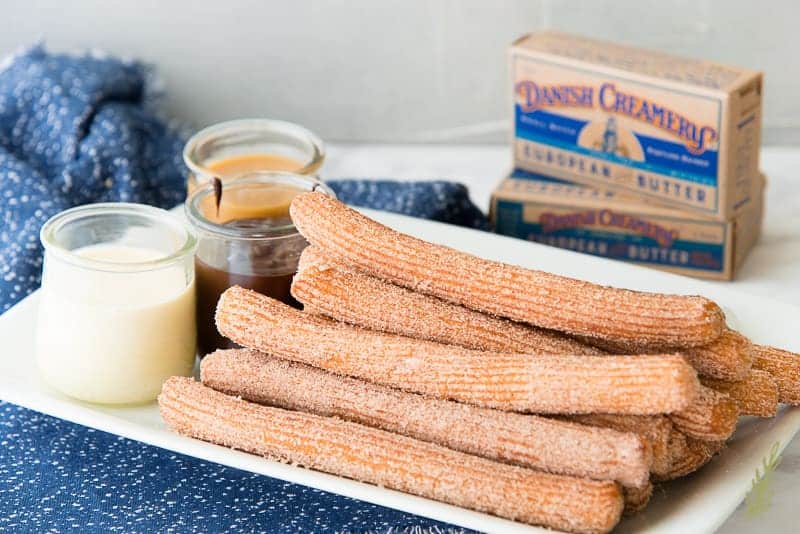 Now tell me you can’t picture your friends and family’s faces when you set these down on the counter for them! 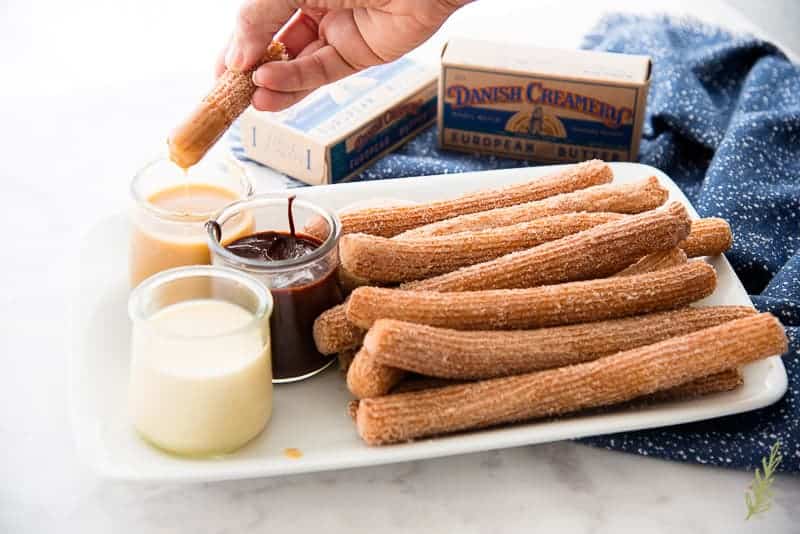 Go ahead and pin this recipe. Then, get started on your Cinco de Mayo meal plan with these amazing churros. And don’t forget to pick up a few boxes of Danish Creamery while you’re at it and let me know what you think. 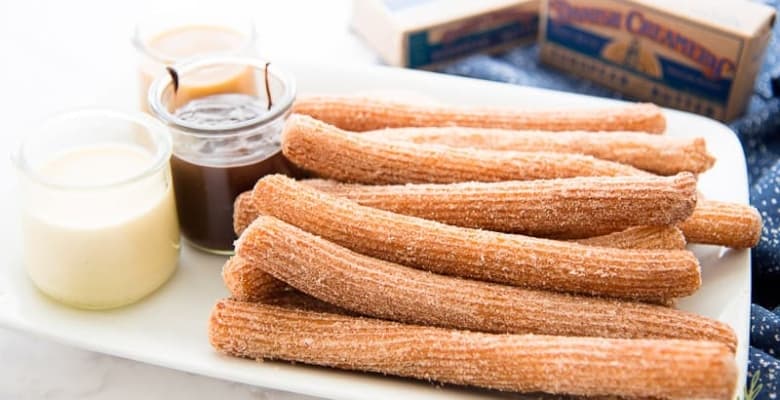 These dessert sauces are all you need
to complete this dish: 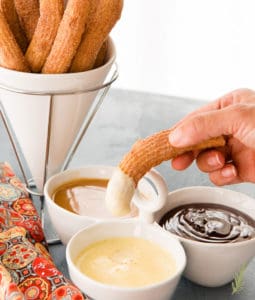 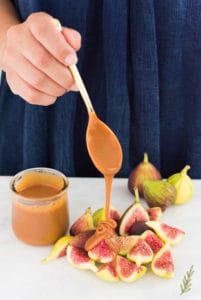 Or check out this Churro in cake form from my friend Aline! 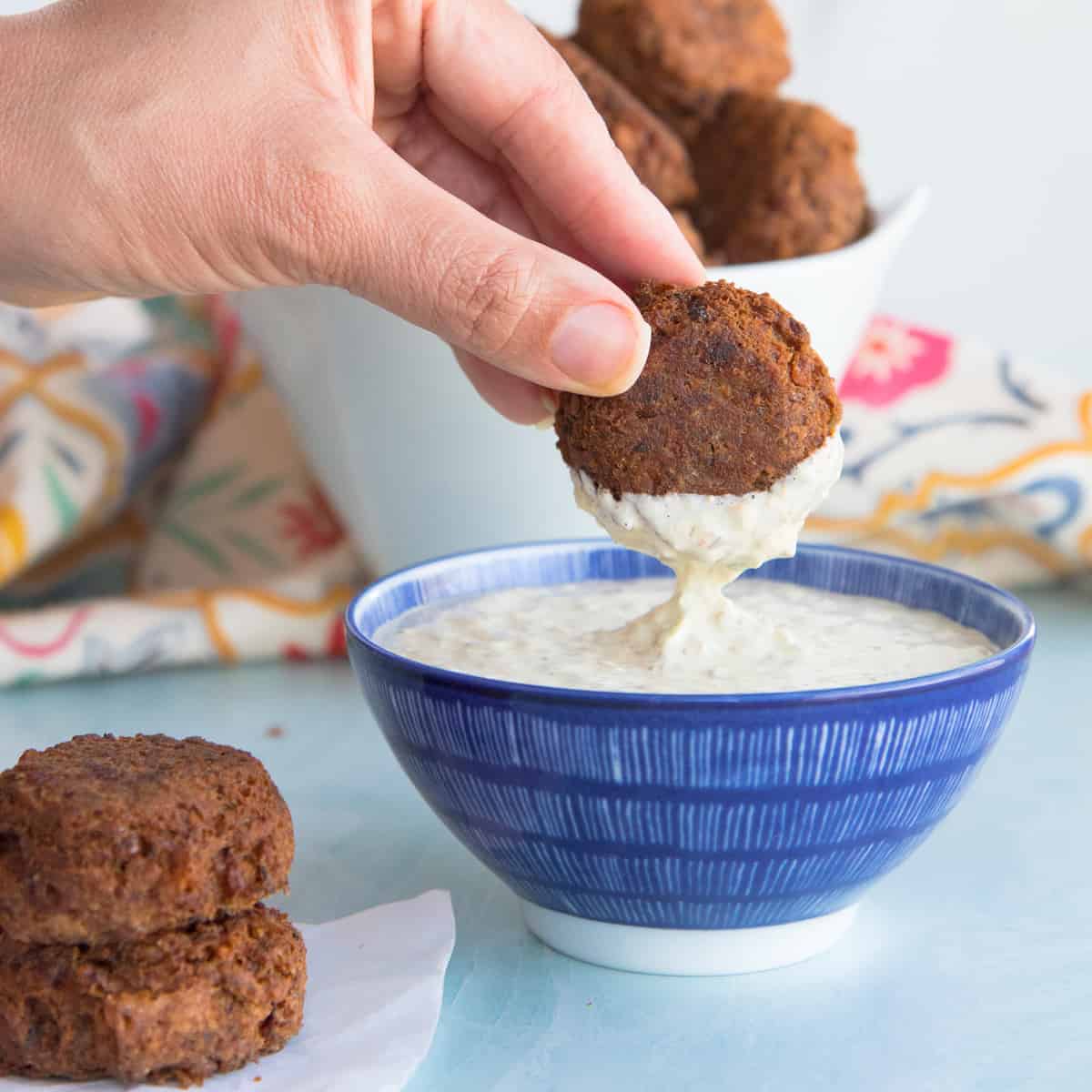 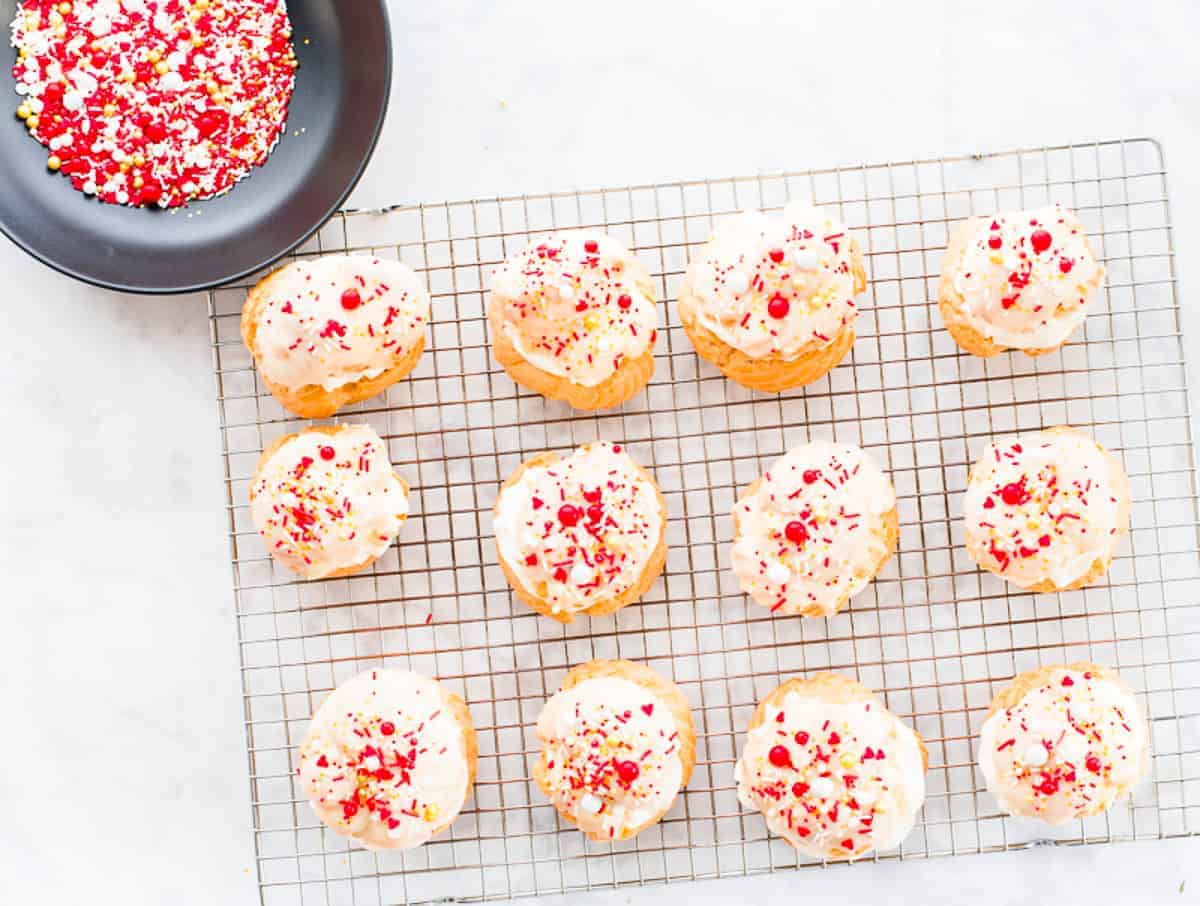 Cream Puffs: Better than the Bakery

can I use regular unsalted butter. there isnt any special butter you require in my supermarket?

Sure, Emily. You can use whatever unsalted butter your store carries.

Oh my! This looks so good! I love churros!

My churros never turn out looking this good! Love the sauces also!

I’m sure with the tips, that’s going to change!

Making churros right at home has never been easier! I love mine hot and dipped in lots of chocolate.

My favorite is in creme Anglaise, but cajeta is a close second.

I love Churros!! I have never thought about making them at home. With all of this extra time I have at home I might have to whip some of these up! 🙂

I love making them at home. They’re really easy and I can have them anytime I want.