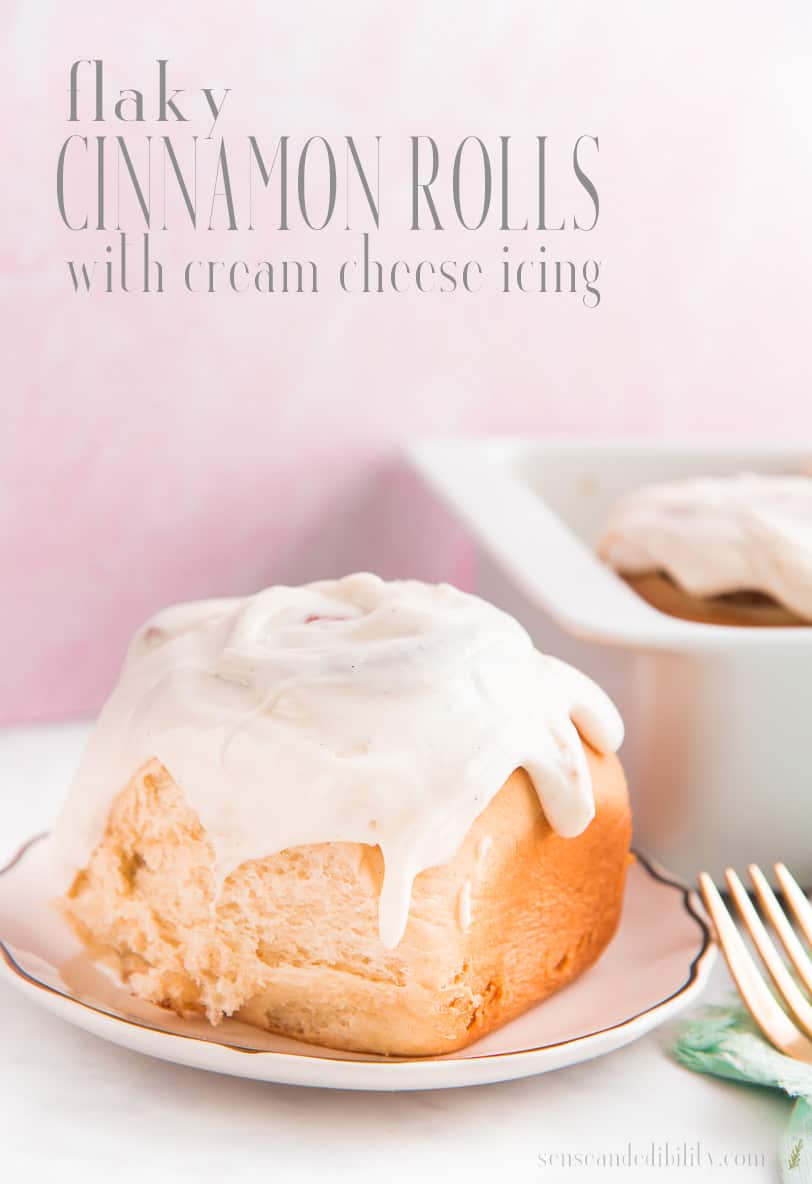 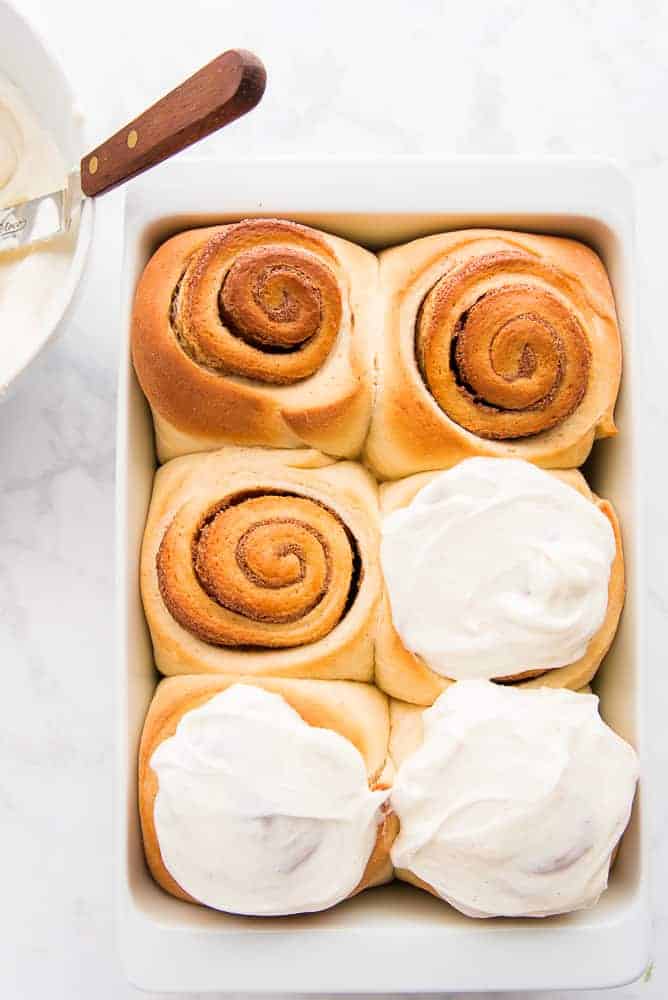 My flaky Cinnamon Rolls with Cream Cheese Icing deliver on their promise of flaky layers. These rolls have that familiar flavor (and aroma) we all know and love even though they are prepared with a small twist. Cream Cheese Icing sweetens the deal, but is totally optional. You can make these the night before you plan to serve them, too, which makes them lazy day-friendly.

Kids, Dads, Baby’s Daddies, Baby’s Daddies Daddies, listen up! I speak on behalf of all the moms out here. We don’t want your bootleg greeting cards (we don’t care if you bought or made them, we don’t want ’em this year). You can also keep the stale ice cream cakes. What we want for Mother’s Day this year is to receive these flaky Cinnamon Rolls with Cream Cheese Icing… IN BED. Without having to help you figure it out.

Your job is to read on to figure out, step by step, how to make these.

What You Need to Make These Cinnamon Rolls 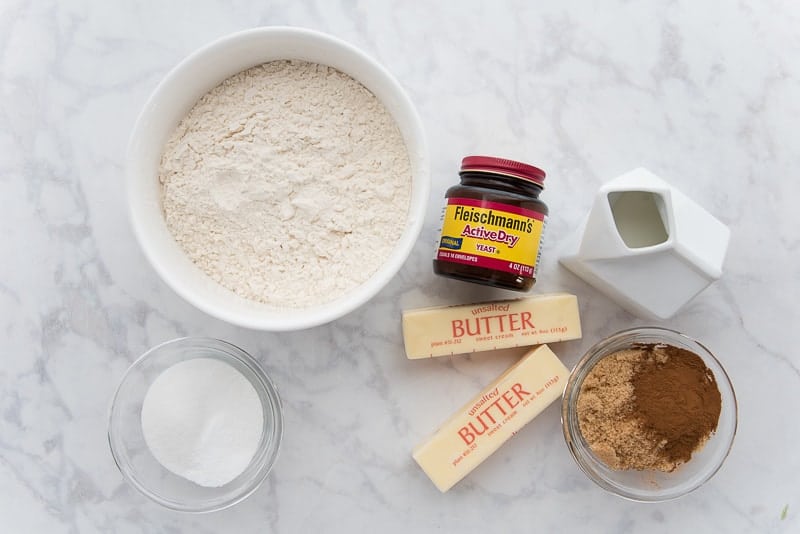 Since moms always seem to be the ones prepping for everything, this year it’s her turn to chill. Because I’m such a gem of a friend, I’m going to break down everything you need to do to honor her with a gift she really wants. Breakfast in bed.

You can do this! You are going to do this and it’s going to be epic. (I’m your hype-woman)

Bloom the Yeast in Warm Milk 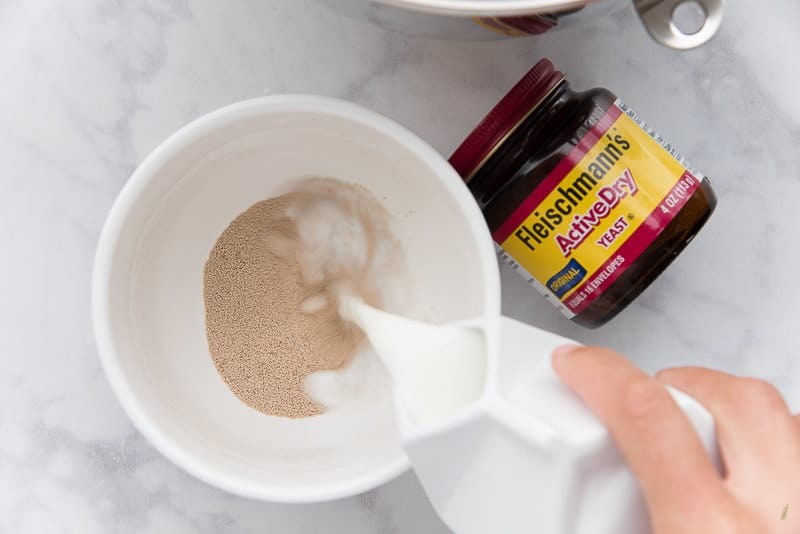 First of all, you need to activate the yeast that’s going to help the cinnamon roll dough rise. I use Fleischmann’s active dry yeast. In a small mixing bowl combine the yeast, a pinch of sugar, and the warm milk. The yeast feeds on the sugar and boosts its rising power a bit more than it would without.  While you leave these three to do their thing, move on to making the rest of the dough. 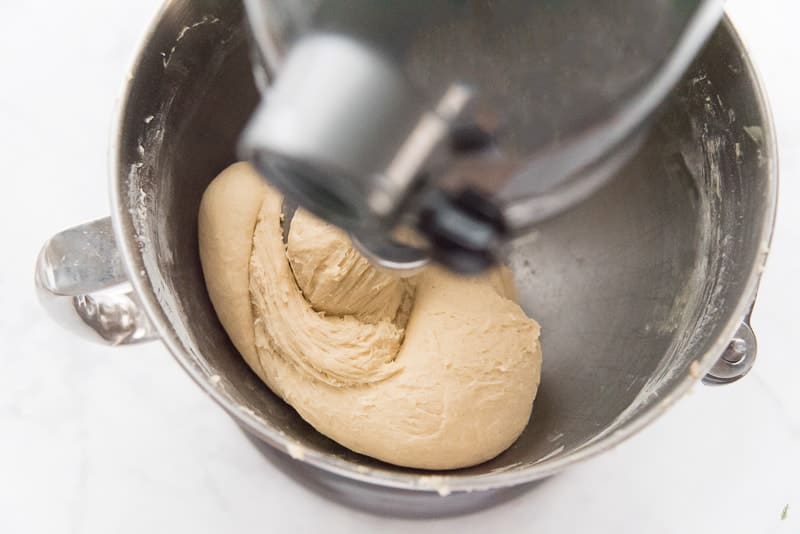 In your stand mixer and using the paddle attachment, cream together the granulated sugar, salt, and room temperature unsalted butter. With the mixer on medium-high speed, beat these three together until they are light yellow and fluffy, which takes about 4 minutes. Scrape down the bowl and paddle midway during the mixing, once will do.

Once the mixture appears light in color, add the eggs, one at a time to the bowl- scraping down the bowl and paddle after each addition. After the eggs have been added, increase the speed and beat the butter-egg mixture for another 3 minutes. The mixture may look slightly curdled at this point. That’s okay.

Add 1 cup of the flour and the warm milk-yeast mixture to the bowl, mix until a thick paste forms, then add the remaining flour. Once the dough becomes too stiff to mix with the paddle, switch to the dough hook attachment. Knead the dough on second speed for 5-6 minutes, or until the dough climbs up the hook, is slightly elastic, and tacky to the touch. The dough should not be sticky, if it is, knead in a bit more flour.

Give the Dough a Rise

After you mix the dough and it feels right, remove it from the bowl. Lightly grease the mixing bowl before returning the dough to the bowl. Turn the dough over so the oiled part is on top. Cover the bowl with plastic wrap or a clean kitchen towel and place it in the warmest area of your kitchen. Since my microwave is a controlled environment- temperature-wise- I put my bowl in there.

The dough will need an hour to double in bulk. 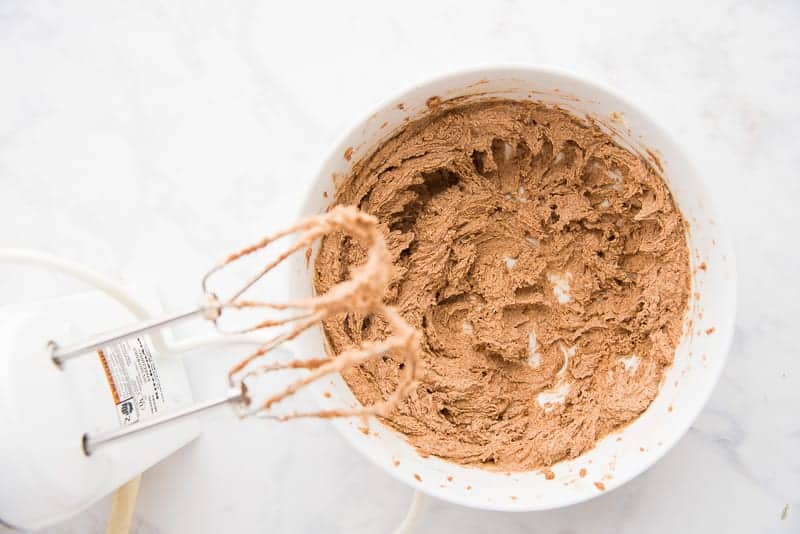 While you’re waiting for the dough to rise, mix the butter-cinnamon schmear. This filling is what turns your rolls into cinnamon rolls.

In a mixing bowl, use an electric hand mixer to whip together the remaining stick of butter, light brown sugar, and cinnamon. Beat on medium-high for 3-4 minutes, or until the mixture goes from dark to very light brown in appearance. Most, if not all, of the sugar crystals will be completely dissolved. As always, scrape down the bowl and beaters a couple of times while mixing.

Fill and Roll the Cinnamon Rolls 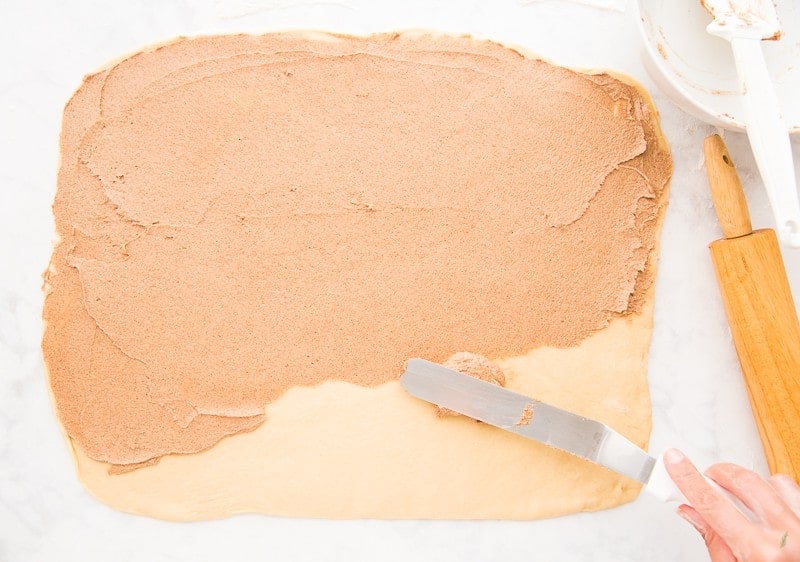 After the dough has finished rising, punch it down to expel the gases that have built up. Allow the dough to rest on the counter for 15 minutes while you gather what you need to roll it out- just flip the bowl upside down over the dough to keep it from drying out.

Lightly flour your work surface and use a rolling pin to roll the dough into a rectangle that measures approximately 17″ x 14″. It should be no thicker than 1/8 of an inch.

Use an off-set spatula to spread the cinnamon schmear over the surface of the dough. Leave a 1″ margin on one long (17″) end. This is needed for sealing the dough after we’ve rolled it.

Fold over a 1/4″ of dough on the schmear-covered long end. Tightly roll the dough to the un-schmeared end and pinch the seam against the roll to seal it. Position the dough so the pinched seam is on the bottom.

Cut to Suit Your Preference 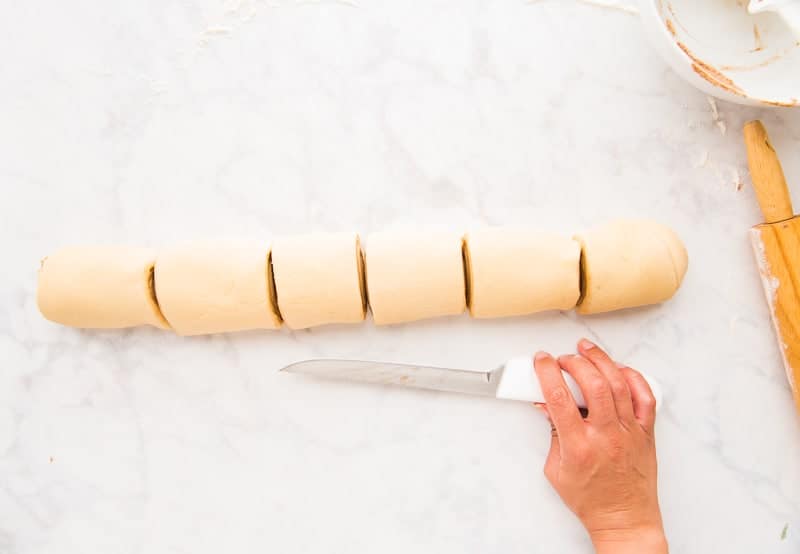 Before you slice your rolls, lightly grease a 9″x13″ casserole dish with non-stick baking spray.

Use a very sharp knife to cut anywhere from 6 to 12 cinnamon rolls from your long log. Now, I, personally, prefer a big, obnoxious cinnamon roll for breakfast. You may want one that’s a little more demure. If you opt to cut a dozen out, you’ll need to divide the rolls between two baking dishes or a half sheet pan.

Arrange the rolls in the pan. Cover with a piece of plastic wrap or a clean kitchen towel and put the pan in a warm area to rise for 30 minutes.

The rolls will rise slightly, but won’t double in size. Pop the pan into an oven that’s been preheated to 350°F after the rolls risen a second time. Bake them for 25-30 minutes or until they’re golden brown and risen. Also, keep in mind the larger the rolls, the longer you may have to bake them to cook them throughout. It may take 35 minutes. If you find they’re getting too dark after 25 minutes of baking, lightly cover them with foil and finish baking. 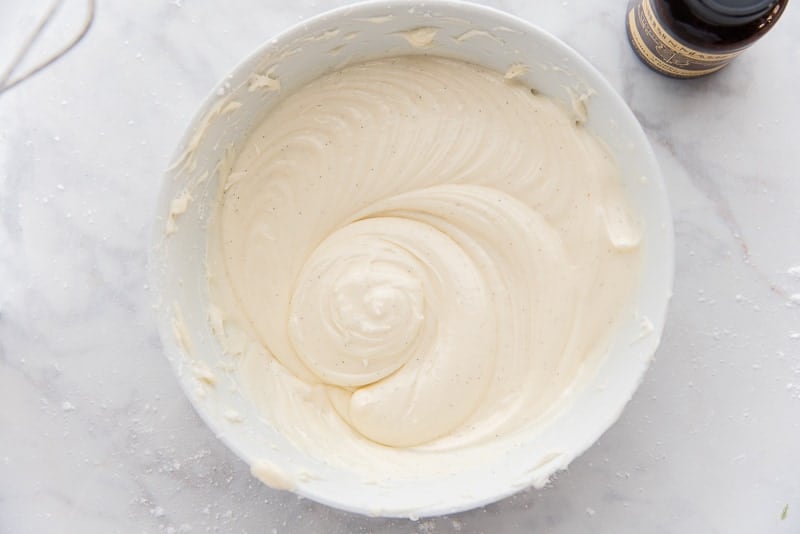 Prepare the cream cheese icing while the cinnamon rolls are filling up your home with the smell of love.

In a mixing bowl, blend together the soft cream cheese, powdered sugar, lemon juice, and vanilla extract. Once the sugar is incorporated into the mix, stop the mixer and scrape down the bowl and beaters. Increase the speed to high and whip the icing for 2-3 minutes. Set the icing bowl aside while you grab the cinnamon rolls from the oven. 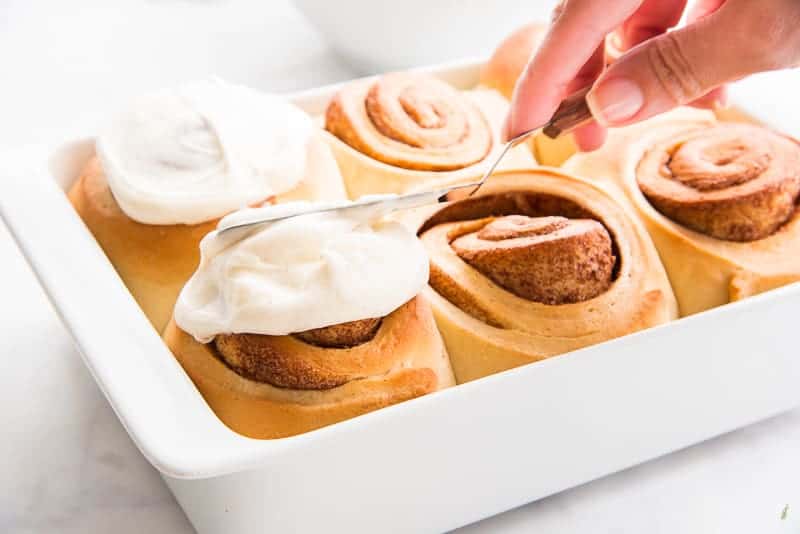 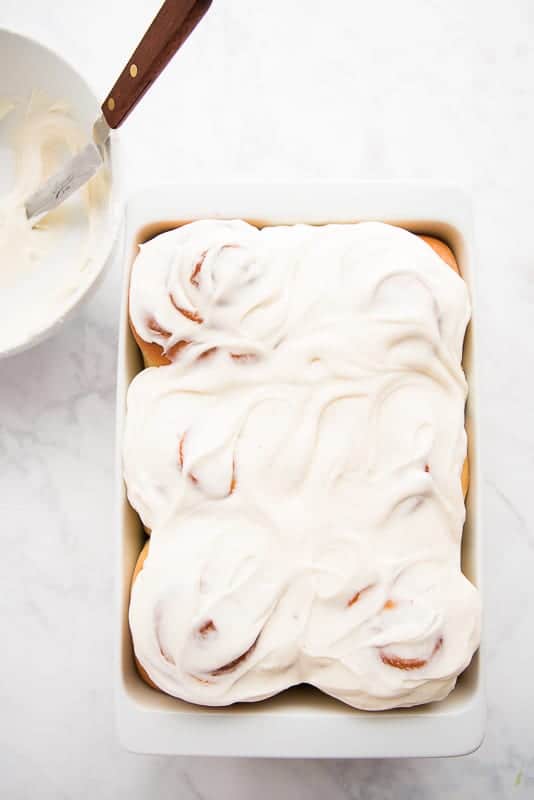 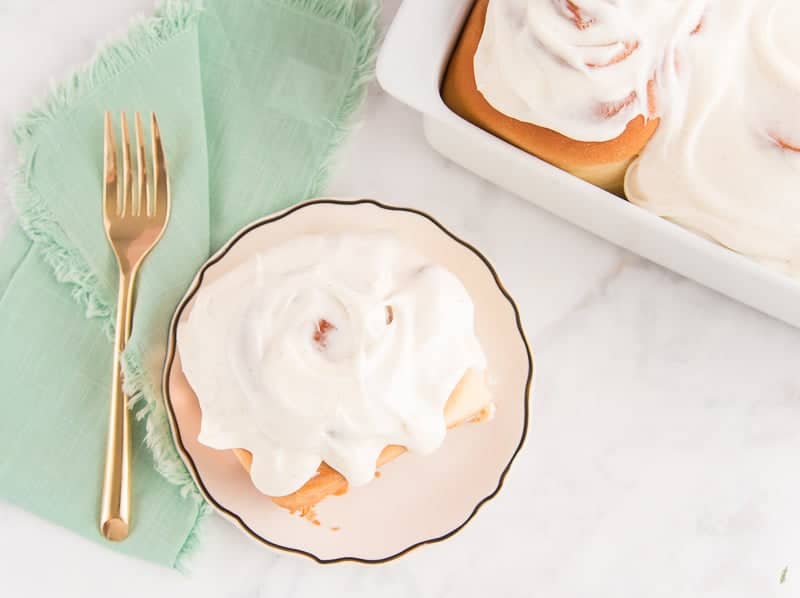 My favorite way to BE SERVED these cinnamon rolls is with a side of crisp bacon and fresh fruit, Héctor. HÉCTOR!! Somebody, go get him!

The rolls are best enjoyed within 48 hours of baking, but a quick zap in the microwave will restore them to their “freshly baked” glory.

Tips for Preparing Your Cinnamon Rolls Ahead 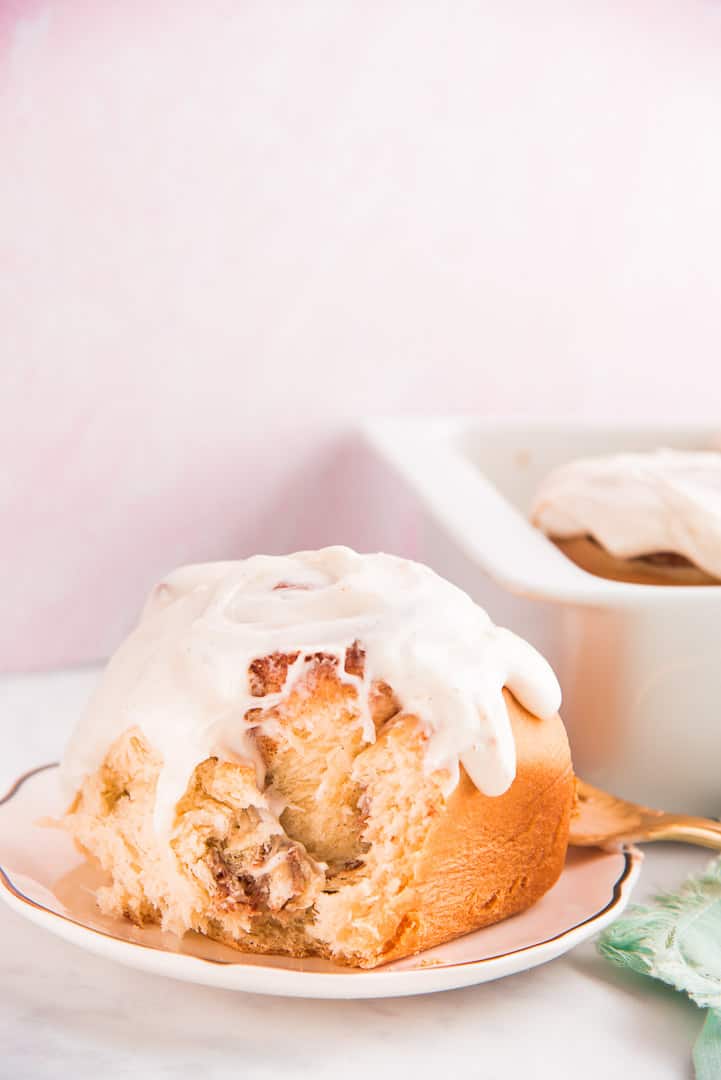 If you’re the type who doesn’t do early morning prepping, just make the rolls the evening before and bake in the morning.

Instead of allowing them to rise a second time, arrange the rolls in the baking dish, then cover it tightly with plastic wrap. Place the pan in the fridge overnight. In the morning, put the unwrapped pan in your cold oven. Allow it to hang out in there for ten minutes before turning the oven on to 350°F. Once the oven reaches temperature, set your timer to 20 minutes. After 20 minutes, check on the rolls. If they’re brown, pull them; if not, allow them to bake for an additional 5-10 minutes.

Make these for the mom in your life. She wants these more than she wants to go wait in a virus-infected restaurant for some mediocre brunch. Trust me, I’m a professional.

Pin the recipe so you don’t lose it and share with the others who need to know this important info. 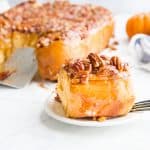 Print it Pin it Rate this recipe
5 from 24 votes

Nut-Free Option:    Omit the pecans from the caramel glaze.  Make Ahead Instructions:

Freezer Storage (only recommend after baking): 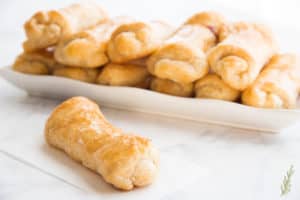 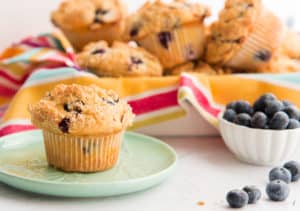 These are everything! Thank you for showing me just how easy homemade cinnamon rolls are, Marta.

Oh girl.. These cinnamon rolls make me want to do a dance.. They taste amazing!

I’m so happy to hear your dancing, girl!

I’m drooling just thinking about eating these cinnamon rolls! Now, how do I convince someone to make these for me? I guess I’ll just have to do it myself.

I prepped these last night to make this morning and I’m so happy I did! The house smells amazing and I can forget about the fact my toddler is a crabby mess. I followed the advice given to let it sit in the oven for 10 minutes and they baked to perfection. Just this side of done and lightly browned but not crunchy! My husband appreciated pairing it with bacon so he could dip it in the cream cheese icing.

Your husband is a wise man with that bacon dip idea! I’m so glad you all enjoyed it, Bridget!

These look amazing Marta!! Cinnamon rolls are on my list to learn how to do!!

Well, I hope this makes them even more doable for you!

Is it me or can anyone else smell these through the screen?! This recipe is a HIT! As always, thanks Marta!!

LOL! I can totally smell them through the screen!

These look amazing!! Definitely making them!

Awesome! Thanks for commenting!

I can’t wait to try my hand at these cinnamon rolls! Your step-by-step instructions are SUPER helpful!

I’ve never seen such perfect looking cinnamon rolls until I’ve seen these! I’d have this every day on my breakfast table if I could!

Me too! That’s why I’m glad they freeze so well!

I have to have cream cheese frosting on my cinnamon rolls – it just doesn’t seem right without! I have tried to make them once, and they were ok, but not as gorgeous looking as yours, so I must try your recipe – you would never steer us wrong!

I definitely would not steer you wrong, Jacqui! I do hope you enjoy them as much as we do!