April 27, 2017 by Marta Rivera
Customize your bowls with your favorite taco bar condiments! Sub out the pork for brisket or chicken.
Get Recipe
348Shares 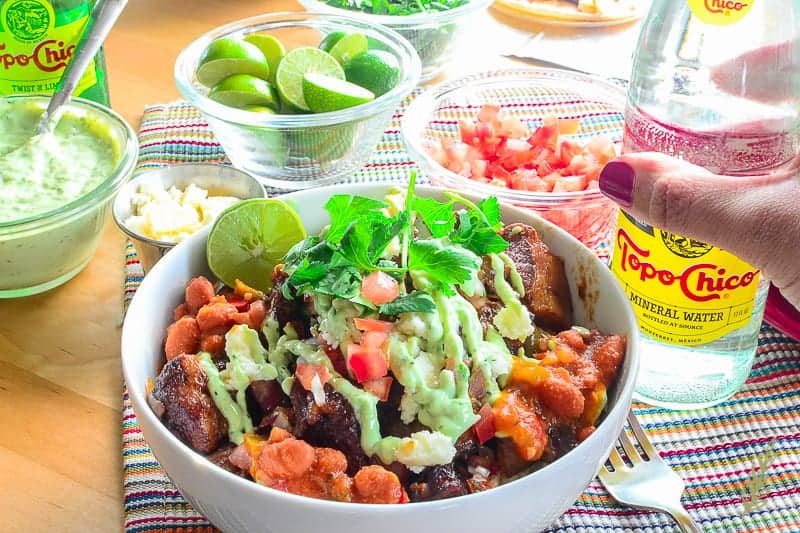 What if we made a big ol’ bowlful of pork and beer?!?! Just got the attention of every male walking the earth with that one. Viral posts, here I come! Nah, we’re not using a whole case of beer on this one. Just a whole bottle. These drunken carnitas bowls are innocent enough to serve to your munchkins, but flavorful enough to get your Cinco de Mayo party off to a great start.

I decided to make this recipe a part of a series of Cinco de Mayo Recipes.

I’m not that bad. I’m social when I want to be, and I can even fake when I have to be; I just don’t like being caught off guard. Most times, I need to practice what I’m going to say to people at least a week beforehand. Yes, I do that by looking in the mirror and playing both speaking parts. No, I don’t appreciate your judgement.

Hence the reason I don’t celebrate Cinco de Mayo outside of my house. I get skeeved at the thought of going to a bootleg Mexican restaurant (thankfully, those are few and far between here in Tejas) and doing mortal combat with a bunch of other military families trying to get their fill on $1 margaritas. Never knowning Cinco de Mayo outside of a military installation/city; I don’t know what calm CdM is. Which is, therefore, the reason I just can’t deal, y’all.

The last time we went out for CdM was in Fort Belvoir, VA- just outside of Washington, D.C. We went to a Mexican restaurant right outside the gate and waited an hour for cold fajitas and $2 Cuervo-laced margaritas. A mariachi singing to me made the nasty food and liquor go down a little smoother. Do you want to traumatize your children? Taking them to CdM at a restaurant is the way you do it. I may have threatened someone with, “Bodily harm if they bumped my chair trying to do the Mexican hat dance one mo’ time.” May have. Can’t quite remember. You know, Cuervo and all.

No, that was the last year we did the “CdM-outside-the-safety-of-our-compound,” thing. Now, we stay at home and recreate the meals we’ve grown to love…and even some I thought up on a whim. This recipe is a combo of the two. 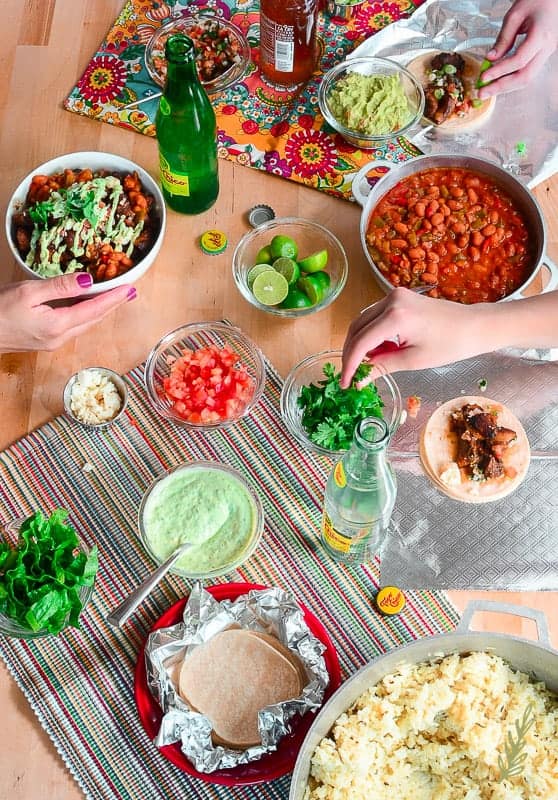 The time we spent stationed in El Paso was precious to our entire family. We made life-long friends and had so many amazing (and sad) experiences there. El Paso is a town that is a world apart from the rest of America; an American city that lies within walking distance of Mexico. We’d drive to our favorite places with a clear view of Ciudad Juárez outside our car’s windows. I would go back to El Paso in a heartbeat. Not  just for the food, but also to be reunited with my dearest friends who gave us all a love for Mexican- real Mexican- foods.

Tacos al pastor was a dish my husband fawned over. Usually flavored with pineapple (or piña in Spanish) and roasted on a spit, tacos al pastor (or Shepherd’s-style tacos) were always Hector’s first pick at our favorite Mexican joints. Carnitas (translated as “little meats” because they are bite-sized pieces of pork) are, instead, simmered in lard (or oil) and become tender through slow-cooking. This carnitas bowl is a riff on that recipe. By now you should be aware of the fact that I’m a huge fan of lard. However, even I have my limits. We’re not doing that here.

In an effort to create a dish that combined the sweet and savory of tacos al pastor with the rich depth of flavor as slow-cooked carnitas, I made a few alterations. First, I seasoned them with my Mexican Spice Blend and allowed them to marinate overnight. As an alternative to cooking my carnitas in lard, I have given them a quick sear in the liquid of the Gods instead. I riffed on the sweetness of piña from the tacos al pastor by using a ripe mango. Since the acidity of pineapple also acts as a tenderizer, I incorporated a hearty amber lager in the form of the classic Mexican brew: Dos Equis. We don’t lose the slow-cooked flavor of traditional carnitas because we utilize the God-send to all humankind- the crockpot.

The carnitas bowls’ awesomeness is revealed in the versatility of how they can be served. In the cookbook (which is on sale here and can arrive by CdM if you order now) you’ll find recipes for a delicious cilantro-lime rice, as well as my perfect pico de gallo and guacamole; all of which you can add to your Cinco de Mayo Carnitas Bar.

Additionally, try some of these ideas for toppings:

As always, a great margarita or beer is perfect for washing it all down. No, not for the kids! Serve them a Topo Chico instead. 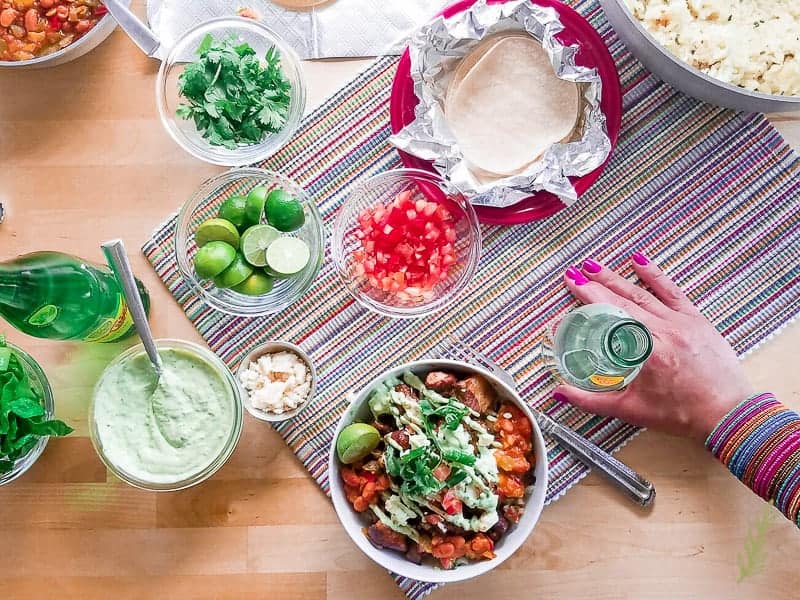 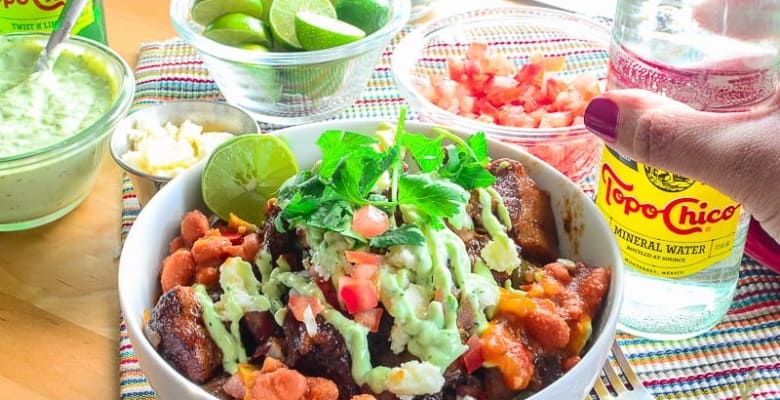 searing: is the dry-heat cooking method of cooking a cut of meat rapidly and at a very high heat to extract a deeper flavor in the overall dish. During the searing process the surface of the meat undergoes a chemical change in which the proteins, when they are introduced to high heat (such as a cast iron skillet or pan) causes the sugars in the meat to caramelize thus creating a depth of flavor and a deep color that is desirable when cooking meats. caramelize: the process of browning sugars in a food by exposing it to heat
Course Mains
Cuisine Mexican
Tried this recipe?Mention @senseandedibility or tag #senseandedibility!
348Shares 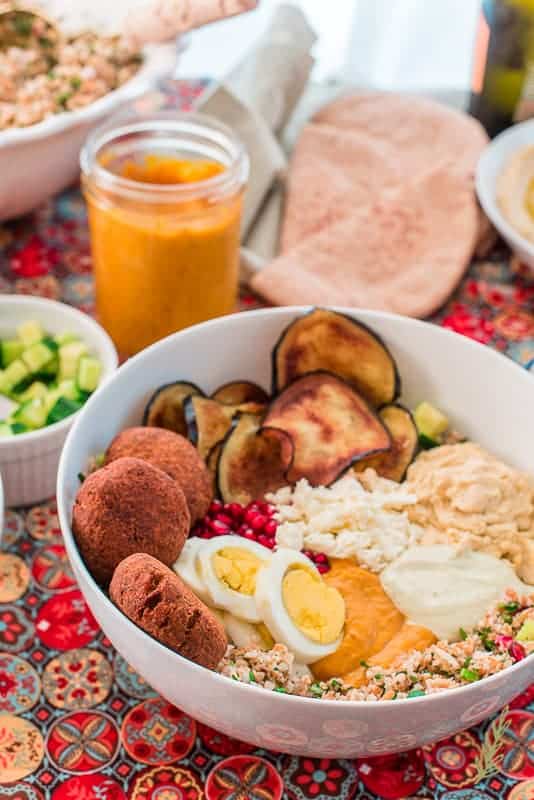 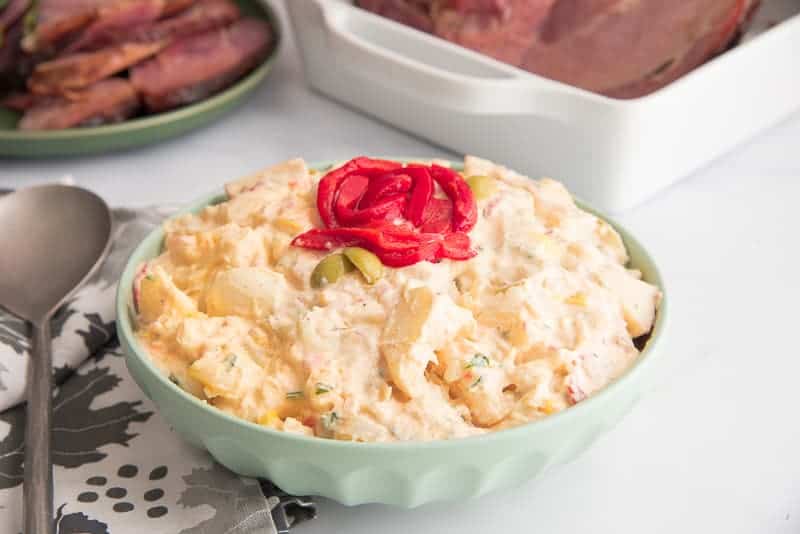 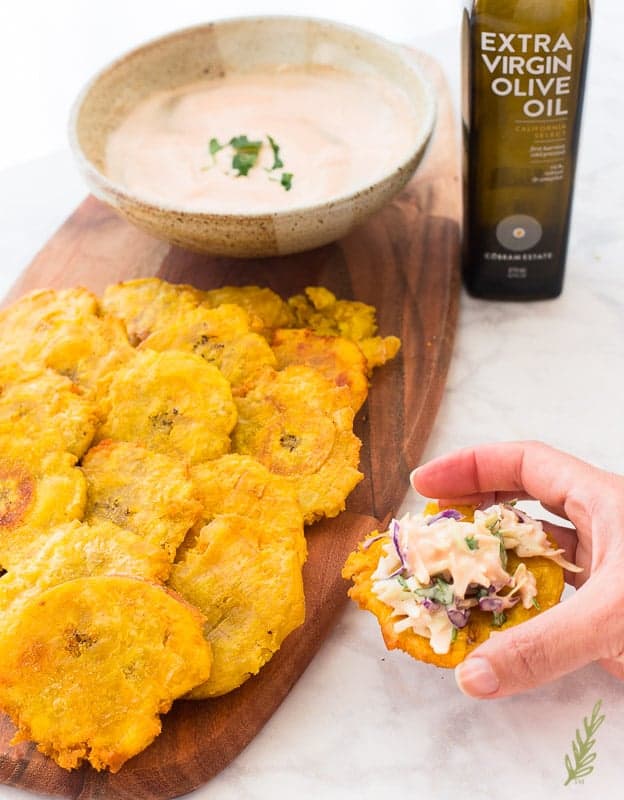