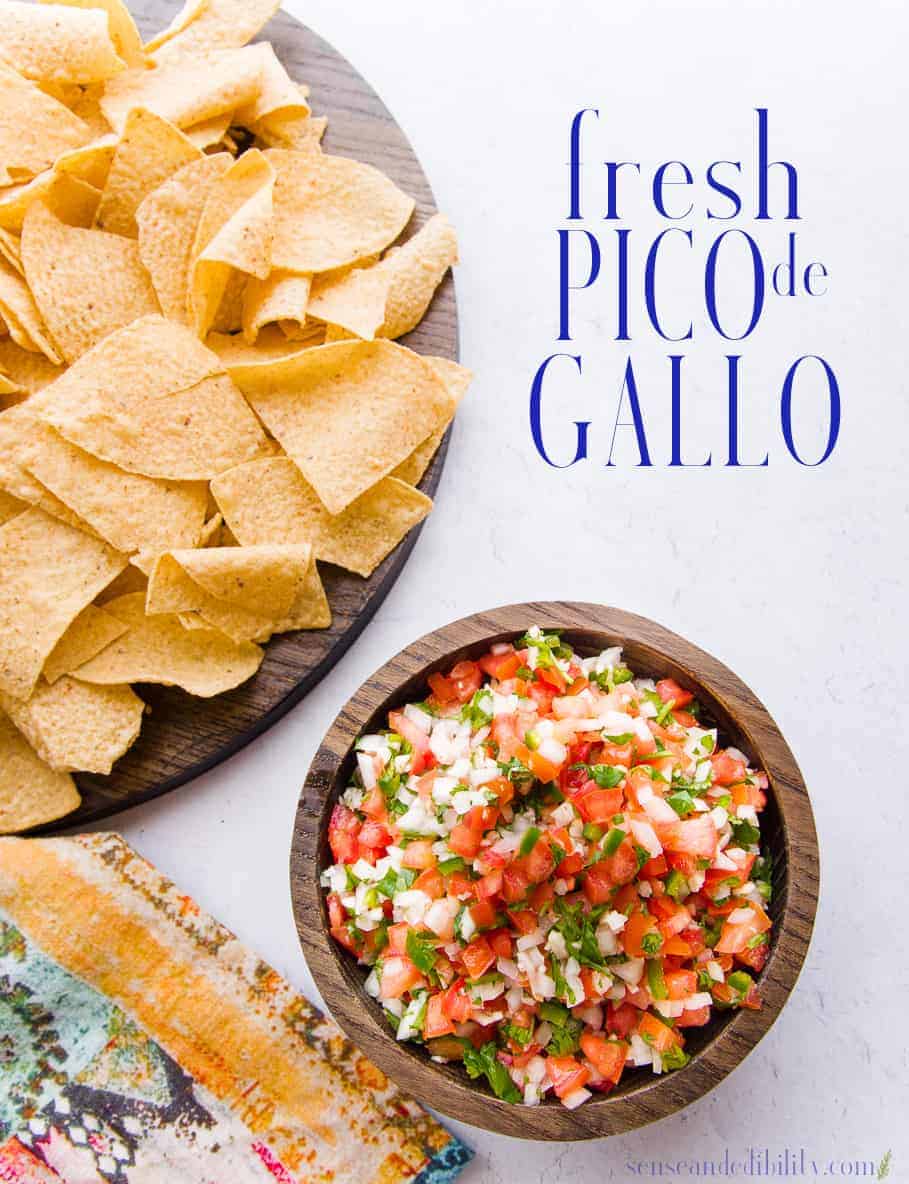 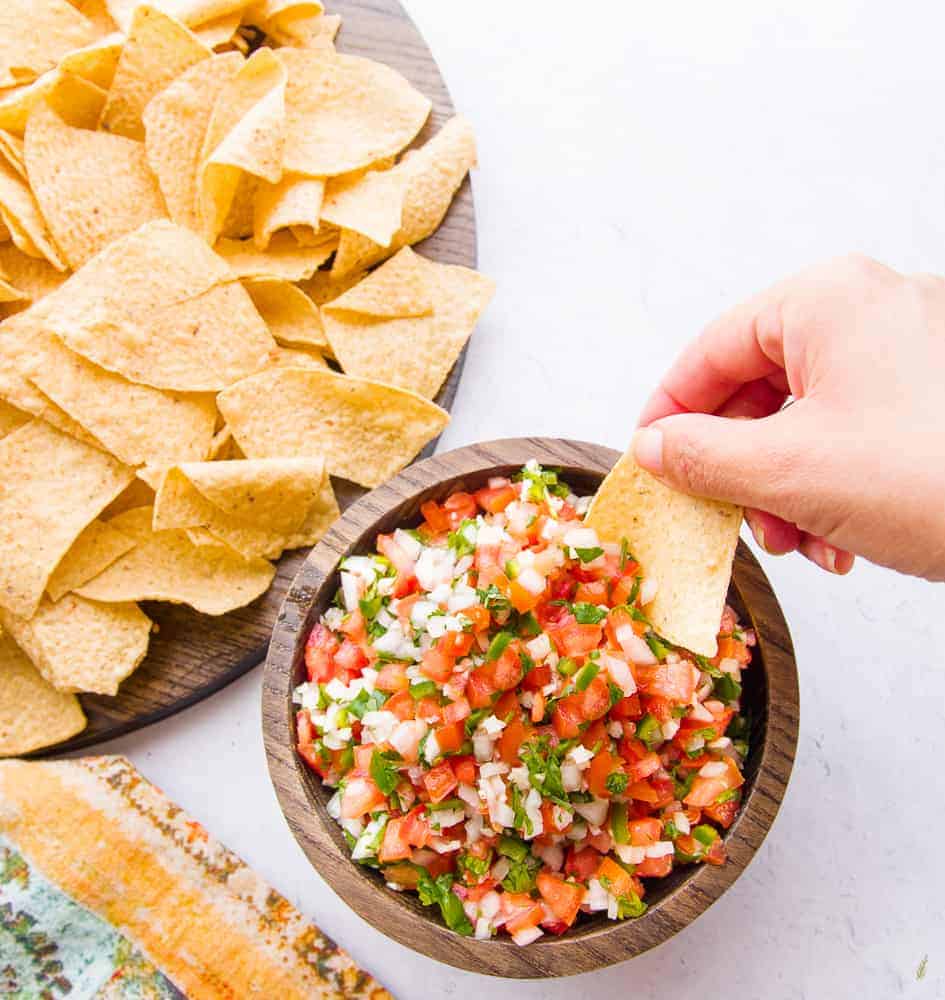 Pico de Gallo means “rooster’s beak”, but I have no idea what beaks have to do with this recipe. Maybe it’s because it looks like food a bird would peck at or has pecked over? Who knows? The colors of pico de gallo pay homage to the Mexican flag. So it makes sense that this classic tomato, onion, and pepper condiment is served at most Mexican and Tex-Mex restaurants. Now it can be served in your home.

What is Pico de Gallo?

Pico de gallo is a condiment, like salsa, except it’s one that is less “saucy”. I scoop it up with corn tortilla chips or spoon it over my grilled meats or tacos. The main ingredients are fairly simple: onions, tomatoes, garlic, and a green pepper of some kind. It is a recipe that you need in your culinary toolbox if only because of how versatile it is to eat.

Because it is a condiment that’s eaten raw, this recipe should be made with only the freshest ingredients. Save the canned and jarred stuff for some other recipe.

Here’s what You Need to Make Pico de Gallo 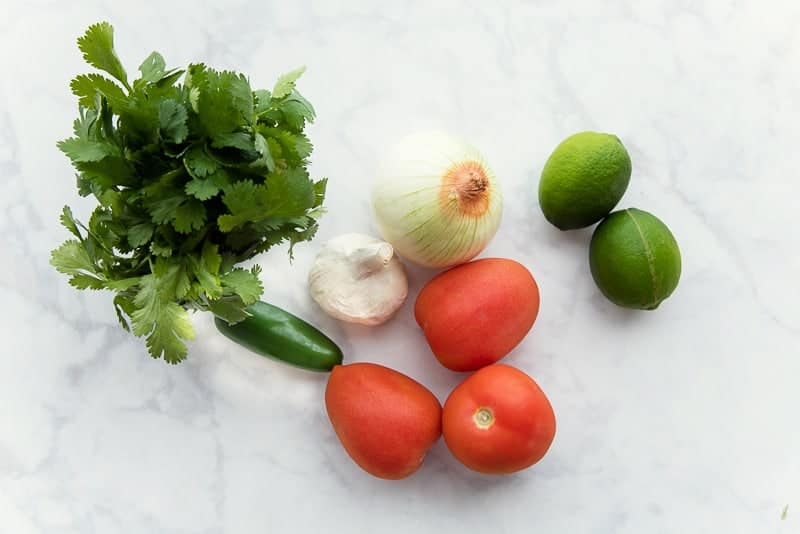 You definitely need ripe tomatoes, which are the foundation of this recipe. Roma tomatoes are what I prefer to use for my pico de gallo, but vine-ripened or heirloom tomatoes will also work. The tomatoes should be as ripe as possible without being too mushy.

You will also use jalapeño peppers. This will give the pico a bit of a kick, but, I’ll teach you how to avoid making it overly spicy. Yes, you can add jalapeño peppers to a dish and it not taste like hellfire. Serrano or poblano peppers are other options.

Yellow (or red) onions are another foundational ingredient- avoid white as they are just too pungent to use in this recipe. The remaining ingredients which will flavor the pico are: cilantro, freshly squeezed lime juice, and a dash of salt. If you want to add a hint of smokiness, a little bit of cumin can be mixed in as well, but I find it’s delicious without it.

The Best Cuts to Use when Making Pico de Gallo 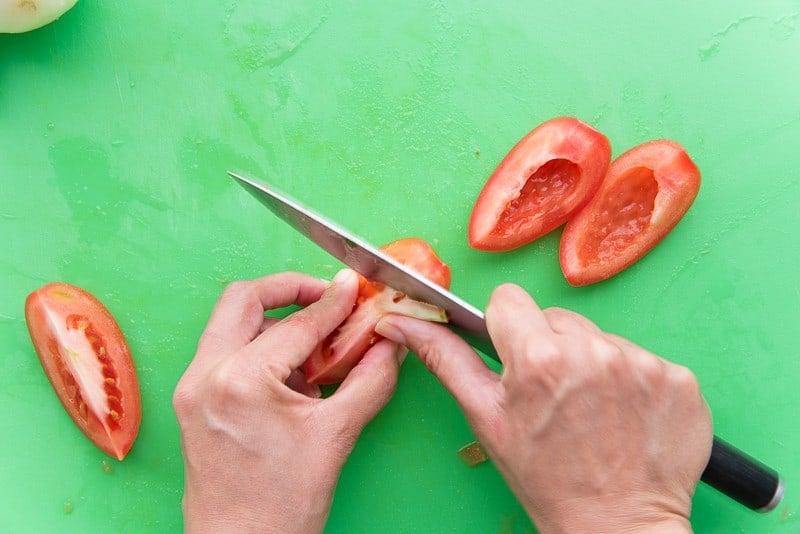 Because this is something we want to scoop up, the best way to cut the veg is no larger than a small dice. You don’t want big, honking pieces of onion or tomatoes when you’re eating something like this since it’s raw- especially the onion. While you could pulse the tomatoes and onion in a food processor for 30 seconds, I prefer the look of hand-cut veggies. Whatever is easier for you, go for it.

Start with the Tomatoes

When making this recipe, keep in mind the consistency of your pico de gallo should be “drier” than a salsa would be. Salt, that we are probably going to add later, will draw out a lot of liquid from the ingredients in this recipe. As a result, we would do well to eliminate any excess liquid beforehand. The seeds of the tomatoes hold a lot more liquid than you may think, so the first thing we need to do is get rid of them.

A large cutting board is essential when making a recipe like this. Because we’re doing a lot of chopping, it’s more efficient to cut on a large area. So, on your large board, use your chef’s knife to cut the tomatoes into quarters. Use the tip of the knife to cut under the stem of the tomato, then pinch the stem between your thumb and the knife’s blade (or your forefinger). Pull back from the tomato wedge and both the stem and the white, flavorless, core of the tomato should come away altogether. Now all you need to do is turn the piece of tomato over and push out the seeds with your thumb. Just dump them into your trash bowl.

Once your tomatoes have been de-seeded, cut the wedges into 1/4″ thick strips. Turn the strips parallel to you and cut the strips into a 1/4″ dice. Scrape the diced tomatoes into the bowl you’ll mix the pico in later. 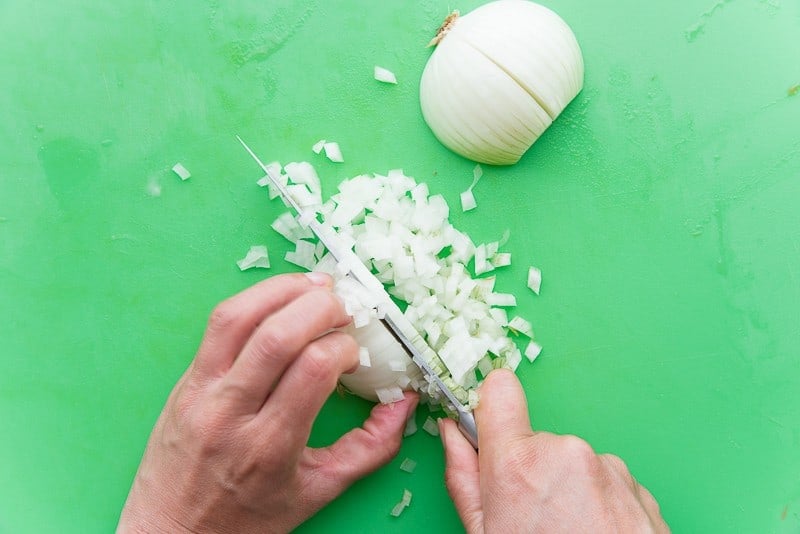 The same goes for the yellow onion, which, oddly enough, looks white in this image. After you’ve cut the onion in half and peeled it, cut 1/4″ strips perpendicular to the root. Turn your onion half and cut across the strips to create a 1/4″ dice. Add the onions to your bowl with the tomatoes.

Once you’ve diced the onions, give your peeled garlic cloves a mince before dumping them into the bowl as well. 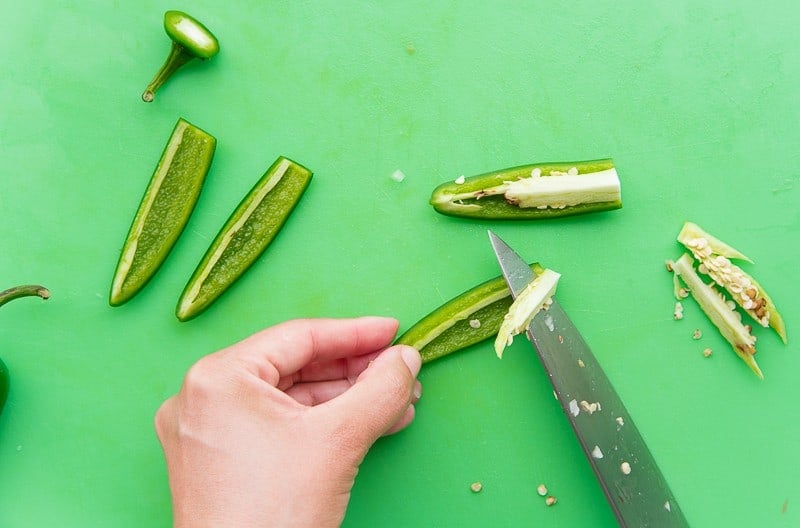 Moving on to the peppers. Again, jalapeños are the more common pepper used in pico de gallo. If you want a dip with less heat, use an Anaheim or Poblano pepper. Need something with more bite? Use a Serrano pepper. I, personally, wouldn’t go any hotter than a Serrano, or you’d risk the dip being too spicy for most people’s preferences.

Now, I have a family which is divided on their {spicy} heat preference. The hubby and I prefer things with a little more heat. Whereas the boy child wavers back and forth, and the girl child is just a wuss when it comes to anything spicy. Consequently, I can’t go all out when adding spice to my pico. To mitigate the amount of heat, I add a small amount of the jalapeño seeds to the dish. 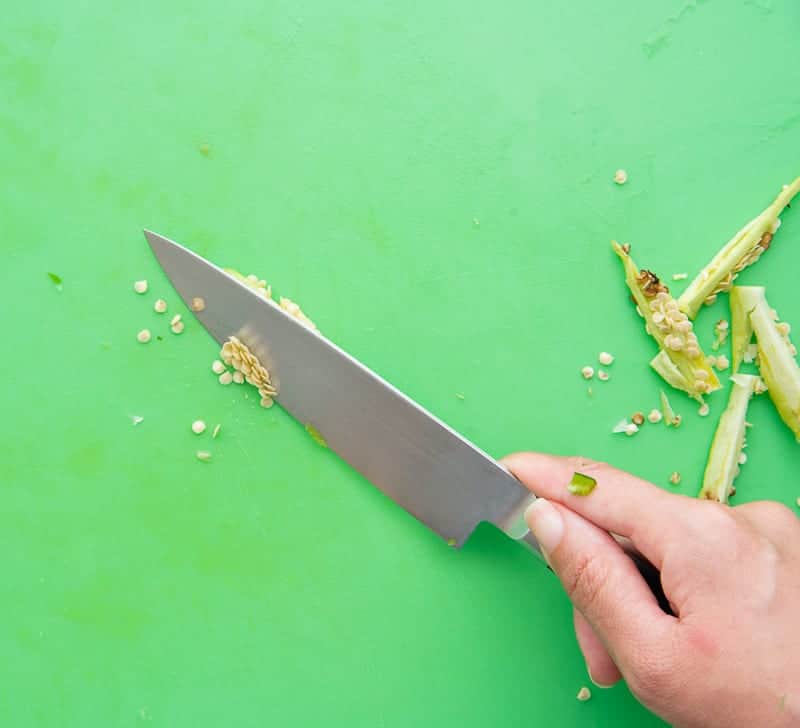 If you are Team No Spice, omit the seeds completely as that’s where a lot of heat lies. Getting rid of that white membrane will also cut down on the Scoville units. If you want a little spice, do what I do and scrape off a few seeds to put into the pico. Craving a super-hot pico? Throw all of the seeds in! 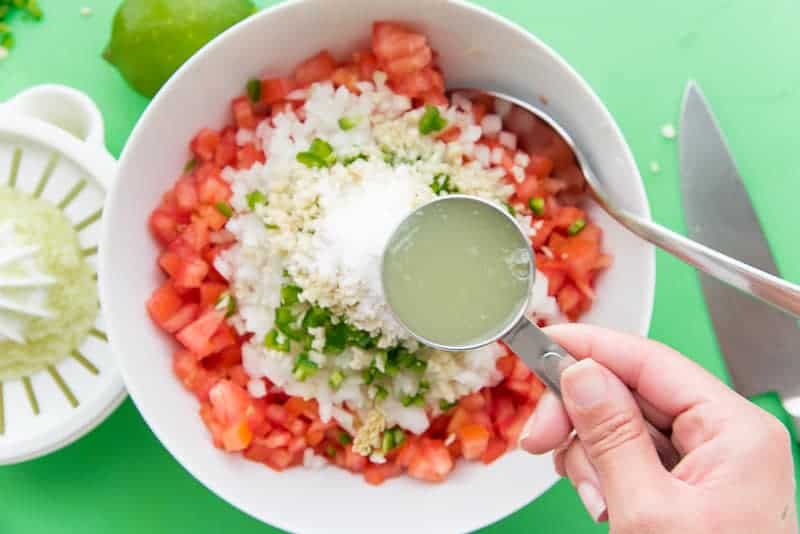 The hardest part of this recipe is over. In the large mixing bowl that’s holding the tomatoes, onions, and pepper, add a wee bit of salt, followed by the freshly squeezed lime juice.

Give the ingredients a quick toss to coat them in that lime juice. 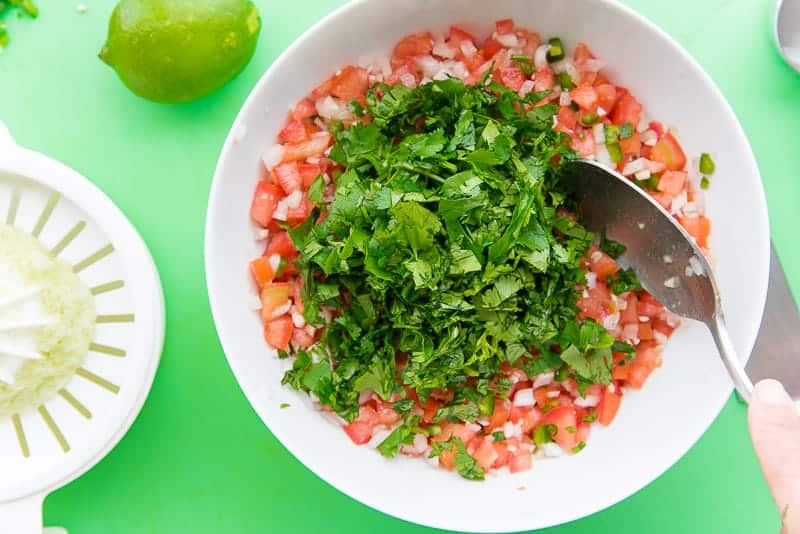 Add the chopped cilantro and toss the pico de gallo gently. I add my cilantro last to cut down on bruising it when I give it that final mix.

Once the pico is mixed, you need to give those flavors time to meld together. This usually takes about an hour, but you can technically eat the pico in 30 minutes. It will taste better the longer it sits, though.

The Variety of Ways to Serve Your Pico de Gallo 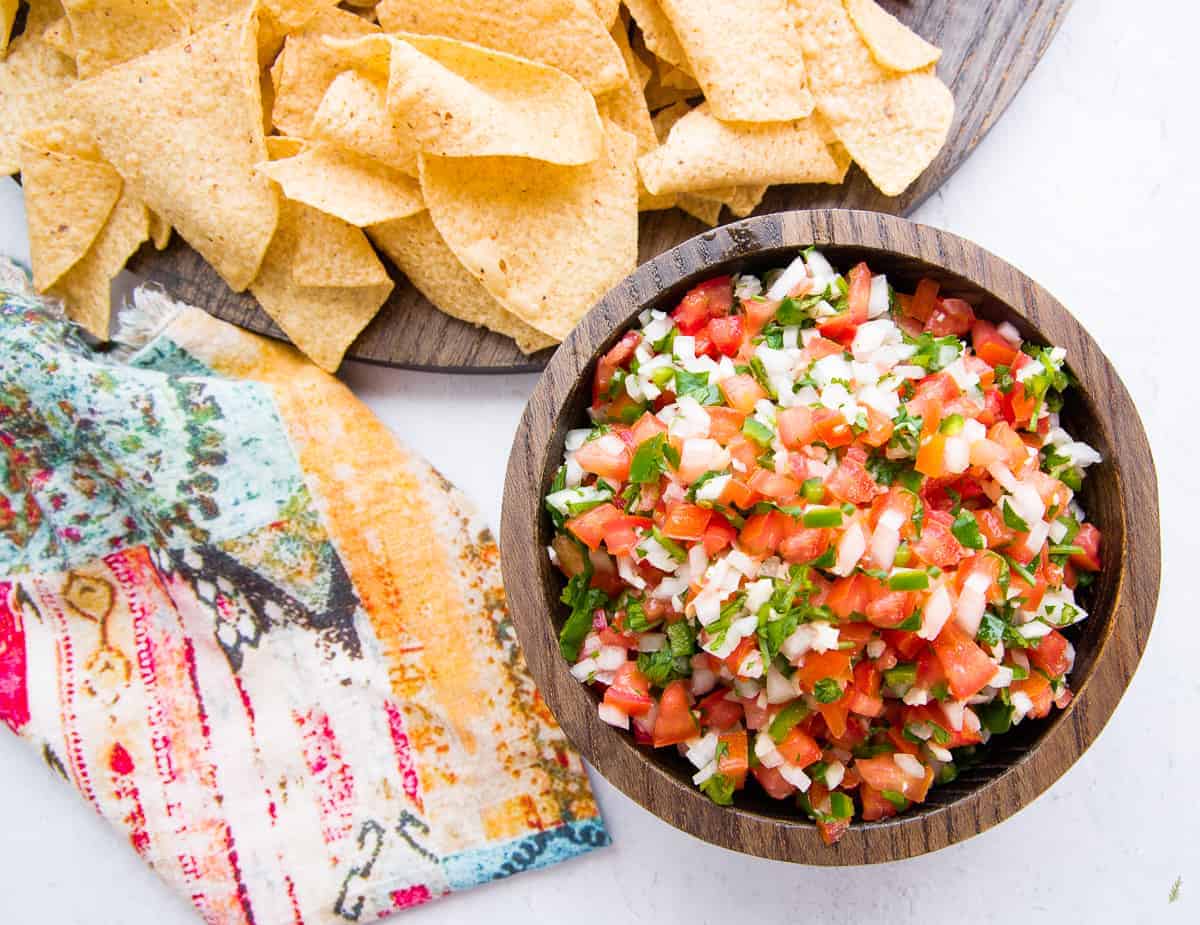 Pico de gallo is much like ketchup in that you can serve it on anything. Again, my favorite way to enjoy it is on a chip. So, I just transfer it to a serving bowl, dump some warm tortilla chips on a tray, and call it a day. 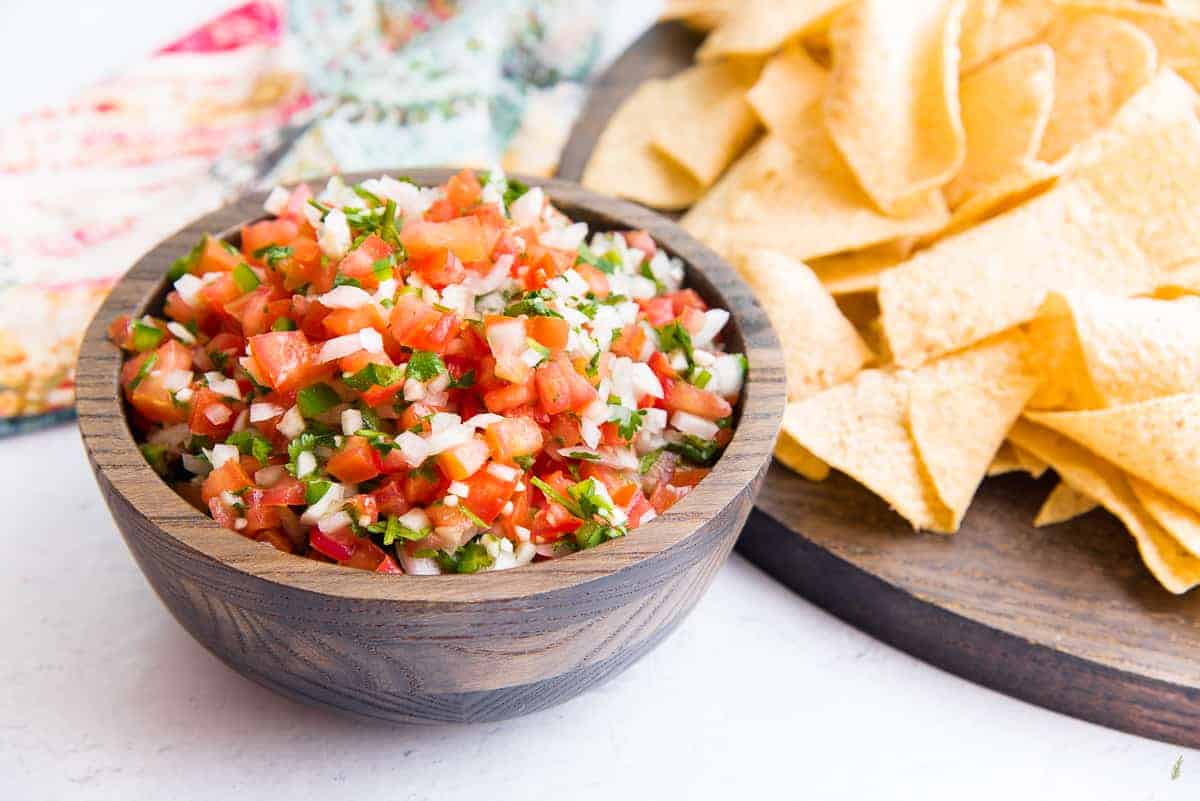 How to Store the Pico de Gallo 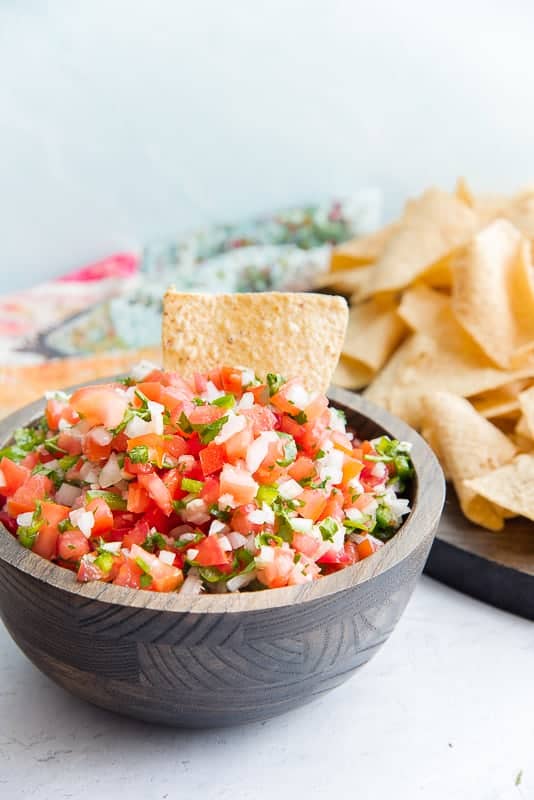 The onion in this pico is potent and will smell up your fridge, so keep this salsa stored in an air-tight container in the fridge for up to a week. Any longer and the tomatoes will turn to mush. 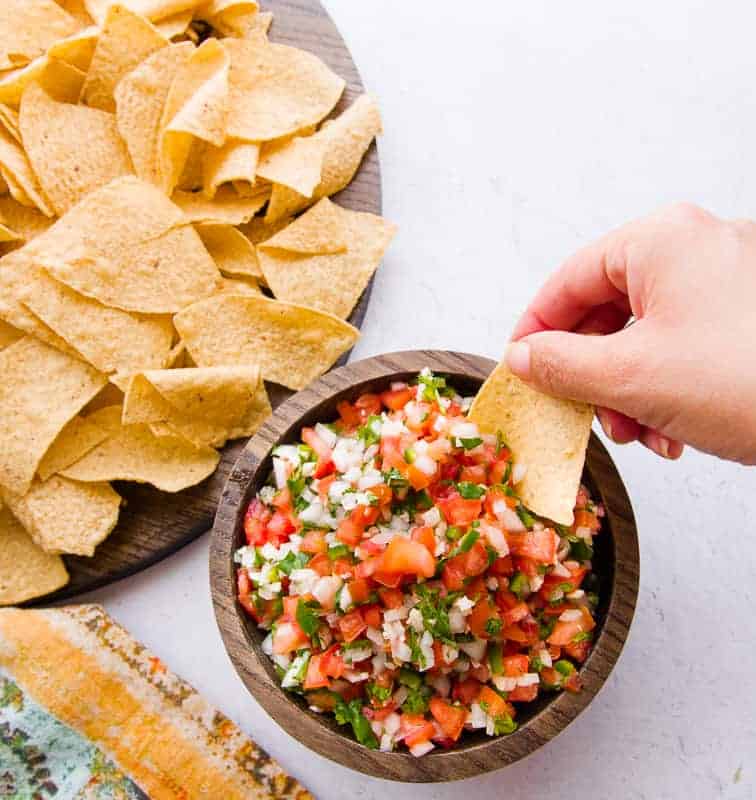 Unlike a lot of my recipes, this isn’t a great one to freeze. I mean, you can freeze it, but the flavors will end up tasting muted if you do. Just enjoy it fresh. It’s not that difficult to make, after all.

Pin this recipe for your next Taco Tuesday or Cinco de Mayo fiesta and share it with your friends. 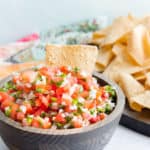 Use the freshest ingredients for the best tasting Pico de Gallo. See note section for variations.

Optional Stir-In Suggestions (change up the flavors by stirring in the following ingredients):

You’ll enjoy these other Mexican favorites: 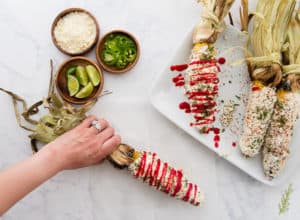 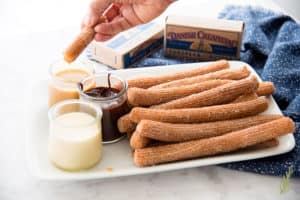