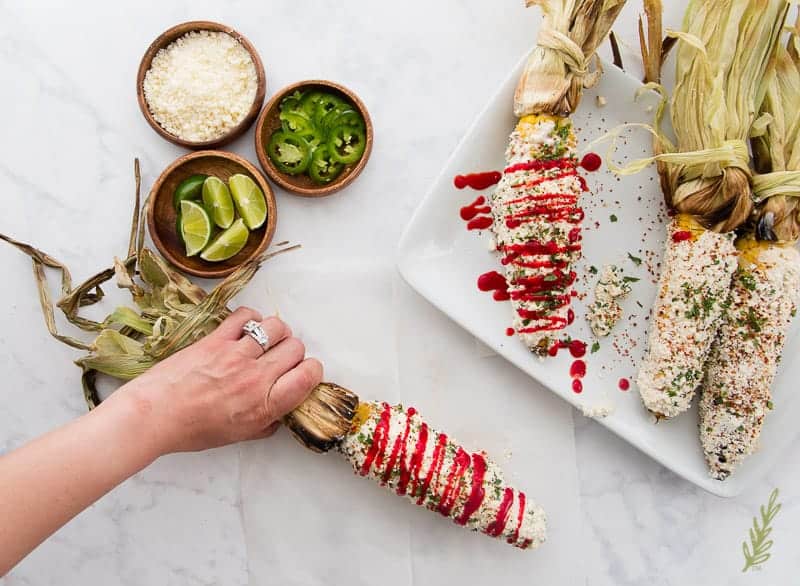 This post was originally shared two years ago, but I updated it with banging pictures and more eloquent writing and junk. Today our family received some pretty awesome news- mainly for the Soldier- but for all of us as a whole. Once we break it to our family, I’ll spill the frijoles to you. To celebrate the news, I made these Elotes. I shot these Grilled Mexican Corn on the Cob (street vendor style) two years ago while Héctor was deployed to Iraq. Because he was annoyed he didn’t get any, I made the elotes again today. Partly to shut up his whining, but also to celebrate his exciting news. Now, I want to share it with you in case you’re stuck on what to make for Cinco de Mayo.

Elotes are what most Mexican, Central and South Americans call corn on the cob. I limit the term to those regions because those of us that are Puerto Rican, Dominican, and Cuban, usually call corn maíz. You should’ve seen Héctor and I the first time we ordered corn in El Paso! The waiter looked at us like we were crazy- speaking perfect Spanish, but not knowing the “proper” term for corn. To this day, our El Pasoan friends still make fun of our “Puerto Rican Spanish”.

The great thing about these corn on the cob, though, is not its name. Elotes aren’t just boiled and slathered in butter like most of us are used to. These beauts are first steamed in their husks over a charcoal grill before having their kernels exposed and charred over that same grill. Afterwards, they’re bathed in a tangy crema schmear before being encrusted in creamy cotija cheese, cilantro, and Tajín chile seasoning.

Now you can probably understand why the Soldier was so ticked off I didn’t make it for so long. And this is a person who claims to hate corn. Make two per person because these elotes are filling enough to eat as an entree. If you’re not a fan of eating corn off the cob, you can cut the kernels off of the cob after grilling and make this an Mexican Street Corn salad instead. 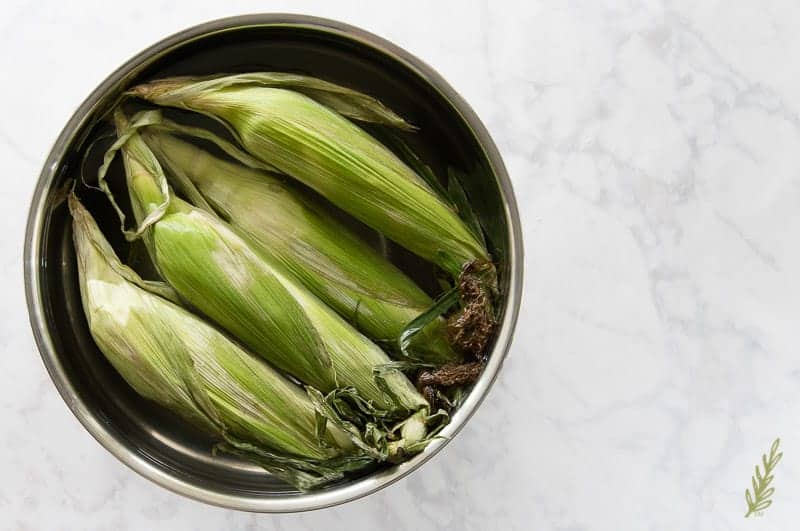 I totally spaced on getting my infamous ingredients shot, so please forgive me! Six ears of corn on the cob, unshucked, is the obvious ingredient; but you’ll also need Mexican crema agria (or sour cream), mayonnaise, fresh garlic, fresh limes, cilantro, Tajín classic seasoning, and (if you like spice) chamoy and Mexican hot sauce.

Crema agria (the Mexican sour cream) is different from the sour cream you may be used to in that it’s more runny and more tangy. If you can’t find it in your grocer’s dairy section, just use your favorite sour cream. I’ll tell you more about the chamoy and Mexican hot sauce later. You’ll also need a charcoal grill for grilling the elotes. The key to getting the most authentic flavor is that charcoal. Without it, you can’t capture the smokiness that elotes from a street vendor has. A great Weber grill is less than a hundred bucks and is a great investment for this, and many more, recipes.

Prep the Grill and the Corn

Preheat your charcoal grill to about 400°F.
While your grill is heating up, place your elotes into large container and cover them with cold water. This step is two fold. First, it cleans your corn and drowns any scalliwag insects. Second, it saturates your corn husks to prevent them from catching fire while you grill the corn. When you cook the corn, you’re first going to steam, then char the kernels. This will give you perfectly soft corn. Allow the corn to soak while you make the schmear. 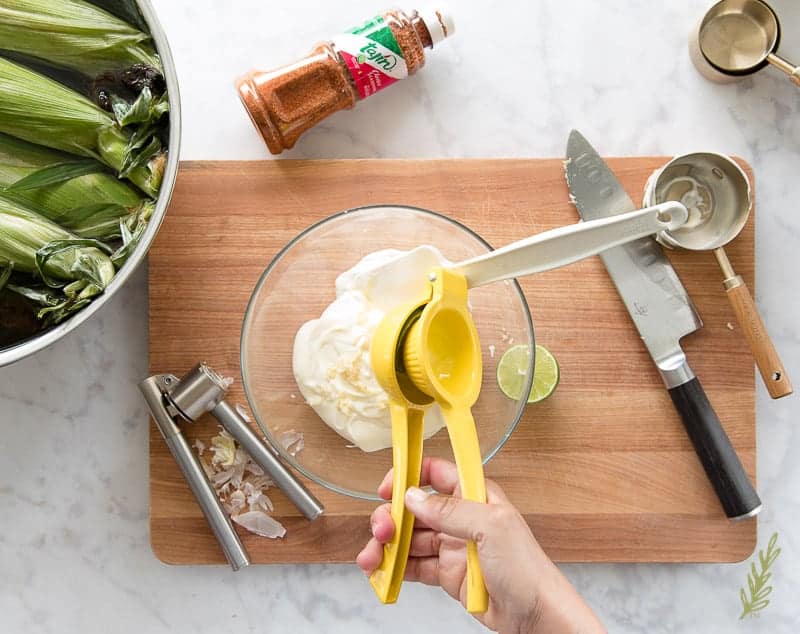 The next step is to prepare your schmear. If you like to plan ahead, this schmear can be made up to a week in advance. Just keep it refrigerated after mixing it.

Combine the crema agria, mayo, and crushed garlic together in a mixing bowl. Use a citrus juicer to squeeze the juice from one lime and add that to the bowl, as well. 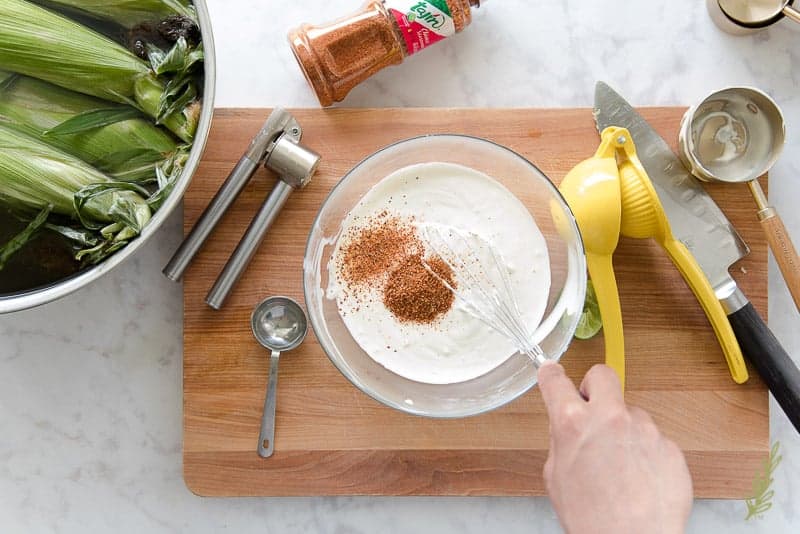 Whisk in a tablespoon of Tajín classic seasoning, which is like Mexican season-all. This spice blend isn’t terribly hot, but it does make your food a bit more exciting. You can find it in the Hispanic foods aisle of your grocer’s store or, often, in the produce section (because it’s great on fruits). Don’t worry about adding it- in other words, don’t be so afraid of its spice that you omit it. When mixed into the other ingredients, you hardly know it has chile in it, but it’s necessary to balance the flavors. 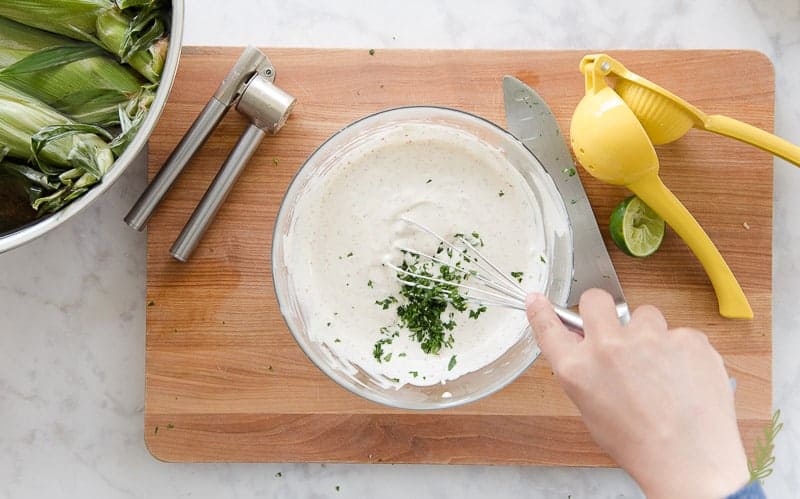 Finely chop a 1/4 cup of cilantro leaves with your chef’s knife and whisk a tablespoon of them to your schmear. Reserve the rest for sprinkling on your elotes later.

Now, taste the schmear and adjust the flavor with up to a teaspoon of kosher salt. Be reserved with the salt, though, since you may want to top your finished elotes with the slightly salty cotija cheese and more Tajín.

Put the bowl of schmear into the fridge until you’re ready to coat the corn. 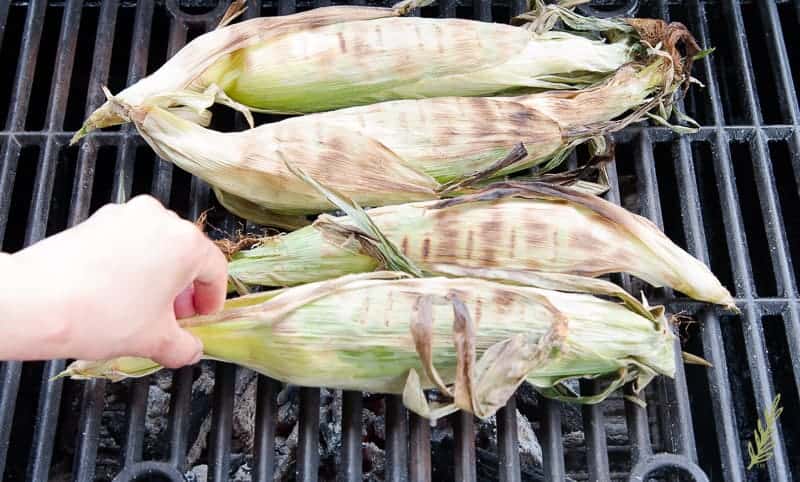 By the time you finish the schmear, your grill should be at temperature- once again, we’re shooting for 400°F. I honestly think that those thermometers that are on the grill’s lids are purely for decoration, they’re so notoriously inaccurate. Because of my conspiracy theory, I use an infrared thermometer for getting the most accurate temperature. I mean, there’s no point in going through all of this trouble making elotes if we’re just going to undercook or burn them, right? Just be sure when using thermometers like this one, you set a cast iron pan on the grill to get the most accurate reading, or else the thermometer will shoot through the grates and pick up the temperature of the coals themselves.

Plunk the soaked corn onto the grill. That’s it! Don’t shuck them yet because that husk is going to trap the moisture inside and steam the corn kernels. Without that steam, the corn will go from raw to charred and still have too much crunch to be edible. Steam the corn for a total of 15 minutes, turning once halfway through the cooking time. 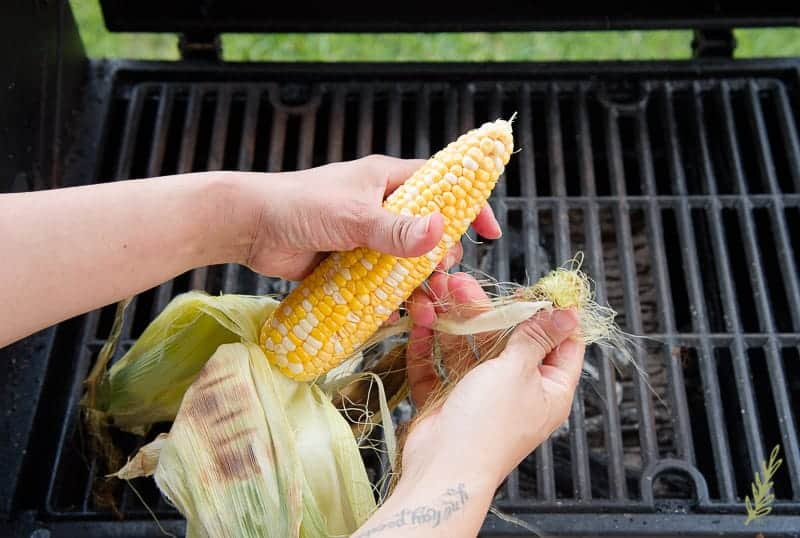 I’m going to show you my handy-dandy way of shucking the elotes to make the charring (and serving) of them easier.

Once they’re done steaming, remove them from the grill- just put them on a sheet pan or platter. When the elotes are cool enough to handle, pull back the husks to expose the kernels. Remove the fibrous corn silk and discard it. 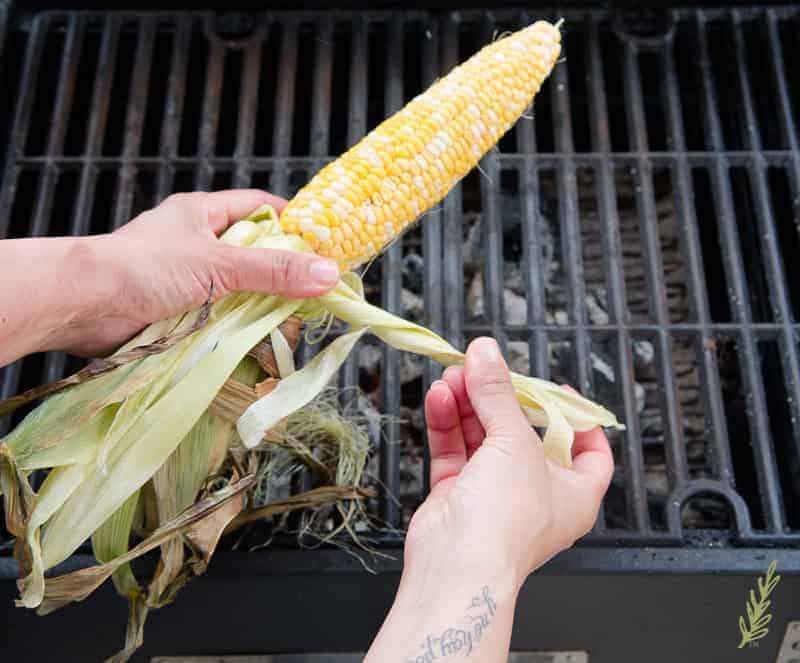 Pull back the strips of the husk and gather it into your hand. Separate two strands of the husks and twist them slightly. 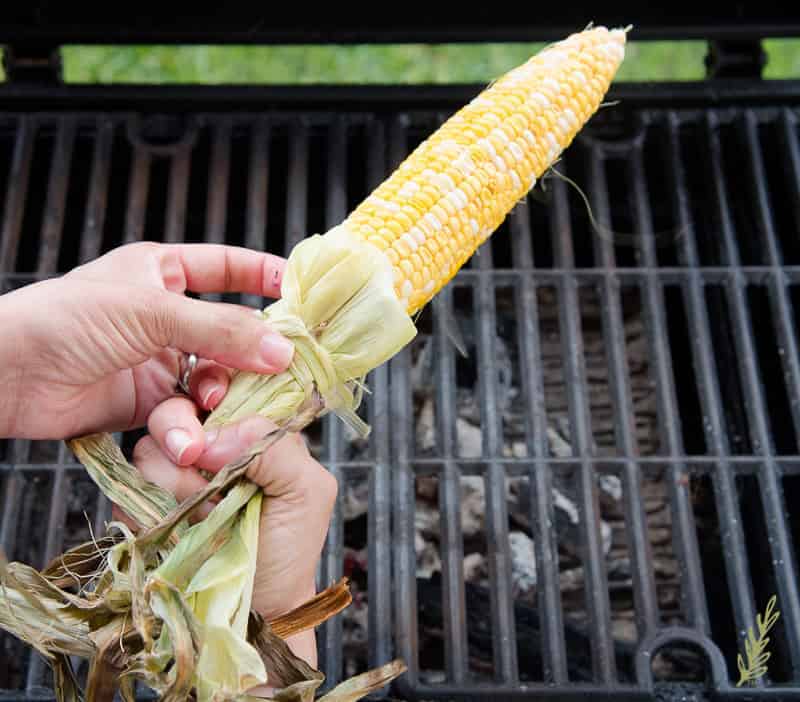 Wrap that twist of husk around the rest of the husk you’re clenching once or twice and fold it under itself to form a knot. 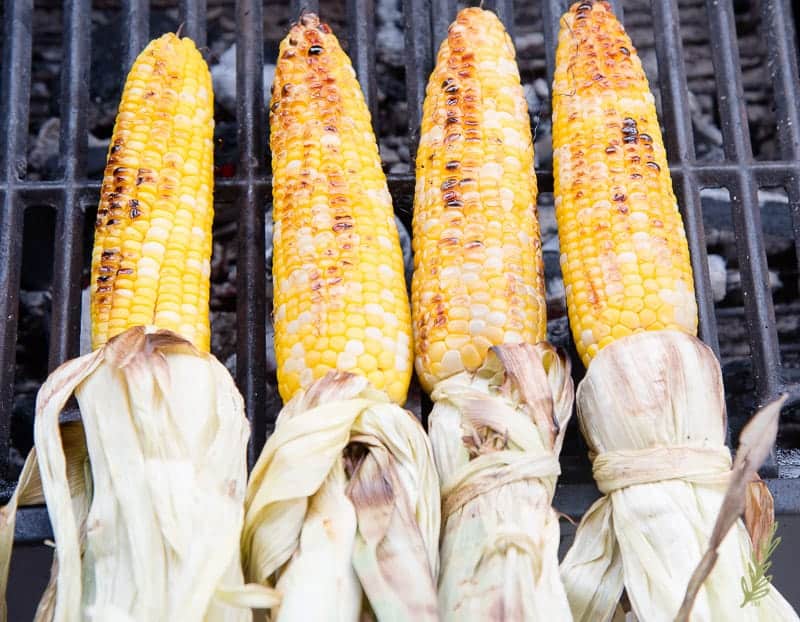 Now you have a handle for turning the elotes as you char them, and one for holding on to while you eat!

Place the corn on the grill with the husks hanging off the edge of the grate. Char the elotes for 2 1/2 minutes on each side (there’s technically four sides when grilling corn). Rotating the corn as you hear it “speak” to you. It’ll sound like snapping twigs, or popping corn (imagine that!). Once  you begin hearing that, it’s time to rotate the ears of corn. Slowly, the corn will take on this dark brown, golden color and will begin to taste nutty and so-freakin’-amazing. 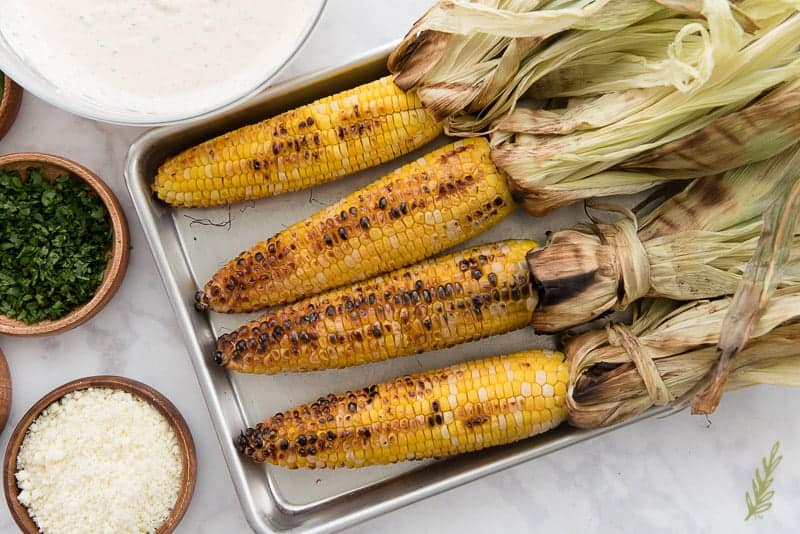 Once your elotes look this amazing, remove them from the grill and take them back into the kitchen. Go ahead and grab the schmear out of the fridge and set up an assembly line with the schmear, the finely crumbled cotija cheese, the rest of the cilantro, and the Tajiín.

*Now, if you don’t eat corn off of the cob, now’s when you’ll want to cut the kernels from the cob. Put the kernels in a mixing bowl and toss them in the schmear (all of it), the rest of the cilantro, and 1 cup of cotija cheese. Serve it in bowls and allow your diners to sprinkle on more Tajín if they’d like.* 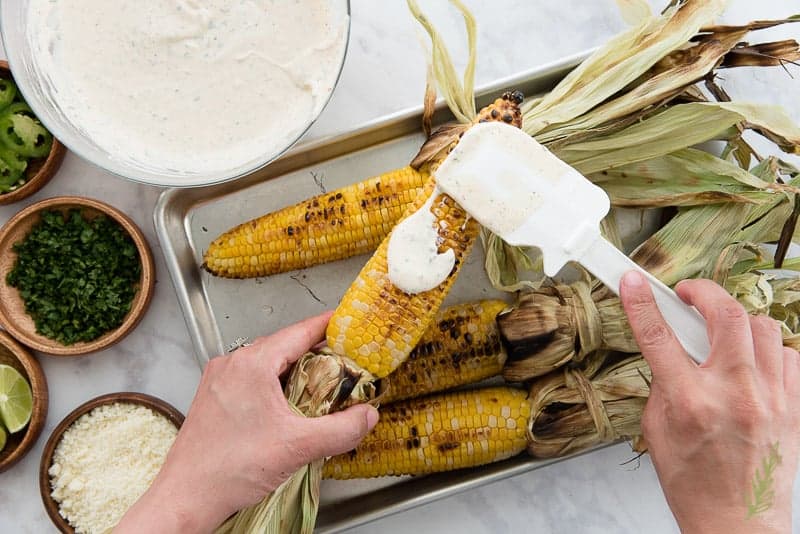 Use a rubber spatula to spread the schmear onto the ears of corn. I usually coat an ear of corn before moving onto the rest of them. The schmear is too messy to coat them all at once and set them into the pan, and I have issues with goopy stuff on my hands. 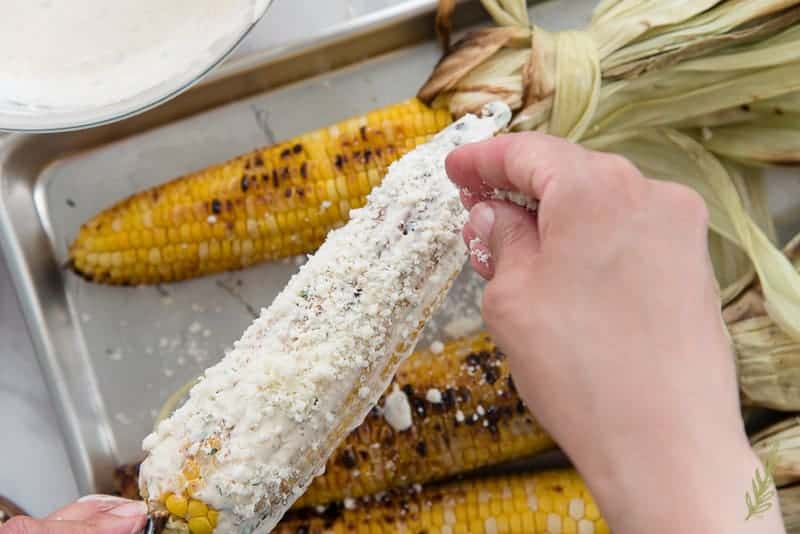 Once you’ve slathered the schmear over the entire ear of corn, grab a handful of the cotija cheese and press the corn into the palm of your hand. This is the most efficient way to coat the elotes with the cheese. You could also sprinkle it like I’ve done above. Cotija is a mildly sharp Mexican cheese that’s creamy and holds up well in this dish. A great alternative is queso fresco or even parmesan. 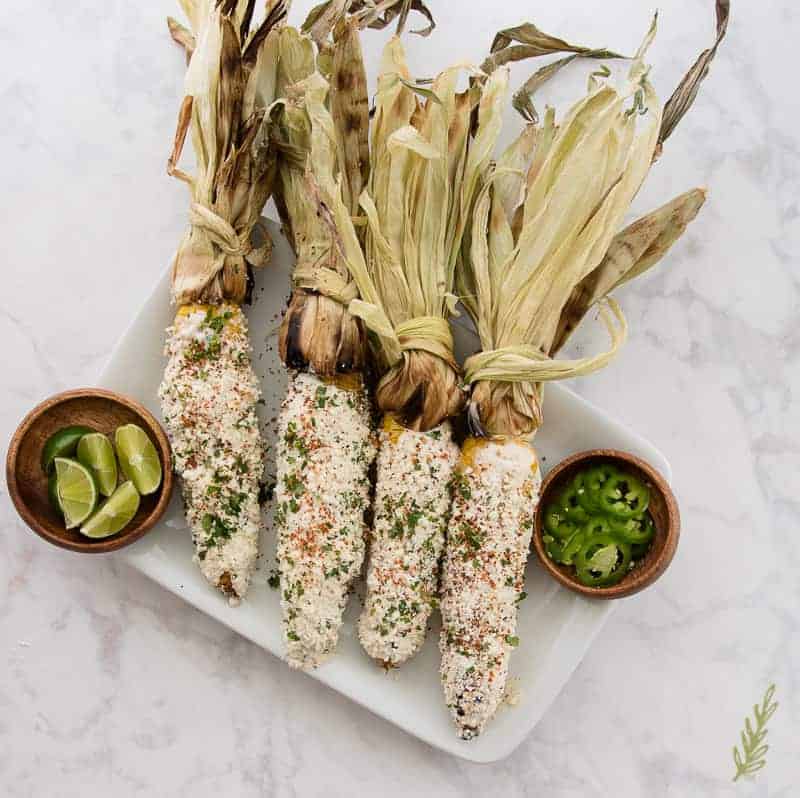 After coating the elotes in the cheese, sprinkle some cilantro and Tajiín over them.

Serve with lime wedges and thinly sliced, or minced, jalapeños. 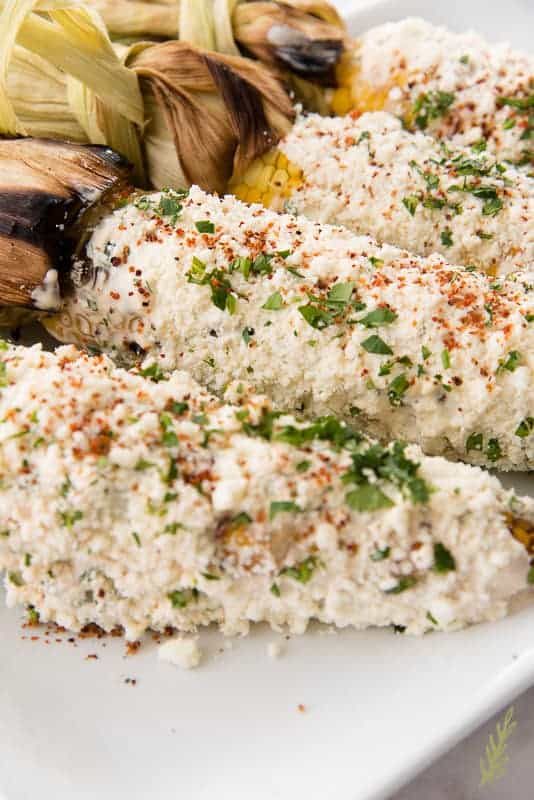 This is for our sissy twins.

Amp up the spice! 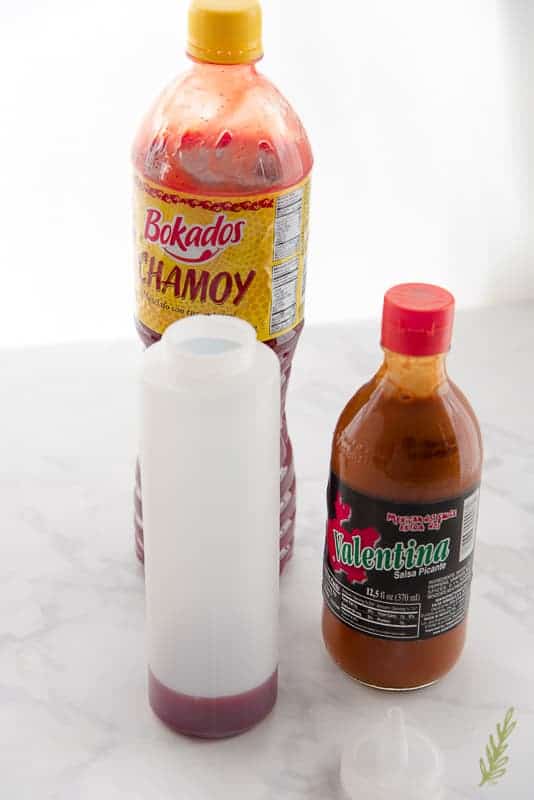 If you’re a gangster like me and Héctor, you need to level up on the spice. Ulcers be damned- YOLO!!! (do people still say YOLO?)

I drizzle a inferno-like condiment that I make with chamoy and Valentina Mexican Hot Sauce. You’ll probably recognize chamoy from such recipes as my Mangonadas. But, Valentina is hot sauce that has some type of addictive ingredient in it. I learned that it is the hot sauce that 9 out of 10 Juarenses prefer. I only trust Mexicans to tell me what type of Mexican hot sauce is best.

To make the condiment that I’ll dub “fire-in-the-hole”: combine 1/4 cup of chamoy and 1 tablespoon of the Valentina in a squirt bottle. Cap it and give the bottle a vigorous shake to combine the two… 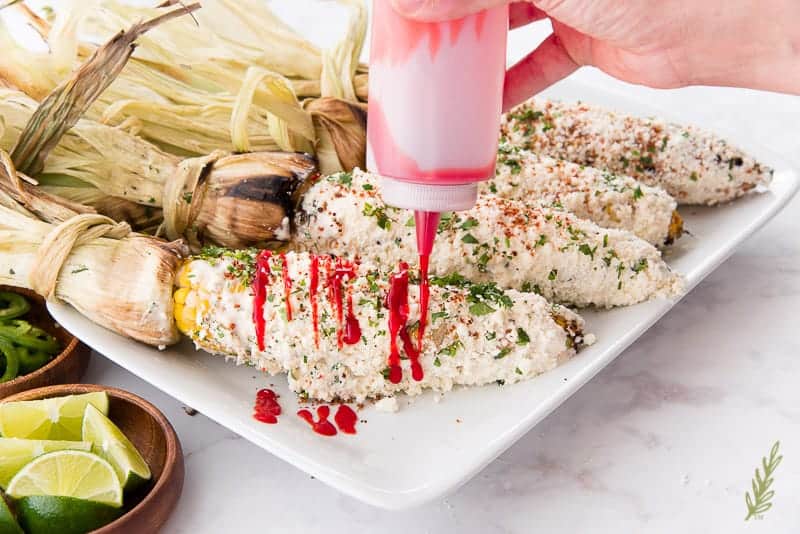 …then drizzle on a little… 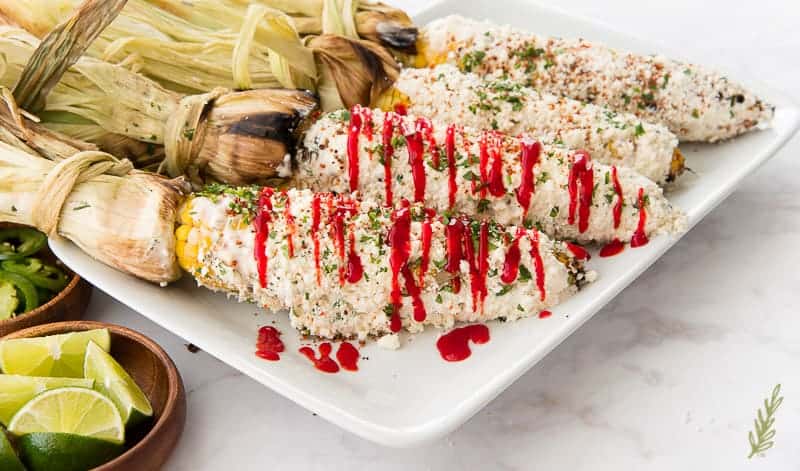 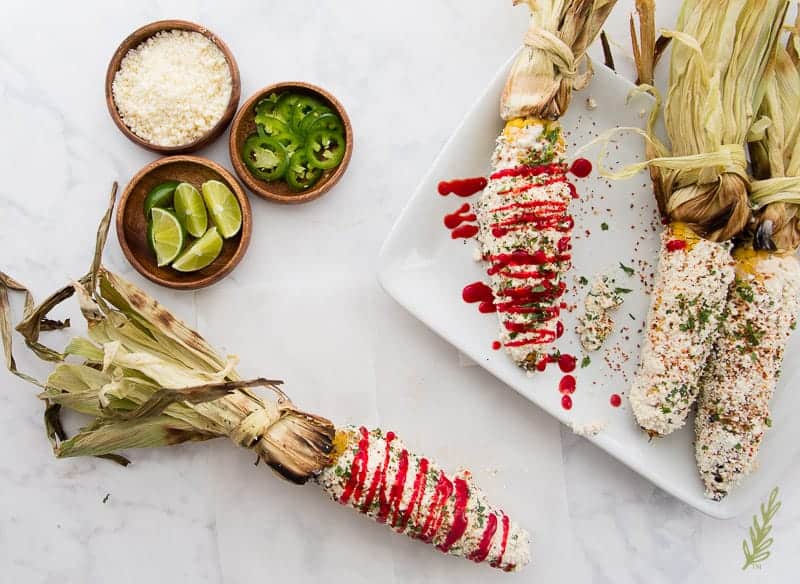 Serve your elotes after you’re done dressing them up to your stomach’s content.

Stay tuned for our good news (I think I can share it this week)! Pin and share this recipe for inclusion in your Cinco de Mayo meal plans! 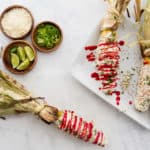 Choose heavy ears of corn with the husks still in tact. Cotija cheese is recommended, but parmesan can be substituted.

Mexican crema agria can be found in most markets next to the sour cream or in the cheese section.

Cotija cheese is usually found in the same section as most cheeses. If you're unable to locate it, grated parmesan or crumbled feta can be used as substitutes.

Tajín is commonly found in the Hispanic section, or in the spice aisle, of most major supermarkets.

The crema mixture can also be used as a condiment for tacos or nachos. It can be made up to a week in advance. Just keep it refrigerated after mixing it.

*If you don't eat corn off of the cob, cut the kernels from the cob after removing them from the grill. Put the kernels in a mixing bowl and toss them in the schmear (all of it), the rest of the cilantro, and 1 cup of cotija cheese. Serve it in bowls and allow your diners to sprinkle on more cotija and Tajín if they'd like. 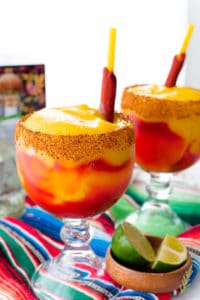 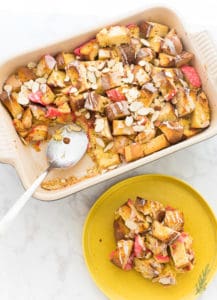