Garam Masala means “Hot Spices”. But, the reality is, as with most languages, something gets lost in translation. So, I drilled my Indian friend for a reliable translation because “hot”, to me, means “spicy”. She explained and it’s not so much “Hot”, but more “mellow, or warming”. Considering the fact that very few of the garam masala blends I’ve tasted were spicy-hot; I found that to be a more accurate description. Now, when I explain garam masala, I do so as a “Warming Spice Blend.” 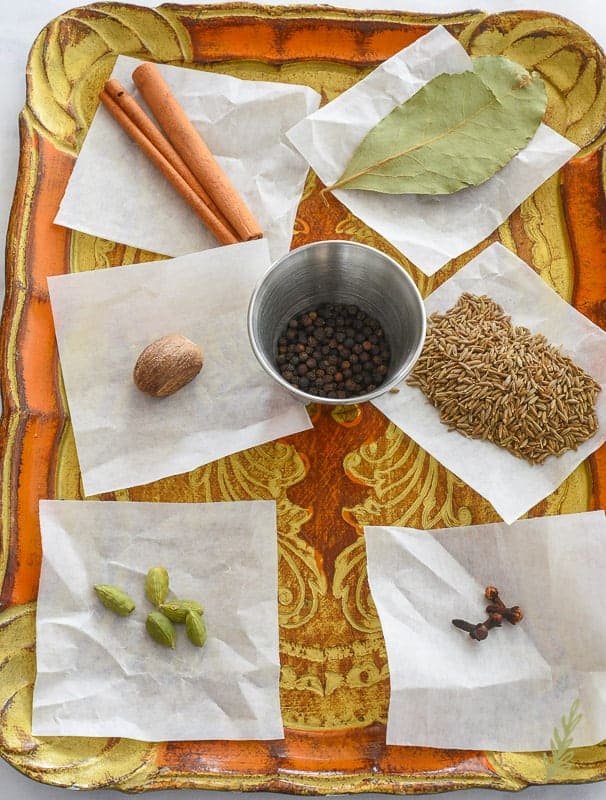 Use whole spices in this recipe because I don’t believe spice blends should be made with previously ground spices. Few of us can pinpoint the exact time our spices were ground. Sure, “they” may list a date on the bottle, but can we really trust “them”? Whoever “they” are. The reality is, grinding your own spices is not only easy- it’s also worth it. Pick up an inexpensive coffee grinder and dedicate its use to spice grinding. You don’t want to use this for coffee once you’ve used it for spices. I’ve made that mistake once and learned my lesson. Also, avoid buying these spices from your bulk aisle. Because, really, no one knows when those bins are changed out either.

Keep your spice purchases small and frequent to ensure the freshest and most pungent spice blends available. Once ground, this garam masala blend will stay fresh- if kept in an air-tight container in a dark, cool place- for up to two months. Since I use mine so frequently, it never lasts that long. This recipe will make a cup of garam masala which is enough for a few recipes. One of my favorite recipes to use this in is this Vegetarian Curried Cauliflower. 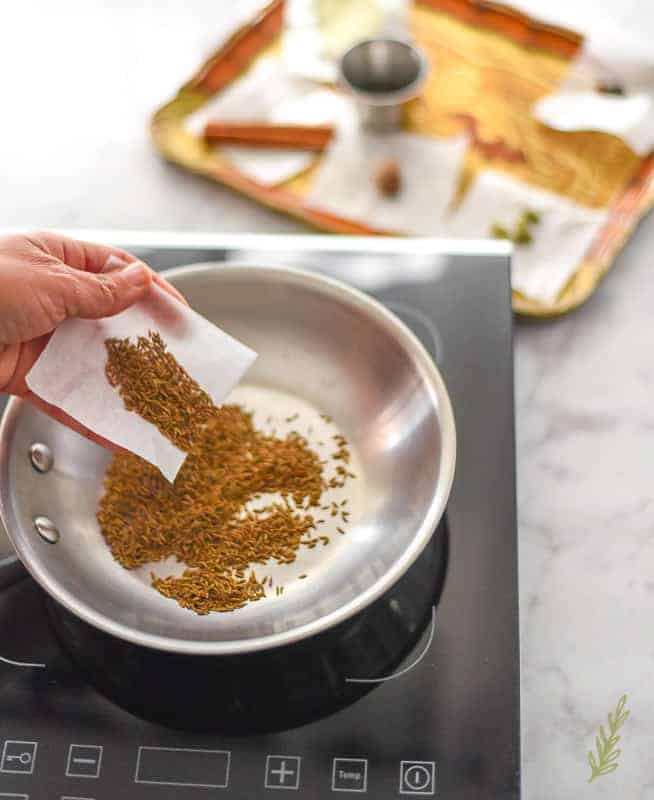 The recipe is so straightforward: warm your spices.

I start with the cumin seeds. Cumin is related to parsley, and it resembles caraway, but it doesn’t have the same licorice flavor. I describe cumin as a warm fire trapped in a seed. Poetic, I know. Pour the seeds into a saucepan and toast them gently over low heat for a minute. Make sure to move the pan about to keep the seeds from burning. 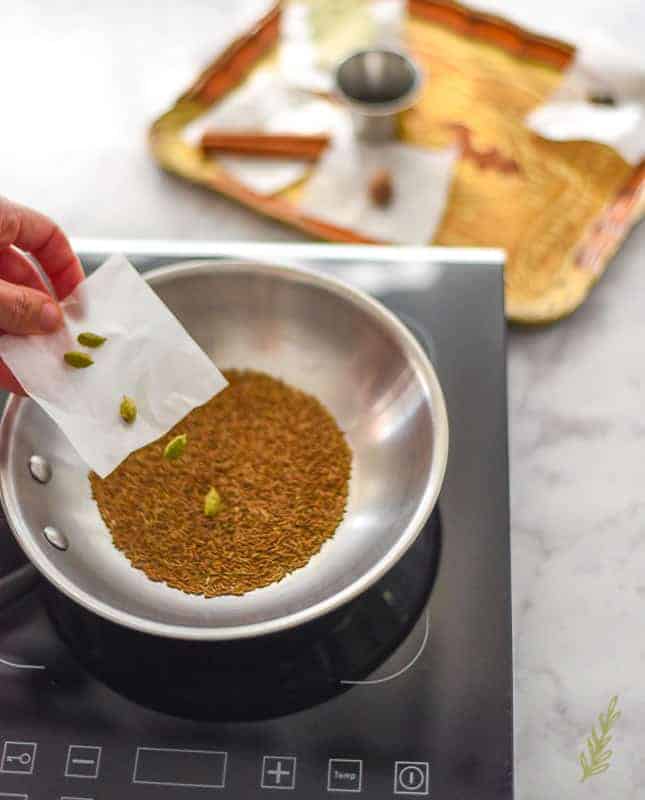 The next spice we’re adding is the cardamom. Now, you can use either black or green cardamom. Here, I’m using green because it’s what I had in the pantry. Since green cardamom is more pungent than the black, you don’t need as much of it as you would of the black. Black cardamom is more mellow and almost minty in flavor.  Before adding the pods to the pan, give them a whack with the butt of your knife to break them open. Toss them into the pan to toast along with the cumin. 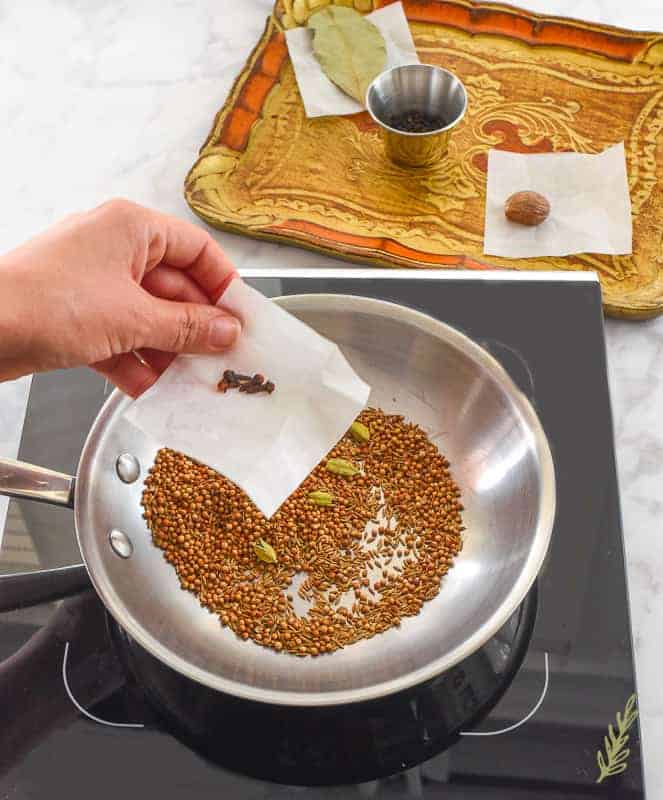 Next into the pool are the cloves. Now, cloves aren’t my very favorite, but when balanced out with all the other spices, I find they’re a welcomed addition. Interestingly enough, people actually smoke cloves in cigarettes in many parts of the world. I, personally, prefer to keep my lungs clove-free, so I’ve never tried it. Cloves, like cardamom and cumin, are another spice that’s widely used in the Eastern Hemisphere. Add them to pan and continue toasting, low and sloooow. 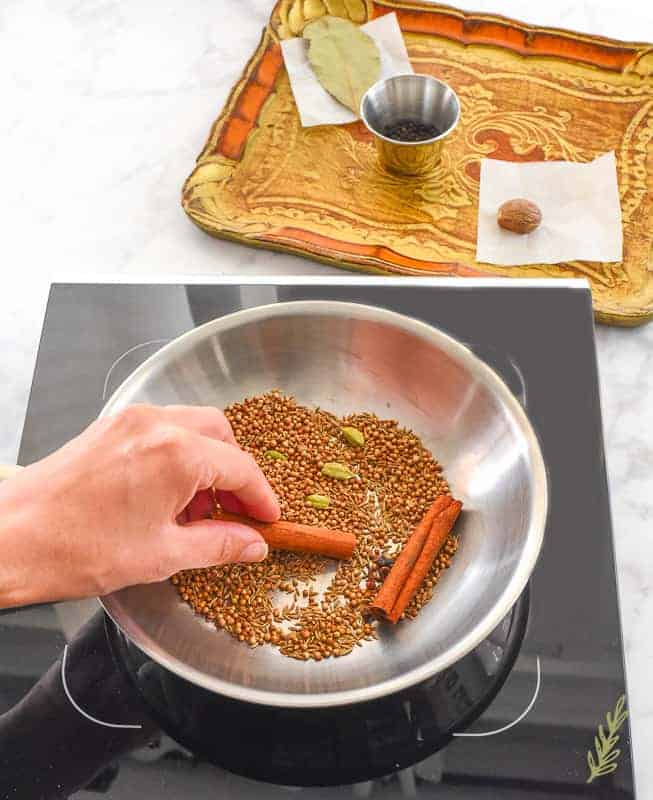 I got into a debate with someone on social media about what cinnamon is. Yes, I take food seriously. I also recognize I should’ve been ashamed for “going in” on someone over a spice. But…well, she shouldn’t have been wrong.

Cinnamon is actually the bark of trees from the Lauraceae family. The inner bark is peeled from the trees, beaten and allowed to dry. The bark we commonly see in our super markets curls naturally as it dries. This is what we are going to add to our pan to toast along with the spices. 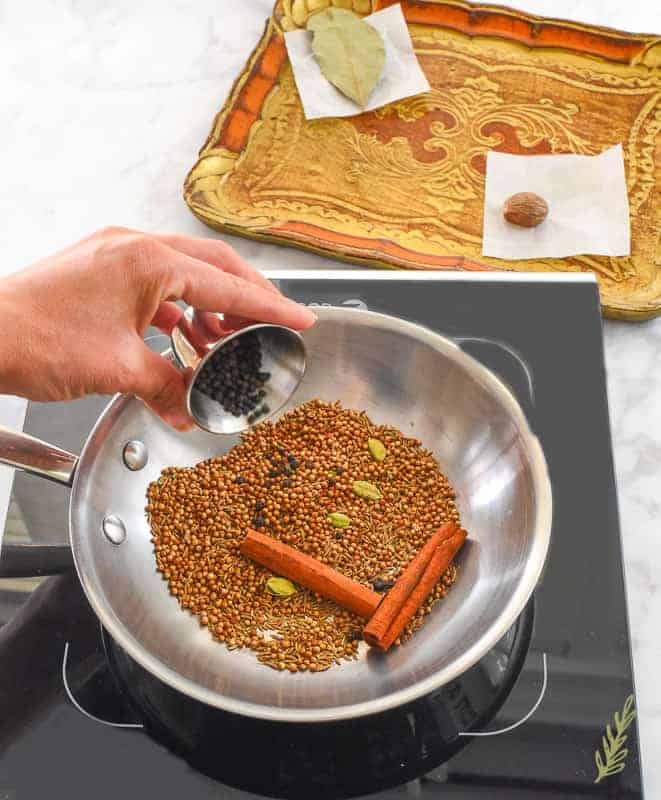 Next, black peppercorns. There are all sorts of peppercorns, did you know that? There’s pink, red, white, green, Sichuan and black. And within those broad categories are more subsets of colors and flavors. It’s mind-boggling. Even more so when you have to list all of them on a test in culinary school! Anyway, we’re using black peppercorns here. Add them to the party. 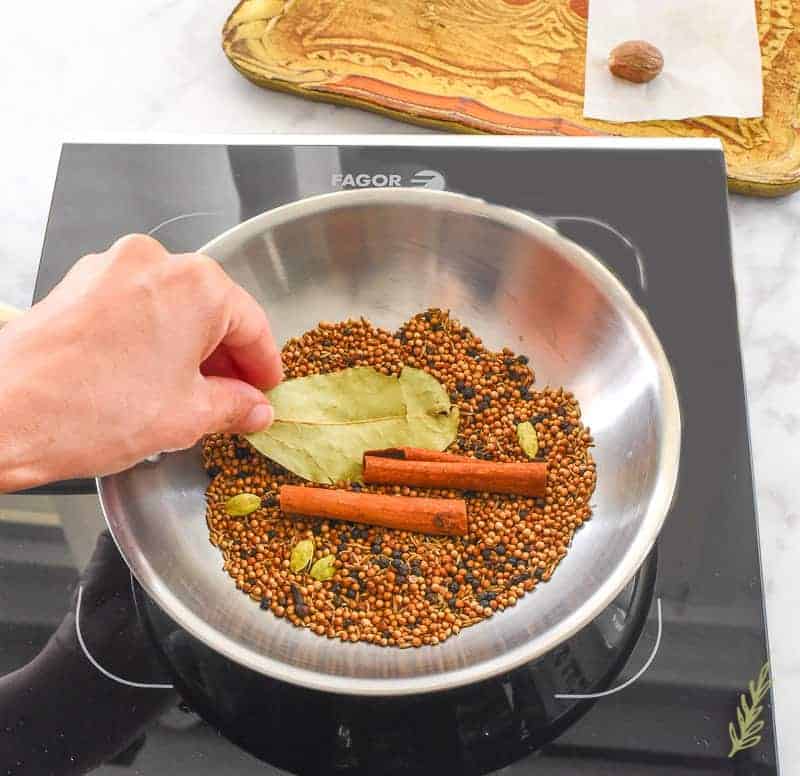 The final spice we’re adding is laurel, commonly known as bay leaf. The Greeks used it in ancient times to flavor their foods, and like the rest of our spice blend, this one is popular in Indian cooking. Pick a large leaf to add to the pan and this will complete our toasted spices. 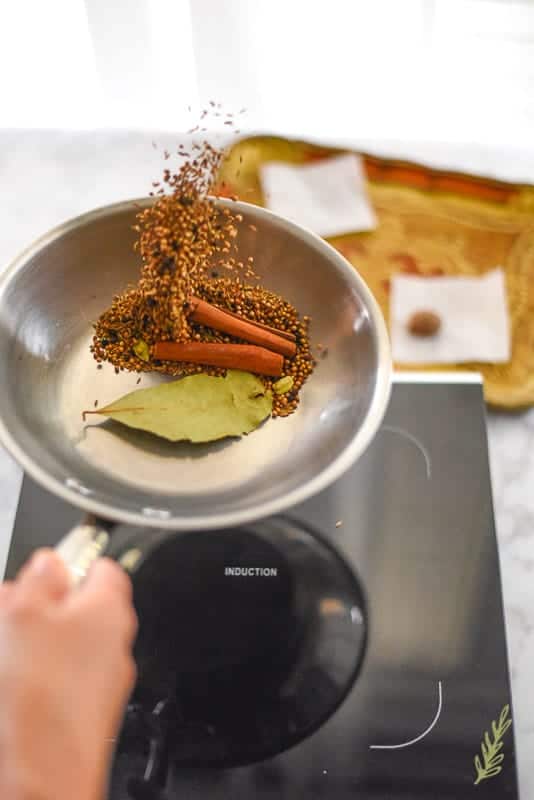 Now just give the pan a few shakes and tosses to redistribute the spices as they toast. 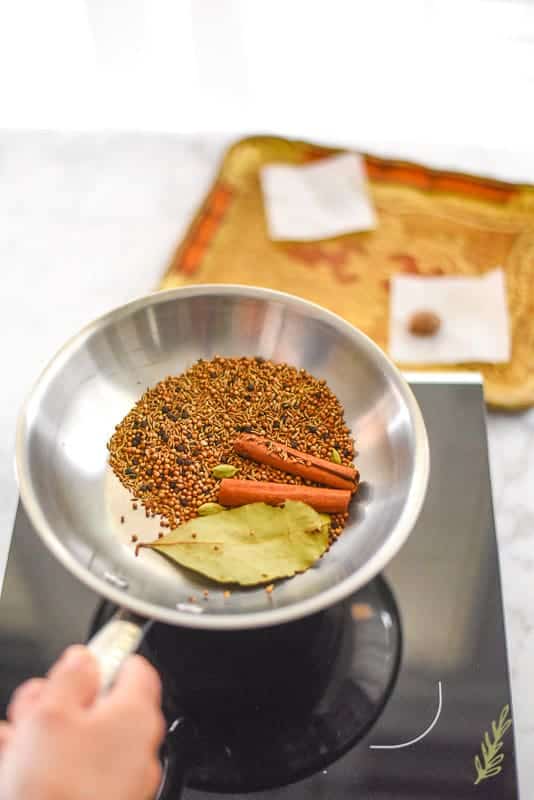 Finally, turn the heat off and allow the spices to cool for 5 minutes, or so. 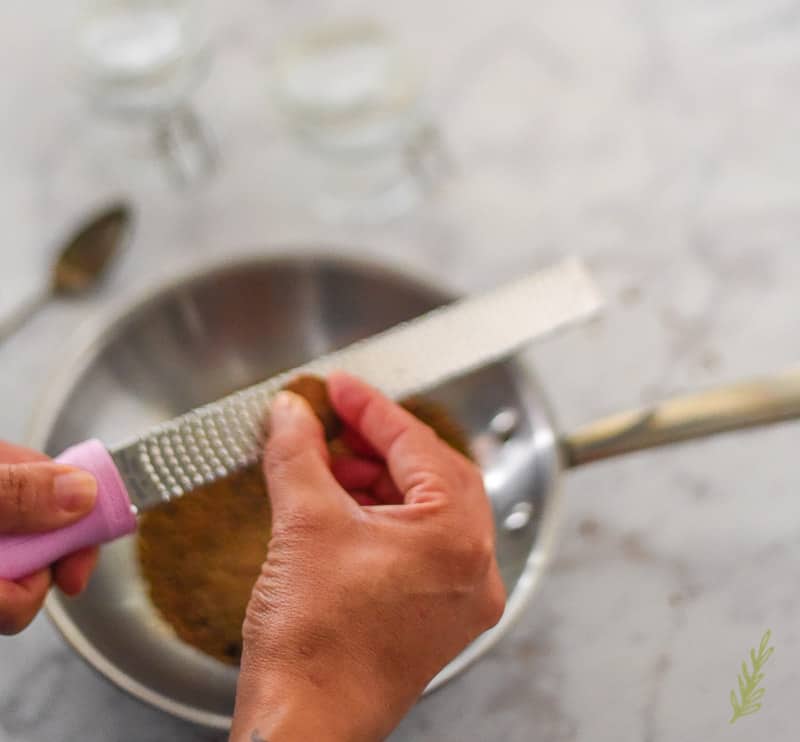 Grate the nutmeg into the pan. Since I’m not going to use the entire nutmeg seed, I don’t want to toast it along with the other spices. Toasting a spice is kind of like opening up a perfumed box. Each time you do it, you release it’s pungent flavor. You want to only toast a spice just before processing it, or cooking with it. Random useless fact about nutmeg? It’s two spices in one. Well, kinda sorta. Nutmeg is a seed that is encased in another spice: Mace. The mace is removed and dried and used in ways very similar to nutmeg. The nutmeg seed is harvested and dried and either sold whole or ground. Cool, huh? 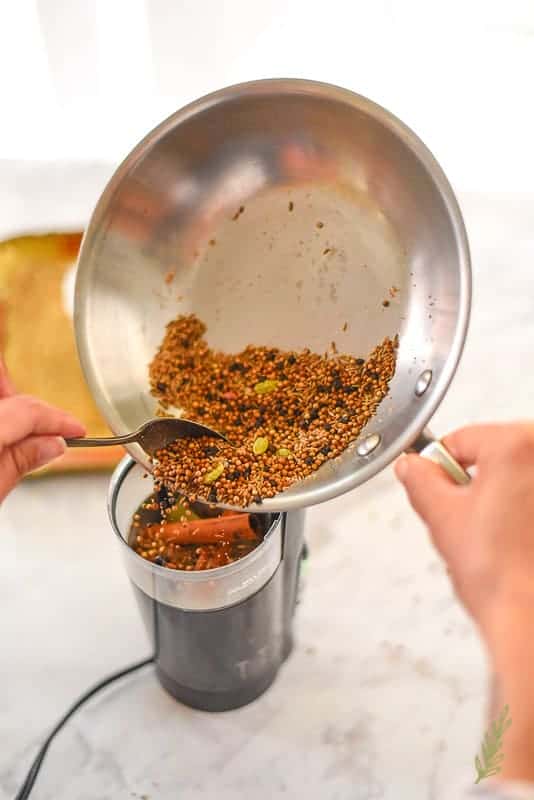 Pour your spices into your coffee grinder and… 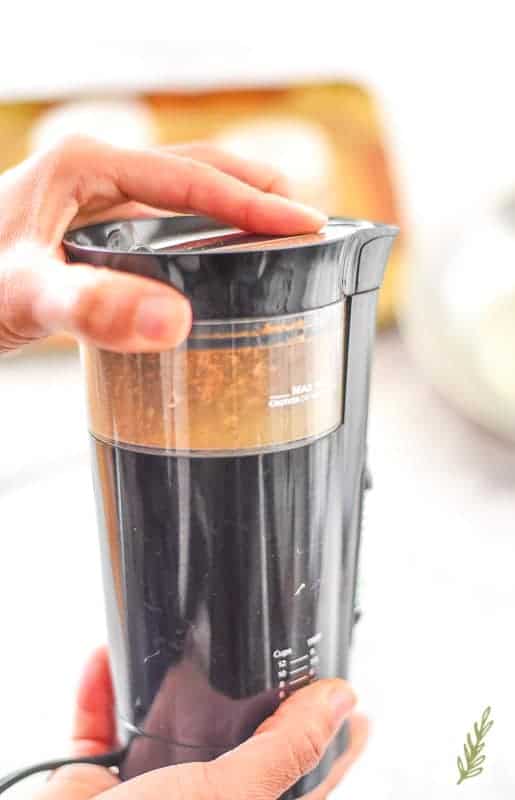 …grind for a minute. Stop grinding, stir the contents with a spoon and grind for an additional 30 seconds to make sure you don’t have any big chunks of spice remaining. Stir again to check and continue pulsing as needed. 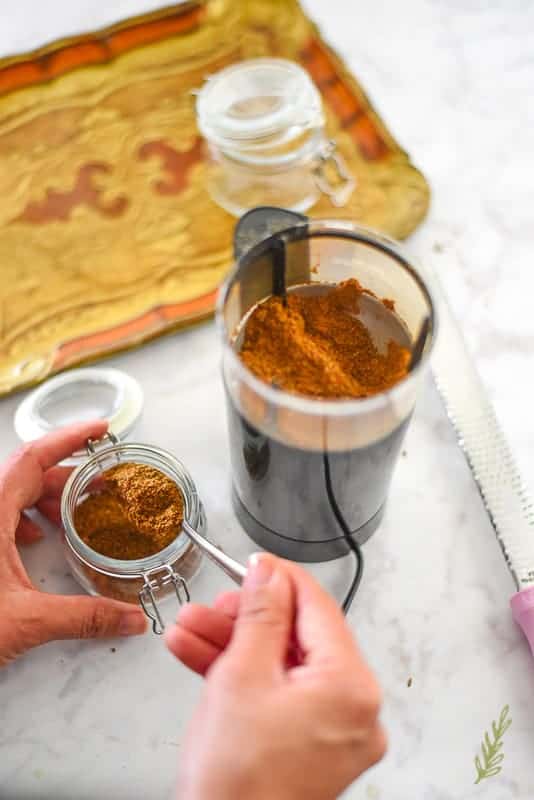 Once you have a smooth powder, transfer it into clean jar that has a tight seal. Keep this in a cool, dark place, like your pantry, for up to two months. This is an amazing gift to give alongside my cookbook, which you can pick up here. 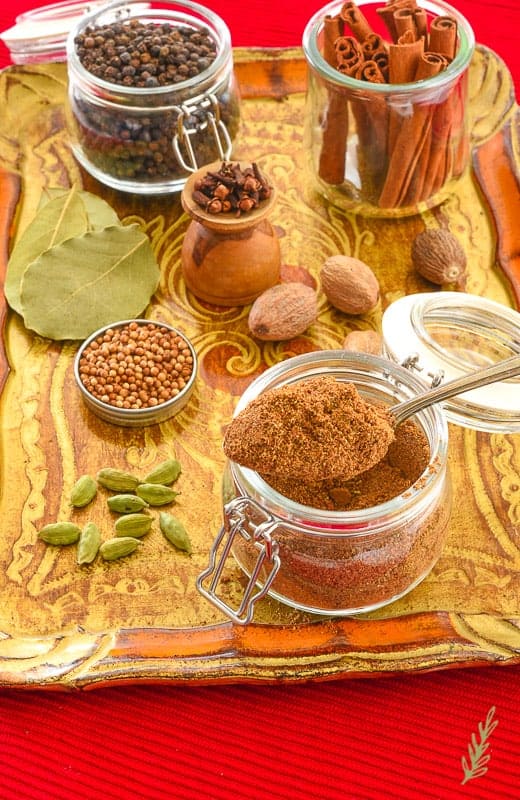 Pin this recipe and use it in your Indian cooking. It tastes amazing sprinkled on popcorn, and also on top of buttered toast. 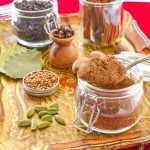 Add more, or less, of your preferred spices to customize the blend to your tastes. Use a coffee grinder to grind your spices, or if you don't have one, use ground spices instead.
Course Miscellany
Cuisine Indian
Prep Time 5 minutes
Cook Time 5 minutes
Total Time 10 minutes
Servings 1 cup
Author Marta Rivera

Check out my other blends: 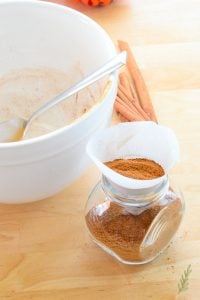 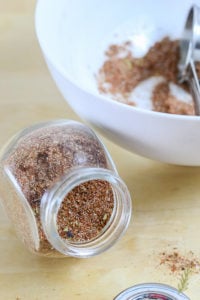 I love love love your photos! I haven’t heard of a spice blend but this is perfect!

It’s a must if you ever decide to prepare Indian food. I think you’ll love it.

This looks so delish and your photos are beautiful! thanks for sharing!

Thank you so much, Karen! Thanks for stopping by!

I’ve never heard of this spice blend, but it sounds wonderful! I bet it smells divine. Thanks for explaining that “hot” doesn’t necessarily mean “spicy.” That’s what I would’ve thought it meant.

Oh, I’m so glad I could clarify that for you, Kim! I have a few friends who have issues eating spicy food and I would hate for them to miss out.

Your photos are so beautiful and I enjoyed your instruction on spices. You made me want to run in and start cooking…and that’s saying a lot for me on a weeknight! 🙂

That brings a smile to my face, Brandi! I do hope you try it and love it!