September 15, 2020 by Marta Rivera
Add or omit spices to create your own unique blend.
Get RecipePrint Recipe
686Shares 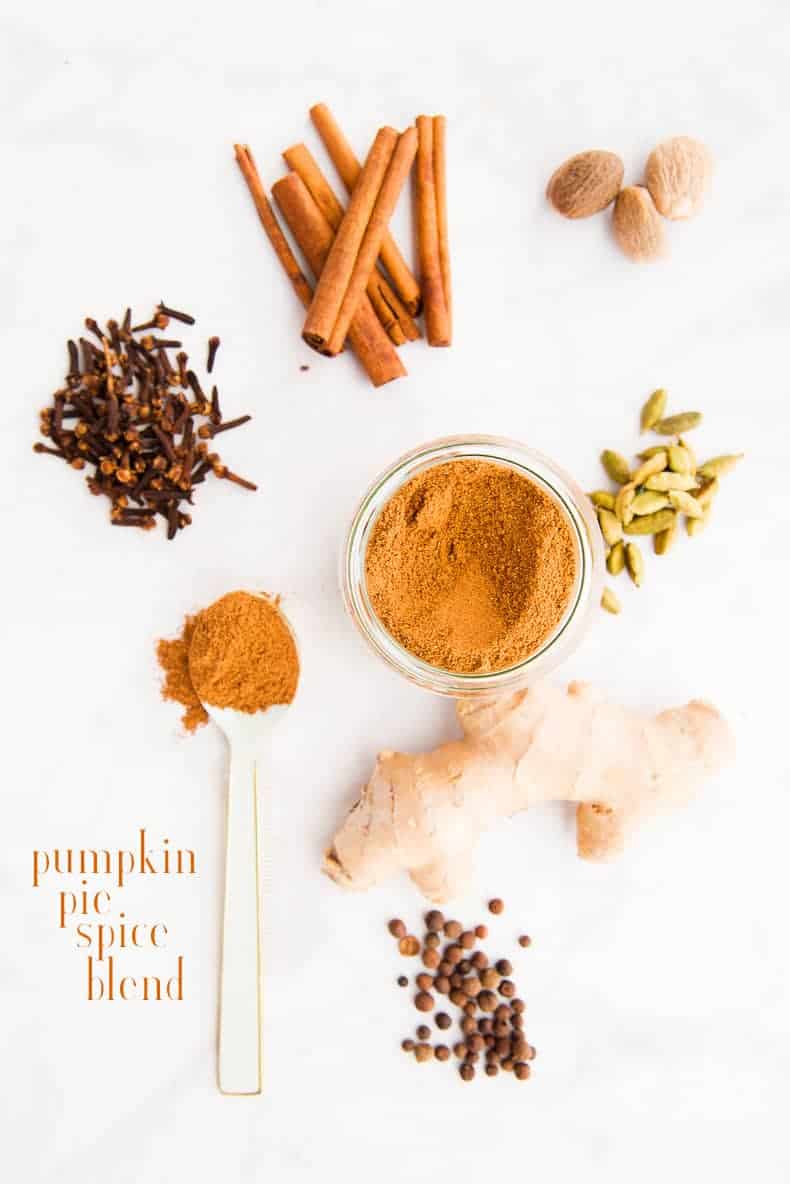 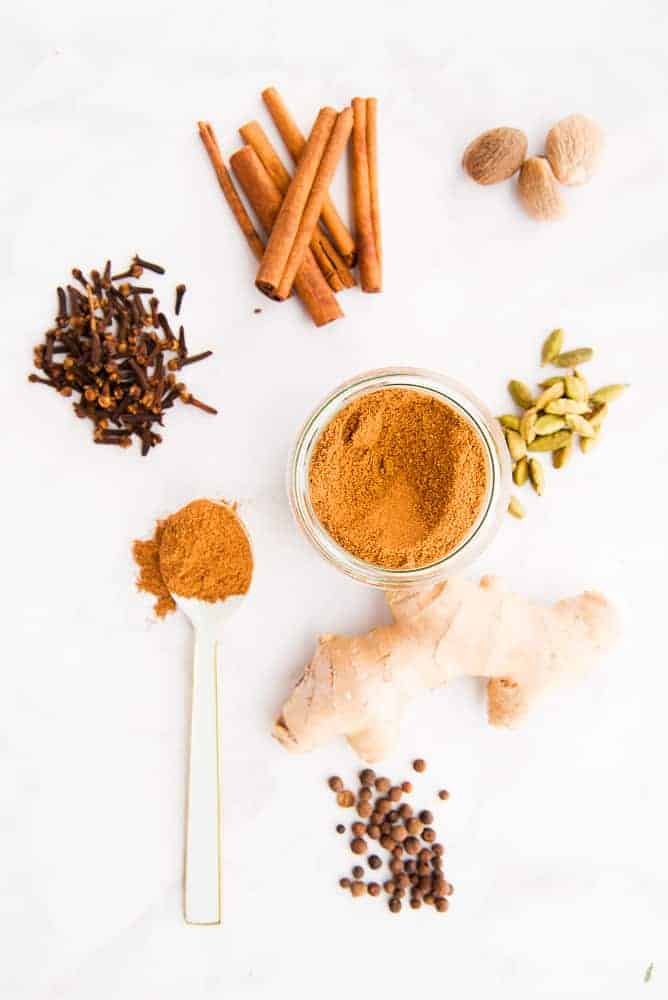 Pumpkin Pie Spice Blend made with a combination of bright, earthy spices is much better than anything you can pick up in the stores. Since I have never been a fan of paying for things I know I can make myself, I started making my own Pumpkin Pie Spice Blend at home. This year, I hadn’t gotten around to making a batch and and opted, instead, to use the pre-mixed pumpkin spice mix from the store. To say I was disappointed would be a major understatement. The store-bought stuff lacked brightness, flavor- shoot!- it lacked spice! And “spice” is in its name! I want to pass along my recipe to you so you can enjoy pumpkin pie spice correctly. This post was originally published in 2017. I’ve updated it- keeping the original recipe- to look better.

During the holidays, especially, it’s a great idea to have this Pumpkin Pie Spice Blend by the vat. Not only does it make baked goods and drinks actually taste like something special, it makes gift-giving is easy. All it takes is portioning the spice blend into some cutesie little jars and your gift list is complete. This spice blend is not only the perfect gift to give, a little bit goes so far in so many recipes. Make this Pumpkin Spice Chai Latte even quicker by replacing the whole spices with the spice blend. Pumpkin Snickerdoodle cookies?!? Yep!! They’re definitely a thing. Replace the individual spices in this recipe with your Pumpkin Pie Spice Blend.

How do I make my own Pumpkin Pie Spice? 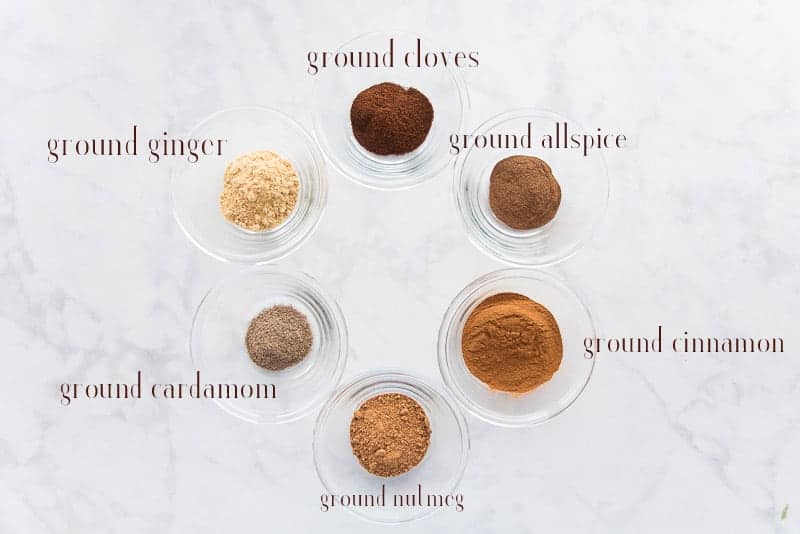 Pumpkin Pie Spice blend is just a combination of warm, earthy spices like: cinnamon, nutmeg, and cloves. It’s very forgiving in that if you absolutely loathe one of the spices, you can substitute it. The only exception to that forgiveness is the cinnamon, and, that, because it’s the foundation spice; but, besides the cinnamon all of the others are optional. I do suggest using the ginger, nutmeg and cloves though, because, really, if you’re a legit PS lover, you should like them anyway. Because the bulk of flavor will come from the ground cinnamon, choose a quality one.

What spices are in Pumpkin Pie Spice Blend? 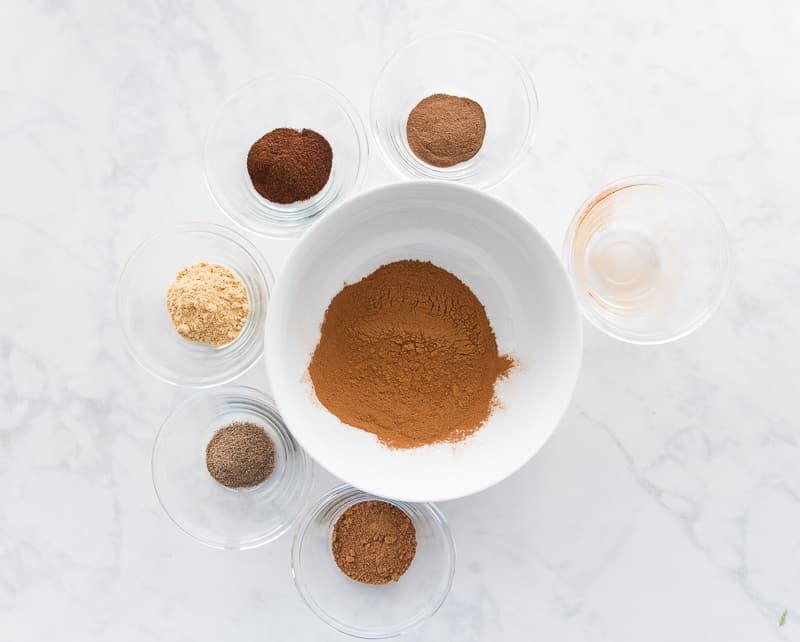 As I mentioned repeatedly, cinnamon makes up the bulk of the Pumpkin Pie Spice Blend.

In case you weren’t aware, cinnamon comes from the bark of a tree. Once the wet bark has been loosened, it is planed into long rolls, or quills. Those quills are what we bring home from the local supermarket in bottles labeled: cinnamon sticks. Chinese or Ceylon cinnamons are the most common and easily used because they’re softer. The Ceylon variety is more accessible for those of us in the States. If you have a gourmet market nearby, by all means, experiment with different varieties. Begin to build your spice blend by adding the cinnamon to a medium-size mixing bowl. 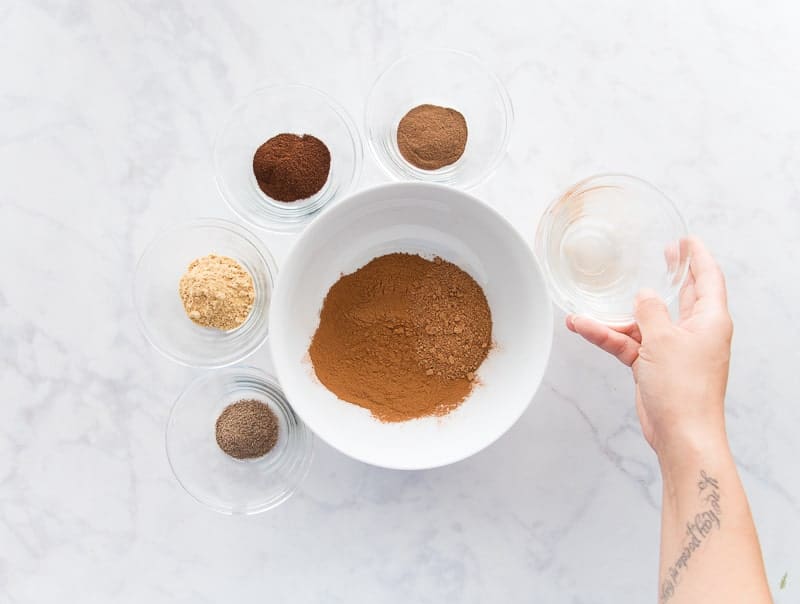 Follow that with your ground nutmeg. Now, nutmeg is a special spice because it actually is a twofer. Mace, the aril that surrounds the nutmeg seed is the milder of the two. The stronger, pungent nutmeg seed is what we’re using here, though. You can either buy yours pre-ground, or use a microplane to grate your nutmeg seed fresh. Pour that into your bowl with the cinnamon. 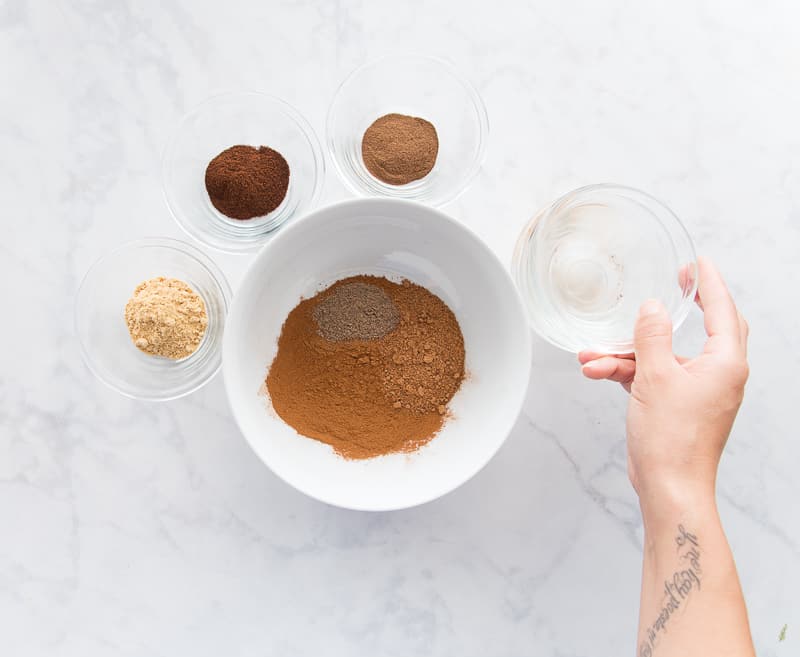 Cardamom is not traditionally used in the pumpkin spice blends that are sold in stores. But, that’s why our blend is so much better than the store-bought stuff. Cardamom is native to India and is also the third-most expensive spice in the world. Cardamom has a warm, almost resinous, flavor that goes well in many baked goods- especially those with berries. That said, in recipes that usually call for pumpkin pie spice, the cardamom acts a brightener for the other spices in the blend. 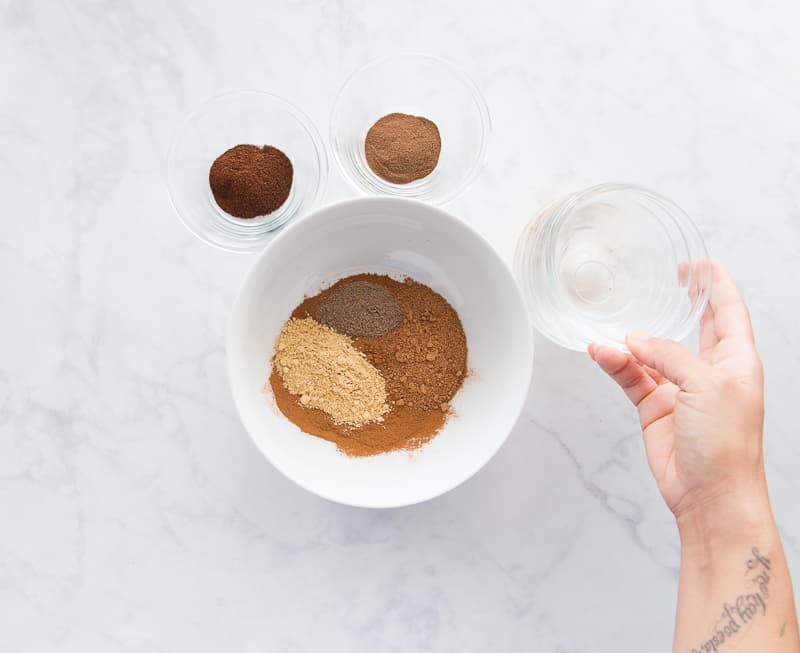 Ginger is a pretty spice. Well, it’s actually a root, but it’s spicy here. It smells so fragrant and exotic that any Pumpkin Spice blend without it is just not as vibrant. Ginger comes from Southeast Asia and is used both as an ingredient in recipes and as a medicinal root. Even dried ginger root is extremely fragrant and almost spicy in flavor.

Using smoked ginger in my Pumpkin Spice blend changed my life, y’all. Not really, but it made me really happy on the insides. You don’t have to use the earthier, smoked ginger, use whatever is accessible, or what you prefer. Add the dried ginger to the bowl along with the cardamom, nutmeg, and cinnamon. 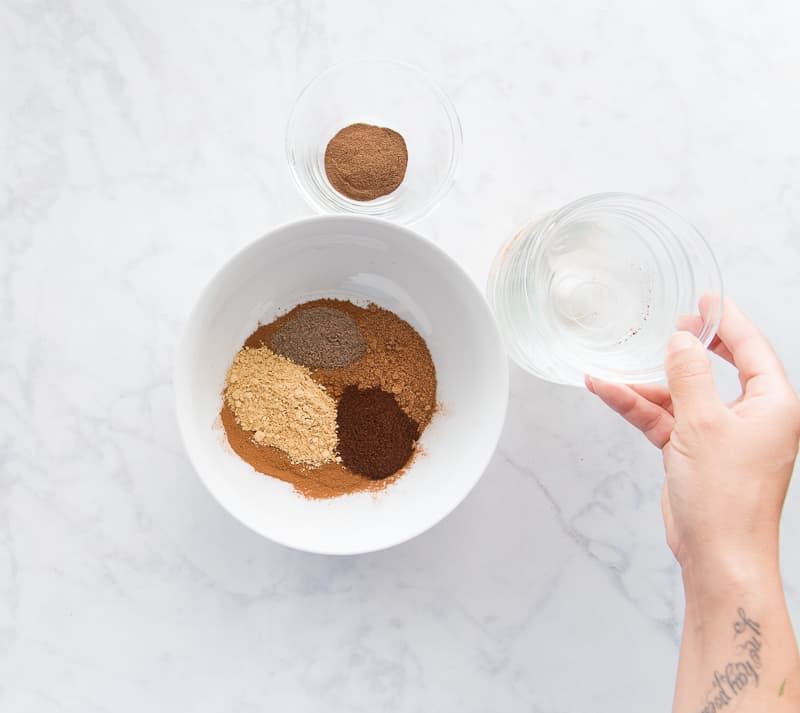 Now for the cloves. Normally, I’m not a fan of the spiky-looking spice, but in Pumpkin Pie Spice blends it works perfectly. Cloves, to me, have an overwhelming pine-resin flavor that just bugs me.

In my family ham, studded with cloves, pineapple, and maraschino cherries and is popular. I hate it. With a passion, hate it. I add it here, but only because it is balanced perfectly with the other ingredients. So, even if you have an irrational dislike for cloves, you should still add it, because it will balance the rest of the spice blend. 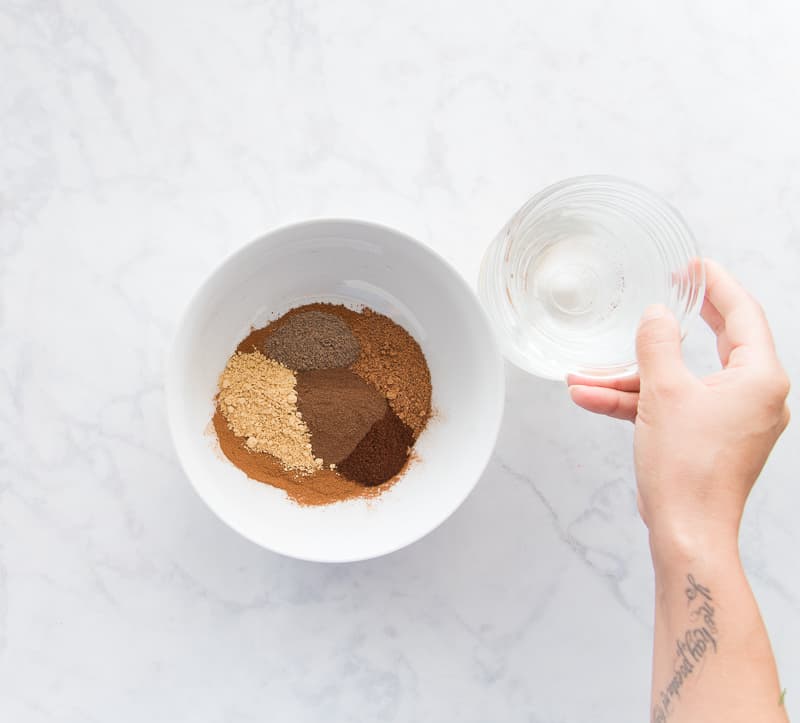 Allspice is actually a very popular spice in the Caribbean. That jerk chicken you love so much? Yep, that’s allspice you taste! Oddly enough, Cincinnati-style chili also has allspice. Ground allspice is great on chicken and turkey, as well as fish.

For now, we’re using this tiny berry to give our Pumpkin Spice blend a mild peppery kick (trust me on this). 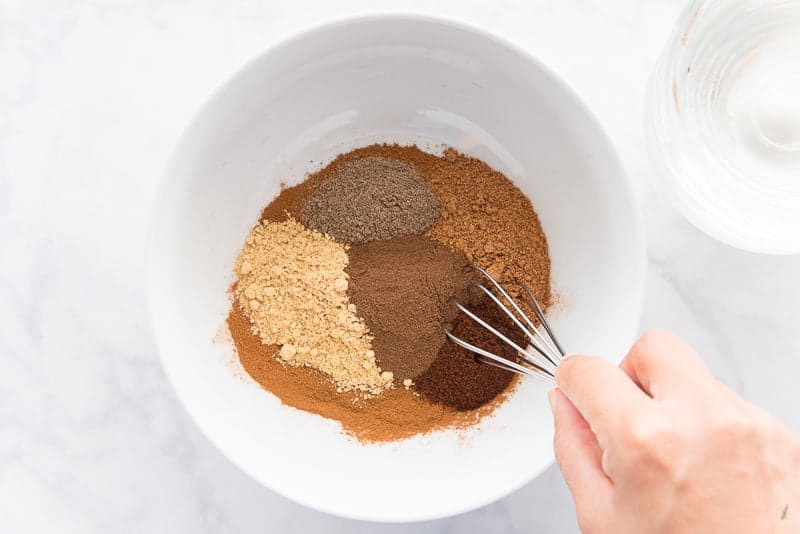 After you add the spices to the mixing bowl you only need to whisk them until combined. That’s all it takes to create your very own pumpkin spice blend.

This is why I’m such a huge fan of making and keeping a batch on hand throughout the year! 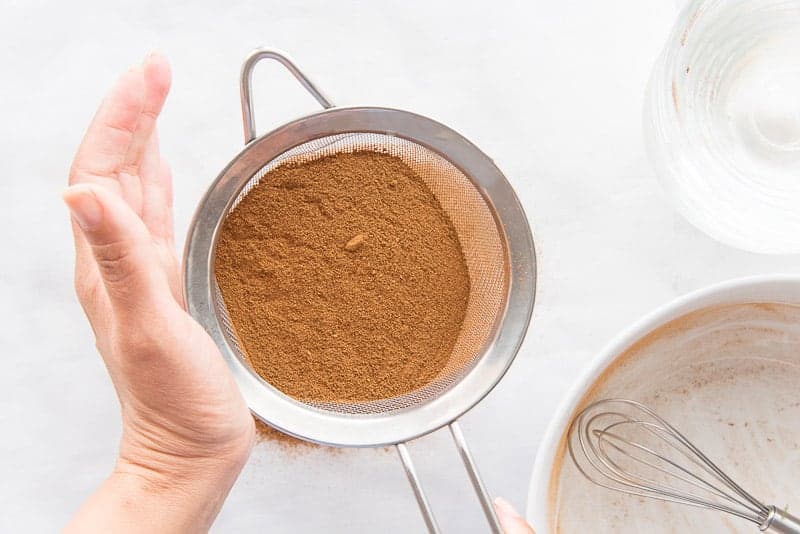 I go one step further in the mixing process. In order to eliminate large clumps of spices, I sift the pumpkin pie spice blend two or three times prior to jarring it. This way, I’m ensuring that the blend really is blended before I use it in recipes. Wouldn’t that be horrid to get a teaspoon full of cloves, instead of pumpkin pie spice? For me, that’s a nightmare.

How do I store Pumpkin Pie Spice? 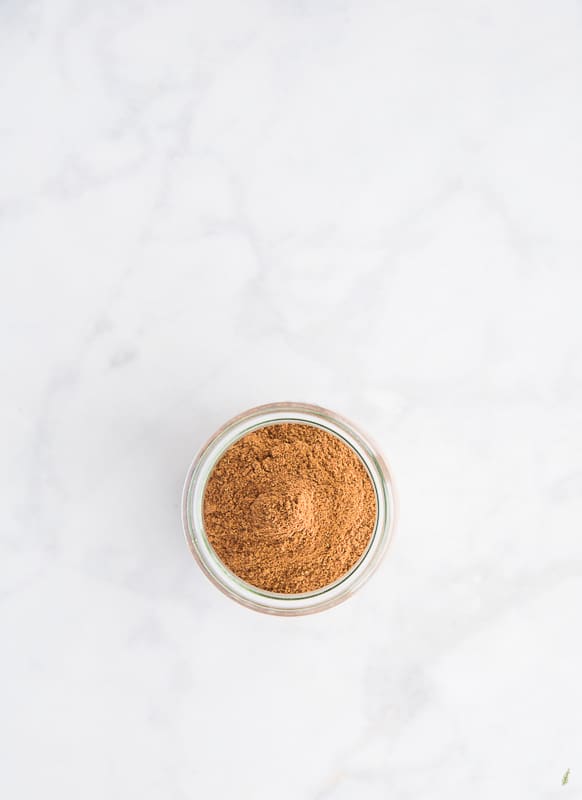 Create a little funnel with some stiff parchment paper or use a small plastic funnel to fill your jars. Seal the jar with a tight-fitting lid and store it in the pantry.

Whatever you do, don’t store your pumpkin pie spice over, or next to, the stove. The temperature and moisture in those cabinets fluctuates so much whenever you cook that you lower the spice blend’s shelf-life by storing it there. Light also doesn’t do much for your spices, so a cool, dark cabinet away from the stove is the best bet.

How long can I keep Pumpkin Pie Spice? 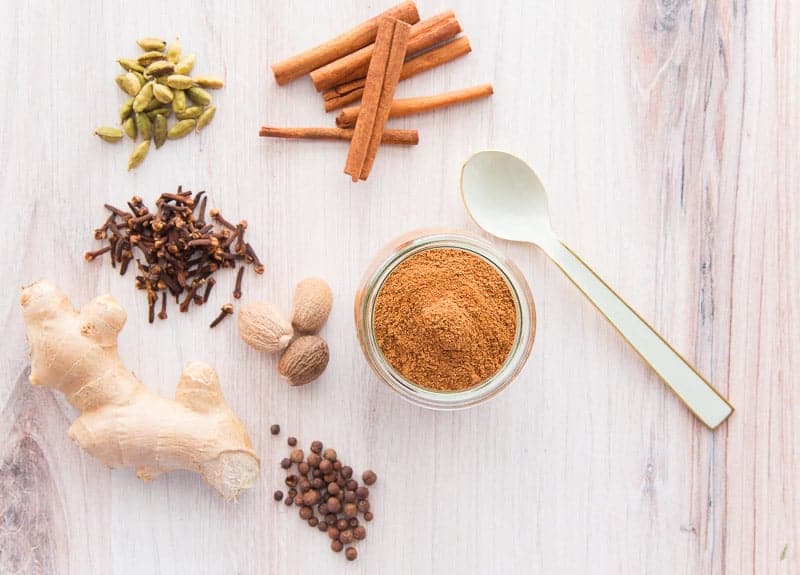 Be sure to write the date the spice blend was made and attach it to the jar you’re going to keep it in.

Most spice mixtures will keep in a cool, dark pantry for 6 months to 1 year. Mine never last that long, but that’s the standard rule for spices.

What recipes can I use Pumpkin Pie Spice in?

A teaspoon of this pumpkin pie spice blend will transform your pancakes, waffles, or muffins into something autumnal and delicious. Brew a warm mug of tea with a pinch of this spice blend and you’re walking through a leaf-changing forest of trees. Add this pumpkin pie spice to your mashed sweet potatoes, even! The possibilities are endless, but here are some of the recipes I love to use this blend in:

What recipe do you plan to use your Pumpkin Pie Spice Blend in? Don’t forget to pin this recipe to your Fall Recipe Boards and share with your friends and family! 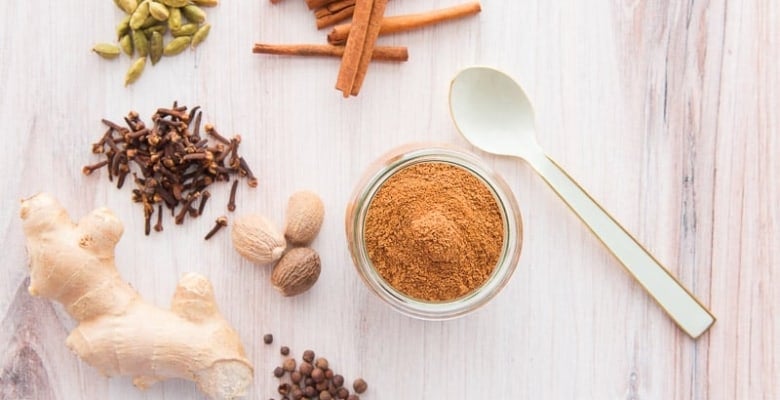 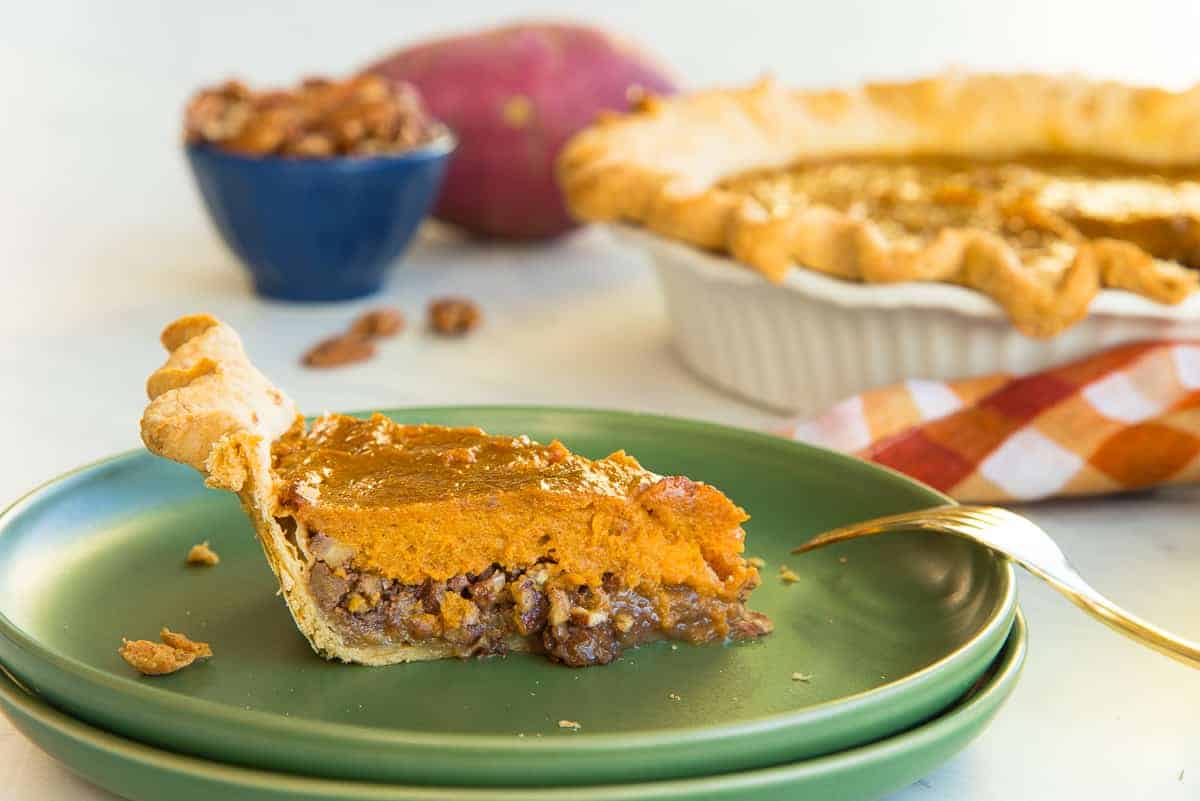 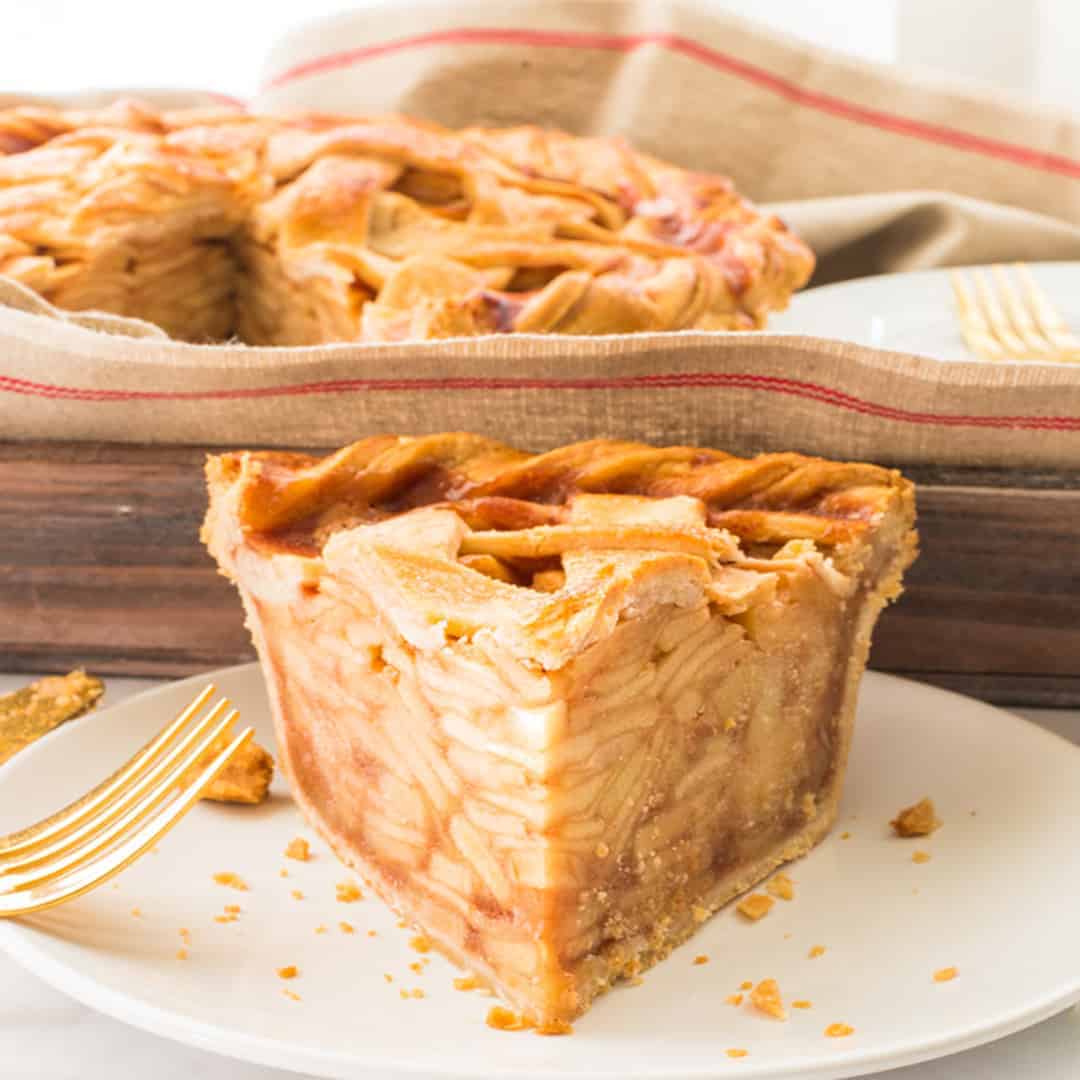 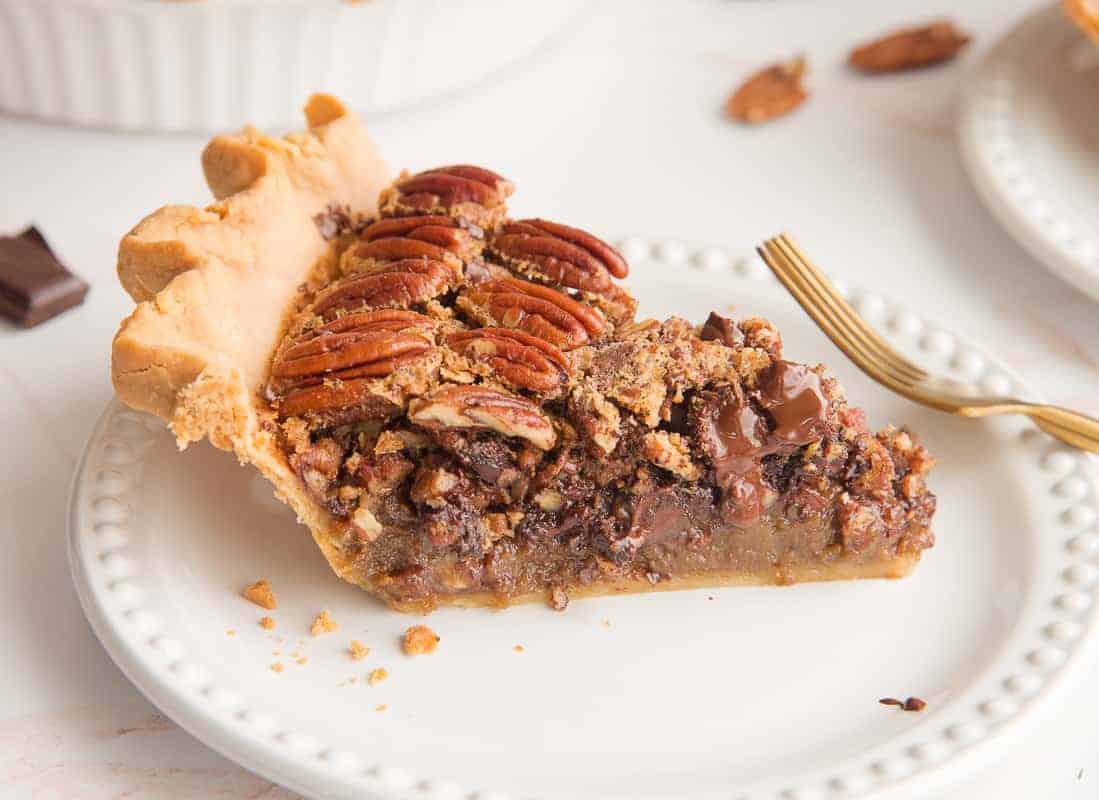 This spice blend will be part of our spice collection from now on. Very nice indeed.

I have everything except the cardamom. I can’t wait to make this to use in a cocktail soon. Thanks for the amazing recipe!

I really couldn’t believe how easy this was to make…until I made it. Tastes better than the store mix, honestly. I won’t be going back!

I’m so glad to hear that, Jazz!

This is the most fragrant spice blend I’ve ever made. I love that you added cardamom and allspice for added flavor, it truly elevated the blend and made this a spice blend that I will be making for eternity!!

Those two are so underrated. I had to include them, for sure.

I was in the middle of baking some cookies and couldn’t find the pumpkin spice seasoning that I SWORE I had! This recipe definitely came in clutch! It was definitely better than store bought!

So glad it helped out!