May 28, 2020 by Marta Rivera
This is the Italian version of a French Provincial dish.
Get Recipe
503Shares 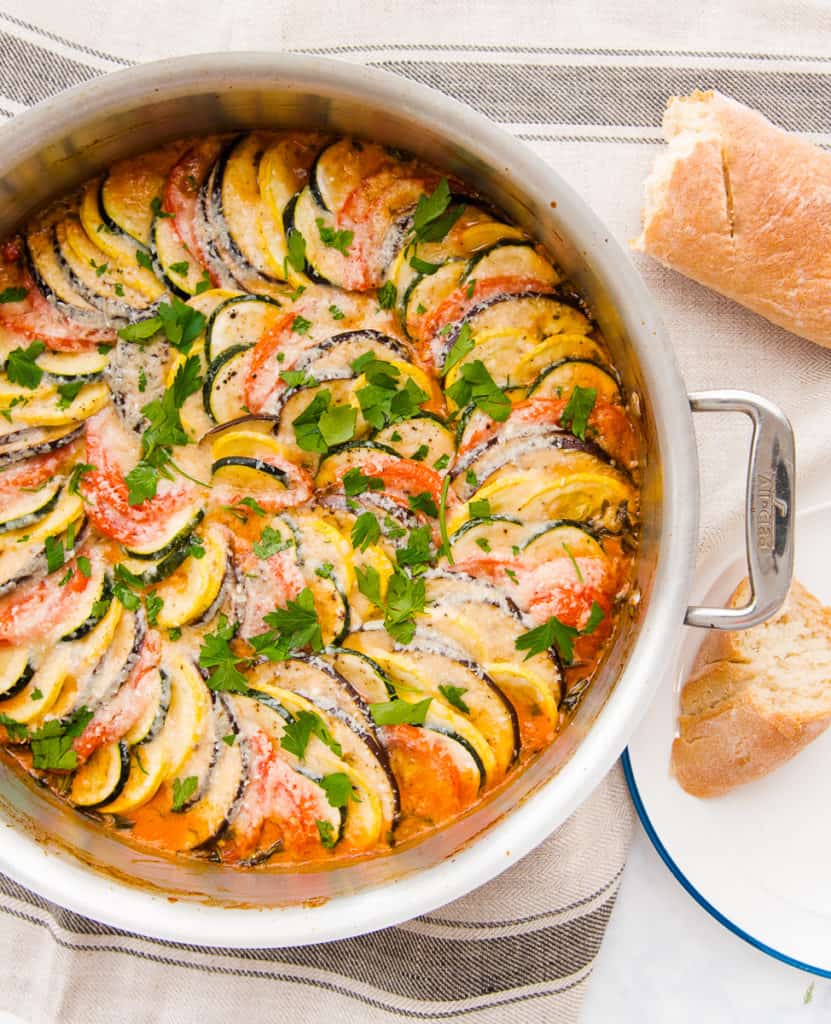 Ratatouille is considered peasant food in France. If this is what peasants eat, though, I’m good with not being rich. My Italian Ratatouille nestles a combination of summer squashes and tomatoes on a lake of creamy tomato sauce. A liberal amount of pecorino cheese is doused on towards the end of baking, then it’s served with a loaf of crusty bread. It is completely meatless. And, yet, I’ve never been able to finish a serving. Because it’s so filling, serve this as a meatless dinner or a hearty lunch.

What Is (Italian) Ratatouille?

First and foremost, I want to clarify that Italian Ratatouille may not exist anywhere but on this blog. That’s a good thing for me, but I don’t want anyone coming for me in the comments about it. It is not a classic dish. Italian ratatouille is a riff on the classic ratatouille.

Now, ratatouille is a real dish. In the past, ratatouille was just a vegetable stew: its name derived from the word meaning “to stir up”. The stew originated in Provence, France, as a popular meal among the working class. In recent history it took on the form you see today: a stew comprised of eggplant, zucchini, squash, and tomatoes.

Purists believe that each of the veggies in the dish must be cooked separately before being combined. Others, like me, are cool with cooking everything together. The traditional way to prepare ratatouille is to chop the veggies and stew them together. I’m not traditional. And, as I mentioned earlier, this dish isn’t either. Besides the way the veggies are arranged in my recipe, the biggest difference is the sauce they are bedded in. Herbaceous, creamy, and rich, the tomato sauce is mellowed out by mascarpone cheese. This sauce is what makes this an Italian ratatouille. 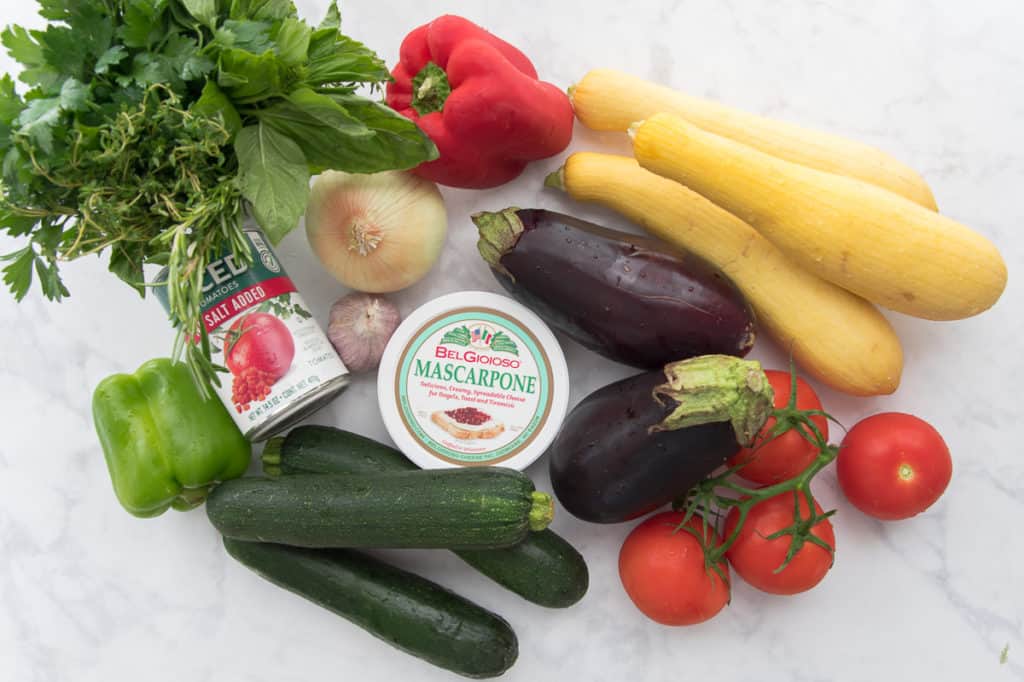 Because this recipe is heavy on veggies, I want you to buy the freshest ones you can get your hands on. You need yellow summer squash, eggplant, zucchini, and vine-ripened (or heirloom) tomatoes. For the tomato sauce: onion, red and green bell peppers, garlic, parsley, basil, thyme, and rosemary, a can of petite diced tomatoes, tomato sauce, dried oregano, salt, pepper, and mascarpone cheese. A generous cup of shredded pecorino-romano or parmesan cheese is the pièce de résistance.

The Importance of Being Consistent 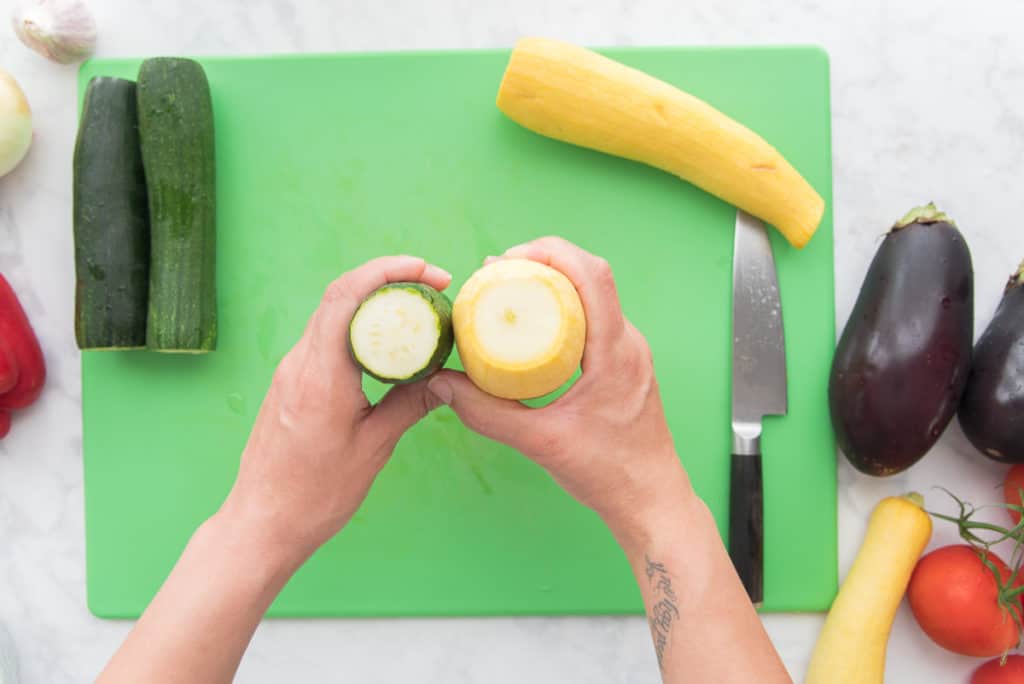 When it comes to cutting the vegetables for this ratatouille, consistency is king. Take a look at the differences in girth between the zucchini and the yellow squash I’m holding. Their sizes alone show that both need to cook different lengths of time. A super-thick slice of the larger yellow squash laid next to a paper-thin slice of the smaller zucchini, will result in your dish cooking unevenly. Some will be crunchy and undercooked, the others will be mushy. A happy medium in your dish is what you want to strive for, which happens with precise, consistent cuts.

Grab a large cutting board and your chef’s knife or mandoline. Because a mandoline requires a set-up, I tend to avoid using it. If you know you’re going to have a difficult time with cutting precise slices, go ahead and use your mandoline. However, for me, a knife works just fine. 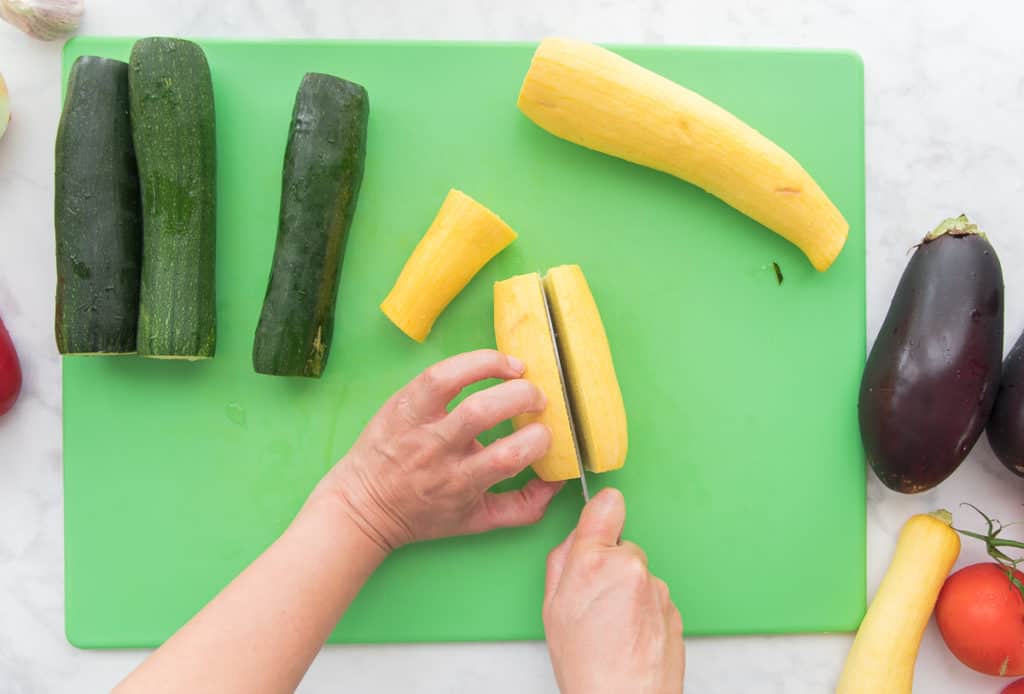 To level the veggie playing field, I cut the yellow squash down its length ’til it’s roughly the same size as my zucchini. I do the same with my eggplant and tomatoes: I cut them in half lengthwise. 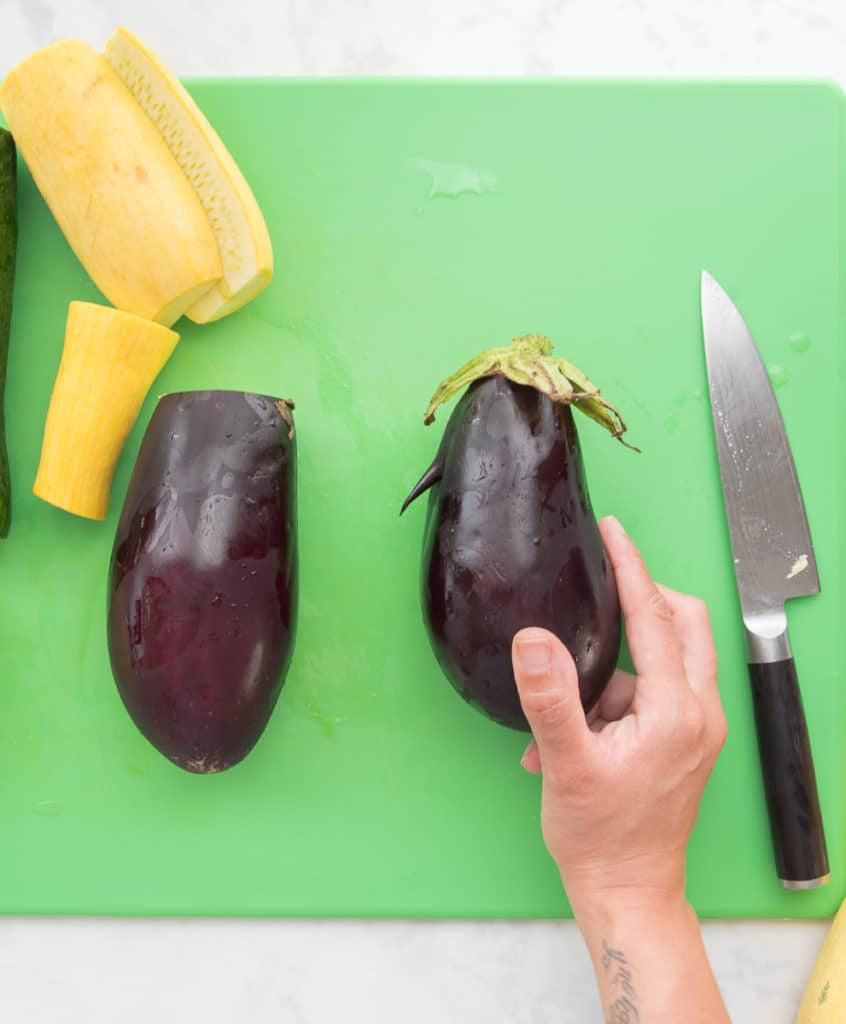 Check out the funky arm growing on my eggplant!! 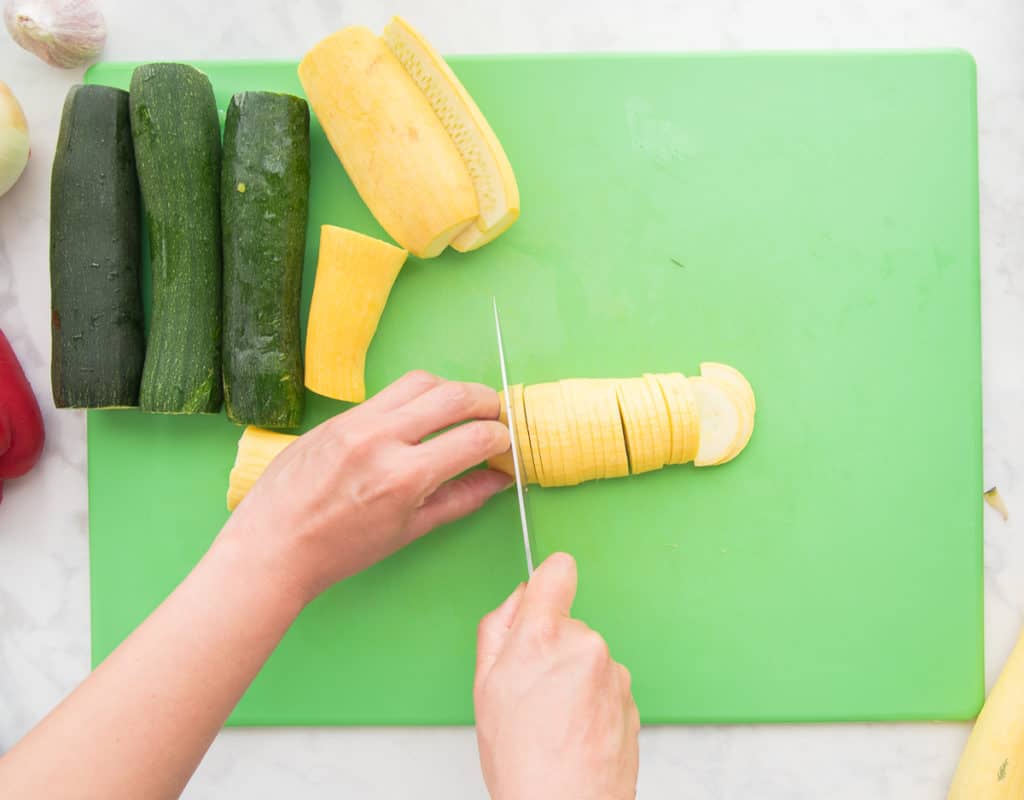 After the larger veggies are sliced in half, I slice them a 1/4″ thick. The whole zucchini I slice into 1/4″ thick rounds.

Set all of the veg aside and mince your onion, bell peppers, and garlic. Place these into a separate bowl for now.

Go heavy on the herbs! 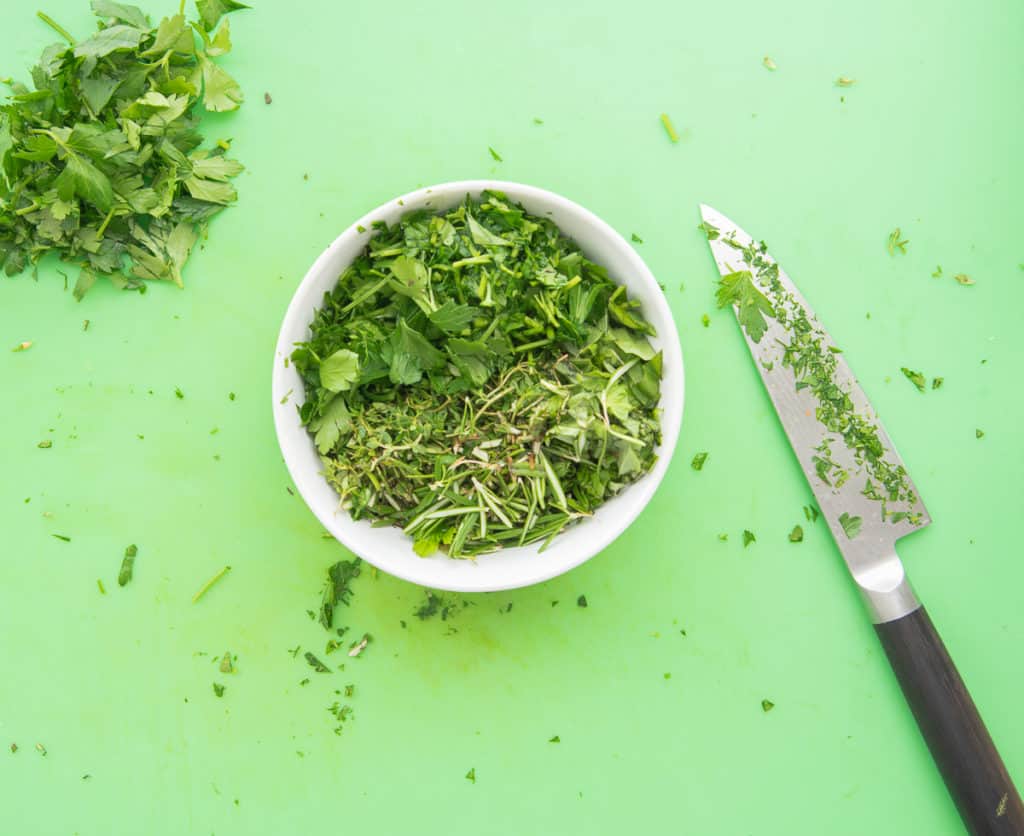 The bulk of flavor in this recipe comes from the herbs. Lots of herbs as you can see. After removing the stems, roughly chop fresh basil, rosemary, and parsley. Set aside a big pinch of the parsley for garnishing the finished ratatouille. The thyme leaves you can simply pull from their stems. No need to chop them since they’re really small.

Build the flavors of your Italian Ratatouille 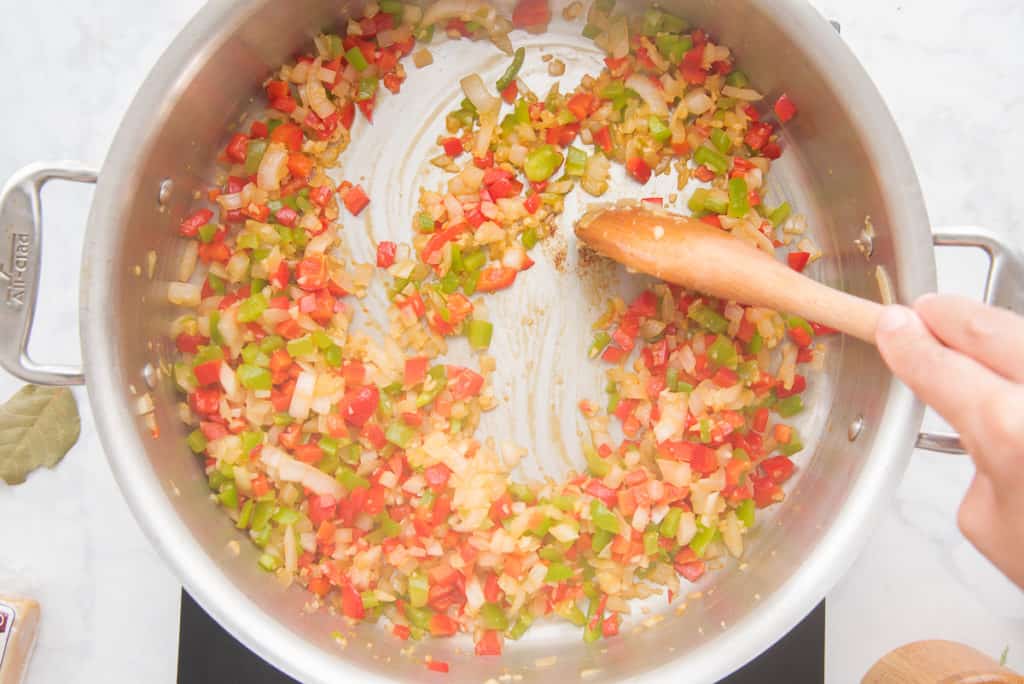 Amazing stews are the result of layers of flavors that build up to crescendo. This isn’t a single, my friend. It’s an album. You probably have no idea what either of those things are referencing, and that’s because, unlike me, you’re not a dinosaur. So, just google it, or something.

Because this is going to be a one-pot dish- meaning we’re going to sauté and bake it in the same dish- you need a large brasier.

Heat the olive oil over medium-high heat. When the oil begins to shimmer in the pan, add the onions, bell peppers, and the garlic. Cook these aromatics, stirring frequently, until they begin to break down and caramelize in the pan. After about 10 minutes of sauteing, they will begin to leave brown streaks in the pan. That’s their sugars being cooked, or caramelized. 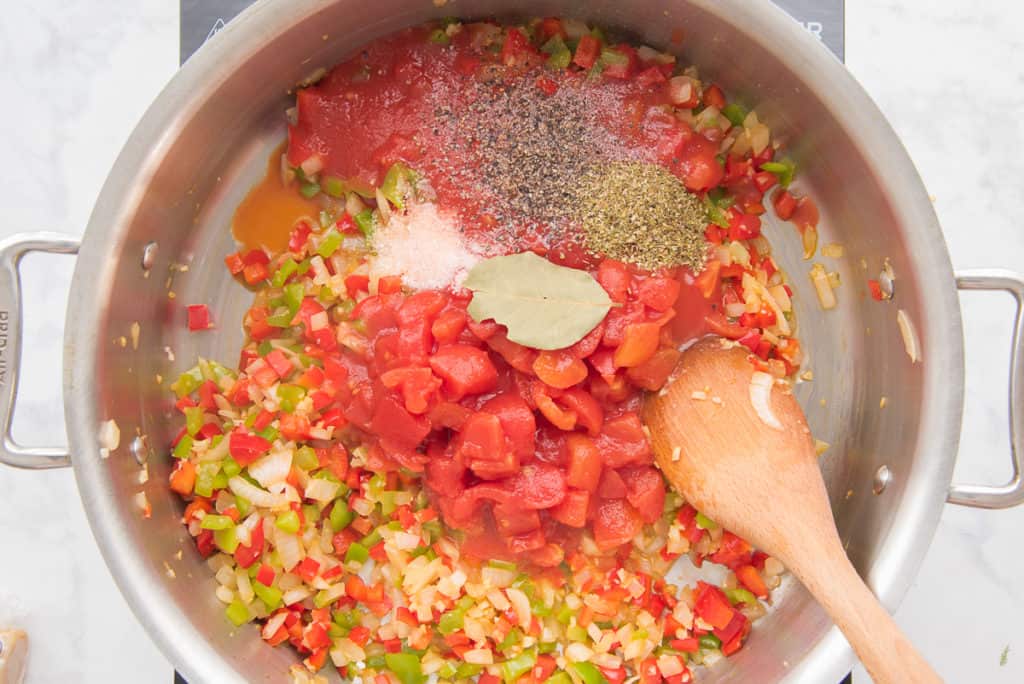 Decrease the heat to medium, then stir the canned tomatoes, tomato sauce, salt, pepper, and dried oregano into the caramelized vegetables in the pan. Add the bay leaf, as well.

Bring the mixture up to a gentle simmer, stirring occasionally to prevent the contents from sticking. Allow the sauce to simmer for 10 minutes.

Key to finishing the mascarpone sauce 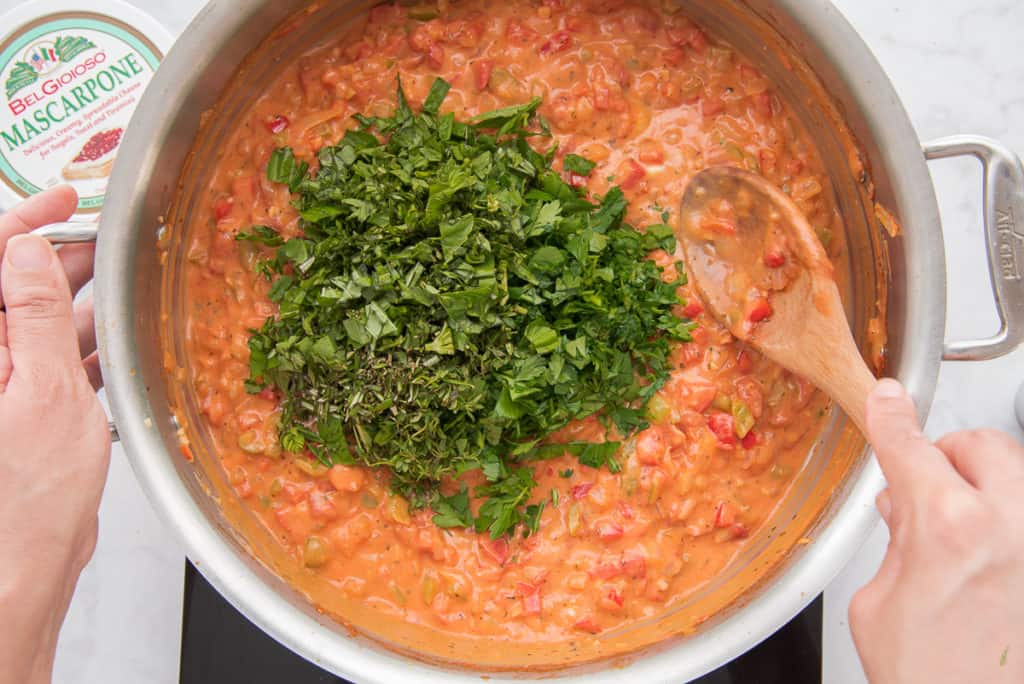 After 5-10 minutes, the veggies will have released their juice and most of it will have evaporated. What’s left is a thickened sauce which is the consistency of ketchup or pasta sauce. Because the veggies that we’re going to lay on top the sauce have water in them, we want the sauce to be pretty thick. That way, after everything has baked together, the sauce will be the perfect consistency.

After the sauce has thickened, turn the heat off and stir in the mascarpone cheese. I prefer BelGioioso, but whatever brand you can get is fine. Once the cheese is melted, add the herbs to the sauce. Because the cheese and herbs are sensitive to high temps, you want to add them off the heat. That’s the key to creating a smooth, uncurdled tomato sauce. The herbs are most potent when they are uncooked. But, since we still have yet to cook them, adding them at the last minute (before baking) is the best way to maintain their flavor.

Layer the veggies on the sauce 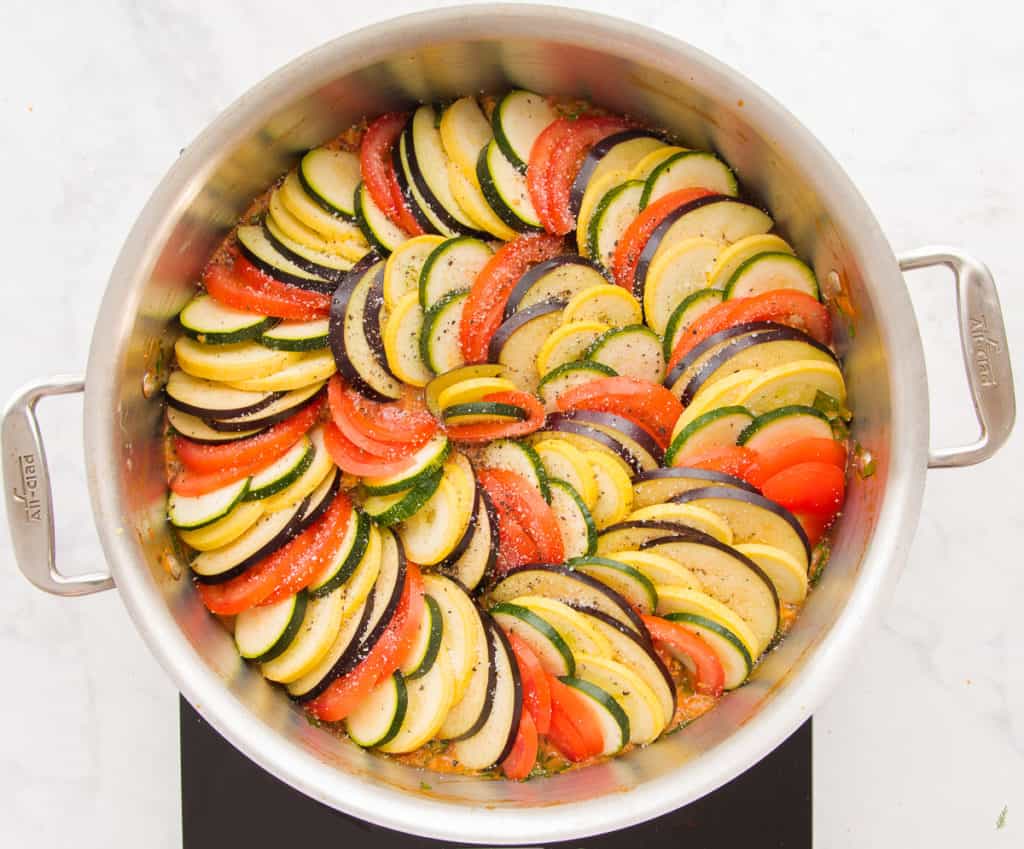 I layer my veggies like it was done in the Pixar movie Ratatouille because I have children who are obsessed with the film. While you don’t have to arrange your veggies like mine, it doesn’t hurt the eyes to do so. Now, does it?

However you decide to layer your veggies, it needs to be done uniformly. Lobbing them into the pan won’t work because then they won’t cook evenly. Layer the veg in an even layer on top of the sauce you just made. If you look closely, you can see that I layered them two at a time: two slices of eggplant, two zucchini, two squash, and two tomatoes. Additionally, I overlapped each pair of veggies slightly. I, personally, think it’s simply beautiful.

Season the top of the veggies with salt and pepper and cover the pan with a lid or tightly wrap the top of the pan in aluminum foil. Bake the Italian ratatouille in a 400°F oven for 20 minutes.

After 20 minutes, remove the pan from the oven and uncover it. Return the pan to the oven and bake for another 20-25 minutes, or until the veggies are soft. 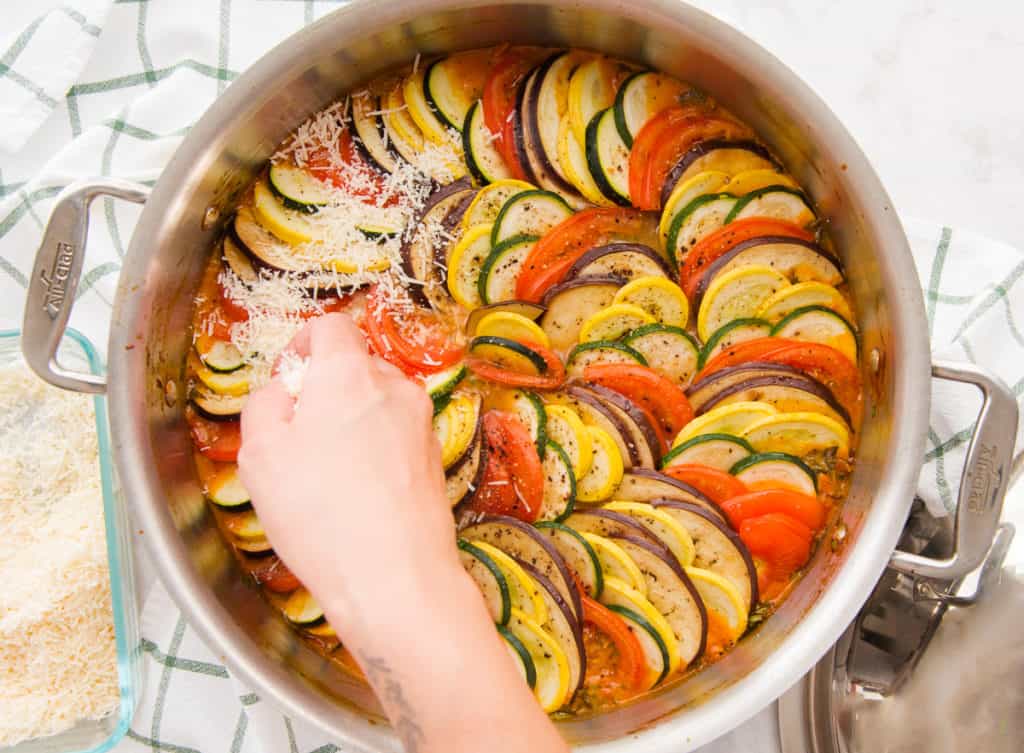 Once the ratatouille has browned a bit on the surface, remove it from the oven. Sprinkle the cheese on top and return the pan to the oven for 5 minutes. At this point, you can turn the oven off and let the residual heat melt that cheese.

Garnish the ratatouille with a hefty pinch of fresh parsley and rally the troops. 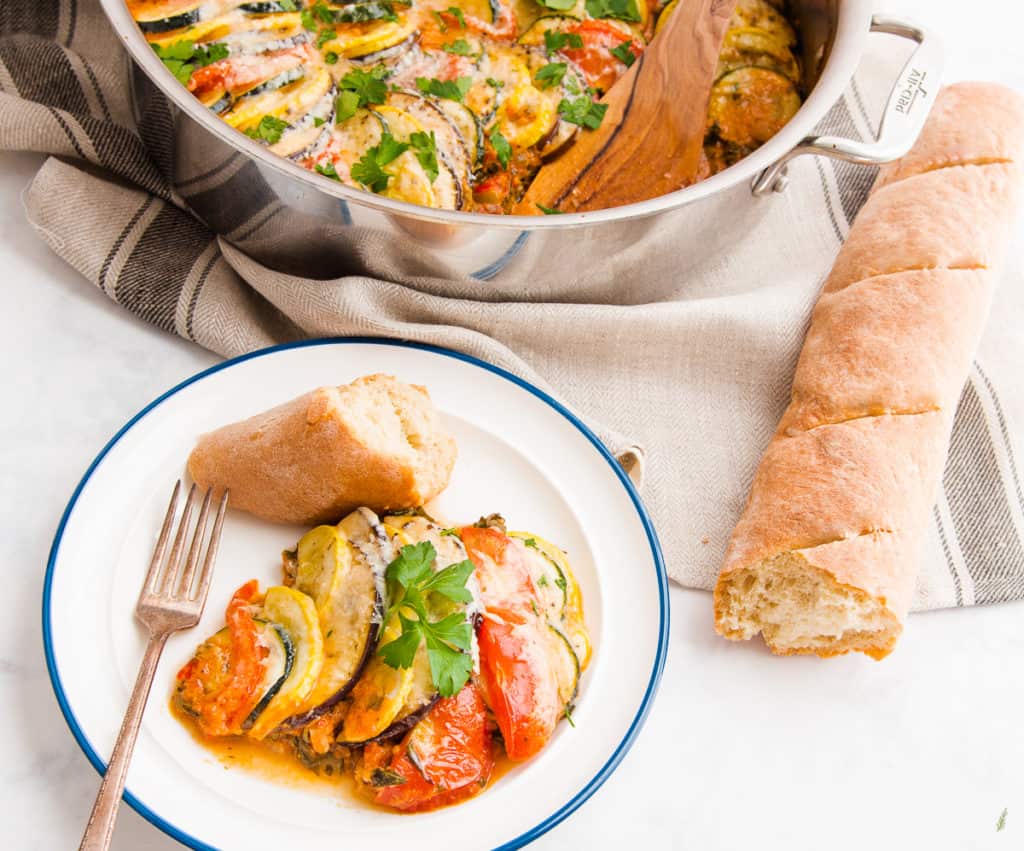 The best way to serve this Italian ratatouille is with a couple of slices of crusty bread. 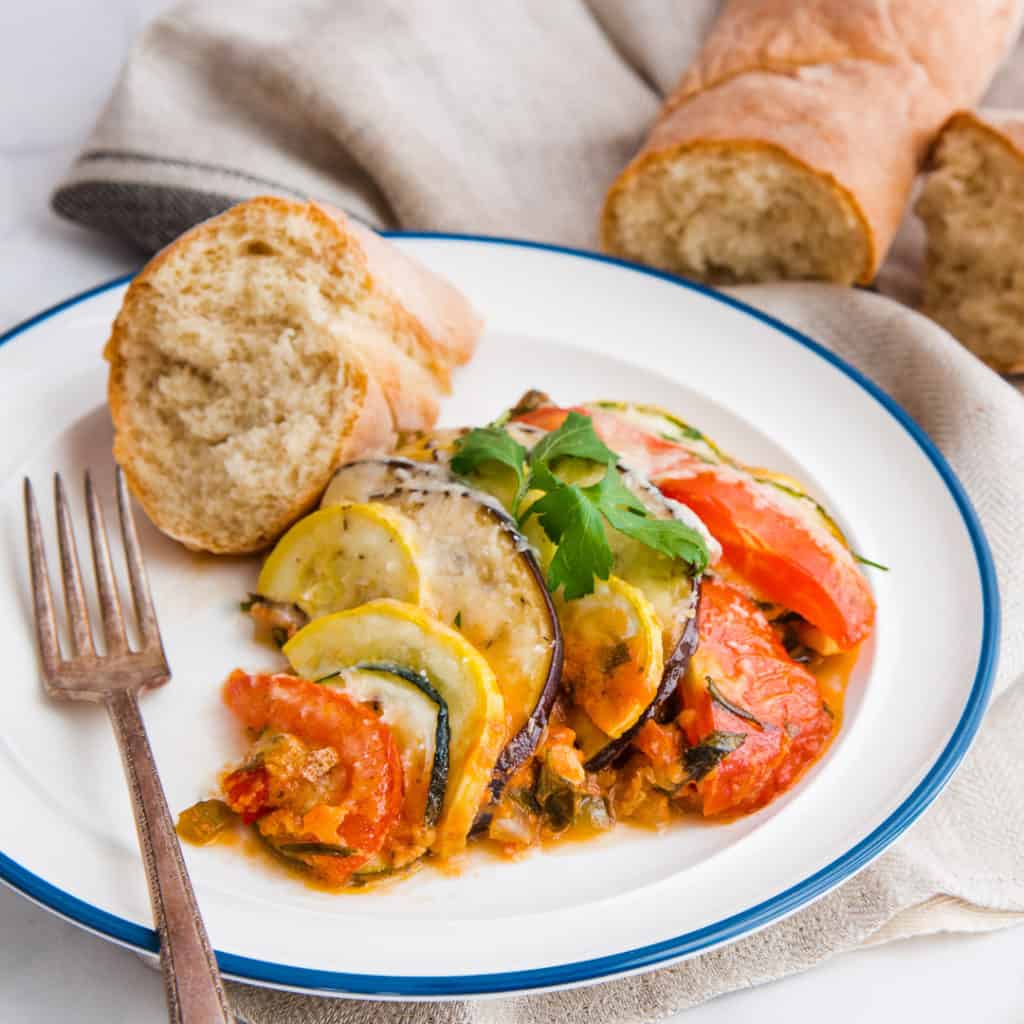 Store leftovers in the fridge for up to 3 days or freeze them for 2 months. 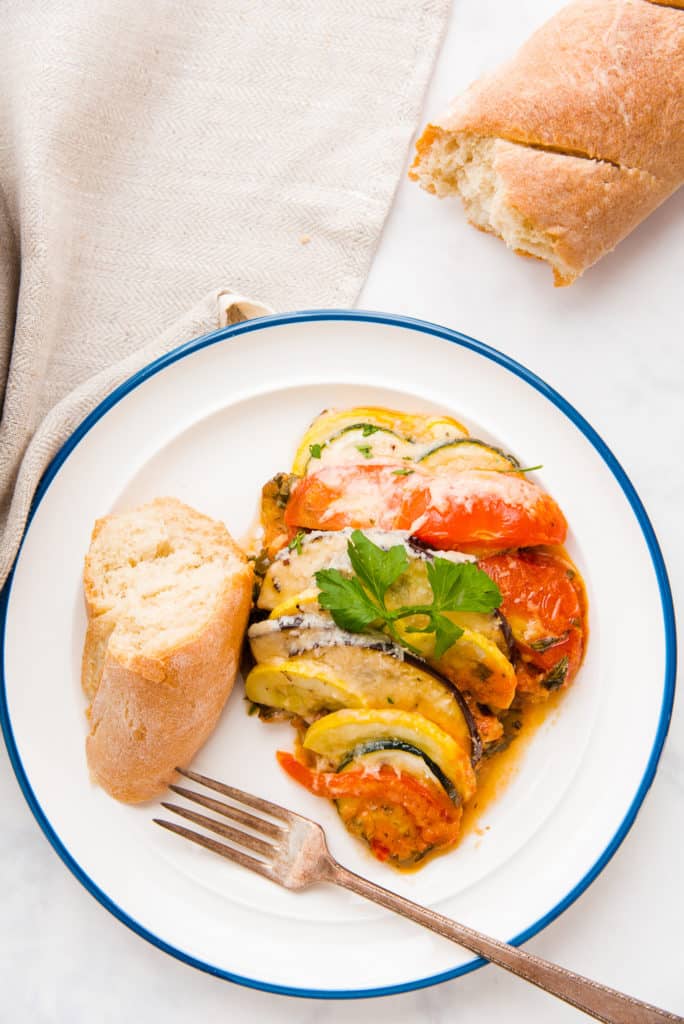 Who says peasant food isn’t good? I’d take this ratatouille over some frou-frou rich people food any day of the week.

Pin this recipe on one of your dinner boards and be sure to share it with your crew!

*This is an updated version of a recipe that was originally published in 2017.* 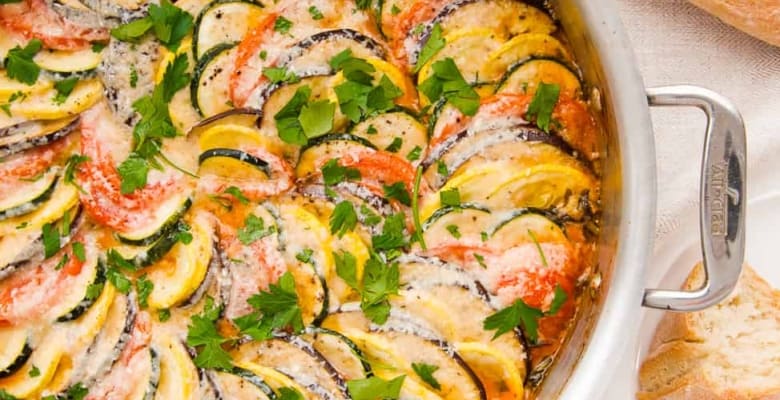 Assemble the Ratatouille and Bake

Leftovers may be stored in the fridge for up to 3 days or frozen for 2 months.

Here are more comfort food recipes like this Italian Ratatouille: 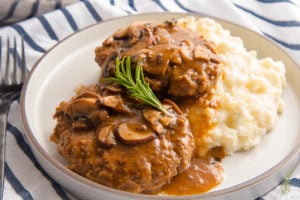 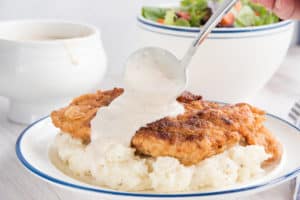 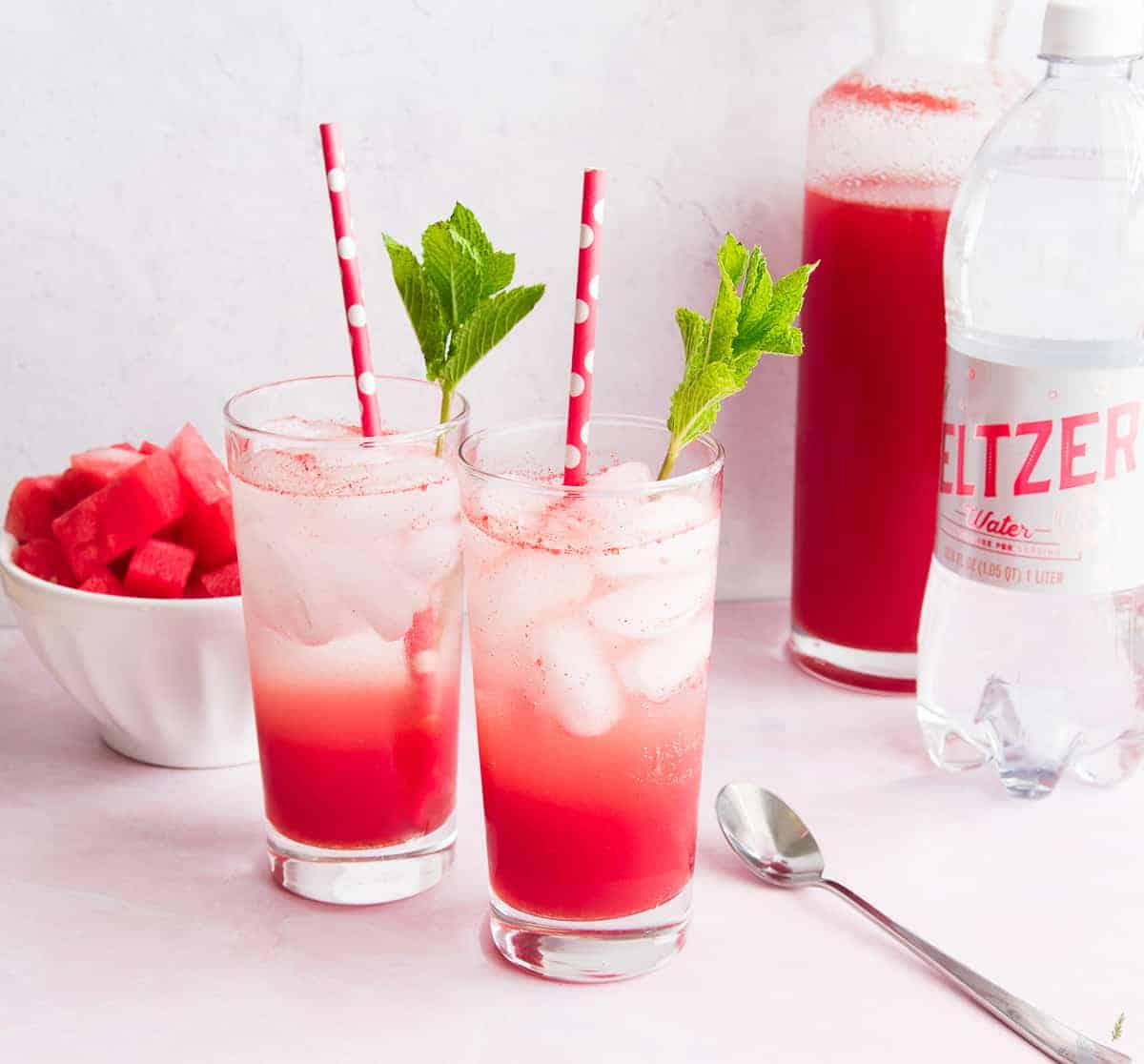 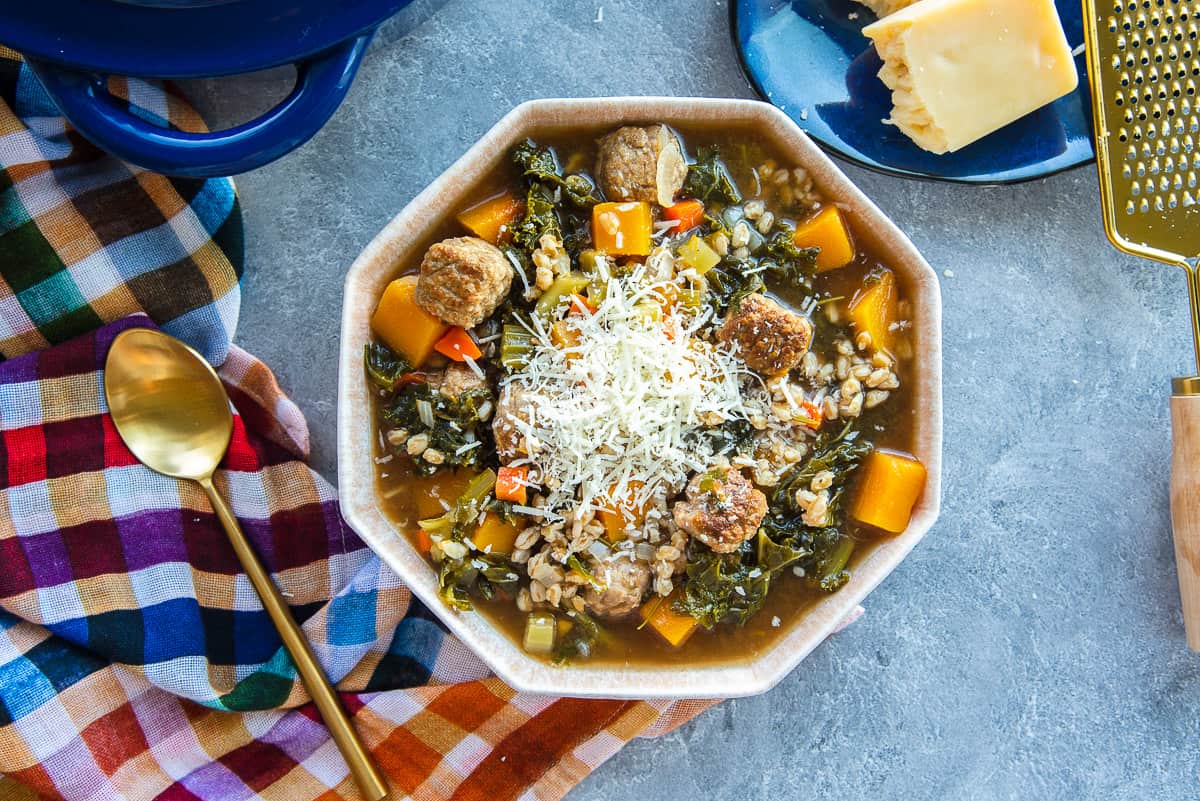 The tomato and mascarpone cheese sauce is heavenly. I took
Your advice and used my mandolin slicer. It’s a little
fuss but I am not as skilled as you so it gave me perfectly even slices to layer and it was beeeeeaaaauuutiful! We all enjoyed it…even the kids who were initially skeptical due to the lack of meat. As always, well done!

I’m so glad to hear the family enjoyed it, Jennifer!

As always, perfect explainations!! Never made ratatouille but ill for sure be using your recipe

I love this take on ratatouille. It’s so simple to make and tastes so fresh!

I can’t wait to try this recipe!! Thank you Marta!!

I was drooling scrolling throught this. I am definetly trying this amazing ratatouille.

Glad to hear that, Armelle! Enjoy it!