Mai Tai Cocktail: A Nod to the Original

June 3, 2020 by Marta Rivera
A nostalgic drink that evokes a tropical vacation... or a dingy tiki bar.
Get RecipePrint Recipe
765Shares 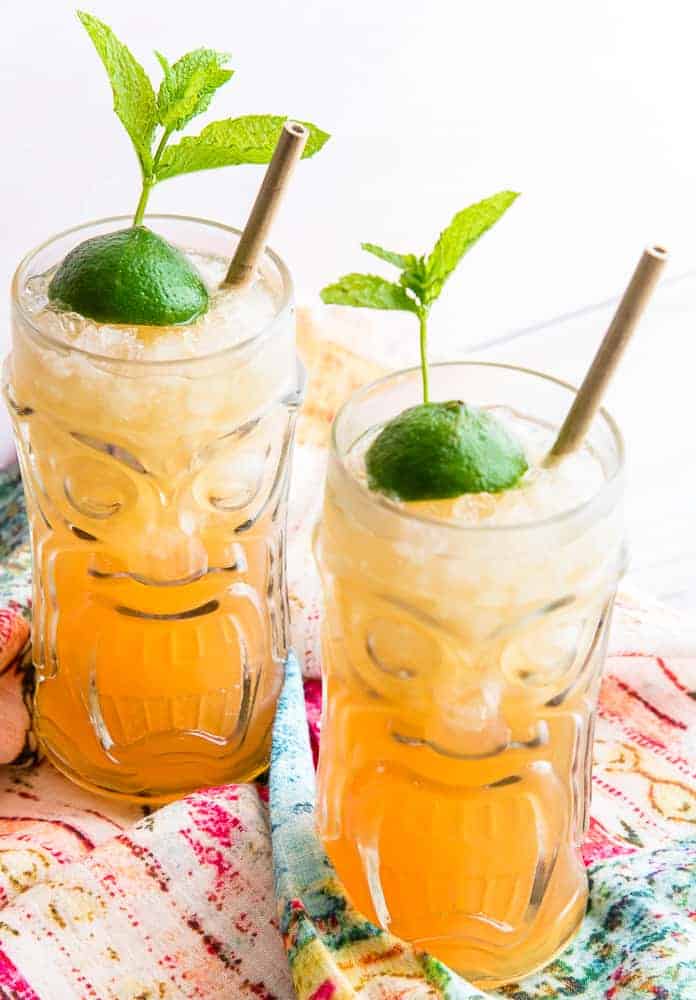 Mai Tai Cocktails evoke nostalgia even for those of us who are too young to remember tiki bars. A rum-based- and I do mean rum-based- cocktail, it is laced with sweet undertones and a punch of citrus from lime juice. Crushed ice dilutes the potency of the drink as it is poured into the most obnoxious glasses you own. Garnish your cocktails with a lime shell and sprig of mint and sip profoundly. Mai tais are potent. Don’t say I didn’t warn you.

What is a Mai Tai Cocktail?

Mai tai comes from the polynesian word maita’i, which means “perfect” or “excellent”. I have yet to hear anyone say anything contradictory after tasting it. Its original version is nothing short of perfection. But, first! We need drama. There’ s always drama. Like the piña colada, the true creator of the Mai Tai has been hotly debated.

Victor Bergeron, Jr. (of Trader Vic’s fame) claims he first invented the drink in the mid-40s. However, Donn Beach, of Don the Beachcomber’s, claims the drink is his creation from the mid-30s. Since no one truly cares when, and by whom, it was created, we’re just going to praise the heavens it was created and move the hell on. But, why does every recipe begin with the same scandal?

The foundational ingredients of this cocktail are: rum, sweet syrup, and citrus juice. The variation plays out differently based on the mixologist. My version tows the line between Bergeron’s and Beach’s, but leans heavily towards Bergeron’s. No one makes the exact recipe these days. How am I so sure of that, you ask?  I know because no one, that I know of, is willing to shell out FIFTY-FIVE grand for a bottle of Wray and Nephew 17 rum. Wray and Nephew 17 rum was the rum Bergeron swore by when making his mai tai. Rumor has it that the popularity of this very cocktail led to its shortage and demand increased. As expensive as it is, I’m not desperate enough to make this cocktail that authentic.

What you need to make your Mai Tai 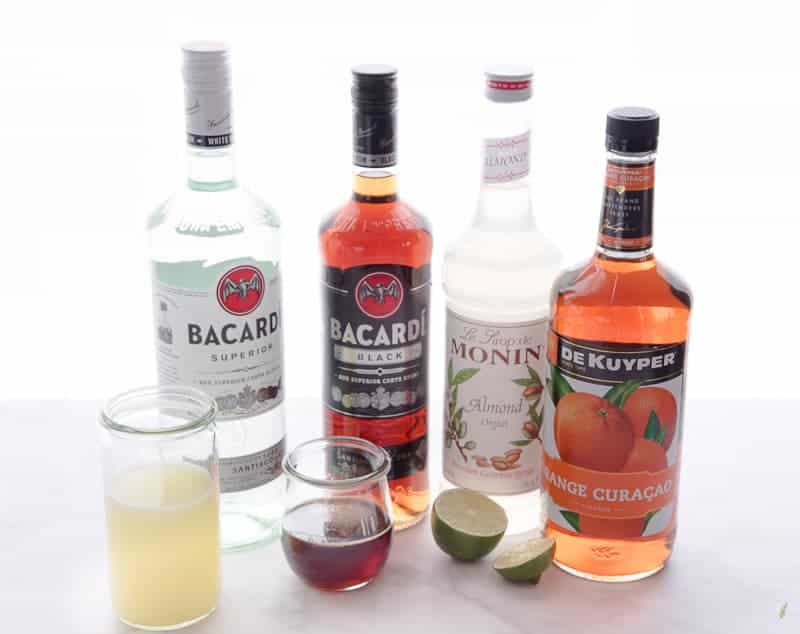 Of course, you’ll also need your tiki glasses (or a tall old-fashioned glass), and crushed ice (the nugget kind is perfect for this). 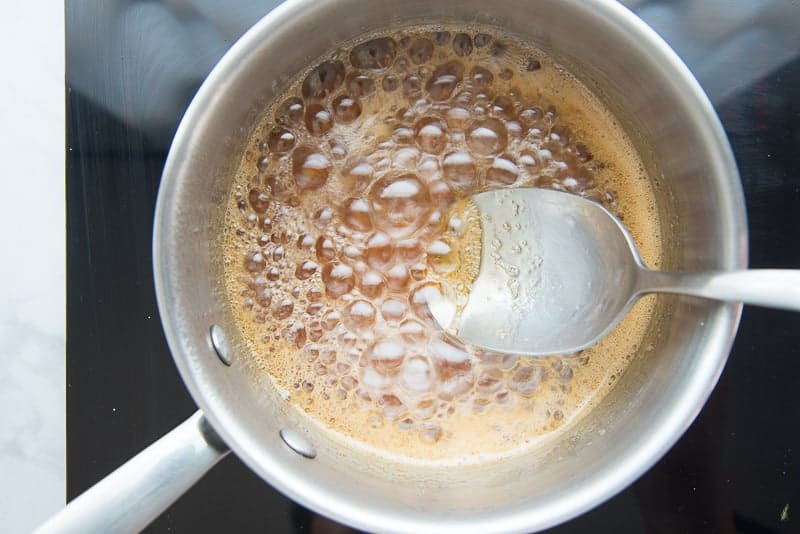 At least 20 minutes ahead of mixing, make your Demerara sugar simple syrup. Since we don’t have that “rich-people” rum, we’re going to mimic its molasses flavor by adding this to our drink.

Demerara sugar is pure, unrefined cane sugar. In a pinch, turbinado sugar- AKA Sugar in the Raw- or dark brown sugar can stand in. In a small pot, stir together equal parts demerara and cold water. Bring this mixture up to a boil while stirring to encourage that coarse sugar to melt. Remove the pot from the stove once the mixture comes to a boil and the sugar is dissolved.

Allow the simple syrup to cool completely before using it. Because simple syrup contains sugar, it’s best to store it in the fridge and not at room temperature. Unless, of course, you’re going to use it all up to make these mai tais. Then just let it cool to room temp on the counter. 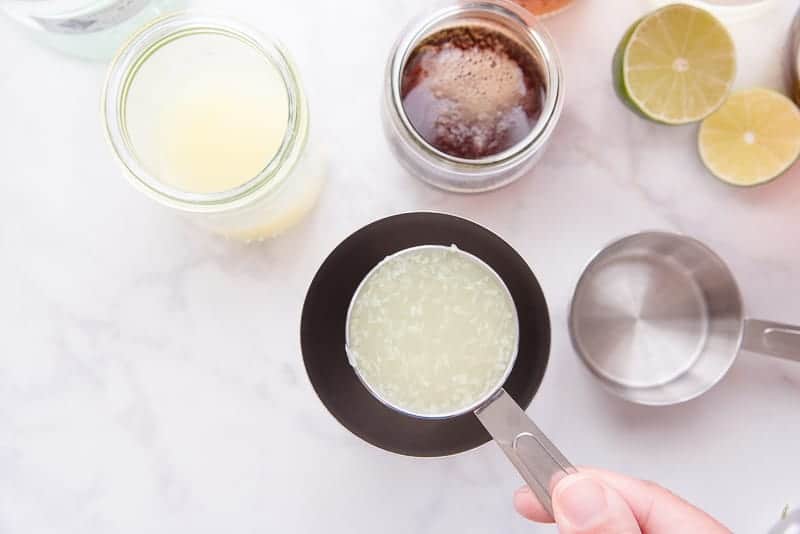 Once the simple syrup has been made, the rest of the recipe is as simple as “pour and shake”.

Pour the freshly squeezed lime juice into the biggest cocktail shaker you own. The day will never come when I suggest using bottled lime juice. This recipe is definitely not a “bottled lime juice” one. The zip and brightness of the lime juice is what cuts through the malty-caramel of the rum and simple syrup.

After you’ve juiced the limes, save two of the lime shells for later. 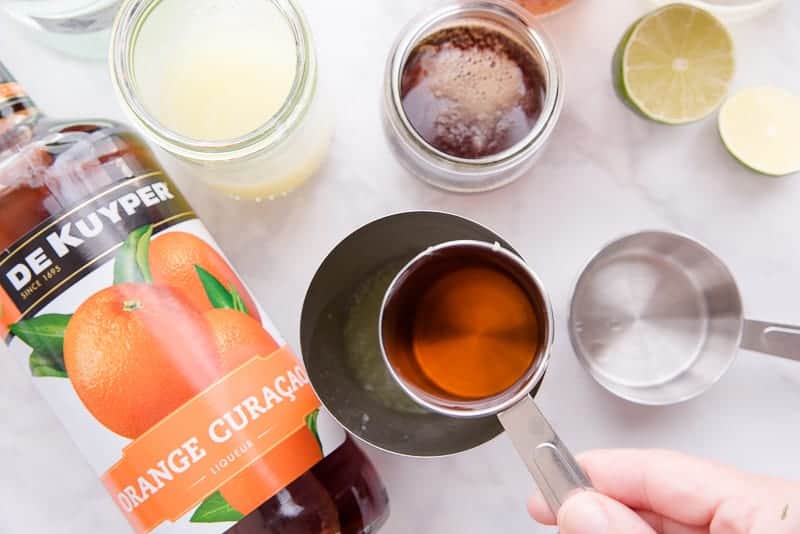 In lieu of orange juice, which, in my opinion, makes a mai tai too sweet, we add orange curaçao.

Dekuyper is my go-to brand. Since there’s more than one type of curaçao, pay close attention to what you’re picking up. I’ve made the mistake of grabbing blue curaçao and ended up with Smurf drinks. Even the blue curaçao tastes of orange, but it doesn’t fit the color scheme for our mai tai.

If you can’t get your hands on orange curaçao for some reason, use triple sec. Cointreau is a last resort if you can’t find either, but since it’s not a true curaçao- one made with lahara fruit from Curaçao- try for the first two. Avoid Grand Marnier altogether since that’s an orange brandy-based liqueur and not a sugar cane one.

Add the orange curaçao to the shaker. 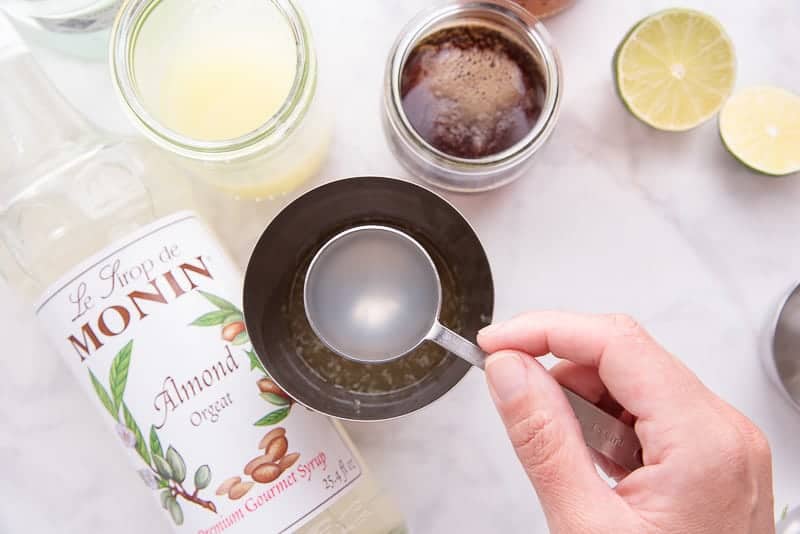 In addition to the raw sugar simple syrup, the mai tai is sweetened with orgeat. Orgeat (pronounced ohr-ZHAT) is a non-alcoholic, almond-flavored syrup sweetener used in most tiki drinks. Monin is the brand I use most often. Don’t overdo it on the orgeat- no matter how much you love its aroma. You can go from maita’i to “bleh” in a teaspoon with this stuff.

As an aside: When I can get my hands on it, I like to add a tablespoon of falernum- instead of orgeat- to my mai tais. Falernum (fa-LEHR-num) has more complexity of flavors with its vanilla, lime, and cloves, in addition to almond. Also called Velvet Falernum, it’s a pain in the butt to find in certain markets, but if you’re lucky enough to score a bottle, grab it.

On to the Backbone of this Mai Tai 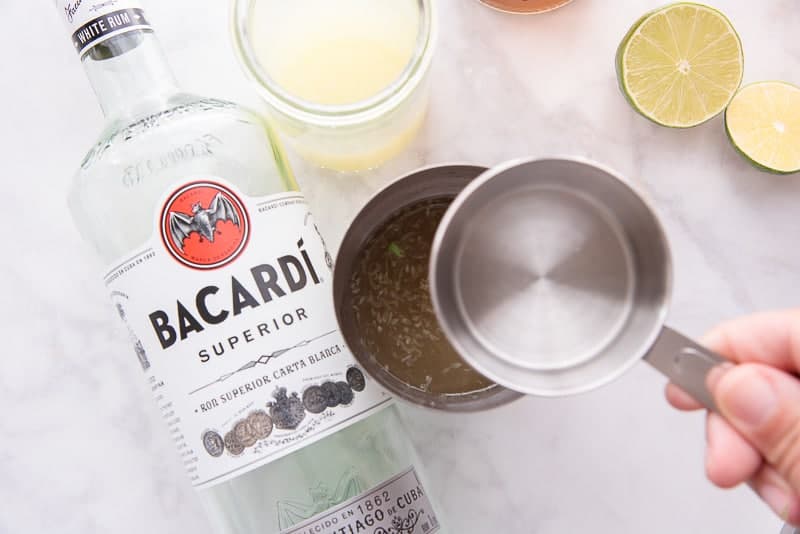 Since we need to mimic that expensive-ass rum, we’re going to use both white and black Bacardi rums. In case this your first recipe with me, I’m Puerto Rican so I’m all about sticking to rum that I know. Jamaican or Cruzan rums are two other great options to use in this recipe, as well. There are even great Hawaiian rums on the market now!

However, for the average  budget, you can’t go wrong with Bacardi Superior and Black.

Add the white rum (Superior) to the shaker. 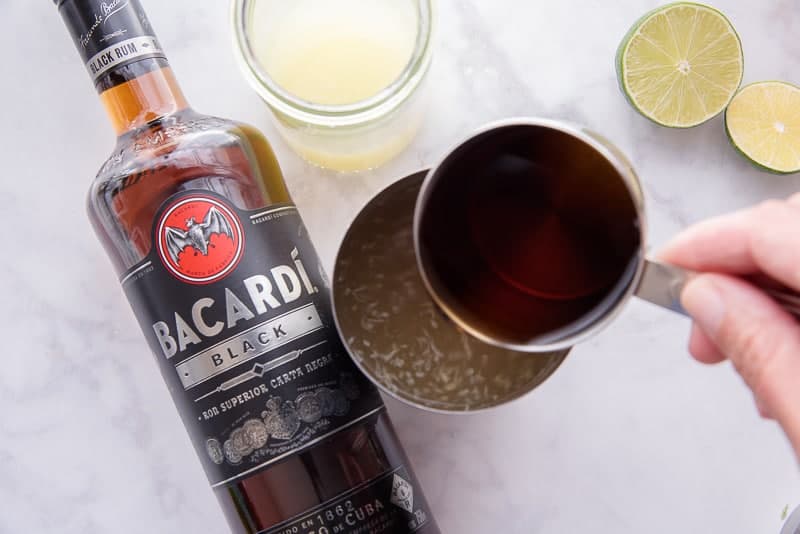 And follow that with the Black rum. You can use Amber rum if you don’t have black on hand. The darker the better, though. It best mimics that charcoal-like, malty flavor of the super expensive rum.

Once everything has been added to the shaker, cap it, and shake vigorously. Yes, I realize we didn’t put ice in the cocktail shaker. There’s a method to my madness. Stay with me.

Chill with the Right Ice 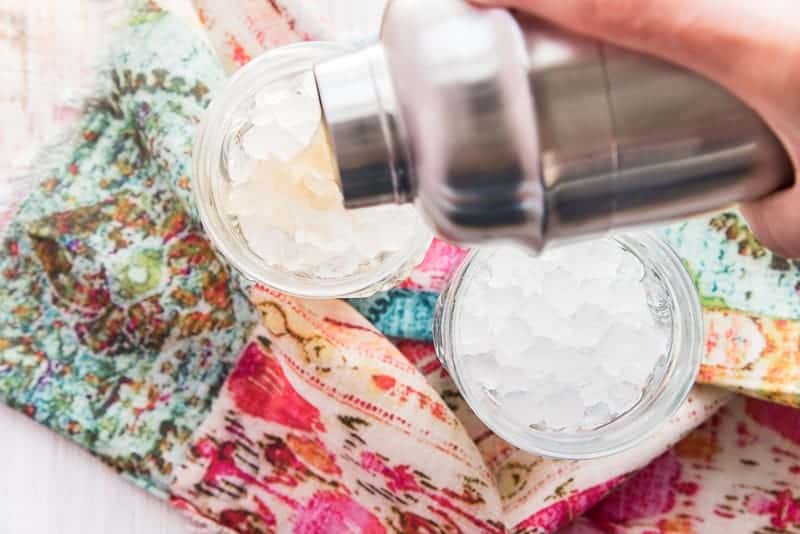 Because cocktail shakers are only so big and because we’re going to need to dilute all this licka, I’m pouring the mai tai over ice.

I really need you to invest in some tacky tiki glasses, by the way.

Fill your throwback tiki glasses to the top with nugget ice. You know what nugget ice is, right? It’s the ice pregnant women will claw your eyes out to get. I buy mine from Sonic, but if you don’t have one nearby, you can just use crushed ice. But be sure to fill it all the way to the top of the glass.

Now, remember, the majority of this mai tai is liquor, so it needs to be watered down. That’s why we’re adding so much ice now. Either add the ice, or wake up tomorrow with a hangover. You can’t have it both ways. 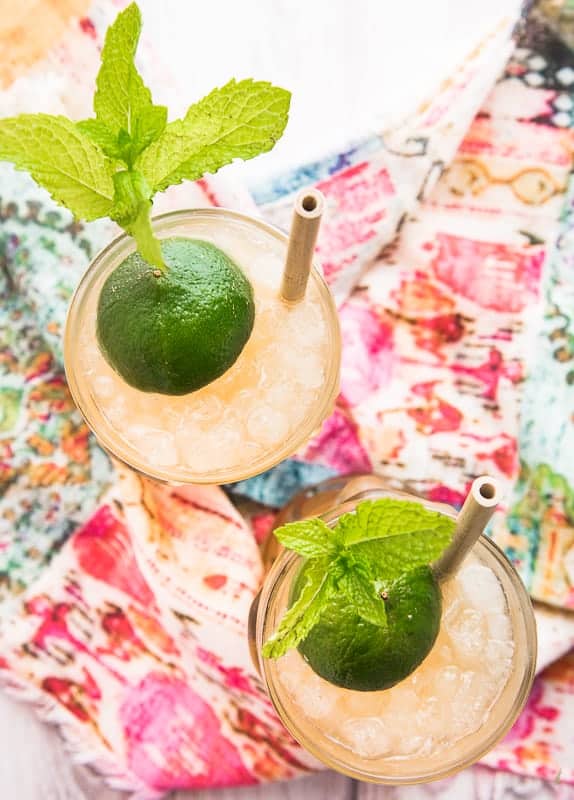 What I love most about this mai tai cocktail is the garnish we’re floating on it. Can you guess what the lime shell and mint sprig represent?!?!?

AN ISLAND!!!! I knoooooooowwww!!! Sooo adorable!!! (If you didn’t guess an island, you need to pretend like you did)

Take those lime shells you reserved earlier and use a toothpick to pierce a hole on one side. Insert a sprig of mint into the hole you made with the toothpick. Place the island on the ice and your mai tai is gorgeously garnished! 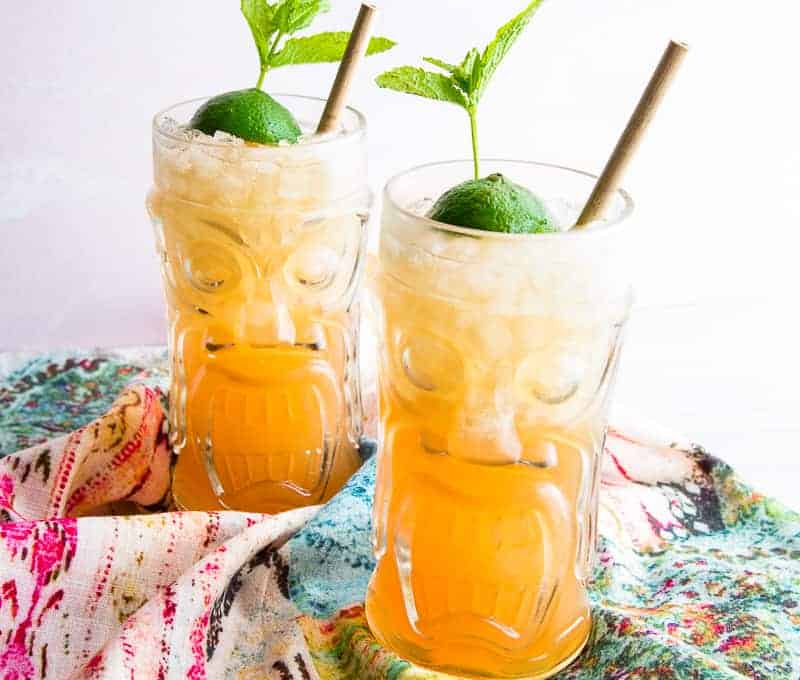 Insert bamboo straws– you better not even think of paper parasols- and your mai tai is ready to be enjoyed. 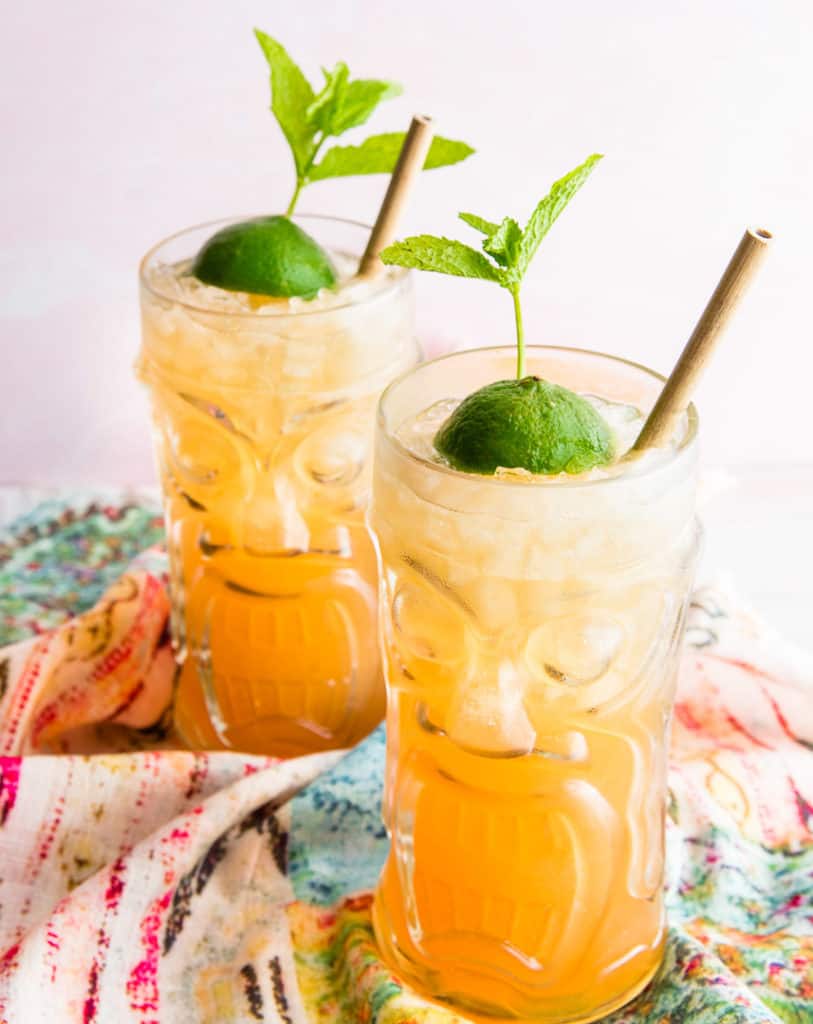 Please do so responsibly, though.

Pin this recipe to your cocktails board and share it with your friends and fam. Couldn’t we all use a little something maita’i these days? 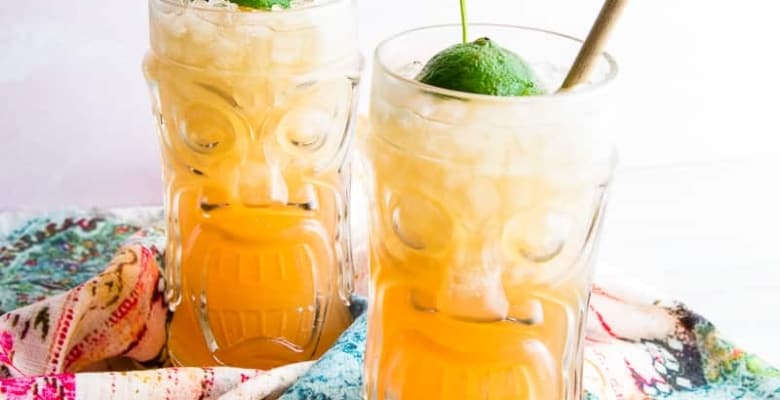 *falernum may be used in place of orgeat.

This Mai Tai isn’t the only controversial cocktail out there!
Try these out, too: 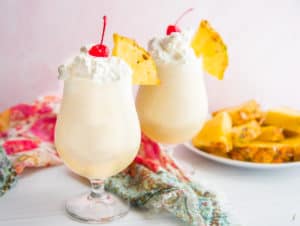 Goodness, I could sure use one of these now! I know this will be delish!

Oh, trust me. They are delish!

Definitely know what we’ll me trying this weekend ? picking up a bottle of curaçao asap!

Go for it, Nij! You’re going to love this one!

Oh I am so ready to re-create this Mai Tai! You’re step-by-step instructions are PERFECT! I will definitely be tagging you on IG as soon as I make it!