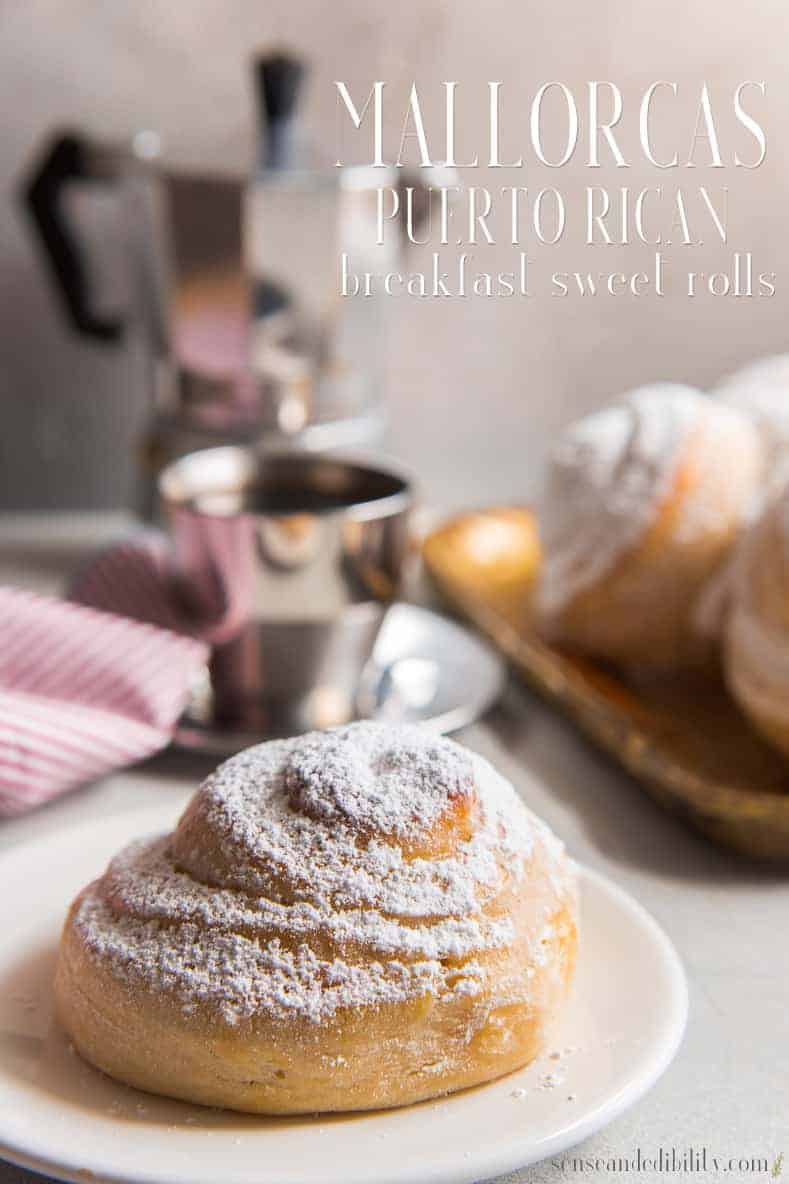 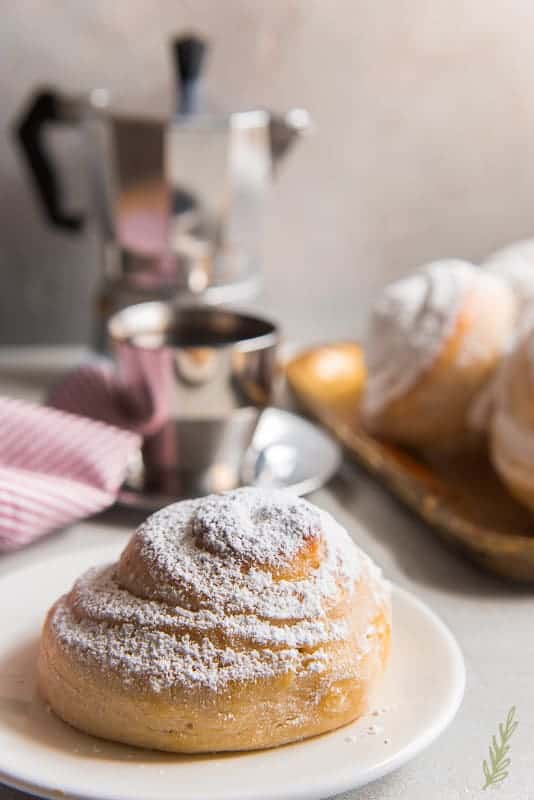 This is a revamp of my Mallorcas recipe, which I first posted in January 2017. The recipe is still the same as before, I just updated the earlier ghastly pictures. Enjoy!

Guess what the hardest thing about being bi-racial is? It’s having more than one amazing cuisine to love.

There are much harder things about being Black and Puerto Rican. The main issue growing up was not fitting into either of my races easily. I wasn’t “Black enough” to be considered a Black girl. Puerto Ricans straight up called me a gringa. The one thing that helped me fit in was my love and mastery of my ancestral cuisines. Food transcends race. These Mallorcas helped to do that for me- not so much with others, but with myself. The process of making mallorcas were my way of reassuring myself that I was worthy of being called a Puerto Rican woman…just one with a little more oomph. I mean, how many Puerto Rican women do you know who make these? Seriously! Throw me a bone.

My childhood insecurities aside, if you have never had mallorcas, you’re not going to be shocked when you taste them. Mallorcas have a flavor which is similar to Hawaiian sweet rolls. These, though, are topped with both a sugar glaze and powdered sugar. I’m no anthropologist, but I’m going to go out on a limb and say they’re a holdover from the island’s Spanish colonizers. Not only suitable for breakfast, mallorcas make a fantastic sandwich bread.

So, roll up your sleeves and let’s get mixing.

What will I need to make Mallorcas? 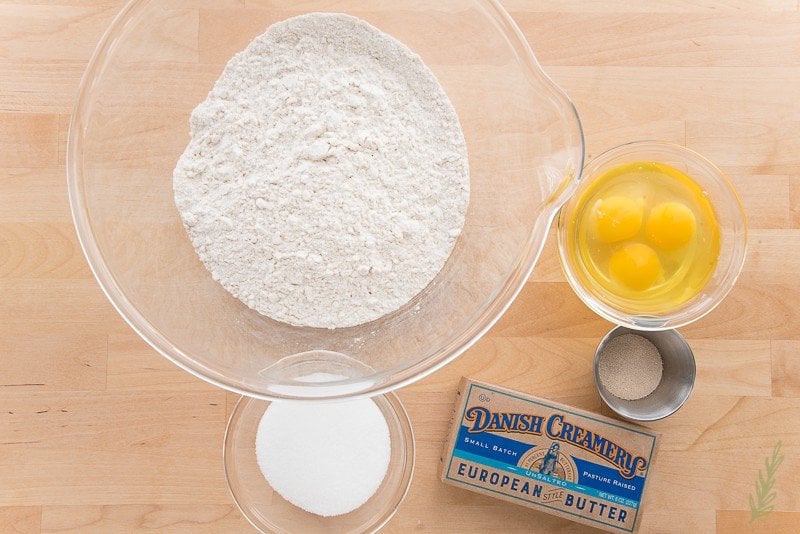 The ingredients for this sweet bread are pretty accessible. You will need room temperature unsalted butter, bread flour, eggs, sugar, yeast, and a wee bit of salt. To top the finished rolls, you’re going to make a sugar glaze using light corn syrup, sugar, and water. More sugar- in the form of powdered sugar- will come later.

A few tools you will need are: a rolling pin, a sharp knife or a pizza cutter, sheet pan, pastry brush, and a sifter. 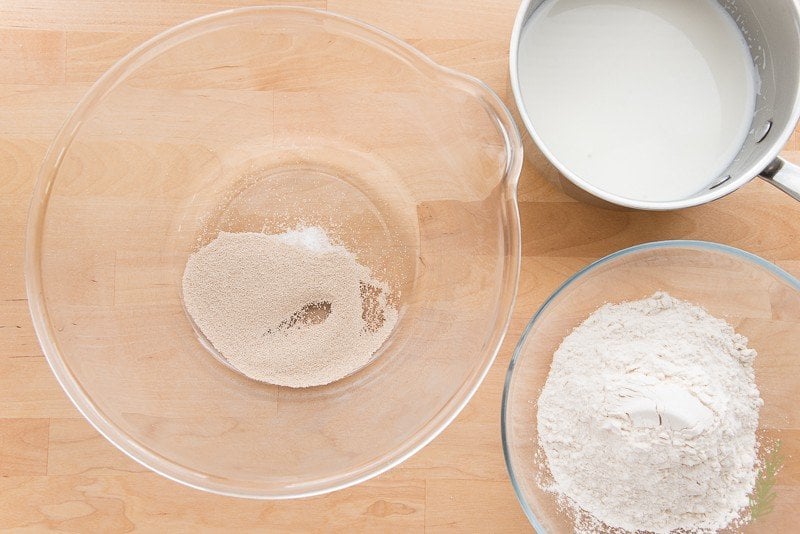 Mallorcas begin with a sponge of sorts. Because it’s not fermented for a long period of time, it’s not considered a starter.

Scald, then cool, a cup of whole milk in a saucepan. You can also heat the milk in the microwave for 1 minute. Test the milk after it’s been cooled a little to make sure it’s not too hot. The milk needs to be ’round about 110°F. Warm enough not to burn your inner wrist when you put a drop on it. 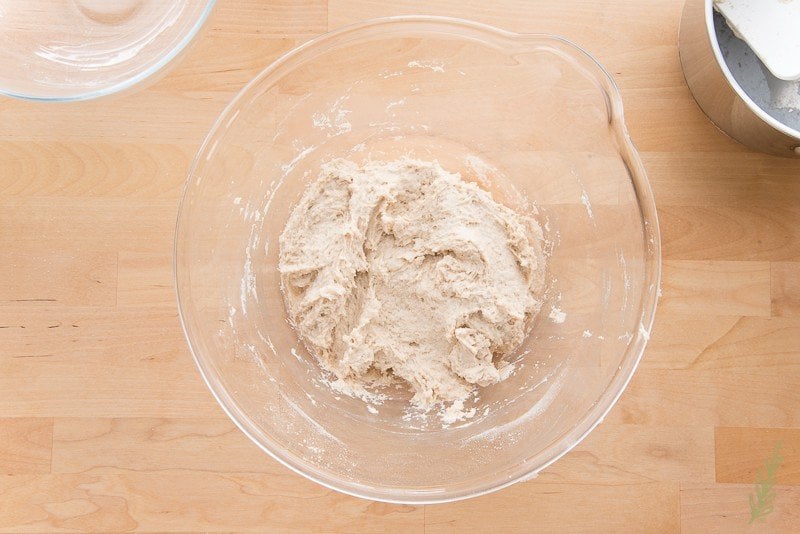 Use a rubber spatula to stir these together to form a thick paste.

Cover the bowl and allow the paste to rise until doubled in a warm, draft-free place. This usually takes an hour.

Cream together the butter and sugar 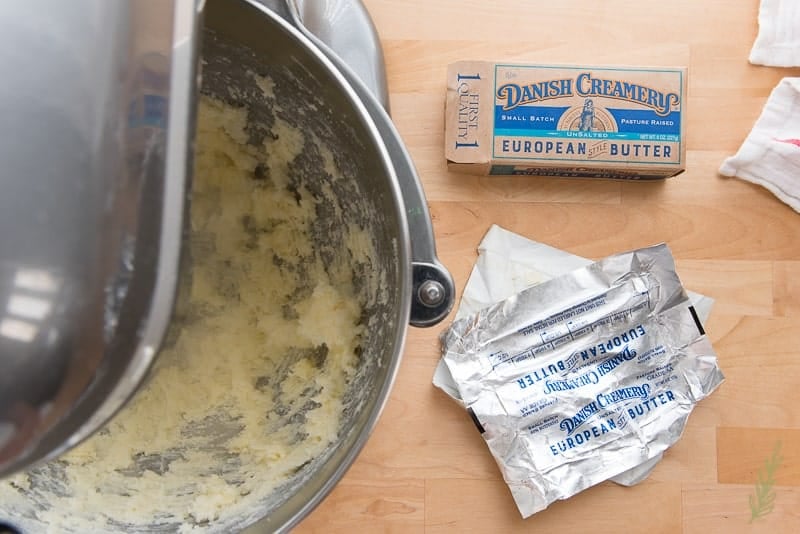 After 45 minutes, begin creaming together your butter and sugar. I prefer to do this in my stand mixer. Cream the two together on medium-high speed for 4 minutes, or until the mixture looks pale yellow and fluffy. 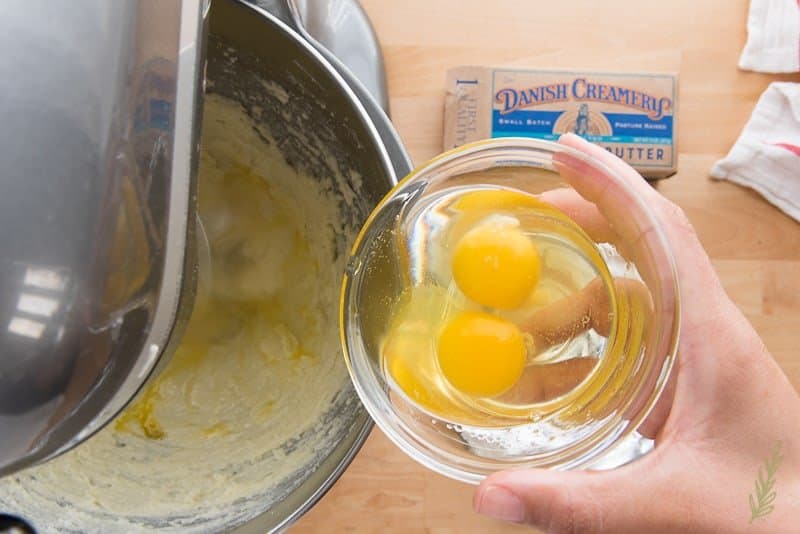 Decrease the speed to low and add the eggs to the bowl, one at a time. Once an egg is incorporated into the mix, turn the mixer off and scrape down the bowl. Continue adding the eggs until they’re all mixed in. 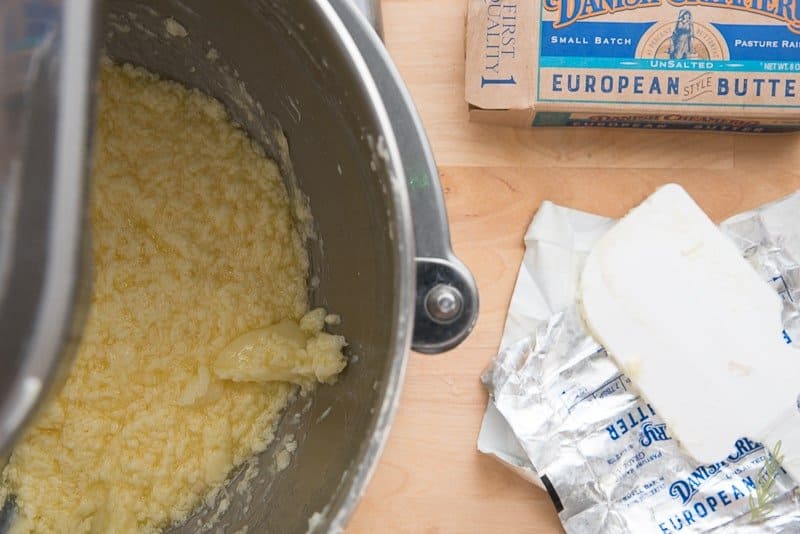 Since we’re creating an imbalance between the water and fat with the eggs, the mixture will look curdled. Don’t freak out!

Add the sponge from earlier and half of the remaining flour to the bowl. Blend on low speed just until a thick dough forms.

Switch to your mixer’s dough hook and add the rest of the flour to the bowl. Knead the dough for 5 minutes on second speed. The dough will be soft and sticky when you’re finished kneading it.

Chill to firm the Mallorcas dough up 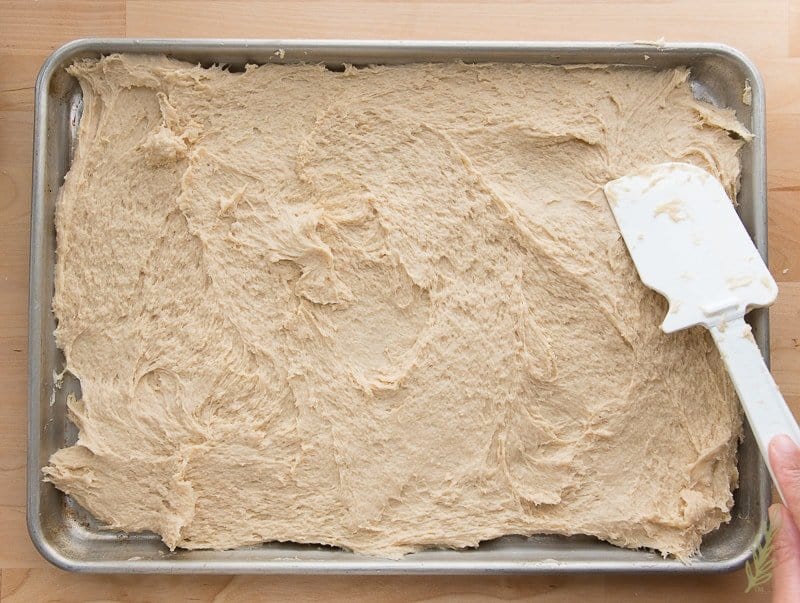 If only this heading worked for my thighs. Just another issue I have, don’t mind me.

Transfer the dough to a lightly greased sheet pan. The dough is going to be very sticky, so you need to grease the pan. Don’t flour the pan or the flour will cake and later bake into hard chunks of grossness. Use a rubber spatula to spread the dough into an even layer on the sheet pan before covering and chilling for 1-24 hours. The longer you allow the dough to retard in the refrigerator the firmer it will be and the deeper the yeast flavor will become. 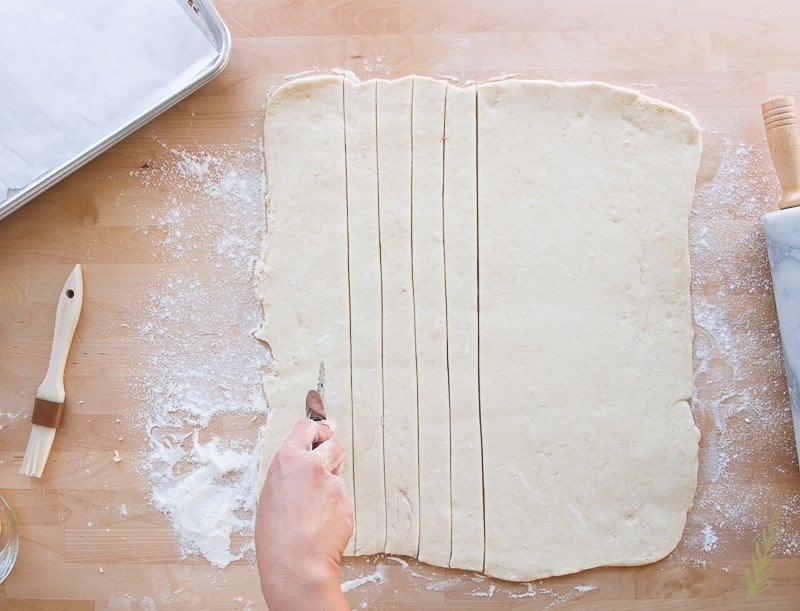 After the dough has had a chance to firm up, lightly flour a work surface and roll the dough into a rectangle. Aim for a rectangle that is about 20″x 15″ or thereabouts. The dough should be no more than a 1/4″ thick.

Use a pastry cutter, a pizza cutter, or a very sharp knife to cut the rectangle into 1″ wide strips. I don’t go overboard with measuring these strips, I just eyeball it. You do want to make sure you get 12 strips, because that means you will have 12 mallorcas! I usually discard those ragged edges you see on the left and right sides, too. Trimming off one edge from the short side isn’t a bad idea either. This trimming business is solely for aesthetic reasons, though, so don’t stress over it. 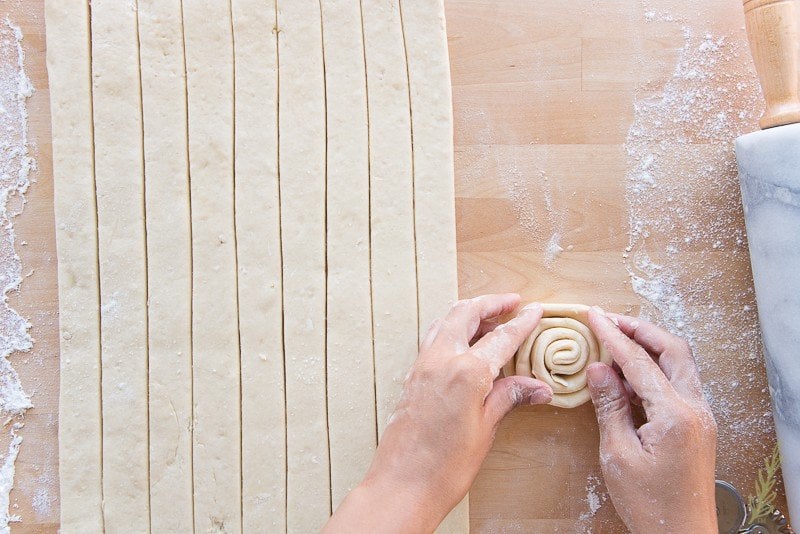 Start at one end of a strip and roll it up into a circle. Kind of like you would do to make a cigar…except we don’t do that here.

Once I have my rolled dough circle-thing, I spread the layers open a little- like a flower- to give it a prettier appearance.

The reason you don’t roll the rectangle up like a cinnamon roll and cut it is because you want to keep that snail-shaped bun as sharp as possible. Slicing would smoosh the layers together and eliminate those lines of demarcation. 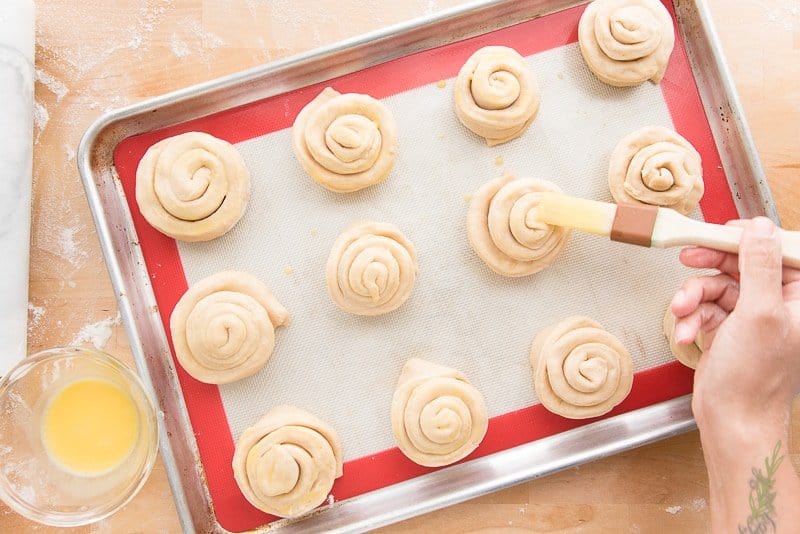 Cover your rolls with a clean kitchen towel and set the pan in a warm, draft-free environment. Your microwave is great for this. Proof the rolls- let them rise- for 45 minutes to 1 hour.

Once the rolls have puffed up (they may or may not spread while proofing), brush them with a thin layer of the egg wash.

Bake your mallorcas for 20-25 minutes at 350°F, or until they are a light brown color and sound hollow when thumped. 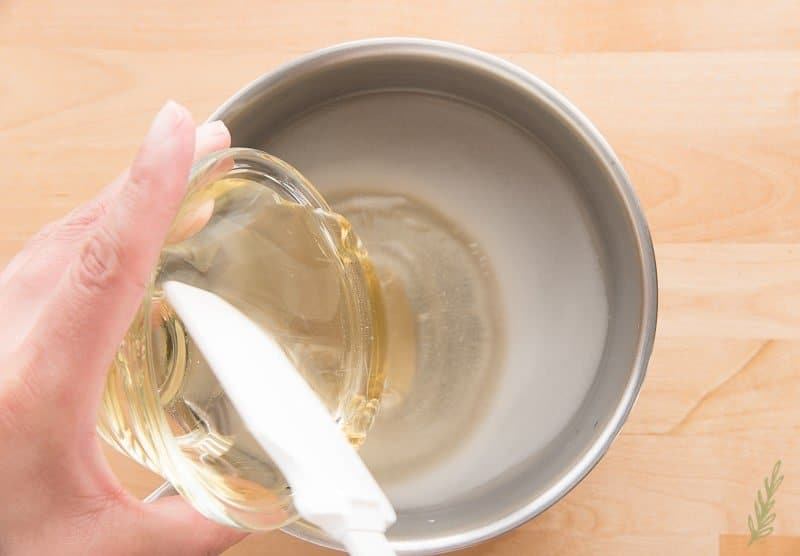 While your mallorcas are baking, prepare your sugar glaze. You can prepare the glaze one day in advance and keep it at room temperature. But, it’s easy to throw together, so I make it as needed.

In a small saucepan, stir together the light corn syrup, water, and granulated sugar. 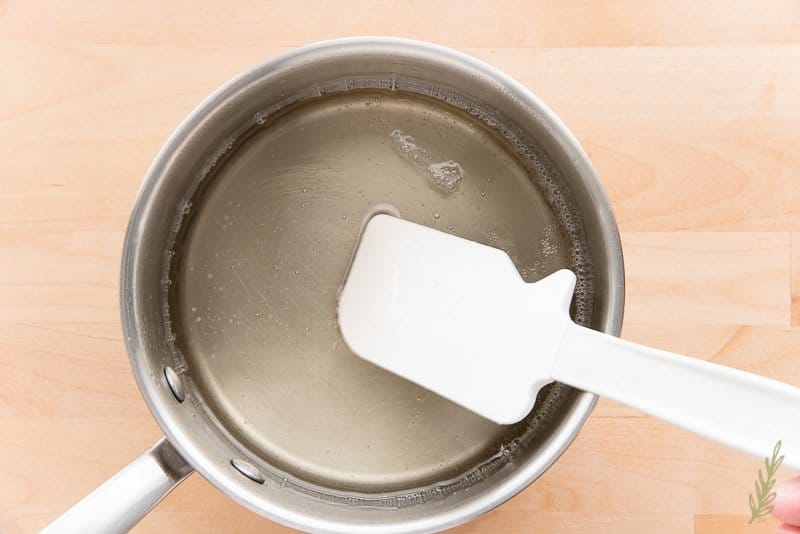 Bring the mixture to a boil over medium-high heat, stirring frequently. Let the mixture boil for 1 minute and take it off the stove. Allow the sugar glaze to cool until you’re ready to brush it onto the mallorcas. 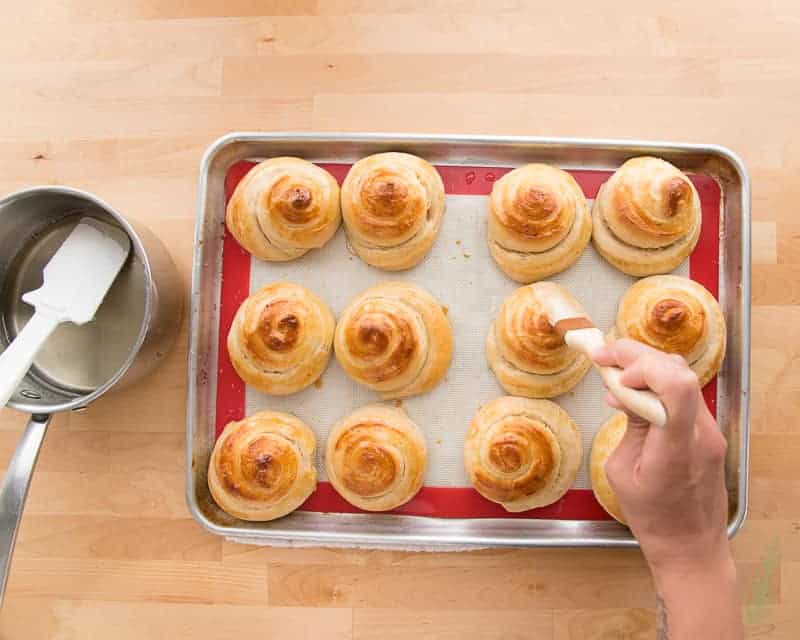 After you bake the rolls, take them from the oven and allow them to cool for 15-20 minutes.

Brush one or two layers of the sugar glaze onto the rolls. Let your sweet-tooth determine if you want to go a third round or not. 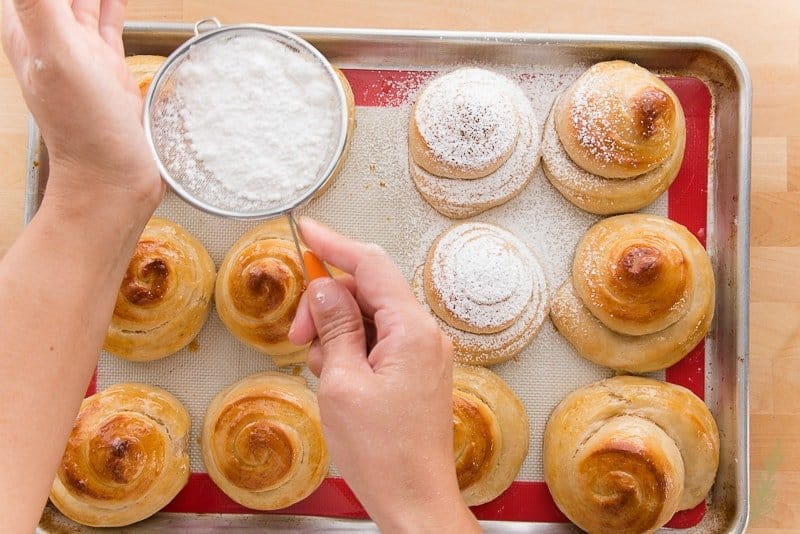 To finish the mallorcas, sift a generous amount of powdered sugar over their tops. This is optional. The rolls are amazing on their own, with the glaze, or with the glaze and the powdered sugar. A sugar topping is definitely the traditional way to go, though.

Enjoy Mallorcas Alone or with Coffee 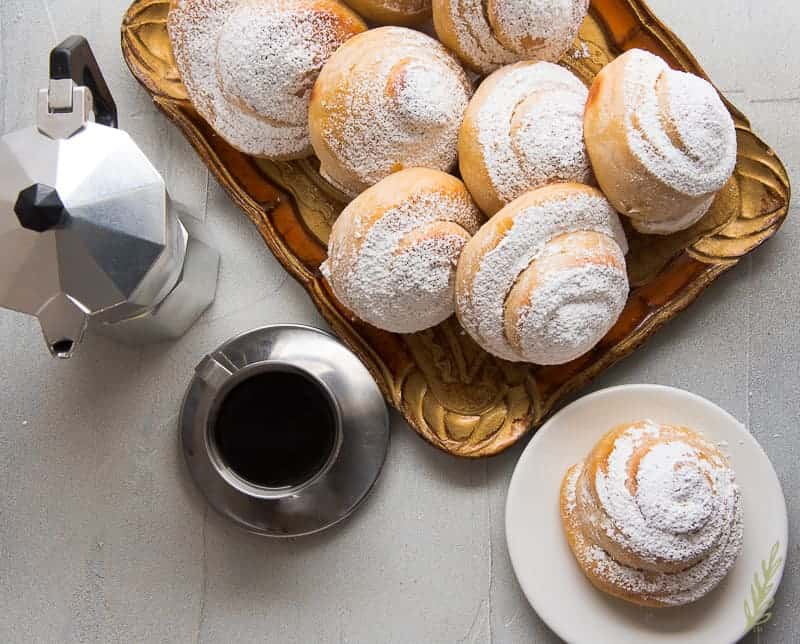 I’m so Puerto Rican I’ll eat these mallorcas by themselves. How’s that for gringa? No, seriously. I’m notorious for scarfing down a mallorca while editing pictures or writing blog posts. Then, when the twins ask me if I’ve been eating them, I lie and say no. When they point to the powdered sugar on my shirt I tell them they’re being disrespectful and that God is watching them. It never works out in my favor.

Anywho, the most common way to enjoy these mallorcas is with a shot of espresso or café con leche. 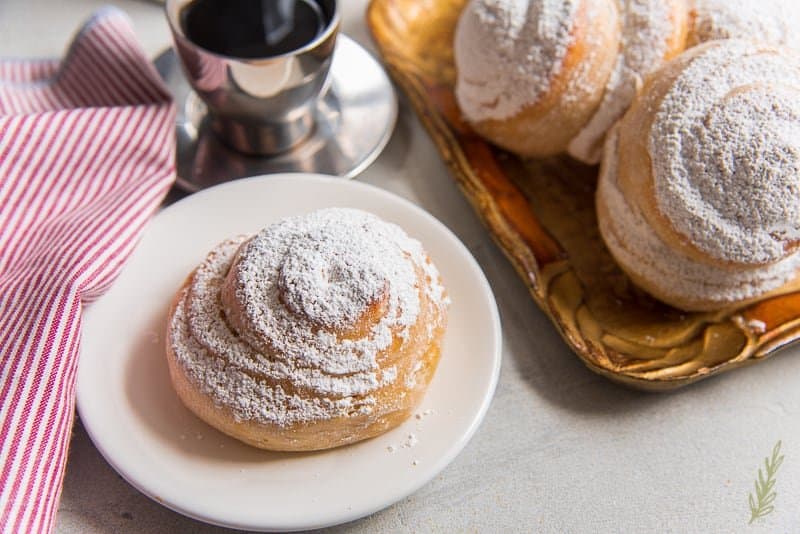 What’s great about them is you don’t need as much sugar in your coffee. Just dunk a mallorca in it.

If you’re a freezer-friendly type of baker, I recommend freezing them after baking them, but before you sugar them. They’re great in the freezer for 2 months.

Bake these Mallorcas this weekend. Let me know if I’m worthy of calling myself a Puerto Rican. It doesn’t matter if you do or don’t, to be quite honest. It’s taken a while to get here, but I’m pretty secure in my identity. The mallorcas do help, though. 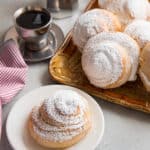 Print it Pin it Rate this recipe
5 from 63 votes

Mix the Egg Wash and Prepare the Sugar Glaze

Bake and Top the Rolls

The reason you don't roll the rectangle up like a cinnamon roll and cut it is because you want to keep that snail-shaped bun as sharp as possible. Slicing would smoosh the layers together and eliminate those lines of demarcation. I recommend freezing them after baking them, but before you sugar them. They're great in the freezer for 2 months. 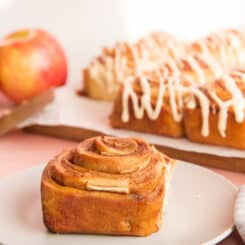 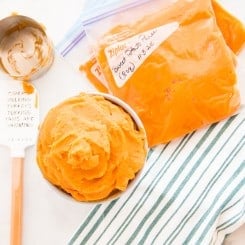 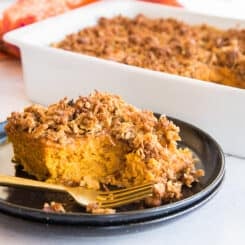 I had some stuffed with guava and cheese today. Any advice on how to do that? Also what kind of cheese?

I don’t think it was a mallorca you had. It sounds more like pastelillos de guayaba y queso, since mallorcas don’t really get stuffed. Check this recipe out: https://senseandedibility.com/pastelillos-guayaba-guava-turnovers/

My family loved those sweet rolls! They were easy to make and so delicious

I’m so glad you enjoyed them, Dennis!

Oh wow, this is an interesting breakfast recipe. I loved having this for my breakfast and they were somewhat easy to make too.

Yep! Though the process is detailed, it’s a pretty straightforward recipe.