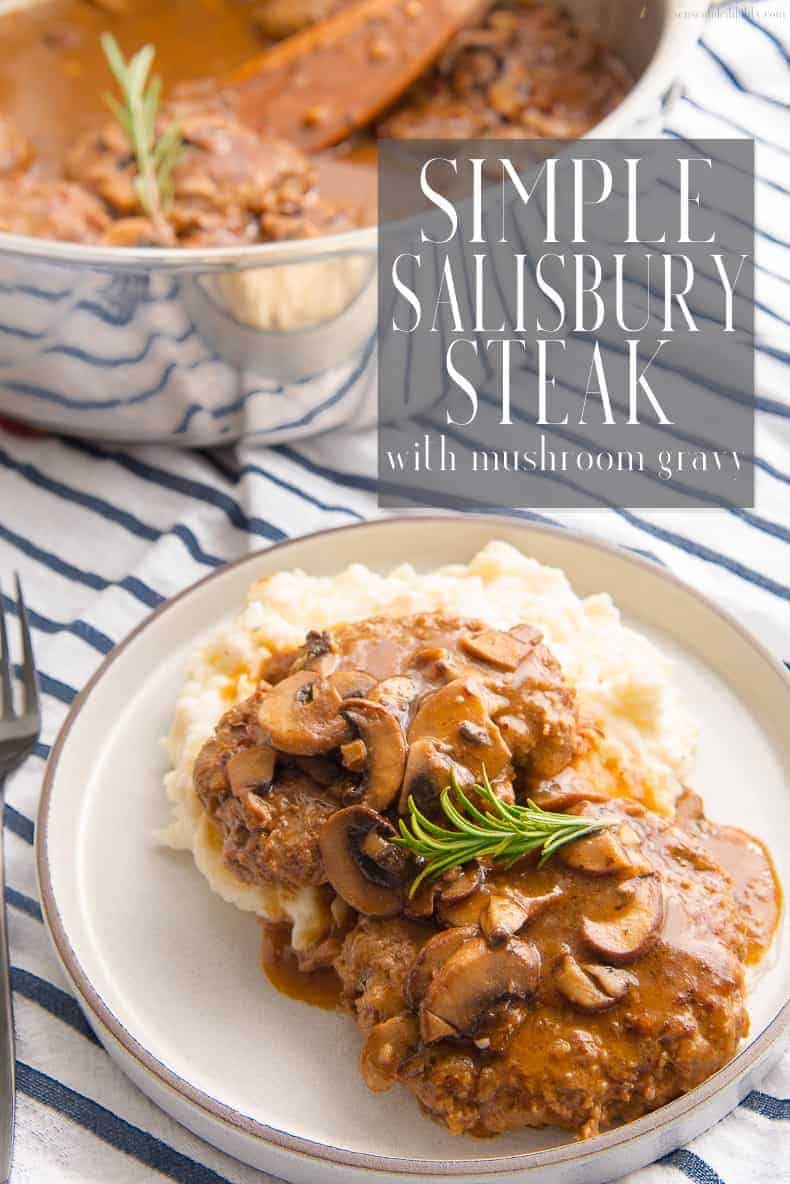 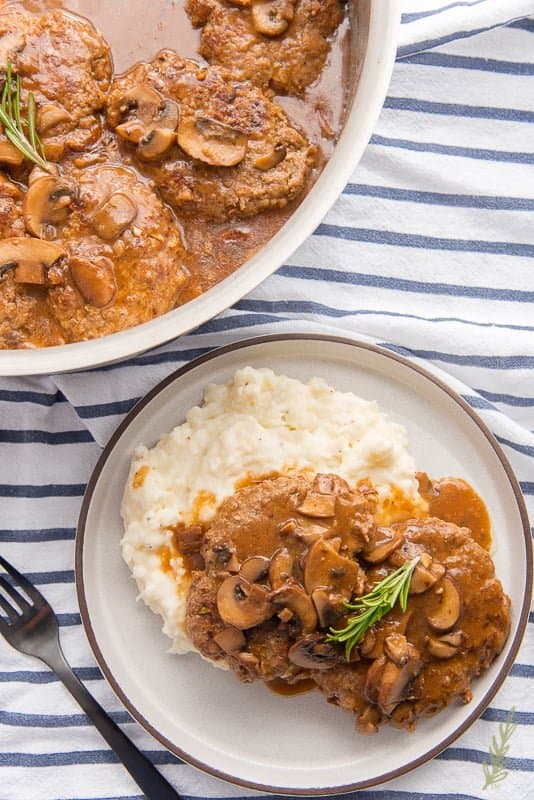 I know that I’m going to date myself here, however, we all know I’m no Spring chicken. On many nights during my childhood, dinners consisted of Banquet TV dinners. If you’re a young buck, you may feel lost and have no idea what I’m talking about. Let me explain: TV dinners were complete meals that were portioned into school cafeteria-style aluminum trays before being frozen. After ripping them out of their box, you slid them into a preheated oven and, 30 minutes later, you had a meal complete with dessert! My favorite TV dinner was the one with Salisbury Steak. It came with the meat [of questionable origin] patties, corn kernels, mashed potatoes, and a brownie. I just now realize how much I have evolved as a diner.

But, truth be told, that was one of the few good memories I have from my childhood. When I started cooking for my family, around the age of nine, the first thing I set out to do was develop a Salisbury steak recipe. I did and I believe my version is leaps and bounds ahead of the frozen meal-in-a-box. So, here’s my childhood favorite in a more refined form.

What is Salisbury Steak?

For the longest time, I thought Salisbury steak was an English dish. It had an English town in the name, so I figured I was right. Nope! I was wrong. Salisbury steak is an American invention. Seems like most historians point to the Mongols as the first creators of minced meat patties. The Germans later took up the mantle with their version called frikadelle. Salisbury steak is minced meat- beef, pork, veal, or a combo of the three- that’s mixed with fillers and shaped into patties. Not burger patties, mind you, instead, they are oval-shaped. The steak is commonly served smothered in a brown pan gravy made from the patties’ drippings.

What you’ll need to make this Salisbury Steak Recipe: 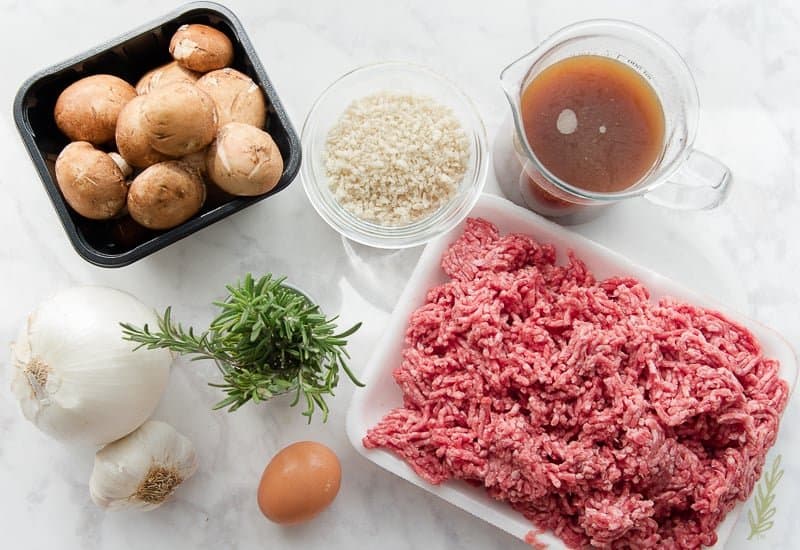 The meat that’s traditionally used in this recipe is beef. I have used a blend of ground beef, pork, and veal to make this Salisbury steak before, however. Aromatics- onions and garlic- as well as binders, like eggs, breadcrumbs, and mustard, are also added. To create a hearty gravy, mushrooms and a roux- made from equal parts fat and flour- are combined before beef stock and herbs are added. 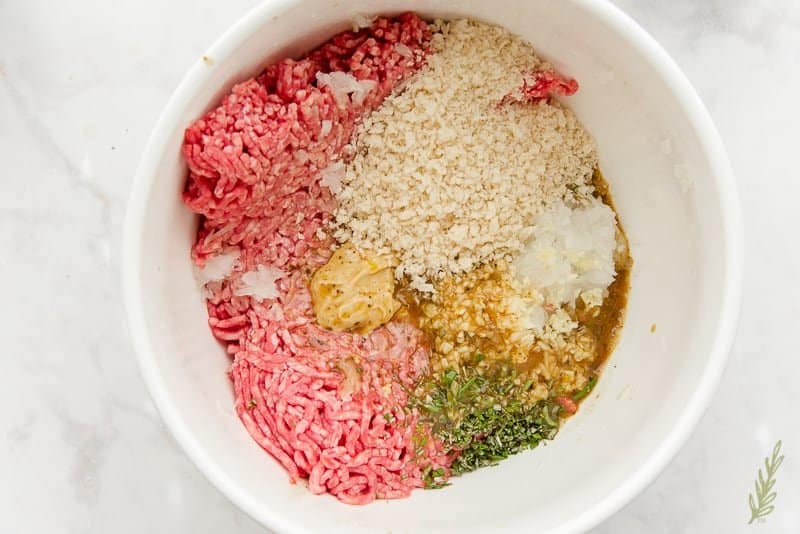 To begin, combine the ground meat, egg, breadcrumbs, grated onion, garlic, rosemary, and spices together in a large mixing bowl. Grating an onion into your patties not only keeps the patty moist, but imparts great flavor. Mix everything together just until blended. But, be sure not to handle the meat too much or it will grow tough and gummy.

The best way to measure and form the Salisbury Steaks 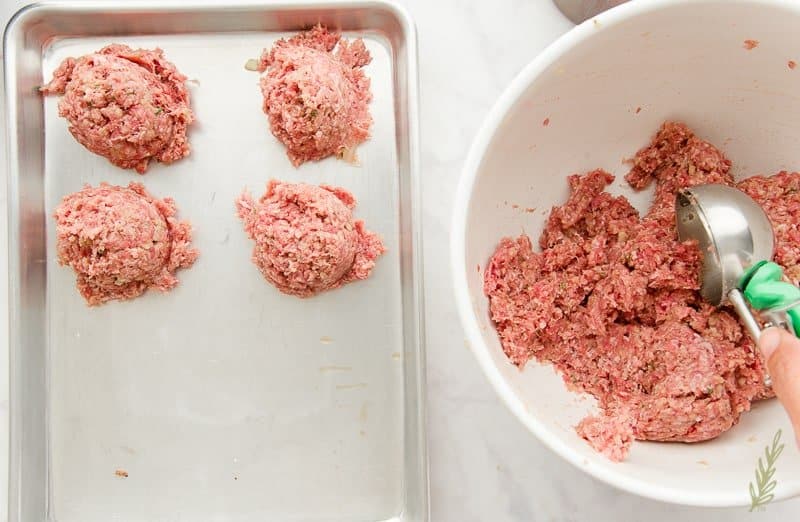 Above all else in my kitchen- I’m on a mission to save money and cook efficiently. A portion scoop is one way I achieve uniformly measured patties in the most time-efficient way. In addition to being a measuring tool, portion scoops do just that- scoop!

Scoop up the meat mixture with the portion scoop and drop it onto a sheet pan. 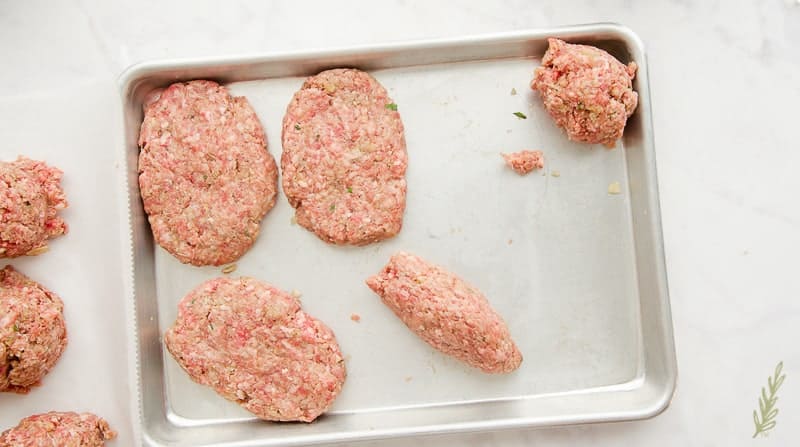 After scooping your meat, form them into a football. Finally, use the palm of your hand to press the football into an 1/2″ thick, oval-shaped patty.

At this point, you can wrap the patties well in plastic film and freeze them until solid, or proceed to cooking them. I make this meat mixture in bulk and freeze the patties in order to cut down on some of the prep work the next time I want to make Salisbury steaks. The meat patties freeze perfectly for up to 6 months. 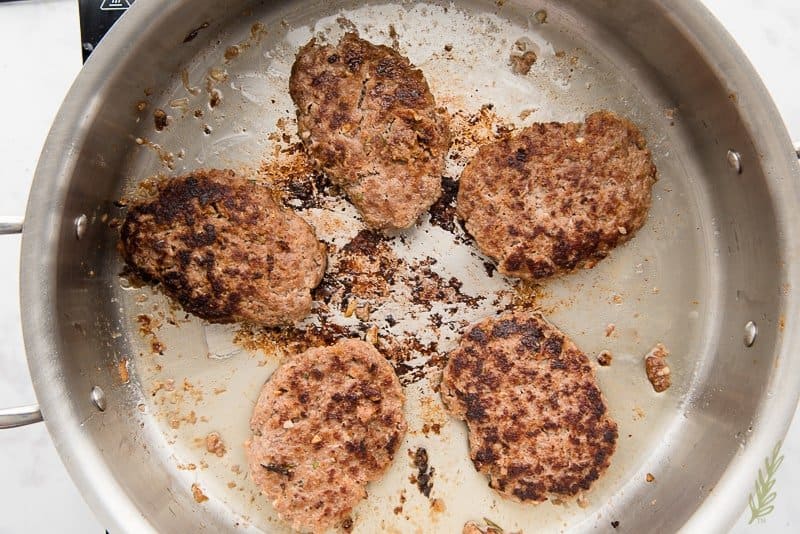 Once you’re ready to cook your Salisbury steaks, heat a tablespoon of vegetable oil in a skillet over medium-high heat. Press the patties into the pan and sear them on both sides- this should take about 4 minutes per side. Since the steaks are going to finish cooking in the gravy, you don’t need to worry about them being cooked all the way through right now.

Remove the patties from the skillet to a plate while you prepare the mushroom gravy. 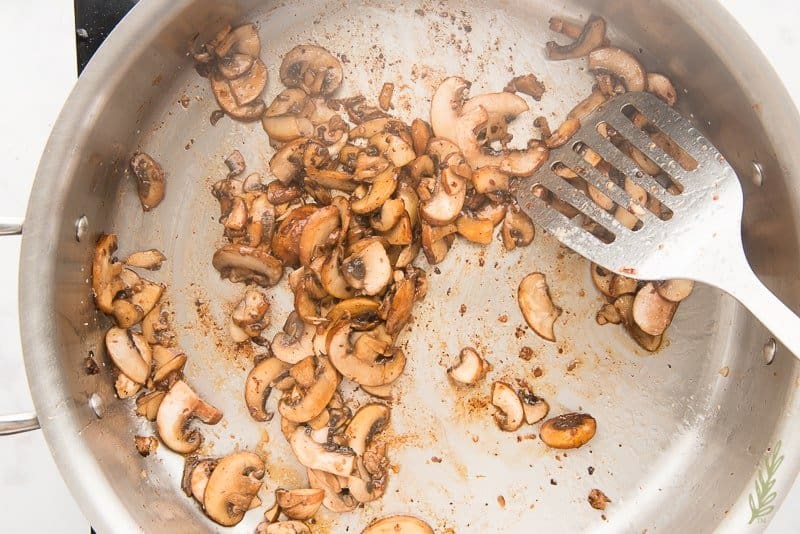 Drain off all but two tablespoons of the grease from the pan before decreasing the heat to medium. Add the sliced portobello mushrooms to the skillet and cook the ‘shrooms for 10 minutes, or until they are golden brown.

Sprinkle in two tablespoons of all-purpose flour and cook to create a roux. This roux is what we’ll use to thicken the mushroom gravy. Cook the roux for 3 minutes, or until it emits a nutty aroma. 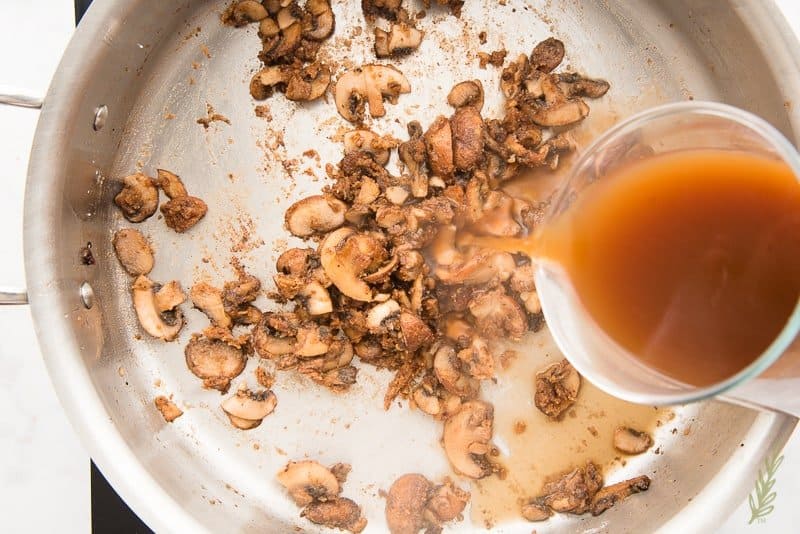 Pour in a cup of the beef stock and stir it until it forms a thick paste. This is a great way to prevent clumps from forming in your gravy. Once the paste forms, continue adding the stock in stages- stirring constantly- to develop a smooth liquid in the pan. The gravy will thicken as it cooks, so don’t fret if it appears a little thin at this point. 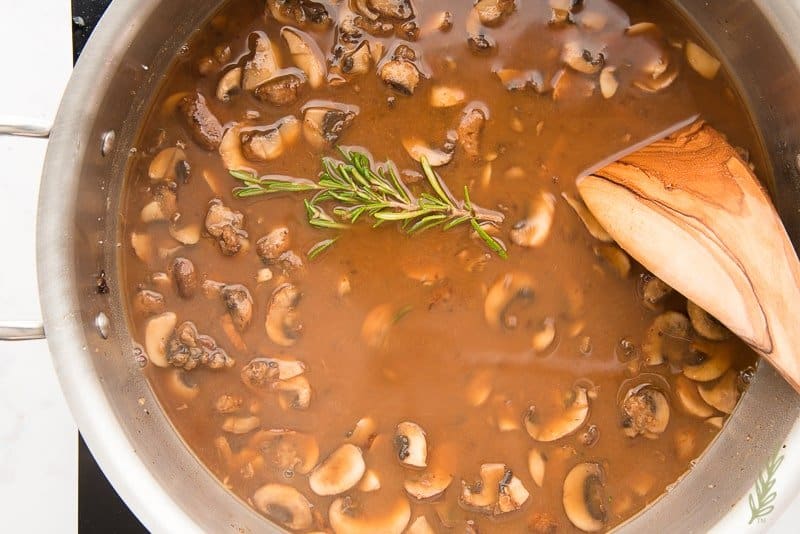 Add the remaining rosemary to the pan gravy, then allow the gravy to come to a boil. 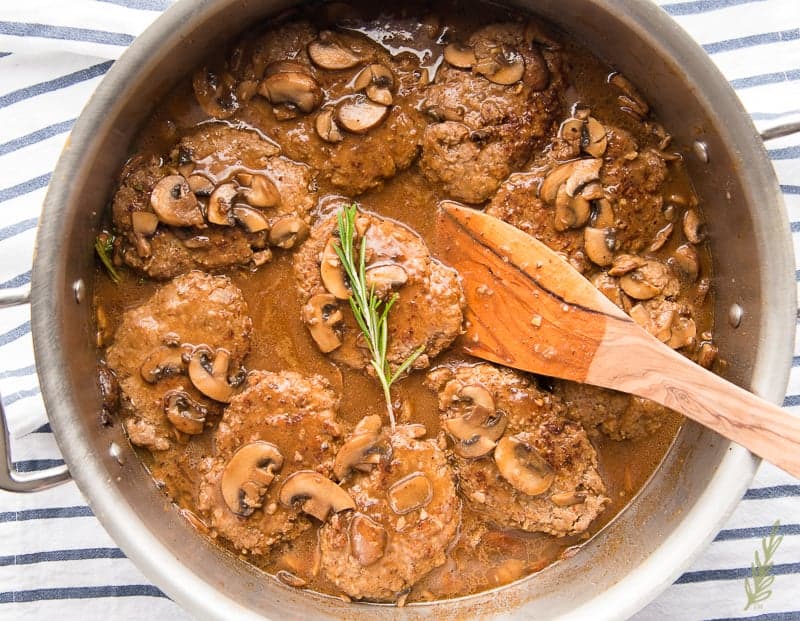 Decrease the temperature to a simmer and return the steaks to pan. Cover the pan and allow the patties to simmer over low heat for 10 minutes, or until the center of the patty reaches an internal temp of 160°F.

Your Salisbury steaks are ready to serve!

Serve with the perfect side to capture that gravy

Again, because my childhood memories are driving this train, I think the perfect side to serve with this Salisbury steak recipe is my Rustic and Rich Mashed Potatoes. Rice or grits are also good options. Mashed potatoes are classic, however. 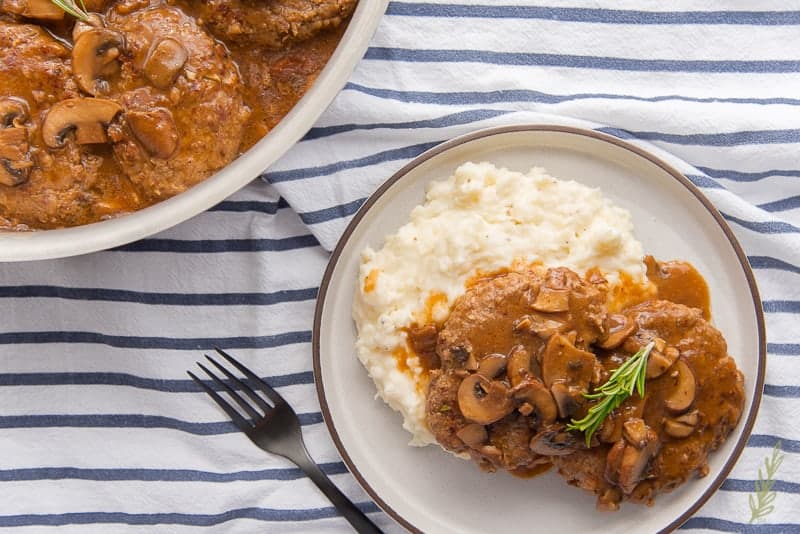 If you want a veg to round out a meal like this, you should keep it simple by serving either a garden salad or these Haricot Verts with Bacon.

The great thing about this Salisbury Steak Recipe 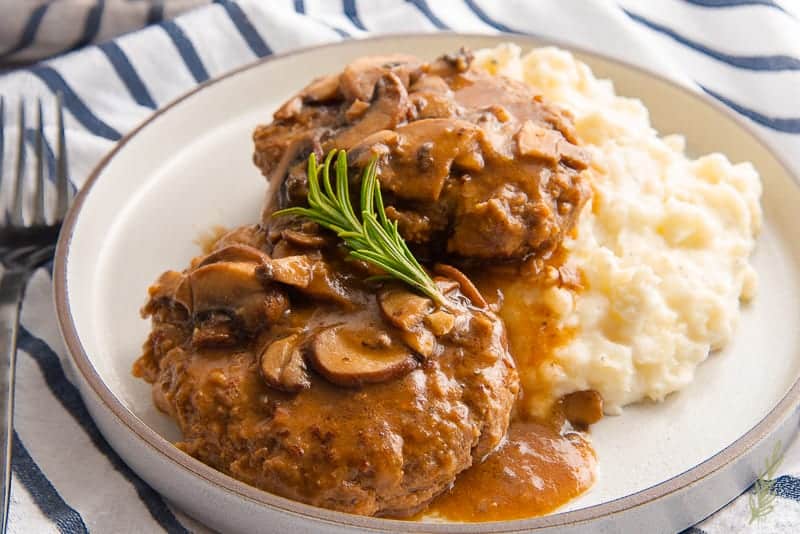 Because this recipe requires mixing and forming the ground meat, I prefer to double the recipe. Afterwards, I freeze half and prepare the rest, or I can make it all and freeze the prepared dish- gravy included. This is such a freezer-friendly meal that you’d be remiss not to use that to your advantage.

Serve it straight from the skillet and enjoy a taste of my childhood. I promise it’s the best thing my childhood has to offer!

Pin this recipe before sharing it with your friends and family. It’s a great go-to dinner on those hectic days when a little assistance in meal-planning is needed. 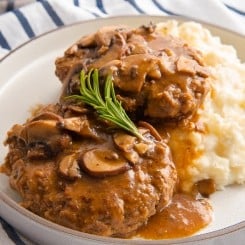 Form and Sear the Steaks 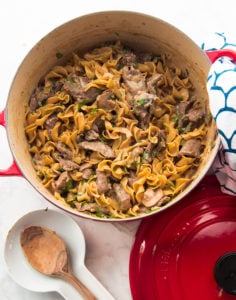 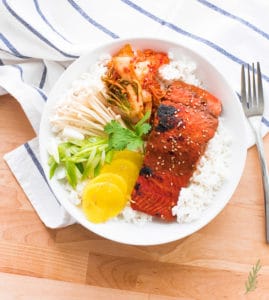 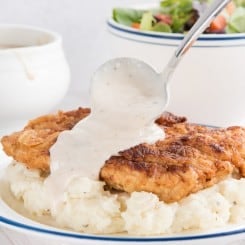 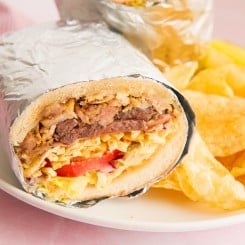 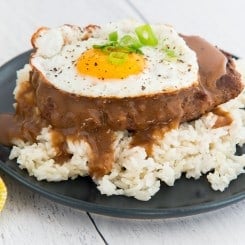 This was delicious!!! My family enjoyed it! (minus the mushrooms tho) The pictures along with the instructions made it super simple to follow!!! I really appreciated the step by step gravy tutorial- it came out perfect!!!

My mouth is watering just thinking about this. It is such a homey meal. The definition of comfort food.

It really is a comfort meal, you’re right!