January 5, 2017 by Marta Rivera
For the traditional shakshuka, omit the crostata dough, but life is so much richer with the flaky crust.
Get RecipePrint Recipe
243Shares 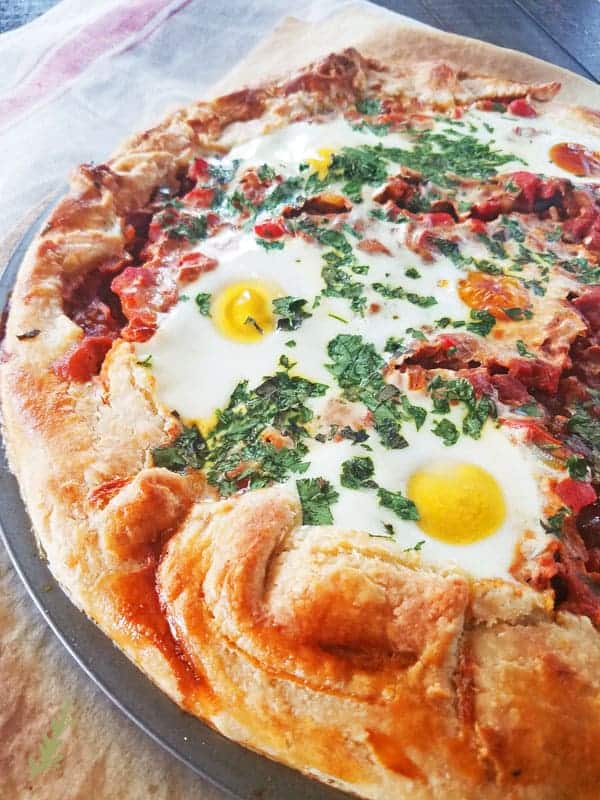 ‘Twas definitely a shakshuka type of day. The days following a New Year are very limbo-like around here. Not “How low can you go,” limbo, but “Wait. What day is it again?” limbo. We’re all walking around the house confused; the air is thick with anxiety and tension. Shakshuka is the cure-all…ok, not really. Shakshuka is more like the indulgence that allows you to forget about your worries, at least that’s what I think.

There are so many “to-do’s” that need to get done before my Soldier goes away on a mission, and I tend to want to get it all done now. When it dawns on me that I can’t, in fact, get everything done all at once; I start to whirl into this tailspin of despair, believing that nothing will get done before he leaves; then I’ll be stuck dealing with single-parenthood, loneliness, angst, and outright depression. It becomes a daily chore to focus on what can feasibly be done in the time I have left, and I have to try to avoid becoming consumed with the electives in life. Just typing this causes my anxiety to rise, but what can you do?

This lifestyle- the military spouse deal- has never been something I thought I would be doing. Like, ever. I grew up in a very strict military environment. Some children, albeit less children from the States nowadays, grew up in military boarding schools. The boarding school I attended was run by Mami and Dad. There’s something to be said about being raised in a dual-military household. Something I haven’t quite figured out yet, but something nonetheless. There’s even more to be said when both of your parents were Vietnam Vets. One of them a Vietnam Vet with three combat tours under his belt. Something to be said indeed. So, no, military family member was not something that I wanted to be addressed as. Let alone, “Military Spouse.”

And yet, here I am on the cusp of yet another “Military Spouse thing”. THE military spouse “thing”. The “thing” none of us cares to do, but that all of us must do at one time or another. The “thing” that sits at the dining room table with us mocking me while I relish the family time. It whispers to me, “Don’t savor it too much. In a month he’ll be gone.” It’s the same “thing” that turns a rogue sock-on-the-floor into a three hour argument about how he doesn’t appreciate a damned thing I do around here!! That “thing” that beckons you to your child’s door, only to hear them sniffling deep beneath their quilt willing themselves to, “Just be brave and not let them hear you cry.” That stupid “thing”. That “thing” pisses me off. But, it’s the “thing” I agreed to deal with when I agreed to him. So I deal.

Dealing isn’t always pretty, though, and it isn’t always grace-filled. Dealing is, at least for me, trudging through the days of the countdown with a determined look on my face and sheer agony in my heart. It sometimes lashes out in anger, more often than not cries silently in the bathroom with the exhaust fan on so that the same kids who hide their tears, in their own attempts to be brave, don’t hear Mommy cry as she attempts the same. How easy it would be if we weren’t all trying to be strong for one another.

Comfort food, at least to me, has an uncanny ability to make you circumvent pain, sadness, depression…

That’s why it can cause such an obstacle for those who struggle with eating disorders. It genuinely brings a comfort to your soul that, seemingly, helps you to forget about the state of your affairs- present issues included. In fact, I’ve know deploying Soldiers to request “Last meals” from their loved ones. Not in the macabre sense of a “last meal”, but in the, “I’m not going to get to taste this for x-amount of months,” meal. My Soldier is no exception. I indulge him shamelessly. Even the normal, “You can’t eat all that! You have PT!” rule gets chucked out of the window. He’ll be in the desert. He’ll lose the weight. Too much weight, and then I’ll feel like a horrible wife and over-feed him when he gets back. It balances itself out. So, I feed him. In the meantime, I feed myself as well.

Shakshuka is that comfort food. It’s actually a very healthy comfort food, so indulging in it isn’t as guilt-ridden as say, my hot chocolate, but it’s a warm hug from Bubbe. No, I’m not Jewish, but if I was Jewish, my Bubbe would be who’d this hug would come from. Shakshuka, I found in my research, is actually a North African dish. One reader on my Facebook page told me it was originally from Tunisia. I told her, “Well, I’m going to thank God for Tunisia right now!” It’s a gift, shakshuka is. But, I found the origins much later than the recipe itself. I, for one, thought it was an Israeli dish, as the woman who taught me how to make it was originally from Haifa. Regardless of its birthplace, I now consider shakshuka a part of the family, and as such it must accompany me on emotional journeys and bring comfort to us when we need it. So, shakshuka was made this week.

The first time I tried shakshuka, I fell in love. I, also, find that to be the reaction of everyone who subsequently tastes it when I make it. My children ask for it by name, which is odd to me. Odd, but understandable.

Traditionally, shakshuka is spicy, served for breakfast and prepared sans bread. You would normally scoop the mixture onto your accompanying bread and enjoy it as an indulgent “dip” for lack of a better word. My situation called for a little bit more “stank on it”, if you catch my drift. I needed something truly decadent to match the emotional state I was in. Breaking with the kosher norms of the shakshuka I was taught, I added a flaky pie dough to the recipe to create a shakshuka crostata. Indulgent, indeed.

Shakshuka is the “hangover cure” for many a Middle Easterner/North African. Rightfully so. It’s filling without being heavy. Well, mine was heavy for me, but that’s because I damn near ate a quarter of it by myself. Sadness, y’all. I was sad. But normal people’s consumption of shakshuka shouldn’t be heavy at all. Spice level is well within your control as well. I don’t make mine very spicy because the Twinks have delicate (read: wimpy) palates. If you can’t take the heat…just don’t add any cayenne. You can also opt out of the crostata all together and serve it the traditional way. Slice up a crusty loaf of bread and top it with a spoonful of the tomato and egg mixture. I like this rye with shakshuka, personally.

Shakshuka is the perfect solution to the “things” in your life. My “thing” is coming fast and mercilessly, but I’m ready to face it. Happy about facing it? No, not so much, but face it, I shall.

Tell, me, what’s your favorite comfort food? You know, the ones who help you deal with your “things”? Share in the comments below. 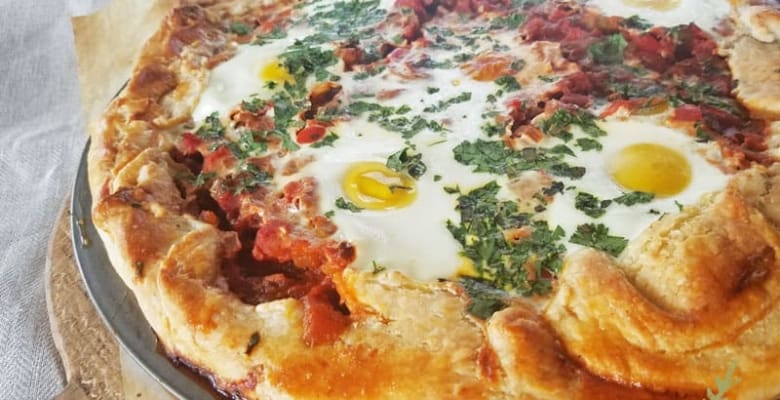 The traditional shakshuka is baked in a cast iron skillet without any dough at all. If you would like this version, simply omit the pasty dough and follow the recipe as directed. Serve with a crusty loaf of rye or a slice of a French baguette.
Course Brunch
Cuisine Middle East/North Africa
Tried this recipe?Mention @senseandedibility or tag #senseandedibility!
243Shares