November 9, 2020 by Marta Rivera
All you need to make a wholesome, delectable cinnamon applesauce is your slow cooker and a blender.
Get Recipe
116Shares 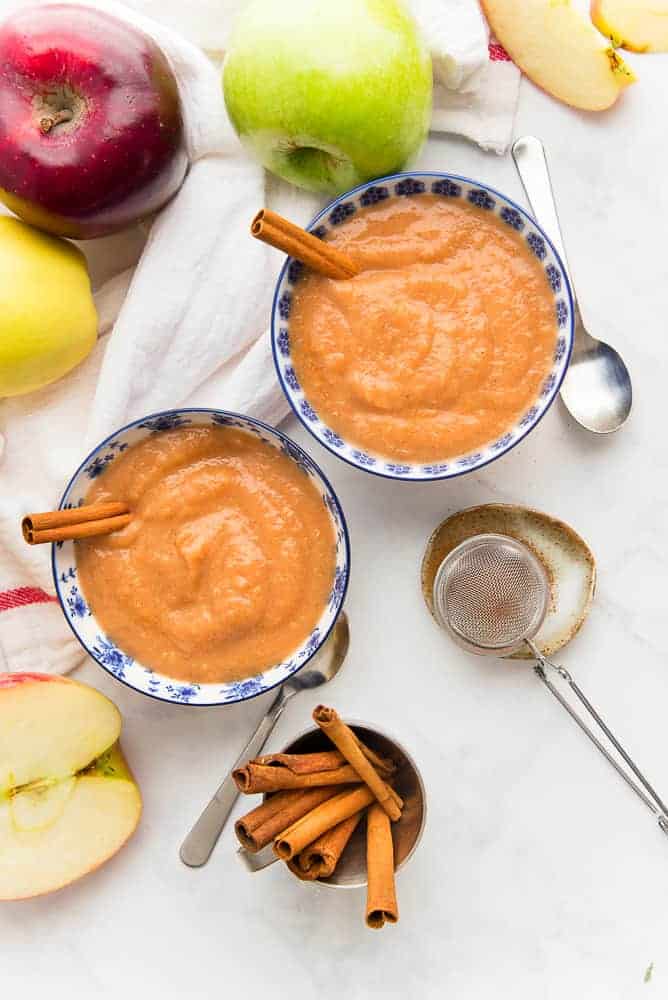 Let’s whip up a quick side dish to serve at breakfast, brunch, lunch, dinner, or dessert. With minimal effort and the kitchen workhorse known as the slow cooker, this warmly-spiced Cinnamon Applesauce can be the side dish of your dreams.

When it comes to figuring out how to round out a meal, you can’t beat a fruit sauce. Growing up, my mother used to serve applesauce with pan-fried pork chops. I thought we were the weirdest family ever because I never saw it on the dinner tables of the TV families I watched. After moving away and going to culinary school, I realized how advanced my mother’s palate was. Turns out that pork with apples are a well-known pairing. As a mom of twins, I always turned to applesauce to balance the kiddos meals. Now I want to share my easy, hands-off recipe with you.

What’s so great about this Slow Cooker Cinnamon Applesauce?

Besides the fact that this recipe is so easy to make, it’s inexpensive. You need only a few pounds of fresh apples and your preferred spices. You can omit the flavorings as you please or double them to create a more flavorful sauce.

One thing about this recipe that I find especially appealing is that I can use it to balance every meal of the day. When the twins were babies, applesauce was their favorite snack. Still, I stir it into oatmeal, cream of wheat, and rice cereal to up their fruit intake. As my mom did, I serve it with pan-fried pork chops. And there’s nothing quite like applesauce on a warm slice of poundcake for an easy dessert.

It’s insane how easy this recipe is to make. That alone makes it great. Plop chopped apples into the slow cooker after tossing them in sugar and spices and turn it on. After a few hours, stick an immersion blender in there and whirl away. You have enough applesauce to last a week. You can’t get any better than this.

What do I need to make this recipe? 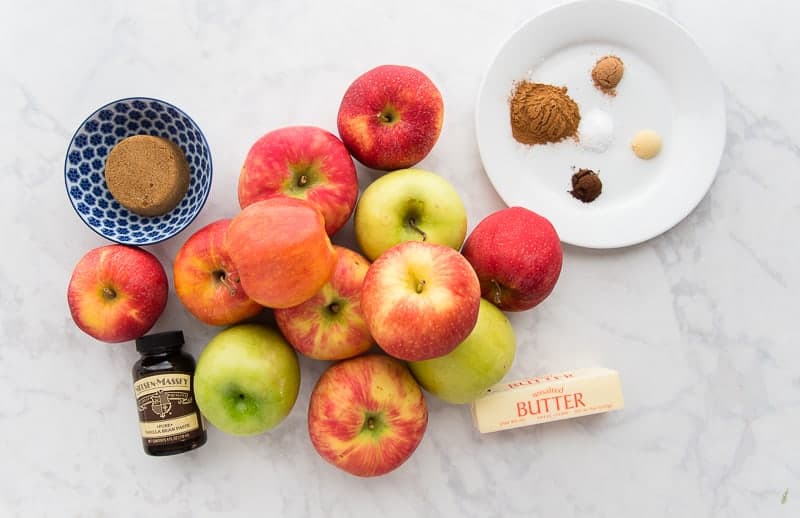 All you need to make this recipe are apples and ground cinnamon. Seriously. It’s that simple to prepare this slow cooker cinnamon applesauce. Now, is that all we’re going to use? No. Since you know me better than that, you know I’m all about flavor. So, in addition to the apples and cinnamon, I want you to grab dark or light brown sugar, vanilla, ground nutmeg, ground ginger, ground cloves, a little salt, unsalted butter, and apple cider vinegar (or fresh lemon juice).

Of course, you need a slow cooker. An immersion blender is super helpful, but a food processor or blender will work in its place.

What kind of apples are best to use in Cinnamon Applesauce? 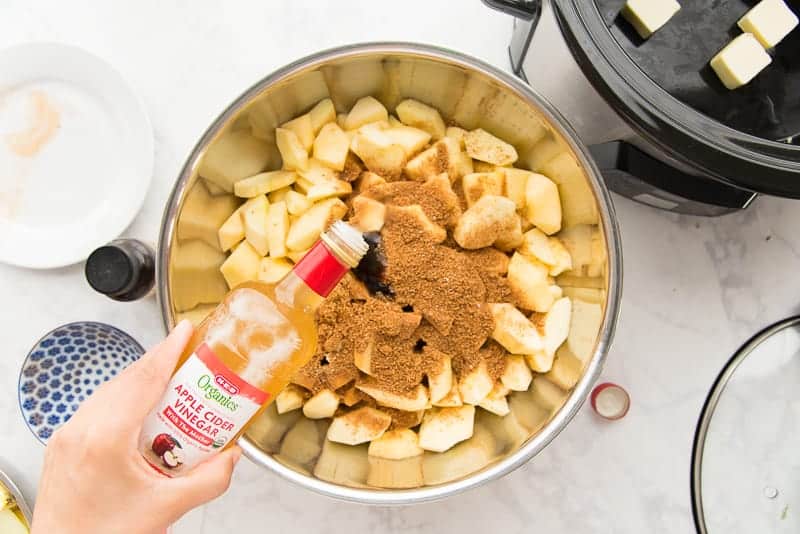 First things first, you need to gather your apples. Because I’m a fan of layers of flavor, I mix up the apples I use in my cinnamon applesauce. Rarely do I use plain red delicious apples. Since they don’t have much flavor, I hardly ever bother with them. Granny Smiths, Gala, Honey Crisp, and Golden Delicious are the apples I prefer to use in this recipe. You can use one variety or a mix like I do. If you only use a tart apple, like Granny Smiths, you need to increase the amount of brown sugar you add to the recipe. Because they’re so tart, you need more sugar to balance it.

Peel and cut your apples into large chunks- about 1-2 inches big. Once they are cut, throw them into a large mixing bowl.

In addition to the spices and sugar, I add a small amount of apple cider vinegar. Apple cider vinegar cuts through the apples’ sweetness and balances the overall flavor of the finished applesauce. Lemon juice works the same as apple cider vinegar if you don’t have the latter. And we can’t forget to add vanilla bean paste (or extract). No cinnamon applesauce is complete without it.

Toss the apple chunks in this wonderland of sugar, spice, acid, and vanilla until they’re thoroughly coated.

How do I make cinnamon applesauce in the slow cooker? 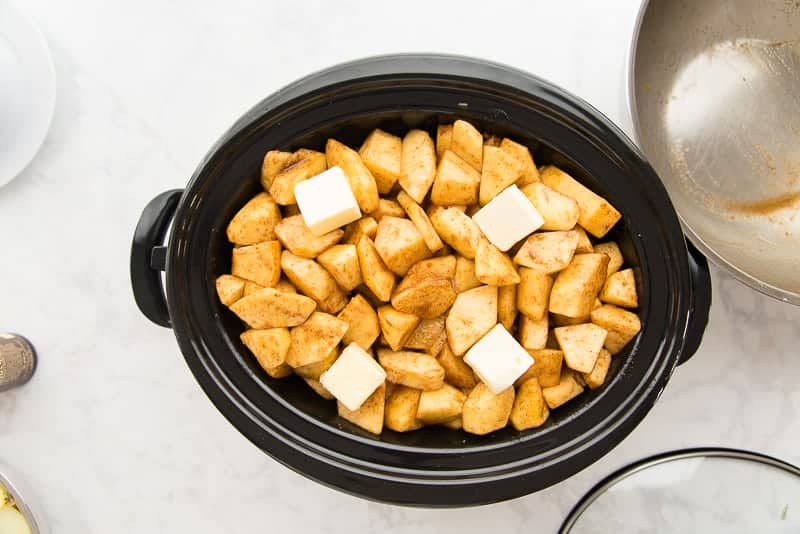 Top the butter with the sugared and spiced apples, then dot the top with a few more tablespoons of butter.

The key to making deliciously smooth cinnamon applesauce in the slow cooker is to not add any more liquid than necessary but, instead, take a little help from the butter and the juice the apples will produce as they cook. A large enough slow cooker is also essential. Mine is a 6-quart. If you have a smaller one, divide the recipe in half to accommodate it.

Nothing else needs to go into the slow cooker, save the spiced apples and the butter.

How long do I have to cook the apples? 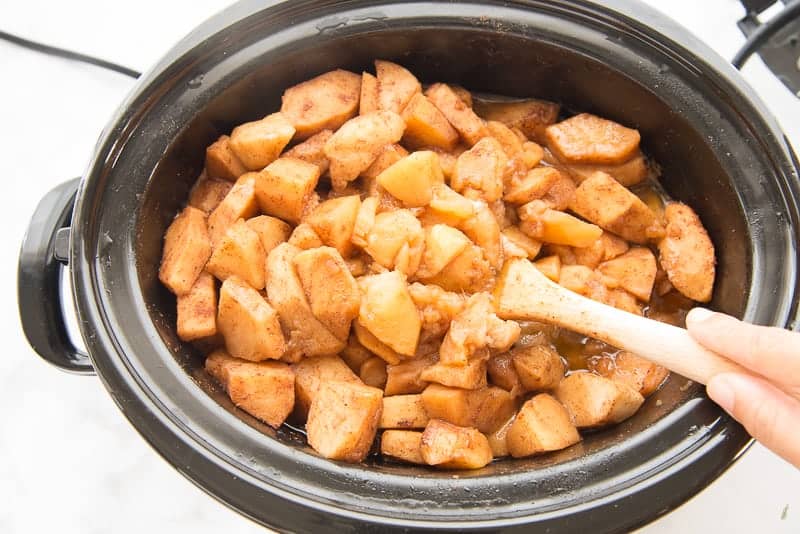 Depending on how long you have (or how impatient you are), you can alter this applesauce’s cooking time.

Because I work and teach from home, I get the cinnamon applesauce going mid-morning, so it’s done by dinner time. Cover the slow cooker and set it for 8 hours on low if you’re like me. If not, and you want it to cook faster, set the slow cooker on high for four hours.

Either way, if you remember to, give the apples a stir once or twice as they cook. Stirring isn’t a must, but if you’re around, it’s a good idea.

Do I have to use a slow cooker?

Not at all! I was too cheap to buy a German slow cooker, and using my 110v would’ve blown more than a few fuses, so I always made my cinnamon applesauce on the stovetop.

The major difference between making it in the slow cooker and on the stove is that you can’t leave it puttering away for hours unattended. You also need to add all of the butter to the bottom of the pot, before adding the apples. Bring the apples up to a simmer over medium heat. You’ll see steam come up from among them. Once the simmering starts, cut back the heat to low and cover the pot.

Simmer the apples for an hour, stirring every 15 minutes. When the apples are soft and break apart easily, you’re ready to puree.

What’s the easiest and safest way to puree apples for the applesauce? 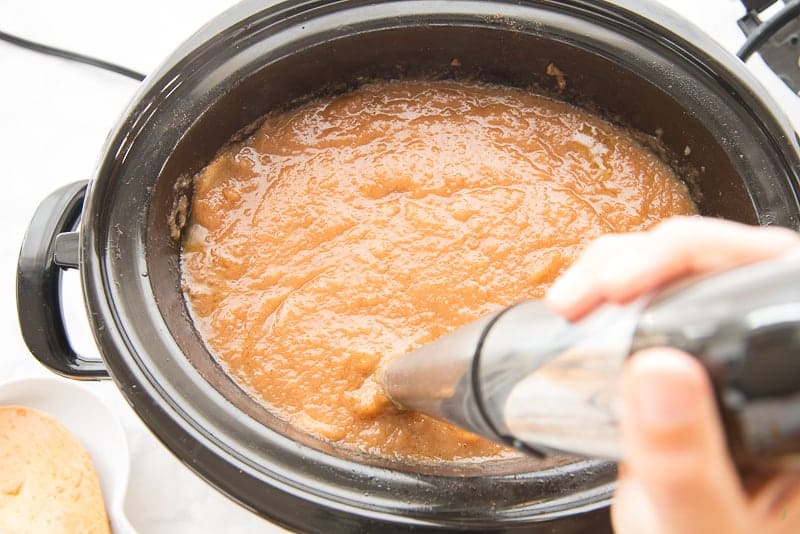 The safest way, hands down, to puree the cinnamon applesauce is with an immersion blender or, at the very least, a food processor.

I prefer the immersion blender because I don’t have to worry about transferring molten-hot applesauce to a blender. If all you have is a blender, I suggest moving the apples to the blender in small batches. Don’t forget to vent your blender’s cover- just remove the plastic plug in the center of the lid and cover that hole with your kitchen towel. Blend the apples in batches until they’re smooth. Same if you’re using a food processor. Go slow, work in batches, and vent the lid.

If you have the immersion blender, it’s as simple as sticking in the stick and pureeing until smooth. Make sure your blender is set at the lowest speed. I know firsthand the trauma of starting to blend on high speed and being assailed with searingly hot applesauce. Not. Cute.

How do I serve Slow Cooker Cinnamon Applesauce? 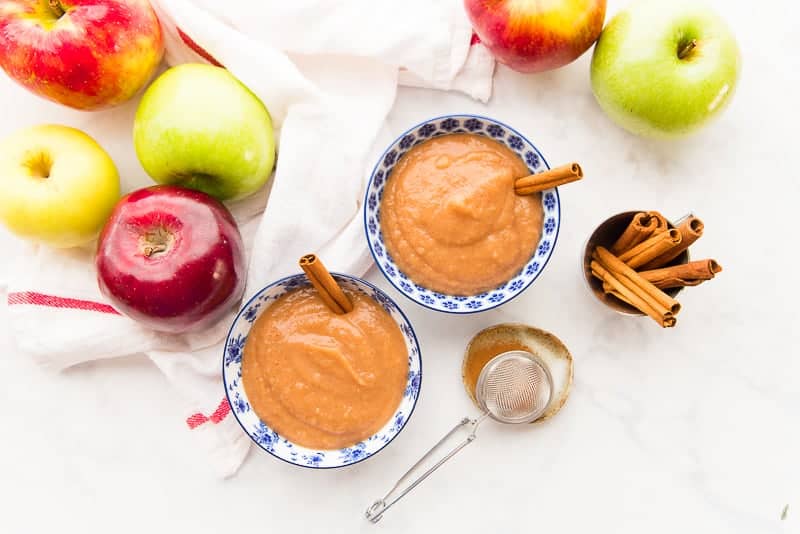 Just like that. Spoon the warm or cooled cinnamon applesauce into bowls and hand your diners a spoon. Cinnamon sticks are totally unnecessary, but I gotta do it to keep you committed to me.

Applesauce goes well on toast, swirled into oatmeal, spooned over poultry, or as a topping for ice cream. My kiddos eat it in the morning spread over their pancakes. I’ve taken to folding it into waffle batters, bread dough, or in cheesecakes. Yep. Cheesecakes.

Can I freeze it? 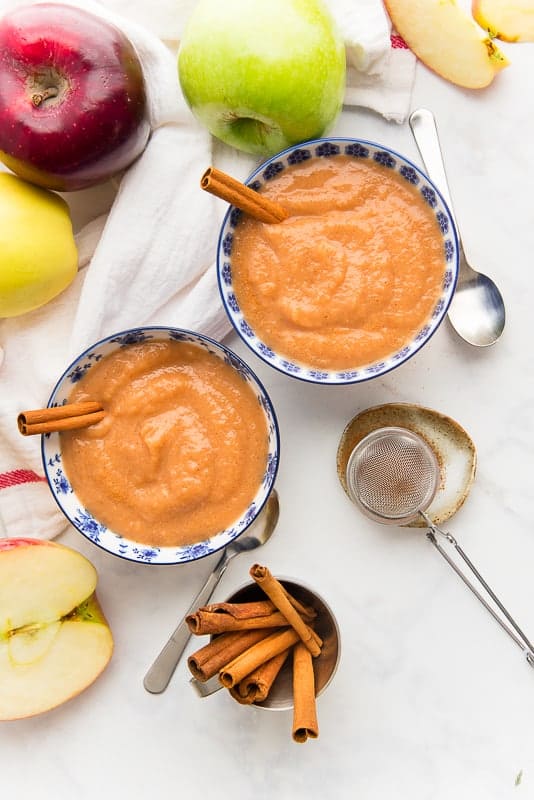 Freezing the slow cooker cinnamon applesauce is as easy as letting it cool to room temperature and scooping it into freezer storage bags. Press out any excess air and freeze it for 6 months.

When you’re ready for it, put it in the fridge to thaw. If you froze it laying flat, it should only take 45 minutes to an hour to thaw. Serve it as you please.

How long does applesauce keep? 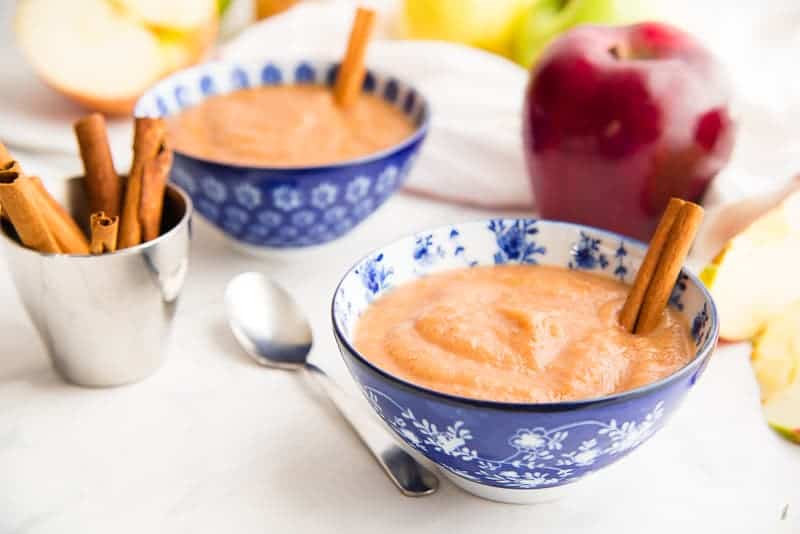 This applesauce keeps in the fridge for a week- if it lasts that long. Just keep it in a covered container. I transfer mine to quart-sized mason jars and pop them into the fridge.

It’s important not to go dipping into the jars with spoons that have other things on them. My kids love scooping out their applesauce with the same spoon they served their yogurt with. It takes all I have not to string them up by their toes when they do that crap. It’s best to use a fresh spoon to scoop out the applesauce. But, you probably knew that. Clearly, I’m raising savages.

What other recipes can I use this Slow Cooker Cinnamon Applesauce in? 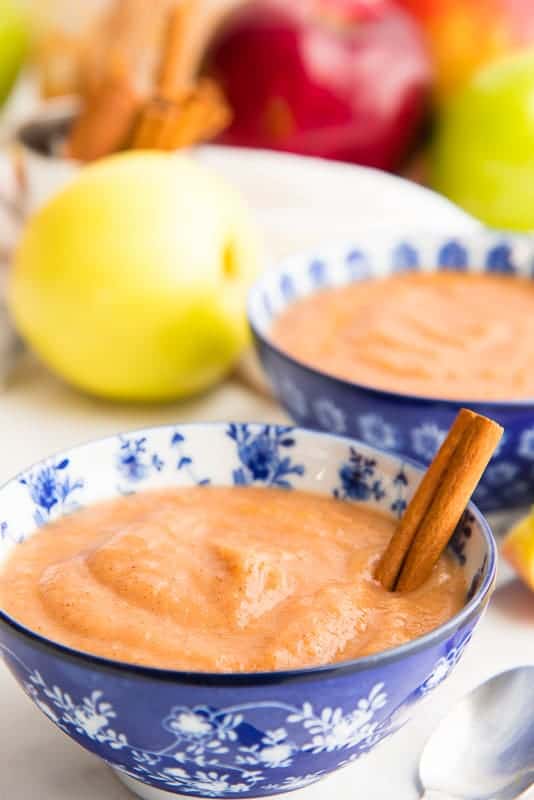 Use this Slow Cooker Cinnamon Applesauce to make this Apple Orchard French Toast Bake or for topping these Puffed Potato Pancakes (or Puffy Latkes).

Again, on its own or as a topping, it’s utterly delicious.

Make sure you pick up an immersion blender and make this applesauce. Don’t forget to pin it to your side dish board and share it with your friends, too! 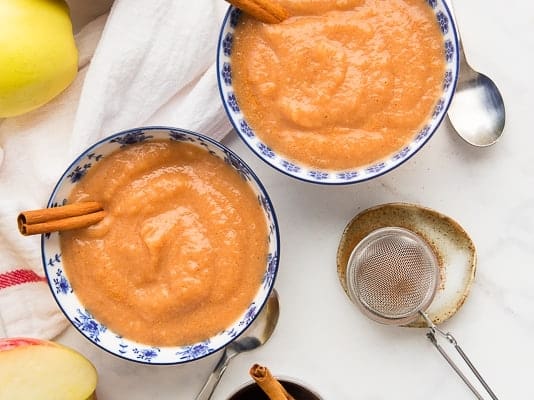 Puree the Applesauce and Serve

*an ideal blend of apples are Granny Smiths, Gala, and Honey Crisp

If you don't have a slow cooker, or would like to prepare this applesauce on the stovetop: 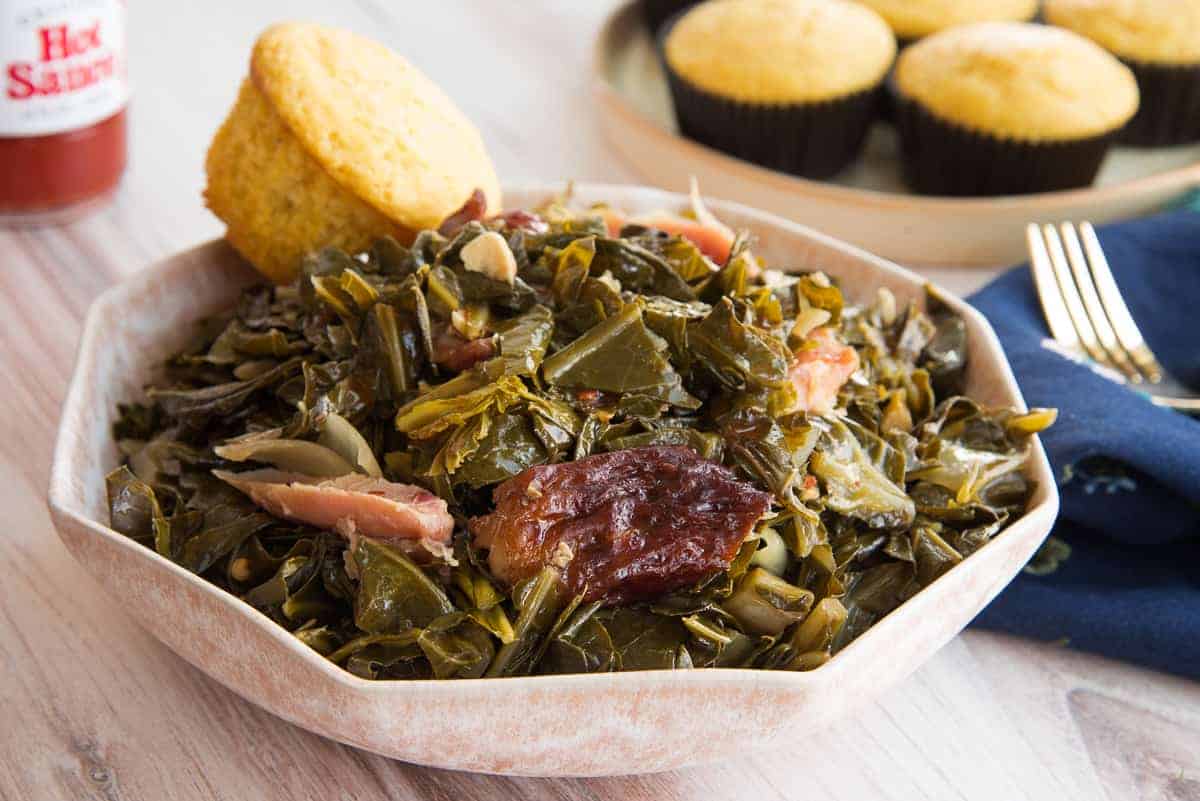 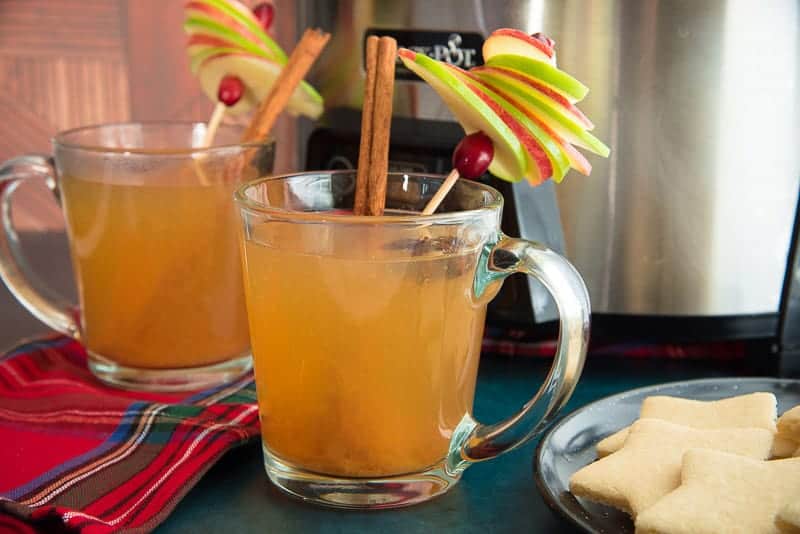 This is a delicious idea! Not only for a yummy treat, but your house is going to smell amazing also!

Yes!!! It smells like an apple orchard whenever I make it.

I haven’t been cooking as much I’d like these days but this looks simple and delicious, I might try it!

Let me know what you think!