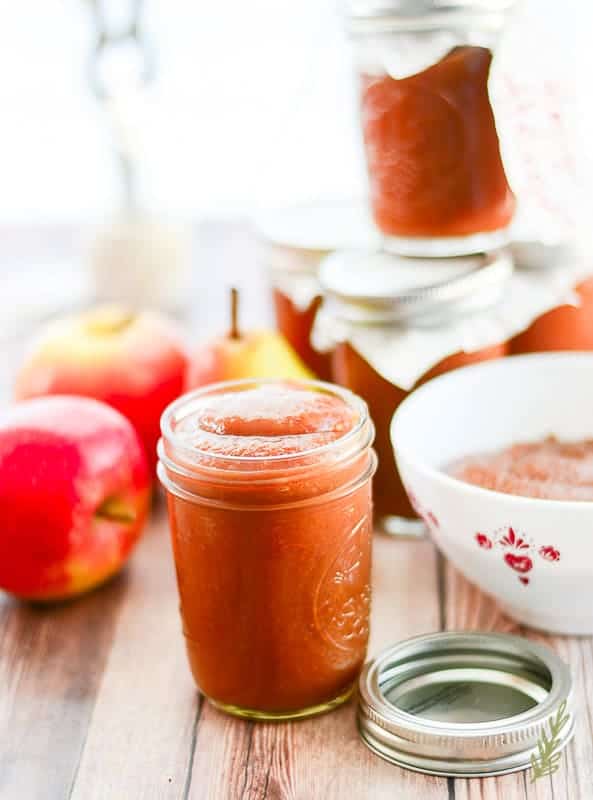 If you’re like me, at this moment in time, you don’t have a dollar to spare. I’ve managed, as I always find time to do, to wait until the last minute to get the holiday ball rolling. Military life brings with it holiday balls, holiday parties, holiday everything. It doesn’t, however, bring holiday cash. A quick perusal of our Christmas gift lists- the many nurses, sanitation workers, the mail lady- everyone, it seems, is on the list. Not the orthodontist, though, because my gift to him was my doggone money! I need to be smart about how much money I’m spending. This is where being a food blogger comes in handy. Nothing says, “Thanks for picking up my 18 bags of garbage,” quite like a gift from the kitchen. This apple-pear butter is the perfect way to share a bit of your heart with those who makes life easier- while sparing your wallet a shock.

Let’s get to it because these Holiday gifts won’t make themselves. 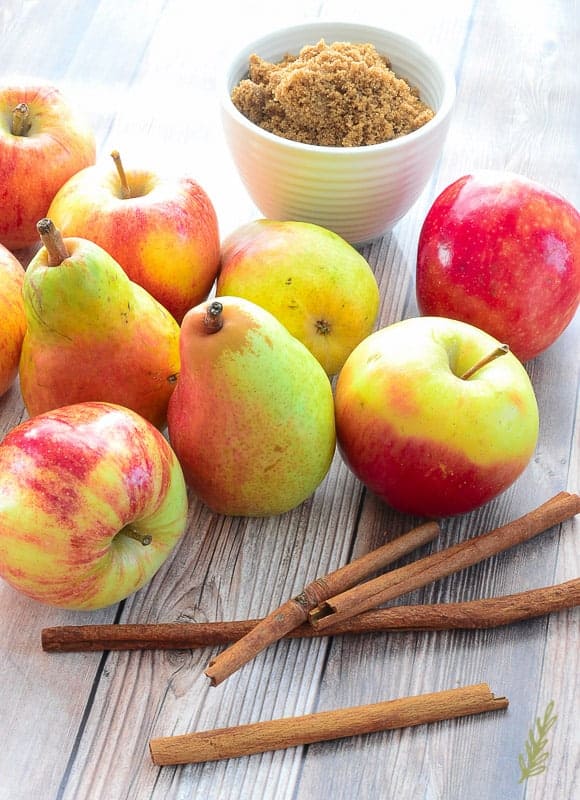 You won’t be surprised to find out that apple-pear butter is comprised, mainly, of apples and pears. What may shock you (because it sure as heck shocked me), is that this apple-pear butter contains a respectable amount of apple cider vinegar. I know, right? It’s that vinegary tang that makes this apple-pear butter a staple in my home. My kids love to spread it on their bagels and toast. The Soldier’s infamous Sunday morning pancakes are often the recipient of healthy slather as well. On occasion, I, personally and unabashedly, have been known to spoon it right into my gullet. Spices such as cinnamon and ginger are all that flavor this apple-butter. No need to muddle up the flavors of those perfectly ripened fruits, is there? 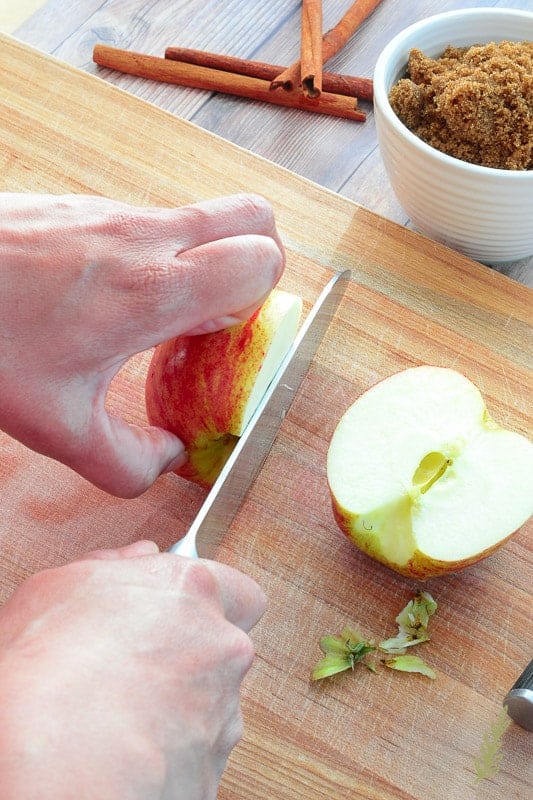 Now, I’m not an apple snob.

Ha! Who am I kidding? I’m a total food snob in every sense of the word. And you know what? I’m okay with me. HERE, in this particular recipe, I’m not an apple snob. When making this apple-pear butter, I do tend to gravitate towards Gala or Honey Crisp, however. I’d suggest avoiding the über-tart Granny Smith’s because the combo of that, with the vinegar, makes for a bad pucker factor. Courtlands, Braeburn, Fuji, or Macintosh are where you want to stay. These are all sweet-tart apples, so the balance of the sugar added with the vinegar make them perfect for overall taste. Red and Golden Delicious are both too sweet for this application, so just save them for snacking on.

How I dispatch the apples: I wash them really well, and cut the apple in half. 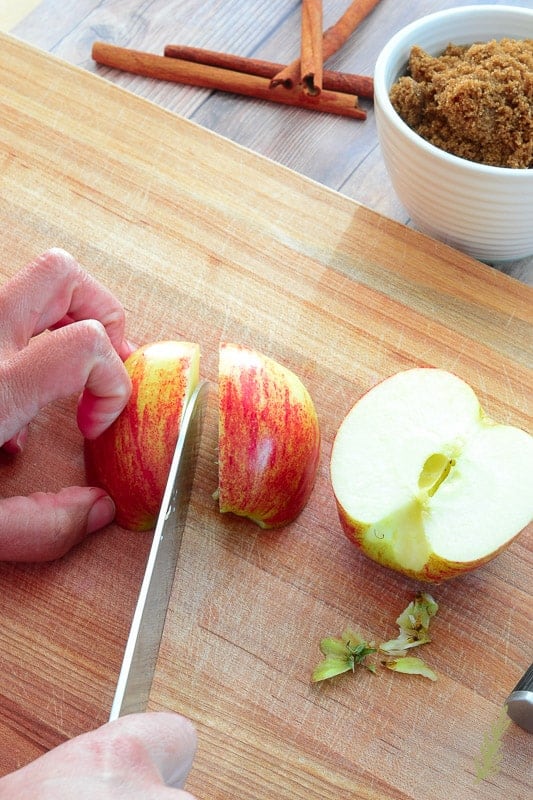 Then, I turn each half on to its flat side and cut it in half again. 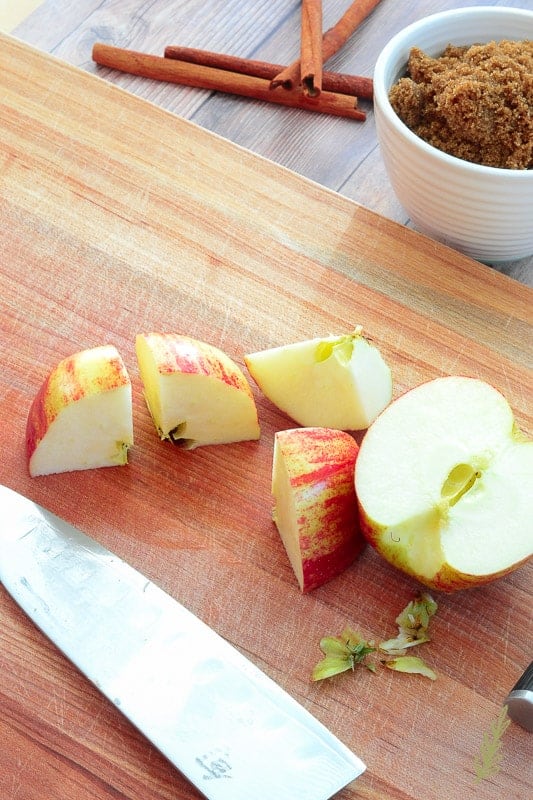 Now, each quarter gets cut into eighths. No need to peel, core or anything like that. Well, I do remove the stem and the calyx, actually. Why leave the seeds and peel? If you’ve ever spoken with a canning pro, you have heard that fruit seeds contain pectin. Pectin is what thickens things like jellies, jams, and (luckily for us) fruit butters. Since I like to avoid using anything that won’t contribute to the flavor of my recipes, I need that pectin from those seeds and peels to thicken my apple-pear butter. No, you don’t taste anything funky…unless, of course, you mean funky-fresh. Then yes, there’s loads of it.

Now put the chopped apples into a pot with a heavy-bottom. A dutch oven works perfectly for this if you’re choosing the oven route (we’ll talk more about that in a minute). 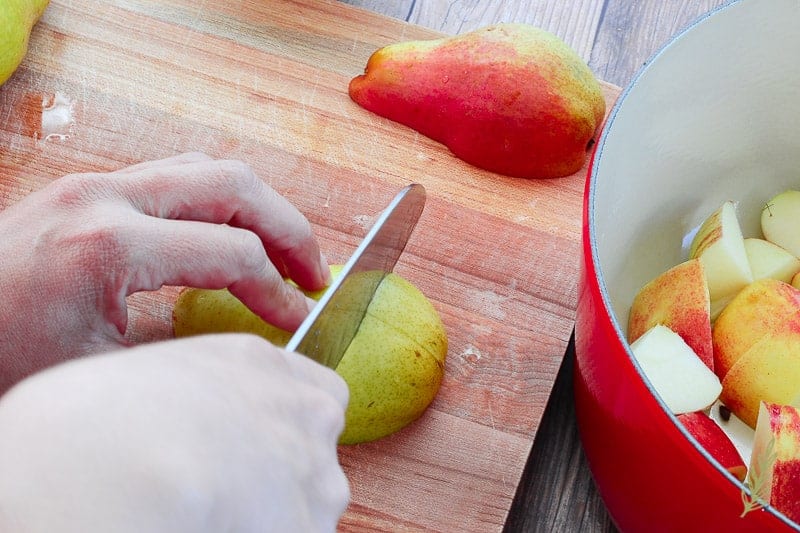 The pear in our apple-pear butter is a Bartlett, but I also like using Bosc or red Bartletts. It’s prepared the same way as the apple. Simply slice it into eighths. Toss the pears into the same heavy-bottomed pot that you threw the apples into. 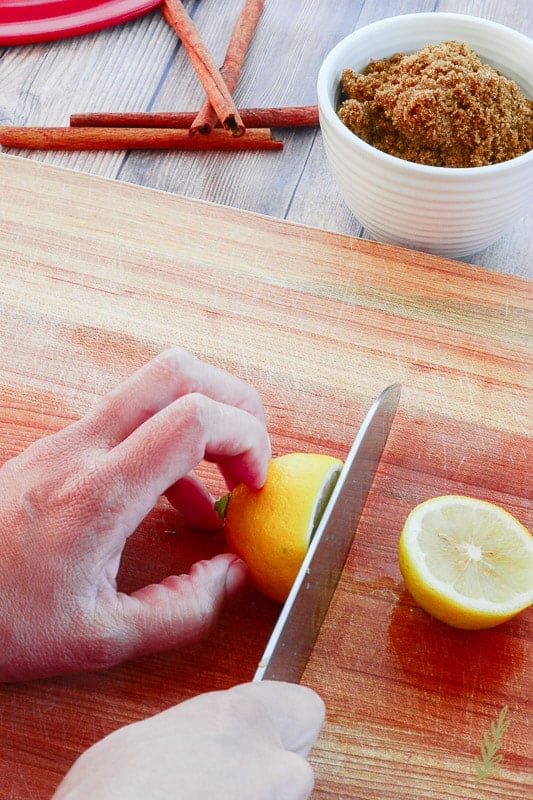 Since we already have our cutting board and knife out, let’s go ahead and cut the lemon we’ll use later in half. Just set it aside for now. 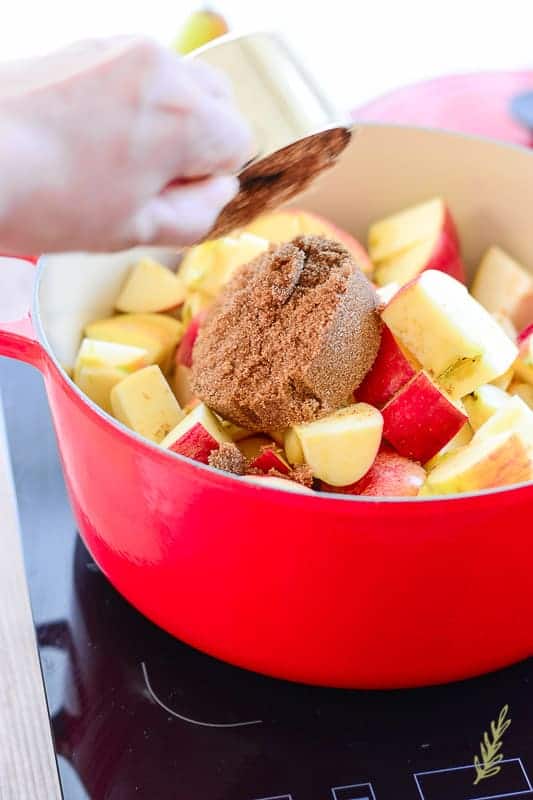 Now that all of our cutting is out of the way, we can begin cooking our apple-pear butter. Add the brown sugar to the apples and pears. 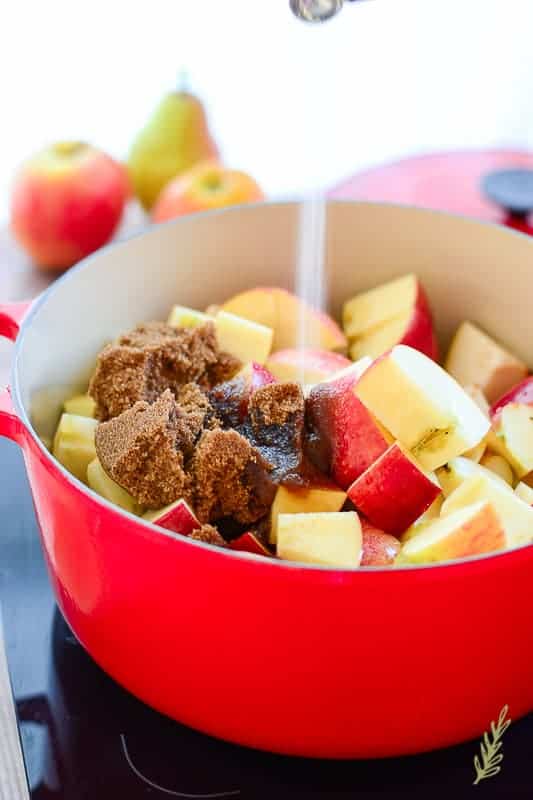 Follow that up with the salt. Surprisingly, salt does not always make a dish savory. In fact, salt is used so often in desserts because it amplifies the sweetness of the sugars present. Ever heard of someone describe the taste of a dessert as, “Flat”? I guarantee it’s because the cook didn’t add salt. A pinch of salt does wonders. So, you go on ahead and be wonderful. 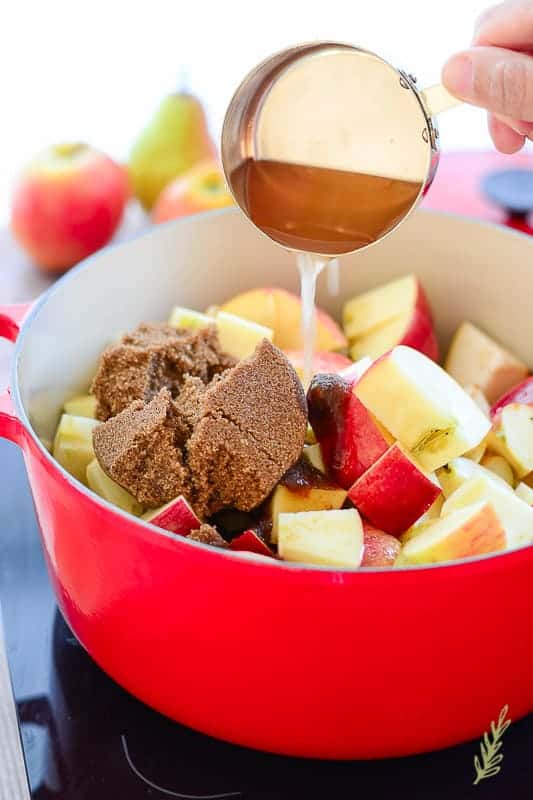 Now for the unsung hero in my butter. Apple cider vinegar. This ingredient is actually a hold-over from when I used to be a doomsday prepper. Ha ha!! I really wasn’t, but I was dead-set on making everything I could at home. I won’t bore you with the chemistry, but the vinegar helped ensure that I wasn’t going to kill my clan. Realizing we went through this stuff so fast that canning wasn’t worth the effort; I no longer needed to worry about the PH balance and all that. However, the taste had been acquired for that vinegary tang, and my family and I were hooked. Also, without the added vinegar, it’s just applesauce and where’s the fun in that? The vinegar had to stay for us, but it’s a matter of preference. In addition to the vinegar, I add an equal amount of plain apple cider.

Add the vinegar and cider to the apple-pear pot. 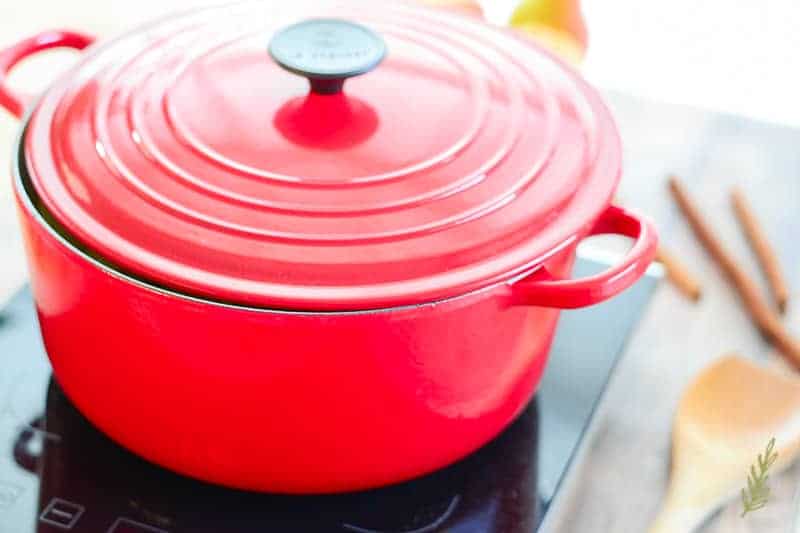 Bring the mixture in the pot to a boil and reduce the heat to med-low to allow the apples to simmer for 15 minutes. Place the lid on, partially, to allow for a bit of evaporation. Stir occasionally to prevent the apple-pear mix from sticking to the pot’s bottom. 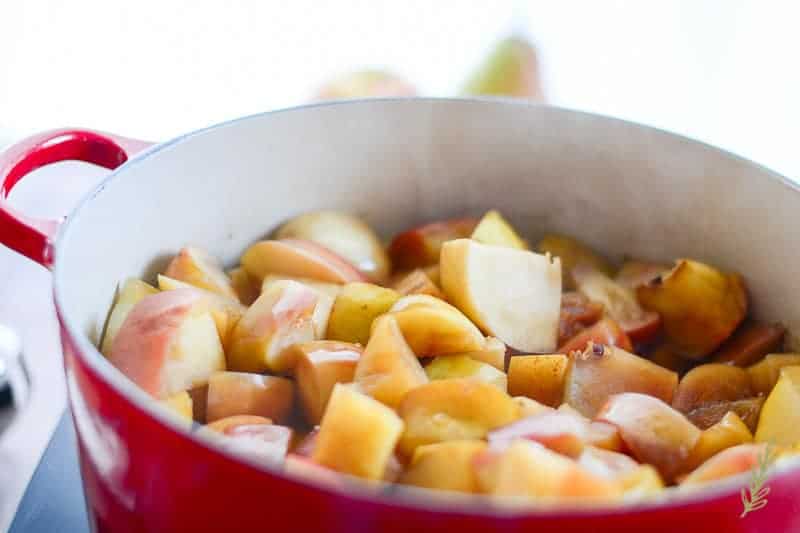 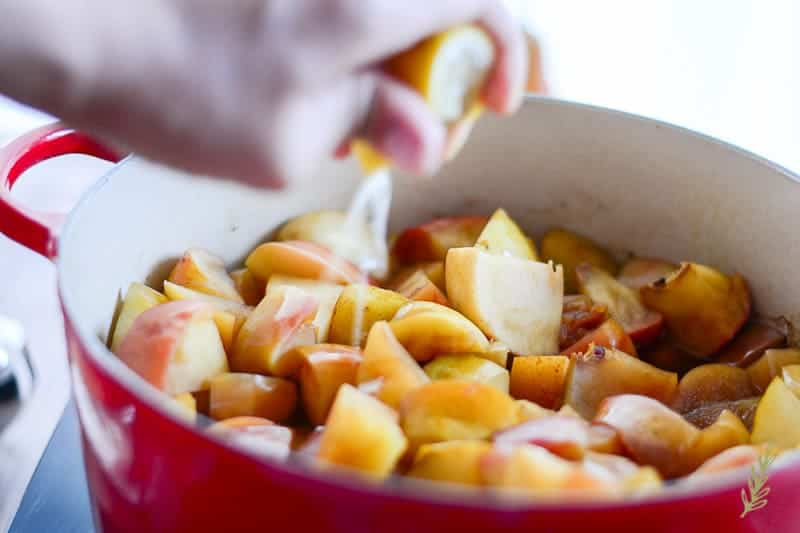 Squeeze in the juice of the lemon that you cut in half earlier. This isn’t a precise measurement, but your lemon should be medium in size. 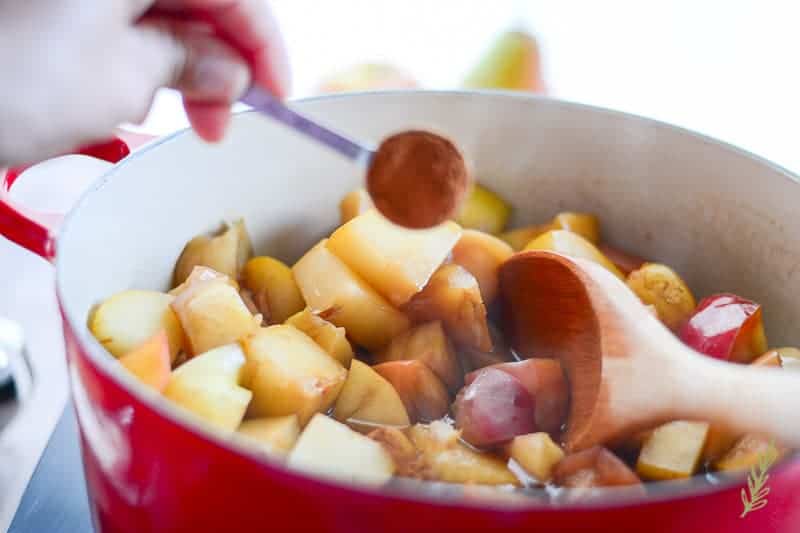 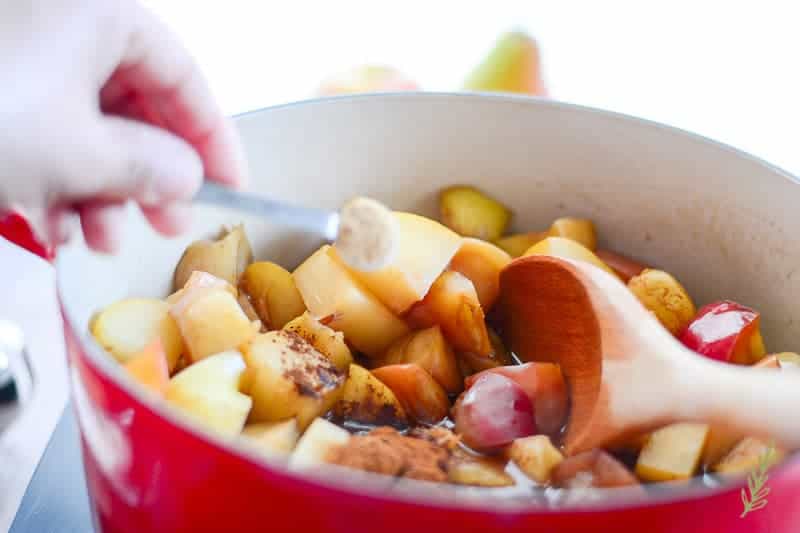 …and your ginger. You can also omit these two, and use this Pumpkin Spice Blend, instead. This will give a warmer, spicier apple-pear butter which will taste just as amazing. 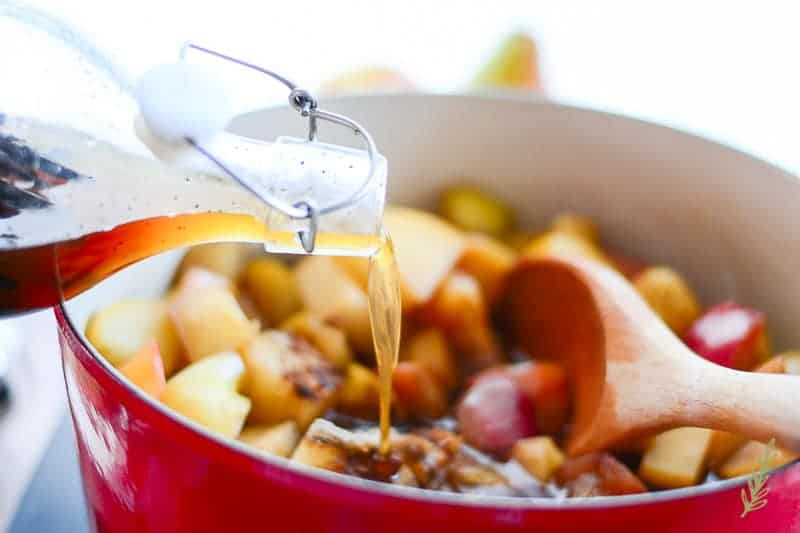 Add a splash of vanilla extract and you’re ready to puree the apple-pear mixture. 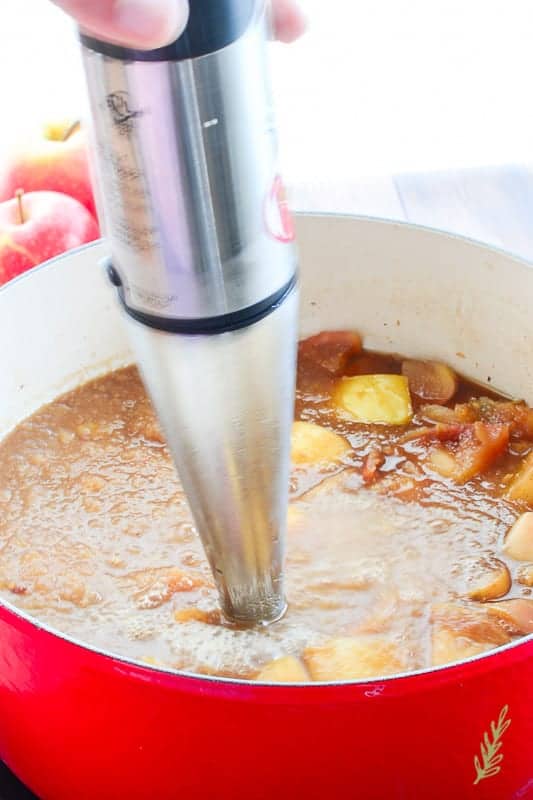 While using a blender is perfectly acceptable, and doable, at this point; I have an aversion to transferring searingly hot food into a pressure vacuum. You know, my purty face, and all. Instead, I use an immersion blender. Immersion blenders are just what they sound like- blenders which can be immersed into whatever you need to puree. It takes the hazard out of having to spoon the apple-pear mixture into your blender. All you need to do is make sure the blade portion of the blender is fully submerged in the apple-pear mixture. Start blending on the lowest speed, and gradually increase speed as the mixture is pureed. Make sure to use the immersion blender to stir frequently to get all of the chunks pureed.

If you don’t have an immersion blender (you really should), then use a traditional blender. Transfer your apple-pear mixture 3 cups at a time (more, or less, depending on your blender’s capacity). Make sure you remove the plastic insert from your blender’s top to ventilate the hot mixture. Place a folded kitchen towel over the hole in the blender’s lid to make sure the mixture doesn’t go everywhere and begin blending. Place the mixture into another heat-proof bowl until you’ve blended it all. Once you have, you can place it back into the original pot you were using. 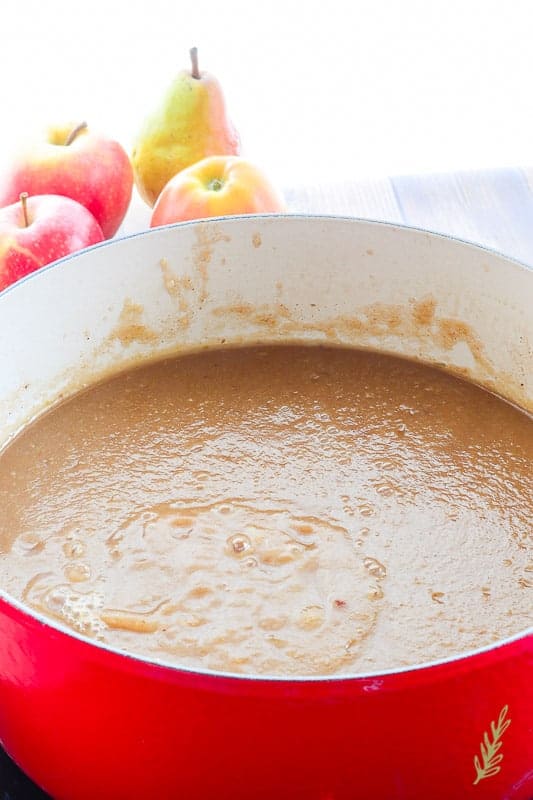 Your apple-pear puree should be smooth and free of lumps. Now, here’s where some of you will abandon me (traitors).

This apple-pear butter may be completed one, of two, ways. You can either hold my hand and walk with me down the path of diligence…or you can save yourself a babysitting job and put it into the slow cooker. We’ll talk about the latter first.

Um…well, basically…put it into the slow cooker and cook on low for 7-9 hours. The last hour, uncover the pot and allow to cook for another hour. You’re done. Big whoop. (Yes, I’m jealous.)

For those of us that don’t mind the struggle, place your pot into a preheated 400°F oven. Cook for 30 minutes and stir. Continue cooking and stirring every half-hour until your mixture has thickened and reduced by 3/4’s 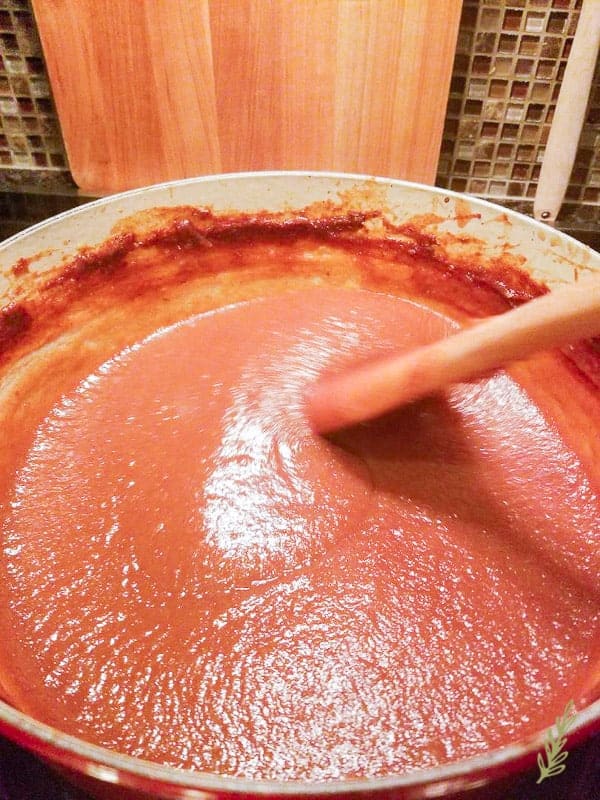 You’ll be able to see the difference in texture and in how much your apple-pear butter has reduced. If you are canning, prepare your canning jars according to manufacturer’s instructions and fill the jars with your VERY hot apple-pear butter. Cover with your lids and bring to a boil for 10 minutes to seal properly.*

*I’m not a canning expert, it’s best to refer to your particular jar’s canning instructions (or Google) to ensure the safest way to can your apple-pear butter.* 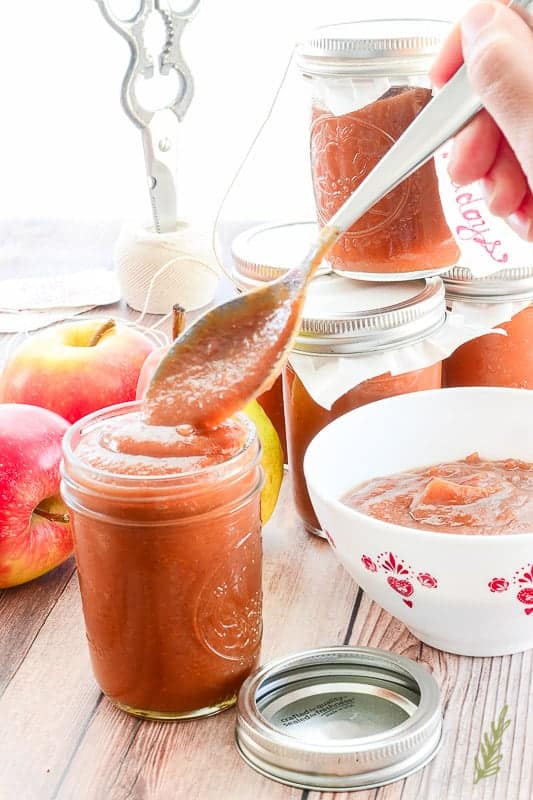 Since, once again, my family acts like a bunch of savages whenever I make this, I no longer can it; I just spoon it into clean mason jars and refrigerate. This apple-pear butter will keep, refrigerated, for up to two weeks.

Spoon it into your mouth, spread it on toast, bagels, english muffins, pancakes, or even my Fruit and Grain Pumpkin Bread. Pin it for later so you can make it whenever you have some extra apples and pears. 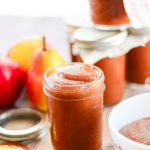 Check out these other “Edible Gifts” that are guaranteed to make your friends and family make merry:

Open
Shrimp and grits is played out. Yeah, I said it.

Open
Word on the street is that it's #nationalhuggingda

Open
If you're going to claim to be a cheese lover, you

Open
This post isn't a debate! So don't @ me about sug

Open
It's National Hot Toddy day, which is only fitting

Open
Tell me a quirky food habit of yours!🤔 ONE of m

Open
If you've never made Cream Puffs at home, I have

Open
Mais Cher, it's nearly Mardi Gras season and this