February 9, 2021 by Marta Rivera
Use dried beans (begin the evening before) to create the most flavorful red beans and rice this side of New Orleans. Canned Beans instructions can be found in the notes.
Get RecipePrint Recipe
701Shares 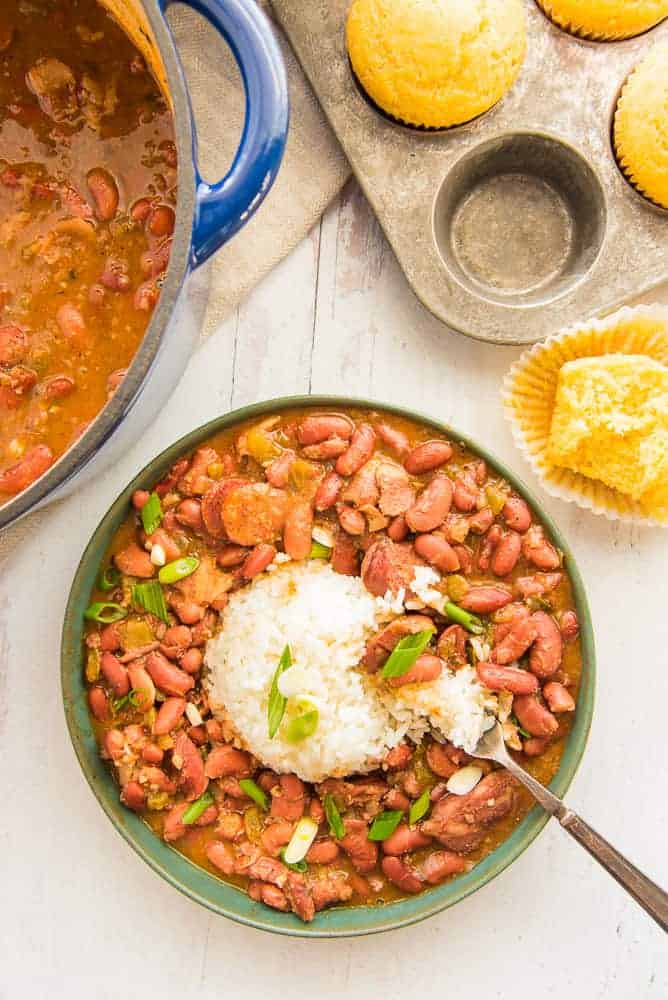 If you’ve never made a batch of Creole Red Beans and Rice from scratch, you are missing out on so much. Canned beans can’t hold a candle to the texture and flavor of beans made from their fresh or dried state. The snap of a bean when you bite it, the spices and herbs that penetrate the beans…so much of this recipe makes it worth the effort.

The thought of preparing un-canned beans might overwhelm you. Don’t let it. Most of the prep-work when it comes to making it is passive. Meaning, it does its thing while you go about your day.

What are Creole Red Beans and Rice?

“Creole” anything comes from Louisiana and is considered the more refined cuisine of the state’s residents. When it comes to this particular recipe, though, we can thank escaped Haitian slaves for introducing it to the good folks of Louisiana.

The dish is served with a religious-like commitment on Mondays as that used to be the washday. Instead of laboring over a meal on the busiest day of the week, the red beans puttered away on the stove unattended Monday and were ready to enjoy by the time all the tedious “washing up” was completed. The leftover ham or pork from Sunday evening’s dinner was the dish’s base flavor, and it ensured nothing went to waste.

Cooks in both private homes and restaurants prepare red beans and rice. Like many other native dishes, each family has its own unique recipe.

What makes these Red Beans and Rice Creole?

One of the few differences between Cajun and Creole recipes is that the latter incorporates tomatoes. In this recipe, tomato paste transforms the plain red beans into Creole red beans.

Besides that subtle difference, Cajun and Creole cuisines differ in the ingredients their cooks had easy access to. I like to say that Creole cooking is the posh steakhouse, while Cajun cooking is the grandma’s kitchen. Both are equally amazing places to get food; one is just more luxe than the other.

When you research the history of Louisiana, it all makes sense. The city-dwelling Creoles had ready access to the butter, creams, a plethora of seafood, and their European forefathers’ cooking techniques. Cajuns in the country just knew how to throw down with what they could get from the land.

How many times do I have to sort the beans and why?

Any Latina (or bean-lover) worth their weight in legumes will tell you to sort through your dark red kidney beans (or any bean for that matter) three times.

The first two times are practice, my mother used to say, the third is the actual sort. I don’t think that’s the real reason, but there is some truth to it. No matter how well I think I sorted the first two times, I inevitably find an undesirable during my third sort. If you’re a more laser-focused bean-sorter, once or twice is sufficient.

When sorting, you want to remove any beans that look shriveled, broken beyond recognition, or ones that just aren’t up to snuff. It goes without saying that stones, twigs, or foreign particles will also be removed.

After you sort your beans, put them in a colander and give them a rinse under cold running water.

How long do I soak dried beans?

When it comes to red kidney beans, soaking them isn’t optional. Red kidney bean lectin (a protein) is toxic. It isn’t “cyanide potent,” but it will make you regret life while becoming one with your toilet.

The best way to guard against an evening of misery is to soak your dried beans for no less than 6 hours but no longer than 12. I usually sort, rinse, and begin soaking my beans the night before I plan to cook them. Breaking down that lectin begins here.

Once the soaking time is over, strain the water from the beans before giving them another rinse under cold, running water.

What do I need to make the Creole Red Beans? 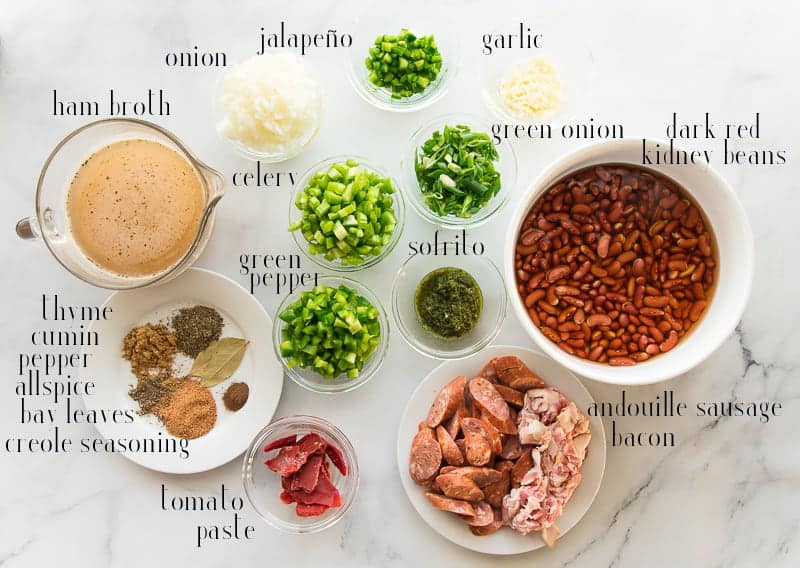 The cooking takes place in a 4-quart dutch oven. This is a one-pot meal, well, kind of, the rice gets made in a separate pot. So, it’s really a two-pot meal, tops.

Can I replace the pork products? 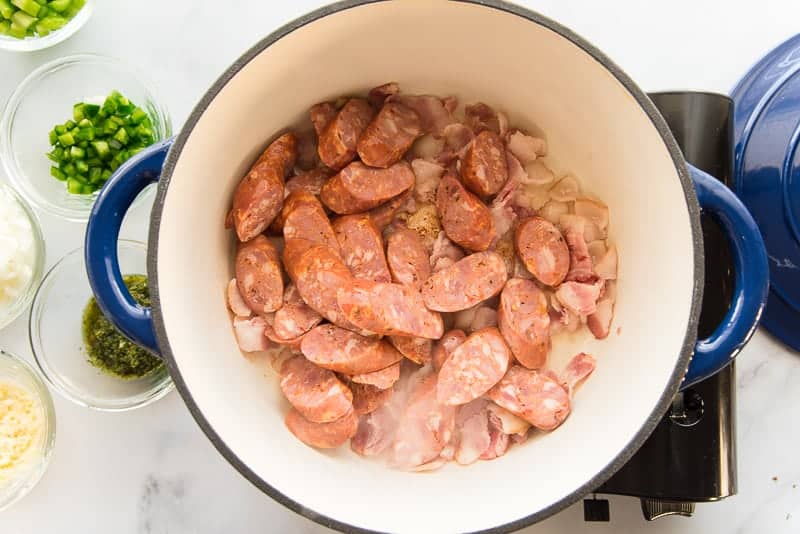 If you are not a pork fan, replace the ham broth with chicken broth. A substitute for andouille sausage is chicken andouille or beef polish kielbasa (odesskie). You can replace the bacon with turkey bacon or omit it altogether and use oil to replace the rendered bacon fat.

In a dutch oven, over medium-high heat, render the fat from the chopped bacon. Add the bacon to the pot before you turn the stove on. As the pot comes up to temperature, the bacon will slowly begin rendering its fat. After 2-3 minutes of cooking, there should be about a tablespoon of bacon grease in the bottom of your pot.

Add the sliced andouille sausage to the pot. Stir the sausage in so it’s combined with the bacon. Brown the sausage for 2-3 minutes, or until it takes on a little color.

What is “the holy trinity”? 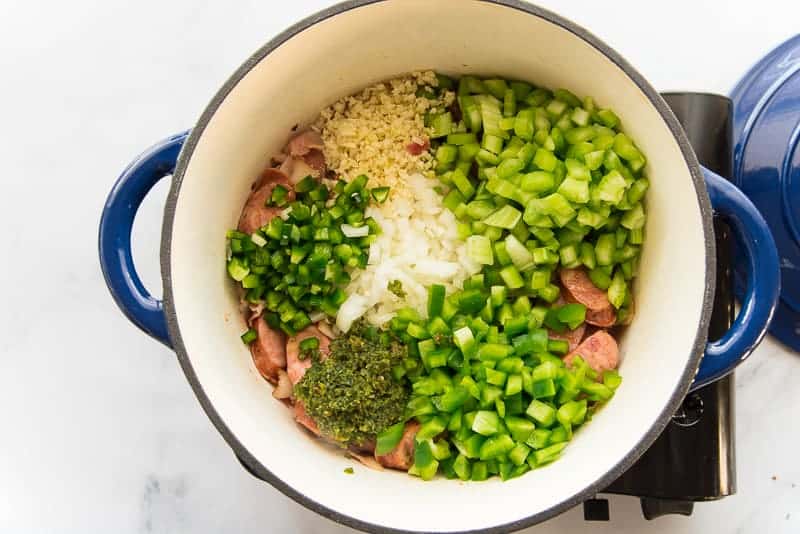 The holy trinity is an aromatic base in Creole and Cajun cooking. It’s usually equal parts diced onion, green bell pepper, and celery. I say “usually” because, me being me, I add more onion than the other two.

Add the onion, bell pepper, celery, jalapeño, garlic, and sofrito (if you’re using it) to the pot with the sausage and bacon. Give everything a stir and sauté the veggies for 3 minutes, or until they begin to look glossy.

Now it’s time to make it Creole. Add the tomato paste and the spices to the pot and stir to incorporate it all.

How long do I need to simmer dried beans? 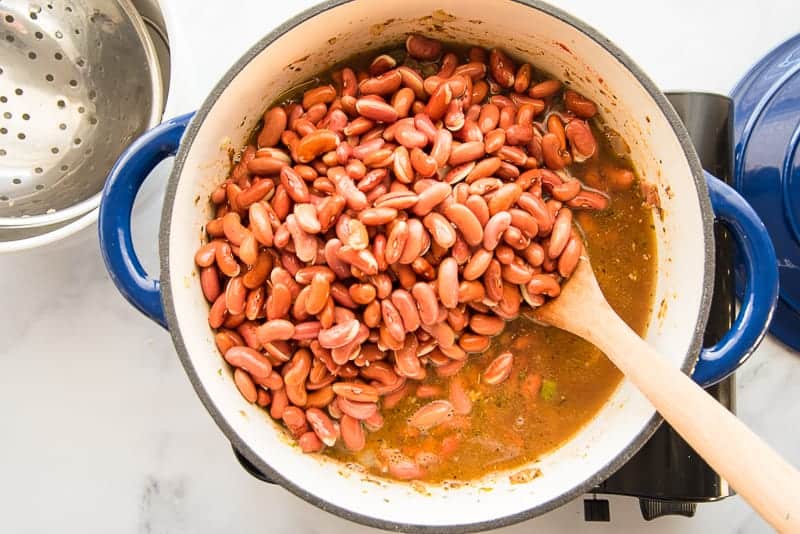 Add the soaked, drained beans to the pot along with the ham broth.

The second step in ridding our beans of lectin (that toxic protein I told you about earlier) is boiling the beans for at least 10 minutes.

Bring the water in the pot up to a rolling boil. Boil the beans for a 10 full minutes. Stir them occasionally to keep beans from sticking to the bottom of the pot.

After boiling the beans for 10 minutes, reduce the temperature to medium-low and simmer them for 2 1/2 hours.

Can I replace the dried beans with canned?

Yes. You can replace the dried beans with the canned stuff.

What kind of rice goes best with these Creole Red Beans? 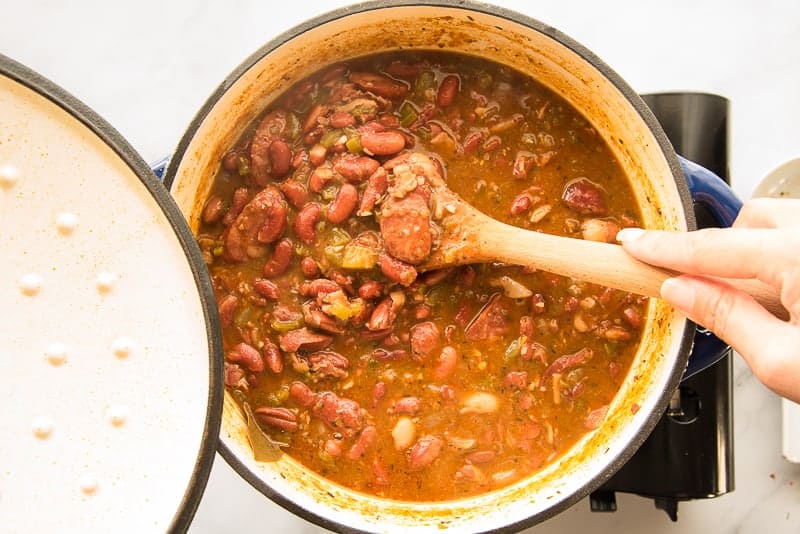 The best way to serve the red beans and rice is with plain white rice. I have tried it with brown rice (too muddy-tasting), basmati (too floral), and even quinoa (just. No). White rice doesn’t jockey for taste here, which is what we need. You want to serve this with a type of rice that will play a canvas to the masterpiece that is the red beans and rice.

Use this recipe to make a batch of steamed White Rice.

Can I make Creole Red Beans and Rice ahead? 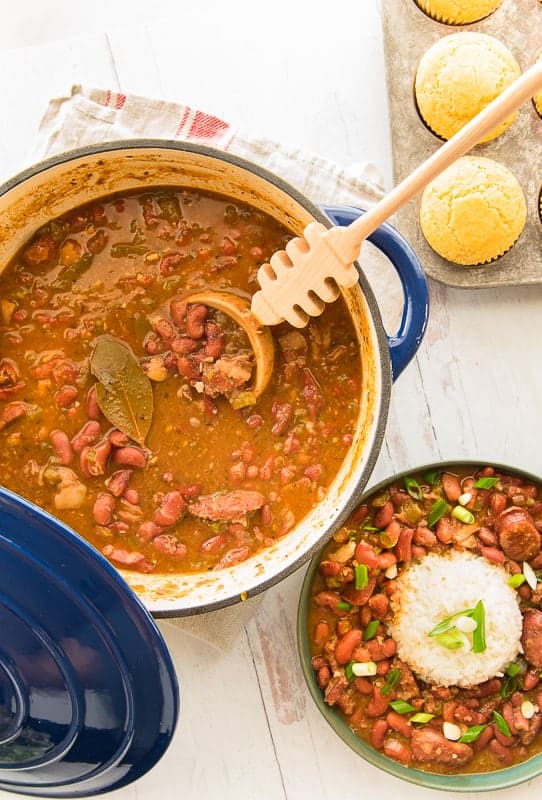 Yes, in fact, I actually encourage you to do so. The longer the beans sit, the better the flavors come through. That old saying that the flavors “have married” is an understatement here.

Prepare the Creole red beans and rice as instructed and transfer them to a food storage container. Freeze the beans for 2 months or refrigerate them for up to 3 days.

When you’re ready to enjoy them, just reheat them thoroughly in the microwave or on the stovetop.

How do I serve them? 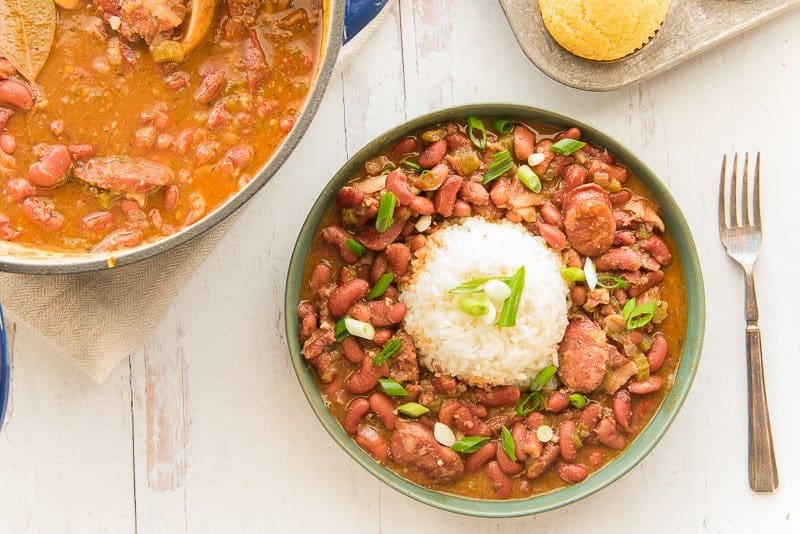 I always tell people that the name of your recipe tells you how much rice to serve. The Hispanic dish of arroz con habichuelas (rice with beans) indicates a higher rice ratio to beans. This dish, red beans and rice, tells us that we should serve more beans than rice.

Dish out 1/2-3/4 cups of the white rice, then surround it with a generous serving of red beans. I garnish my plate with thinly sliced green onions, but jalapeño slices, parsley, or no garnish at all will work just as fine.

Sweet, Buttery Cornbread is never a bad idea to serve with your Creole red beans and rice. Take my word for it.

How should I store leftovers?

Once you’ve had your fill, transfer the cooled red beans and rice to a food storage container. Refrigerate the leftovers for up to 3 days.

Sometimes, as the beans sit, the sauce thickens. If you find your sauce is more of a thick paste, thin it with a bit of ham or chicken broth or water as you reheat it.

Remove the servings of beans you want to eat and reheat them in the microwave or on the stovetop until piping hot.

Can I freeze the Creole Red Beans? 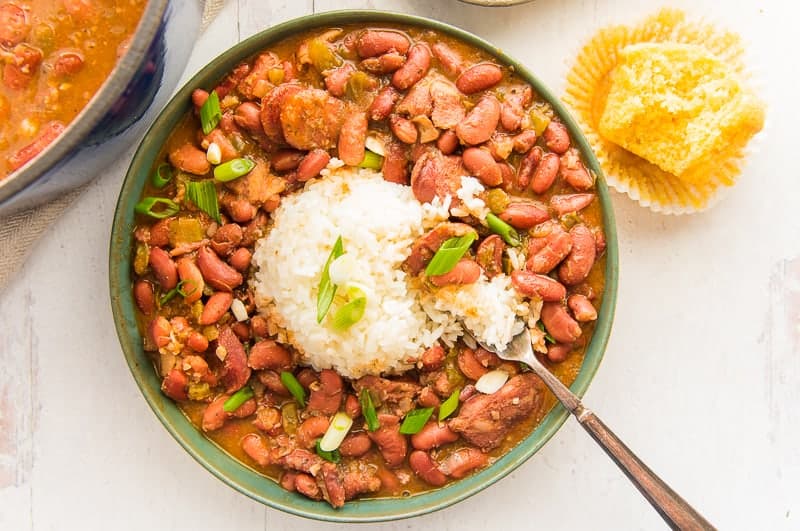 I often double a batch of red beans and rice just to freeze, so the answer is a resounding YES.

Transfer the cooled beans to a freezer storage bag. As always, freeze the bag lying flat, so it takes up less space when you stand it up after it freezes solid. Freeze the rice in a separate bag while you’re at it.

The red beans and rice freeze exceptionally well for 2 months.

What did I tell you? Making mouthwatering Creole Red Beans and Rice is not at all problematic. It just takes is a bit of pre-planning for the soak before you’re set to enjoy a taste of Louisiana without traveling anywhere but the grocery store (if that).

Let me know what you think of this recipe in the comments below. Be sure to pin this to your boards, then share it with your friends and family 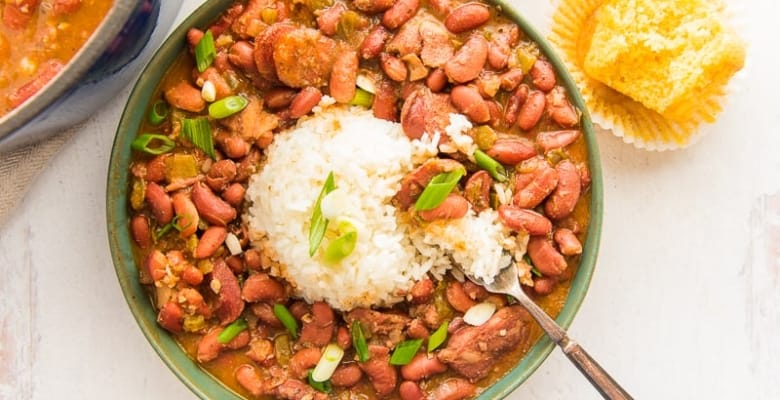 Marta Rivera at Sense & Edibility
5 from 24 votes
Use dried beans (begin the evening before) to create the most flavorful red beans and rice this side of New Orleans. Canned Beans instructions can be found in the notes.
Servings: 8
Print Pin Recipe
Prep Time 15 mins
Cook Time 3 hrs
soaking time (or anywhere from 6-12 hours) 6 hrs
Total Time 9 hrs 15 mins

Soak the Red Beans (Begin at least 8 hours ahead)

Render the Fat and Sauté the Aromatics

Add, then Simmer the Beans

The soaking, and 10-minute boiling the beans later on in the recipe is not optional. The toxic lectin in the beans is removed during these steps.

To Use Canned Beans Instead of Dried: 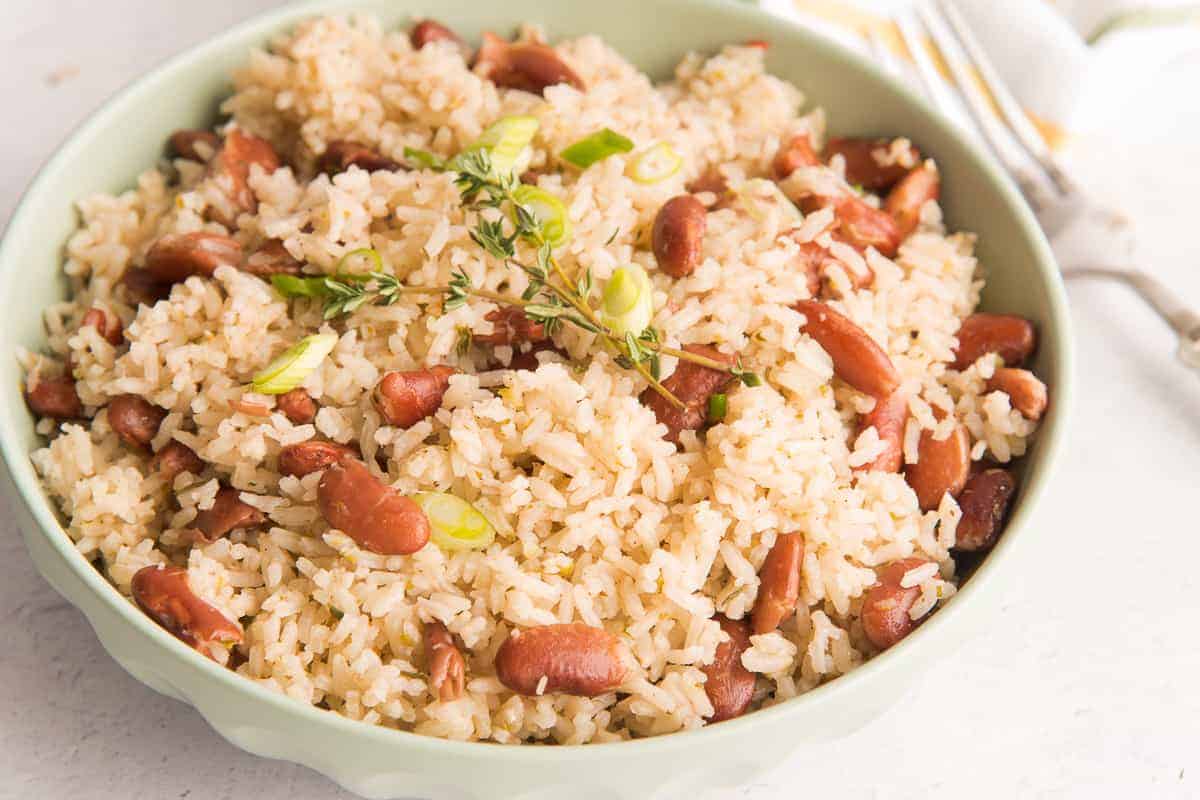 This is stunning and I need to make it this weekend! Thanks for the recipe!

I can’t tell you how excited I am about this recipe!! Love red beans!!

My husband loved everything about this dish! I cooked it for him this week

So glad it was a hit!

This looks so good I can’t wait to try it!

Wow! This dish looks amazing!! I’m a big fan of Red Kidney beans, but have never had this recipe!!! I love all the flavor that goes into it! YUM!

I love red beans with rice! They’re like a match made in heaven! hahaha I’d love to try this creole style recipe for sure!

Let me know what you think of them!