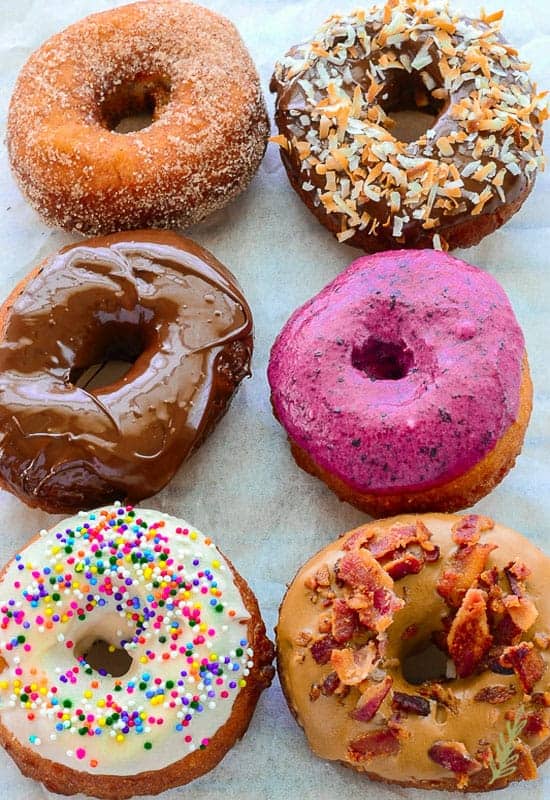 My cake donut recipe has a way of reminding me how frenetic I can be at times…okay, most times. So, National Donut Day just passed. I realized this was so about mid-morning the day of. It was then, at ten a.m., that I decided, “I need to participate like the excellent food blogger that I am!” This, of course, meant that I needed to mix, fry, decorate, style and photograph donuts to commemorate a holiday that I didn’t even know existed when I woke up. Frenetic? Spastic? I like to ease the ego-chaff by saying that I’m “spontaneous”. Yeah, spontaneous, is what I am.

Since I only had a few hours left in the pseudo-holiday, I chose to put my cake donut recipe to use. The recipe is so easy, even a spazz (me) can do it. Most donuts- yeast donuts, I’m talking to you- involve mixing, kneading and rising (twice). I didn’t have time for all that. My self-imposed stress demanded a quick recipe that would yield picturesque results. So, the cake donut recipe was unleashed and I set about trying to pull of a newbie blogger’s miracle.

Now, I say I was hustling to get at least one image of a cake donut onto my camera’s SD card. However, you have to know me to understand what was really going on. Me is this type of chick who says, “But, what fun would just one type of donut be?” Me has no good sense. She definitely gets on my nerves when she acts like that. I had now gone from “just get one on the kitchen island and click a shot!” to, “Let’s do six!” Issues, I tell you. I’ve got more than Vogue.

So, now it’s SIX cake donut flavors that I needed to make and shoot…and edit…and post…yeah. This is a glimpse into my mind, Friend- and it ain’t pretty. But! Thank the Lord above for this cake donut recipe!

The reason why this recipe is so “me-friendly” is because it doesn’t involve the double rising that yeast doughnut recipes require. And, I LOVE yeast donuts. I have never, ever, been a fan of the cake donut. I consider it the yeast donut’s bootleg friend who’s riding its coattails. It’s trying to get love from the ex it cheated on and got someone else pregnant while she was pregnant. WHOA!! Basically, no one cares about it. That’s how much I disliked the cake donut. But THIS cake donut? This one’s special. This one is the color red in a sea of white- it stands out. I don’t know if it’s the ease of preparation, or the fact that it stays so moist for so many days (3 the last time they lasted that long). Something about them has converted me to accepting the cake donut as one of my own. But…only these. 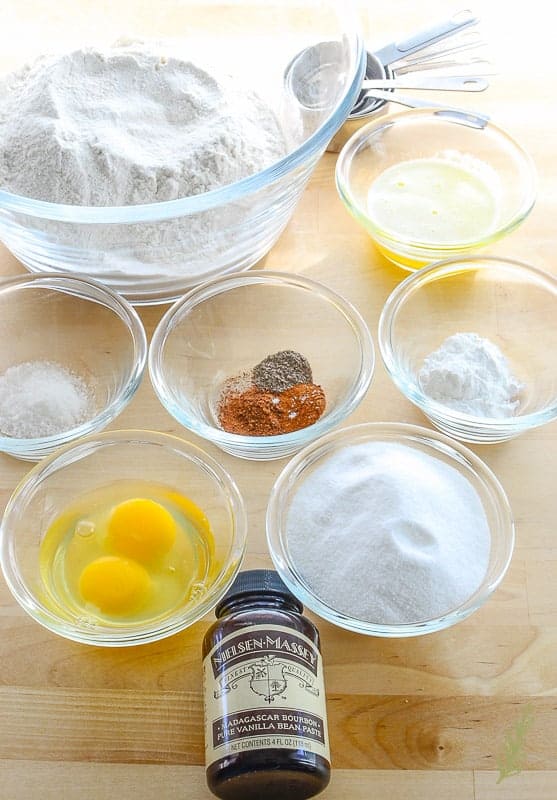 So, let me show how easy they are to make. Wait! They’re SO easy and quick to make that I was tempted to over-photograph in order to get a blog post that was long enough! That’s the type of cake donut recipe we’re dealing with here, folks. But, then I decided I didn’t want to, so it is what it is. Here’s most of what we’ll need. I have no idea why the rest of my wet ingredients aren’t in this pic…oh, wait!! Yes, I do! Because I’m a psycho who decides to make donuts at the last minute and I was rushing! That’s right! 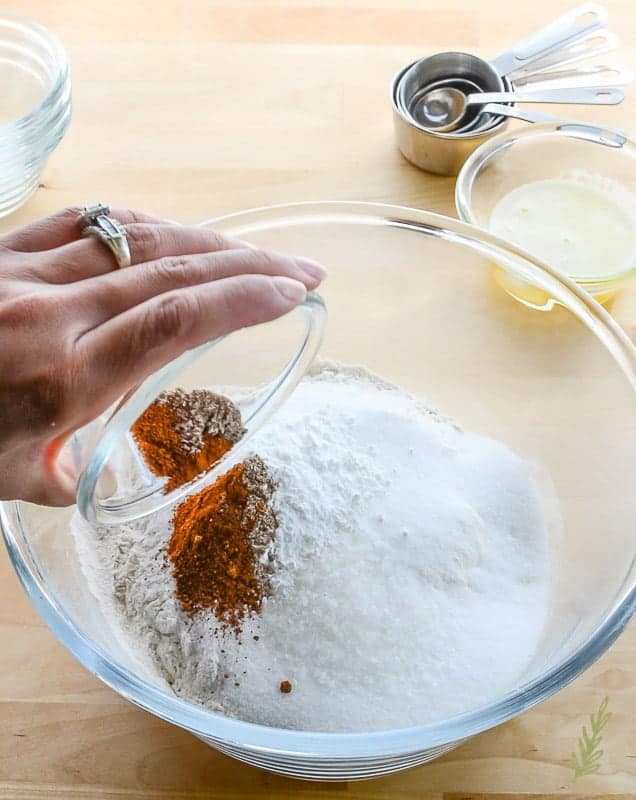 Combine all of the dry ingredients. I add ground cinnamon and cardamom to my dry base because it creates a depth of flavor that makes everyone cock their heads to the side in wonder. “What is that that I’m tasting?” They always ask me. “Love and the blood of unicorns,” I always reply. Petrified glances usually follow. No, but you can totally sub out the cardamom for ground nutmeg if you don’t keep it on hand. Adding spices to a cake donut recipe is a must though. Without it they will taste flat and sad. Salt, baking powder, flour and sugar round out the rest of the dry ingredients. Stir those together with a whisk and step one is done. That took, what, 2 minutes? 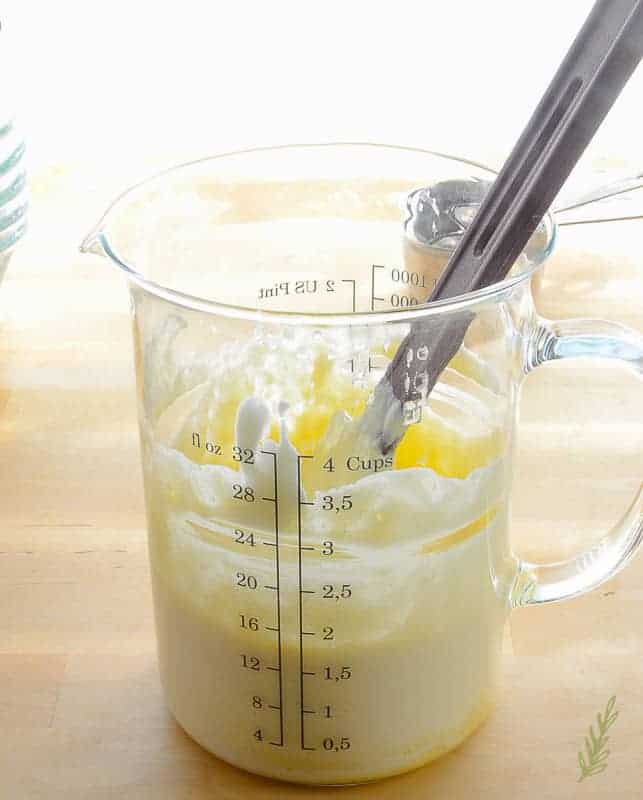 Next we combine all the wet stuff in a separate container- so, the eggs, melted butter, sour cream, vanilla, and milk. Mix them until it’s smooth. Three minutes tops, and that’s if you’re being lazy and lallygagging. 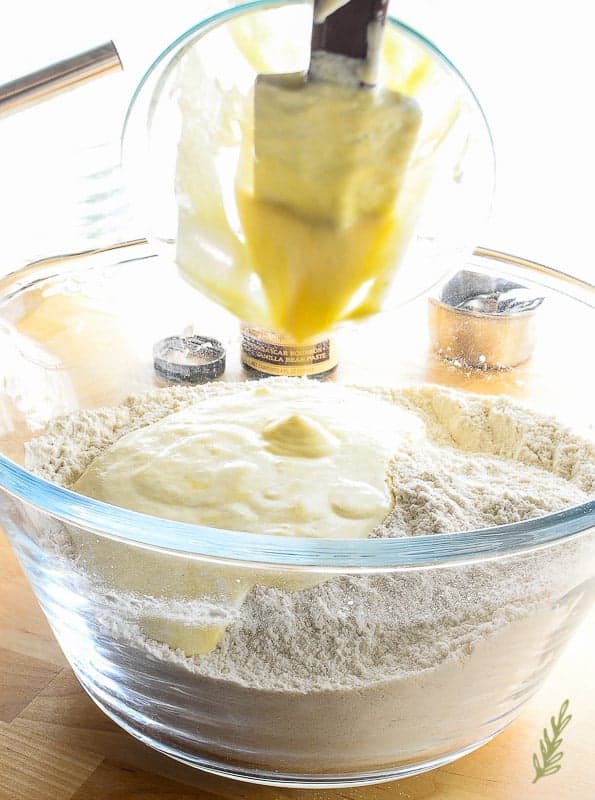 Pour that into the dry ingredients and mix until it looks like this: 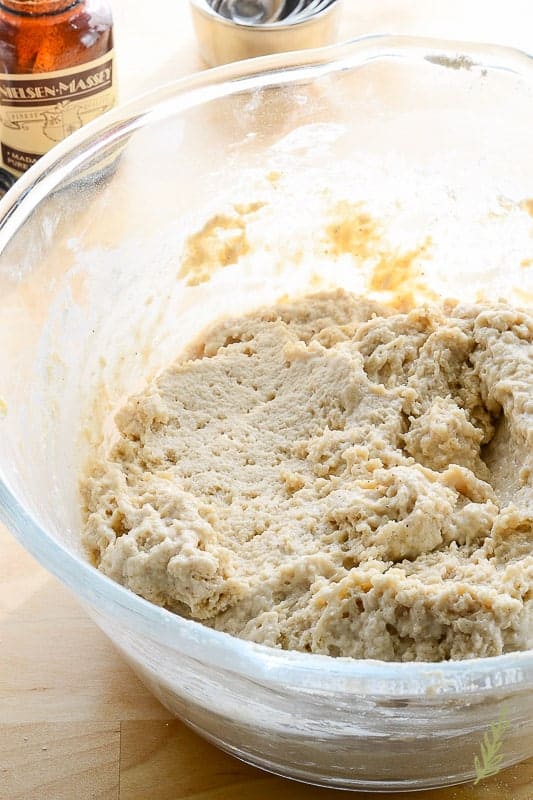 This will look a little dry. Don’t go adding anymore liquid, though (not yet). Because if you do, it will be extra-sticky and you will curse the day of your conception. Maybe not so much, but you’ll be ticked off. But, don’t be getting ticked off at me, because I told  you not to go adding stuff yet! Gah!!

Okay, I’m sorry. You sorry? I forgive you. I love you too. Let’s never fight again, okay?

Mix it until it looks like that (up there). Cover it with plastic wrap and refrigerate for at least an hour. Yes, I know, but we’ve only got like, 15 more minutes until everything else is done…and I’m not GOD!! Something’s gotta give. I often will prepare the batter and allow it to hang out in the fridge for a couple of hours to get it nice and firm. It’s not a must, though. 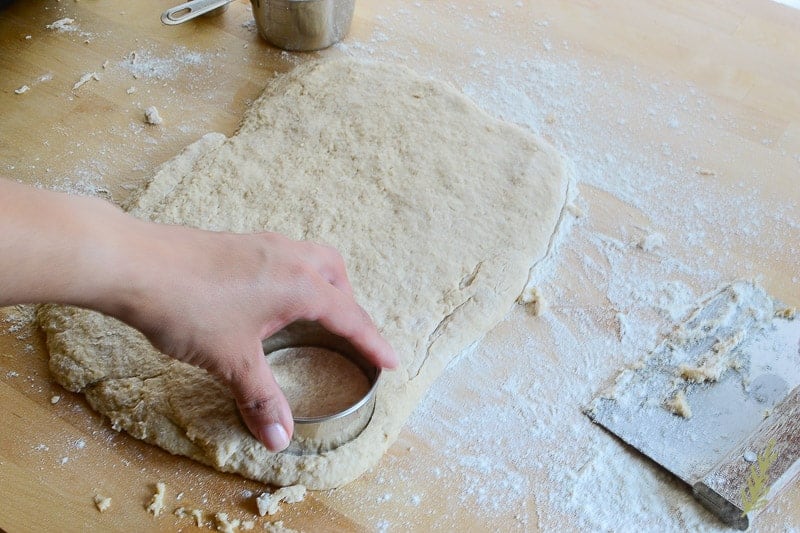 …make sure your hydrated dough is pliable and rollable and all that good stuff. If it’s crumbling and won’t hold together, then you can add more milk a tbsp at a time just until it holds together. Roll it out, on a floured surface, into a rectangle and cut out circles using either a metal cutter, an inverted glass or some other circular object. Try not to twist the cutter when you hit your countertop. This seals the dough which prevents it from puffing up when it’s fried. A flat doughnut is about as depressing as a flat tire. Cut out smaller interior holes, but don’t throw them away! Cutting out the inner holes allows the donut to cook evenly in the short time it has in the fryer. 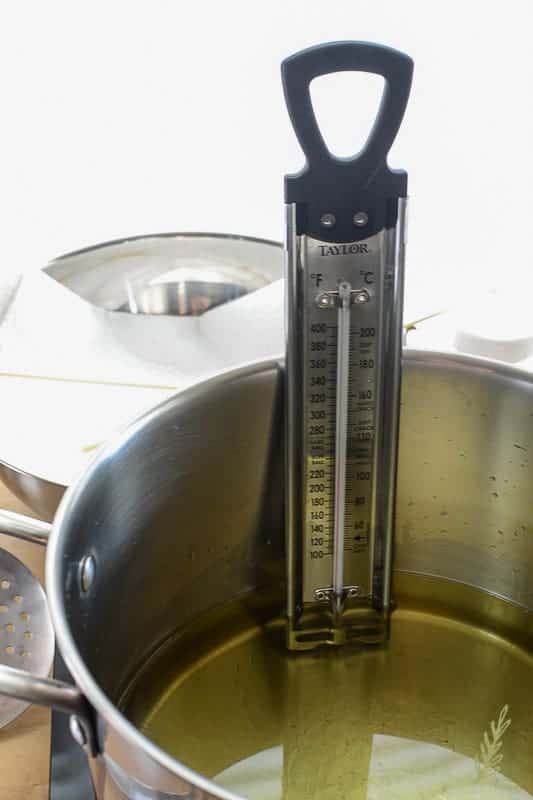 Speaking of deep frying, one of my “bestest” friends has an aversion to deep-frying. I won’t say she’s terrified of it, but I know it’s not her favorite cooking technique. Most people share her aversion to cooking in scalding hot fat. The truth is, proper equipment makes it a piece of cake…donut…that is. I’m here all night, folks. Seriously, invest in a deep-fat fryer thermometer. You don’t need a fancy deep fryer- just a large pot to prevent splashes (which cause flare-ups and death), some oil, and a thermometer and you’re guaranteed success. Get your cooking oil to 360°F, and do your best to keep it there.

The key to deep-fat frying is to remember that the oils temp will fluctuate every time you do something to it. If you add too many donuts too quickly, the temp will drop down so low that you’ll be poaching your donuts in oil. Sound nasty? That’s because it is. The result will be an oily sponge. The trick is to add a donut and wait about 30 seconds before adding the next one. Don’t overcrowd your pot either. My pot will fry four donuts at a time without the temperature going berserk. If you see the oil is getting too hot (either because the thermometer is showing you, or because the donuts are browning too fast), lower the heat. 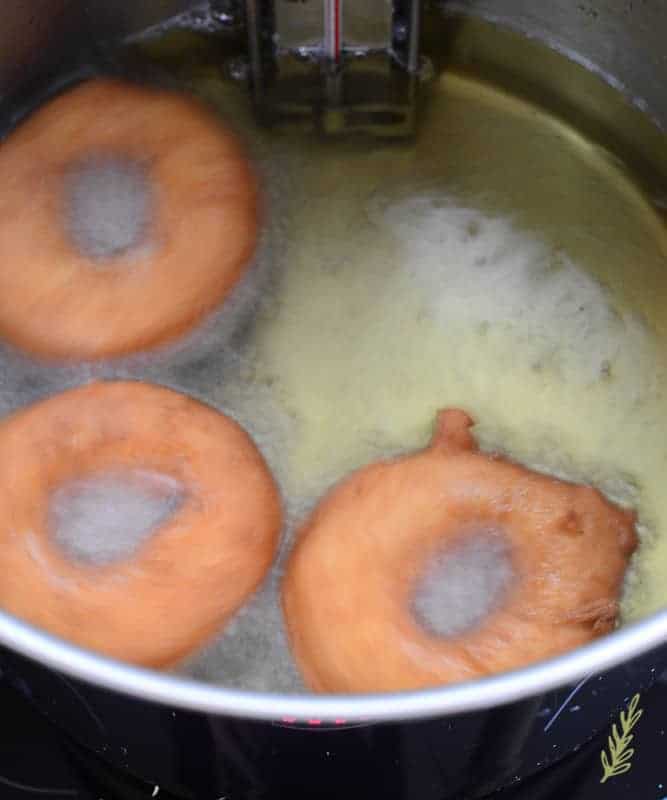 Have a spider, a pair of wooden chopsticks or a pair of tongs handy to turn your donut when you see a brown ring around the submerged portion. This is your indicator that it’s time to flip! Once your donut is golden brown and has fried for 3-4 minutes, pluck it out and put it onto some absorbent paper towels to drain. Once they’ve drained, you can keep them warm in a preheated oven (on warm- you don’t want them to bake and dry out). Continue this process until all the donuts have been fried. Lastly, you fry up the cake donut babies. 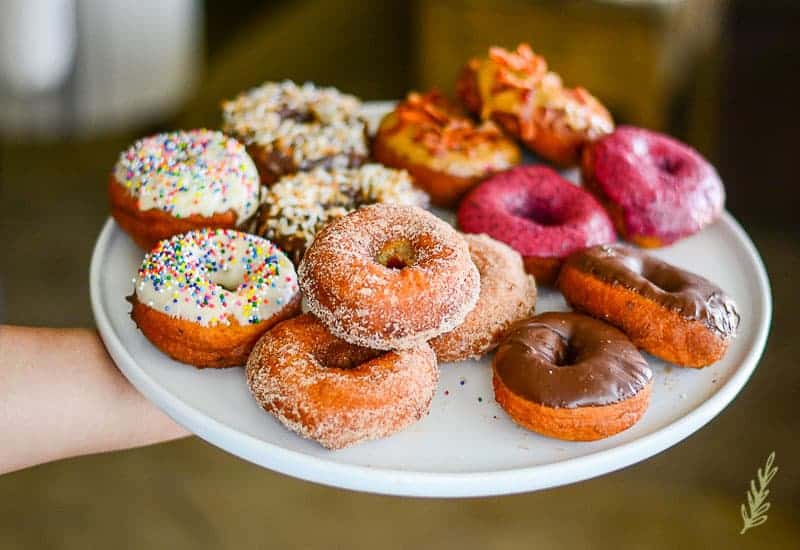 That’s all you need to achieve this! Well, you need glazes and toppings, which you can find in the links below; but after that, that’s all you need! A simple dusting of confectioner’s sugar and you have the classic powdered donut. Pin the link to find it easier, and share the recipe with your friends! Stay tuned to my antics to see what I spazz out about next, too!

Combine all ingredients and stir until smooth. Add more powdered sugar if it is too thin. Thin it out with milk if its too thick for your taste. Dip donuts into glaze.

Combine the chocolate chips and heavy cream in a microwave-safe bowl. Melt on medium power for 1 minute. Stir to smooth. Dip donut into ganache and allow to set up for a minute or two. Sprinkle with toasted coconut.

Combine all ingredients in a microwave-safe bowl. Melt on medium power for one minute, stirring after thirty seconds. Continue to heat in thirty second increments until the chocolate is melted and smooth. Dip the donuts in the ganache.

Combine cinnamon and sugar in a paper sack or bowl. Toss warm donuts into the mixture to coat.

Combine everything except the bacon in a mixing bowl. Stir until smooth. Thin with more bourbon or syrup as needed. Dip the donut into the glaze and sprinkle crumbled bacon over.

Combine all of the ingredients except the sprinkles. Stir until smooth. Thin, if desired, with a tsp of whole milk. Dip donuts into glaze and sprinkle with…well…sprinkles. 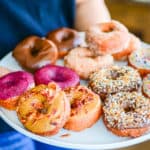 Serve plain or topped with any number of glazes! See link in post for my most popular combos.