When Hurricanes Threaten Peace: In the Eye of the Storm 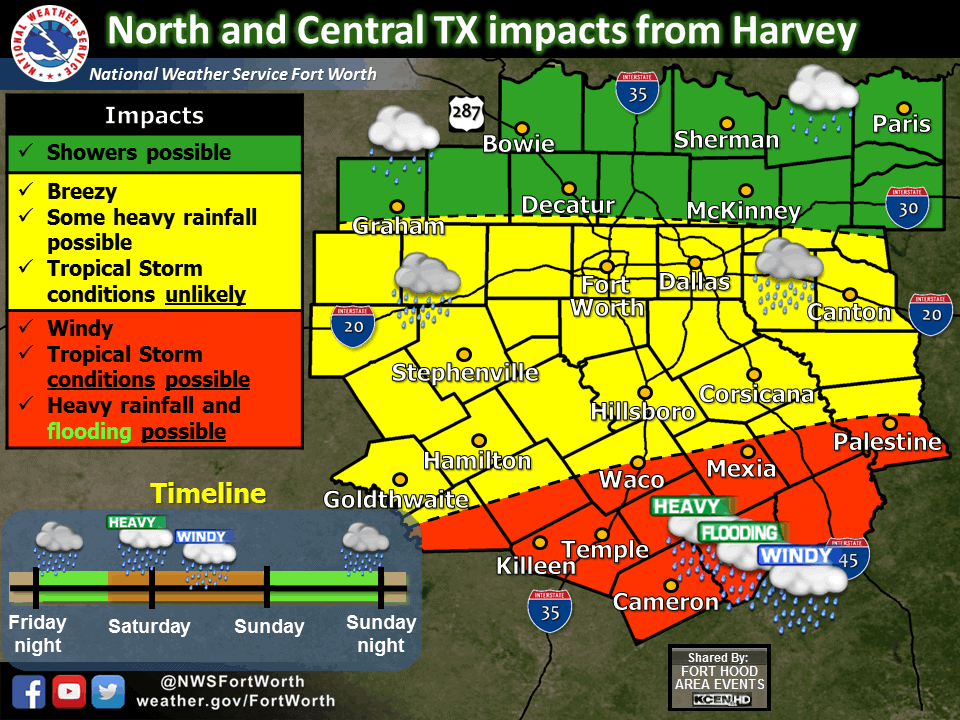 I was planning a post on how to breakdown a chicken this week. My local news station kept kicking me back into reality, though. This is a map that was posted on social media of the weather that was forecasted for us this past weekend. As I type this post, people are wading through waist-high water, trying to locate loved ones they’ve lost during one of the worst hurricanes to make landfall in Texas in decades. And I wanted to write about chicken. I live in a little city in between Killeen and Temple. If our city was in the red, Houston, and the coastal cities, were in the black. Maybe they didn’t even have a color for them. Corpus Christi, Port Aransas, and Port O’Connor bore the brunt of the impact when Harvey made landfall at their doorsteps. Houston had no idea what was about to hit them.

Devastation is an understatement.

Images like this one began to flood the internet. Whole neighborhoods were now underwater and a local government was at a loss on how to handle the crisis. Hasn’t this happened in our country before? I thought we learned from Katrina. But, you see, the problem with hurricanes is those bastards are unpredictable. Even if you can predict them, they still have a way of letting you know you’re not in charge. So it was, as the Twinks and I huddled up together to listen to the first wave of reports that were coming in about what was happening to our neighbors.

Inside I was freaking the hell out because the only person in our family who knows what to do during a hurricane is in the Middle East. Hector would’ve boarded up windows, batten down the hatches- all that smart stuff. Me? I went to the grocery store and bought pork rinds and skittles. Not my proudest moment as a mother, nor as a chef. I worried about what the effects on our city would be. We were in the red, remember?

The rain came. The wind blew. But, it seemed, at least to me, that God was showing us mercy. No power outages. The rain never fell too hard. And the wind; it blew fiercely at times, but never enough to damage anything. I felt like God was telling me, “I won’t allow you to go through anything that’s too intense right now.”

You see, I’m fragile. I’m on the tail-end of this deployment and I can barely make it through a day without breaking down in tears. The batteries in the fire detectors weren’t changed on time. I still haven’t changed the oil in the car, either. I’m hanging on by one emotional thread. People who promised to be here to support me realized it’s not as fun when you actually have to follow through with it. Don’t get me wrong; I have more people that have rallied behind me to more than make up for them, but this is getting tough. And I think- no, I know- God saw that. He spared me the stress of the hurricane’s fury. And He did it because I have my own hurricanes storming inside.

But, what about them? The elderly woman in her wheelchair, the mother clutching her baby, and the rescuers doing all they can to save them. What about them? Had God forsaken them? No. To me, the images prove that God’s hand is still upon these people and upon the city of Houston. God sent angels in disguise to rescue those who needed it the most. He shook up our country with an act of His that calmed the raging voices of hate, discrimination and separation. God restored love, charity and dignity to our country through Harvey. 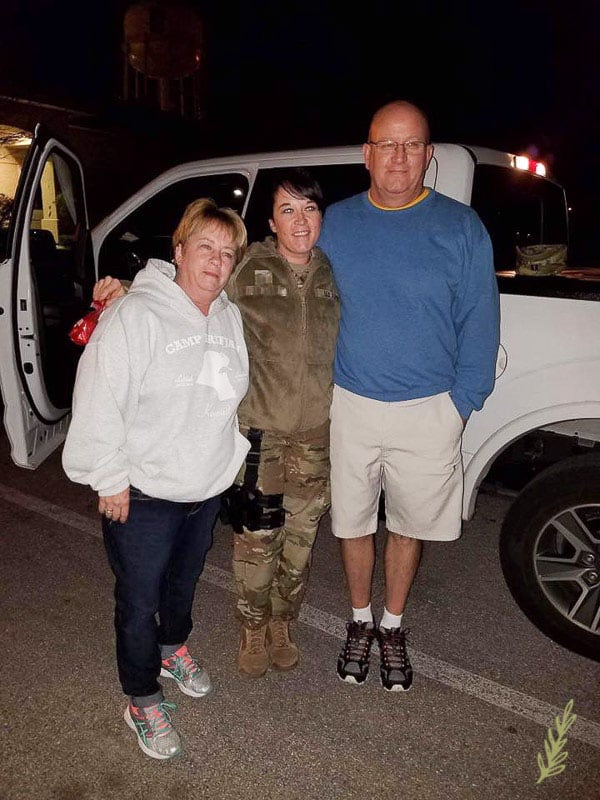 This picture was shot the day Amber (center) left her mother and father to go on another deployment. She left with my husband. I remember holding Mrs. Joni as we both cried after waving off our Soldiers. Mrs. Joni told me she’s so scared because she and Mr. Tal may now have to evacuate their home because of the flooding that is ravaging Houston. Amber was injured while downrange and had to return home from the deployment to heal. I remember messaging her words of encouragement, then reading the despair and disappointment she felt at having to leave her team behind. “God has a plan in all of this,” I remember texting her. Now, Amber’s getting ready to drive down to Houston to help her parents. Amber can drive down to Houston, and help her parents recover from this horrible event.

We wouldn’t ever be able to plan that perfectly. 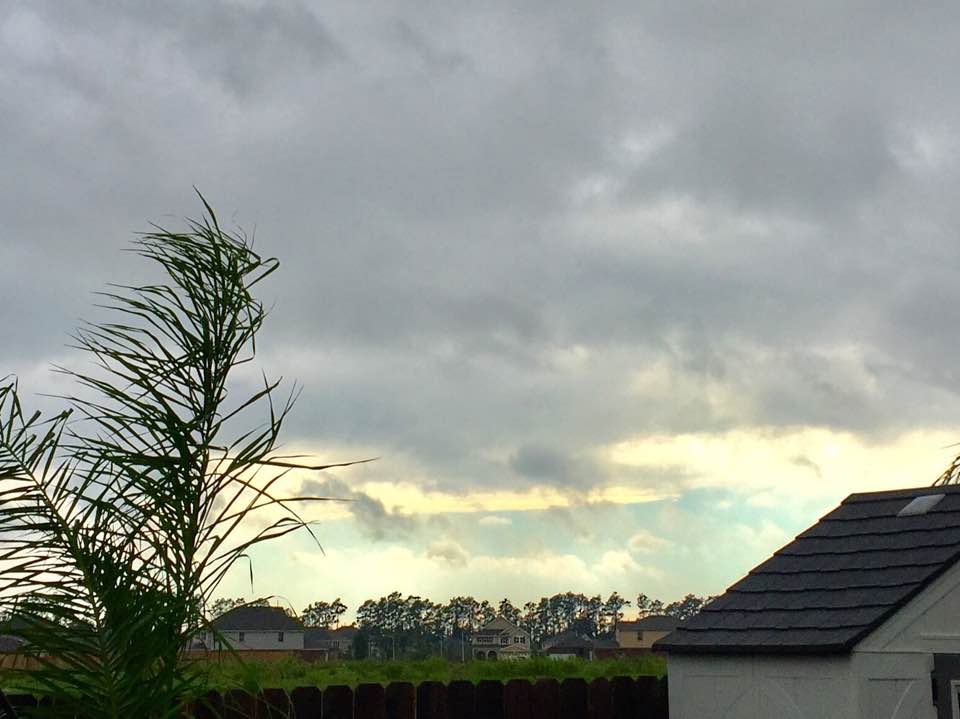 Mrs. Joni posted this picture on Facebook today. She pointed out the blue of the sky. “Do you see it? Just a little bit of blue!” When was the last time I was so happy to see a blue sky? It’s been a minute, that’s for sure. You tend to take those things for granted when you’re battling internal hurricanes. When physical hurricanes rage you long, desperately, for them, though.

It’s sad, because we travel to Houston once a year to the mecca of homeschool stores. It’s a six-hour roundtrip, but we make it every year because…well, our kids need an education and we’re not ballers. We make a day of it and that day is usually filled with seeing these two: 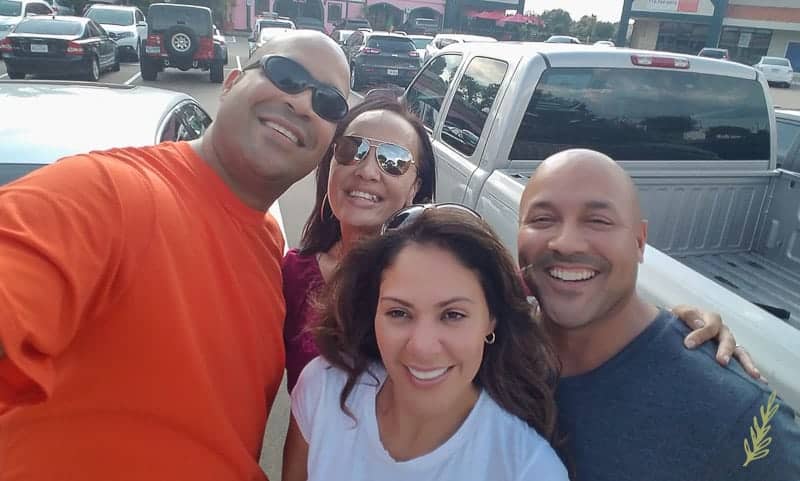 Alex and Sylvia have known us forever. We tried to remember when, exactly, we became friends, and all we could surmise was it was during a very traumatic time in their lives. Alex had suffered complications from surgery and was in the ICU. We were stationed together and Hector and I, of course, went to visit him, and Sylvia, to see if we could help in any way. We chatted, prayed, and left. Days later when Alex’s condition had improved, we visited again and he and Hector shared a moment that bonded them as brothers for life. God knew we all needed to be near one another and allowed us to be stationed here. Alex is a public servant in Houston. He’s the most charming, congenial, and hilarious guy you’ll ever meet. So, when I saw this image on the internet, I wasn’t surprised…

There’s Alex carrying a woman to safety. No doubt he’s cracking jokes to lighten the situation. He’s just that type of guy. Also, he’s definitely going to rub it in Hector’s face that he’s still fit enough to wade through water while carrying a person. There’ll be stories for days behind this image, but the one story that matters is that my friend- our friend- is a hero. To that woman he’s carrying out of the hurricane’s destruction, to us, to Sylvia and his kids and grandson- he’s a hero. Thankfully, Alex and Sylvia’s home is safe- as are they.

Many people in these affected areas aren’t as fortunate, however. That’s why I think chicken is a stupid thing to write about right now. I won’t write about food when people are trying to find food to eat, or shelter, or loved ones who are missing. This platform I have may not be huge…yet… but it’s a platform nevertheless. My husband was born and raised in Puerto Rico. They definitely have their fair share of hurricanes. One thing he told me was that when the eye of a hurricane passes over you, you can almost forget what’s going on. It becomes quiet, calm, and the sun may even begin to shine. That’s when you can think. The eye of my hurricane is passing over me, and the calm has given me clarity.

People need us. They need resources and strength that we have which they are lacking right now. Prayers are great, but prayers are only part of the solution. They need tangible, practical help and they need it from us…now.

Here are a list of charities (legit ones) that are accepting help for those affected by Hurricane Harvey, and they’re not just in Houston. Whether they are in shelters, homes of friends or still being rescued; our help is desperately needed. Now is the time for us to demonstrate to ourselves, our fellow Americans, and the world, just what America is all about. We are about putting aside political affiliations, race, religion and statuses to come to the aid of our brothers and sisters. Our countrymen. Here’s the first step in calming the hurricanes that are raging:

My baby girl has a bear named Ana, well she had 15 of the same bear, to be more specific. We bought one bear and she promptly lost it, and with it, she lost her ever-loving mind. The next time we went to the store, we bought 15 of the same dang bear. She was a year old at the time. Since then bears have been lost or given away to special people in her life. She has one bear left. When I asked my children if they had any toys to donate to the children who were being evacuated to a local center here, they said, “Yes.” My daughter placed this on my desk: 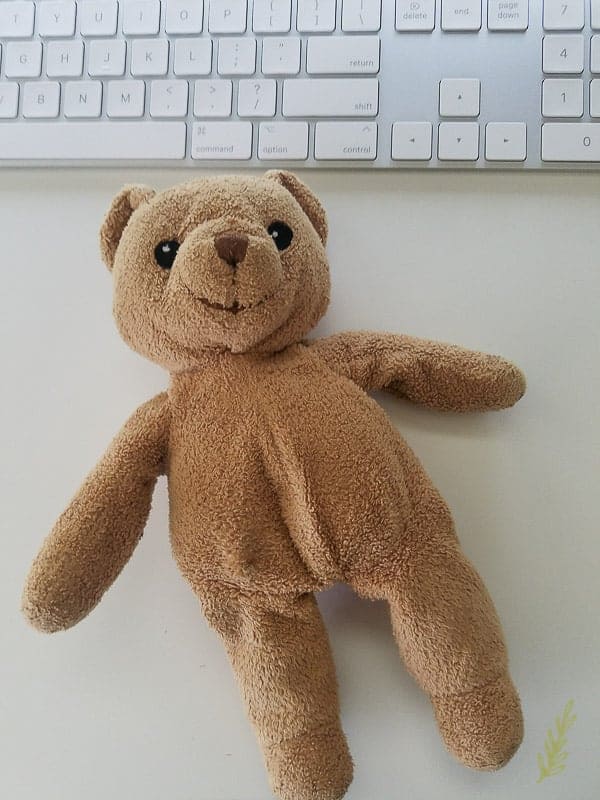 It’s my daughter’s last Ana. When I asked her if she was sure she wanted to part with it she said:

Mommy, a child out there has lost everything they owned. Maybe they even lost their favorite teddy. I have everything I need and more. Maybe Ana will bring them some happiness in the middle of this storm they’re going through.

So, yeah. Those hurricanes I’ve been battling? I think I’m going to be okay. Blue skies are peeking out, and I can see them clearly.

Oh Marta you sweet, precious girl….. what a beautiful talent you have been given! Thank you for putting life’s “hurricanes” into perspective!

You are truly amazing!

Our prayers are with you, Joni! We love you.