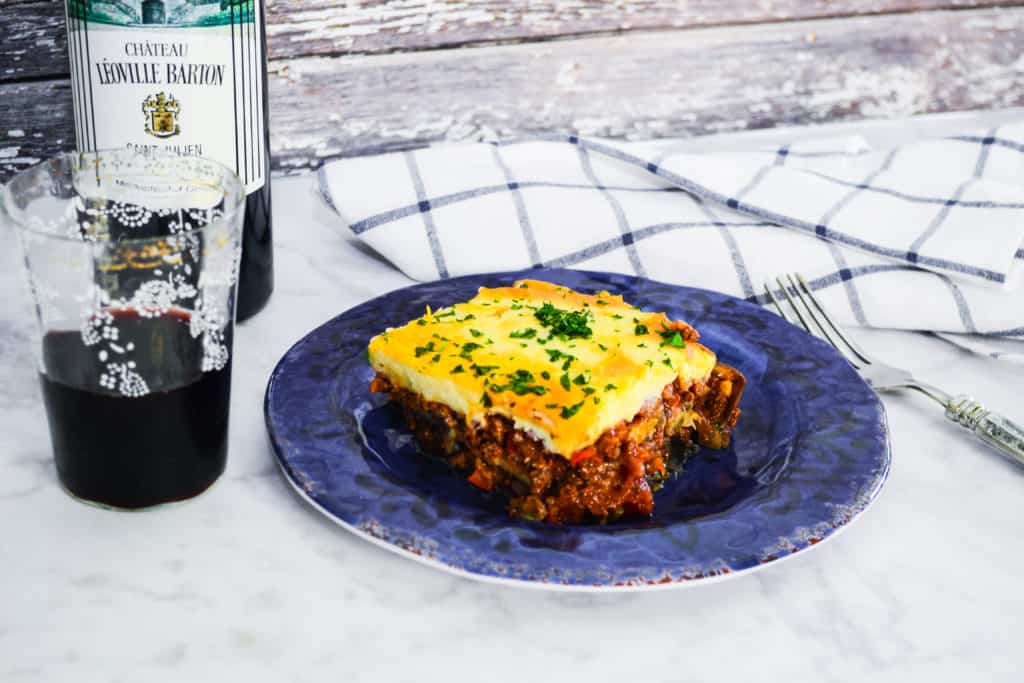 Kids can be real jerks sometimes, you know that?

Oh, I know, I know! “You can’t say that about the precious blobs of angel spit, Marta!”

For real! Children can be doodie-heads.

Don’t get me wrong. I love my Twinkies with the love of Jesus, but sometimes, when I try my best to be a doting, patient and nurturing mother- they say crazy ish that makes me want to feed them gruel and water.

I’m sure you’re like me in your approach to motherhood. I try to be the best helicopter/dragon mom I can be, but I balance it out with a smidgen of tiger/free-range momming, so I don’t raise total tools. I buy organic, non-GMO foods when necessary, but still let their dad and them observe the “5-second rule” like it’s an Olympic sport. I try to let my kids think for themselves and make decisions on their own…well, that is until they decide to engage in activities that put theirs or the other’s life in danger. It’s then that I wonder if we are, in fact, the “(Home)School for Kids who Don’t Read Good.” Then I just tell them, “Go find something else to do.” Which really means, “I can’t deal right now.”

Sure, I’m fairly certain not every mom thinks or behaves this way, but you sure as heck want to sometimes. So, God put me in your life to let you know you’re not alone. It’s my mission, really.

So drama with my beloveds commenced the time that I decided to be a bomb.com homeschool mom and commemorate our study of Greece by making a very popular Greek dish of eggplant, savory beef and béchamel called: Moussaka.

I first made moussaka in culinary school during my International Cuisines course. Having never heard of it, and still being a vegan at that time, I wasn’t thrilled that the chef instructor told me an “A” was riding on it. PS: never force a nerd to make choices between personal ideals and grades. You’ll end up with a drug-dealing Dean’s list student, or something along those lines. Anyway, I made the doggone moussaka, tried it- because, “How do you know if it’s any good if you don’t eat it ‘Granola-girl’?” (he was a total jerk, BTW) and, actually enjoyed it. Had no desire to make it again, though, until I found some amazing fairytale eggplant at a farmer’s market in Austin. All this just happened to coincide with the conclusion of our study on the Punic Wars. I figured now was as good a time as any to blow the dust off of my old moussaka-making skills. 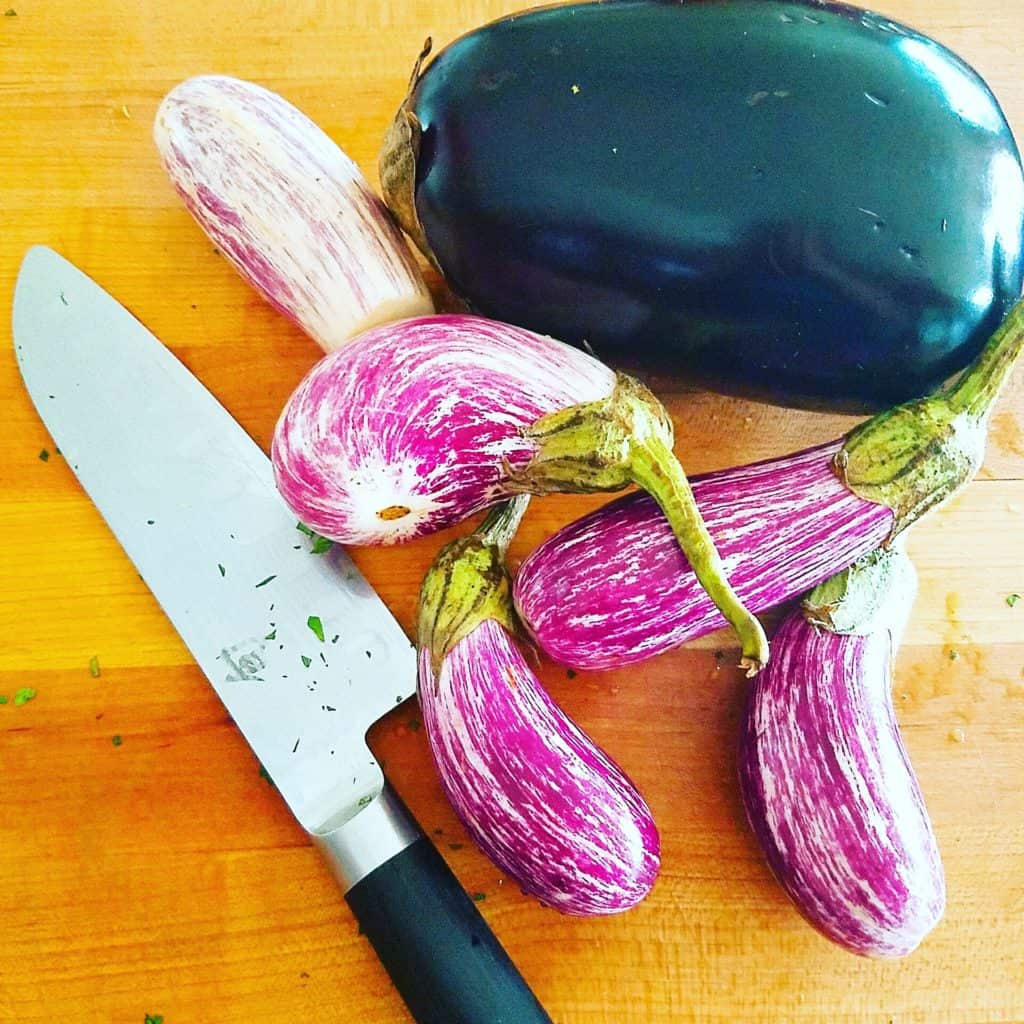 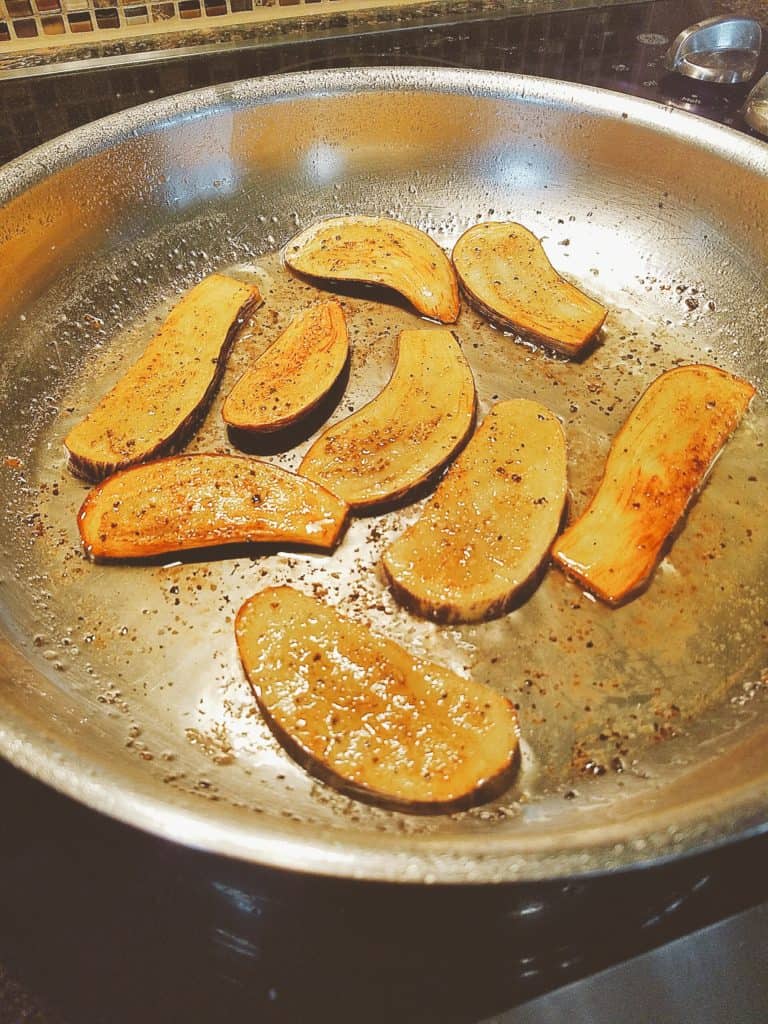 I suppose I can describe it best by saying moussaka’s akin to lasagna, with some exceptions being there’s minimal cheese and the pasta is replaced by the crisp-fried eggplant. Also, the spice of the meat is quintessentially mediterranean with its allspice, cloves and cinnamon. It’s finally topped with a luscious, buttery béchamel sauce- one of the infamous mother sauces made so prominent by the man with the master plan: Auguste Escoffier. My take has a sharp, tangy goat cheese to add some funk to it.

So, “Why the insult to your offspring?” you may be asking.

I’ll tell you why.

When Twink 1- the boy child- sniffed dinner being made he came down to inquire what was cooking. My usual response, “Food,” was replaced by the desire to impress and excite my precious bunny-dropping. “I’m making a traditional Greek dish, Cupcake! (<—see what a devoted mom I was) Moussaka!” I awaited the admiring look of esteem sure to blaze across his face, and instead was met with the most obnoxious guffaw I’d ever heard.

The next few minutes were replete with me screaming to, “Stop all that doggone snorting and rolling around on the floor!!” and, “Be quiet!!!!” and the Twinks completely disrespecting me in my own house.

Now, I find a good pun hilarious. Had they been old enough, I would’ve shown them My Big Fat Greek Wedding- where it was said first and was actually funny (the bunch of bootleggers)! THAT would’ve been completely apropos, but I was all in my feelings and they were still laughing at me. So, no Toula and “EEE-yahn” for them! Once they settled down, and I stopped rolling my eyes, and when the soldier came home, we sat down to eat a civilized meal. That was, until, my husband said, “This is so good, Marta. What’s this called?”

The sniggers and silent convulsions began in earnest, as the Twinkies looked at each other and burst out with, “MOOSE-CACA!!!”

I finally got over the insult and accepted the lavish praises for a meal well-done from my now seraphic bundles of love. Sure, I side-eyed them a few times for sincerity, but I believe they’re truly repentant. Just, if you plan to make and serve this to your cherubim, call it “Greek lasagna.” 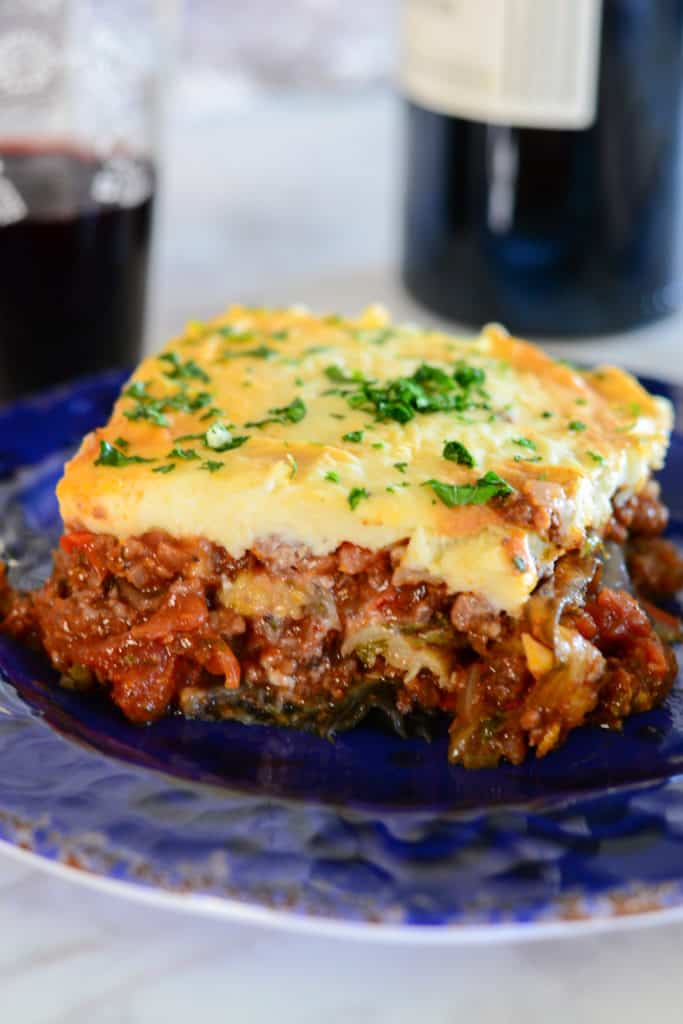 There are some things to be aware of before beginning. The first thing is that eggplant is like a sponge, so oil for frying should be conservative. Just enough to keep the eggplant from sticking, and blot the eggplant throughly after frying. Another tip is to allow the baked moussaka to sit at room temperature for at least 30 minutes prior to slicing and serving. I even like to prepare it the day before and reheat it in the oven. This allows the moussaka time to set up properly and prevents the dreaded, “I’ma just run ALL ovah yo’ plate!” fiasco. It’ll all still taste delicious, but it’s just a culinary bummer when it happens.

So, how awesome will your friends think you are when they ask, “What did you make for dinner tonight?” and you’re all, “Oh, just a moussaka. The béchamel was diviiiine, too!” Psht!! What!?! I’d totally be impressed. Go you.

Try it out, see what you think and tell me below what your munchkins or peoples said when you told them the name. 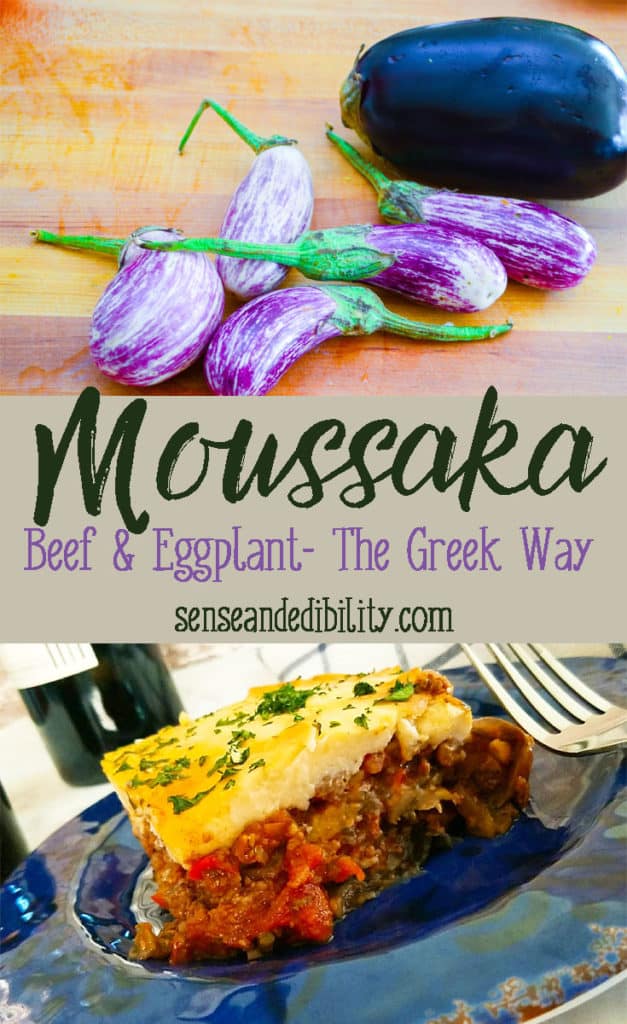 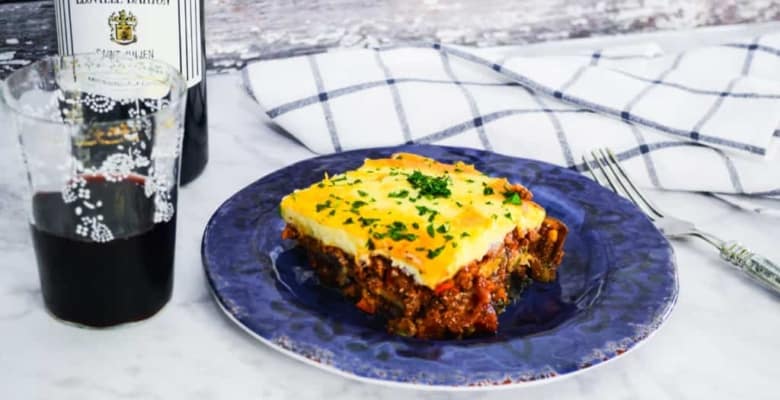 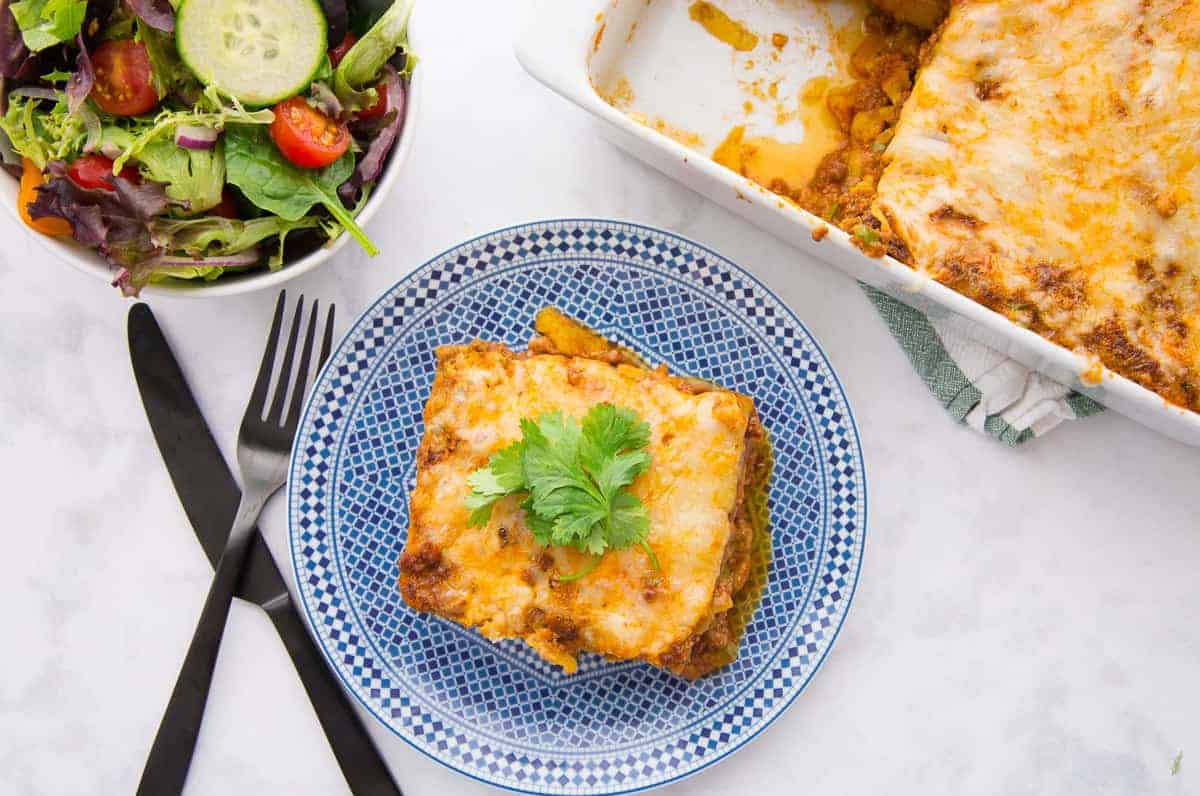 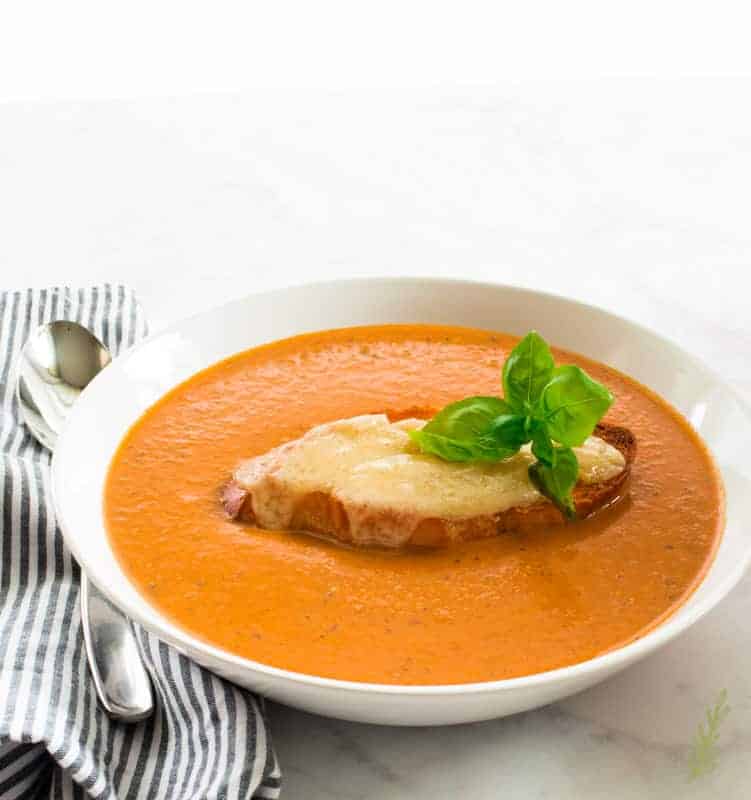 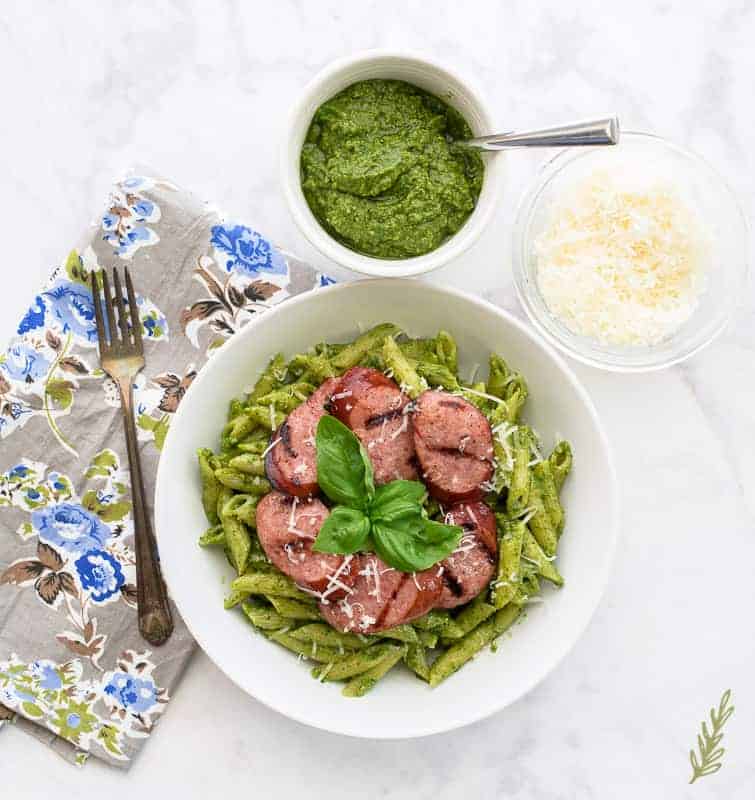 Penne in Pesto Sauce with Grilled Sausage: Dinner in Twenty