April 28, 2020 by Marta Rivera
Make a pitcher of Puerto Rico's favorite cocktail and sip with joy!
Get RecipePrint Recipe
2201Shares 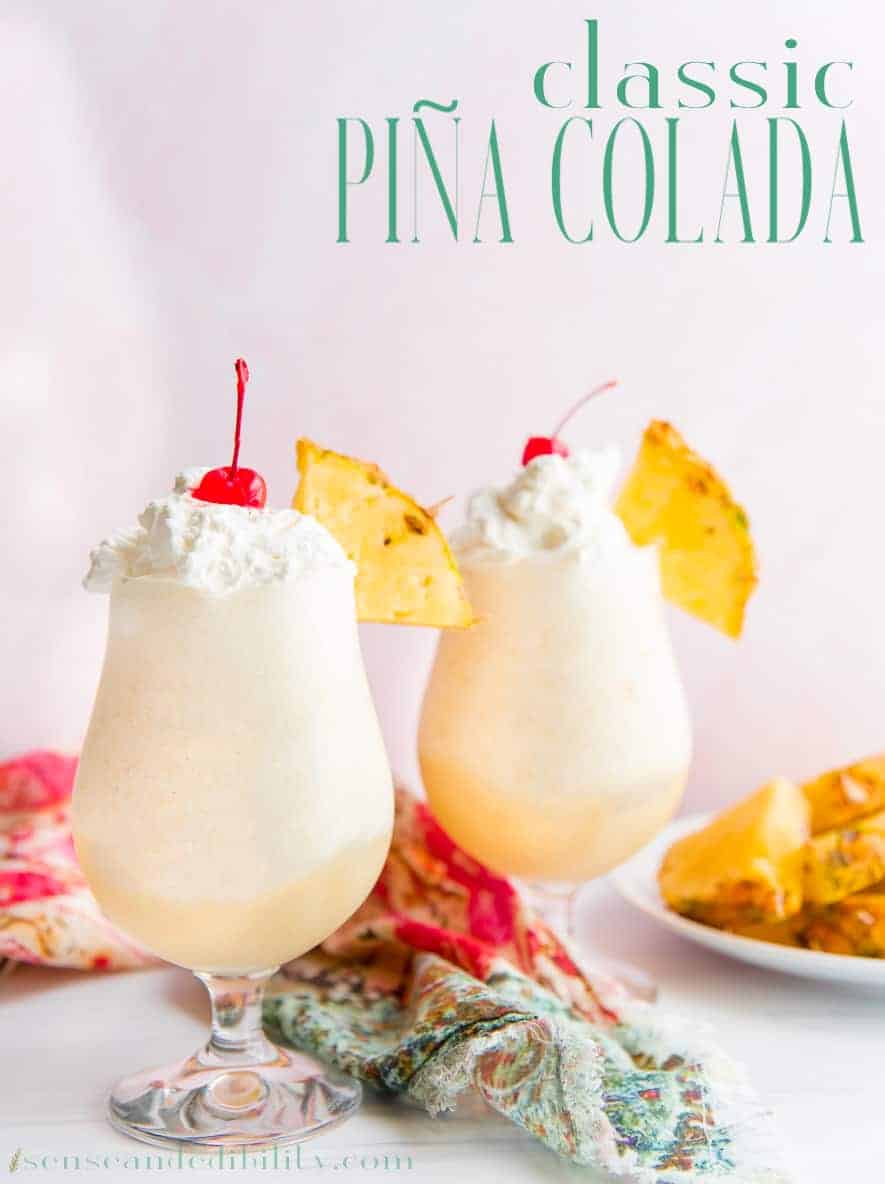 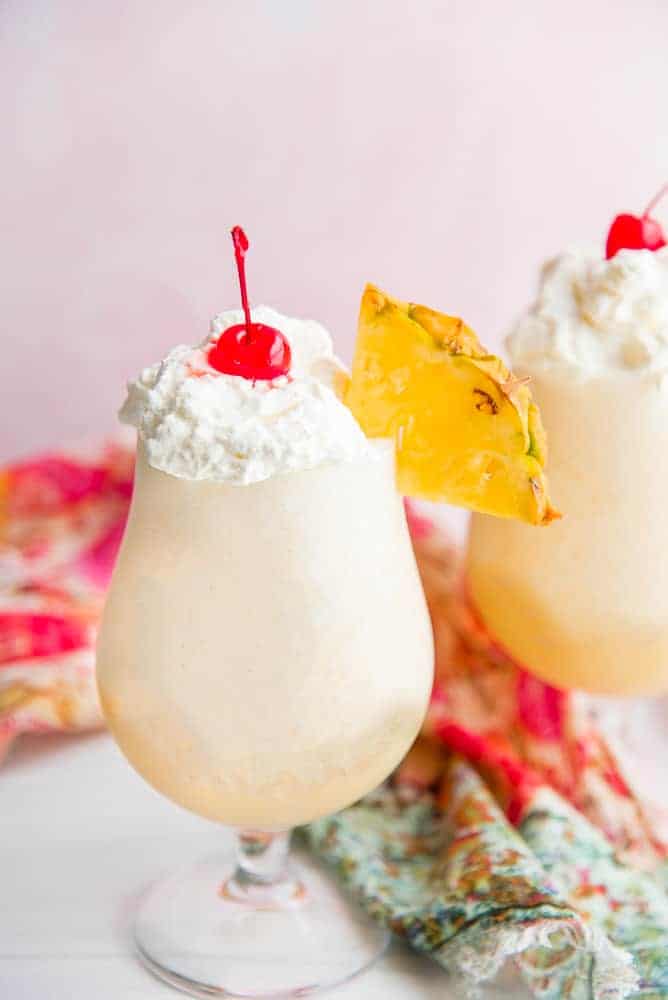 If you’ve had the privilege of visiting the beautiful island of Puerto Rico, I really hope you made time to taste Piña Coladas at at least one watering hole. A frozen rum drink made with creamy coconut and tropical pineapple, Piña Coladas have been Puerto Rico’s national drink since the late seventies.

The Drama Behind Piña Coladas

The drama that surrounds the origin of the Piña Colada is hilarious. Well, I mean, it’s not “drama” drama. It’s more like one dude flexin’ on another one. According to legend, whomever made piña coladas first, did so as a way to appease tourists and the drink became a success. Isn’t it funny how all recipes began with a harried chef or bartender who needed to make some royal or obnoxious tourist happy?

Supposedly, the first person to create the piña colada was a bartender at the posh Caribe Hilton in San Juan. According to him, he created it in the late 50s. But, then, in the early sixties, a restaurant in Old San Juan, Barrachina, claimed their bartender created the cocktail. So, they said, “Well, how about we plaster this MARBLE PLAQUE on the outside of our place claiming we invented the drink?!?” And, guess what? That’s exactly what they did!! You can’t tell me that’s not the ultimate flex. How does the Caribe Hilton respond to a freakin’ memorial that claims they didn’t create jack? They don’t, that’s how. Well, ever since, there’s been a debate about who invented what and when.

Not that any of that even matters because everybody and their mother makes amazing piña coladas in Puerto Rico. If you drive down the highway from San Juan to Loíza, alone, you can choose from tons of kiosks on the side of the road that are blending these cocktails. And, you know what? They’re all amazing. Even if you are a tourist, you don’t need to jostle with the other travelers to experience “authentic” piña coladas. Go to the quiet towns and have a seat at any bar and you’ll be amazed.

What isn’t debatable is what goes into piña coladas. Pineapple, usually in the form of juice (and sometimes fresh fruit) is a must. Coconut- by way of cream of coconut- and rum are also essential. The most commonly used rums are white or gold. Ice, to make it slushy, and your choice of garnishes to make it purty.

What you’ll need to make these Piña Coladas 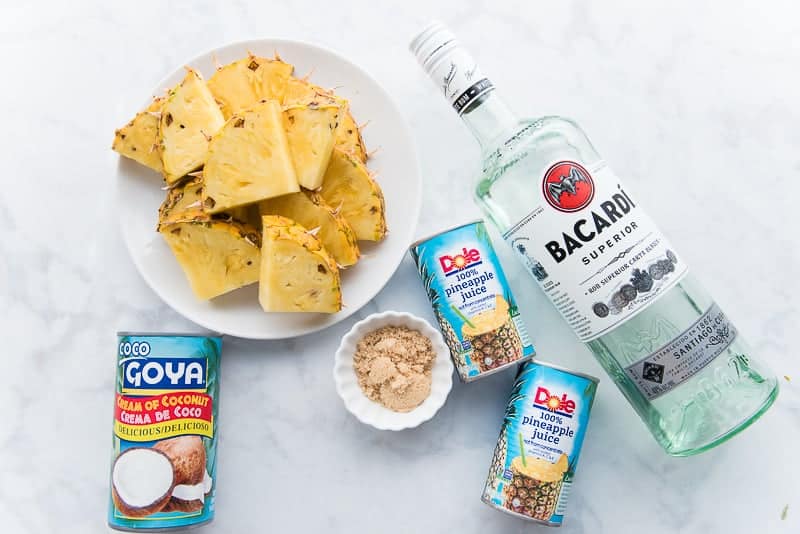 For starters, you will need a can of cream of coconut. You’ll also need pineapple juice, white (or gold) rum, brown sugar (this is optional), pineapple chunks (also optional), and a few handfuls of ice. A garnish of whipped cream is common. I like to add a slice of fresh pineapple and a maraschino cherry to my cocktails as well. 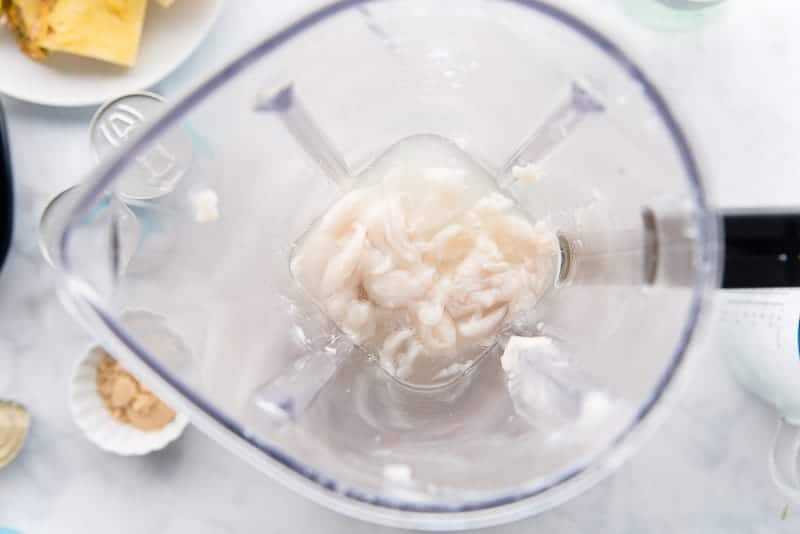 Begin by adding the cream of coconut to your high speed blender. I avoid putting ice in the blender first because my drink ends up with more ice chunks when I do. In this recipe, I use a whole can of cream of coconut. It’s mainly because I have no use for the half a can of the stuff that will be leftover. I mean, no other use except to make more piña coladas. So, why not just make a whole pitcherful of the stuff? I also use a whole can because I like an even balance of piña to coco flavor.

What’s the Difference Between Cream of Coconut and Everything Else?

Cream of coconut is not the same thing as coconut cream or coconut milk. If coconut cream and coconut milk are sisters, cream of coconut is their cousin who the family only sees at weddings and funerals. They all take meds to make their family feel more normal. That means, all of these canned coconut products have added stabilizers (like guar gum) to make them shelf-stable. Let’s briefly discuss what makes them different.

Coconut cream and milk are the unsweetened products of coconut meat and water that’s been blended together to form a coconutty liquid. Much like cow’s milk, their names “cream” and “milk” are indicators of how rich (or fatty) they are. Cream is much richer than milk is, as it has a higher percentage of coconut fat to water in its makeup. Coconut milk has less coconut fat so it’s not as rich. Both of these coconut products are used in cooking, baking, and cocktail-making. For the sweeter recipes, you may need add sugar to sweeten them up a bit. When baking with coconut cream, be mindful that its higher percentage of fat may alter your recipe’s outcome.

As for our recipe’s star, cream of coconut, she’s a whole different beast. Instead of blending just coconut meat and water together, cream of coconut has a good amount of sugar that’s also added to it. As a result of the higher sugar content, it’s not an ingredient you’d use in savory recipes. Therefore, cream of coconut is used, almost exclusively, in dessert and cocktail recipes.

Yes, there’s also coconut water. Coconut water is the drunk uncle who no one wants at the party. I avoid bottled coconut water like the plague because it tastes artificial. I mean, I have sipped it straight from the coconut, so there’s that. Because I think it’s blasphemous, I won’t go into further detail on it. I want no parts of it.

Back to the DRANK… 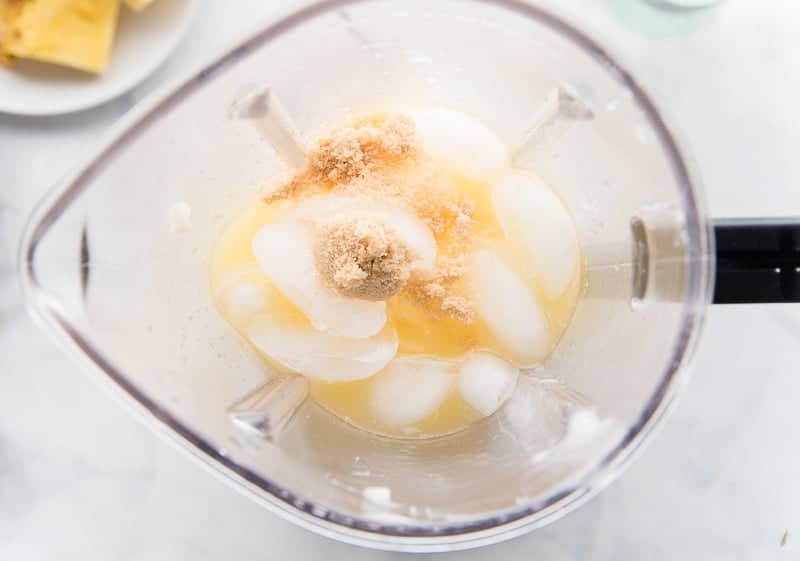 Okay! Now that we’ve beaten the coconut horse to death, let’s reward ourselves with our piña coladas.

Now’s a good time to add the ice and, my secret, a hint of brown sugar. While, again, totally optional, I love the depth of flavor the brown sugar adds to the drink. 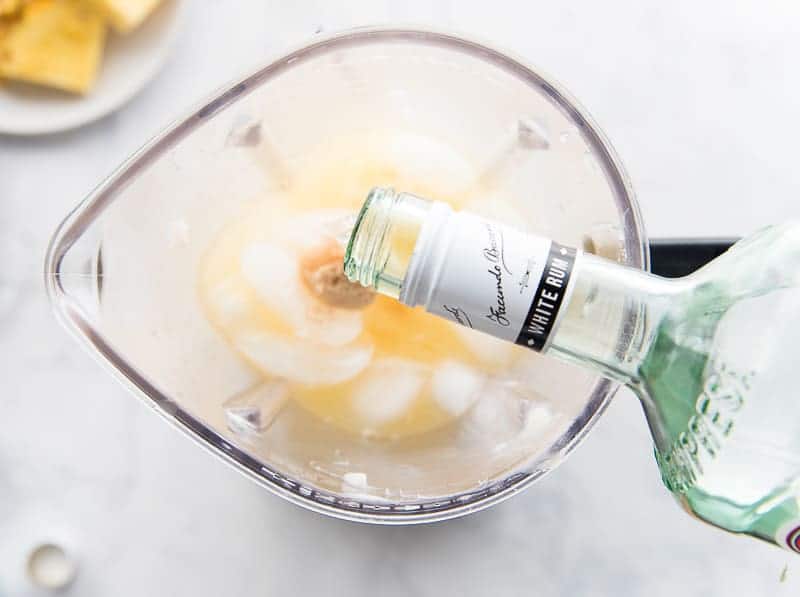 Please don’t add gut-rot rum to your piña coladas. Yes, it’s a mixed drink, so you don’t need to bust out a $100 special edition bottle. But, you should at least use mid-shelf liquor. Bacardí is probably the rum most associated with piña coladas, but it’s not Puerto Rican rum. It’s Cuban. Yes, it can still be used, as you can see from my image, but if you want to keep this as Puerto Rican as possible, use a rum from Puerto Rico like Don Q or Palo Viejo.

Whether to use white or gold (or amber) rum is simply a matter of taste. If you’re into a clean, crisp cocktail, use the white. Do you have an affinity for deeper, sweeter flavors? Go with the gold. The difference between the two is a matter of how, and how long, one has been aged. White rum is not aged, nor is it stored in special casks. Gold rum is aged for a specified period of time, usually in wooden casks. That’s what gives it its telltale color and flavor.

I had white Bacardí on the shelf, so that’s what’s going into my blender. 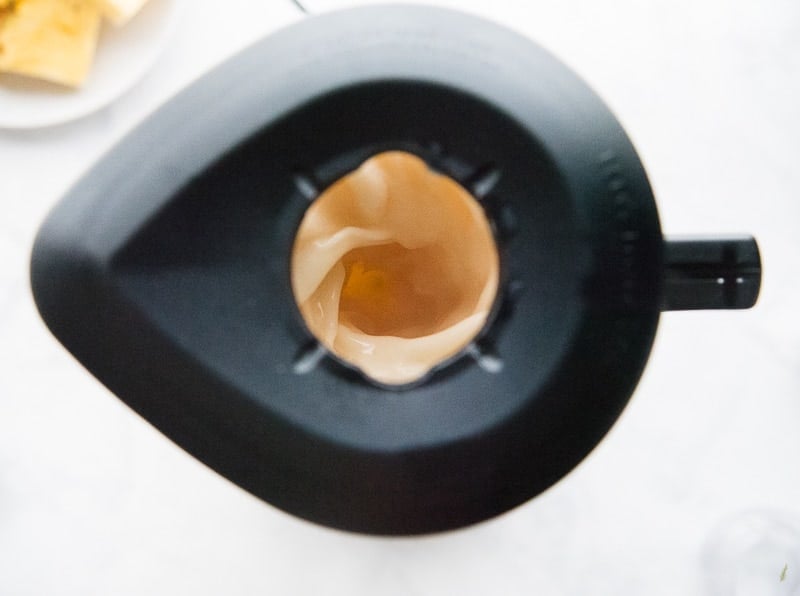 Place the lid on your blender and blend the mixture for 30 seconds to 1 minute, or until smooth.

Pour and Garnish your Piña Coladas 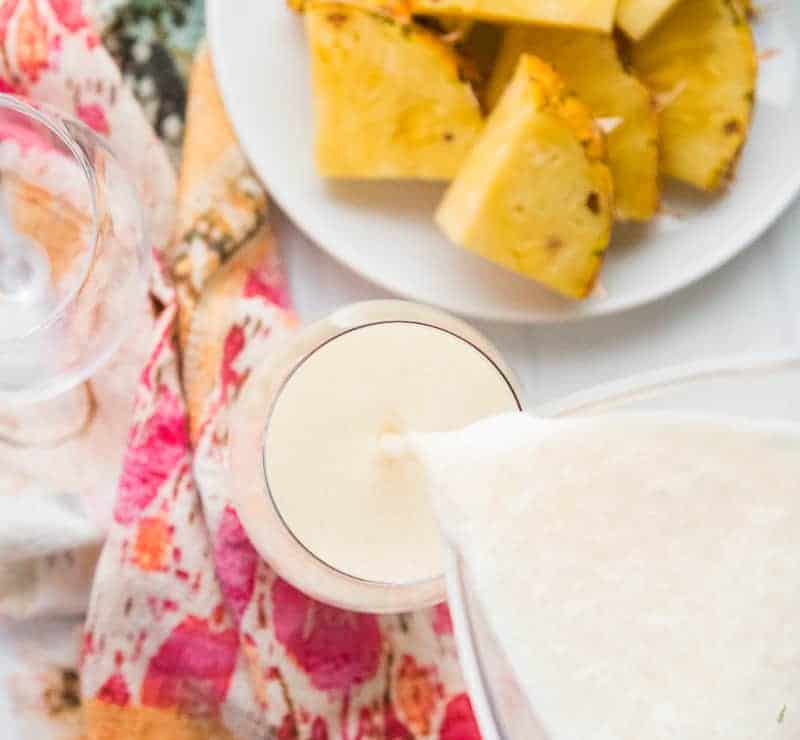 That’s it! I love these easy-to-make recipes, don’t you? 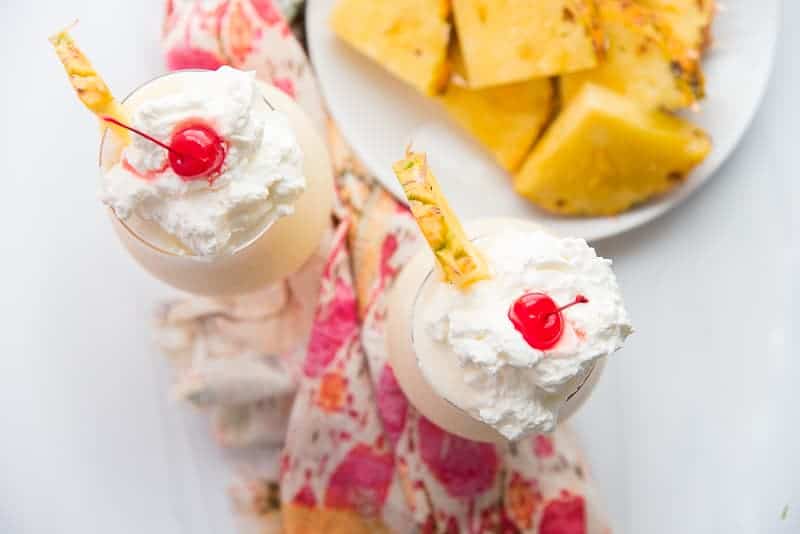 Serve the drinks as is, or garnish the piña coladas with sweetened whipped cream, a maraschino cherry, and a slice of fresh pineapple. As you can see, I went with all of the above. Don’t fuss about with piping that whipped cream, either. Just drop a spoonful on top and keep it moving. 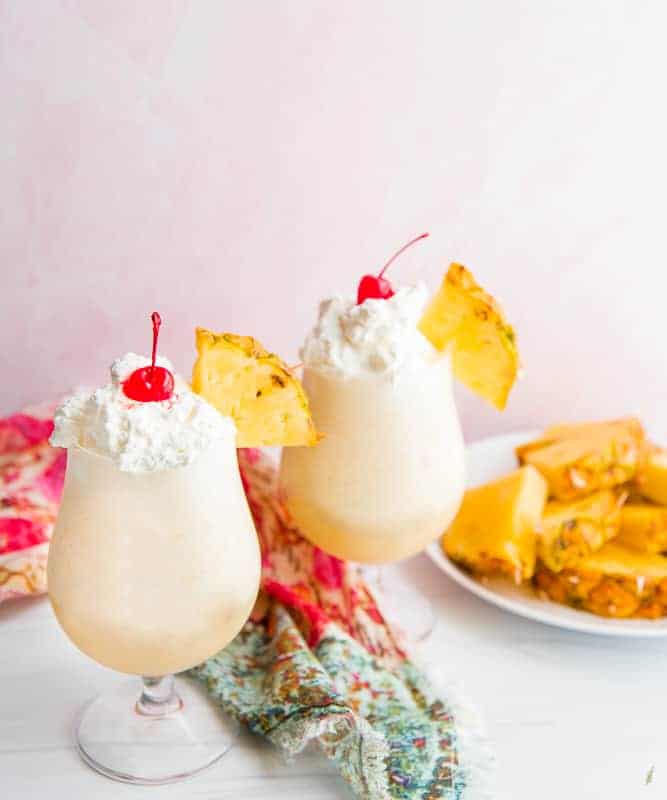 If you’ve never had a homemade piña colada, you may be surprised that the drink will settle as it sits. The reason why it doesn’t settle in bars is because most bars use slushy machines to make theirs. Settling in your piña coladas is totally normal as the fat from the cream of coconut wants to rise above the lighter juice and rum. Don’t stress over it, just use your straw to swirl it together again. 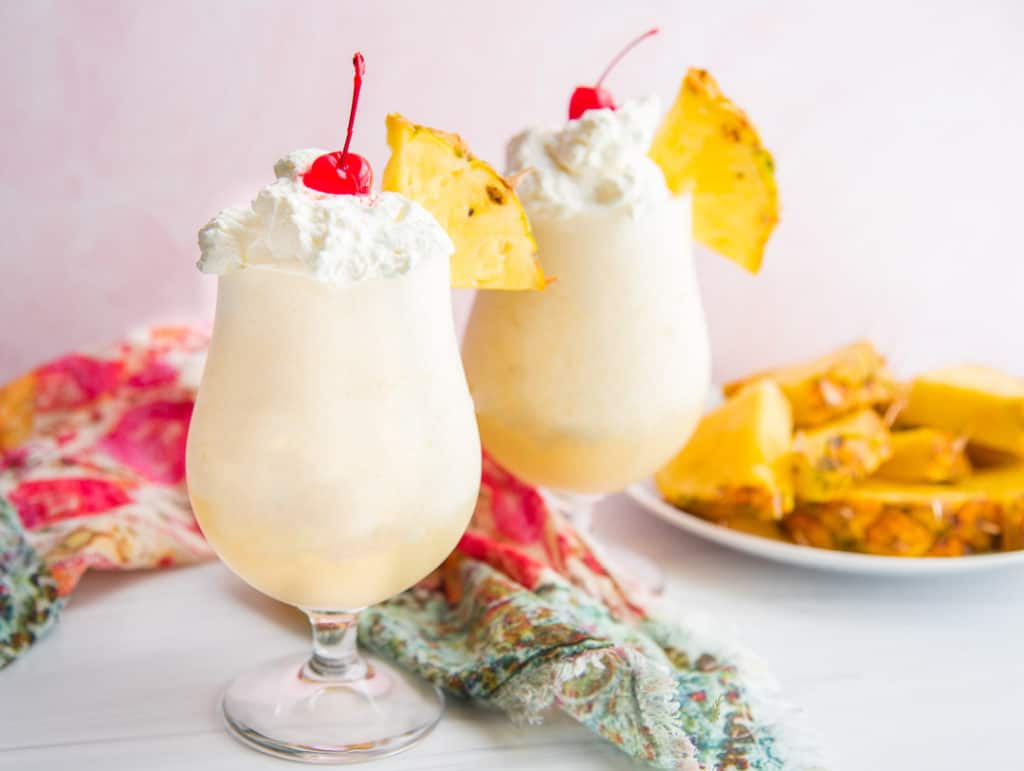 I mean, after a few sips, you won’t even give a damn. 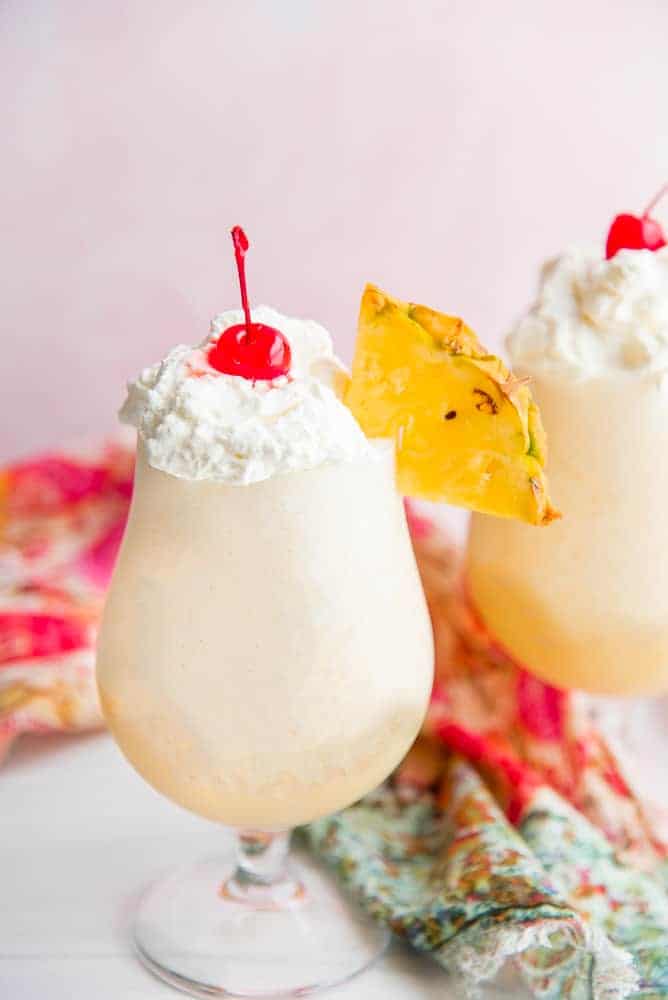 If you have little munchkins who will stare you down until they get their own piña coladas- like I do- go ahead and whip them up a batch of their own virgin versions. Simply omit the rum and add a little bit of water to the mix instead. Kids need a little love, but they don’t need a little rum, so leave it out.

I hope you like my version of the national drink of Puerto Rico. Please, let me know what you think of these piña coladas and be sure to pin and share this recipe with your world. 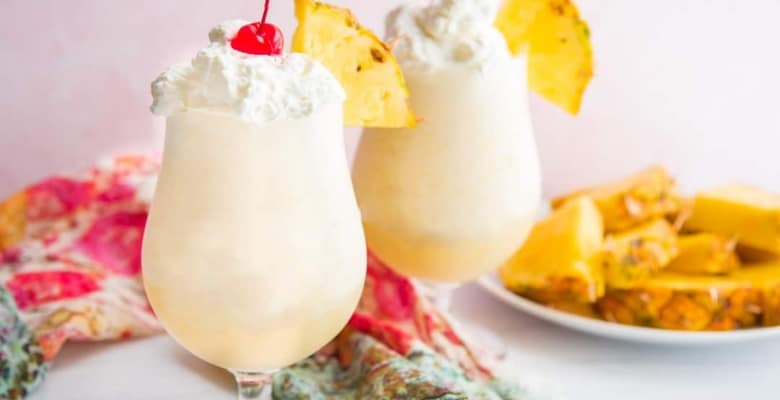 To store: if you're making this ahead of time, store the mixture in a freezer safe container in the freezer. Stir the mixture every 15 minutes to create a "slushie" consistency.  To Make Virgin Piña Coladas:
Omit the rum and replace it with 1/2-1 cup of cold water. Blend as instructed.  For a lighter coconut flavor:
Use 7 1/2 ounces of cream of coconut instead of the full can.

If you like these Piña Coladas,
you’ll love my other libations: 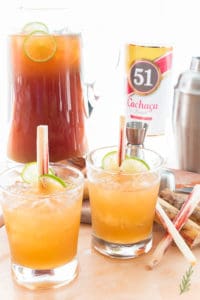 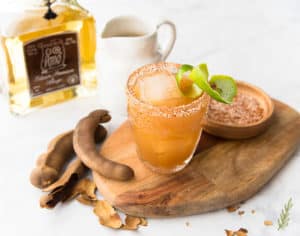 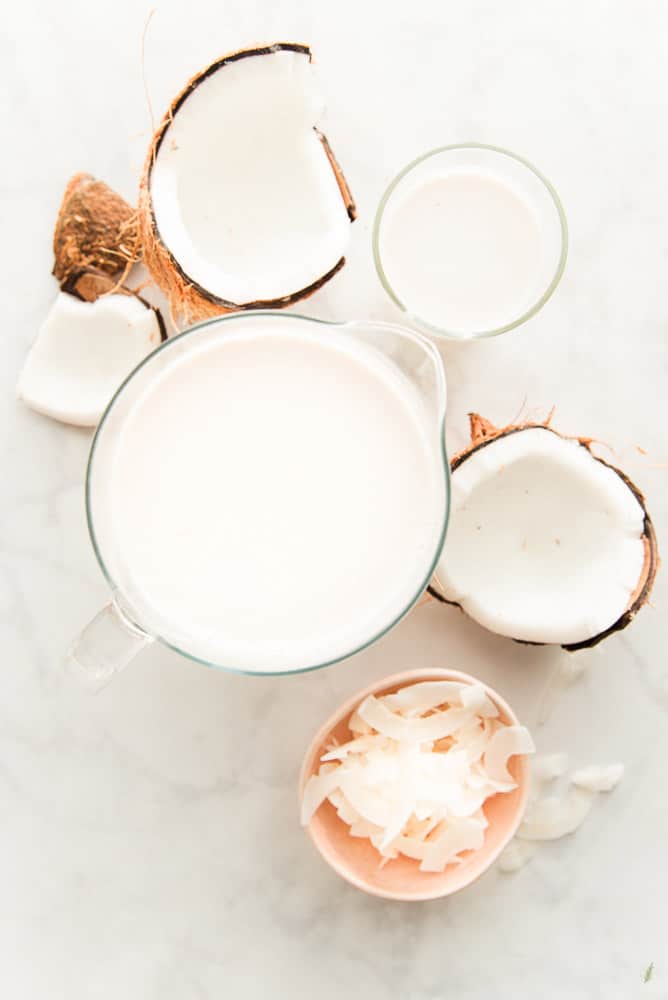 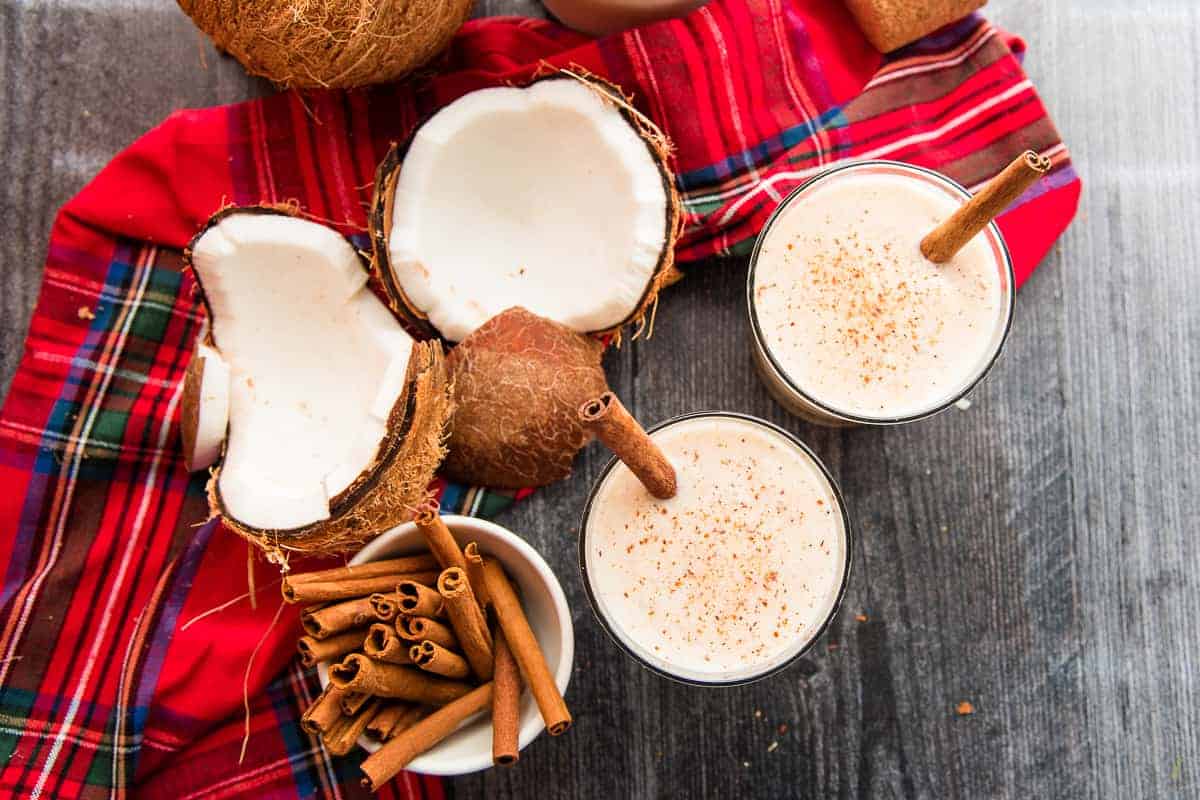 This looks delicious! Pina coladas are one of my fave drinks, if not my favorite. It would be fun making it from scratch.

They’re fun AND so delicious when made from scratch, Marysa! Enjoy!

Pina Coladas always put me in the mind of warm summer vacations in a tropical place. As much as I’ve cruised and been to the Caribbean, I have had a Pina Colada I think because of the coconut. My aunt absolutely loves them though.

Coconut is one of my favorites (and it’s a favorite of Puerto Ricans) so I’ve had these more than I can count.

haha!!! That’s hilarious!!! I had no idea this was the history!!! lol We’re barbecuing today and I just made us some with your recipe!! Sooooooo good!!!! Thanks for the recipe!

Made your recipe for Pina Coladas yesterday as written. The fresh pineapple makes all the difference. Wonderful cocktail!

I’m really glad you enjoyed them, Phil! I agree, the fresh pineapple adds a bit more freshness to the cocktail. Thanks for commenting.

Pina Coladas are definitely delicious on a hot summer day (and we have no shortage of those in North Carolina). And since vacations are probably not in the cards this year, this is a great way to feel as if you’re in the tropics.

Absolutely, Maria! This is making things a little less sucky.

That’s a delicious taste of summer right there. I just wish I was on a beach relaxing with one right now!

You and me, both, Amanda!