Pineapple 101: the Efficient Way to Cut a Pineapple

March 31, 2020 by Marta Rivera
Save money by cutting your pineapple at home with my efficient, waste-reducing method.
Get Recipe
422Shares 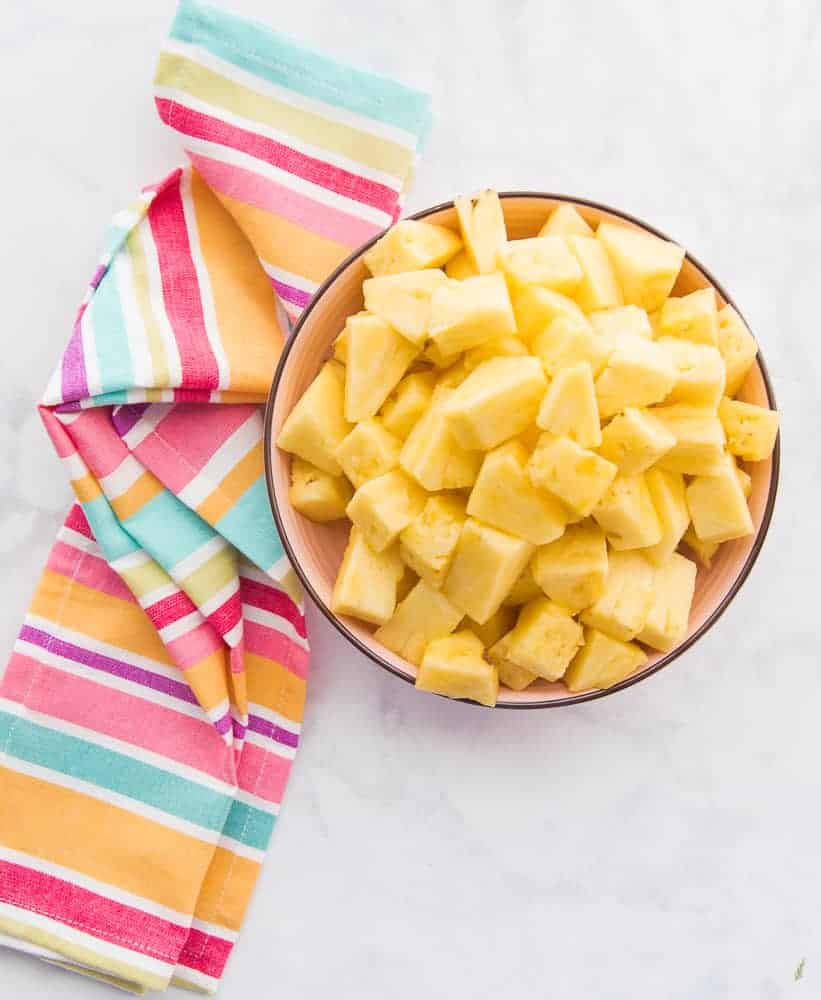 It may seem very basic, but there are many out there who don’t know much about Pineapples. More importantly, they’re unsure of the correct way to cut a pineapple for using in their favorite recipes. While it may seem to be a cumbersome fruit to handle, I’m going to show you the most efficient way to produce the edible gold you need for your cooking, baking, eating, and cocktail needs. And, by “efficient”, I mean the easiest, most economical way to cut a pineapple.

I’ve seen so many ways to cut pineapples on the internet. Seems like all of my friends have their own ways to cut these fruits, too. What makes me cringe is the amount of loss I see when most people cut them. Call me crazy, but I still think about product loss; it’s as if I’m still purchasing and producing for restaurants. But, if you think about it, I am. Except, I’m purchasing and trying to save money for my own kitchen. Because of that, I want to get the most out of this expensive fruit.

Let’s learn a little about this fruit we know and love called the pineapple.

What’s the Deal with Pineapples?

A trip down Route 140 in Puerto Rico will take you to the heart of the municipality of Barceloneta. Called “La Cuidad de las Piñas”, or the City of Pineapples, this is the land of pineapple plantations. The first time my husband drove me through a pineapple plantation I hung out of the window like an excited puppy. I greedily inhaled the sweet perfume that permeated the air which was produced by the fruits that were left to ripen on the stalk.

Pineapples are so named because of their spiky peel and shape, both of which resemble a pine cone’s. Unlike bananas, the fruit must be left on the stalk to ripen. Their flesh and skin are great indicators of how ripe they are. Very green skin with a pale yellow flesh, and you’ll have mildly sweet fruit. Yellower skin with a golden yellow flesh gives you a honey-sweet, very ripe pineapple. All pineapples contain a woody core, which most people throw away. In my family, my husband eats the cores because they’re a great source of fiber.

The average weight of a pineapple is between 2-2 1/2 pounds, while personal (or dwarf) pineapples can range in weight from 1- 1 1/2 pounds.

This fruit is a vitamin C, fiber, and protein bomb. One pineapple provides more than 700% vitamin C, as much protein as yogurt, and more than half your necessary fiber allowance. Granted, you’d have to eat the whole thing by yourself, but it’s still very nutritious.

How is Pineapple Used in the Kitchen?

Of course, it’s a great fruit to eat on its own or mixed into cakes and other desserts. Puerto Rico has its famous piña colada cocktail. A world renowned drink that was crafted in a small restaurant in Viejo San Juan.

Because of worldwide cultivation, pineapples are available year ’round, but their peak season is March through June.

When shopping for pineapples, avoid fruits with dried, greying leaves or soft brown spots in the skin. Look for yellowing skin as this indicates a perfectly ripened pineapple. Use the fruit soon after cutting or freeze it for later use in smoothies or as a marinade base.

What You’ll Need to Cut a Pineapple 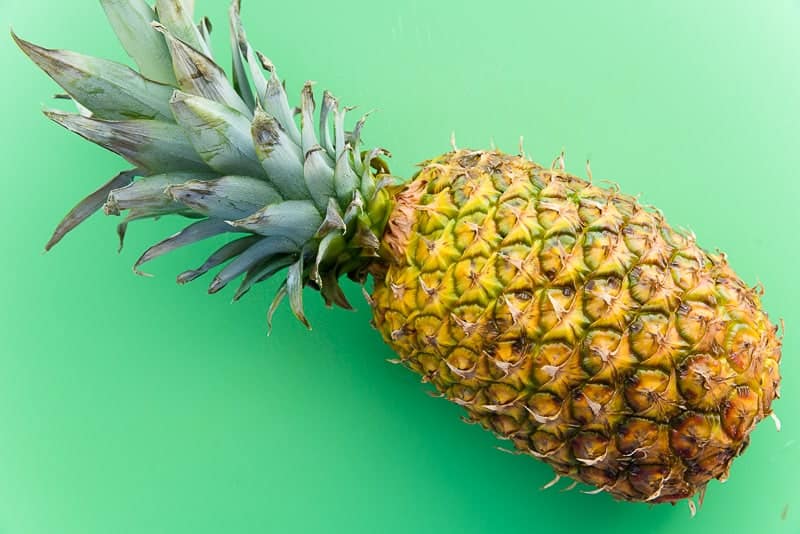 Because I want to get as much from my pineapples as possible I use only two tools: a large cutting board and a sharp knife. While you may think it doesn’t matter- how much skin you cut away- it’s always important to be conservative when breaking your food. The more waste, the more money you’re throwing away. Rich people don’t become (or stay) rich by chucking pennies out of the window. Think that way when attacking this fruit.

First, wash your pineapple to get rid of any dirt or pests. Dry the fruit to keep it from sliding around on your cutting board. As you cut the pineapple it’ll release some of its juice, which will cause the board to become slippery. The less water you start with, the less likely you are to cut yourself while trimming the fruit. Keep a dry kitchen towel at hand, as well. Use the towel to mop up excess juice or to wipe away the spindly bits that will come from cutting the peel.

Use a Sharp Knife to Create a Stable Base 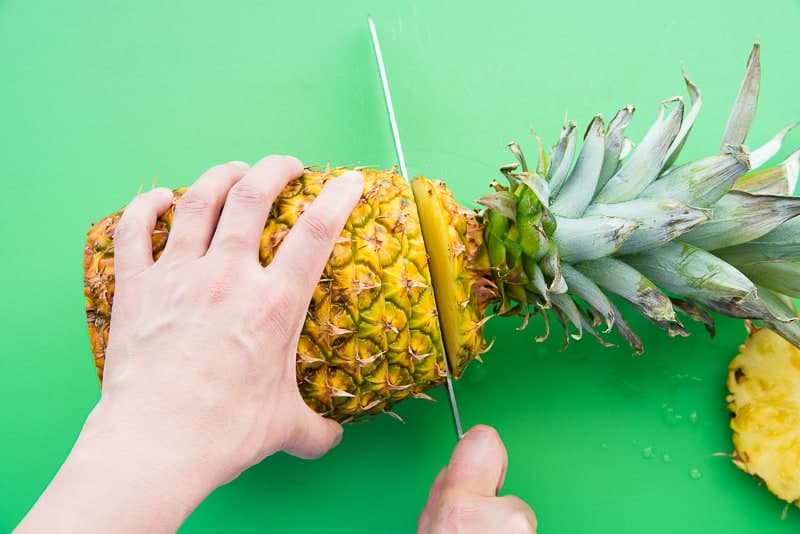 Once the pineapple has been cleaned and dried, use a serrated knife to slice off the ends of the fruit. This two-fold step creates a stable base on which to begin peeling your fruit. Cut only an inch of each end off of the pineapple. 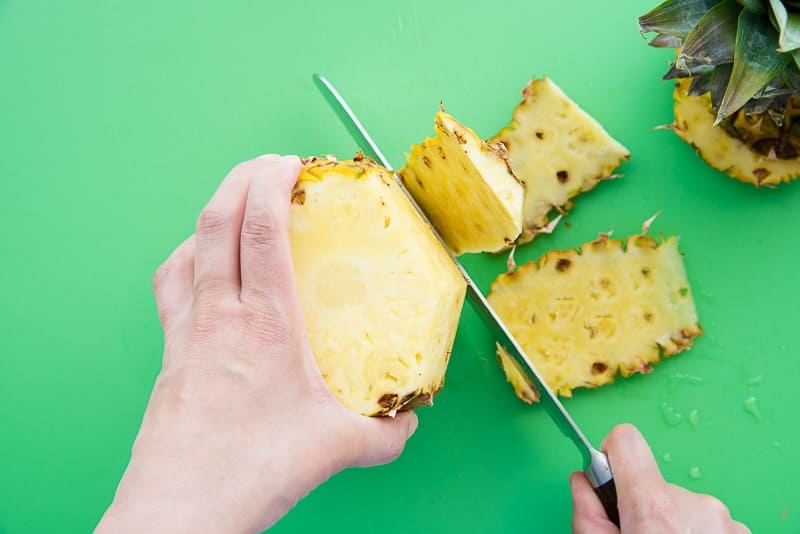 Once the pineapple’s crown and root are removed, stand the fruit up where the bottom (root end) was. Place your knife about 1/8″ inch inside the peel and, using a quick sawing motion, cut from top to bottom. Remove a strip from the pineapple before returning to the top of the fruit and repeating the process.

Continue to cut the peel away in this manner until the peel is completely removed from the flesh. Scan the fruit and go in with your knife to remove any of the papery spindles that may remain in the flesh. Discard the top and bottom (unless you want to attempt plant them) and the peel.

Cut the Pineapple Into Manageable Pieces 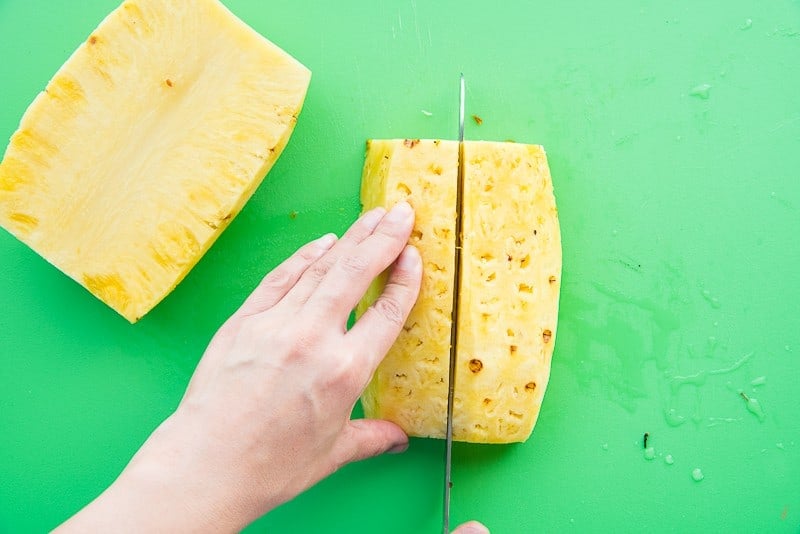 Truth be told, even if I want to make something like pineapple upside-down cake, where those rounds are needed, I’m not going to use a fresh pineapple. I’ll use canned fruit instead of fresh. So, I never really core the pineapple for the sake of obtaining rings.

I skip all of that apple core drama and cut the pineapple in half lengthwise. Lay the halves flat side down and cut them in half again (down the length)- leaving you with quarters.

Remove, and Save, the Cores 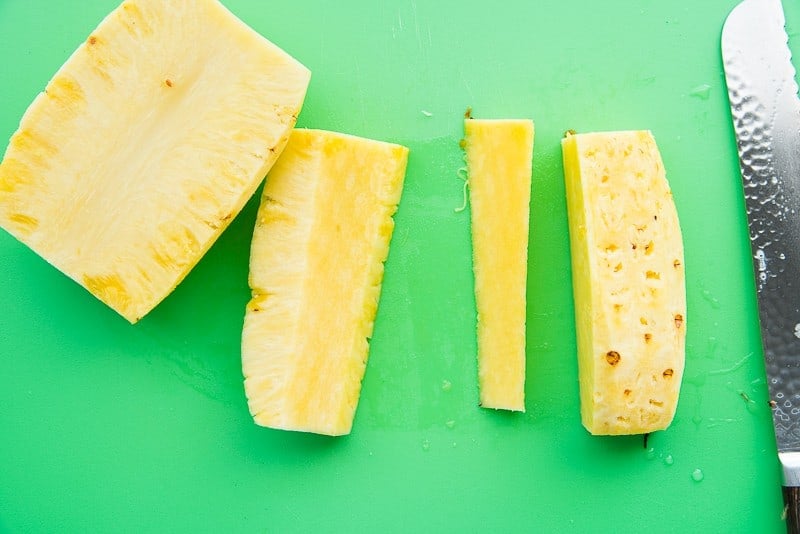 Because the core of the fruit is so tough and fibrous, most people discard it. I never throw my pineapple cores away. They’re my husband’s favorite part of the fruit, so I always bag them up for him to eat as a snack.

To remove the core, lay a quarter of pineapple on its flat side. With your knife at a 45° angle, cut into the fruit, lengthwise, and slice away that corner of the fruit. Remove the core from the pineapple.

Snack on the cores to amp your daily fiber intake or throw it away (sad face).

Cut the Pineapple into Wedges or Spears 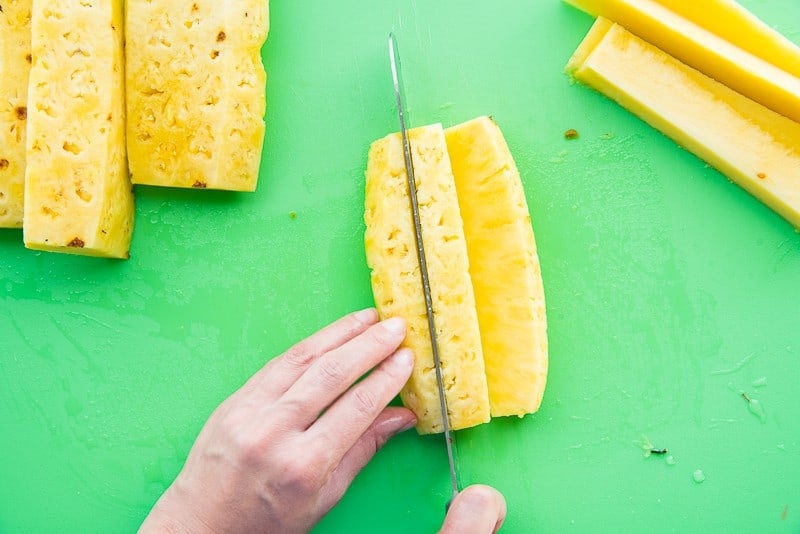 At this point, you can slice the pineapple crosswise into wedges (triangles) or cut them down further. If you need wedges for your fruit display, just slice the quarters into 1/4″- 1/2″ thick slices. Done!

I go farther and slice the quarters into thirds, lengthwise. Now, instead of quarters, they’re spears. Slice these in half and you have a great snack for your older kiddos.

Slice the Spears into Chunks or Even Further… 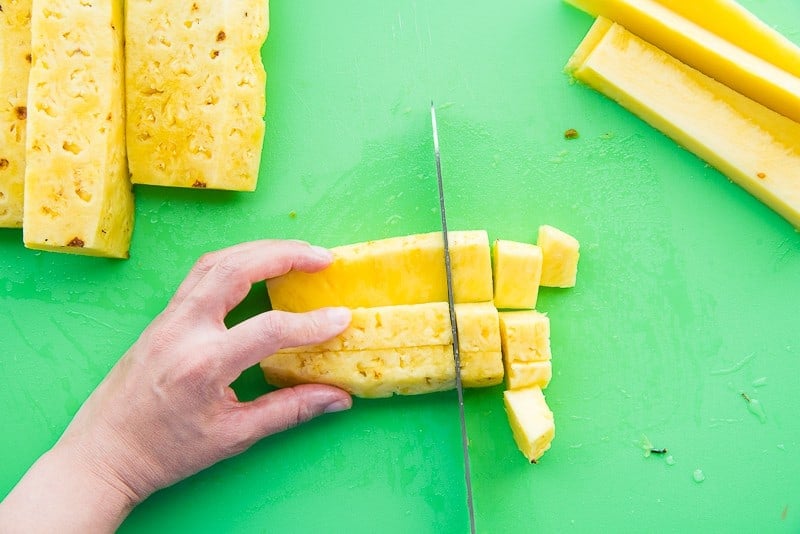 To use the pineapples in smoothies, or to munch on, turn the spears horizontally on your cutting board. From there, slice the spears into 1 inch chunks.

At this point, you can puree the fruit and make crushed pineapple, juice it, or eat it as is.

Use the Pineapple as Needed 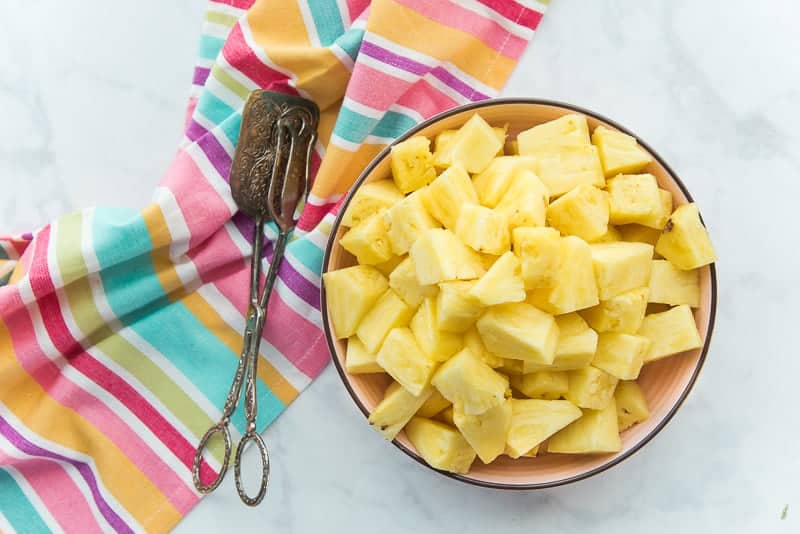 If I plan to use pineapple soon- say, within a day or two- I transfer it in a food storage container and store it in the fridge. Because we like to eat it fresh, as well as use it in smoothies, I usually leave half of it in the fridge and freeze the rest.

Pineapple is very freezer-friendly. Simply store it in a freezer storage bag for up to six months. It’s a great way to add “ice” to your smoothies without watering them down. 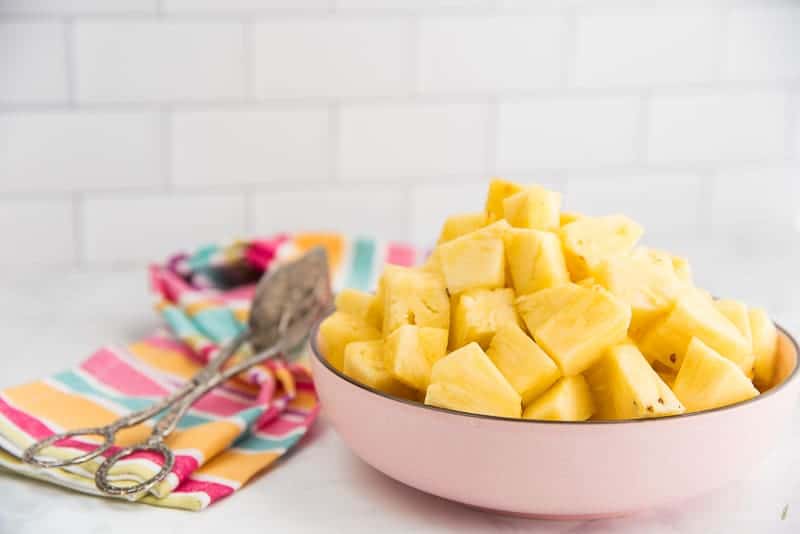 Be sure to use this efficient way to cut your next pineapple. It easily saves you a couple of cents each time you use this skill. 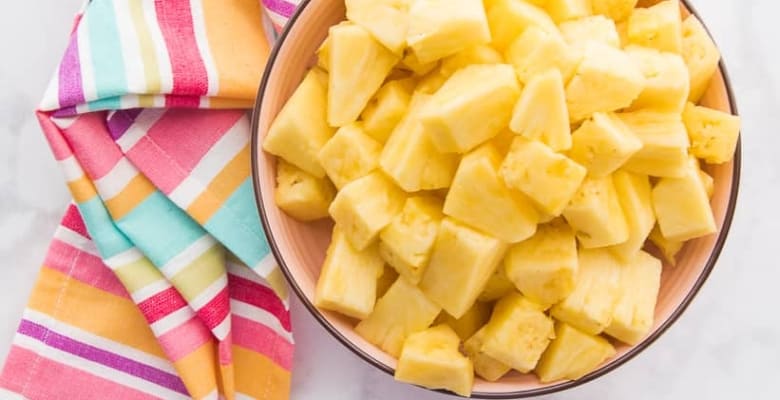 Pineapple 101: The Most Efficient Way to Cut a Pineapple

For pineapple chunks or crushed pineapple

Use your cut pineapple in your favorite recipes that call for it. Pineapple is great in smoothies, shakes, desserts, or pureed in marinades.

Check out my other How tos: 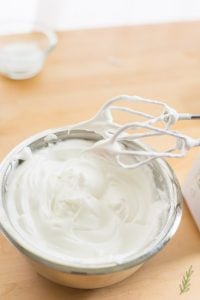 How to: Whipping Egg Whites 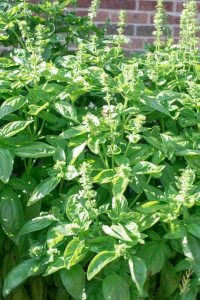 How to: Chiffonade Herbs

SO helpful, and thanks🥰🥰🥰 me and my mom wanted to make a fancy pineapple dish so she wanted me to thank you for this helpful recipe. thanks, and not that only she wanted me to comment, but I really thought it was very helpful of you to be so generous by making this recipe and so sorry for typing so much but all I want to say is thank you🥰😁

How sweet! I’m so glad she found it helpful and thank you for typing so much! Often, I hear all the bad things about my writing and recipes, but never hear the good, so I appreciate you!

How do you remove the eyes of the pineapple on the sides?

should i use a paring knife and go around them?

The tip of your vegetable peeler is a great tool for removing the eyes. Just insert it a little below the eye and twist counterclockwise to cut around it. A quick flip back will pop it out