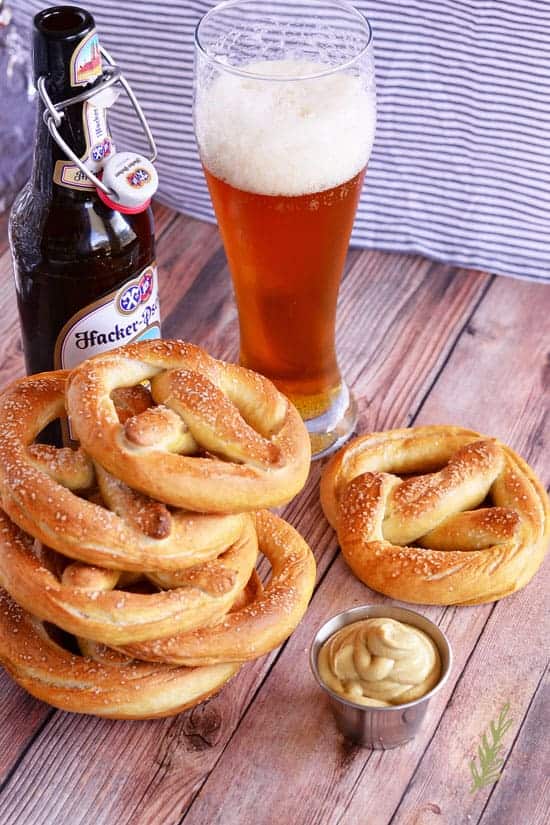 ‘Tis the start of a new year. I’ve already written “2016” when ending my date…four times…it’s only 10AM. I made zero resolutions this time around because I am the type of girl who starts a journal and writes in it for all of three days before getting bored; resolutions aren’t my thang. I’m pining today. The New Year’s celebrations always take me back to Germany. Odd, I know; but, it’s true. I matured a lot in Germany and learned to see past my nose, culturally. Every time we celebrate the beginning of a year, I, for some reason, drift back to our time in Deutschland. I get homesick for a country that isn’t even my birthplace. So, in my pining, I did what I do best, I cooked. Baked, to be more specific. I baked these “German Preztels”.

For me, Germany was a proving ground. Hector and I were newlyweds when we jumped the puddle from our Maryland duty station, to begin what would become a six-year tour in Germany. Hector and I had just celebrated our second wedding anniversary and it showed. We were super-immature and volatile- we were kids. Spoiled, bratty kids, and we were about to be on our own; we isolated from our families, in a foreign country.

Having arrived to Ramstein Air Force Base in December, 2001, with September 11th just having shaken everything we knew to be safe, we were suspicious of everyone and everything. The Army didn’t care about our distrust and expected us to adapt and overcome. Our sponsor tried to teach us how to navigate our new country. We didn’t do a great job of learning. For starters, Germany was in the midst of a nine-day snowstorm. Nine days, y’all. You’ve got a dude born and raised on a tropical island trying to figure out why he’s anywhere that snows for two days, let alone nine days. And his 23 year-old wife. Who gave up her cooking career to follow him. It was about to get live.

We were stuck in our barebones apartment with each other. No cable, no phone- our dog and us. Arguments ensued. Sulking followed. Then back to arguing some more. A little love-making thrown in because we had riled ourselves up, then we got back to arguing. We were a mess. I trudged to the Ramstein Shopette (think military quick mart) to use the pay phone; I called my mother, who lived in Texas. I screamed into the phone, “I’m coming home! I can’t deal with him!!”
“Well, how you gonna do that? You have money to pay for a plane ticket?”
“No! Can you send me some money?”
“Nope.”
“MA!!!! Please!!?!?! I can’t do this!!”
“Yes, you can. And you will. You’re in Europe for crying out loud! You’re in your early 20’s, no children. You get a job, pay off that stupid debt you all created acting like fools over here. Put some money in the bank and then start traveling. Stop sniveling, get your ass in gear and start living.”
*sniff, sniff*
“What did I say!?!? Stop all that damned whining!!!”
“Yes, Mami.”
“I love you. Tell my favorite son-in-law I love him too. Stop arguing like children and be good to each other.”
“Yes, Mami. I love you too.”

The walk home, in the snow, was excruciating. Not for the cold, but for the sinking feeling that I was really going to have to do this, this…”wife thing”. I wasn’t going to be able to walk out. Thank God for that. Thank God my mother had no filter. Thank God!

I pulled myself out of the depression I was starting to sink into, aced my driving test, took some basic German courses, and started submitting employment applications for every job I could remember how to drive home from. I landed my first job as aaaaaaaaaa…cuckoo clock saleswoman!! Yes, proud culinary school graduate that I was, I was selling annoying clocks. To be fair, I was also selling grandfather clocks, but cuckoo clocks were my big money-maker. However, I had bigger aspirations. I needed to get back into a kitchen. So I continued putting applications in for anything I could. Even in German kitchens. Never heard back from them, but I did, finally, get a call back from one cooking gig. In a daycare center. My thousands of dollars of education was going towards making food for three-year-olds. Stellar.

But! I was working. I was working and I finally felt like I had purpose again. The Soldier and I were no longer fighting. We paid off our debt. We were socking money away. I called my mother and said, “You were right.” “I know,” she said, “I love you. Enjoy life and enjoy your husband.” We booked our first trip the next weekend. Oktoberfest in Munich. What could be more enjoyable?

Anyone who has been to Munich has happened upon the ubiquitous Hofbrauhaus, but there’s so much more to the Bavarian city than beer. I distinctly remember the state of awe I was in when the Soldier and I happened upon the Marienplatz and laid our eyes on the Rathaus-Glockenspiel for the first time. I finally understood how tourists viewing Times Square for the first time felt. I, now, became the foreigner struck deaf, mute and immobile- and I was blocking the way of passersby. I was that girl. Well, so was Hector. Two sore thumbs, gaping at a huge clock with moving figurines and bells and whistles in the middle of a Bavarian “town” and we didn’t know what to do with ourselves. So we just stood there.

Eventually, hunger got the best of us…and angry Germans did too, so we moved on. Tripping over our own feet as we tried to walk whilst still staring at the magnificent sights around us. Munich during Oktoberfest is more than drunken debauchery, Germans know how to hold their liquor after all; it’s food, music, singing, dancing… it’s life! One of my fondest memories was seeing hundreds of pretzels threaded onto a wooden staff. I stared at it for so long that the fraulein running the booth became weirded out and just handed me one. Maybe it was her way of bribing me to get moving along so that I didn’t scare her other patrons; whatever it was, I was smitten. I had been feeling cheated because I’m not a beer-drinker, and thus far my fun was limited to living vicariously through Hector (who was throughly enjoying himself and his suds). But, now I was elbow deep in the culinary extravaganza that was Munich’s food halls, and I was living it up. And to this day I can still remember the first bite of that warm pretzel.

I developed many relationships with our German neighbors in our six years there and the more I learned about their cuisine, the more endeared to the country I became. Pretzels grew to be more of a favorite when I found that they were the symbol of the baker’s guild in Germany. How apropos! My favorite snack represented my trade! Later, I also learned that some of our neighbors gave pretzels on New Year’s to wish good luck and fortune to their recipients. It was something I would always think back on and I wanted to be able to keep that memory with me in a tangible way, so I learned to make pretzels by tasting, observing and questioning. With a few tweaks, I finally became satisfied with this recipe and brought it home. All these years later, I’m still so glad I did.

You see, returning to the States is a culture shock- to even the most die-hard Yank. Most of the service members we know say the same thing, “The pace of life in Europe is much slower, friendlier and more family-oriented than in the States.” Sure enough, the food is not as lovingly prepared, the people are more harried, life in general is different. It took some getting used to our mother country, to say the least, but we did. We still, however, miss Europe greatly, and there are so many traditions that we picked up in Germany that we still hold on to. Celebrating Oktoberfest like we did in Munich gets difficult, but we try. The pretzels that I fell in love with so many years ago are always quick to be made when I’m missing my Twinks birthplace. I still hate beer though, but Hector compensates for that.

Now, these pretzels aren’t exactly what you will find in Munich or other parts of Bavaria, because I omit the lye bath that those classics receive. Traditionally, pretzels, and their kin, are dipped in diluted lye (or sodium hydroxide); this gives them their recognizable bronze appearance and taste. I, however, am not a fan of having to handle my ingredients with rubber gloves whilst donning eye protection, so I just boil my pretzels in a honey and baking soda-laced bath. The end result isn’t as brown, but are just as tasty. Pretzels have an odd twist, literally, that may take some getting used to on your first few attempts.

Take a disc of dough and roll it between the palms of your hands and the countertop gently pressing and spreading outwards to create a long log about 20″ in length. 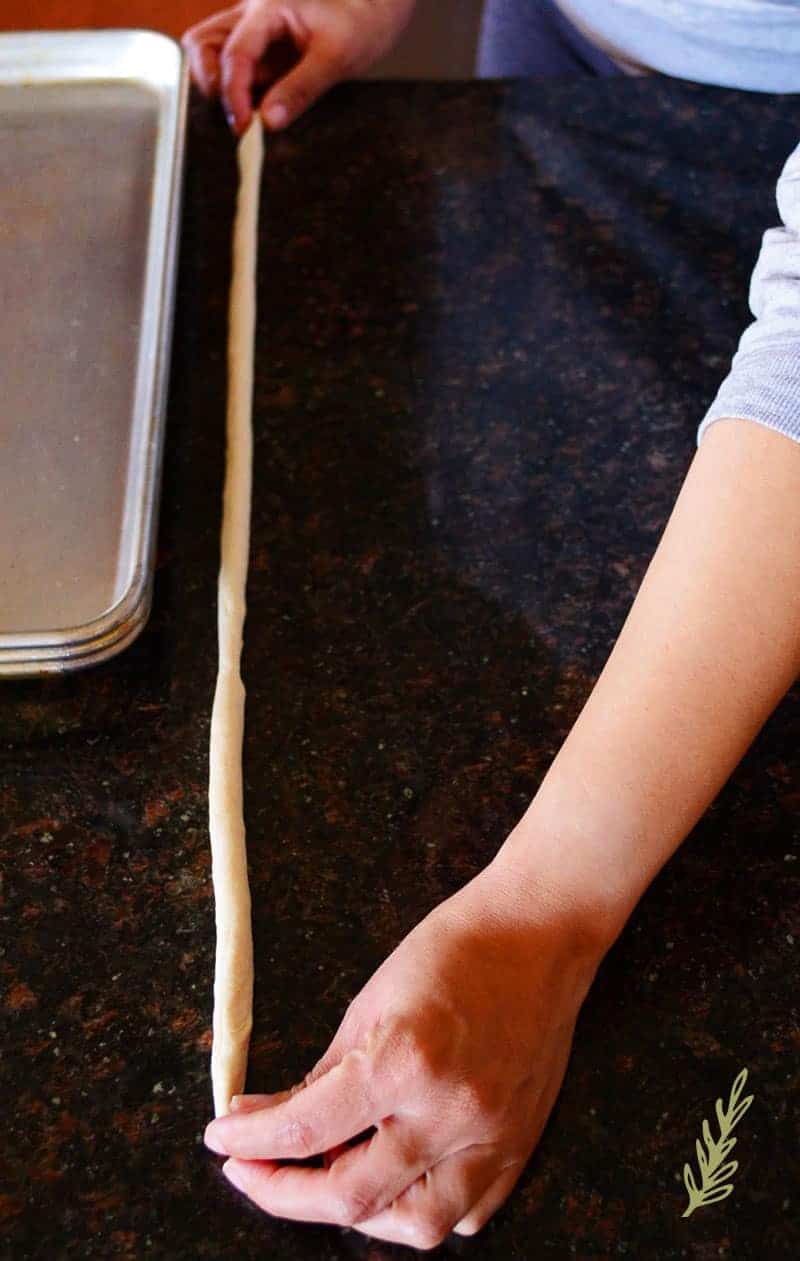 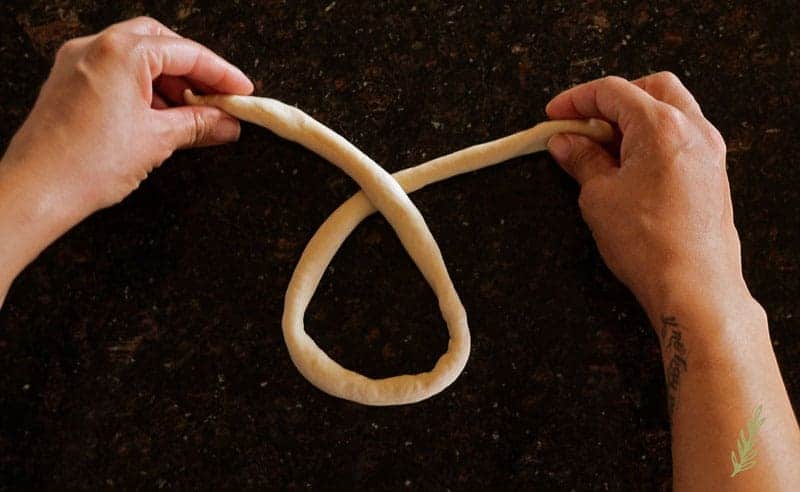 Take your rope of dough and bring up the opposite ends into a “U-shape”. Bring the right end over the left 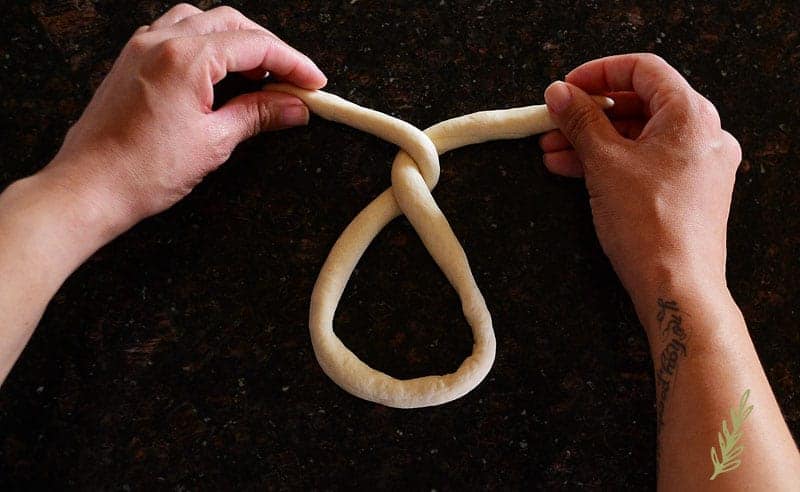 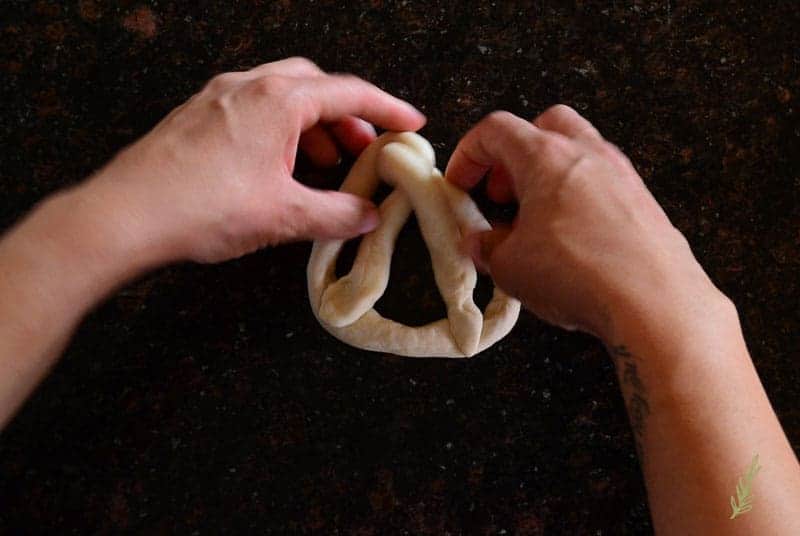 Holding onto both ends, bring the ends down towards the center and split to just off-center to the left and right bottom halves of the pretzel. 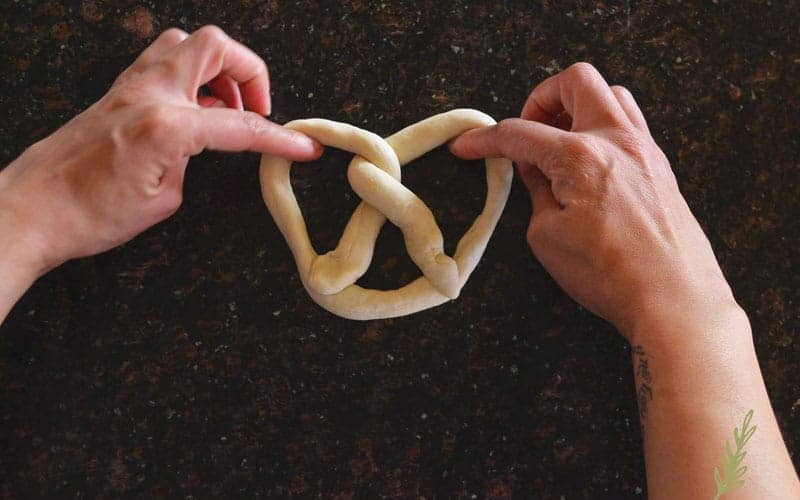 Pinch the ends to the bottom half to seal and shape as needed.

If it becomes overly frustrating to you, skip it and just make straight pretzel sticks. These pretzels are best enjoyed the day they are made, but I have had success with freezing freshly baked pretzels and warming them after they’ve been thawed.

In Germany, I loved the variety of brezels that I would find in the weekly farmers market in our nearby village. Pretzels were topped with asiago cheese, salami, cinnamon and sugar, or a whole gamut of other flavors; the baker was a clever, clever man. Pizza pretzels: topped with a slathering of pizza sauce, sprinkled with asiago and topped with salami (or pepperoni as we know it) are a favorite with the Twinksters in our house. 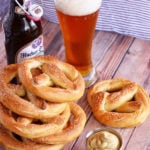 These pretzels are a labor of love in that they are slightly time consuming. However, the simplicity of the ingredients and the mouthwatering taste should make it worth your while.

What food transports you to another place? Share with me in the comments! 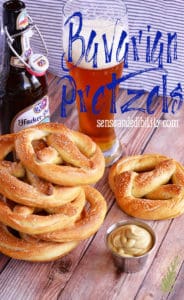