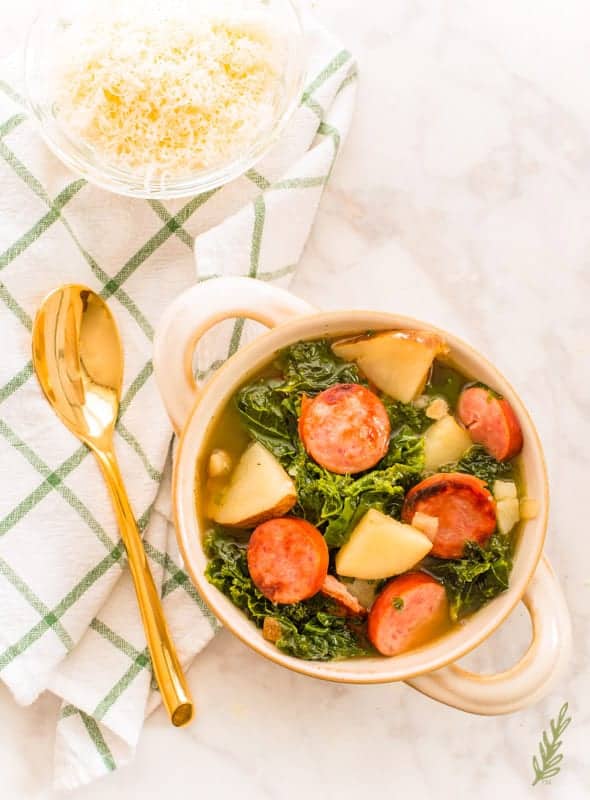 I don’t pretend to be an expert on Tuscan cuisine. Truly, the only requirement for labeled “Tuscan”, in my opinion, is that it needs to be rustic, comforting, and filling. Thus, this Sausage & Potato Stew with Kale is nicknamed my Tuscan Sausage & Potato stew. 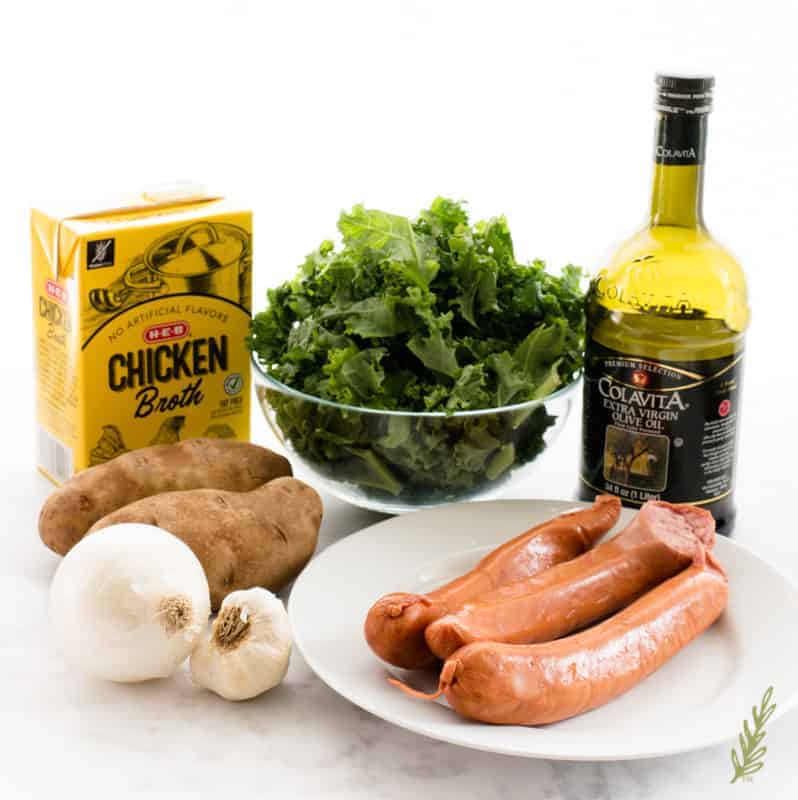 The best part about this stew- second only to its amazing flavor- is how easy it is to prepare. I added an extra step, and dish, just because; but, you can most certainly make this a true one-pot meal. All you need are: sausage, onion, garlic, potatoes, kale, chicken stock, bacon, a smidge of olive oil, salt, pepper, and sage. Isn’t that amazing? Eleven ingredients and one pot. Obviously, this is a great weekday dish. If you are out and about during the weekdays, throw this into your slow cooker on the way out of the door, and you’re good to go. I live to bring you meals like this, my friend. I really do.

Use Your Favorite Sausage 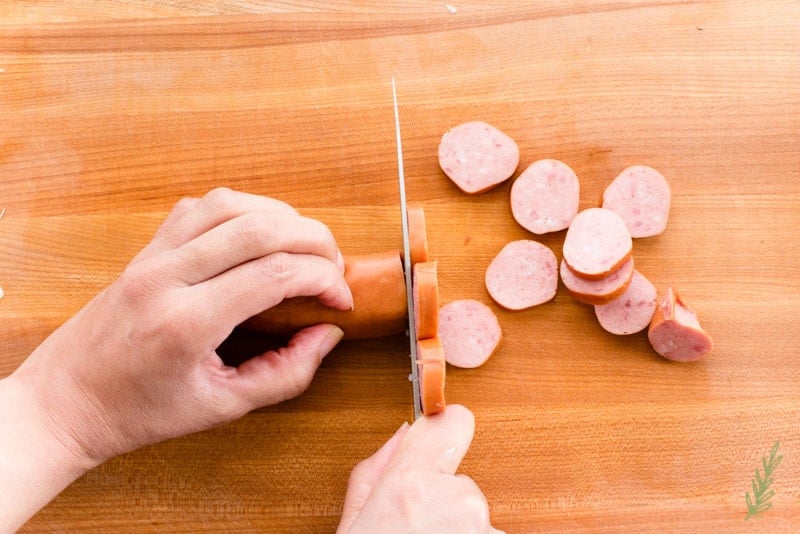 Polksa kielbasa (Polish sausage) is a staple in our kitchen. It’s easy for the Soldier and the twinks to make dinner with it when I’m too busy to cook, so I make sure we always have some on hand. Even if you don’t eat pork, this is still a dish you can prepare. Instead of pork sausage, use beef or turkey sausage. You can even use that fancy flavored sausage, if you have that on hand- provided it doesn’t have bold, conflicting flavors (like sun-dried tomatoes or jalapeños).

To prep the sausage for the stew, grab your chef’s knife and a cutting board. Slice the sausage into half-inch thick slices. 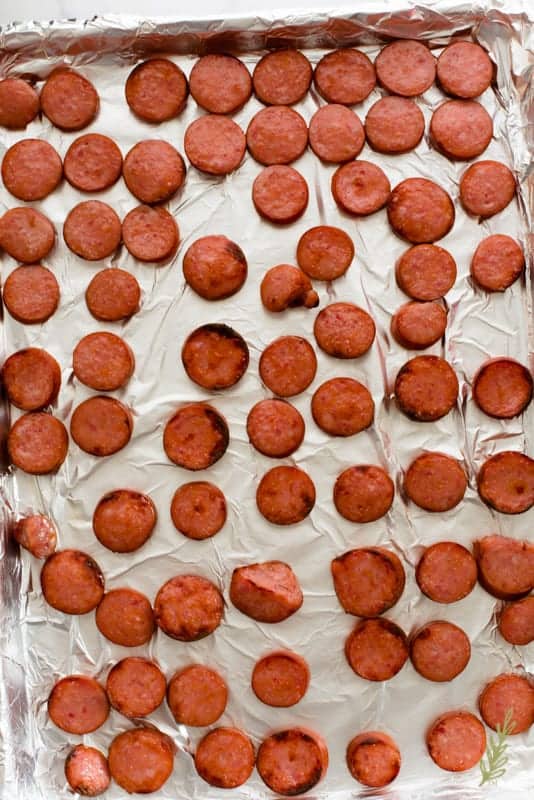 For me, flavor is develop with the caramelization (browning of sugars) of any given food. To extract as much flavor as possible from the sausage, I use one more dish in preparing this recipe. It’s not even a legit dish because I cover my sheet pan with aluminum foil, so that’s, like, half a dish. Arrange the sausage on the sheet pan and broil, on low, for three minutes on both sides, or until the sausage is slightly charred on the edges. That char will impart more flavor to finished stew. 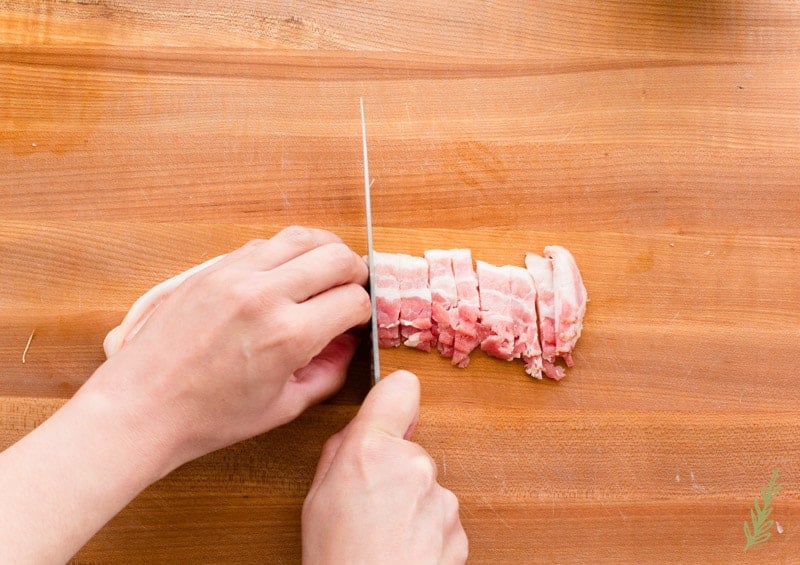 Before you switch cutting boards, or clean the one you’ve cut the sausage on, slice the bacon into strips a quarter of an inch wide. Now, switch to your veggie cutting board, or clean this one off. 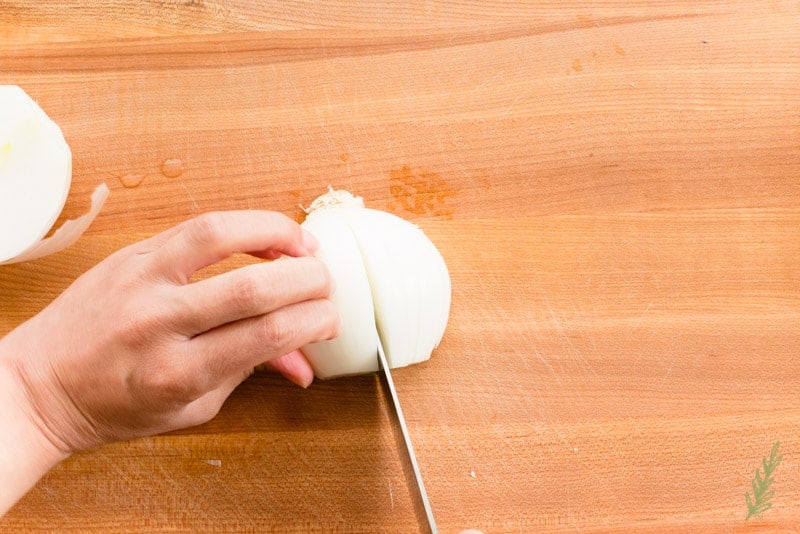 Slice off the stem end of a medium white onion. Cut the onion in half, through the root, then peel it. Using the onion’s natural lines a guide, slice the onion half (without going through the root) a quarter of an inch thick. 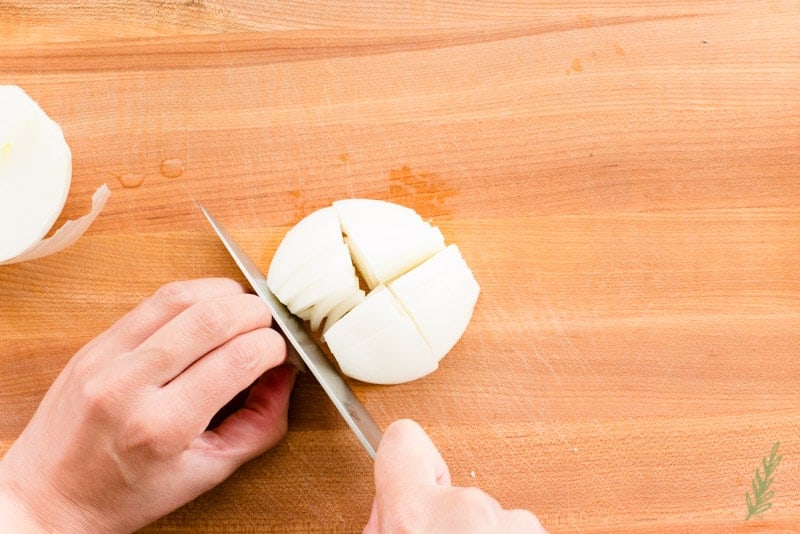 Turn the onion ninety degrees and cut it in half before removing the root end. Use your fingers to separate the slices. 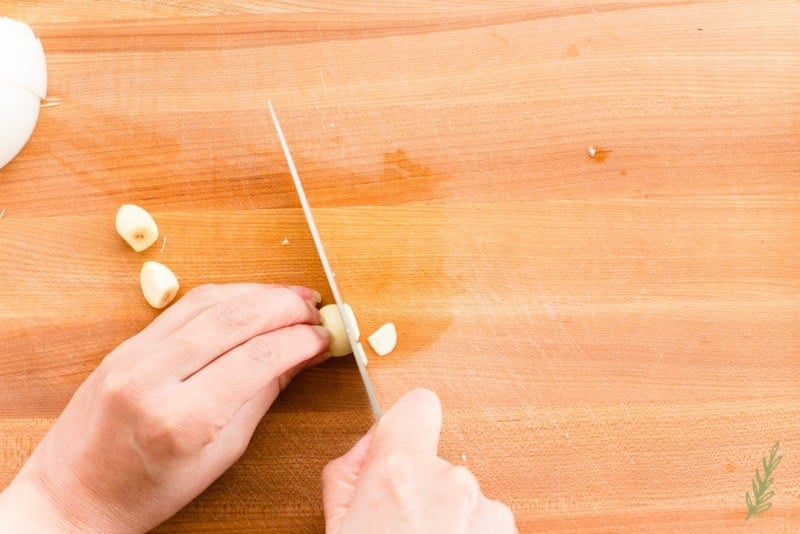 Peel and slice three large cloves of garlic. Push these, and the onion slices, to the side. 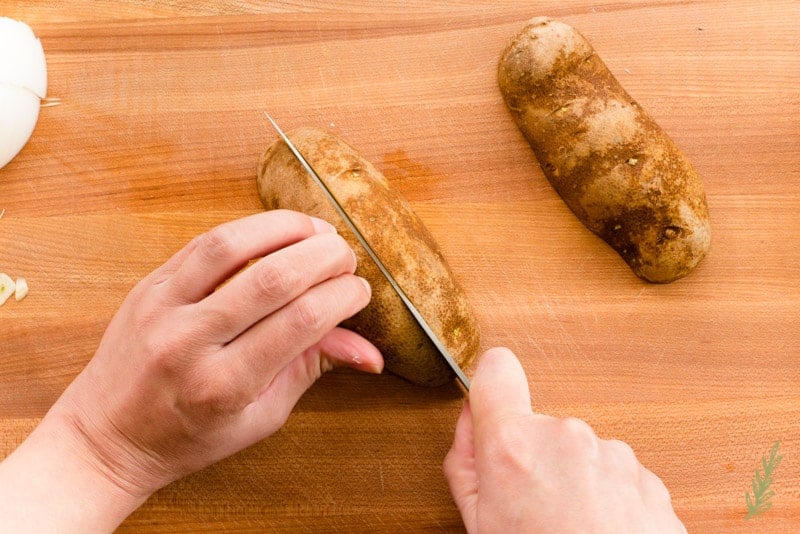 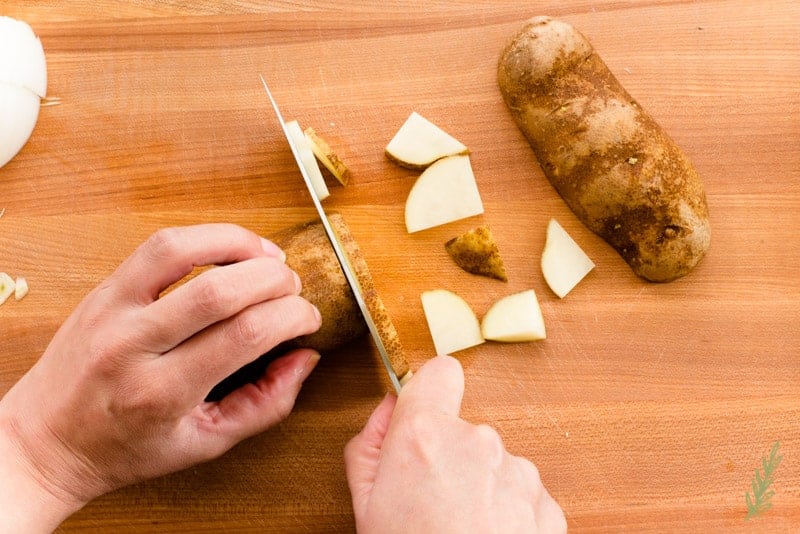 Turn the potato quarters, then slice the potatoes into half-inch thick quarter rounds. If you plan to prep all of these ingredients ahead of time, store the potatoes, covered in cold water, in a bowl. When you’re ready to make the stew, drain the water off of the potatoes before adding them to the pot. 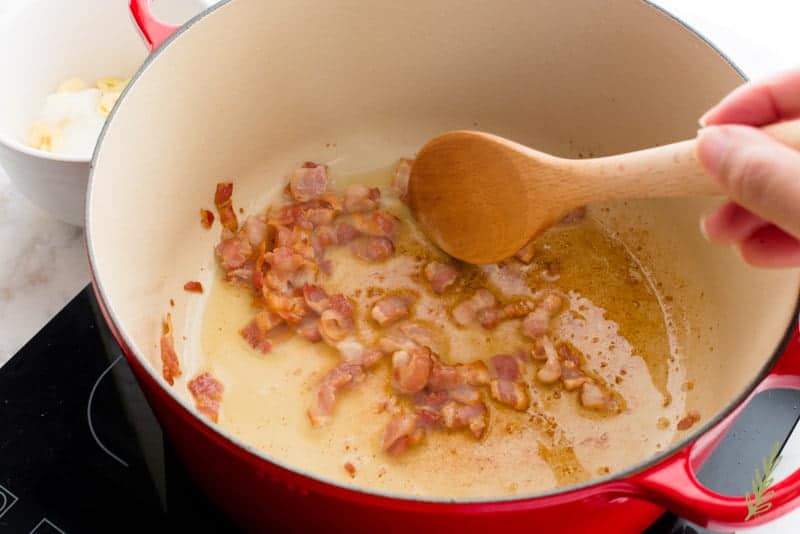 To prepare the stew, heat the olive oil and bacon slices in a six-quart dutch oven over medium heat. Use a wooden spoon to break up the bacon pieces and cook to allow the bacon to slowly release its fat. 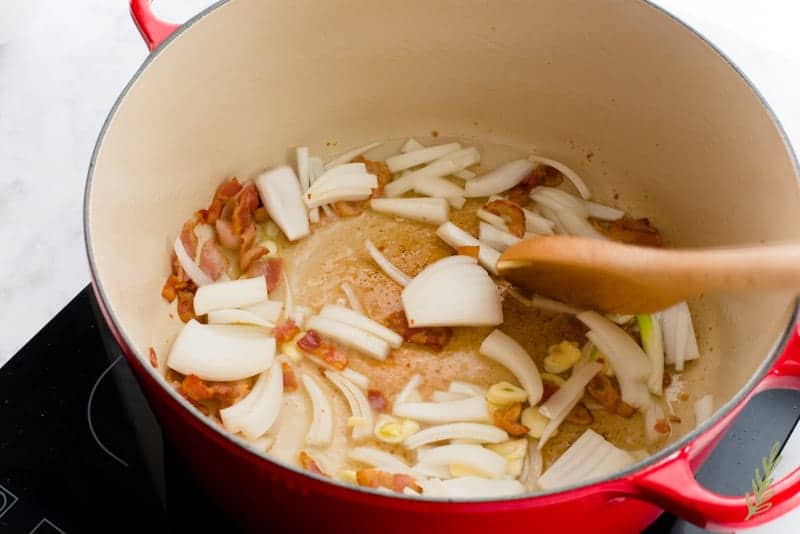 Add the onions and garlic to the pot and cook the veggies until they appear glossy and begin to look translucent, this should take three to four minutes. 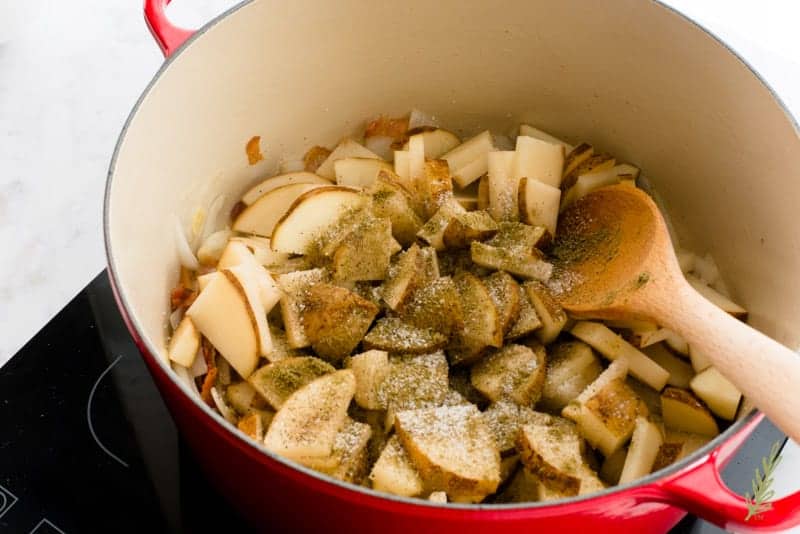 Stir in the potatoes and seasonings. 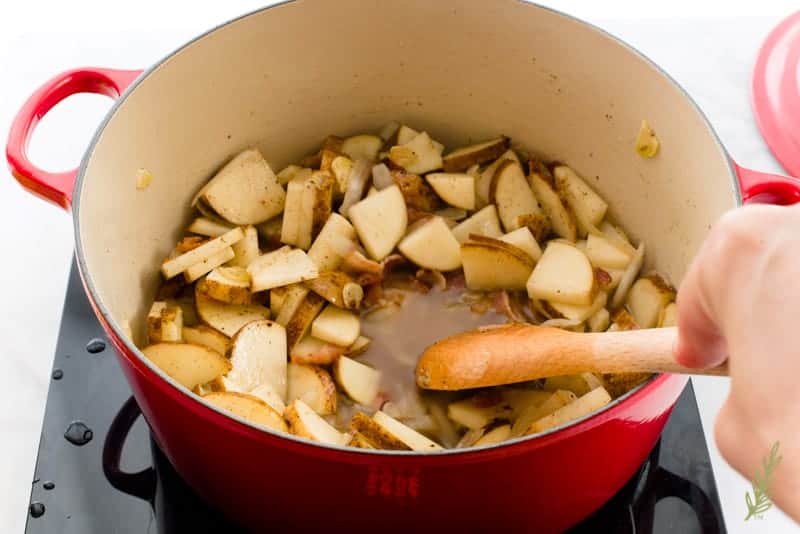 Now, pour in the chicken stock, using your wooden spoon to scrape any browned bits from the bottom of the pot (FLAVOR!). Bring the stew to a boil, reduce the heat to low, and allow the stew to simmer, covered, for fifteen minutes. 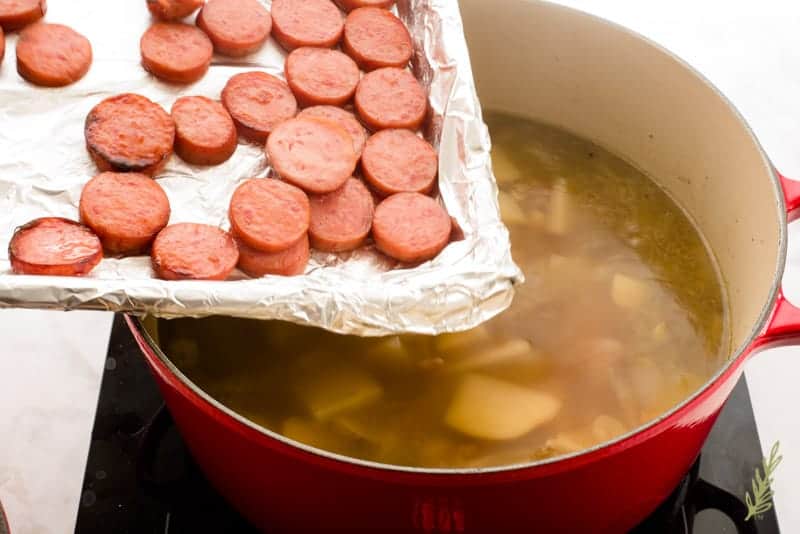 After fifteen minutes, add the sausage… 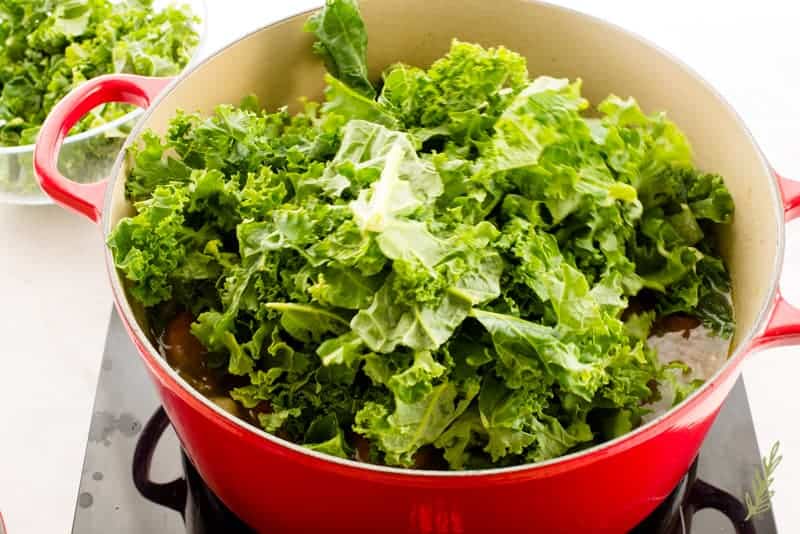 …and the kale to the stew. Return the lid to the pot and let the stew cook for another ten minutes. 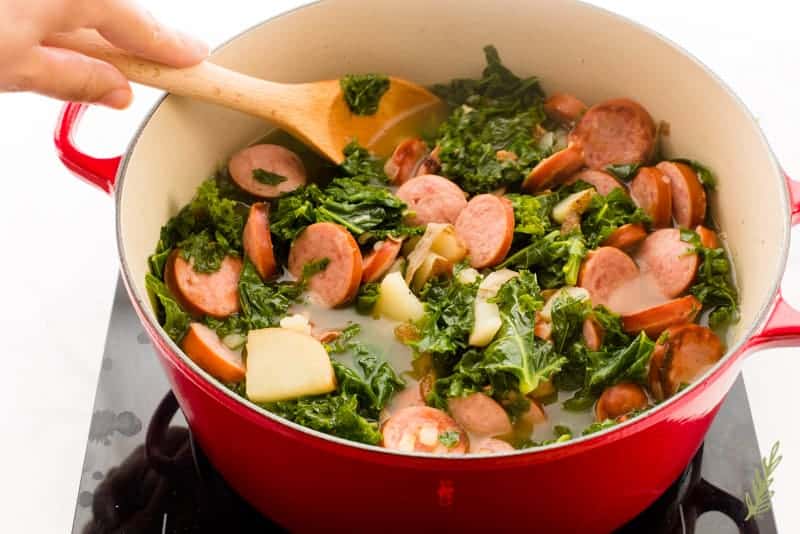 Once the stew has simmered and the kale has wilted, you’re ready to serve the stew.

I love topping my bowl of stew with a big ol’ pinch of asiago or parmesan cheese. A crusty loaf of bread would be totally Tuscan, too. 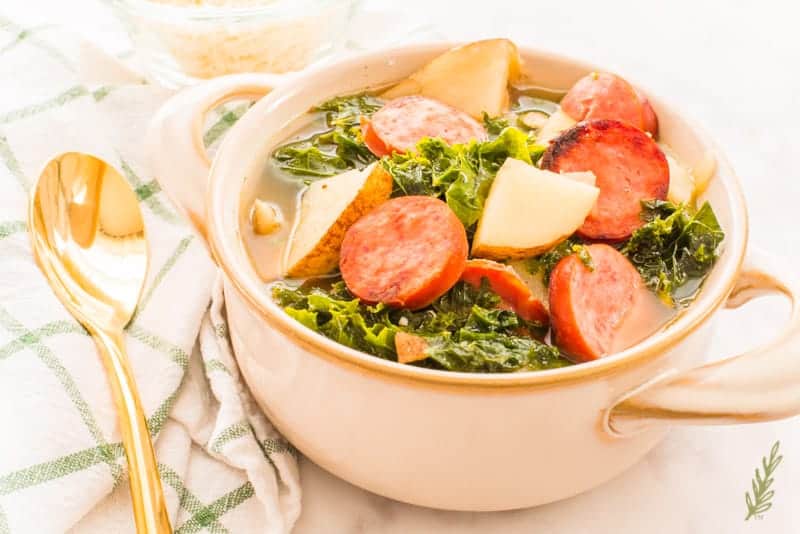 The slow cooker version of this recipe is so easy it needs less than one paragraph. Add all of the ingredients, except for the kale, to the slow cooker. Stir, cover, then cook on low for eight hours. Ten minutes before serving, add the kale and allow it to wilt.

Pin and share this recipe for those busy work days. 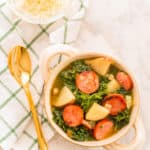 Slow Cooker Method: Add all of the ingredients, except for the kale, to the slow cooker. Stir, then cover and cook on low for 8 hours. Ten minutes prior to serving, add the kale and allow it to wilt. Store leftovers in the refrigerator in an air-tight container for 3 days. Freeze any remaining leftovers for 6 months in a freezer storage bag. Thaw for 24 hours under refrigeration before reheating in the microwave or on the stovetop.
Tried this recipe?Mention @senseandedibility or tag #senseandedibility! 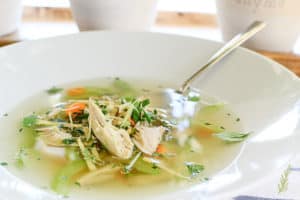 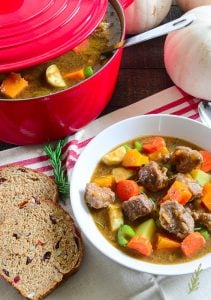 This sausage, potato and kale soup looks so warm and comforting. Perfect powerhouse soup for the cold winter. Can’t wait to try it!

I think you’re really going to love it, Sharon!

This looks really savory. I would love to try to make this sometime. It would be filling too.

For the amount of work that goes into it, it IS surprisingly filling, Rachel. You’ll love it.

I made a similar recipe last weekend that used ground sausage instead of sliced and it was fab. It would be fun to try your version to get the different texture of the sausage. It looks delish!

The version you made reminds me of my Butternut Squash, Sausage, Kale, and Farro Stew I made a while back. Sounds great!

My daughters are huge fans of kale! I’ll have to make this for them soon.

For sure, Heather! I know my kiddos scarfed it down.

I love kale in soup but always forget to use it when I cook it. Thanks for the reminder!

OMG!! The same thing happens to me sometimes, Catherine!

This looks like a perfect way to eat kale! My husband doesn’t like it, but I think in a soup like this with sausage he would. Thanks for the recipe!

For sure, anything to “water down” the taste of kale, Julie, LOL!

This sounds so amazing! I’ll have to try it!

I hope you love it, Rachel!

This looks really good! I can’t wait to try this recipe. 🙂

I love a good soup. The weather in NC has been bi-polar lol so soup weather is every other day. I will sure try this recipe

I think NC and TX are long-lost sisters because the weather here has been stupid too!

This is perfect for all this dreary weather we’re having!

It’s is! The weather here has been SO funky, Amanda!