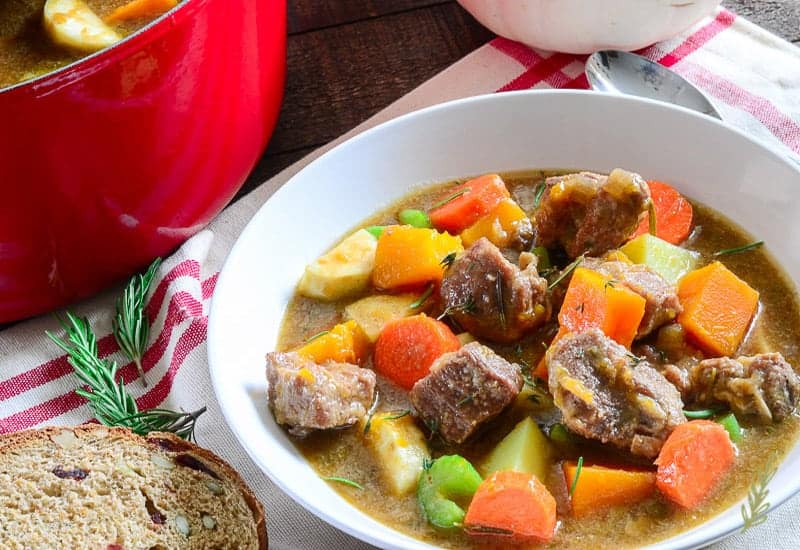 Okay…let’s cut to the chase. Our renovation of the dining room still isn’t finished. A chef and a Soldier decide to put up wainscoting in their home and they can’t get it done in a week. No surprise there, I’m sure. This week was all about convenience meals. Among them, this Harvest Pork Stew was my saving grace. There were a few times Hector looked like he wanted to be back downrange. Things were touch and go for a while, my friend. Hopefully, by next week, I’ll have something to show for the bad attitudes and paint-filled hair.

In the meantime, let’s get this comforting stew in your belly. 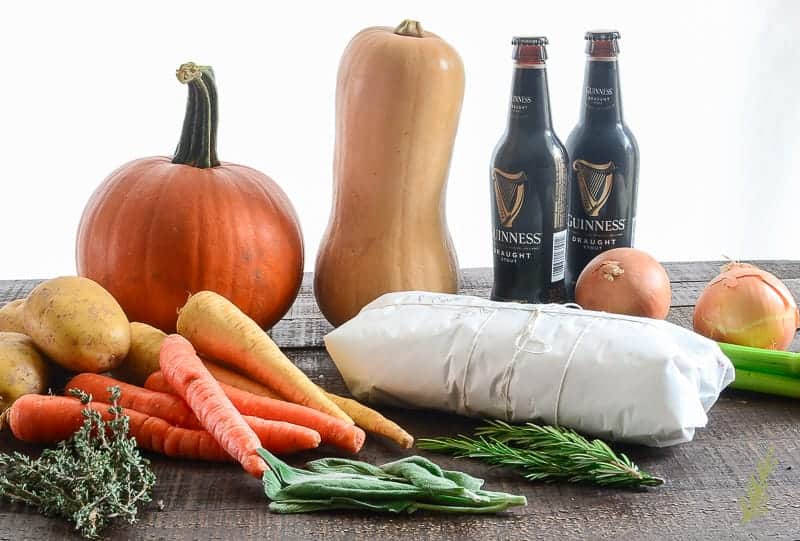 Originally, I was going to call this an Irish Harvest Stew. However, when I saw that lamb chunks were 9-bucks a pop, that quickly changed to Harvest Pork Stew. Listen, I’m a huge fan of using quality ingredients, but I’m a pragmatic woman. There are plenty of pigs in Ireland just like there are lambs, so it could still, technically, be considered an Irish Harvest Stew. Shoot! If it saves me $6 a pound, I’ll turn it into a South Bronx Harvest Stew! I’m a person who likes saving money.

So, a “Harvest Pork Stew” it became, but I stayed true to my original recipe by adding Guinness Irish Stout. Erin Go Bragh, indeed.

My love for Ireland began when I traveled there to fulfill a graduation requirement for culinary school. Virginia, in County Cavan, was where our sister school was; so a group of ten classmates and I traveled there to learn the intricacies of the famed Irish cuisine. No, the irony was not lost on any of us. We all knew that Ireland was as known for its food as New York City was known for its hospitality. But, when your degree is riding on it, you pack up your passport and say, “Ireland, here I come!”

We learned how to make potatoes…and pork…and more potatoes. Not haute cuisine, by any stretch of the imagination. The reality, at least for me, was that I went to see Ireland- I just had to cook a little bit to do it. The highlight of the trip was going to the Guinness Storehouse in Dublin. Guinness tastes different when it’s poured in a pub in Ireland- no lie. The worst part of the trip was having people walk up to me and ask to touch my hair because it was, “So coily!” I have to tell you, weirdos aside, Ireland was an amazing trip for me.

With this stew, I wanted to incorporate the tastes of fall, but also tie in some of my Irish memories. Stew is a staple in our home during the Fall and Winter months, so I tend to alter it based on the weather and what’s in season. Obviously, pumpkin and squashes are getting lots of love this time of year. Instead of choosing a bland pumpkin variety, I opted for the sweeter pie pumpkin. I knew using this type of pumpkin would add another dimension of flavor to my finished stew and that made me giddy with excitement (since I’m a dweeb).

Carrots, celery, onions, garlic, potatoes, and parsnips are the other stars of the pot. The main character, though, is my boneless country rib pork. Cut from the sirloin of the pig, these ribs are all meat- all the time. I prefer buying pork for stews this way because it’s economical and gives me control over how large or small I want my cuts. With this stew, I’m going middle-of-the-road, size-wise, by cutting the pork into 1 1/2″ chunks. Fresh herbs that will complement the pork, and stout are all that’s left to add. 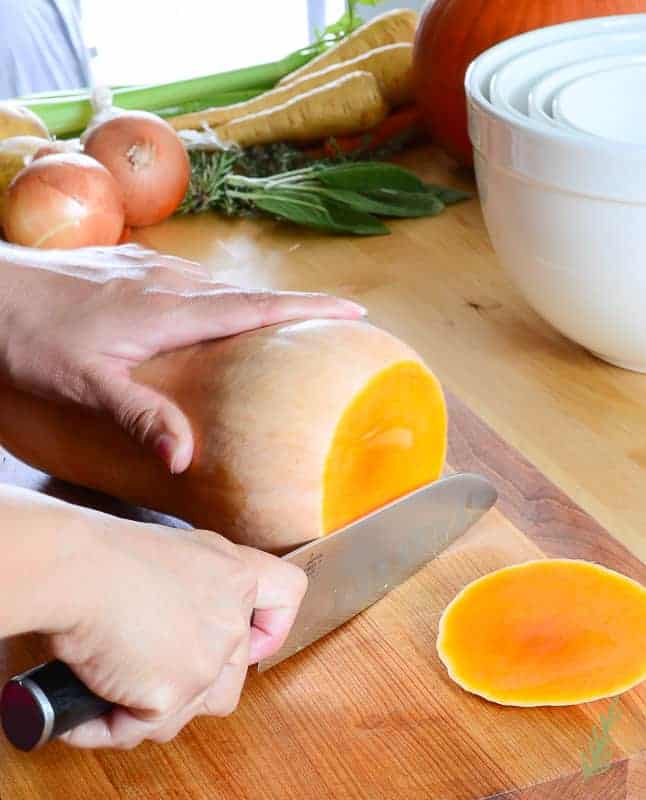 The first thing I need to tackle (because it takes the longest) is cutting up the squash and pumpkin. Both are broken down in the same way, with the use of slightly different kitchen tools. The first step is creating a stable base with which to peel the gourds. I do that by lopping off the top and bottom of each. This creates a nice, flat surface that will prevent your veg from rolling around on you and you slicing off a digit, or two.

Anytime you’re cutting, you want to make sure you have an extremely sharp knife. I know some may be freaked out at the thought of a crazy-sharp knife, but the truth is you do more damage and harm to yourself with a dull knife than you ever would with a sharp one. Dull knives force you to press harder and saw at your food, this (almost always) leads to finger cuts, or worse. Invest in a good set of knives and take care of them by never washing them in the dishwasher (standing water on a blade is a curse from the pits of hell), always drying them immediately after washing, and honing with a steel frequently. 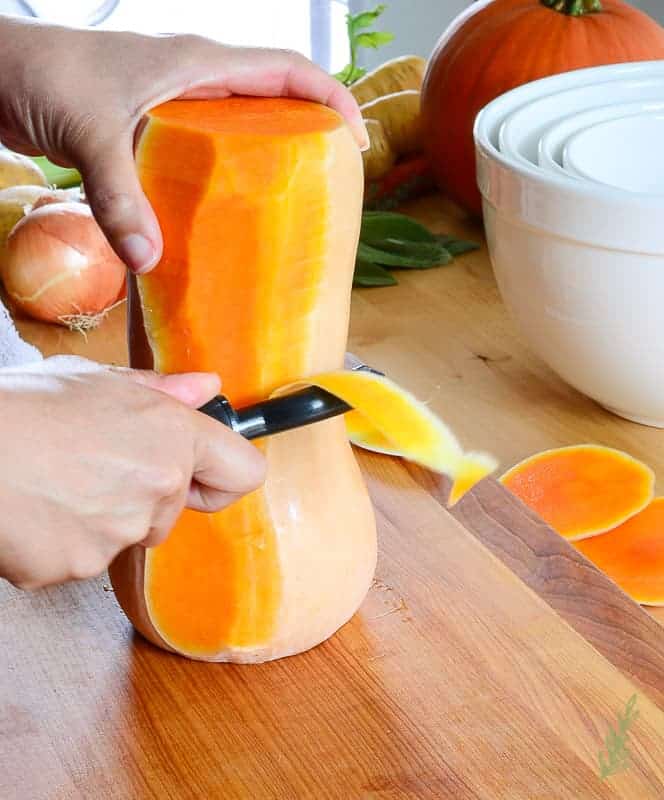 Once you’ve given yourself that firm footing, remove the tough, waxy peel with a strong vegetable peeler. I love my peeler because it’s a swivel peeler- meaning it can peel in both directions. This makes peeling things like carrots or potatoes a breeze because you can run the peeler back and forth to peel, instead of in one direction. The skin of a butternut squash is notoriously tough, so you need to have a peeler that can handle it. If not, just use your sharp knife and be sure to hone the blade frequently while peeling. 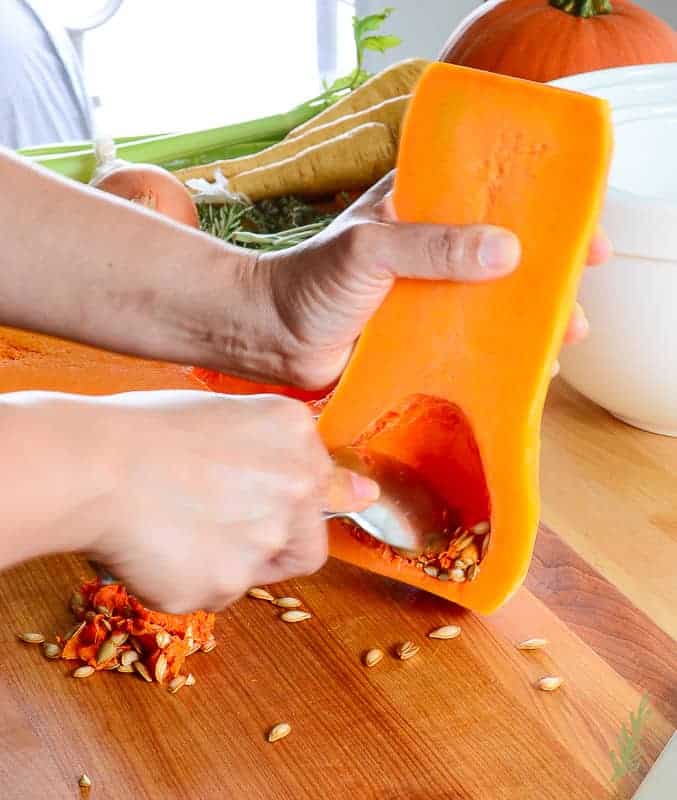 Next, cut the squash (or pumpkin) in half lengthwise and scoop out the stringy, seedy pulp with a spoon. You can either discard them or give them a quick rinse and roast for a snack. 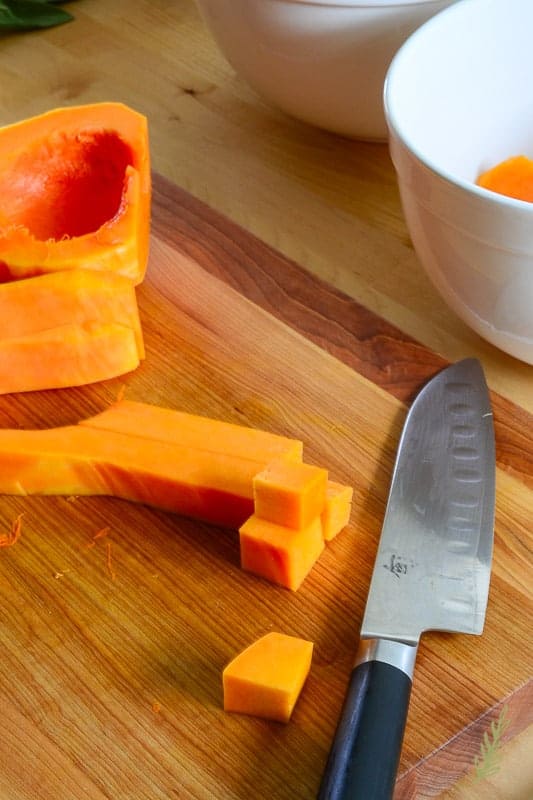 Slice your squash in 1″ thick strips, then in half down the length of the slice. Finally, dice the squash into 1″ cubes and place in a bowl. 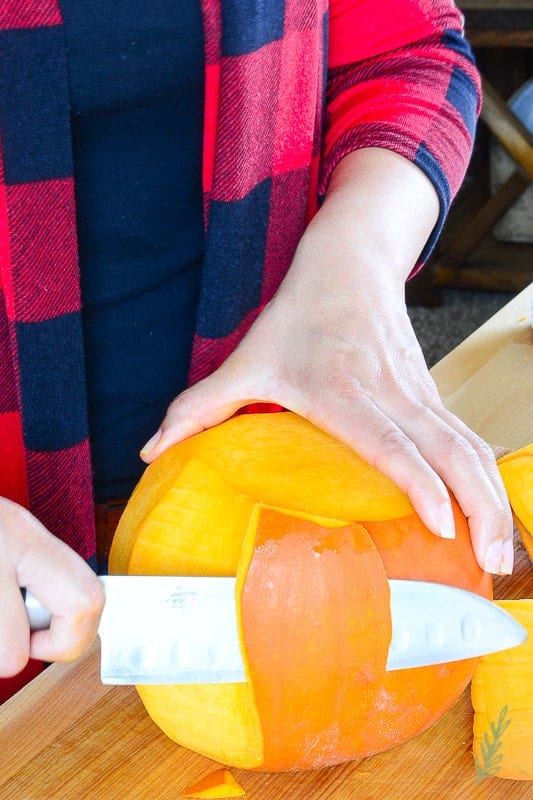 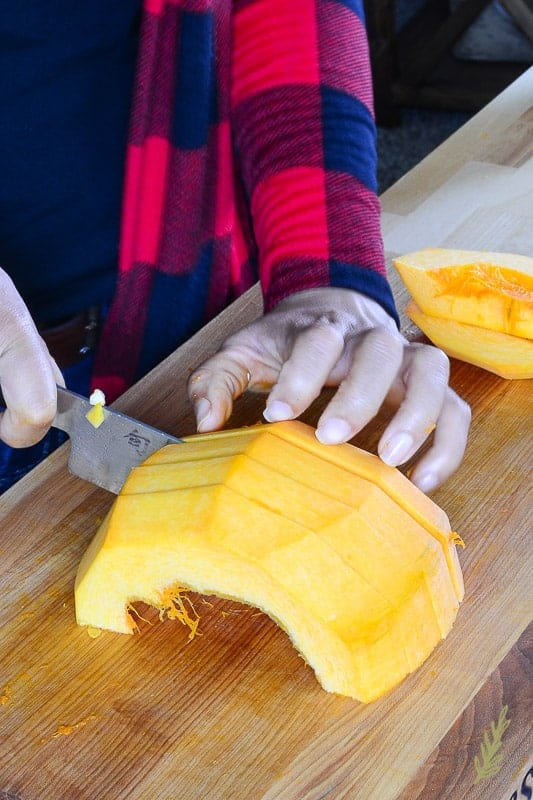 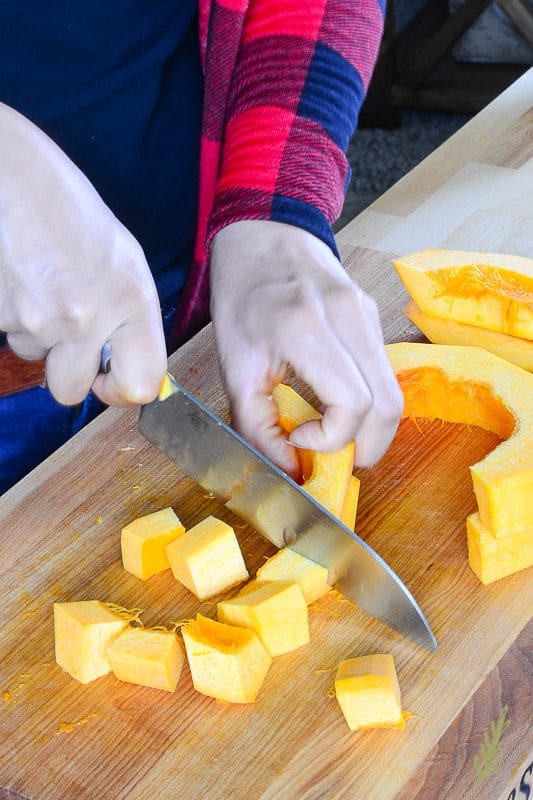 Do the same for the pumpkin. 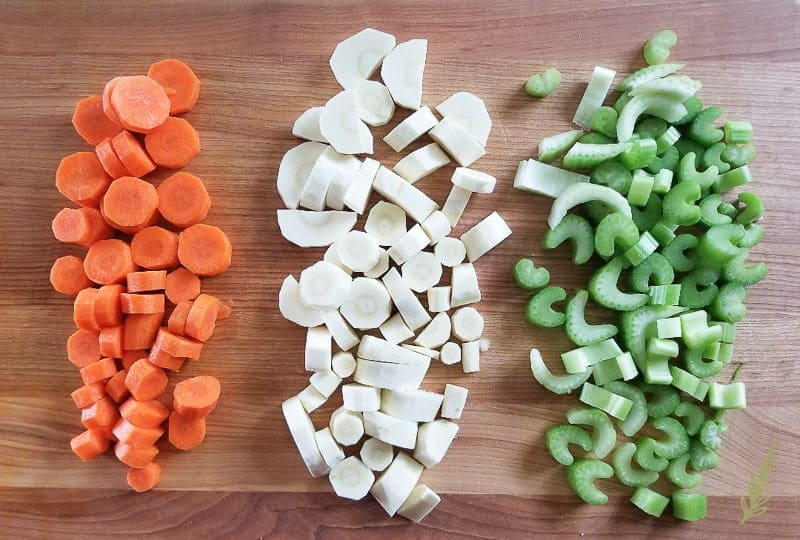 Now since we’re already in a veggie-cutting mood, we might as well take care of the rest of our veg. Peel and slice the garlic, onions, carrots and parsnips; then slice the celery. 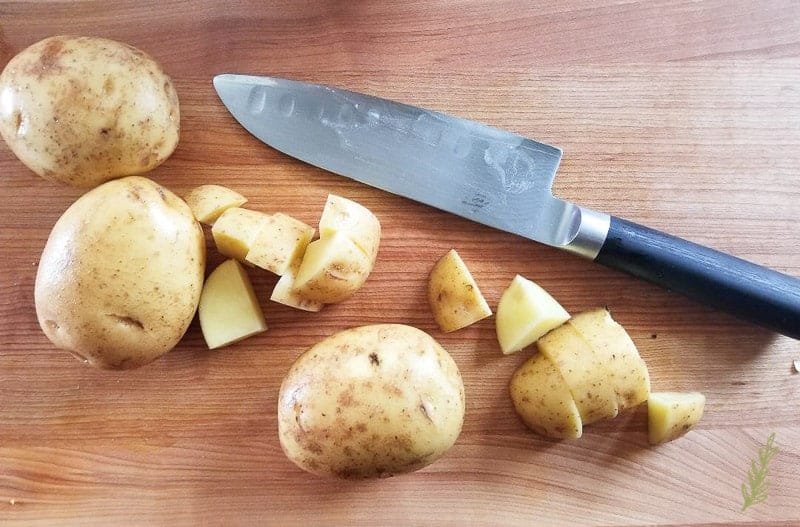 Give the potatoes a good scrub and cut. First slice down the length of the potatoes, turn them onto the flat side and slice in half (lengthwise) again. Finally, dice the quarters into…what? 1/16ths? Aint’s nobody got time for all those fractions. Cut them like I did in the picture, please and thank you. 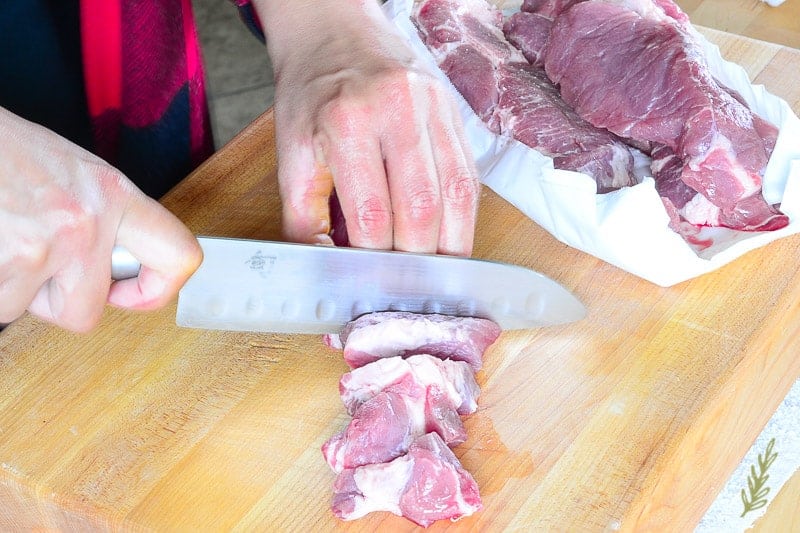 Now that we’re done with the veg prep, we can switch out our boards for one that is safe for raw meat. I have cutting boards for most food items. They’ve been collected over many years, so if you don’t have more than one cutting board, make sure you thoroughly clean any board that is used for both raw and fresh foods. I strongly recommend having at least two cutting boards. Dedicate one to raw meat and the other to everything else. Cut the pork into 1 1/2″ chunks and place into a large mixing bowl. 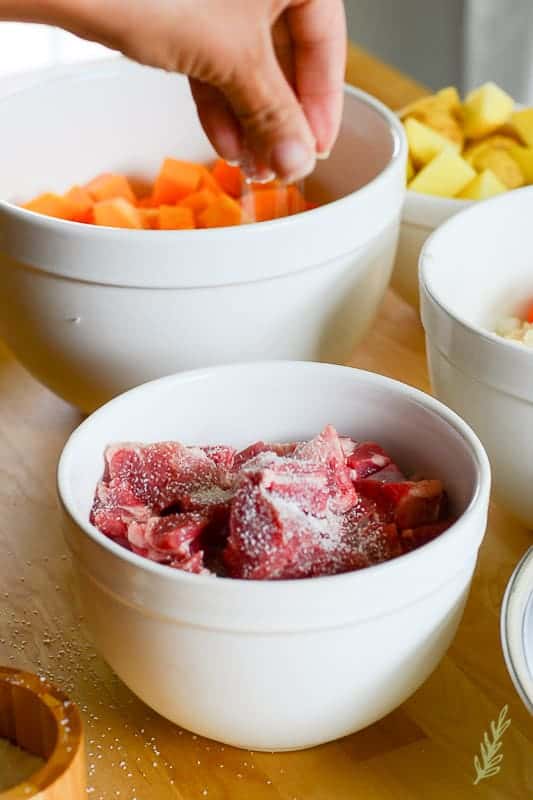 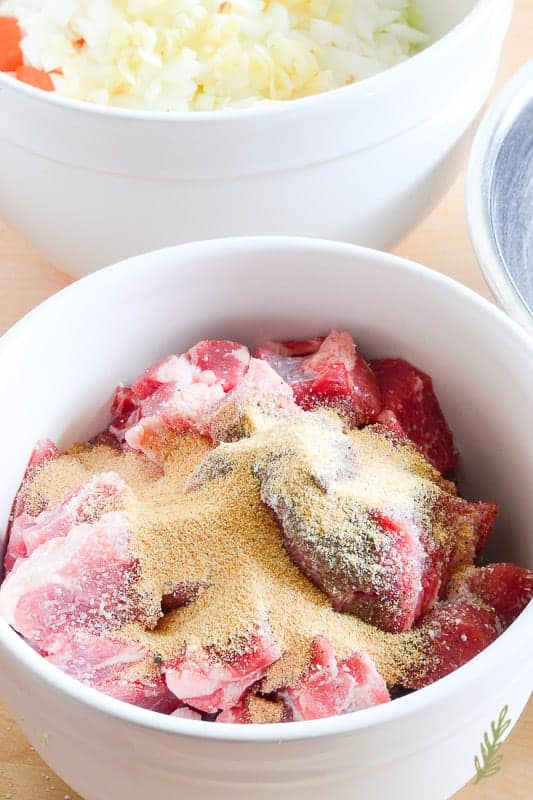 I say, “go heavy,” because this is the only seasoning we’re going to add to the meat. The meat, in turn, needs to season the rest of the stew, so we want to be liberal with the amount of seasoning we add now. 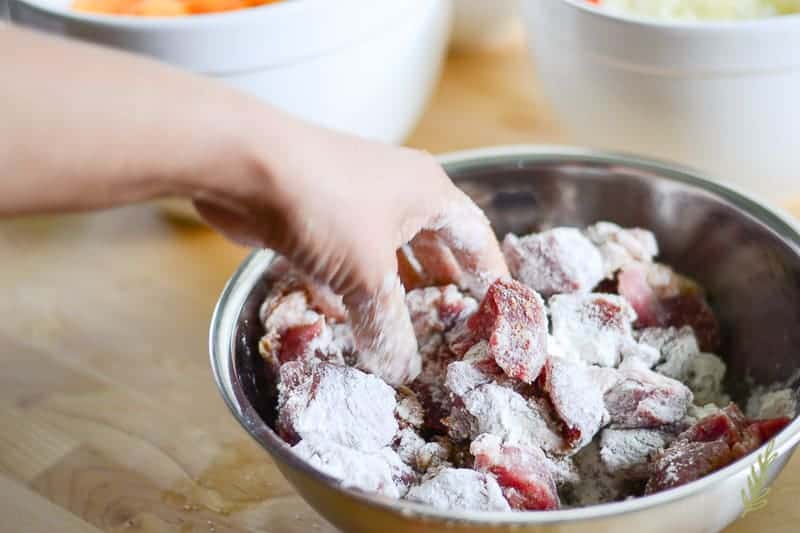 Toss the pork chunks in all purpose flour to coat them lightly. This is how we’re going to thicken the stew and give it body. The flour combined with the fat creates a roux which is a thickener. We kill two birds with one delicious stone. 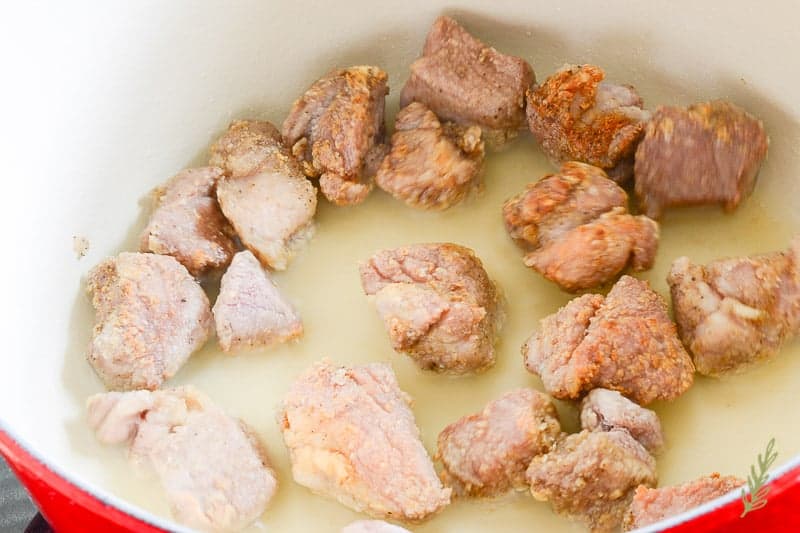 Once the pork is coated, we give it a quick sear in a dutch oven coated in oil. We’re not looking to cook the pork, just to caramelize it and start building on the flavor profile of the finished dish. Once your pork is browned, remove it from the pot and set aside. You need to sear in small batches to achieve that nicely browned crust. 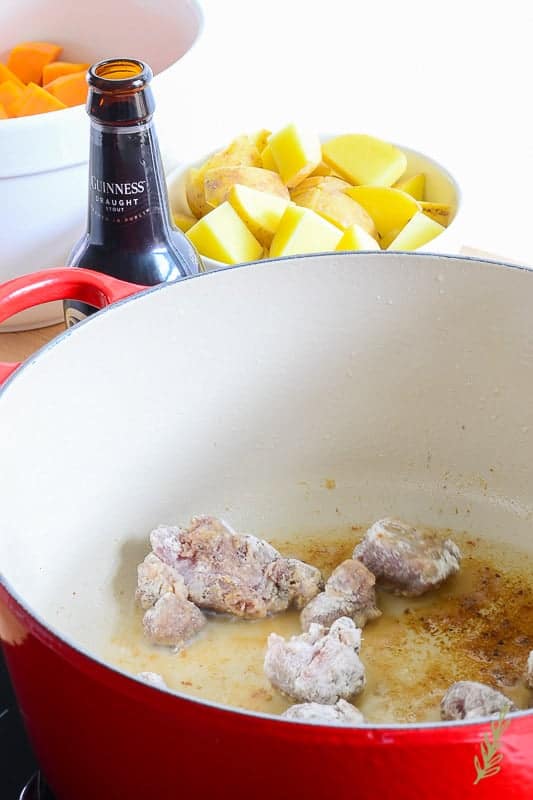 Don’t worry if you start to see seared on bits of pork at the bottom of your pot. That’s actually everything we want! Those little brown bits will get scraped up when we add the beer and will flavor our stew even more. 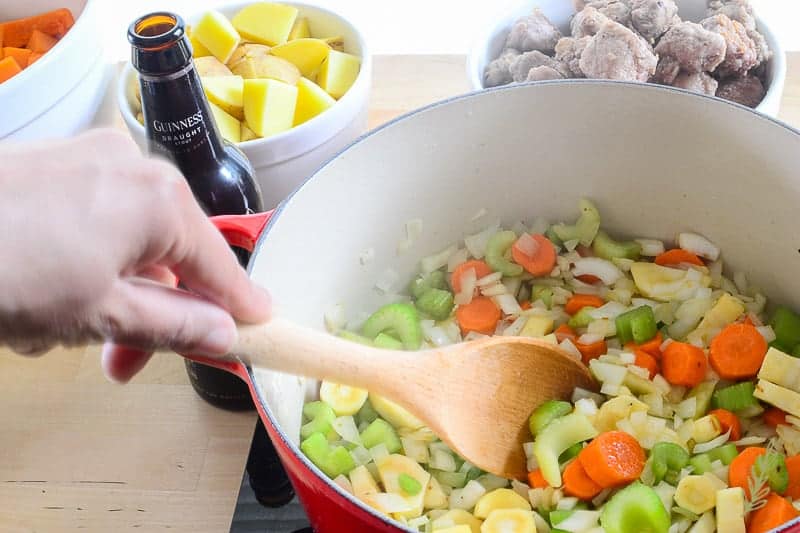 Add the veg, all except the squash and pumpkin, and cook until translucent (about 5 minutes). 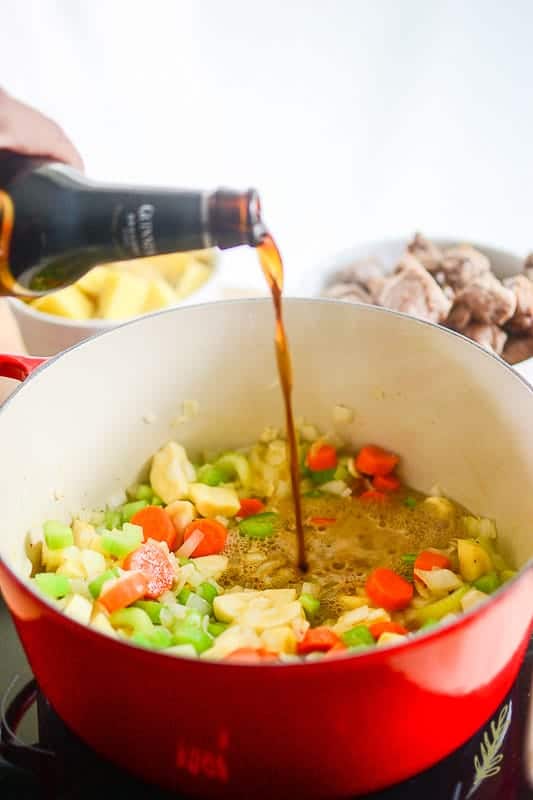 Add the beer, and with a wooden spoon, scrape up those yummy cooked on bits from the bottom of the pan. 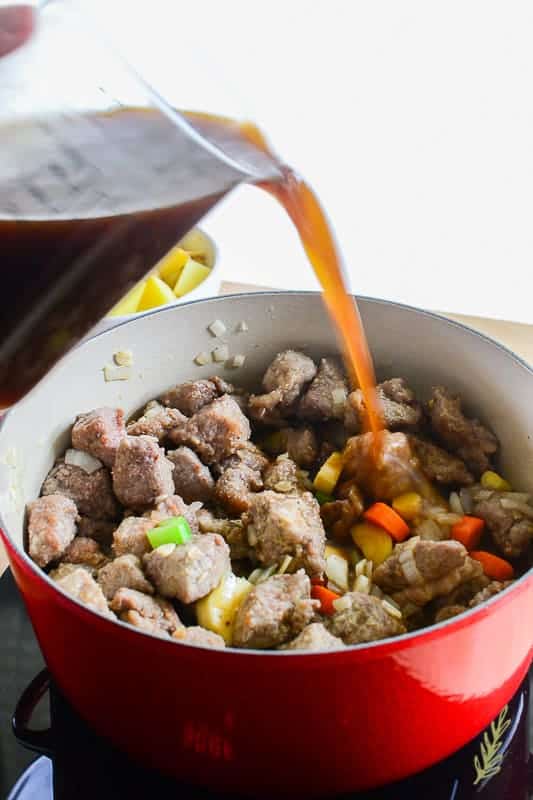 Now we add the beef broth to the pan and give everything a quick stir. Bring the stew up to a boil. 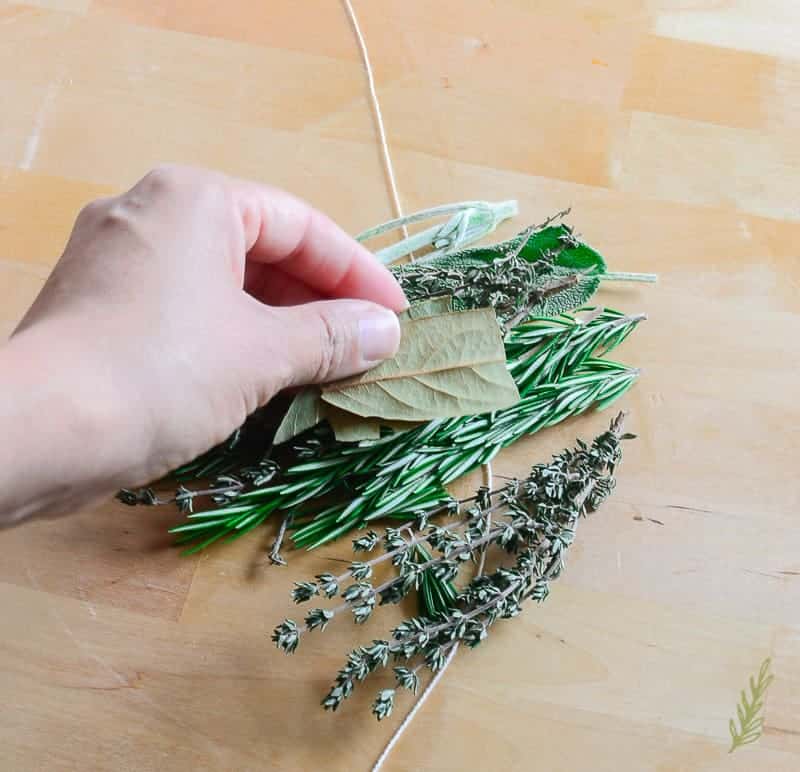 We need to make a bouquet garni while we’re waiting for the stew to come to a boil. Bouquet garni is French for “bundle of herbs tied together so we don’t have a bunch of herb sticks floating around our ‘ish.” Loosely translated, of course. It’s an efficient way to flavor your soups and stews with herbs without having to fish out the stems at the end of cooking. Simply bundle your herbs together; here we’re using rosemary, sage, thyme and bay leaves, and tie them up. 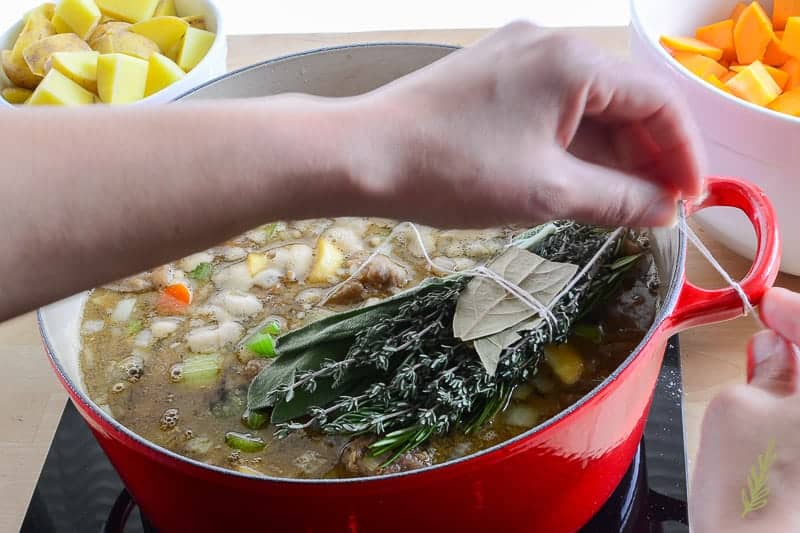 Then tie the loose end of the kitchen twine to the handle of your stockpot to secure it. Push the bouquet into the stew your spoon and allow it to cook with the stew. When the stew has finished cooking, cut the string and pull out the bouquet. Fancy, no? Cook the stew for 20 minutes. 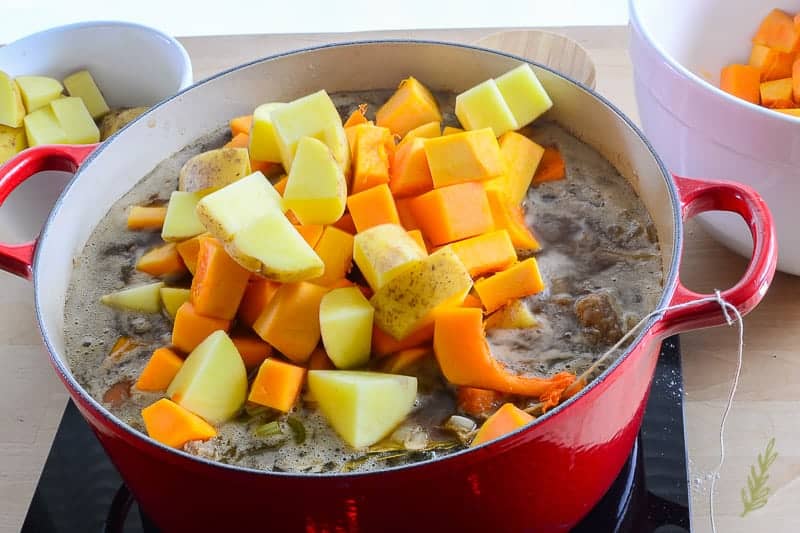 Add the potatoes and the gourds and reduce the heat to low. Allow the stew to simmer for 30 minutes or until the vegetables are soft and tender. 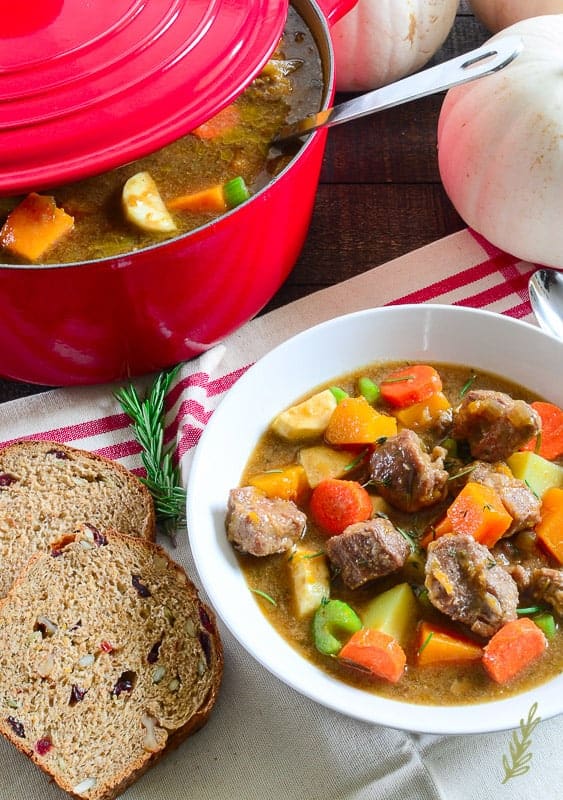 Now all that’s left to do is spoon up a dish and enjoy! Today was the perfect day for this stew. It was so chilly and rainy that it screamed Harvest Pork Stew.

Pin the recipe so you can make it later, and share with your friends and family!

Harvest time has never tasted so good. Use a pie pumpkin for the added depth of flavor.

Try these other filling recipes!