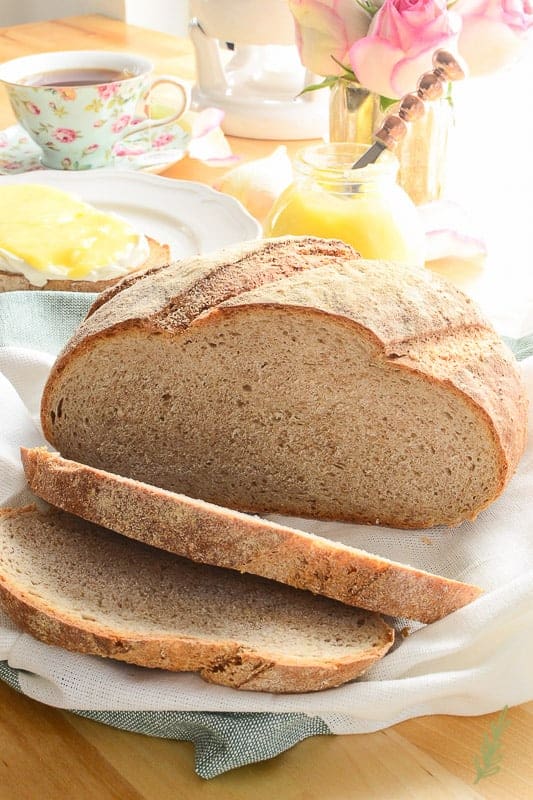 After many minutes of deliberation, I’ve decided: I’m delusional. It took some deep, personal reflection, some crocodile tears and backspins and a few slices of this rye bread to be sure; but, sure, I am. I’m delusional, I’m not ready to be an adult, and I’m giving up on maturity. I was commenting the other day on how I haven’t truly grasped the reality of this deployment. Sure! It’s already been a month (today) that he’s been gone, but it hadn’t fully hit me that he wasn’t coming home every night for dinner until today.

I had to make a trip to the post office the day after a federal holiday to inquire about two packages I had mailed out to him. Said packages haven’t been scanned as departing their post office; so, rationally enough, I decided, “Let me go ask about them.” Shouldn’t be too complicated…or so I was naive enough to think. Now, you may be hip to USPS lingo, but I obviously missed the block of instruction which taught that “Tracking Numbers” can’t, in fact, be used to “Track” items. I mean, they can, if they’re scanned, but unless a package is, you can’t have that package tracked. Crazy, amiright!?!? Guess what’s clearly arbitrary at the post offices between here and Iraq? Scanning. Scanning is totally not in anyone’s job description. It’s wild, but that’s what I found out this morning. The one month anniversary of our deployment. The EMOTIONAL, ragged hair, double-bagged eye sporting, one month anniversary of our deployment. I needed bread. A bread that contained a lot of attitude. My rye bread is what I needed. STAT.

A well-made loaf of bread imitates life. You start out with a jumble of “stuff” that, individually, doesn’t make sense. You take those individuals in the precise amounts, make them mingle and manipulate them in a way that creates enough friction to develop a relationship that’s “tough” (or chewy), yet tender at the same time. Place it in a REALLY hot oven, with just a little slit to make sure it doesn’t explode under the conditions. Add some steam here or there to keep the crust from cracking. You do it all the right way and the next thing you know…you end up with a piece of life (in this case a rye bread-hopefully) that gets slathered in something and shoveled into your pie-hole. When I walked into my house, I was in the, “friction,” phase of life. The post office fric-ed me the heck off.

I sat down with the Twinks to do school and was quickly thrust into the searing, inferno-like oven of life. Maybe they were wrestling with the anniversary or maybe they just needed some rye bread too. Whatever the case was, my pleas of, “Let’s be cooperative today because I’m going to lose my flippin’ mind,” fell on deaf ears and everyone proceeded to show everyone else just how stupid cooperation is. I stared at them while doing that thing that you do when you don’t want to cry. You know, when you open your eyes SUPER-wide so the tears will dry before they have a chance to fall? Yeah, I did that….it still doesn’t work, by the way.

So, the “Mom”, the “Adult”, the “Responsible One”, yeah, her, she cried in front of two eleven-year-old kids who stared at her like the Alien had just Sigourney-Weavered her. Façades crumbled, efforts dashed, strengths depleted. I walked to the kitchen leaving a, “Just do you,” in my wake.

I wanted to stuff my face with bread and I needed to pummel something. Bread-making was the safest way to do that. Bread, like life recently, doesn’t make sense. You mix salt into the same dough as yeast, and something wonderful happens. Yet, if you mix them together, at the same time, the salt will kill the yeast- kind of like the post office kills your dreams of sending a tangible piece of home to your deployed Soldier. I have struggled, and at times failed miserably, with bread making just like I’ve failed with covering up my sorrows. I’ve kneaded the dough too much, and I’ve ended up with hockey pucks (overworked schedules, anyone?!?) I’ve over-proofed (let them rise too long in a humid environment) and ended up with piles of goo- so much like my emotions.

Dramatics aside, in spite of the many years (and as many times as I’ve gone through the process) of bread making I’m still not a master. Some people swear by using their bread machines- I just can’t get down with them. Kneading my dough by hand is the only way I make bread. There’s something personal about spending the time kneading and folding and working the bread dough that, while it enflames my tennis elbow and carpal tunnel, causes me to relax and destress- something desperately needed today.

It’s not only therapeutic, it’s a skill that provides a great grasp of the “intimacy” of dough and bread making, and who couldn’t use a bit of intimacy? You can’t “feel” the consistency of the dough in a mixer or bread machine. You can’t fully examine the amount of gluten or “window pane stretch” the dough has developed unless you really get in there. Truthfully, I needed this rye bread to soothe me, and a mixer or bread machine wasn’t going to cut it. 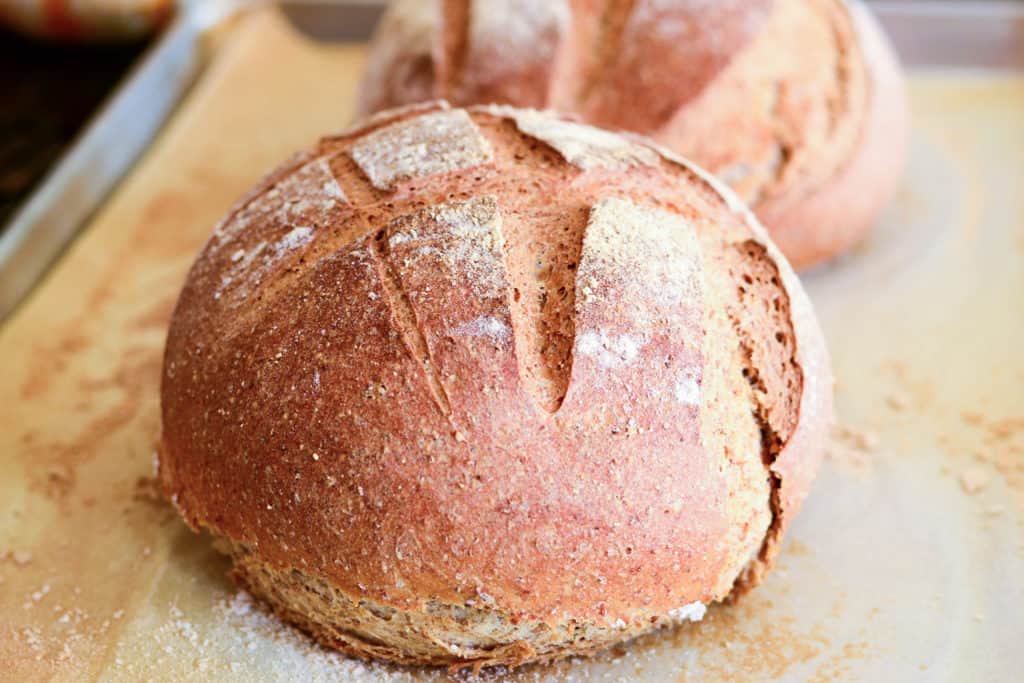 Rye is a bread I love because of it’s depth of flavor, and also because of its ease of preparation. The starter does make it a bread that’s not a quick (or same day) fix, but once you’ve established the starter, you’re set until such a time as you have to- say, move across the country because the military decides you’ve accumulated too many friends and connections where you are?!?! Military life, y’all. I digress as I’m wont to do. What I’m trying to say is that the starter will last as long as you replenish it and keep it under proper temperature. I hear your wheels turning.

“What is a starter?”

It is the bread’s “Mom” in the simplest of terms. This mom (starter) is usually made up of measurements of flour, water and small amount of yeast. Allowing the starter to develop at room temperature for several hours or days, even, gives the wild yeasts a chance to develop. The starter is then incorporated into the dough to help it rise as well as improve the depth of flavor in the final product. It was, in the old days, the only way to leaven a dough. The “mother” is then replenished after each use with more of the initial ingredients. In this way, she can keep giving us “babies”…like a Queen bee keeps popping out baby bees! This bread’s starter is like that…but not in a gross, giving birth type of way…we need to focus on rye bread. 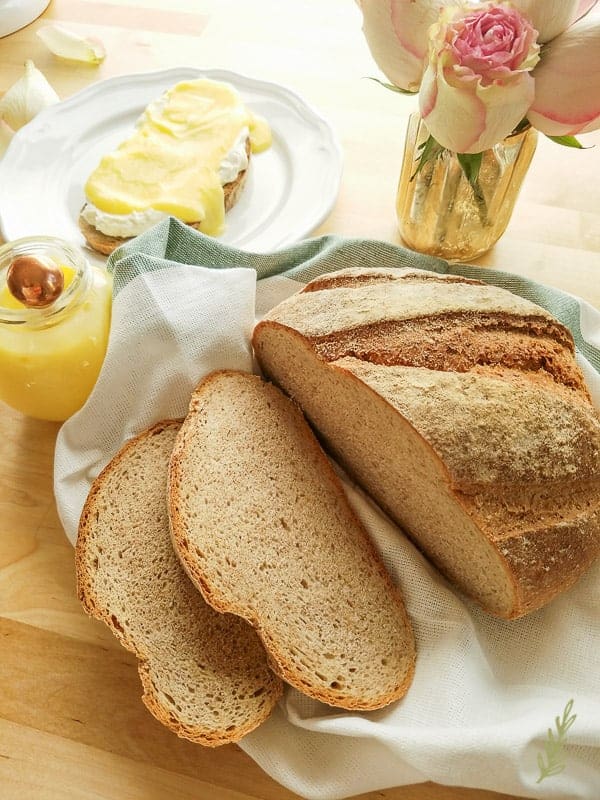 The bread! I have added duck fat, because I like it for the full-bodied taste it gives the bread; it also seems gluttonous without being really so- something truly needed right now. I have tested it with shortening and found its taste was flatter than with duck fat. Still delicious. Still impressive, but I prefer the latter. If you have dietary restrictions that prevent you from using the duck fat, lard is a great alternative, or just use the shortening.

There are certain techniques that are very common to bakers that may or may not be as common for the home chef. One of those techniques is the introduction of steam to the baking of crusty breads- such as this one. When we add steam to the baking process, we allow the crust to form at a slower rate. Steam aids in preventing the heat from baking the exterior too quickly which creates a crust rapidly, only to have the crust break after the expansion that will occur as the rest of the bread bakes. The steam keeps the crust nice and soft, so the bread can expand rapidly and evenly without the ugly cracking. We also add an additional step to prevent “ugly crust syndrome” by scoring or slicing the bread’s surface. Bakers use a lame (you know like “Adulthood is lame?”); a straight razor blade works just fine. It not only aids in the bread’s appearance, it also gives more room for expansion and helps eliminate cracked crusts. 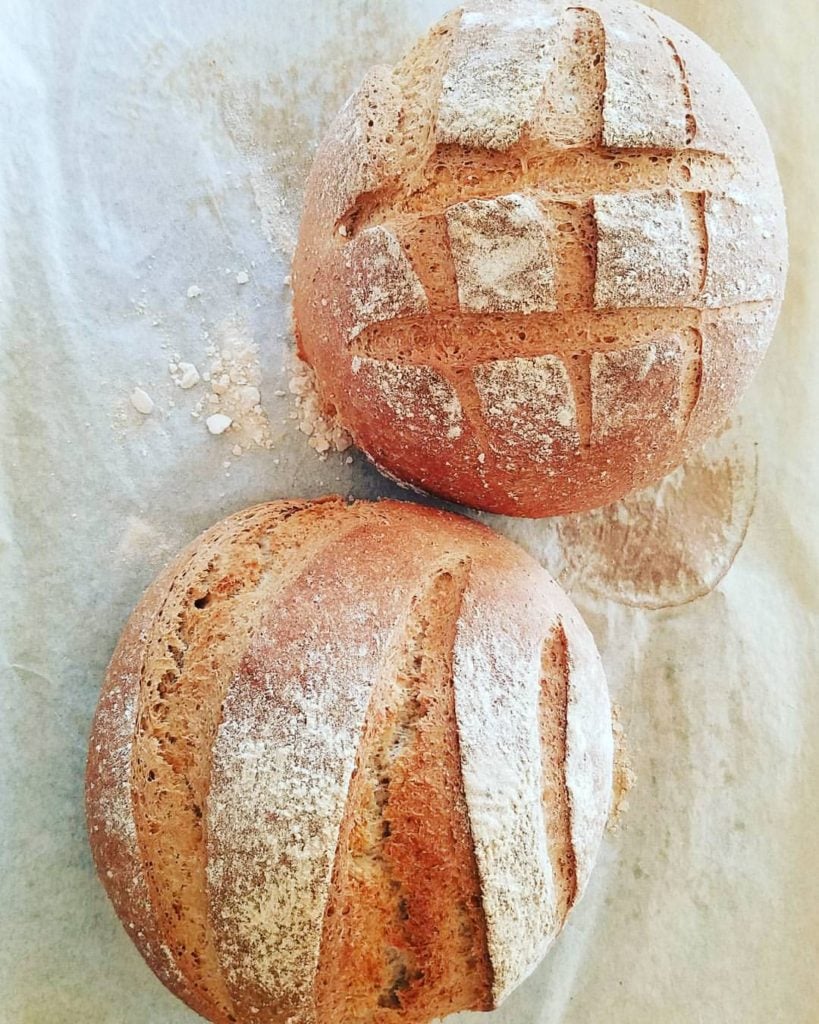 This bread is a two day affair if you don’t already have a starter chilling in the fridge; I thought I should let you know that going in. Once you have, and if you maintain, the starter, it’s just a matter of mixing it up! I always have a starter on hand, especially for days like today. I’m eating my bread slathered with lemon curd and cream cheese because, adulthood, ya’ll. I don’t want no parts of it today. Tomorrow, maybe. Not today.

In all fairness, I know the post office doesn’t have a personal vendetta against me. They probably mean well. The lack of sympathy for my frustration at not knowing where my packages were was what set me off. I’ve reached out to the proper supervisors and can only hope my packages are found. In the meantime, I’ll keep some rye bread on deck and ready to go. 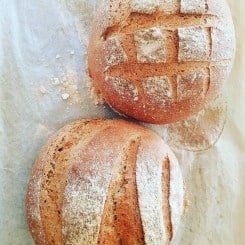 Although not always popular in the states, the best way to measure ingredients in baking is by volume. Invest in a digital scale and you'll see an improvement in the results  of your baked goods. This bread is good for up to two days freshly baked. You can also slice and freeze it for up to two months.
Tried this recipe?Mention @senseandedibility or tag #senseandedibility!

Try these Mallorcas or this Shakshuka in Crostata recipe for those “Adulthood Sucks” days. 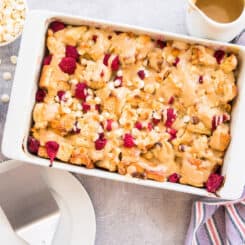 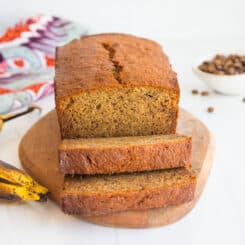 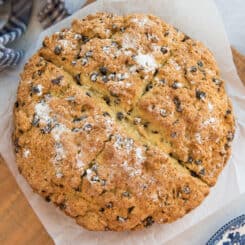 Aside from the written content of your piece being powerful in sucking me in…..those pics are amazing. Love how you tell your story, the rye’s story and how it all is kneaded so seamlessly together.

Thanks, Deb! This picture taking is a lot funner than it should be!