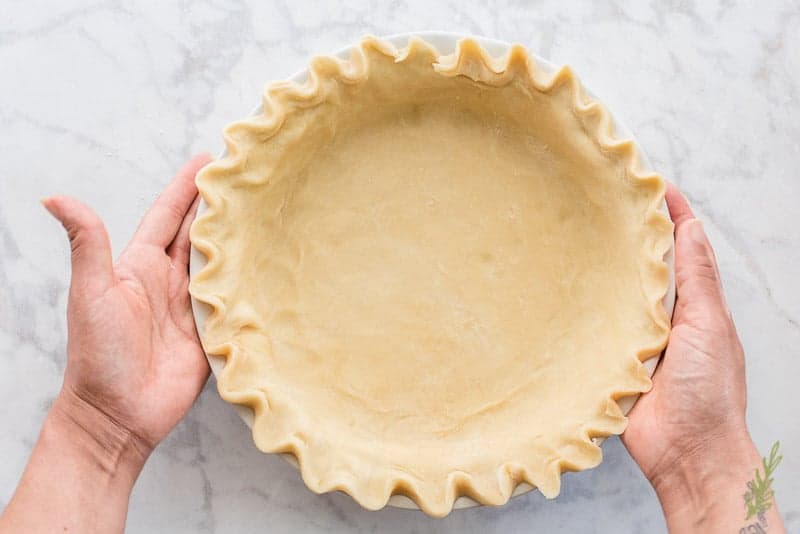 Okay, everyone! We’re getting down to the Holiday Baking wire. If you’re anything like me, you’ve got an houseful of guests looming. This recipe for Mealy Pie Dough is something you must have in your back pocket. Not only will it be the base for your Thanksgiving-Christmas-New Year’s-Three King’s Day pies; it’ll make for great quiche crusts for crowded brunches. Because of the multitude of ways this Mealy Pie Dough can be used, I make it in bulk. This particular recipe will make four ten-inch single crusts (for pecan or pumpkin pies and/or quiches) or two crusts (standard apple, or cherry, pie set-up).

So easy, it’s a shame we buy pre-made. 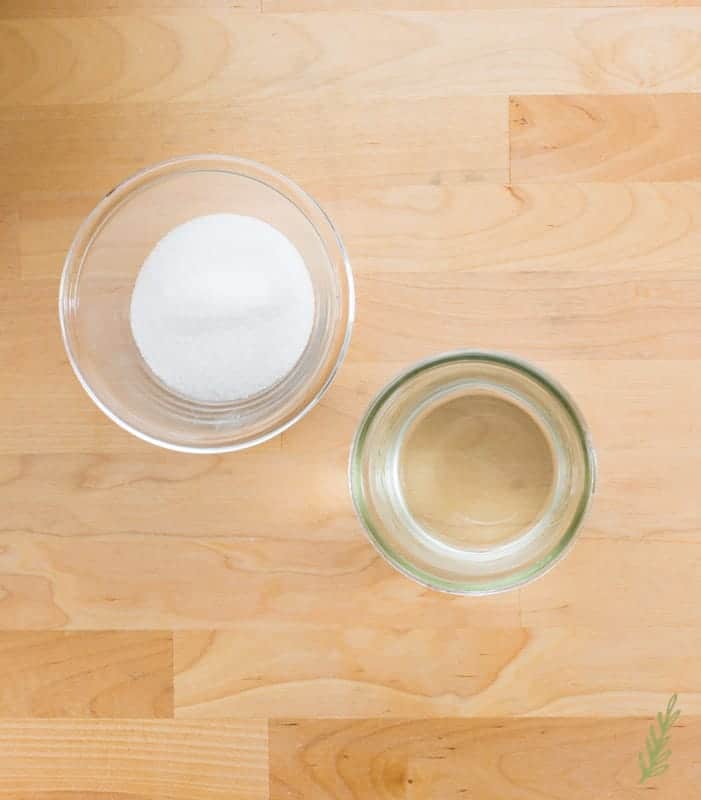 While I kinda get why people buy store-bought pie crusts, I kinda don’t. You can make your own pie dough in a matter of minutes, wrap them in plastic wrap and freeze them until you need them. It requires water, sugar, salt, flour, shortening, and butter. Like, that’s it. While the convenience of buying the pre-made stuff is tempting, it’s also more expensive and mass-produced…in factories. Don’t think, “Oh, well, it takes so long to prepare,” because it doesn’t. Measuring out the ingredients is a snap and mixing the dough is just as easy. I’ll prove it to you. 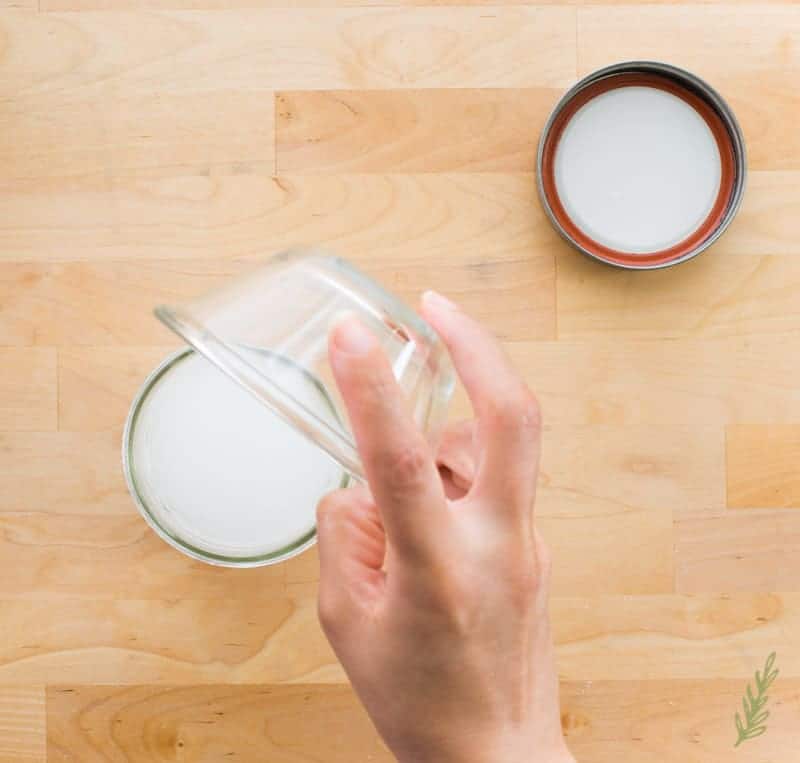 The sugar and salt should be dissolved prior to adding them to the pie dough. Not doing so will leave you with a grainy dough. The issue comes from the absolute need to use ice cold water for making our pie dough. A cold mixture prevents the fats from melting when we handle the dough (during cutting in the fat and kneading the dough). But, when you attempt to dissolve granular substances in cold liquids, they take longer to melt. I help the process along by adding the sugar and salt to ice cold water that I’ve measured into a wide mouth pint size mason jar. This helps the two to be evenly distributed once I add this liquid to the flour. Hence the reason I do this before I do anything else. 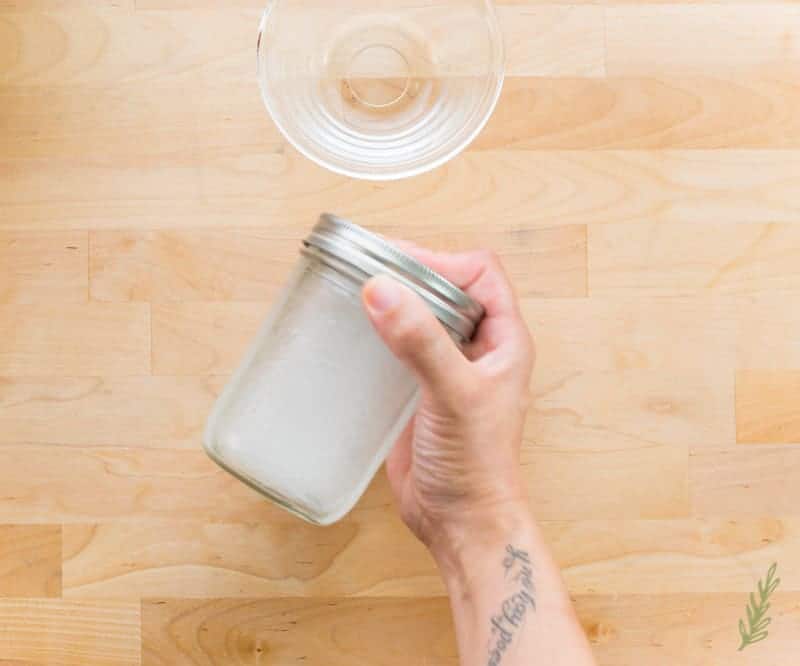 Types of fats used in a Mealy Pie Dough, and why.

When making mealy pie dough, you want to cut the fat into much smaller pieces that you would for a Flaky Pie Dough. That’s one of the biggest differences between the two- the degree to which the fats are blended into the flour. For the mealy version, you want the final flour-fat mixture to resemble a coarse cornmeal. The flour is coated in the fat, resulting in a tender (short) pie crust, as well as one that won’t absorb as much liquid as its flaky counterpart. This is the popular reason for why most mealy pie doughs are used for bottom crusts, whereas flaky doughs are used for top crusts. Truth be told, my children aren’t Michelin guide food critics, and neither is the Soldier. They couldn’t care less about which dough I use where, so long as the pie crust is flaky.

Both of my pie doughs make pies that are flaky- just like me, thank you very much.

The types of fat I use for my mealy pie dough are hydrogenated shortening (like Crisco) and unsalted butter. Typically, I avoid using shortening in my kitchen, but even I have to admit that shortening stands up to the handling required to make a pie dough. It tastes like crap on its own, though, so that’s where the butter comes into play. The balance of the high-temperature, yet firm shortening, along with the flavorful butter, is what makes this pie dough easier to work with, and tasty at the same time.

Cutting in the fats.

The proper culinary term for incorporating fats used into pie doughs is “cutting in“. To start, though, you’ll need to add the shortening to the flour you have measure into your large mixing bowl. Because butter is fickle when it comes to warm temperatures (your hands), I freeze the butter that I plan to use in this recipe for a half-hour beforehand. To speed up the cutting in process, I then shred my ice-cold butter using a cheese grater. Both of these steps ensure the butter is still cold by the time I begin cutting in both fats. 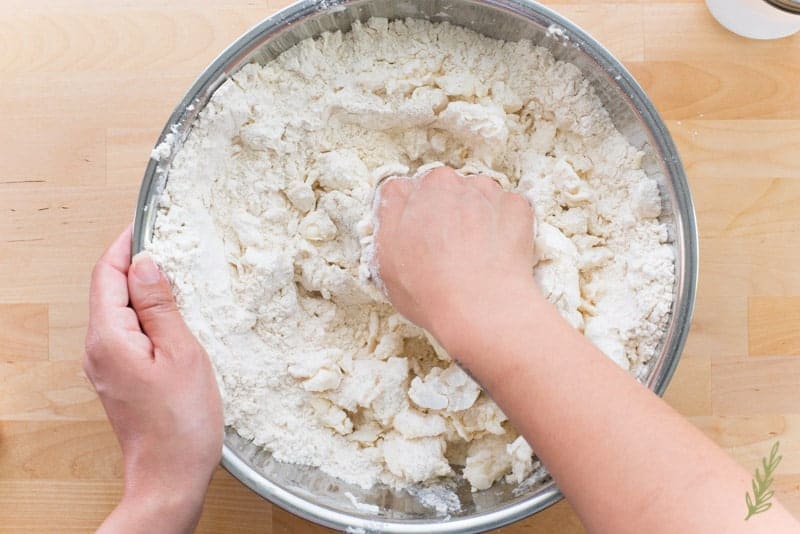 That’s pretty straightforward. You can literally cut it in (with a pastry blender), or just rub it between your hands and fingers. You can see which avenue of approach I take. Extra dishes is whack, yaknowwhatI’msayin? I rub the two to encapsulate the flour in that waterproof barrier of fat. This all helps to contribute to that lack of absorption mealy pie dough is known for.

Once you have that coarse cornmeal consistency, give the salt-sugar water another vigorous shake and pour it into the flour mixture. Water is one of those things that is a necessary evil. We need it to develop some gluten (texture) in the pie dough, but too much of it will leave us with a tough, rubbery mess. Too little water, and our pie dough will fall apart because the proper amount of gluten will not have developed. Oh, woe to us!! Whatever shall we do?

Um…nothing. Because we will add the right amount and all that I’ve written prior to this will be a moot point. Add the water to the flour-fat mixture and knead, gently, just until there’s no loose flour and the dough holds together. Even if it seems a bit on the dry side, don’t add any more water. As the dough rests (which it must), the flour will continue to absorb the water and become hydrated. The proteins in the flour will plump up and you’ll find a perfectly mixed dough on the tail end of the resting period. 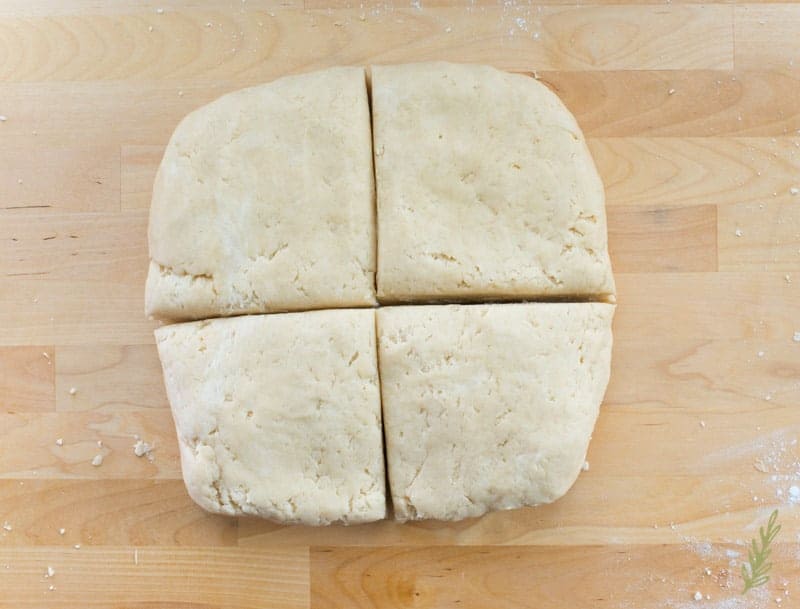 I’m making this sound more war-like than it really is. Once your dough is mixed, flatten it out into a disc. Use a bench scraper, or a knife, to divide the dough into four equal pieces. Wrap each piece in a double-layer of plastic wrap and allow the dough to rest in the refrigerator for at least thirty minutes. This rest period allows the flour to hydrate fully and gives the gluten in the dough time to relax which will prevent your mealy pie dough from shrinking as it bakes. That thirty minute’s rest is crucial to a beautiful pie crust. Even better, is letting the pie dough rest overnight! If you don’t need the pie dough right away, i.e. you’re pre-planning (you genius, you!!) place the wrapped discs of dough into freezer storage bag and freeze them. They’ll keep, frozen, for up to two months.

When you’re ready to use, just roll out a disc using a rolling pin and bake as your recipe instructs!

These are great ways to use a mealy pie dough: 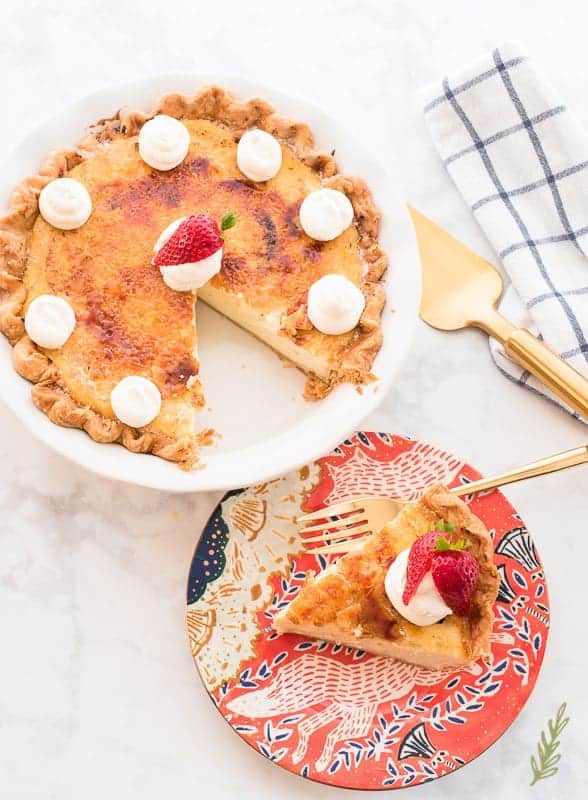 Mealy pie doughs are great for custardy pies like this Crème Brûlée Pie. The fat-coated flour in the dough doesn’t absorb the hyper-liquid custard filling of this pie, which makes it the perfect base for the dessert. 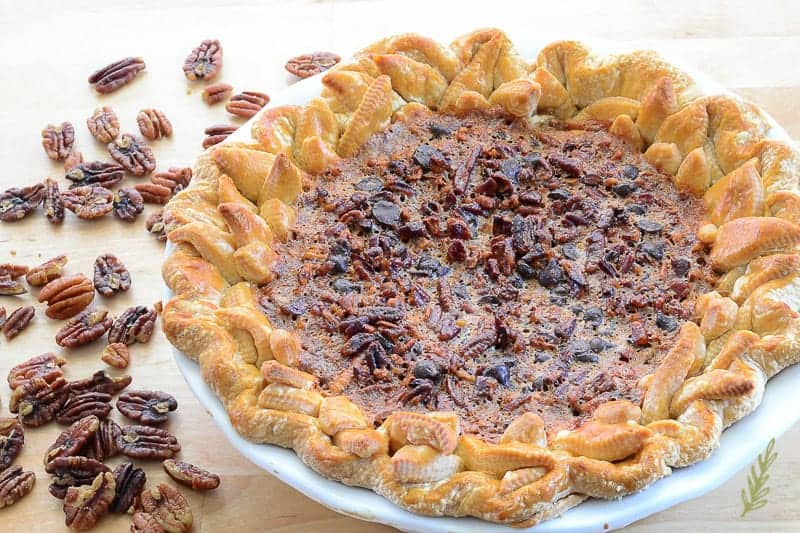 My Maple Bourbon Chocolate Pecan Pie also has a very runny filling. This mealy pie dough doesn’t even bat an eyelash at it, though.

Both of these sweets are great ways to utilize your new Mealy Pie Dough recipe.

What to do with leftover pie dough?

So what happens when you’ve rolled and trimmed your pie dough? What do you do with the scraps?

Well, after the first roll of the dough, the remainder tends to become really tough from over-handling. I like to cut the pie dough scraps into chip-size pieces and bake them with a sprinkling of cinnamon sugar. My family- especially the Twins- tear these up as sweet snacks. There’s not much else to do with them, because a pie made from these crusts just doesn’t bake as tender, or flaky, as one made with a dough that’s only been rolled once.

If you must reuse them, press them into a pile, but don’t knead them together. Wrap them in plastic wrap and let the dough rest in the refrigerator for an hour. Then knead, lightly, and re-roll. This would be best suited for a quiche.

Pin this recipe and get started on your batch for the holidays!

Print it Pin it Rate this recipe
5 from 5 votes

I made this pie dough for Thanksgiving and it turned out so great! I am not a chef and have been known to have a few kitchen disasters, but this was easy to make and came out perfect. It also tastes delicious. Sometimes I think pie dough has a floury taste that I don’t care for, but this was light and buttery. I made some cinnamon chips with the leftovers and we ate them all.

I’m so glad we conquered the floury taste, Kris!!

I haven’t tried mealy dough before but I’ve added it to my Thanksgiving menu this year! The crust is my favorite part of a pie, so I can’t wait to try your recipe!

It’s mine too, Maegan!

This looks so incredible! I always buy pie crust, but you’re giving me motivation to make my own!

Ok, it is a shame I buy pre-made. This is easy! Your recipe will be so wonderful for the holidays!

It absolutely is! It may seem labor intensive, but it really isn’t.

I have only tried to make a crust a few times and failed. Your recipe looks simple enough even I can try it.

It really is! The key is keeping everything VERY cold!

Excellent tips, Marta! I’ve not attempted a mealy dough before but you’ve motivated me to start my Thanksgiving pie planning and making.

They’re great for those custardy pies like pumpkin and sweet potato!

This is brilliant! I am baking for my brother’s Thanksgiving dinner. I love this recipe! Thanks!!!!

Your brother is SO lucky! No one bakes for me 🙁

This is going to save me for the holidays!!! I love these pie crusts can be frozen for up to two months! That’s life changing! I also liked your explanation about the fats…I’ve always wondered why those specific fats were needed.

I’m glad I could explain it for you! Happy baking!

This looks so good! I’ll bookmark this for the future.

Awesome, Marissa! I hope you enjoy it!

Oh oh! I have been wanting to learn how to make this. I’m going to make this for sure. We love apple pie and lately my hubby is requesting pumpkin. Going to try my hand at this.

I know it’ll be a hit. My family loves the pie crust almost as much as its filling.