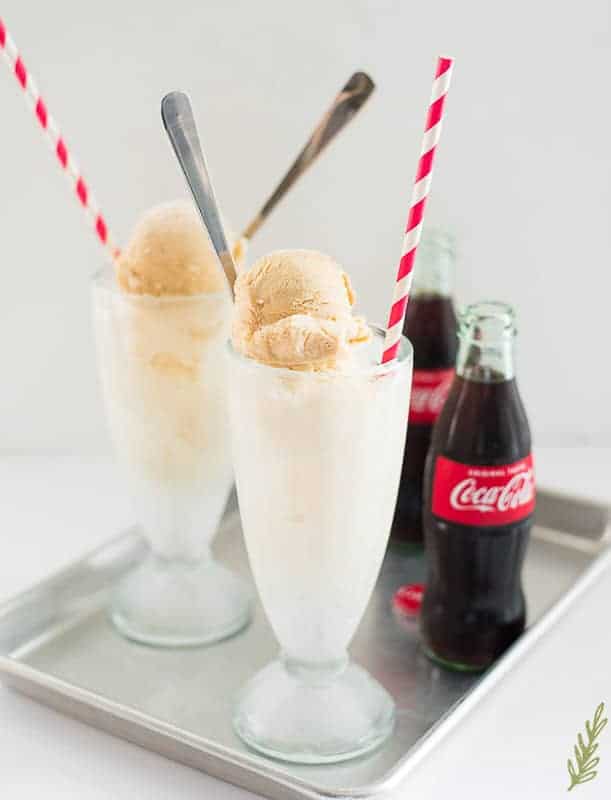 Okay, kiddos are back in school, and I trust you’re settling into a sweet groove, right? Right. Now it’s time for a PLOT TWIST!! The holidays are coming up! Ha ha ha!!! You thought life was going to be easy, didn’t you? NOPE! Well, it sorta kinda is. I start prepping for my holiday meals long before they put out decorations in sane stores (side-eyeing your early ass, Hobby Lobby). I highly recommend you start early too. The first recipe that I make and stock up on are sweets like this Vanilla Frozen Custard.

Why? Well, because frozen custards get scooped onto everything from my cheesecakes to my pies. Vanilla Frozen Custard also gets blitzed into milkshakes, plunked into boozy punches, or sandwiched between my favorite holiday cookies. It’s a must-have for the upcoming festivities.

Pure ingredients…that you can pronounce. 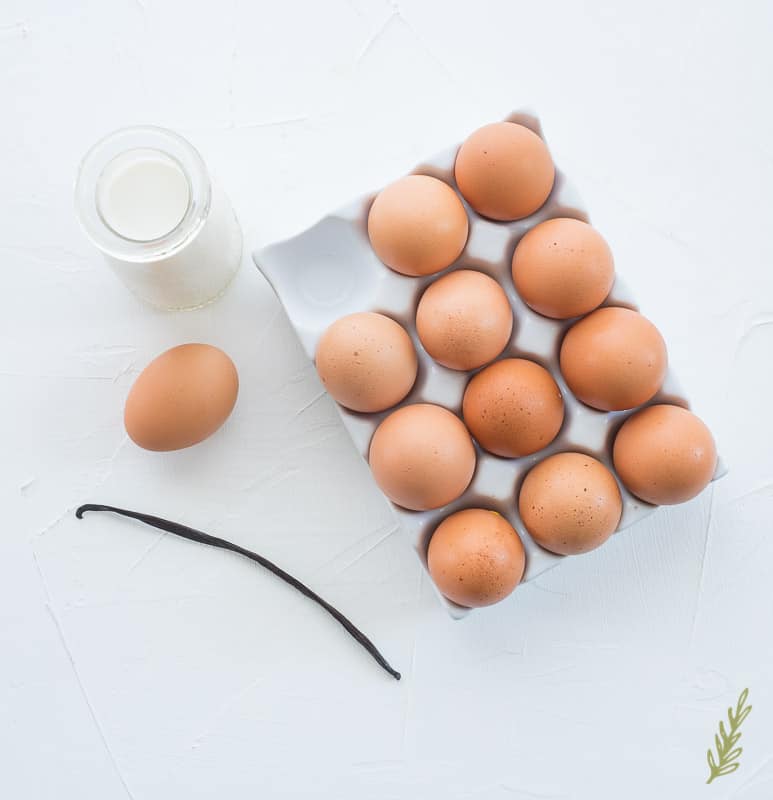 I have a guilt complex about buying mass-produced foods from the supermarket. Call it what you will, it’s good for food blogging, but it does stress me out unnecessarily. I’m notoriously peeved when I can’t pronounce the ingredients in a simple pint of vanilla ice cream. My frozen custard doesn’t leave you with that feeling.

Eggs, vanilla, sugar, cream, milk, and pinch of salt. Everything that’s in this Vanilla Frozen Custard is easy to say and identify.

Creating the Vanilla Frozen Custard base 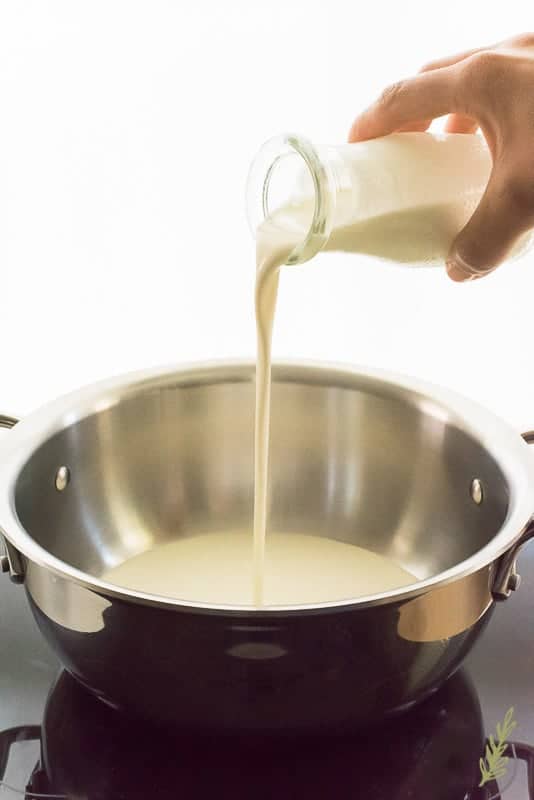 The custard’s base is straightforward and to the point. Dairy is brought to steam in a three quart saucier. This pot has curved sides which means your whisk can stir the base and grab everything in the pot. What I mean is that the milk fat solids won’t settle into the corners of the pot and burn. A pan with sloped sides is the best thing to use in making any type of custard.

One of the milks we’re using is whole milk. The use of low-fat or skim milk in frozen custard is damn near a crime. You need a good mouth-feel (are you laughing?) when making frozen custards. That’s only achievable with high-fat milks. 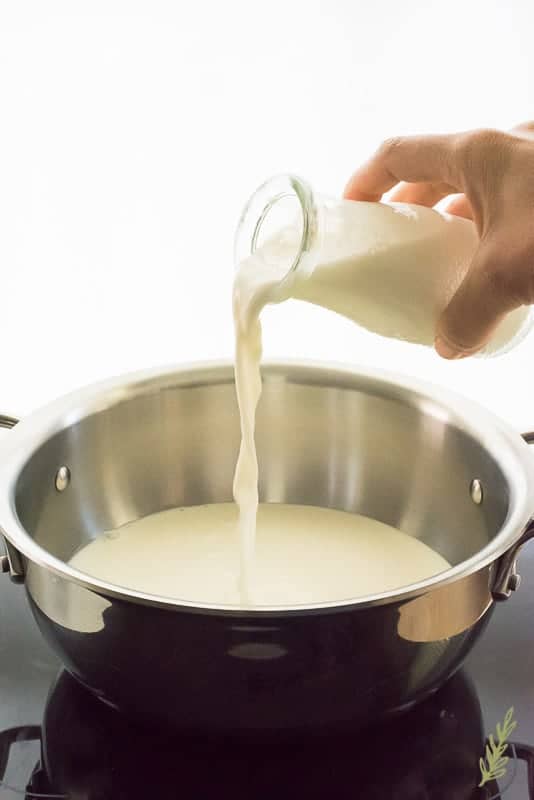 We’re also adding the heavy cream to the pot along with the whole milk. 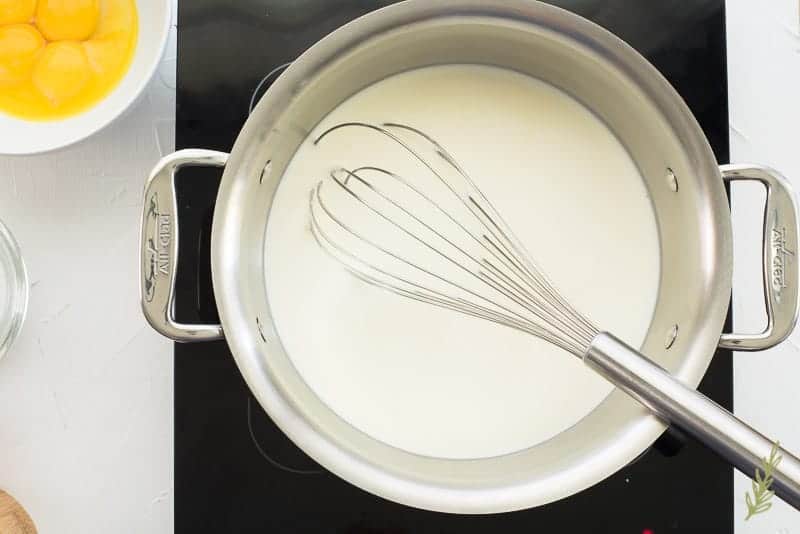 Grab your whisk and combine the two liquids. 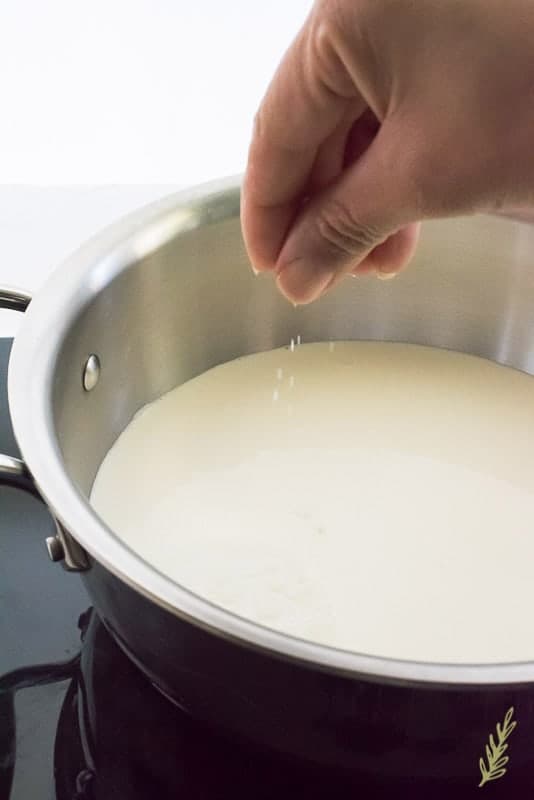 Add a pinch of kosher salt to the milk-cream mixture in the pot, and bring this to a steaming point. Don’t let the milk simmer or boil. Doing either of those can lead to scorching pretty quickly. If you end up scorching the milk (burning it), you may as well chunk it because it’s going to taste of char. All you’re looking for is steam to come off of the surface of the milk in the pot.

Flavoring the Custard Base 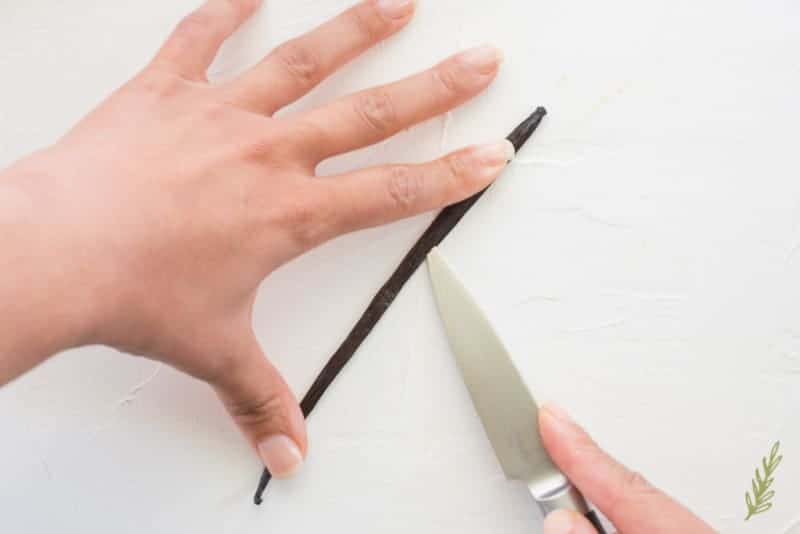 A Vanilla Frozen Custard needs a vanilla bean, obviously, but I double up the vanilla with the beans and some vanilla extract (this is added after thickening). Because the market is experiencing a shortage, vanilla beans can cost you your firstborn. If you can’t justify purchasing a packet of whole vanilla beans, then just double up on the amount of extract (or vanilla bean paste) and add it at the end.

If you opt to use the whole bean, begin by splitting it open (lengthwise) with a paring knife. 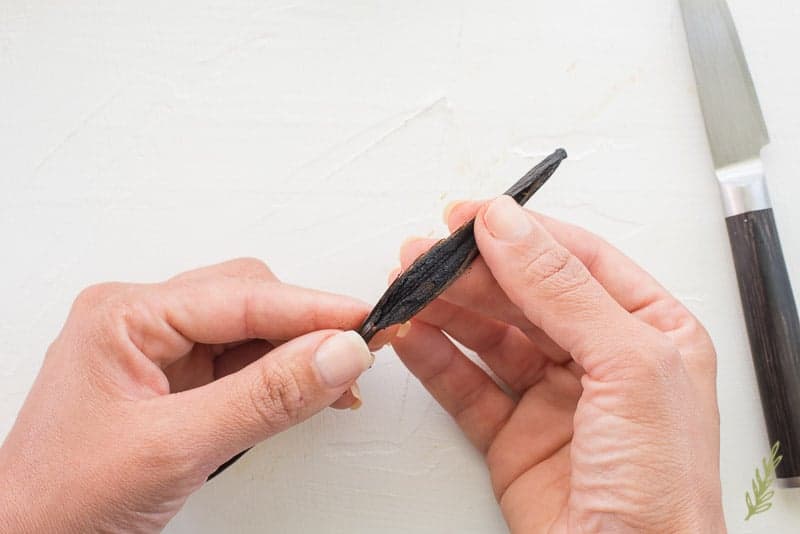 Use the back edge of the knife’s blade to scrape out the seeds and flick them into the pot with the milk. 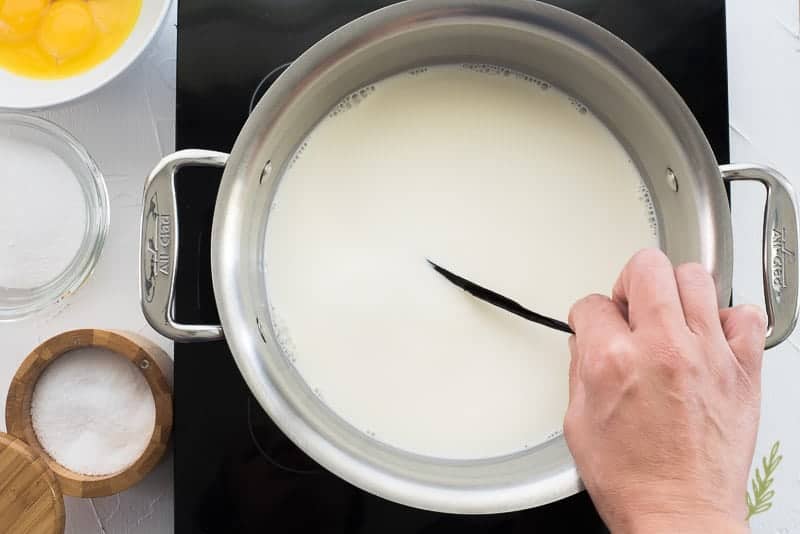 Dump the scraped vanilla bean into the pot, as well. Once the milk has begun to steam, turn the heat off and allow the mix to sit for five minutes. This takes a little of the heat off of the milk mixture.

Tempering: What is it? Why is it important? 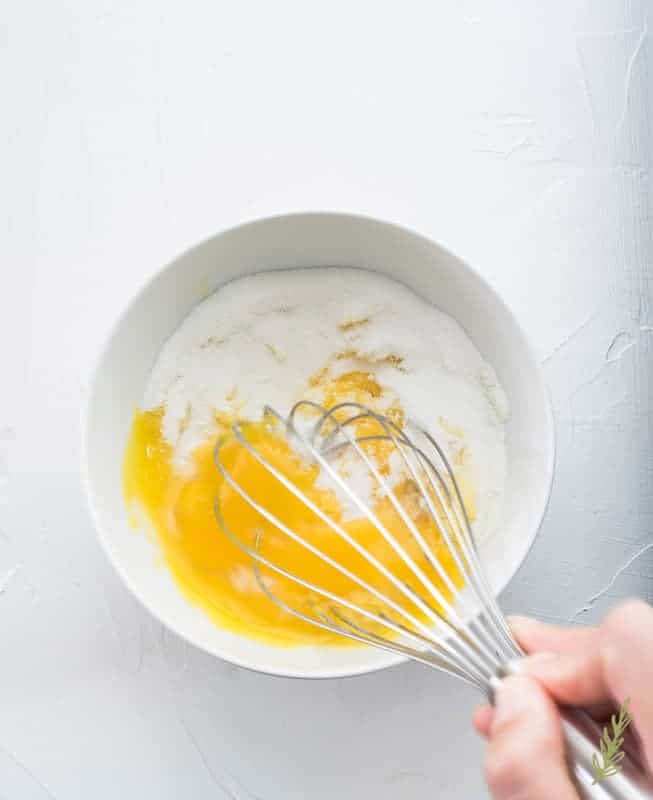 Have you ever had sweet scrambled eggs? Hopefully, you said no. While I’ve never had the pleasure of tasting sweet scrambled eggs, I’m going to go out on a limb and say they can’t be very appetizing. Tempering is the process of introducing sensitive liquids (like eggs or cream) to a hot liquid (like our milk). Adding the eggs to a very hot liquid will cook, or curdle, the eggs before you have a chance to incorporate them. Sweet scramble eggs. The tempering process slowly introduces the hot liquid into the eggs, thus raising their temperature gradually.

To get to that point, though, you need to add the sugar to your eggs first. In a small mixing bowl, combine all of the sugar with the egg yolks and whisk them until the color of the mixture is a light yellow (lemon-yellow). Just use the same whisk you used earlier. If you find that your bowl is spinning around on the countertop, place a damp kitchen towel under it to hold it still. 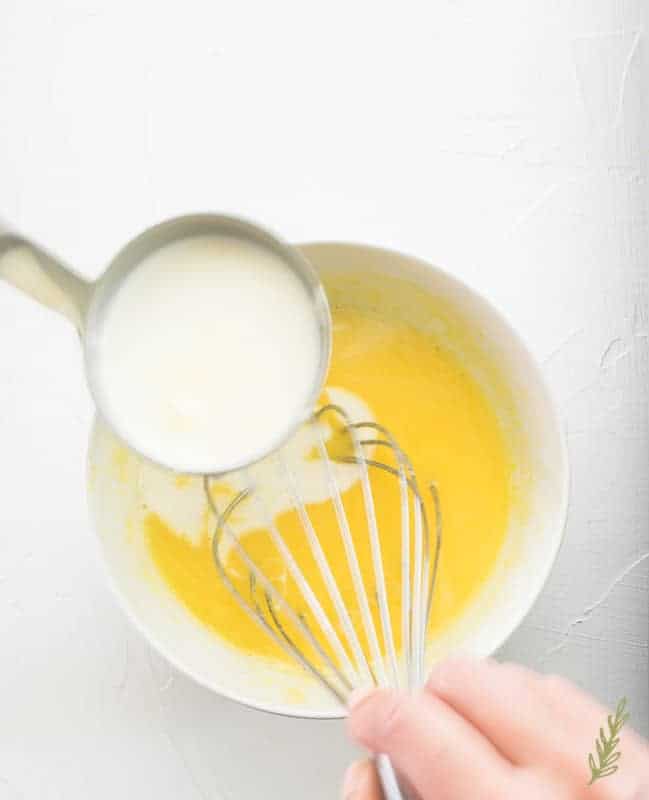 Use a ladle to scoop out some of the hot milk mixture from the pot. Slowly drizzle the milk mixture into the eggs while whisking constantly. Don’t. Stop. Whisking. You need to keep those eggs moving to prevent them from being cooked by the hot milk. 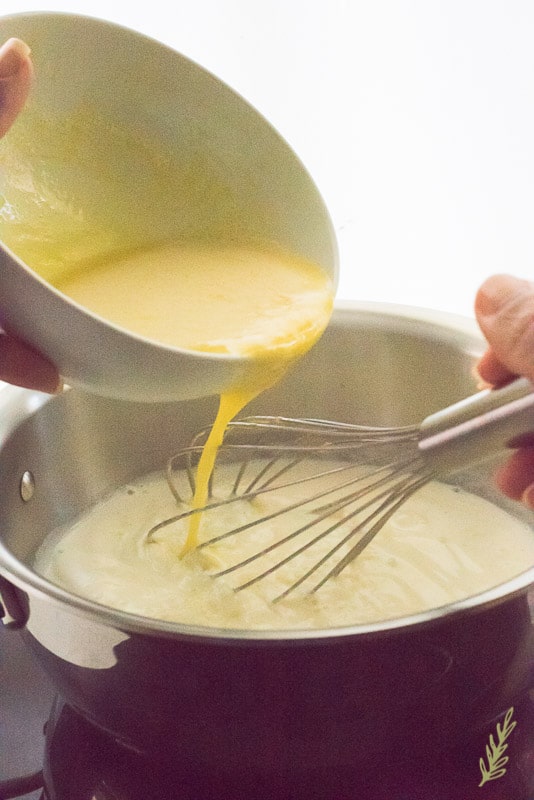 After you add the the milk, reverse the tempering process by adding the eggs to the milk in the pot. Slowly drizzling them into the hot milk mixture, while whisking constantly. 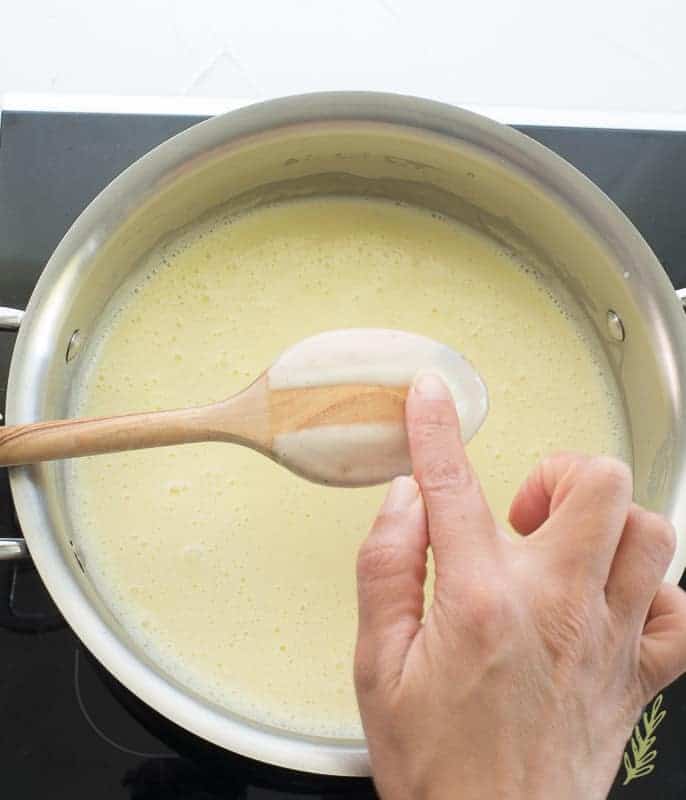 Return the pot to the stove and heat it, stirring constantly with your whisk, until it thickens. This should take anywhere from five to ten minutes. Don’t allow the mixture to boil, this will cause the milk to curdle and separate. The surface of the mixture should look like thick pudding as it moves. To test that the base is properly thickened, use a wooden spoon to see that the custard nappes it. A nappe is a thin covering- which is what we want the custard to do to the spoon. Run your finger down the back of the spoon. This mark should hold its shape through the custard. If the custard runs into the divide, heat the mixture a little longer until it is the proper thickness.

Once your custard has reached the proper thickness, stir in your vanilla extract. Transfer the custard to a food storage container and cover. Refrigerate for twelve to twenty-four hours. I prefer the latter because aging the custard allows the proteins in the custard to bind with the water molecules and plump up. All that contributes to that mouthfeel that’s so essential to a great custard.

After the custard is chilled through remove and toss the vanilla bean. Churn the custard in your ice cream maker according to the manufacturer’s instructions. The frozen custard will have a soft-serve consistency after churning. You should get between one-and-a-half to two quarts from this recipe, depending on overrun. Overrun is the term used for the amount of custard wasted in the machine or ice cream bowl, when it is removed from the ice cream machine.

Transfer the frozen custard to a plastic ice cream container, or a disposable one with a non-vented lid (prevents the ice cream from oozing out or taking on foreign flavors from its freezer-mates). 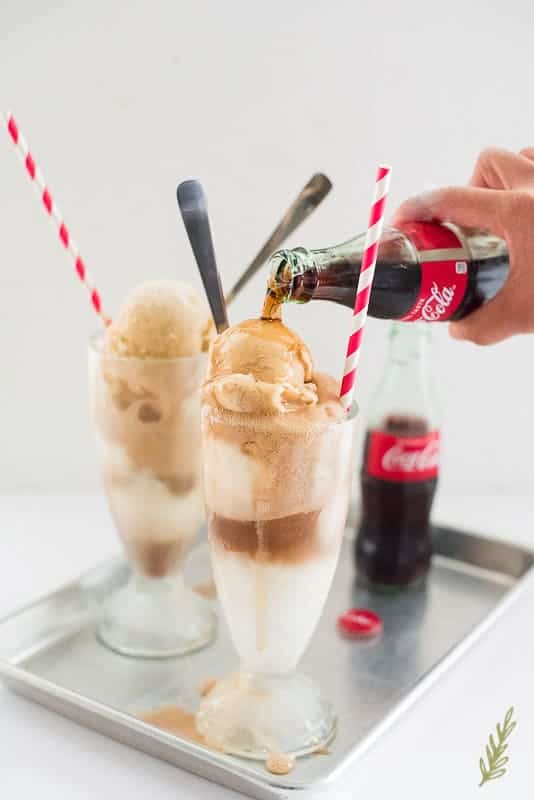 One of my favorite ways to serve this Vanilla Frozen Custard is in a Coke float. We scoop it into milkshake glasses and pour Coke over it. 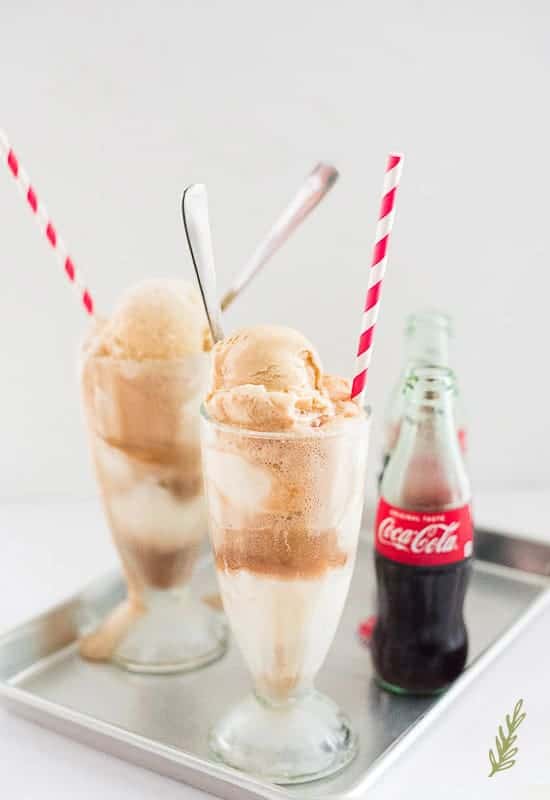 Best end-of-week treat ever if you ask me. 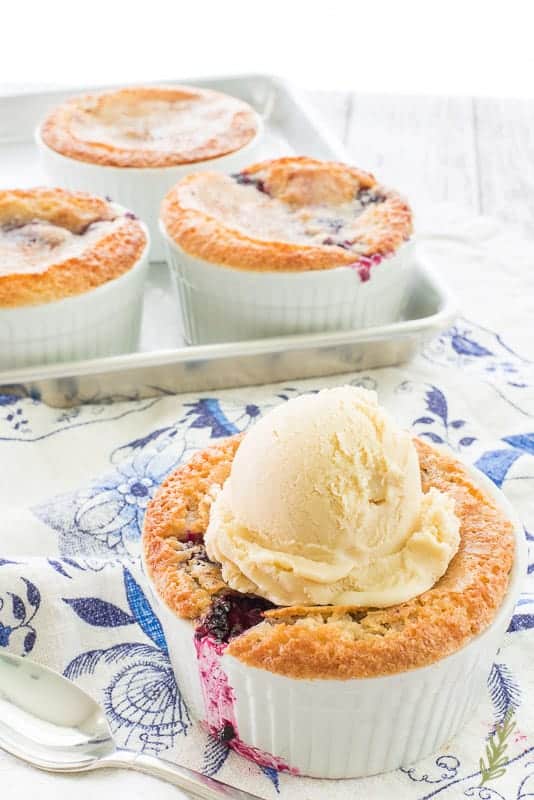 This Blackberry Cobbler is another way I like to enjoy this custard. No matter if you serve it a la mode, or on its own, you’re going to love it. Pin this recipe for your upcoming festivities! 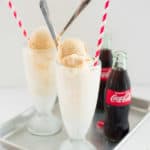 Print it Pin it Rate this recipe
5 from 5 votes

Vanilla Frozen Custard is just the tip of the icecreamberg.
Try my other frozen custard flavors: 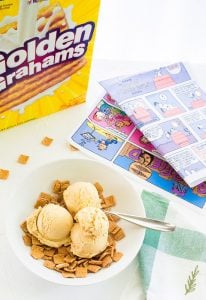 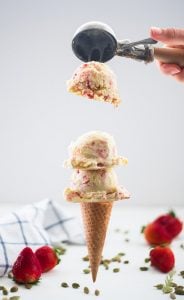 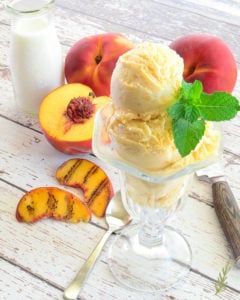 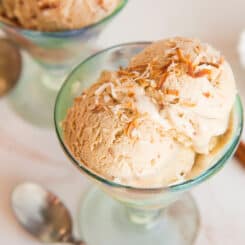 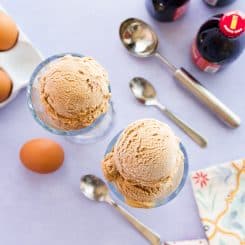 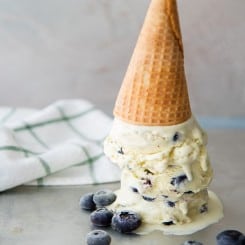 Great post and recipe! I love your simple ingredients. I’ve been cranking out around 40 quarts of frozen custard here per week. Number one to me is that it’s cream, milk, sugar, eggs, and fruit. That’s it! And folks can tell a difference when it’s fresh. Thanks.

Yes, frozen custard needs nothing else.

My grandmother always makes ice cream from scratch…..my brother started doing it as well., I need to get into making it and try custard also! Looks so good

You’re going to love this one.

My mom made custard a lot when I was growing up, but I have never tried to make it myself. However, your recipe has reminded me of how much I loved the rich, creamy taste. Hopefully, I can follow your directions and produce something tasty!

Yep, just follow the directions and you’ll be fine.

I can confirm sweet scrambled eggs are digusting… I might have had an accident making a recipe hahaha! Apart from that, this sounds amazing, I love vanilla (way more than chocolate, sue me) and this sounds like the perfect post dinner snack

I’m glad I’m not the only one who’s suffered the fate of sweet scrambled eggs, Mimi!

This vanilla frozen custard looks so good! I can’t wait to make this!

Frozen vanilla custard is looking awesome. I am bookmarking this drink. You explained each and every step, so clearly. Love your photography.

Thanks so much, Silpa! I hope you enjoy it!

I’ m going to try to make this with your recipe. My husband loves custard, and it hasn’t turned out every time I’ve tried to make it for him. Yours looks amazing!

He’ll really love this Maegan! I hope you do as well!

0
Reply
Sam | Away She Went

I’ve been making a lot of homemade ice cream lately, but I’ve never tried a frozen custard! This sounds amazing! I’m going to add it to my dessert recipe rotation!

0
Reply
Marta Rivera
Author
Reply to  Sam | Away She Went

You’ll definitely have to try it! It’s so much richer than ice cream!

If I could pick a delicious drink to have right now! It would be this one. YUM!!!!!

It would definitely hit the spot right now, Cas!

This looks like such a labor of love. I’ve never made custard or ice cream from scratch before, but you make it look easy!

It really it, Catherine! I love making my family think it’s hard, though. LOL!!