May 26, 2017 by Marta Rivera
Use day-old challah or brioche bread to ensure the best result. Although dark rum is preferred, white rum is an acceptable substitute. See notes for make ahead instructions.Special Equipment Needed:
Get RecipePrint Recipe
346Shares 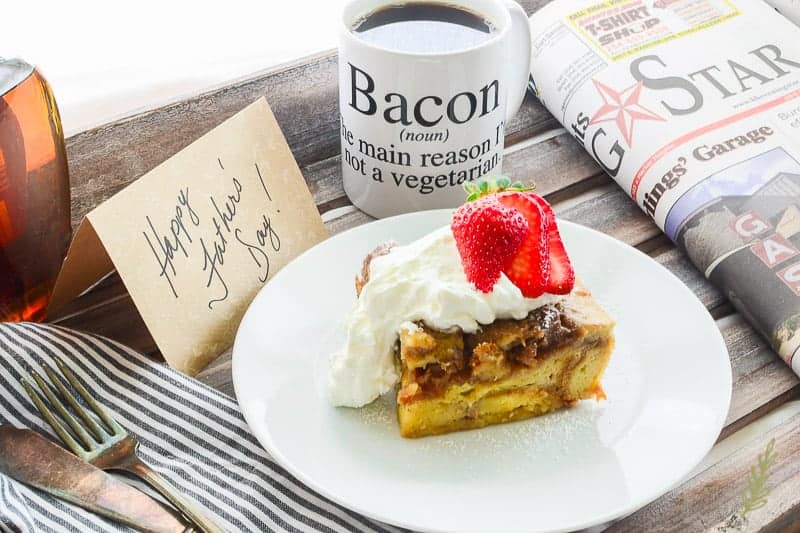 My husband gets mad at me sometimes. It’s typically because I’ve “hidden” some recipe in my “secret recipe box” to “punish” him. Why he thinks I need to punish him like that? Who knows? I have a credit card to do that with. But, he has his conspiracy theories, so I just leave it be. I made this Bananas Foster French Toast once, and he lost his mind.

“Uh, how long have you known how to make this stuff?”
“Stuff? You mean bananas foster, or french toast?”
“THIS!! The stuff with the sugar and the rum and the bananas all gooily coated in it!!”
“‘Gooily’ isn’t a word, you know that?”
“Girl! How long?!?”
“Since I was, I don’t know, 14 or 15? What difference does it make?”
“I’ve given you MY LIFE! My heart and my soul!”
“Or, too many deployments and grey hairs…”
“Why have you been withholding this from me?!?”
“Because I want you to suffer, that’s why. Seriously, dude, it’s french toast. Eat it and stop crying.”
“Mmmhphmm…watch, I’m gonna eat it, but I’m ticked off at you. I’m gonna eat the hell out of it right now, and be mad at you.”

And so it goes. Anytime I introduce him to a recipe that he falls in love with, it’s like I’m introducing him to my lovechild who was fathered by the UPS man. He probably wouldn’t be as upset if I did have an illegitimate child with a delivery guy- so long as I didn’t hide the fact that I can make bananas foster ever again. Strange the way the man gets with food.

I learned how to make bananas foster after a long summer of boredom at home. Reading through my parents old cookbooks, I found a recipe for the dish.

Obviously, as a 15 year old, I had to forgo the rum. As a result, I wasn’t thrilled with the final product. Throughout the years, though, I would continue to try to create a version I loved. This bananas foster is the one I yelled, “Eureka!” with when I was 19. Still too young to buy rum, I’d give the homeless guy in front of the liquor store $10 to cop a bottle for me. Hey, quid pro quo is alive and well, people.

I tend to get bored with recipes easily, consequently, my bananas foster became ho-hum after a few years. There had to be more to life than ladling it over vanilla ice cream…right? I started plotting and, finally, developed this french toast casserole that has the bananas foster baked right in. Cue the psychotic ranting of my beloved.

If you love bananas foster, you probably know the story of how it came to be. Like most famous recipes, some executive chef- in this case Paul Belangé of Brennan’s in New Orleans, LA- was asked to create a recipe for some big-wig customer. So, as with molé, nachos, and myriad of other dishes, the recipe stuck and bananas foster became legendary.

Now, I do make french toast the traditional way- in a buttered sauté pan, but not as often as I bake it. For me, baking french toast in a bread pudding-esque way is not only more convenient, it’s decadent. In my opinion, it’s like eating dessert for breakfast, and I mean, really…how can that be a bad thing? Hence, this recipe is not only a great way to make breakfasts easy by making it the evening before and baking the morning of; it’s the perfect recipe to include at brunch, as well.

This bananas foster french toast casserole has a permanent spot on Hector’s Father’s Day menu. Since he’s the one who spazzed the hell out about not being informed of its existence; it’s only right he has it. Every. Single. Year. For life.

So, let’s introduce this rage-inducing recipe to your family! Skip to the bottom if you want to dig right in to cooking- you’ll miss my witty quips, though. 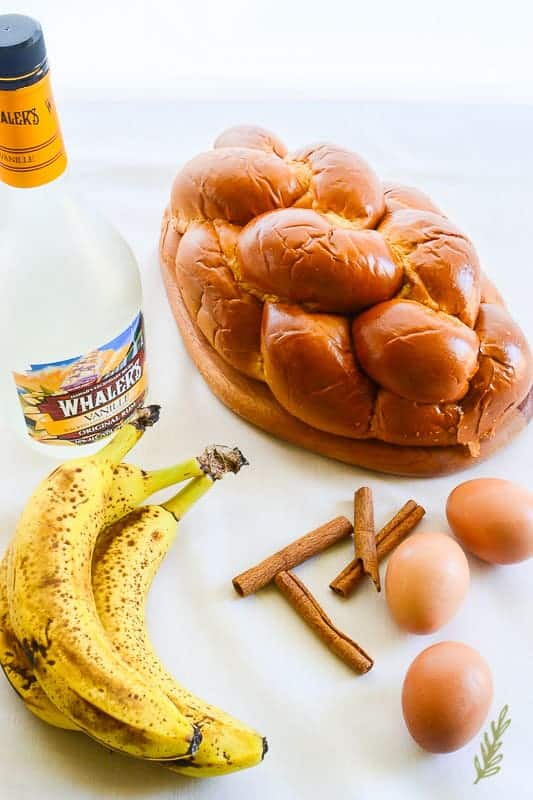 Since we’re friends now, I’m going to tell you what I tell all my friends when I’m talking food: mise en place. Have you ever been elbow-deep in a recipe, only to realize you’re lacking enough of an ingredient? It’s the worst, isn’t it? This is why mise en place is such a fundamental principle in the kitchen. It helps to eliminate the need to run out to the grocery store in between steps. Life saver really!

This phrase is the first that you learn in culinary school, as well as the one that you’ll remember, and practice, throughout your life afterwards. Simply put: get your “ish” together. Recipes such as this one, that involve a few steps, mean having all of your ingredients measured out and ready to roll becomes a time-saver. 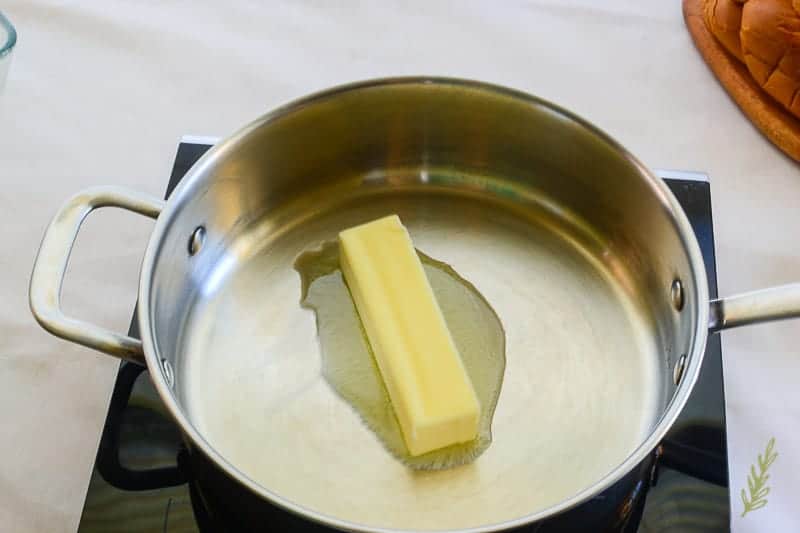 So, now that we have our mise en place “en place”, we’re starting with melting the butter over med heat. I always use, and highly encourage my friends to use, unsalted butter in all of their cooking. No two brands salt their butter the same, therefore, using salted butter can result in overly salty dishes. You always want to be able to control the salt content of your foods, so save the salted butter for slathering on toast. 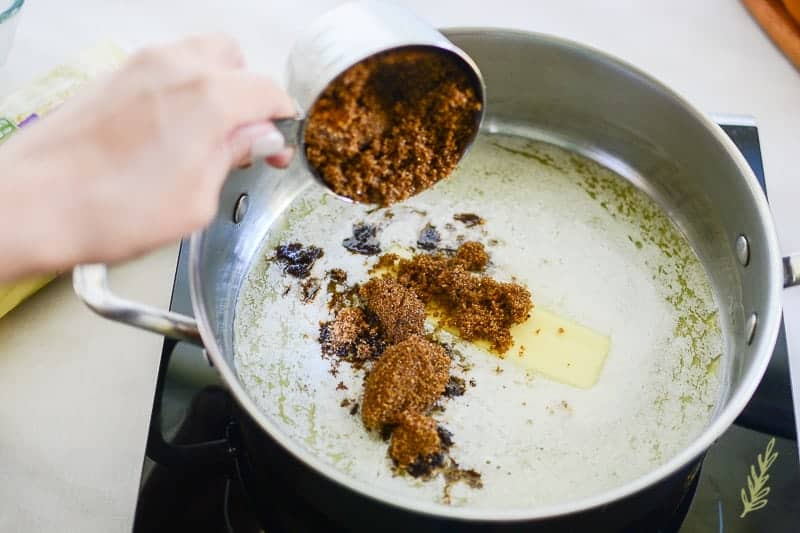 Once your butter has almost melted, add your dark brown sugar, and whisk until it’s partially dissolved. The fat may remain separated- that’s okay; the booze will bring it together…kind of like it does for people. I’m so philosophical. 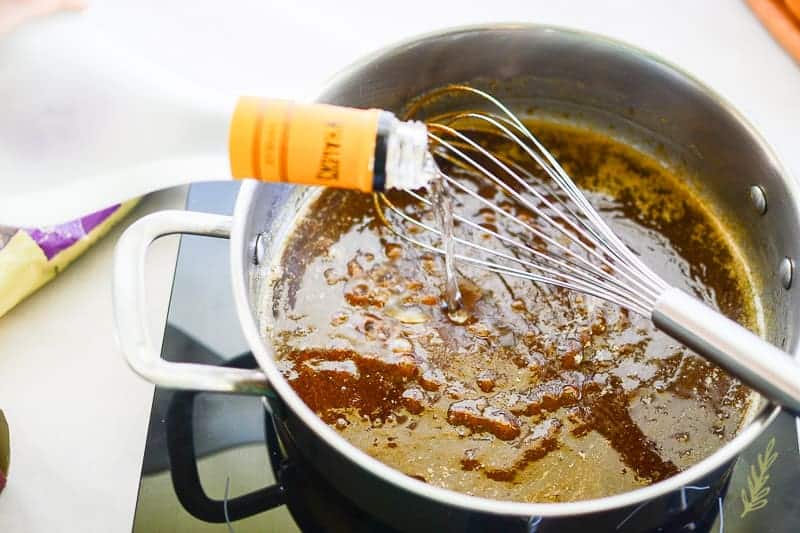 Next, add the rum. While bananas foster is made with dark rum, the only dark rum I had in the pantry was 151. Yeah, my kids were going to be eating this, and although I know that alcohol burns off during the cooking process; I’m not sure pure gasoline will. I opted to avoid doing a liquor store run and used a nice white, vanilla rum from Hawaii instead. If you’re purchasing rum just for this recipe, I have to be a good Puerto Rican and recommend Barcardi Gold or Black, or Don Q Añejo. 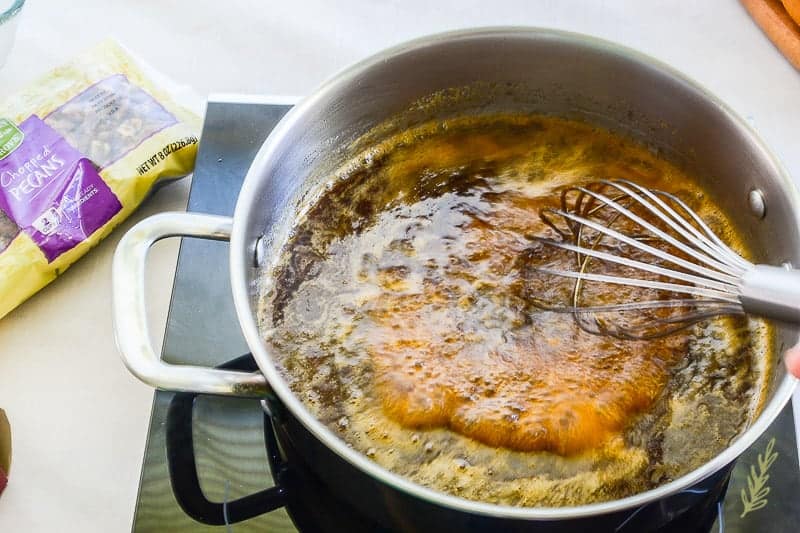 Always, ALWAYS, be careful when adding any liquid to molten sugar. The introduction of the liquid causes the caramel to bubble up quite significantly. Be sure to use a larger pan when preparing this (or any other caramel) to prevent boil over. There’s nothing worse than a sugar burn, trust me, I’m a professional.

Whisk whisk whisk, taking care not to let the sugar splatter on to you. If it does, quickly place your affected body part under cold, running water to stop the cooking of your flesh. And be more careful next time. 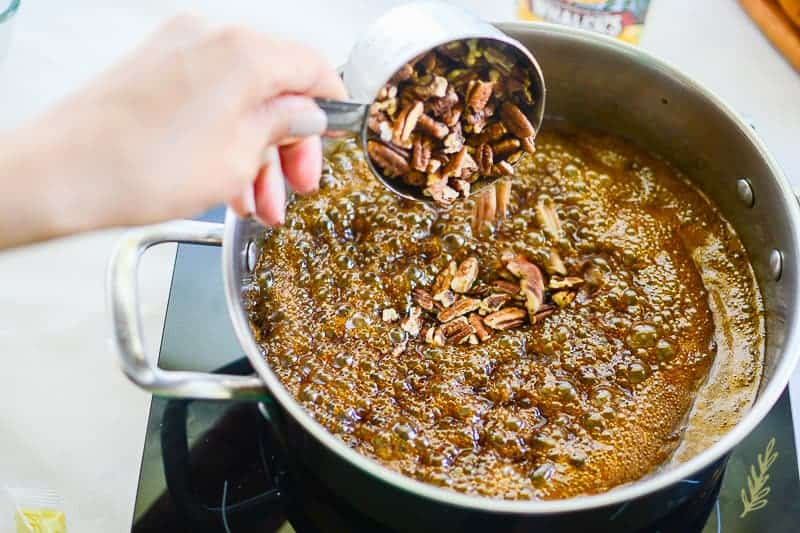 Add the nuts. I like to use pecans because, for some odd reason, I think of pecans when I think of New Orleans. Feel free to use whatever nuts (or none at all) that you prefer. I’d, personally, avoid pistachios or any of the seeds; just because I don’t think they’ll compliment the other flavors. Stir to coat the nuts. 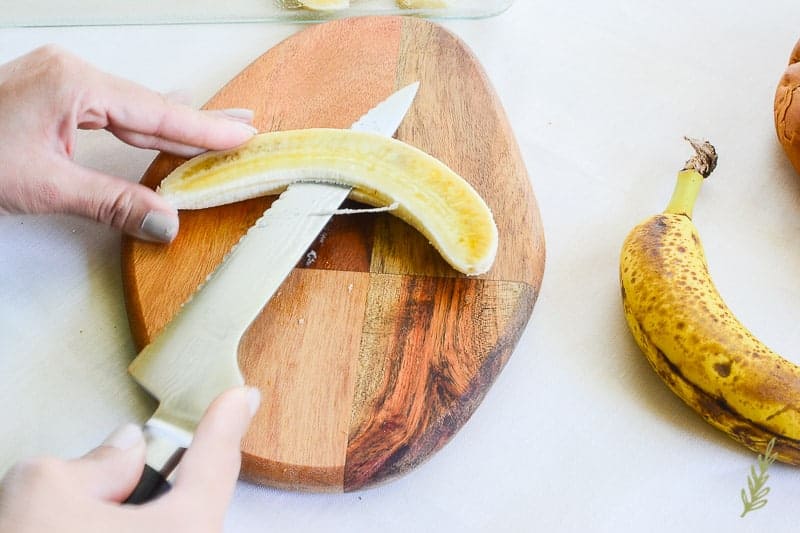 Slice your bananas like so. I like to use a serrated knife, one: because I don’t feel like cleaning two different knives (I use this one to cut the bread too), and two: because it slices the soft bananas easier. Line a casserole dish (that’s been sprayed with non-stick cooking spray) with the bananas in a decorative pattern. 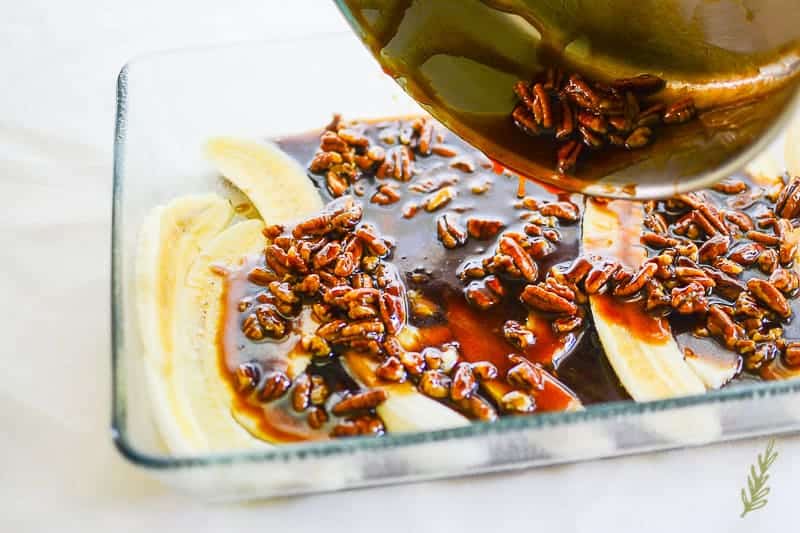 Pour the sugar mix over the bananas and set the pan aside while you slice the bread and make the custard. 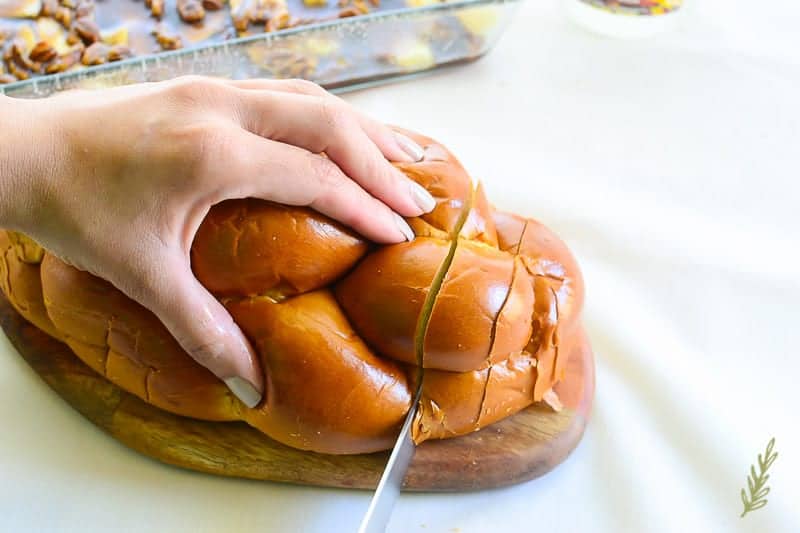 In this recipe I’m using challah, but I use brioche almost as frequently- it just depends on what I have on hand. There’s a fantastic recipe you can find in here. Obviously, if you don’t have either freshly made, you can run out and pick up a loaf at your local food market. Not a big deal, just be sure to use day-old bread that’s staled a bit. Slice into one inch thick slices. Your probably not going to fit your entire loaf in one layer, so feel free to double it up. The slices will soak up the custard nicely if you have stale bread, so that is key! 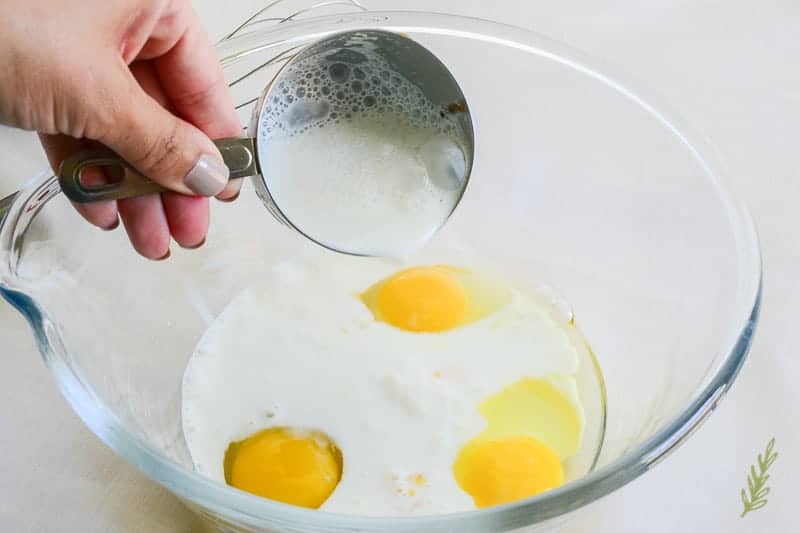 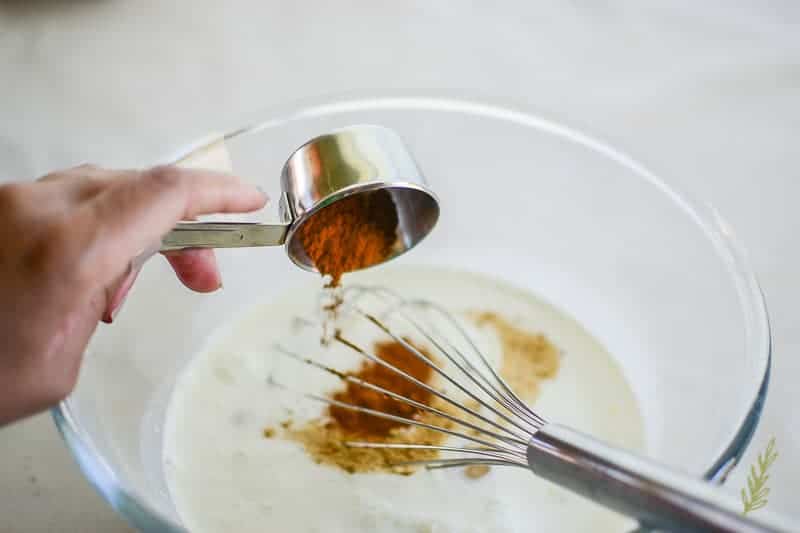 To make the custard, whisk the sugar, eggs and flavorings together with the heavy cream and half-and-half. Make sure you whisk for at least 3 minutes. Not vigorously, or anything, you just want to make sure the sugar dissolves completely. 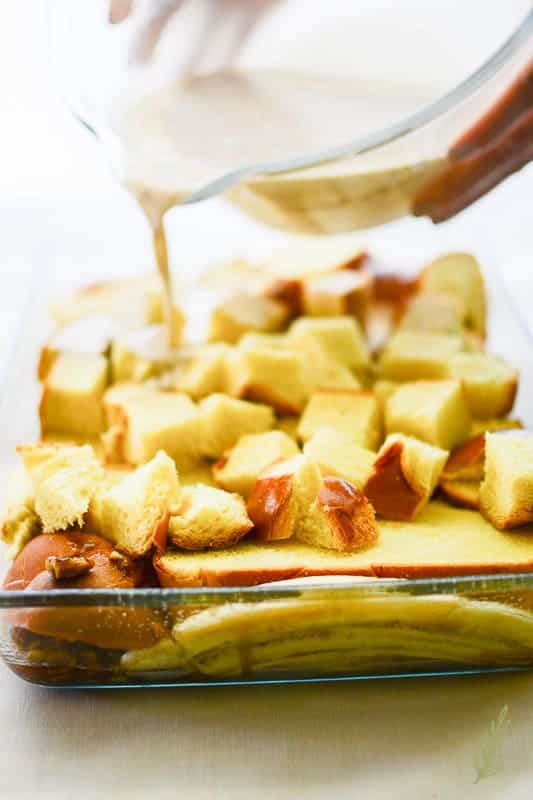 See how I’ve stacked my bread? I even cubed some to chink up the gaps in the first layer. Now pour your cream mixture over the bread and allow it to soak for ten minutes. During that time, put a pot of water on to boil. 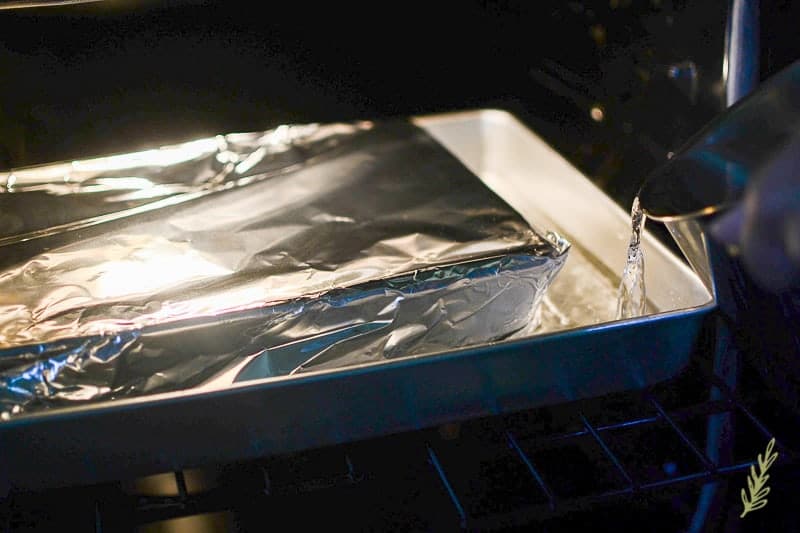 Cover your casserole dish with foil, and place it into a larger baking dish, or, as I’ve used here, a half sheet pan. Once your water has come to a boil, place your pan onto your oven’s rack. Fill the outer pan halfway with the boiling water. This is bain-marie or a water bath. The boiling point of water is 212°F, after that, it can’t get any hotter. Once you place it into your preheated oven, it will stay at a constant temperature and cook your custard evenly. It’s a surefire way to ensure any custard you bake is cooked to creamy perfection. Carefully, place the pan into the center of the rack and bake for 1 hour. After an hour, remove the foil and allow the french toast to bake an additional 10 minutes to brown the top to golden. 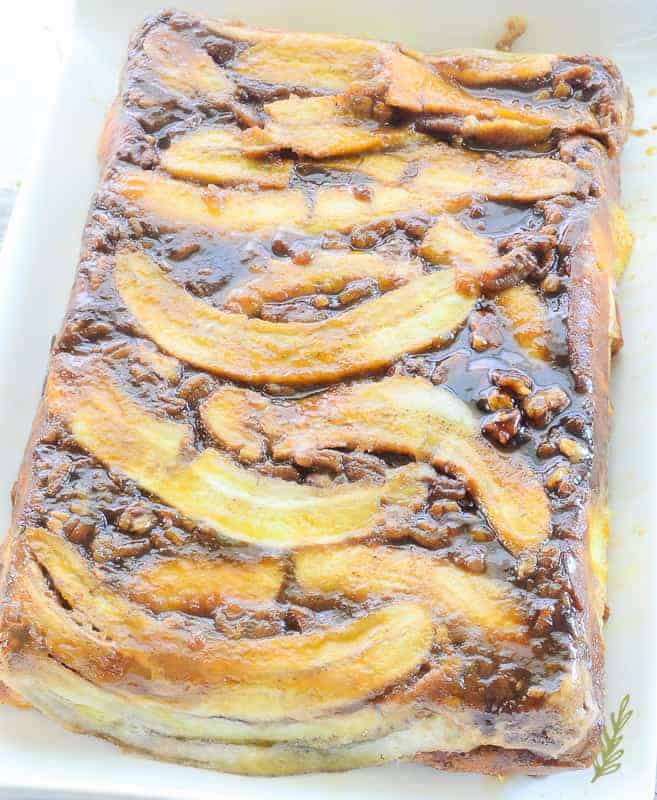 Carefully, remove the pan from from the oven (that water likes to splosh) and allow the casserole to cool for 10 minutes in the water bath. Remove from the water bath and invert it on to a serving dish, or just spoon it right out from the pan. Most of the time, I want people to fawn over my bananas, so choose the former. It’s totally up to you how you serve it. 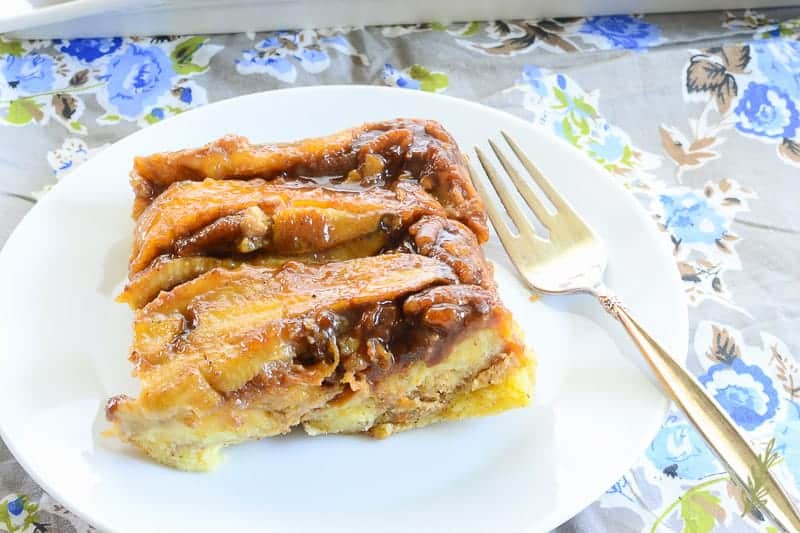 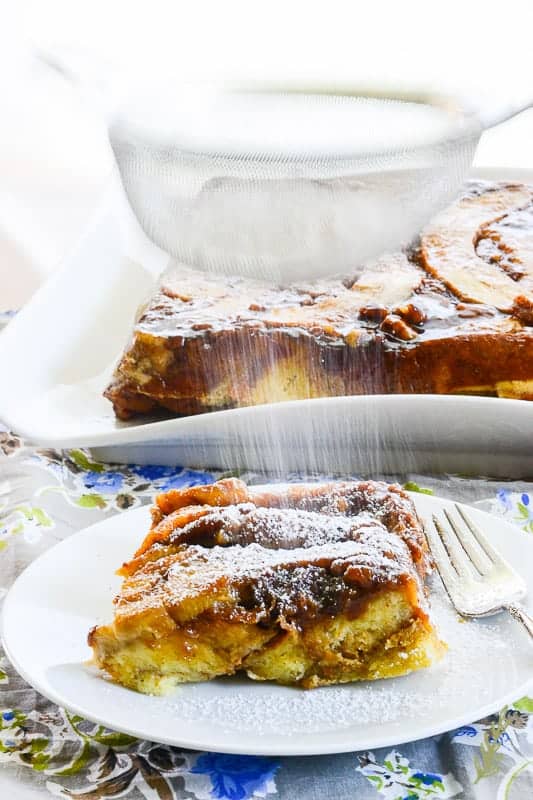 …or with a drizzling of powdered sugar. 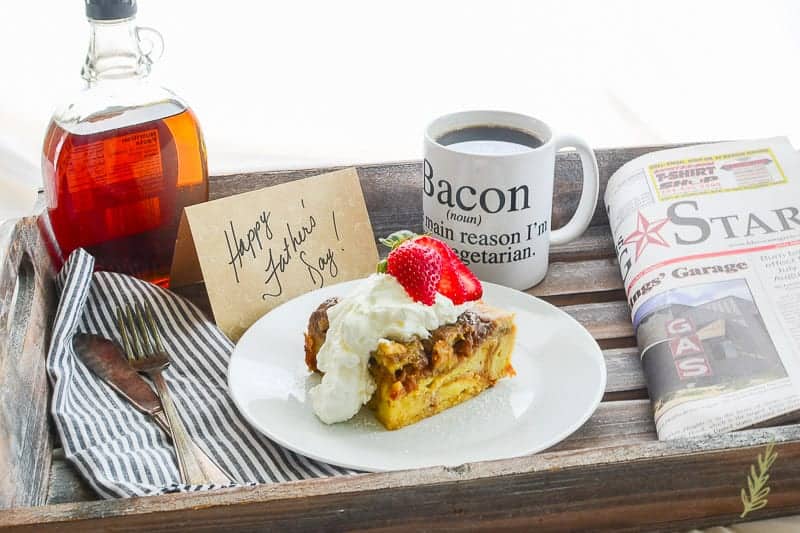 Check out how I typically serve it to His Royal Whiny-ness! So, pin this recipe and make a dish for your next brunch. 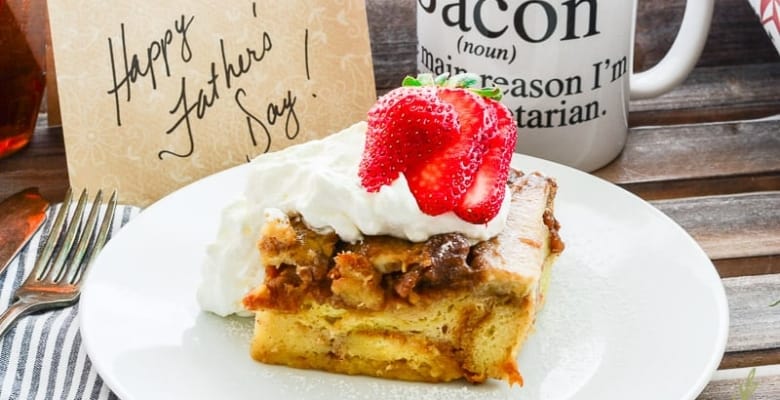 To make ahead: Prepare the topping and add the bread, as directed. Pour the custard over the bread and cover the pan with aluminum foil. Refrigerate overnight. Bring to room temperature before baking. Alternatively, you can preheat the oven with the pan inside the oven to bring it to temperature. Avoid placing a cold glass or ceramic baking dish into a hot oven, as the extreme change in temperature will cause the dish to shatter. Bake as directed.
Course Mornings
Tried this recipe?Mention @senseandedibility or tag #senseandedibility!

And if you like this recipe, I’m sure you’ll love these as well: 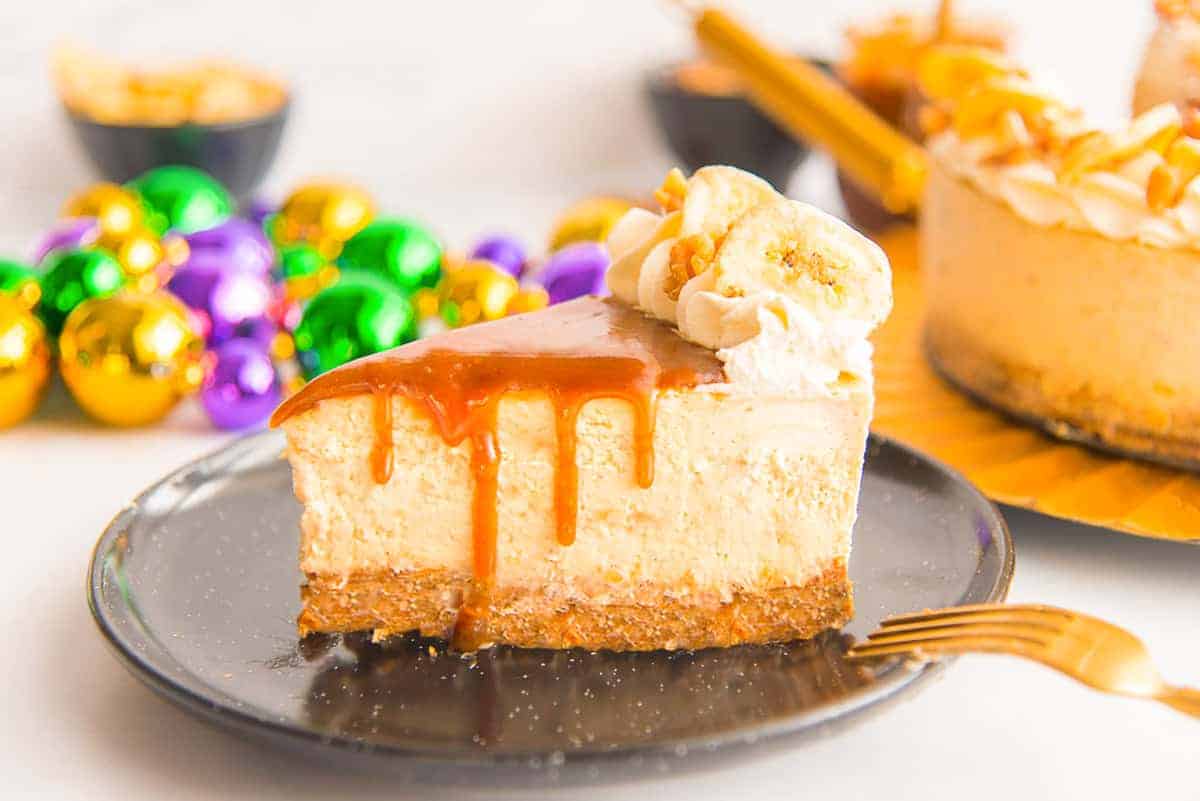 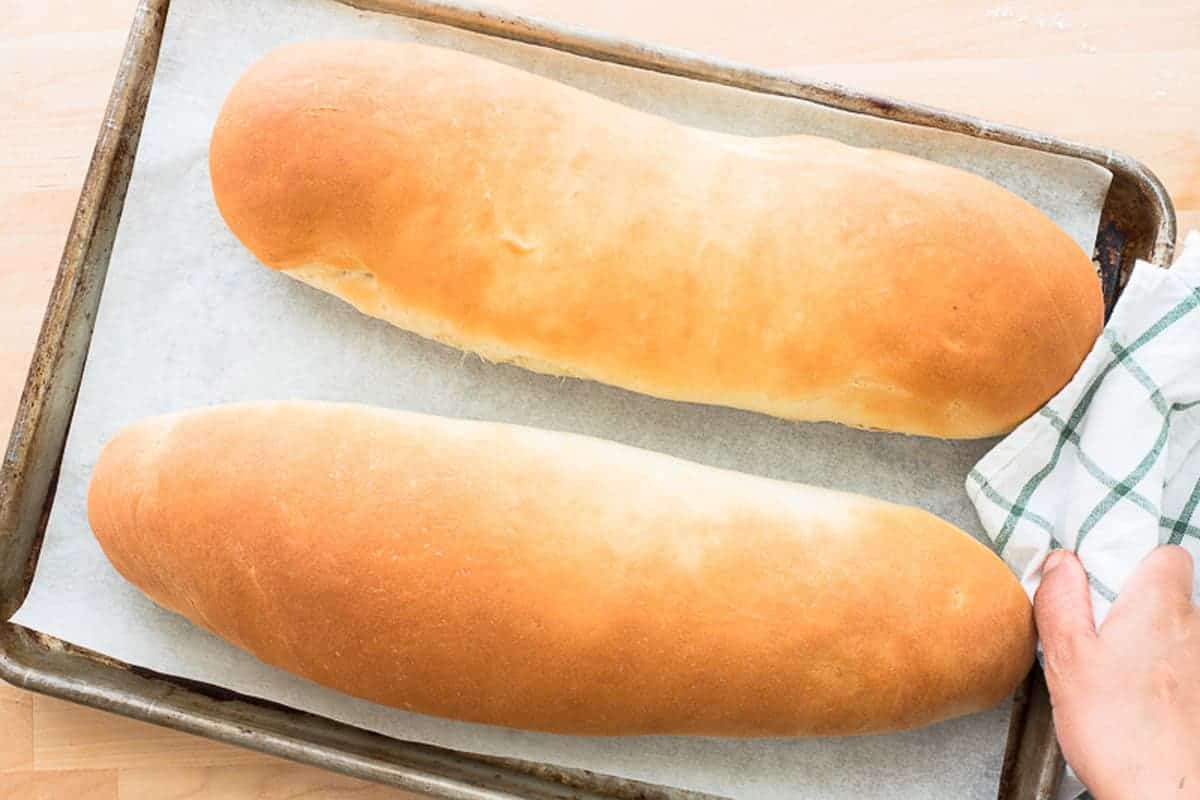 Pan Sobao Recipes You Must Try 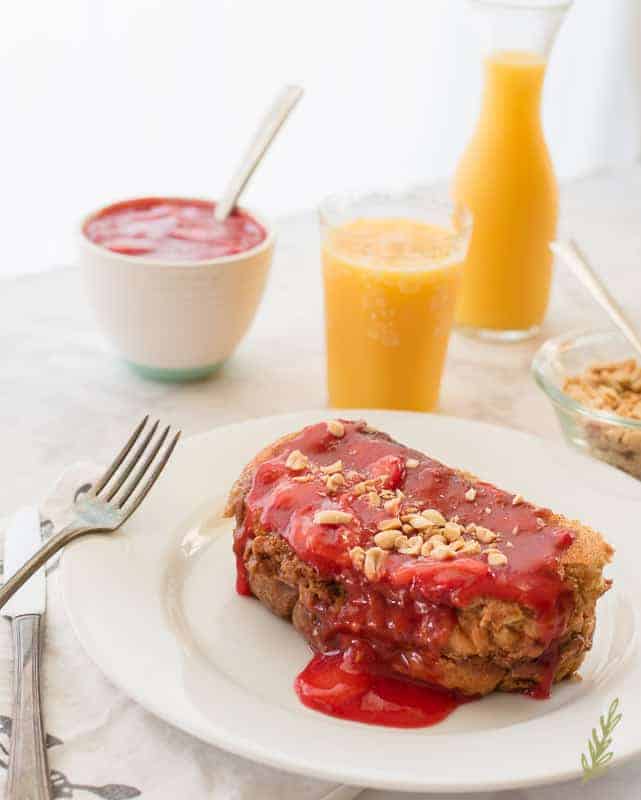 Looks amazing and I enjoyed the entertaining read! 😉

Thanks, Adrienne!! I’m glad you enjoyed it!