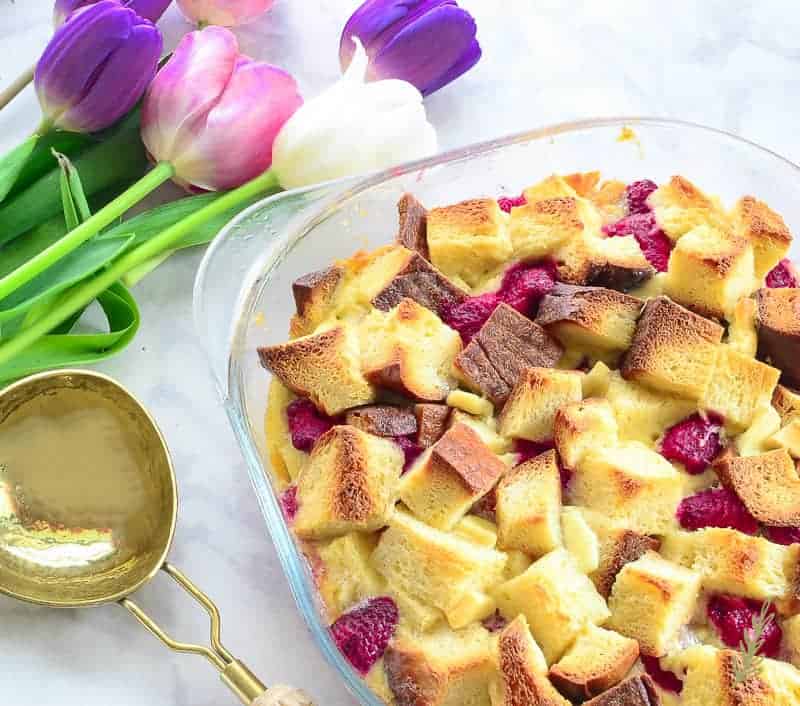 Another Spring has come. We’ve spent three Springtimes here, but only one of those has been with the Soldier. Kind of odd, isn’t it, that I can tell people, “Oh, I’ve lived here for three years! My husband? He’s only lived here for two.” Odd indeed. Bread pudding is odd as well. Drench stale bread in milky eggs and serve it for dessert? Nothing more weird than that. Thankfully, this Raspberry White Chocolate Bread Pudding is the good kinda weird. My kinda weird.

Can you tell I have strong feelings about the stuff?

I used to eschew all forms of white chocolate, turning up my nose at the mere mention of the stuff. I’d scoff at Hector if he dared to suggest any dessert that contained even the slightest trace of it. I’d cringe every time he flaunted his love of white chocolate by lobbing a Zero bar onto the grocery store checkout belt. The “candy bar of abhorrence” is what it should be called. I said it. Alas, there was no use. Hector would smuggle in white chocolate anyway he could. He loves the stuff, contraband be damned, and I just had to deal with it.

One thing Hector didn’t care for, however, was bread pudding. Budín as it’s called in his native Puerto Rico was usually made with raisins (which he loathed) and scented with anise or cloves. I, on the other hand, adored bread pudding- just not flavored the same way. So what did your Royal Pettiness do? I took the bar of verboten chocolate, chopped it up and added it to a bread pudding with some nice, plump raspberries (my fave fruit).

It was genius!!! I took something he loved (and flaunted in my face) and I buried it into something he despised!! It was the classic double-cross. 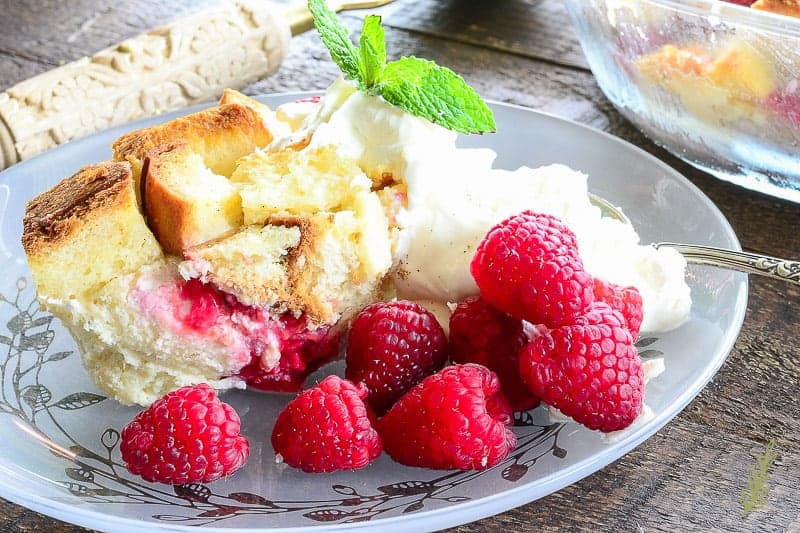 The only issue: I loved it…and he loved it too!!!

Weirdness rears its ugly head yet again. The adulterated chocolate gets a reprieve in my book and bread pudding is salvaged in the eyes of the Soldier. Needless to say I ate crow…but, I also ate Hector’s white chocolate bar so, now!

Bread pudding came to the U.S. from the UK where it was a half-hearted attempt at giving the poor a dessert to indulge in. Stale bread was collected in kitchens and soaked in hot water, squeezed dry and mixed with sugar and spices. Thankfully, mercifully, we have evolved and now mix the stale (day old) bread cubes with cream- or in this case, cream and half and half. We’ve also escaped the suet-laden bread puddings of merry, old England. Can you imagine? “Let’s top off the meal with some sweetened beef fat!” Nummy.

The staler the bread, the better, as it allows the bread to absorb a good deal of the custard mixture. In a pinch, toasting the bread will have the same effect. Bread pudding is commonly made with plain ol’ white bread. Hopefully, you’ve checked me out long enough to know I don’t do “plain ol'” nothing. This brioche I use is rich, buttery, and fluffy…like me. Well, I’m not buttery or rich…never mind. The only breads I wouldn’t use in bread pudding are the heavily flavored loaves like Jewish rye or pumpernickel; sourdoughs also have a distinct flavor so I’d shy away from those as well. Stick to challahs, brioche, French baguettes, or other white breads for the best results.

Once again, a bain-marie (or water bath) is being used during the baking of this custard. As in the case of this cheesecake a bain-marie is used to regulate the temperature of the environment that the custard is exposed to. The boiling point of water is 212°F and because the dish in which the custard is baked is immersed in this water, the custard itself is baked at a very constant, and controlled temperature. This prevents it from overcooking or scorching- a travesty of the highest proportions.

I’ve omitted the ubiquitous raisin that my Spanish forefathers swore by in their bread pudding. First, because I hate raisins, and second, because raspberries, white chocolate and raisins? No thanks. The great part about this recipe is how easy it is to tailor it to your tastes. If you want to switch out the fruits, do so, it doesn’t require much to make this into a rum raisin bread pudding, at all! Sauces like Crème Anglaise which, in laymen’s terms, is the base for vanilla ice cream, usually accompany bread puddings. What I do when I don’t feel like making it from scratch is allow vanilla ice cream to melt and pour it over the bread pudding. I know, I know. I’m a wizard…or lazy, whatever.

Try your hand at white chocolate, I guarantee you won’t hate it folded into this bread pudding; and if you didn’t hate it before, you’ll love it even more. 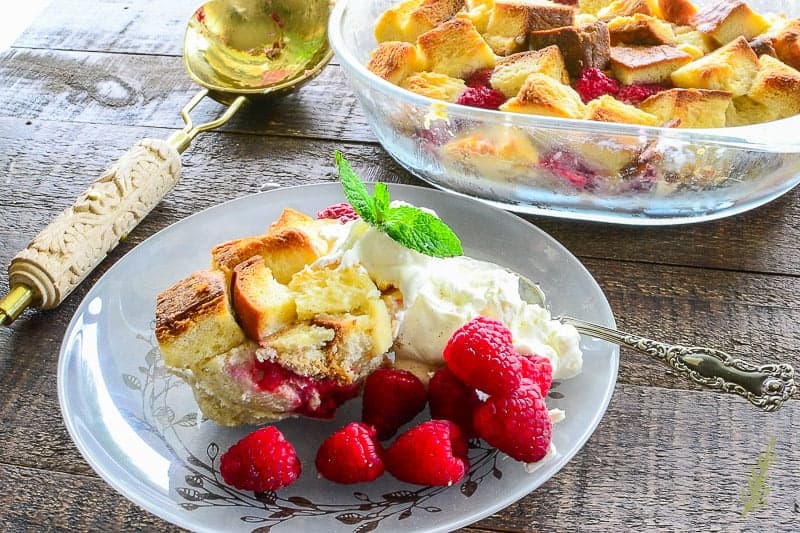 What’s your food aversion? Does your partner share it or love to torment you with it like my beloved? Leave your comment below, I’d love to hear from you! 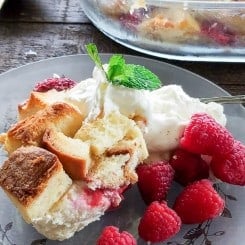 A quick Crème Anglaise can be made by melting your favorite vanilla ice cream! Pour over the bread pudding or serve with a scoop of ice cream on the side.
Tried this recipe?Mention @senseandedibility or tag #senseandedibility!

Try these other decadent desserts: 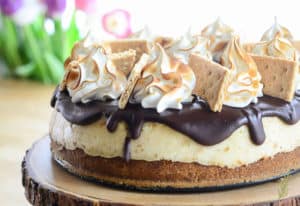 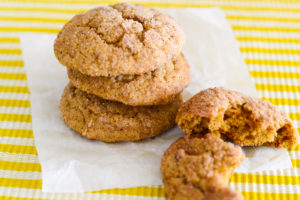 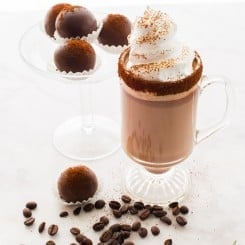 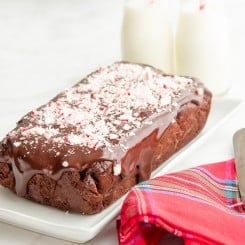 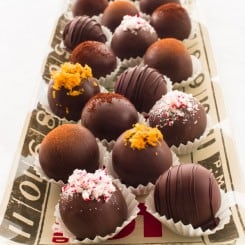 This recipe is AMAZING. I will eat this for the rest of my life! So good and easy-peasy.

Why cardamom? I am not a big fan of this spice. Can it be left out? Other wise this recipe is what I have been looking for.

Why not cardamom? LOL! Seriously, though, cardamom with berries is a perfect flavor combo. Even if you think you won’t like it, there’s no harm in trying it. I suggest always making a recipe as written the first time out. Between the bread, the raspberries, the white chocolate and the egg custard, you’d have to have superhuman tastebuds to be able to pick out a teaspoon of cardamom. If you do hate it, just omit it.

It is pretty doggone divine, Jennifer!

This looks so good! My husband LOVES raspberry bread pudding and I like white chocolate so it would be fun to make this for dessert sometime soon. Thank you for the recipe!

It’s my pleasure! I hope you enjoy it, Shani!

Marta, this looks so good! I love your recipes and your photography, your food always looks delicious 🙂

Thank you so much, Cristina. That really means a lot to me.

I have never had bread pudding. This looks fantastic!

I think is the perfect one to introduce you to bread pudding, Milena! It’s delicious!

This is a funny post for me, because I used to hate white chocolate, and all of a sudden, in the last I don’t know like 3 years or so, it has really grown on me! But bread pudding… ehhh

Oh, I used to feel the same way about bread pudding too! But, this really tastes more like a fancied up french toast casserole.

This really looks amazing. I’ve never heard of this before but I’m sure it will be great for a cheat day.

It would! Of course, everyday is cheat day for me, but I’m okay with that 😉

I feel like crying and I do not know why I clicked on this but I had too. I am allergic to every ingredient minus the raspberries in this recipe but its like I can practically taste everything delicious about it.

That makes me so sad! I’m sorry. Allergies are definitely no fun. I have a paleo strawberry rhubarb recipe coming up, hopefully that’ll work for you?

This recipe looks amazing. Perfect for spring. Thanks for sharing. Your blog and photos are beautiful too.

Thank you, Stephanie! I’m glad you stopped into my little corner of the world!

This is inspirational! I love your blog!

That truly means a lot to me, Lauren. Thank you for stopping by!